Sun and Sand in Phuket

We had a night flight from Bangkok to Phuket on AirAsia that left from the smaller Donmueang Airport (DMK). Forest and Thibault met us at the gate as they had just flown into BKK from Paris and had to rush to make it to the airport in time.

It was 1 1/2 hours to Phuket and we arrived about 10:30pm. We then picked up our rental car and drove what was suppose to be about an hour to the southern most town of Rawai. Unfortunately it was quite dark, there were few if any street lights or signs, and no one we stopped to ask seemed to either understand us or know where we were headed. We finally found the Modern Thai Villas and thank goodness they were even lovelier than we had hoped for! 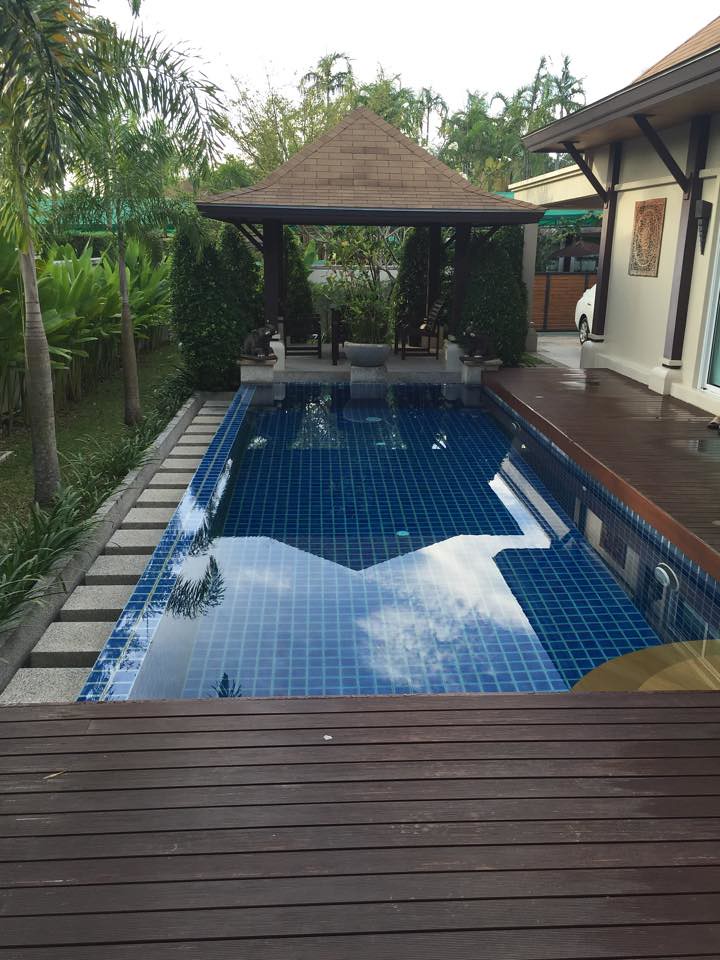 Our villa was in a little community, each one gated and fenced off for privacy. The house was an L shape with two spacious bedrooms and ensuite bathrooms at either end, and a big living room and kitchen in the middle. Outside was a beautiful lap pool and covered gazebo. Breakfast was included and was held just across the street from our villa, buffet style featuring both Thai and American style options. There was also a mattress store and buses of Japanese tourists arrived daily to shop at it. We never could quite figure that one out.

After a morning swim we drove to the area of Chalong Pier to explore and have some lunch at Fon Fon restaurant, randomly picked but very good. We just got a peak of the long boats coming in from the bay and of the Big Buddha on the hill before a huge storm came through. I am talking monsoon style rain storm. 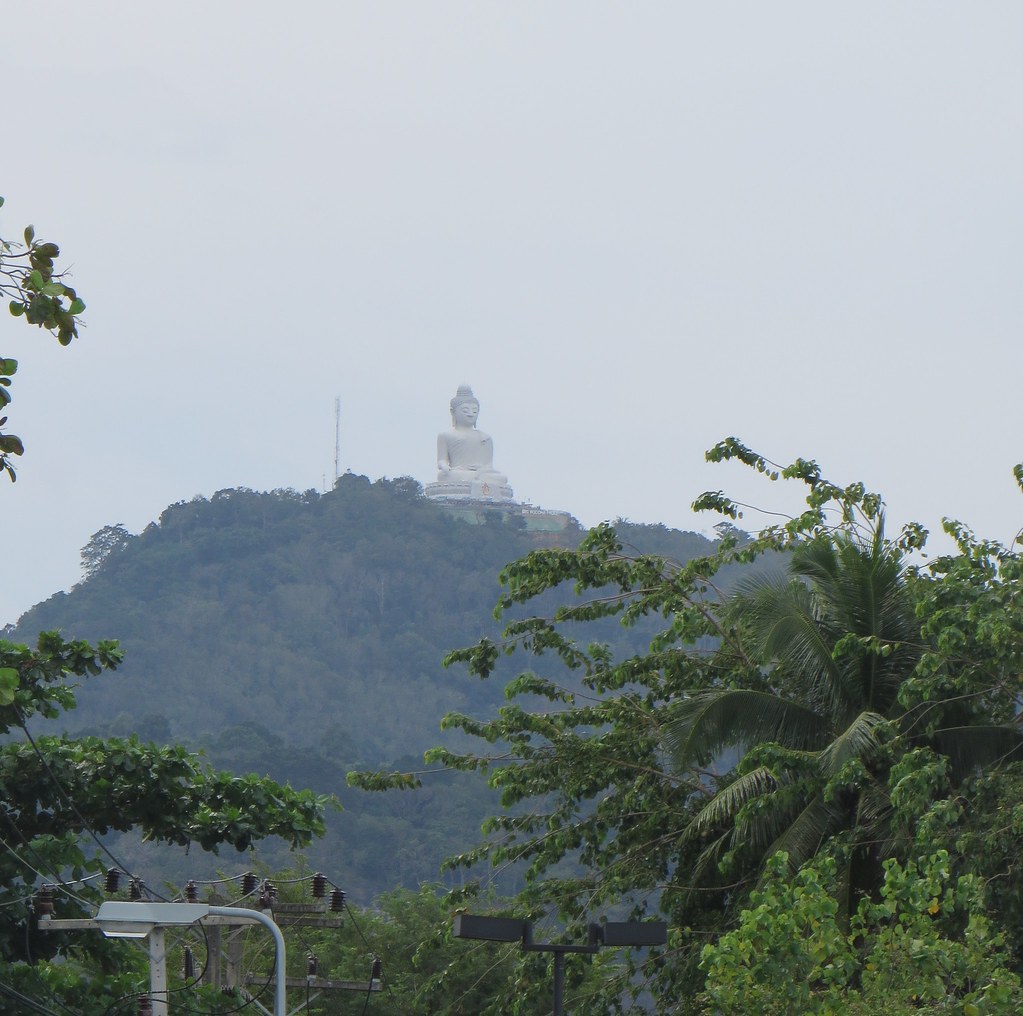 We took advantage of the weather to do a big shopping trip at the local grocery store Tesco. Grocery shopping is one of my favorite things to do in foreign countries as there are so many things that I see and have no idea what they are, as well as the way stores display their items can be disturbing to say the least. Like this meat section where it was just out in the open and you scooped up what you needed. Pass. 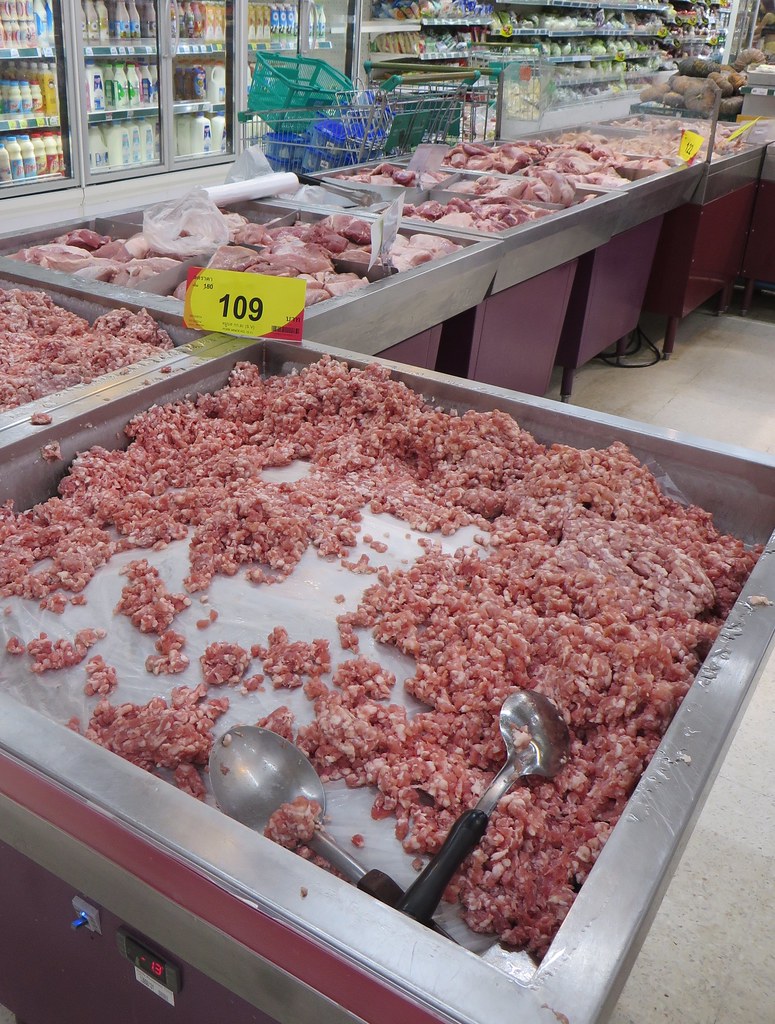 Booze, snacks, and pool toys acquired we headed home, waited out the storm, had aperos, and headed to the Rawai Beach area for dinner. Toes in the sand, breeze off the ocean, outside on wooden tables and benches. Perfect.

We spent the next few days doing what you do on Phuket; we sunbathed and went swimming in the warm lovely waters of Nai Harn and Kata beaches. We explored the Gypsy village and fish market in Rawai. We took in sunset at Phromthep Cape lookout (along with a couple getting their wedding photos).

Forest and I had hour long foot massages every chance we got. We visited the Chalong Bay rum distillery. We swam in our pool. We had lunch on an uninhabited island and celebrated New Years Eve.

And of course we ate lots of delicious Thai food in all sorts of environments.  In Phuket Town we had dinner at the modern fusion restaurant Suay which was ok but not a must visit. In Rawai we had beautiful green mussels and green papaya salad with raw crab al fresco at Nikka restaurant. We also had a fantastic dinner outside at Sa La Loi farther down on the waterfront, some of the spiciest dishes were here! 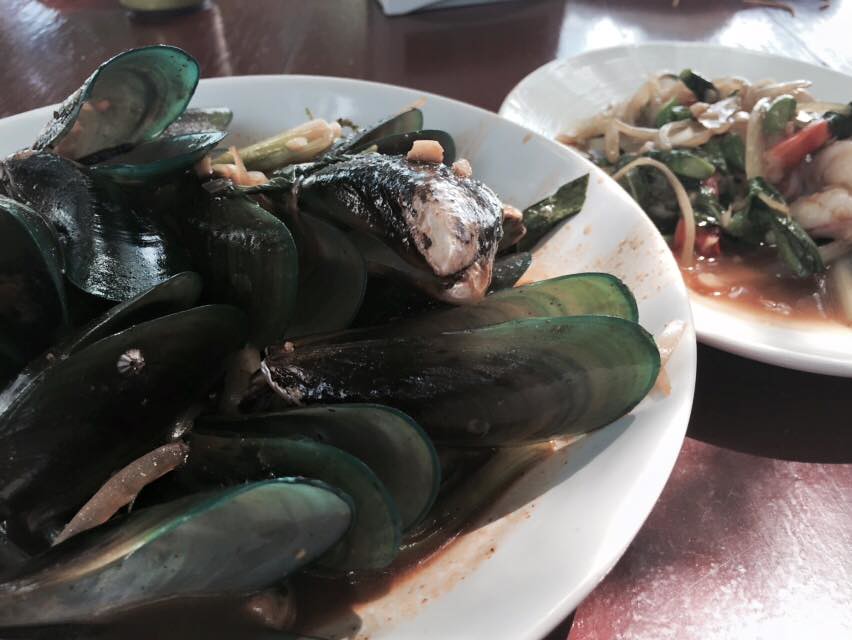 We had an incredibly unique lunch near Chalong Bay at MoMu Dong, a collection of private and communal huts set over mud flats. Even with one of the very few English menus we really had no idea what we were ordering but our server helped us the best she could and we had a phenomenal meal. This was some of the most authentic regional cuisine we ate. 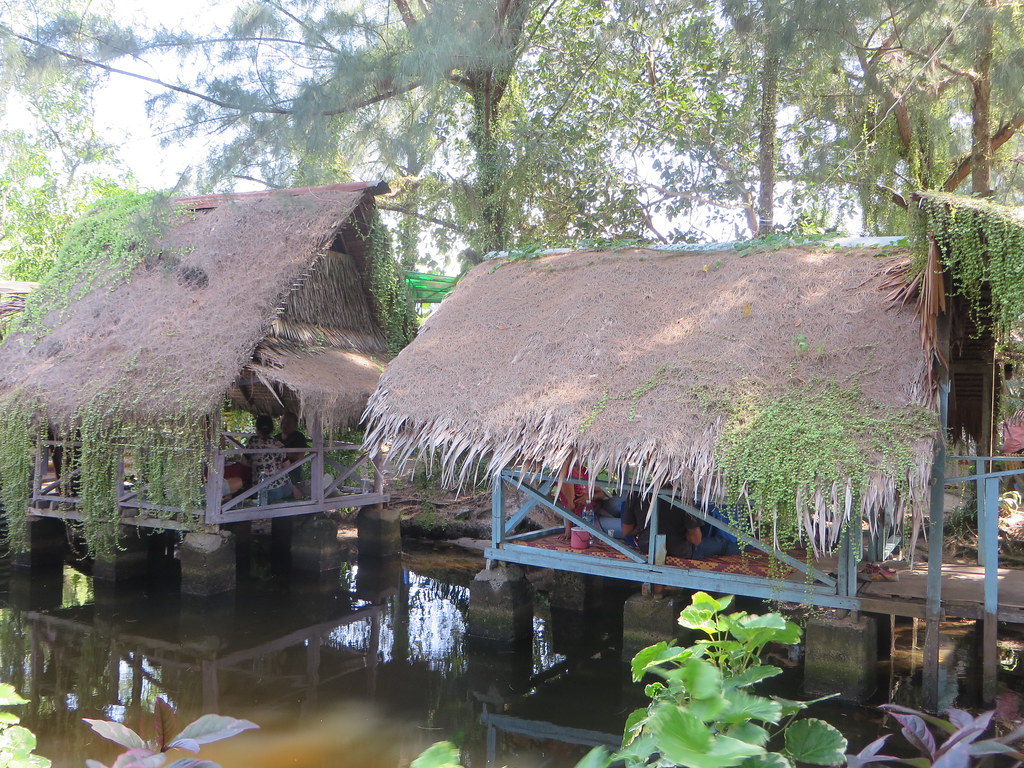 We also discovered the incredibly delicious banana roti (or pancakes) served with condensed milk and sold by street vendors. Heaven.

On our last full day on Phuket we booked a tour through Asian Dolphins to visit the famous Phi Phi Island area. The trip was an 8-hour excursion that included multiple stops.

It didn't start out well unfortunately as they never showed to pick us up. I get a little cranky when I have to be ready for something at 7:30am and then it doesn't happen. After some tense phone calls we hurriedly drove ourselves to the marina and just made it in time. They did comp us each 5% off the price.

We took a large speedboat out to our first stop Pi Leh Lagoon, about an hour and a half trip across the bay. The limestone cliffs that circle the lagoon are incredible. And the color of the water was just amazing. And the number of other boats and tourists made me wish I had visited this area about 20 years earlier. 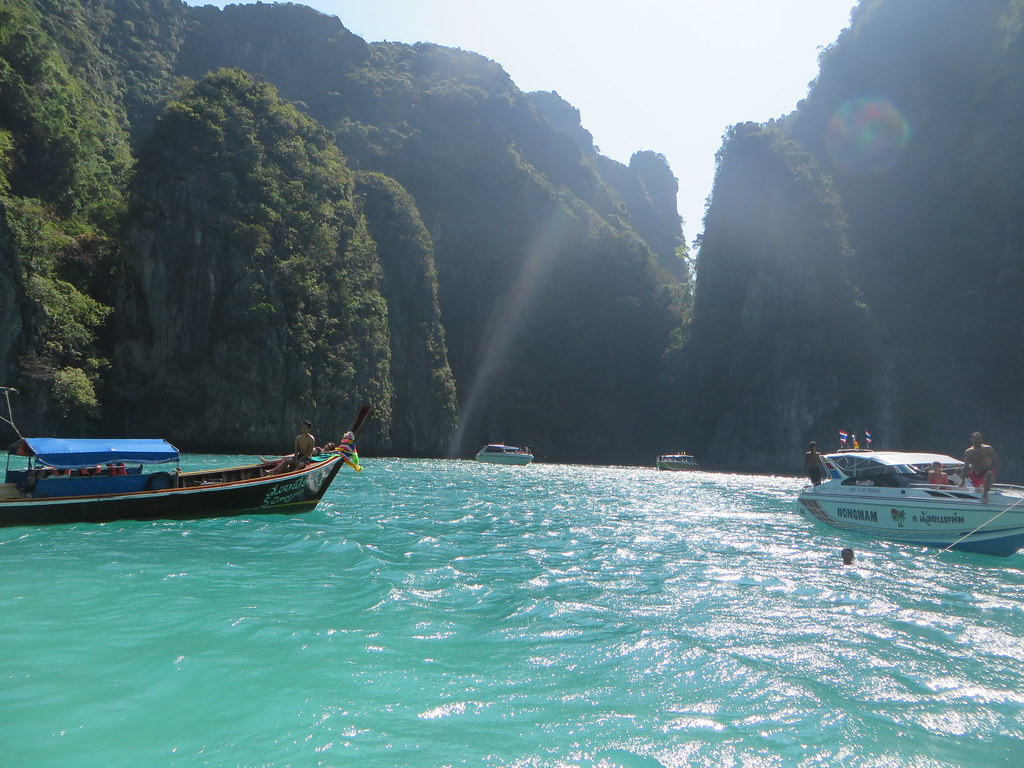 We all jumped in and had some time to swim around and enjoy the scenery. Photos really do not do any of these places justice.

Next we headed to Maya Bay, this is where "The Beach" was shot and tourists flock to it. In fact when we arrived there were so many tourists on the beach that no one could sit, they were all just packed on it, standing. Our driver offered us the choice to head to a little different spot where we could enjoy some beach time which we all happily agreed to! 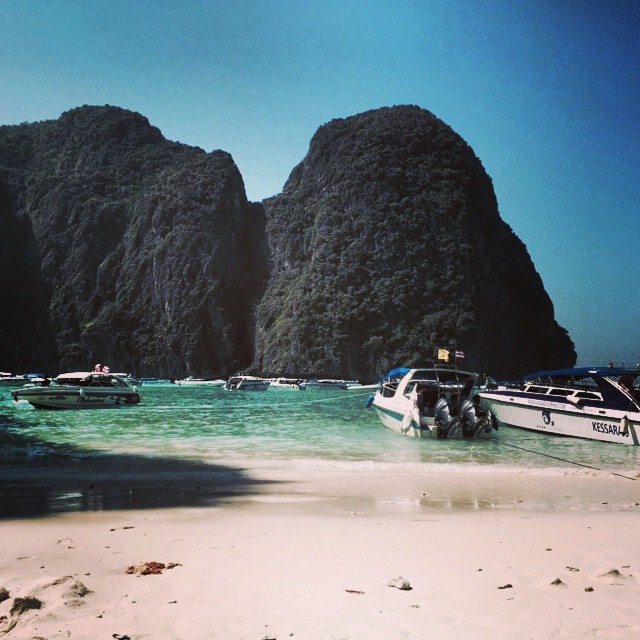 Next stop was Monkey Island and just as the name implies the place is over run with monkeys. They were funny and cute to watch, which is way more than could be said for the tourists who fed them sugary drinks and people food instead of fruit just to have a "funny" picture. 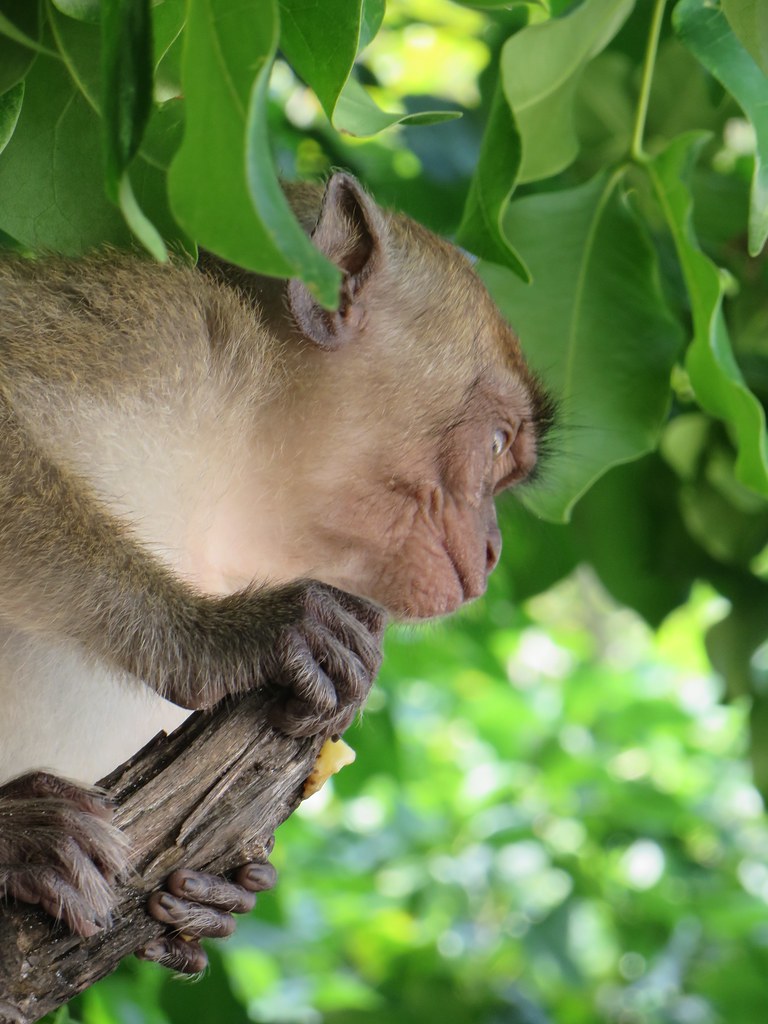 We continued to pass beautiful rock outcroppings and small islands as we headed towards Phi Phi Island for lunch. We stopped just outside for some good snorkeling; warm water and lots of fish. Lunch was a big buffet set up for all the tourist boats, nothing even remotely unique or authentic. We finished quickly and grabbed a drink while taking in the view. 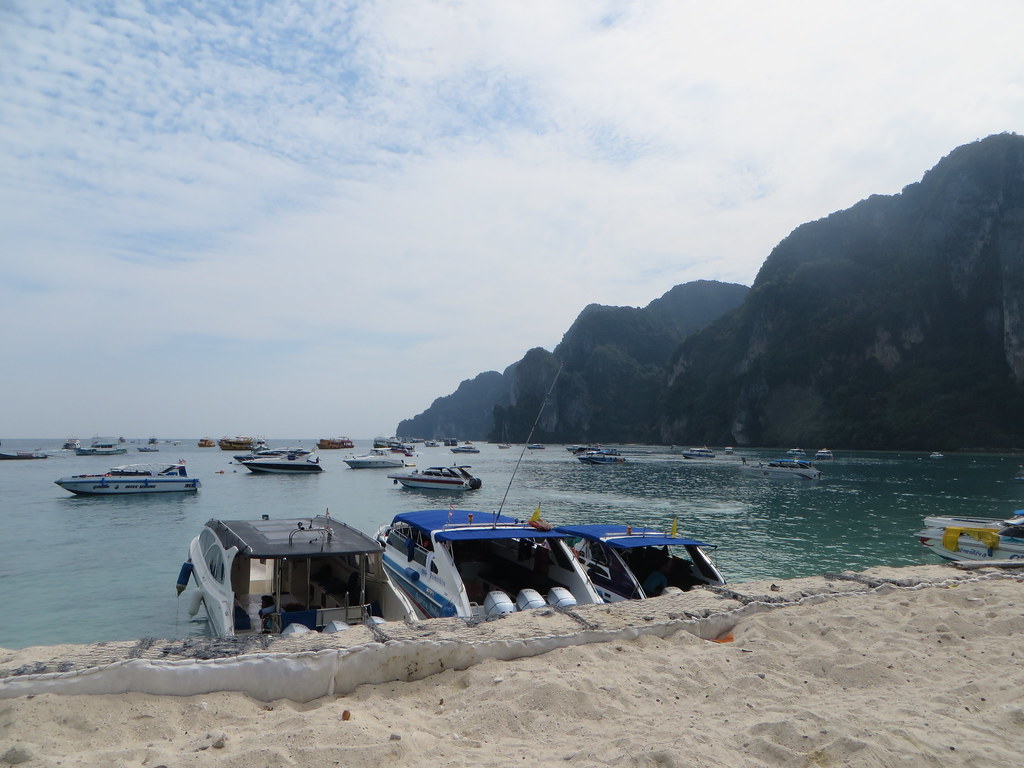 Our last stop of the day was to Bamboo Island for more beach time. It was a lovely beach that wasn't very crowded. Although the water was warm and gorgeous there was too much coral and it was too shallow to snorkel. But it was perfect for a sand siesta! 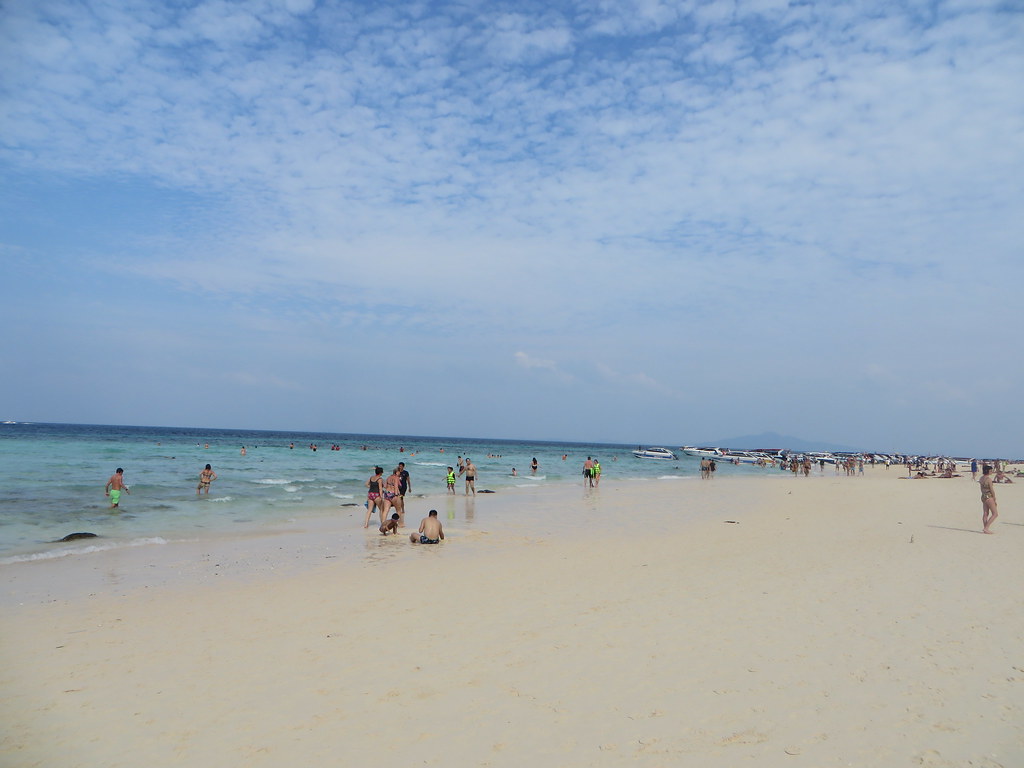 It was a full day and the sun was getting low in the sky as we headed back to the marina. We drove home to our villa in Rawai to pack, make some pool drinks, and take a last swim. That night we ordered dinner from the resort and it ended up being up there with some of the best food we had had in Phuket! An added bonus and a great way to wrap up our time on the island. 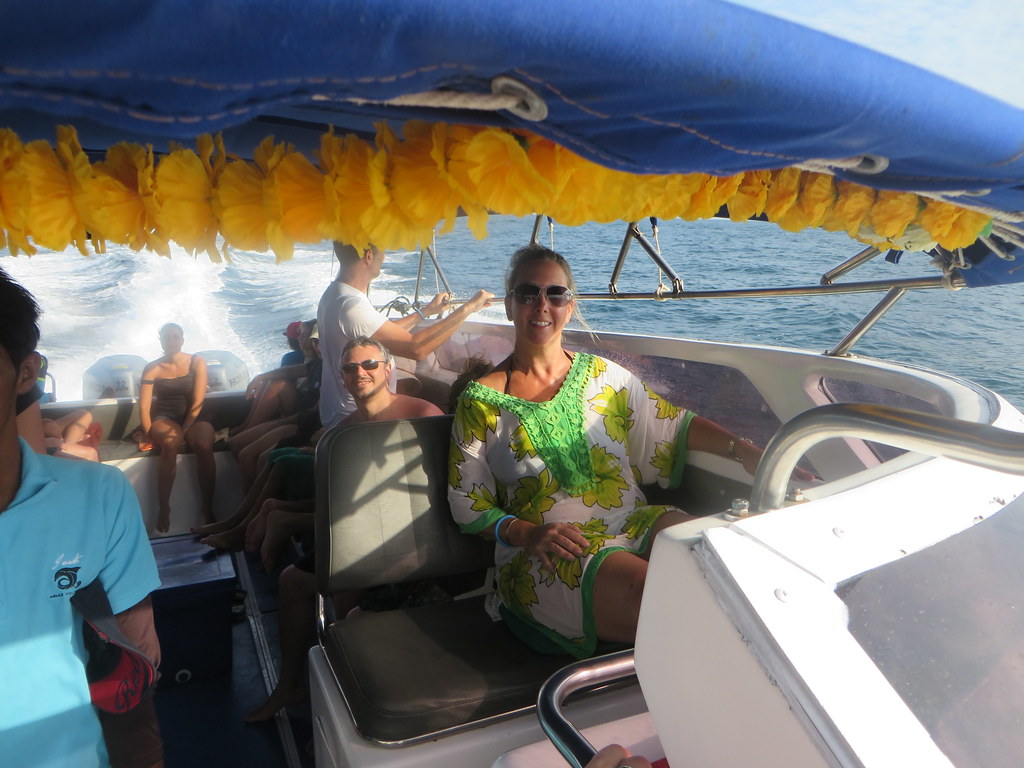