Elephants and Tigers, Oh My!

We left the beaches of Phuket and flew north to the hills of Chiang Mai. Just a 2-hour flight but a world away as far as the terrain goes. On the flight I had Khao Soi served from the flight attendant's cart, it was surprisingly good which made me even more excited to eat it in the city which is known for it. 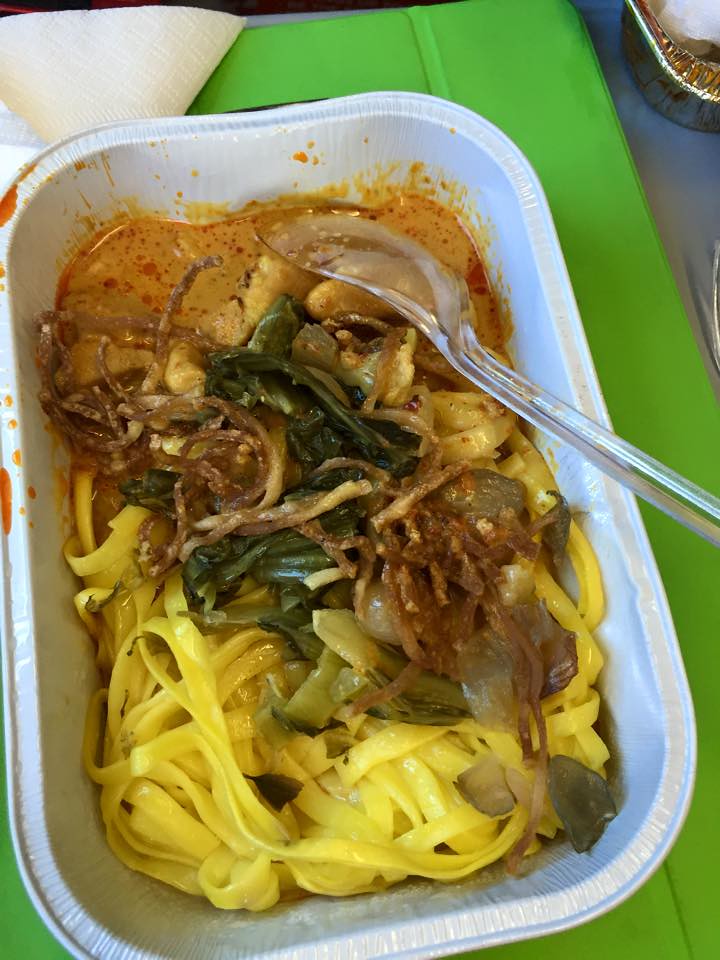 We took a cab from the airport to the 3 Sis Hotel, this hotel is in a great location for exploring Chiang Mai. There is a beautiful, airy lobby, breakfast is included at the connected cafe (which also has a great patio perfect for drinking beers on), and the rooms are clean and spacious, if a bit on the basic side. The Sunday Market sets up on the street right in front, it's a HUGE street market with everything from clothing, live music, touristy stuff, and of course food. Lots and lots of delicious food!! 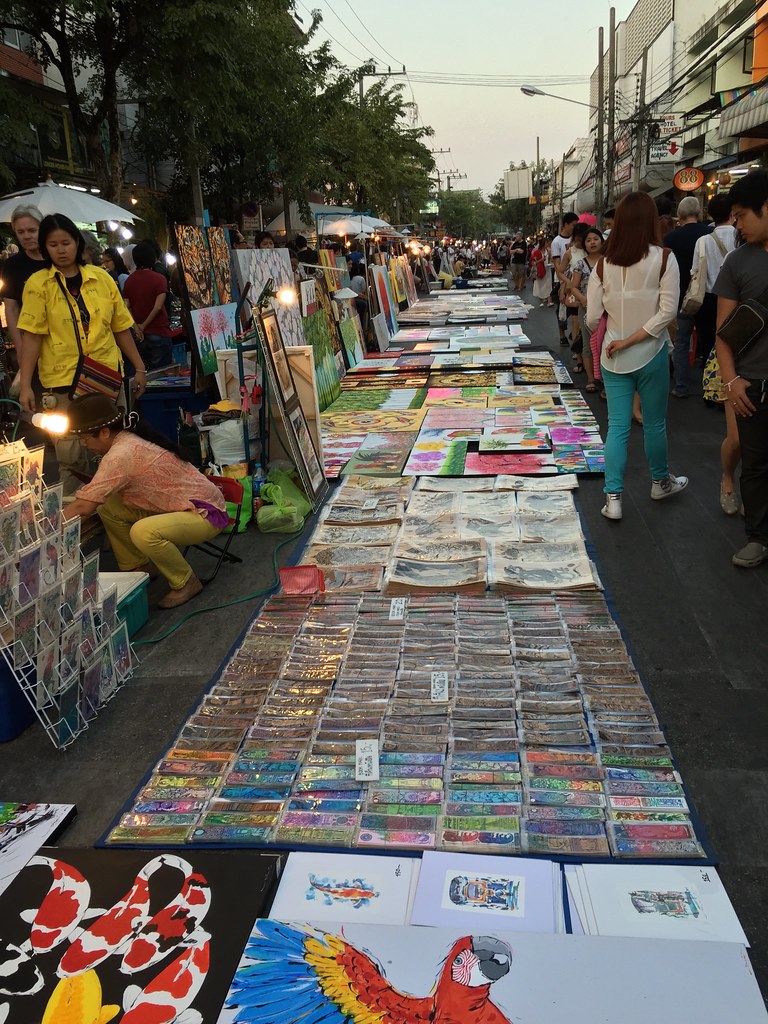 Of the three night markets we went to-- Wualai Road Saturday Market, Sunday Market, and The Night Bazaar-- my favorite was the Sunday. Whether you go to one or all, you will see a lot of the same stuff but they each have a different vibe. And each of them had outdoor massage chairs so Forest and I could continue with our hour-foot-massage-a-day routine. 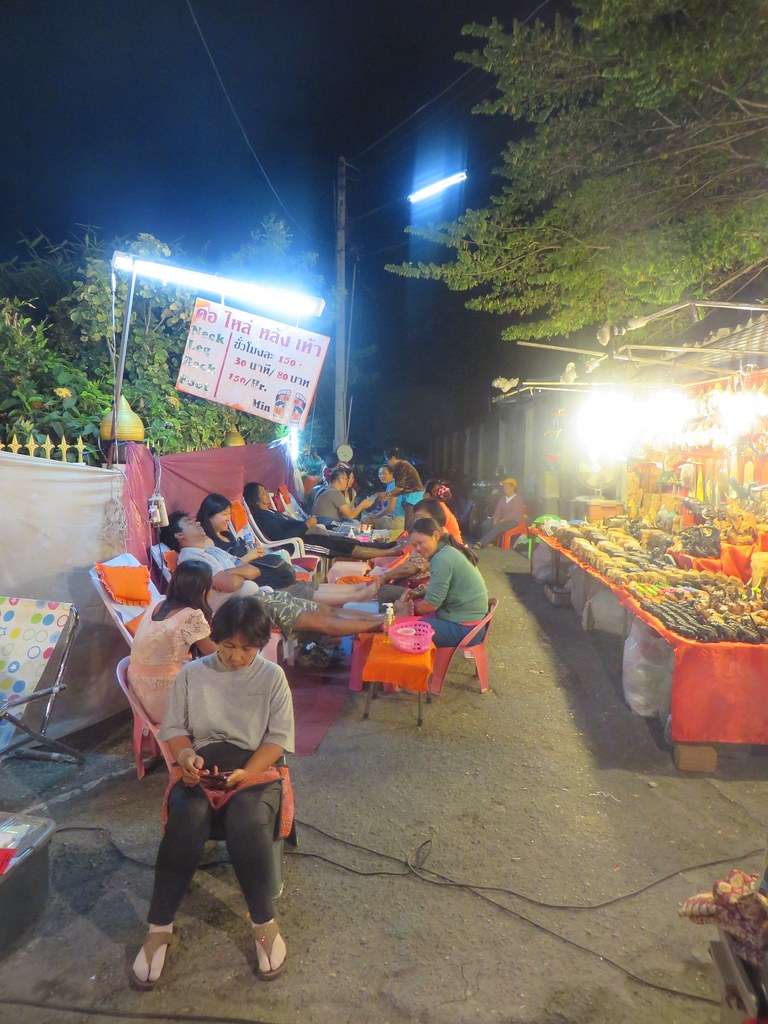 The two main ways to get around in town (besides walking of course) are tuk tuks or red trucks. Both should be negotiated before riding! In red trucks you just climb in the covered back where there are bench seats. It may stop and pick up others along the agreed upon route as you go. Tuk tuks can be a bit dangerous for four people as someone will have to ride up front next to the driver, where there may or may not be a seat, as Thibault found out one night. He had to perch precariously! 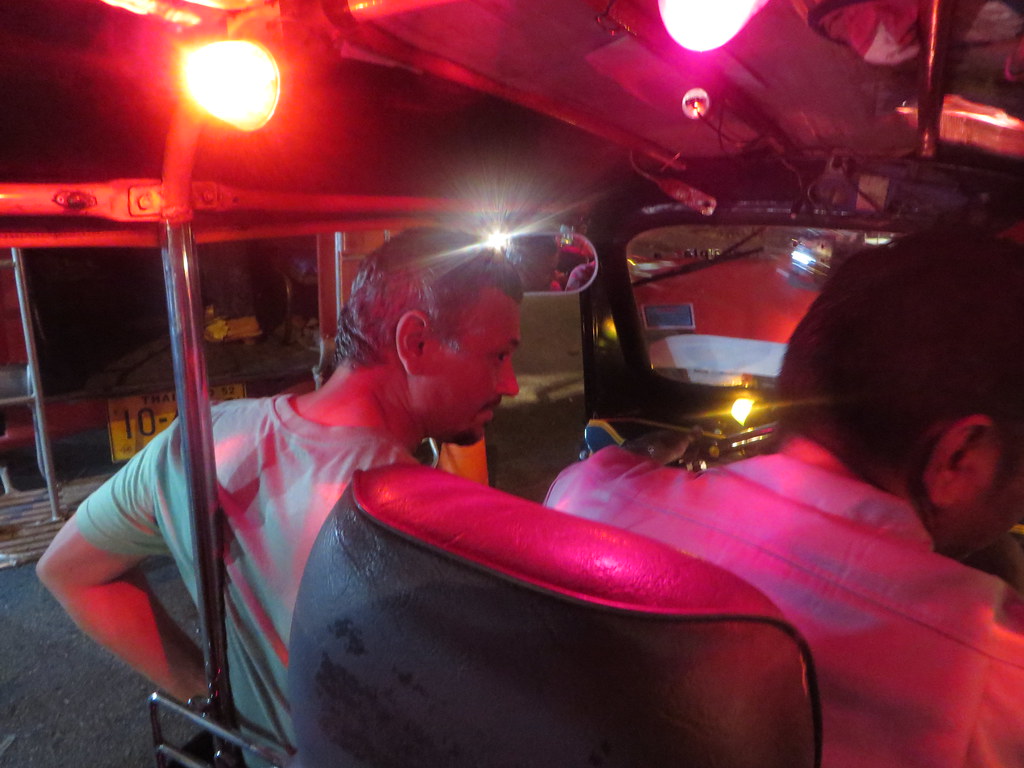 Chiang Mai has a lot of wats (temples), monks, and Buddhas. The wats are everywhere with many of the locations having multiple temples. Sometimes it is hard to figure out which was which. We visited quite a few; 6 of the most well known ones. You remove your shoes before entering and make sure shoulders are covered and well as your legs to the knees. 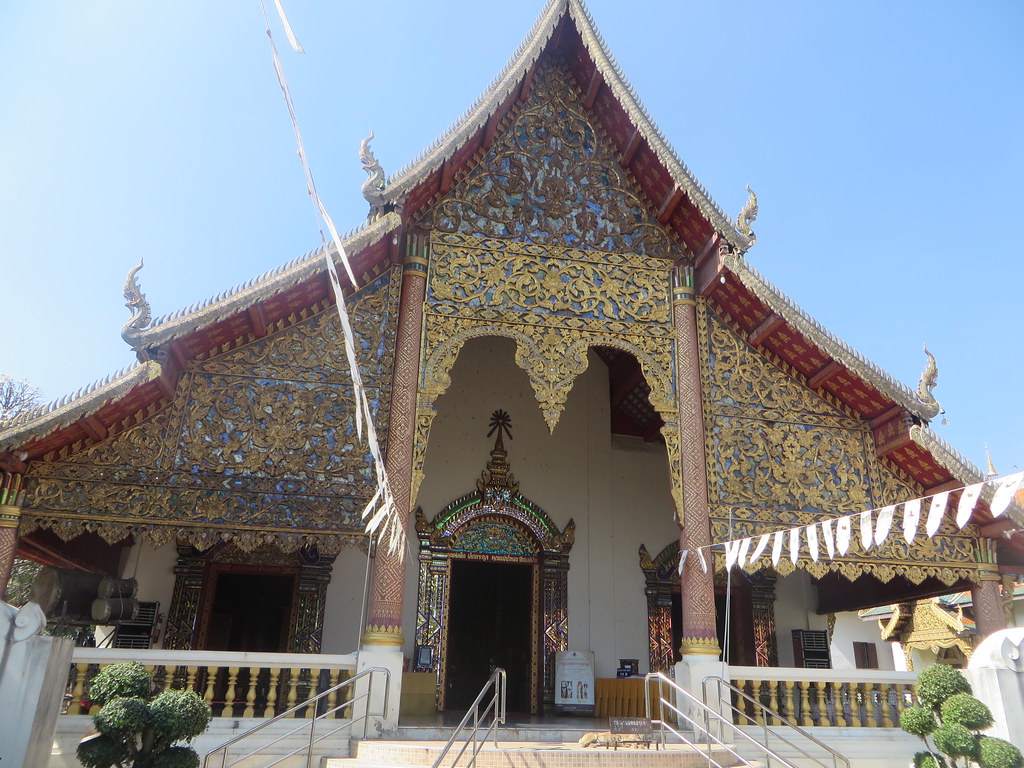 There are Buddhas housed in wats and others that are outside. There are huge ones, reclining ones, crystal ones, ugly ones, the list goes on. 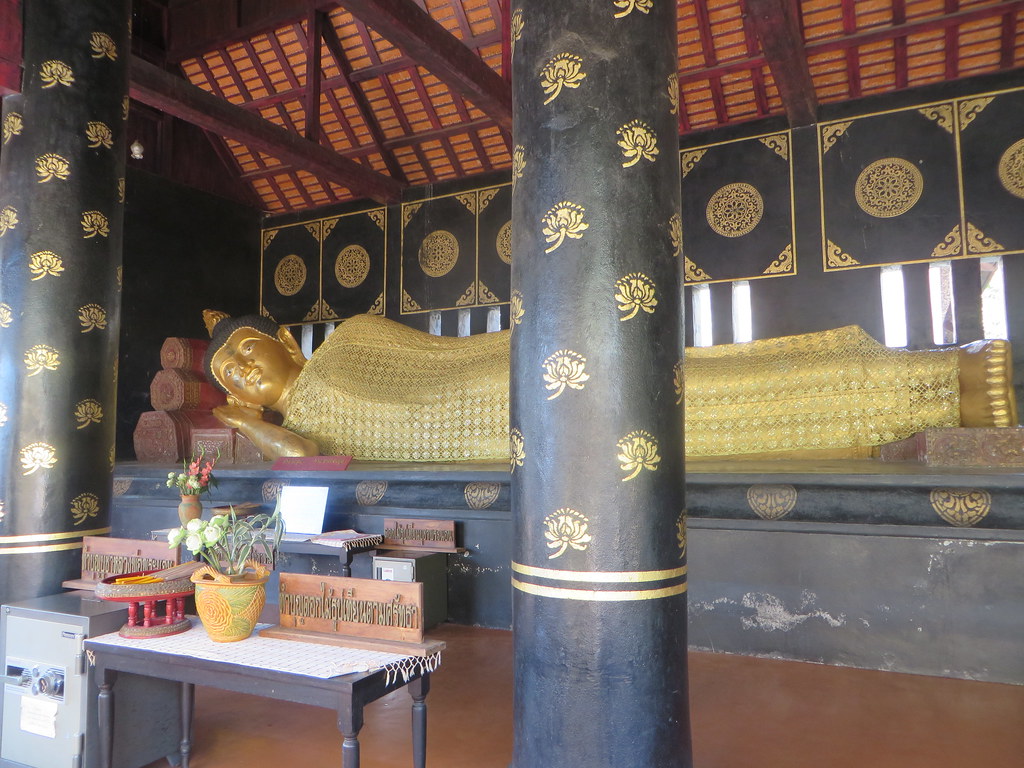 The temples were mysterious places to us, there are so many ways that people are worshipping; leaving money, paying for gold leaf and affixing to a Buddha, buying ribbons, leaving food. We even saw at least one wat that did not allow women! 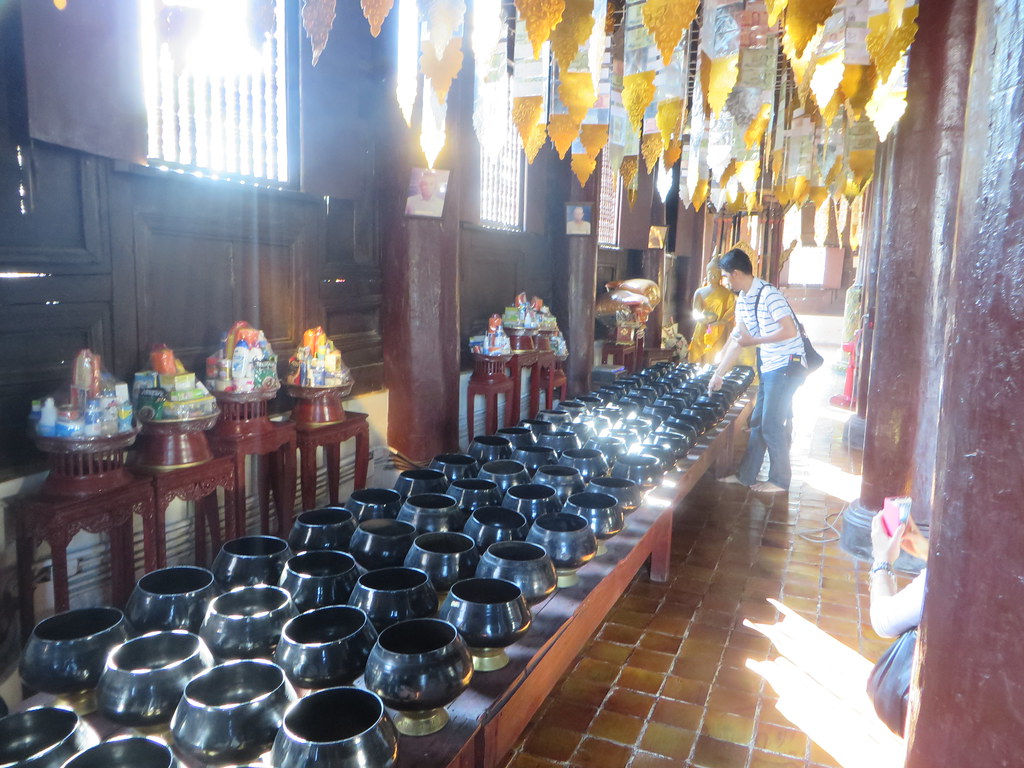 And then there were the statues of monks, some so realistic they look like they had been mummified. Who knows, maybe they were!! 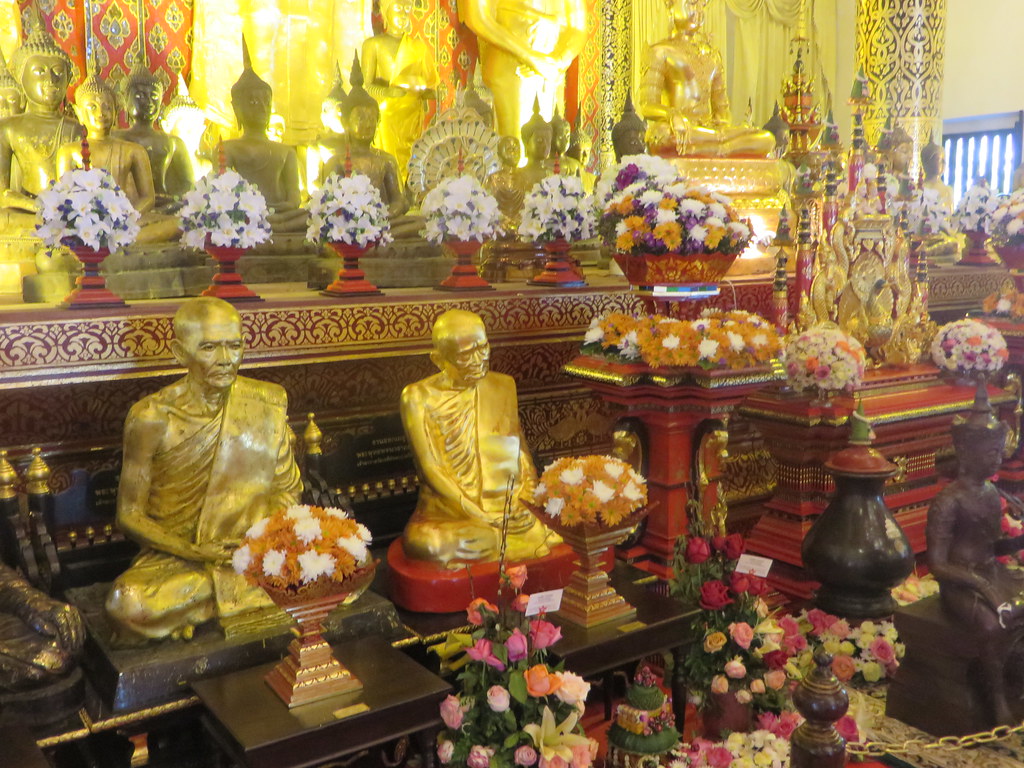 Next to Wat Chedi Luang there is an area called Monk Chat where you can sit and talk to the monks, we didn't do this but it seems like it could be interesting. And the only way women would be allowed to interact with monks. 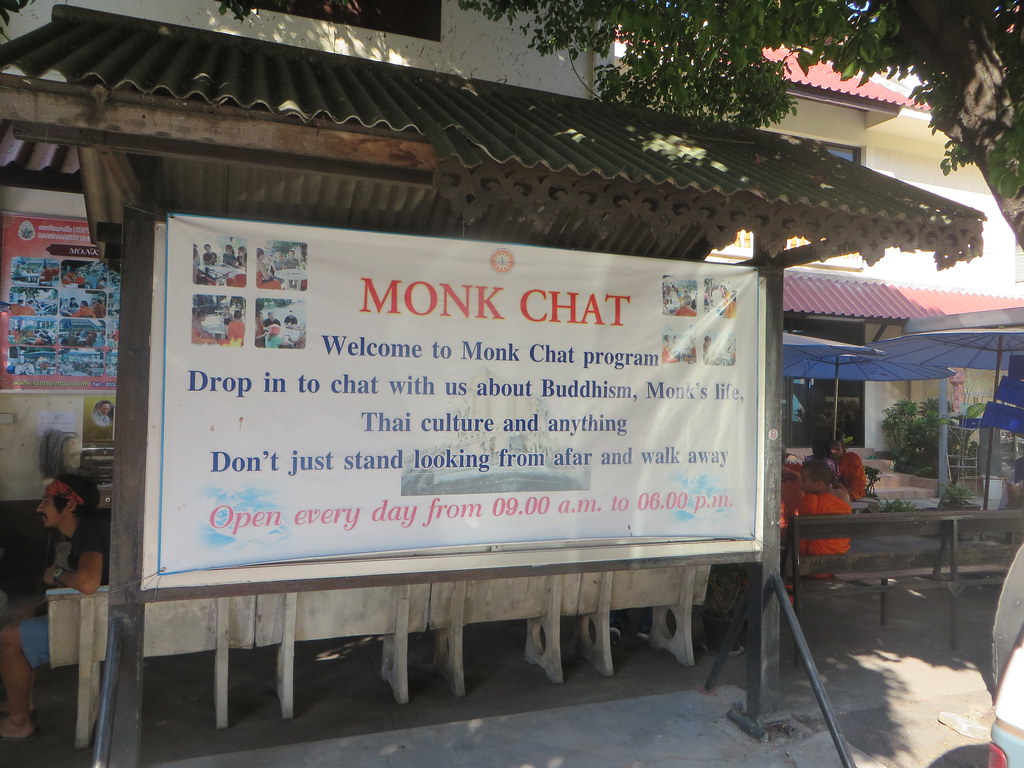 It seems that everyone who goes to Chiang Mai takes a cooking class and we were no exception. We booked a half day course with Thai Kitchen Cookery Center, which included being picked up from our hotel, a trip to a food market and then cooking instruction, and lunch of our dishes. We each got to pick different items to make and then taste them all which was fun. Although we all had a good time, and got a cute little cookbook to take home, I don't think any of us thought it was a 'must-do' on limited time. 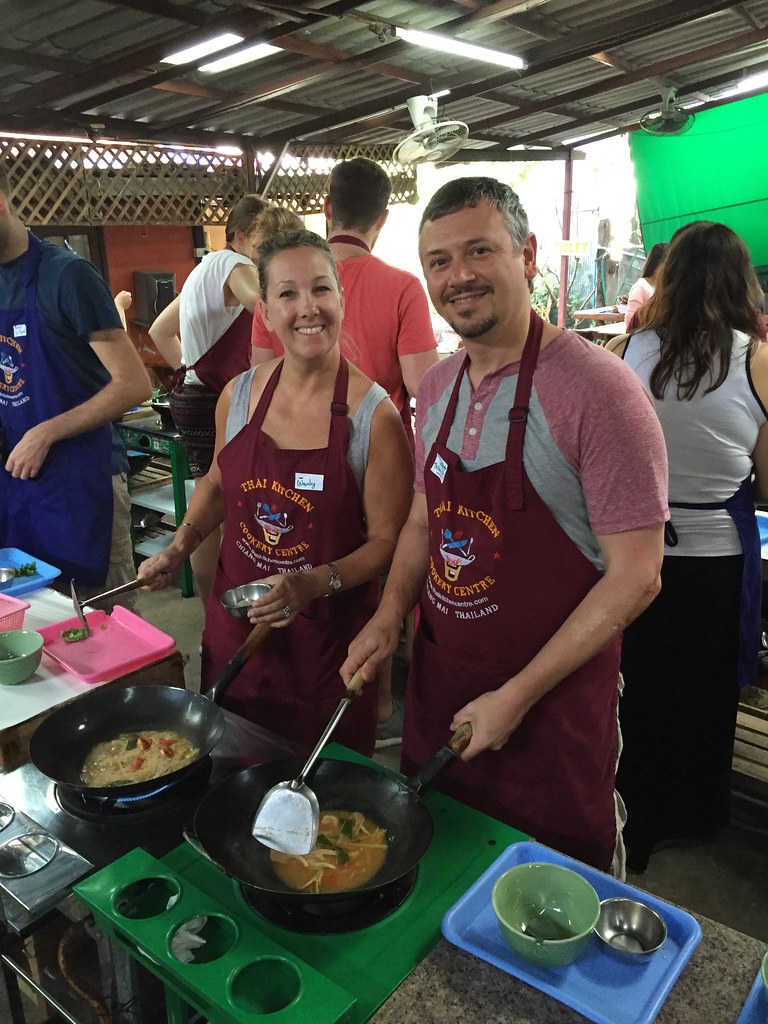 Our favorite day in Chiang Mai was the day we had booked with Blue Elephant Camp. We did a lot of research on excursions as we were really interested in interacting with the elephants but we didn't want to spend time at a camp where they are treated badly, forced to put on a show, worked by people who weren't concerned about elephant welfare, etc.

We were picked up before sunrise and had quite a long drive north towards the mountains (the camp is actually quite close to the boarder of Myanmar). Right at sunrise we stopped at a large food market to pick up things for both ours and the elephant's breakfast. Our guide was great as he also showed us many fruits and vegetables that we weren't familiar with. 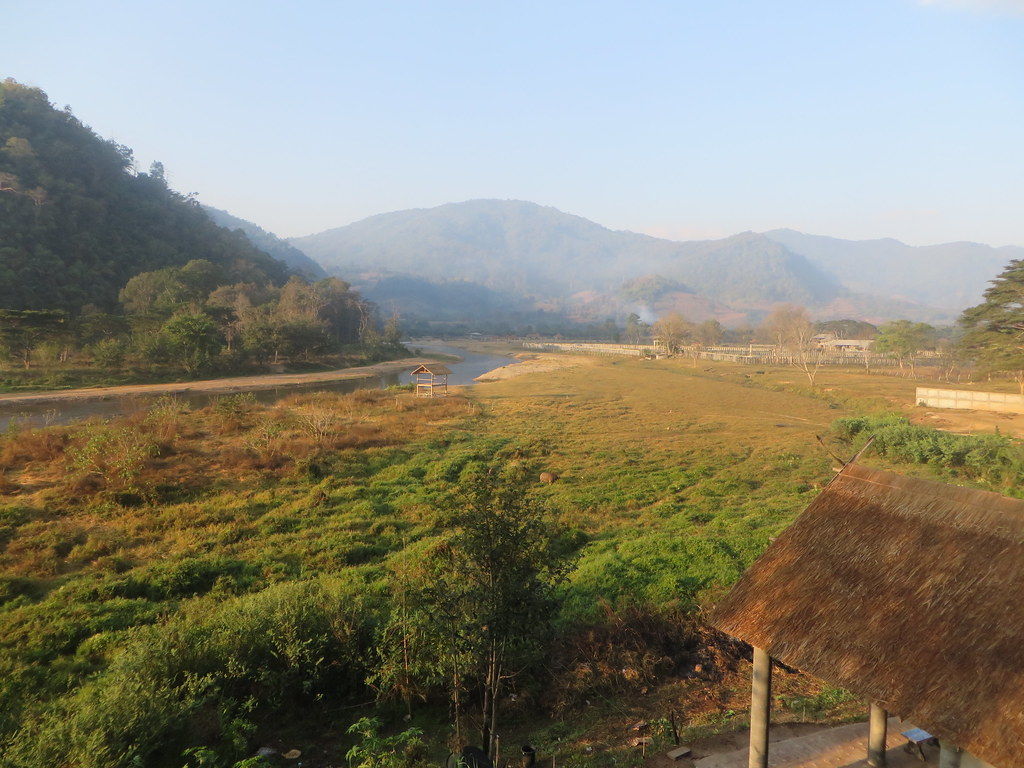 After a quick stop for coffee (thank god!) we continued on, finally arriving in the most beautiful river valley. We changed into our mahout outfits (elephant trainers) and while eating fried chicken and fruit had a lesson in giving elephant commands in Thai. Blue Elephant works with different camps and we were at Bobby's Elephant Home. The owner of the camp was very serious about us being able to command the elephant with words, the handlers here did not use hooks on the animals. I can not recommend this camp more highly. It was amazing! After our breakfast we were introduced to the elephants and fed them in order to get them familiar with us. Our guide took our cameras for us so that we could enjoy the experience but still get great shots. 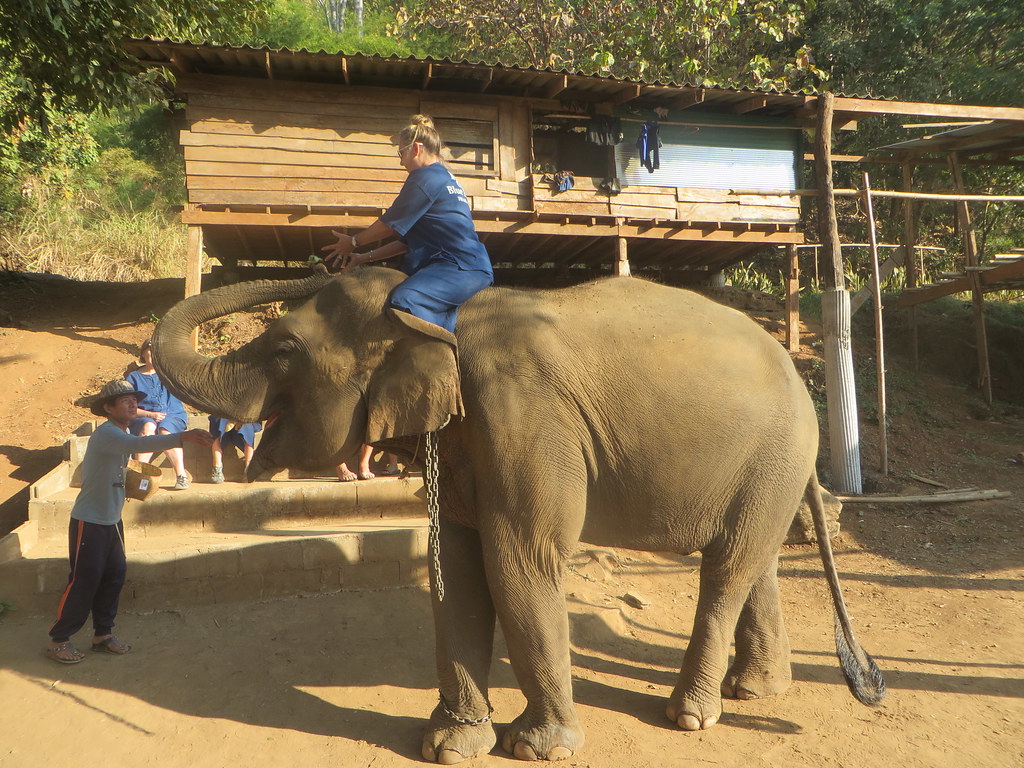 After class we rode the elephants for a while, through a river and some forest land. I'm not gonna lie, it is not the most comfortable way to travel! On our way back through the river we got to bath them, which was fantastic!

After we returned to camp we had some refreshing coconut water and fruit and then fed the elephants the leftovers (they love whole tamarind pods and also will crack a coconut in their jaws!). We had some more photo ops and also got to hang out with the pregnant elephant, who we could watch the unborn baby moving around from side to side in her belly! Finally we said our goodbyes and thanked the camp owner who you can see really loves his elephants! 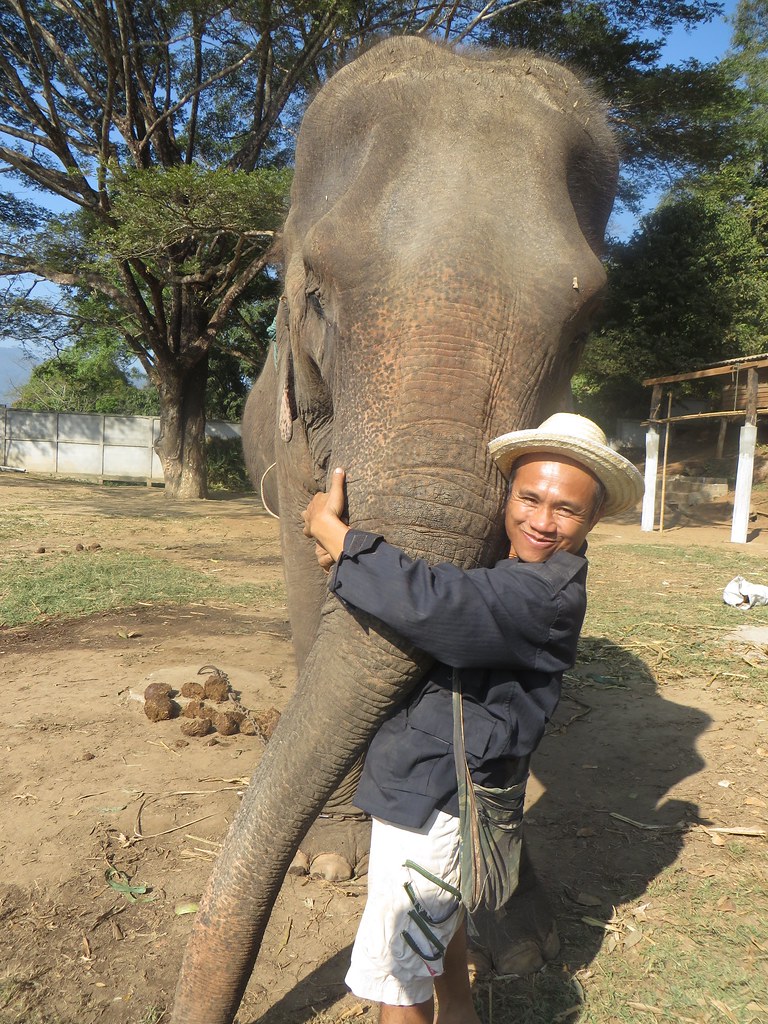 Next up was a visit to the Tiger Kingdom. Tiger Kingdom breeds and raises tigers in captivity. Because the tigers are raised and trained to be around humans from birth you are allowed to interact with them. When you buy your ticket you choose if you are going to visit them all or just a certain size. We chose Smallest and Biggest. While we waited for our timed entry we strolled around and saw the nursery where the tiger cubs were just a few weeks old as well as some that were maybe a month old being fed by a trainer. We also so some of the really big cats watching the raw chicken truck arrive from their cages. Amazing animals!

And then we got to snuggle with cubs!! 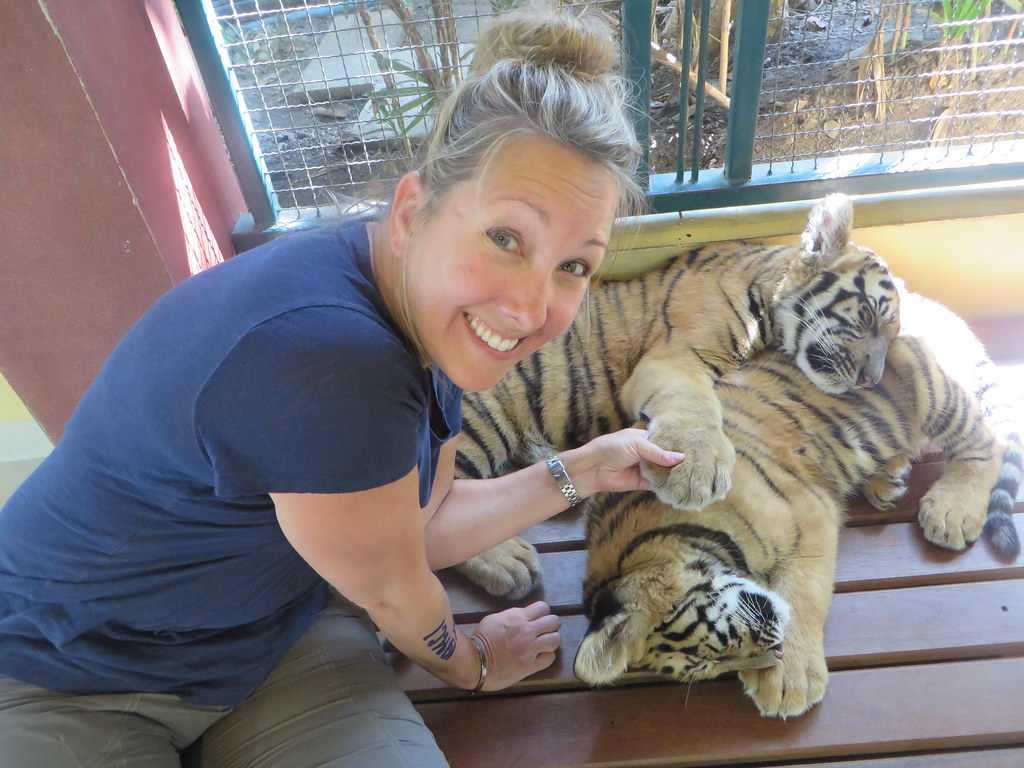 There were about 8 cubs in a playroom type area and each has a handler. Some were snoozing in the heat of the day while others were running around and playing. Look at the size of those paws!

After we went to visit the Biggest. Holy shit that is crazy to be next to such a large animal, even though they are use to people I have a cat and know she goes from deep sleep to swiping at me in a minute! 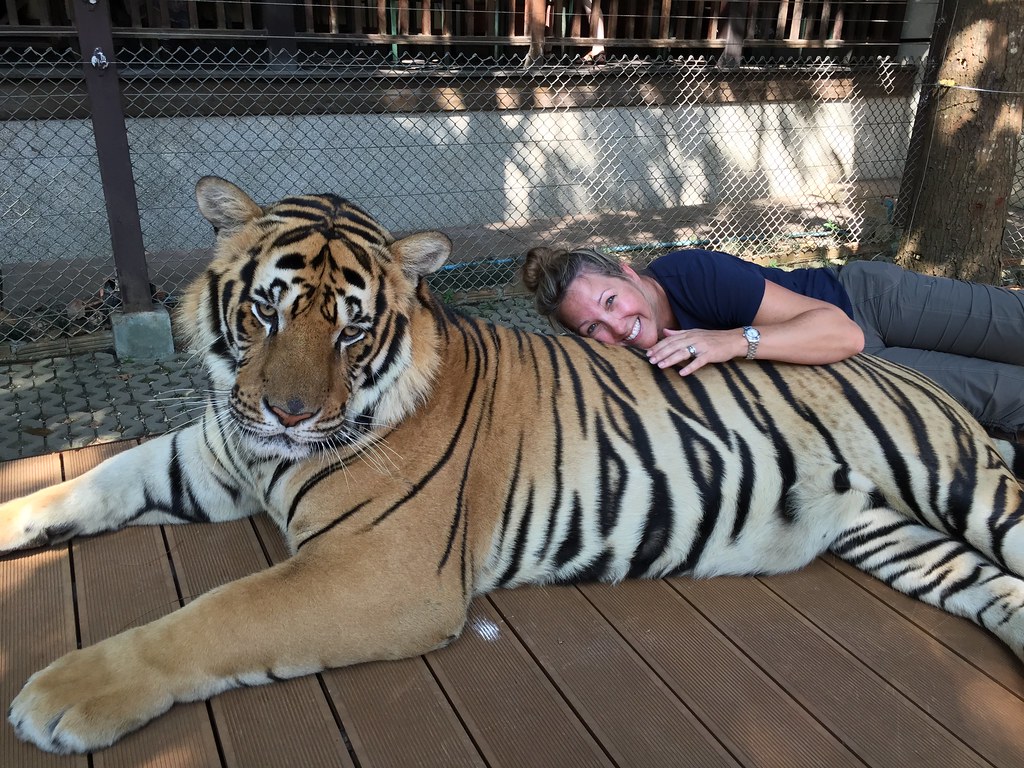 I know some people think the cats are drugged but I have to say that I really just feel that they are so use to this and they also get disciplined when they get aggressive. We saw many tigers being taken out of the common areas after their appointed time. This felt like a petting zoo, with tigers.

We absolutely loved our day of elephants and tigers, we couldn't stop gushing about it for the rest of the night!

As I mentioned in the very beginning of this long post, Chiang Mai is know for the noodle soup dish called Khao Soi. We had a few bowls in various places but the best two were the very authentic one served at Lamduon Fahrm which has been dishing it up in the original location for over 70 years. This restaurant is bare bones and Khao Soi is pretty much all they serve, it was delicious! 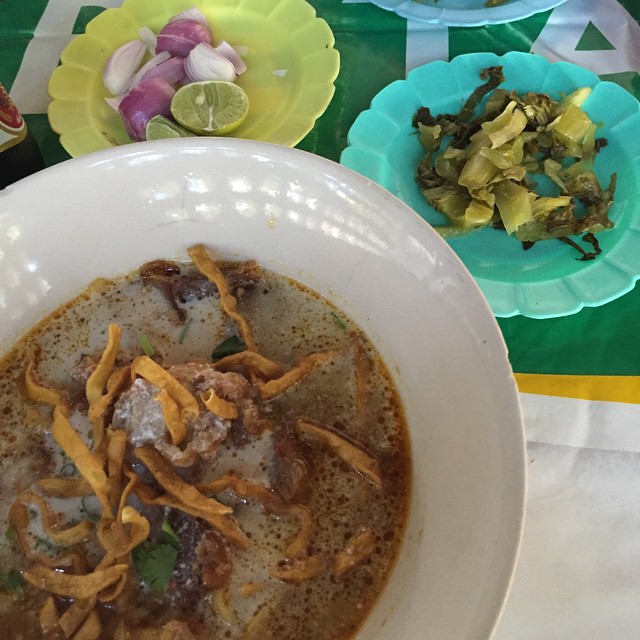 The other one was at Khao Soi Nimman which is in the trendy Nimmanhaemin Road area, full of hip cafes and shops. Nimman serves 9 variations on the classic, like mine which included duck breast, in a more modern style restaurant that has a great outdoor patio.

Our other favorite meal was at SP Chicken, I'd recommend getting there early before they run out of things! And we found some pretty decent cocktails at the DeLanna Hotel, where we were able to sit outside under trees lit with lanterns (I'd also think to check this hotel out if you might like more swanky accommodations!) 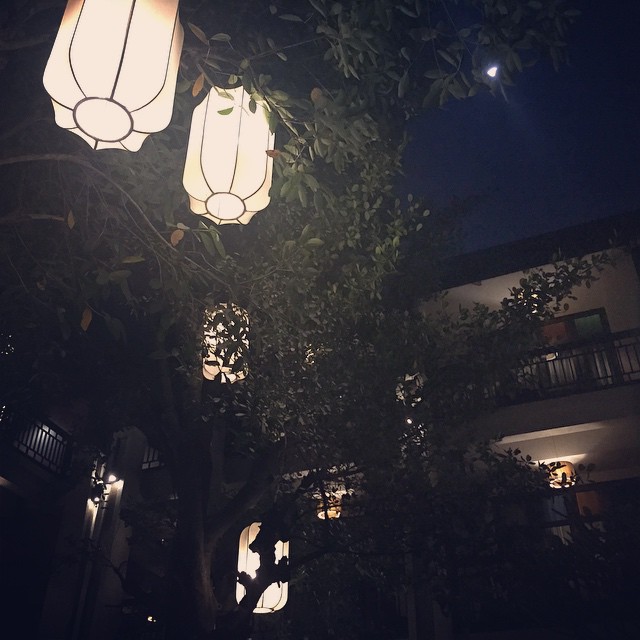 We packed a lot of stuff into our 3 1/2 day visit to Chiang Mai, we could have easily spent another few days! But it was time to pack up so we grabbed a red truck to the train station and boarded our overnight train back to Bangkok.