Best Restaurant in the World?

A long time ago, my now-ex told me he would plan a surprise trip for me to dine at Noma in Copenhagen. That never happened, so when I heard the restaurant was closing this year I suggested to some girlfriends that we try to get reservations. On the first try my 3 girlfriends all logged in at the appropriate time (they are all in Europe, it would have been 1am on a Monday morning for me) and quickly were discouraged by their place in the reservation queue being around number 3,000.

The next month, when the reservation online opened, they all duly jumped in again without much hope. But luck was with us, or rather with Kate as she was the one who scored, and we were locked in for a lunch reservation in July! 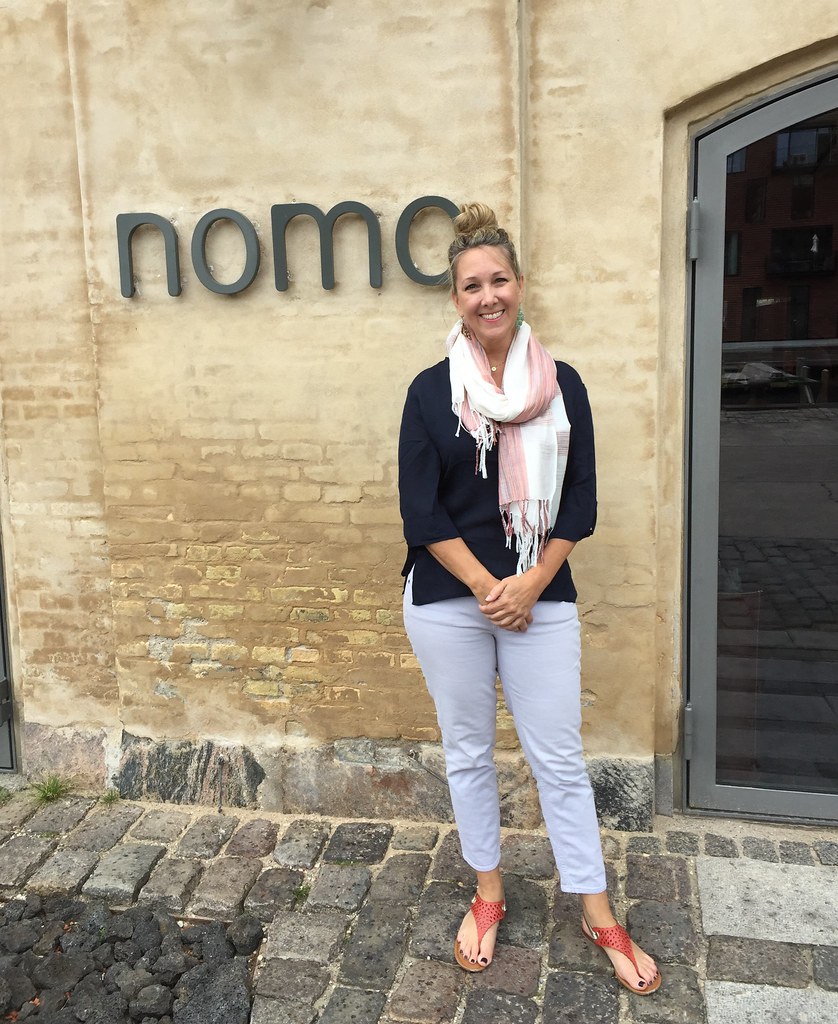 Forest, Kate, and I arrived a bit early and were shown into their bar and set up with some rosé. Caitlin and Sarah joined shortly after that. It was nice having a chance to relax and watch the other diners come in. A friend had told me that as each party initially arrives every staff member who is in the vicinity of the door gathers and welcomes them. This is the only time it happens! I thought this gesture was super sweet. 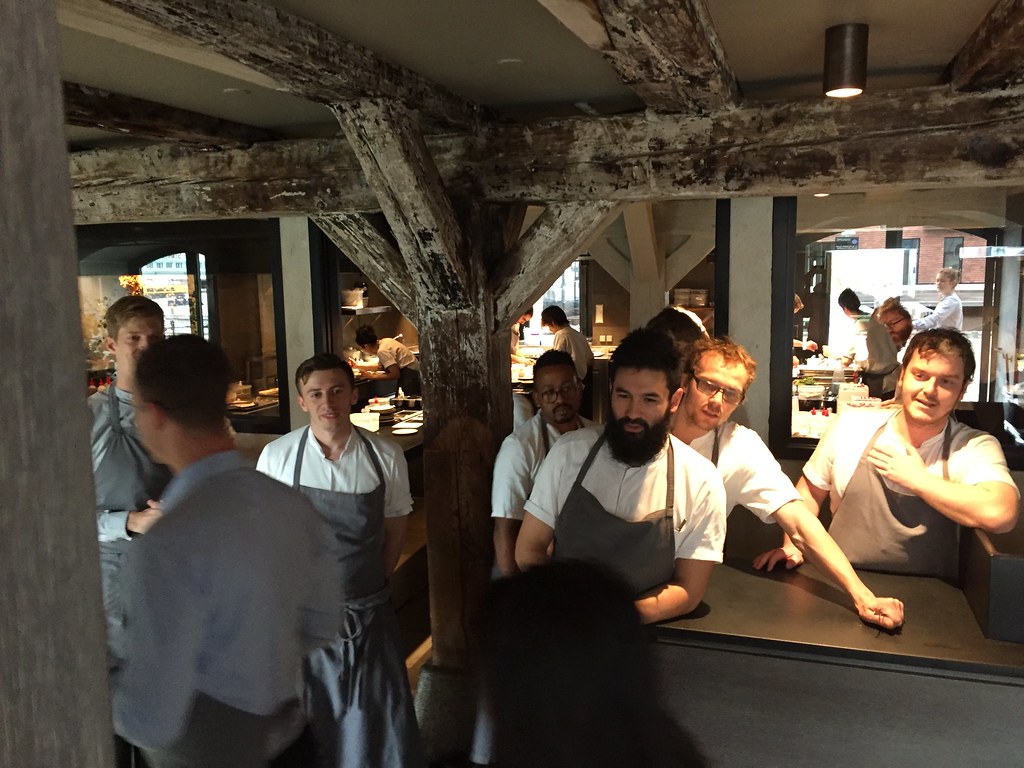 We had a lovely round table right in the middle of the dining room, great for people watching from all sides. There were diners who obviously had been before, many armed with serious cameras, some on fancy dates, others seeming like they were just out for a typical lunch. At roughly $500 per person all in with extras, that isn't going to be my typical lunch any time soon!

When I spotted Chef Redzepi chatting with the guys at a table in front of me it was like a star sighting and I made Caitlin pose with him behind her! I'm such a chef geek! 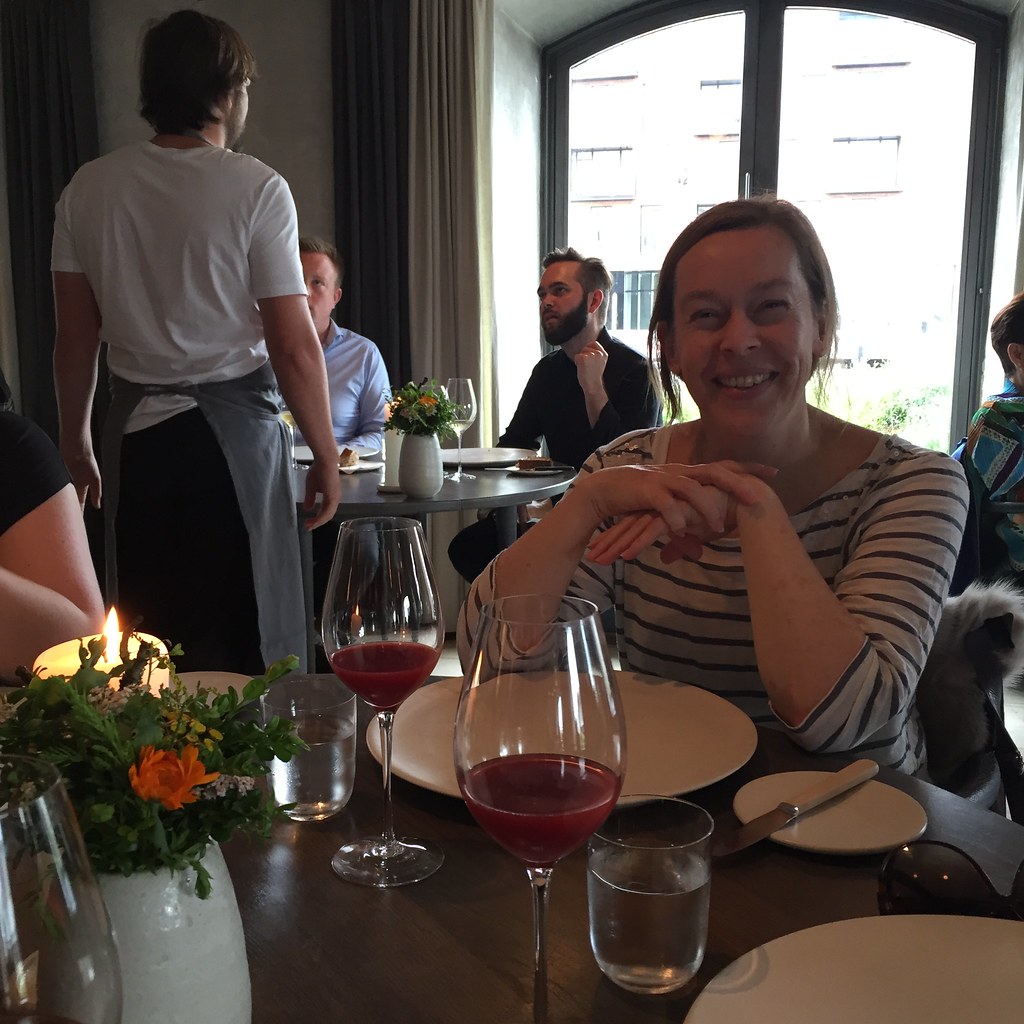 I have a handful of friends who had eaten here before, and although the dishes change there were also some staples that I was happy to see. First up was a gorgeous rose made of rhubarb and seaweed. 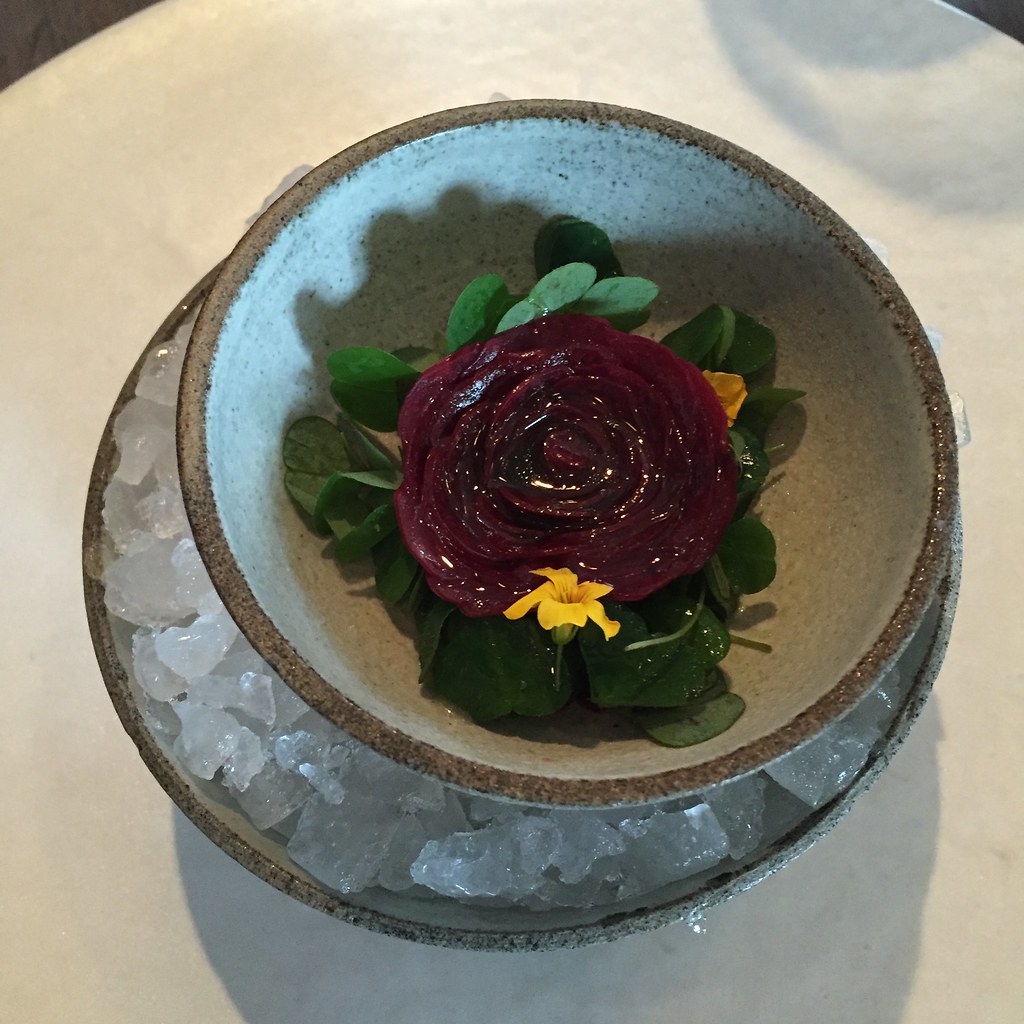 I like to joke that the "new Nordic cuisine" is basically about eating moss and rocks. We have the lovely Willows Inn close to Seattle where Chef Wetzel, who worked at Noma, has served me some lovely food in this style. But I actually laughed out loud when the "vegetable platter" was set in front of me. Moss and rocks! 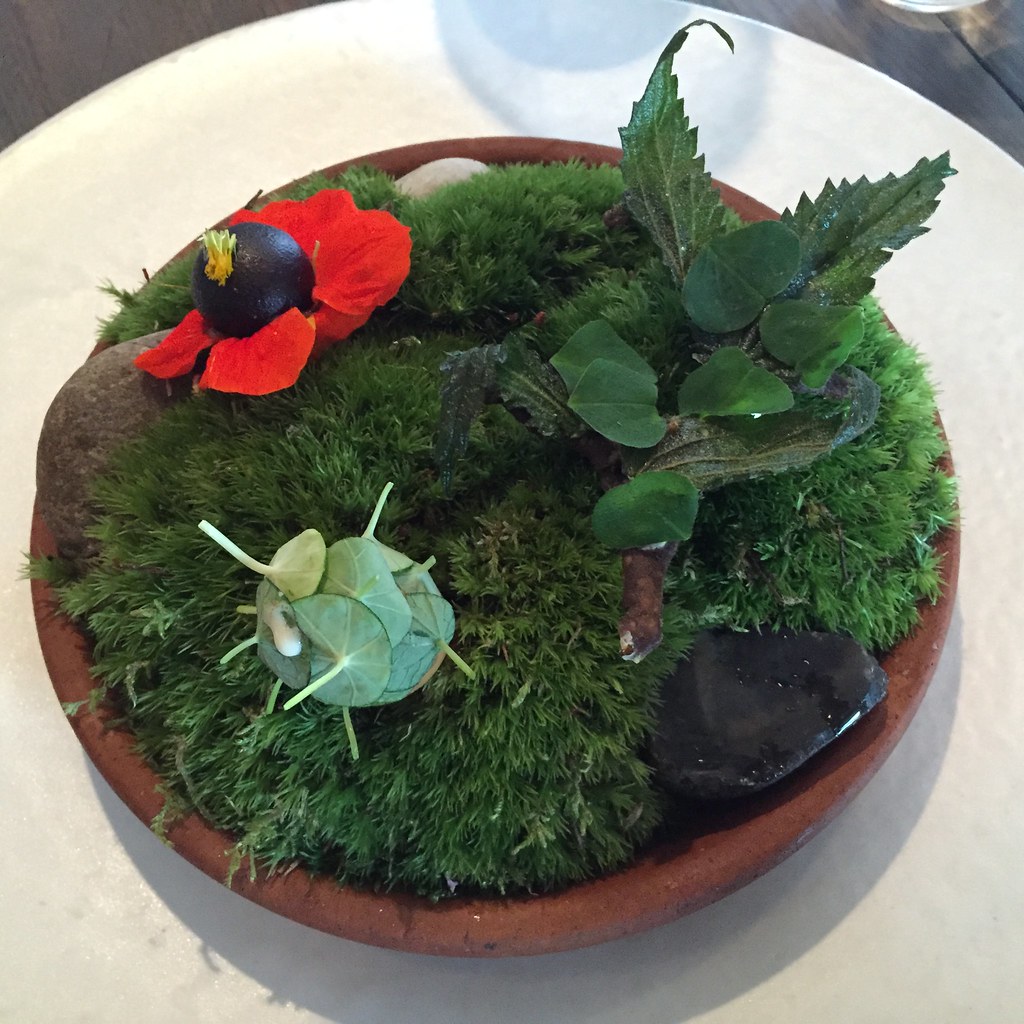 Luckily we were told not to eat the rocks, but to enjoy the flatbread (which looks like a twig) with ant paste, a pickled quail's egg, and a black currant berry. Great presentation, and not my first time eating ants either!

Three of us opted for the wine pairings while two did juice. The wines were really interesting, some natural, and the pairings seemed spot on.

A few dishes were just absolute stand-outs, either visually, flavor-wise, or both. The Radish pie was so beautiful to look at, so delicate, with an overwhelming radish spiciness. I loved how you think "oh look at this cute little tart" and then, BAM! Radish! 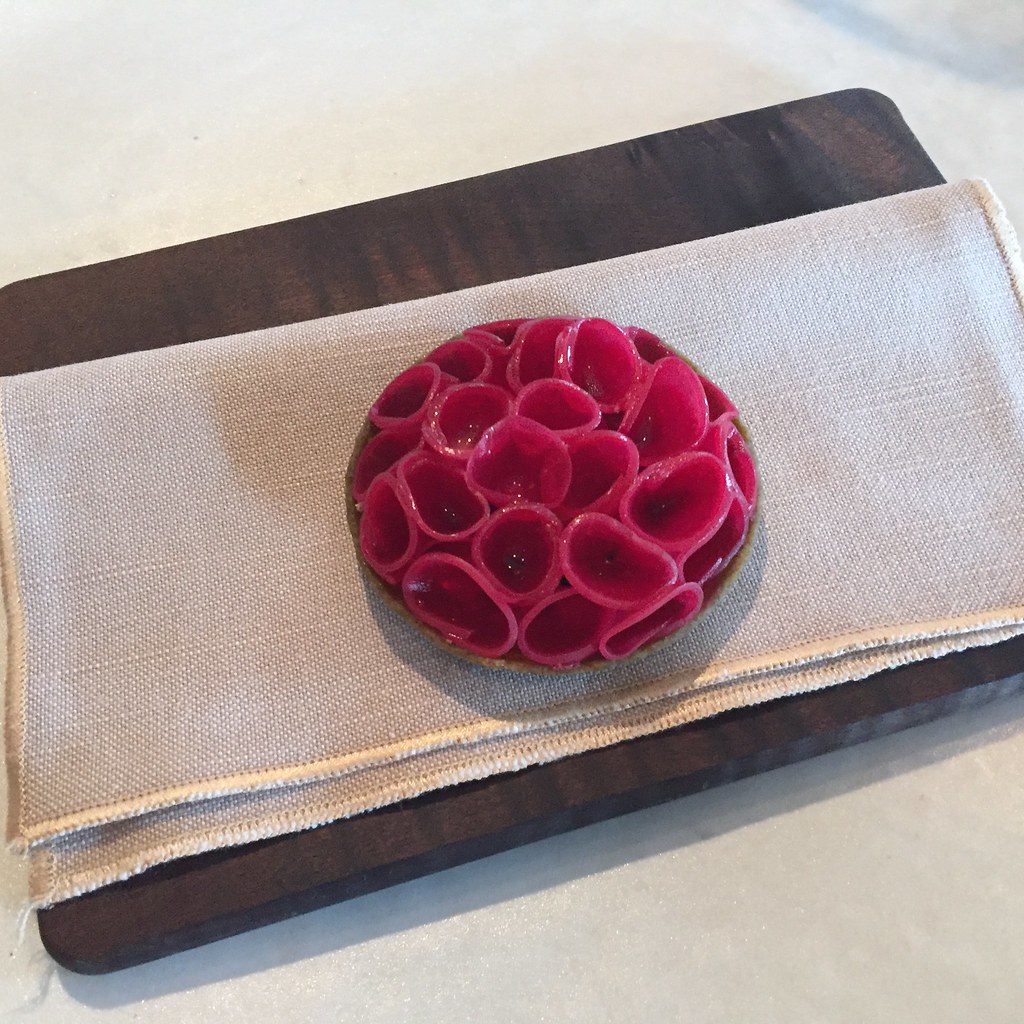 This "light stew of fruit and vegetables" had both cherries and fava beans, two things I would never think to put together. And if you look you can see that the "stew" has actually been painstakingly arranged. Fantastically delicious and beautiful! 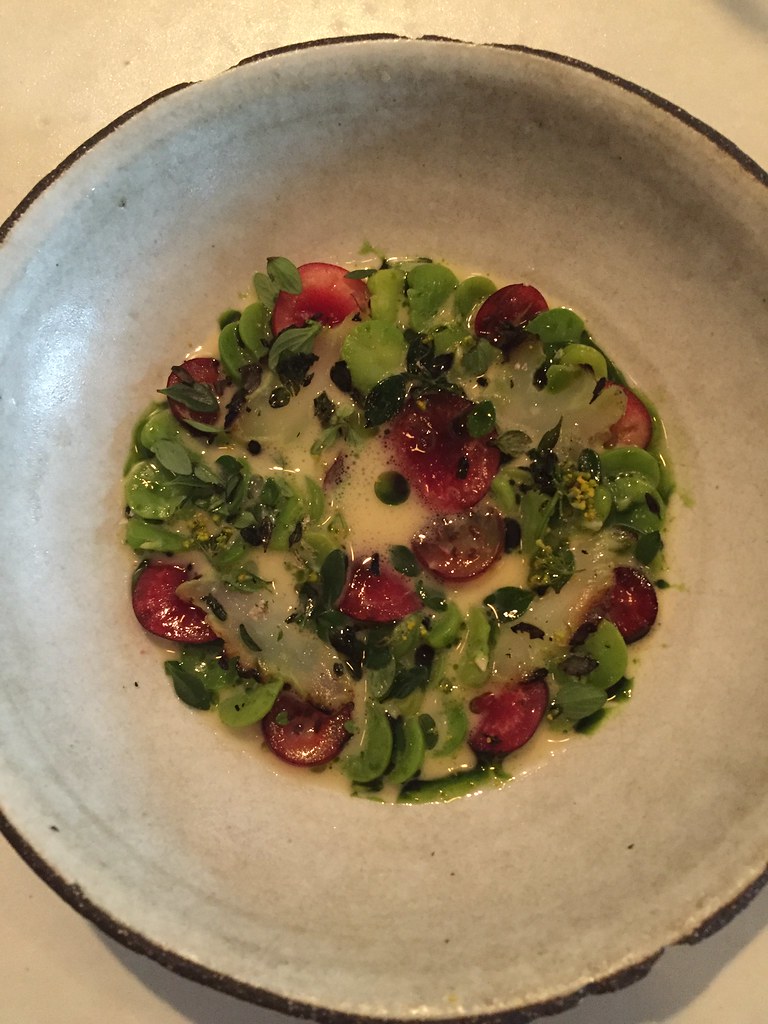 Another dish that the majority of us really found wonderful was the Lobster, lavender, and rose oil. These petals of onion were cooked sous vide (I'm guessing) and then artfully charred. The lobster was barely cooked, there were just tiny lavender buds, and the rose oil was such a slight hint but was a perfect accent. 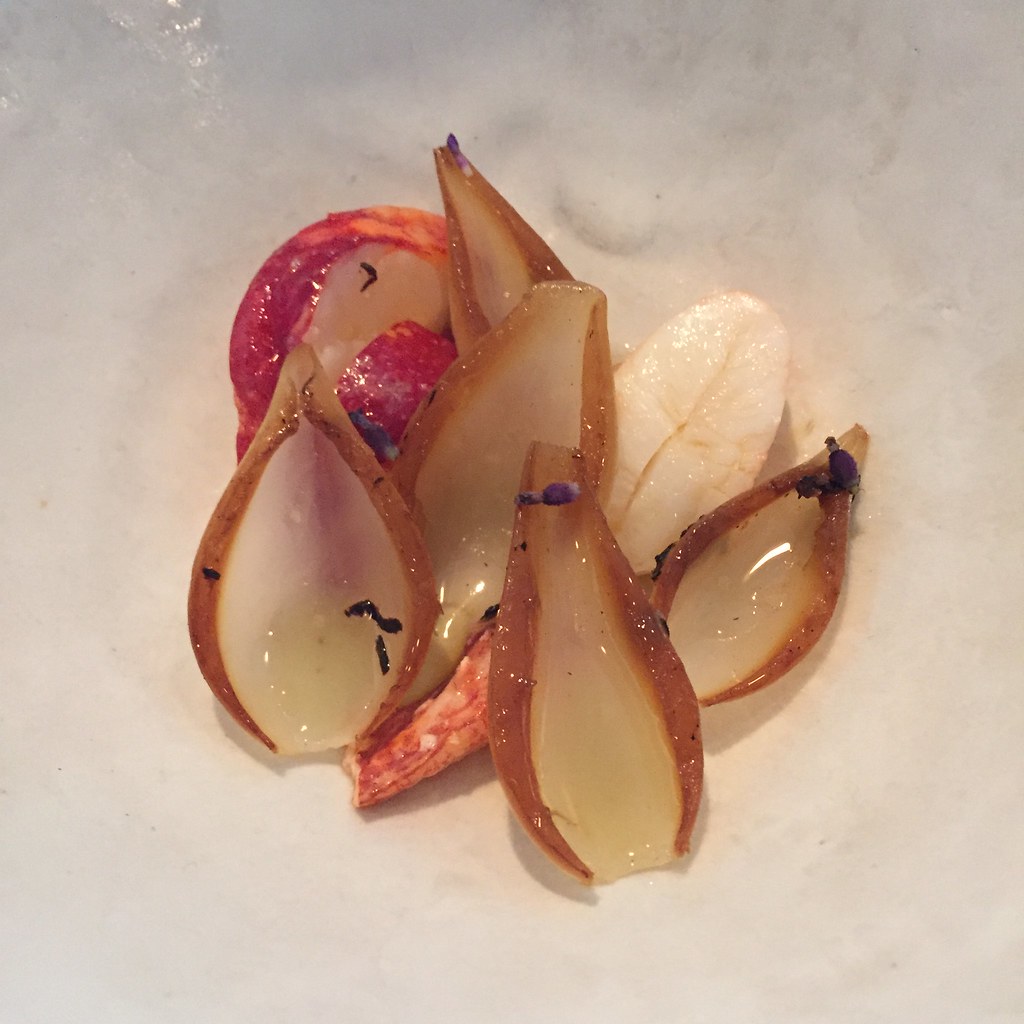 I felt almost guilty eating the wafer-thin crisp of wild roses and Danish peas, each pea having been individually peeled! Almost... 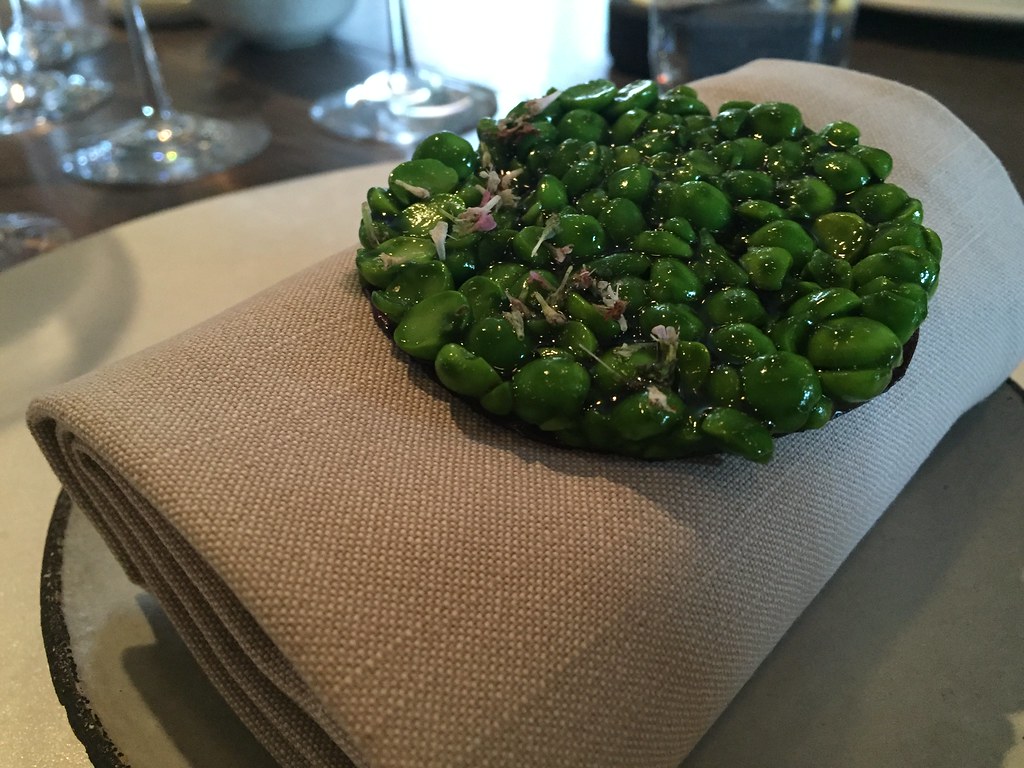 Another "don't eat the rocks" presentation arrived, and this one was the crowd favorite I believe. Steamed king crab and egg yolk sauce was rich and decadent without being heavy. Man, I want to eat this again! 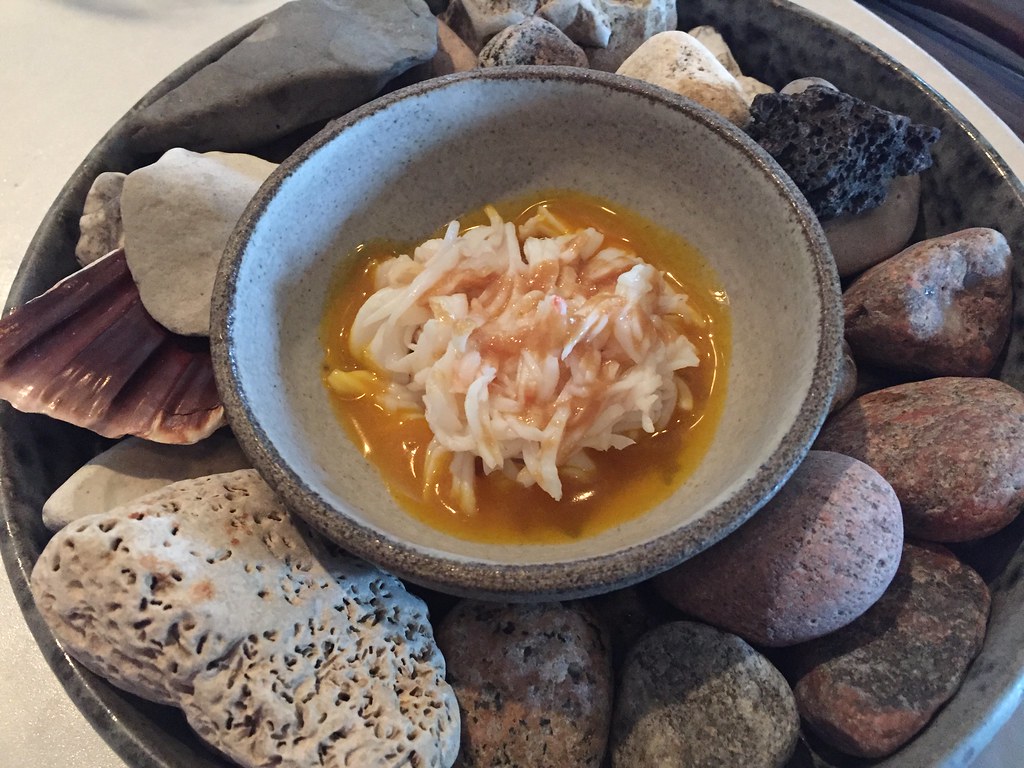 There was a dish consisting of a variety of charred greens that we were invited to taste individually to experience the differences of bitterness. And a beautiful turbot with shrimp as the last and pretty hearty main dish. I chose to get up and get some fresh air at this point. I was full!

When I came back they started the dessert courses. I'm not one for super sweet things so the "dessert of sheep's milk and ant paste" was a nice transition. Then "grilled rose ice cream and elderflower" ice cream bar was as delicious as it was whimsical with its twig stick. 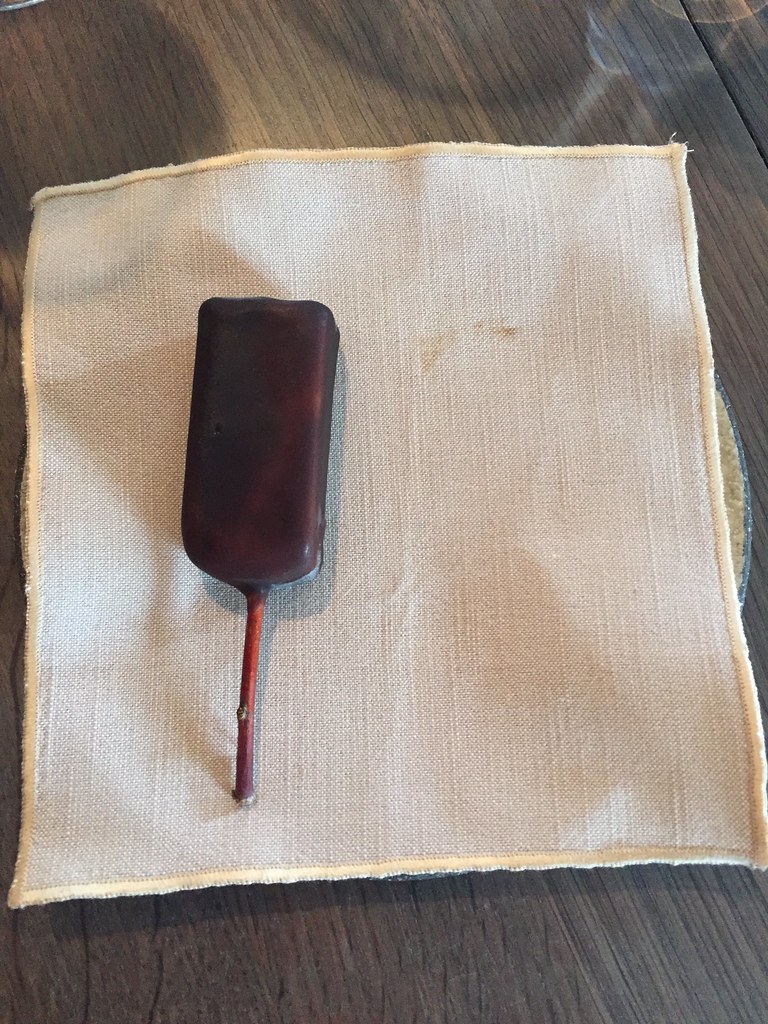 The next dessert was actual moss, and we were told to eat it! Reindeer moss, which Forest and I had  fed to reindeer in Lapland, was chocolate coated and served with mushrooms that had been dried and covered in chocolate as well. 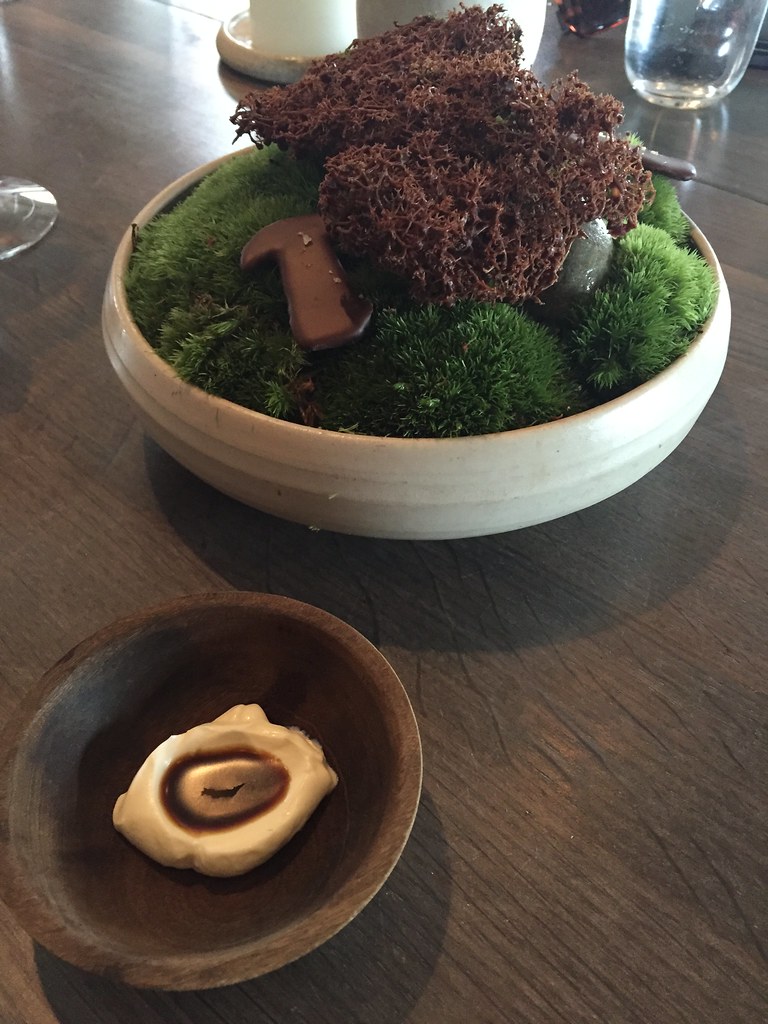 The final dessert was an egg liquor, which was a little like nog but reminded me of something very similar Forest and I were given in Berlin years ago, served alongside a dish of beautiful wild berries. 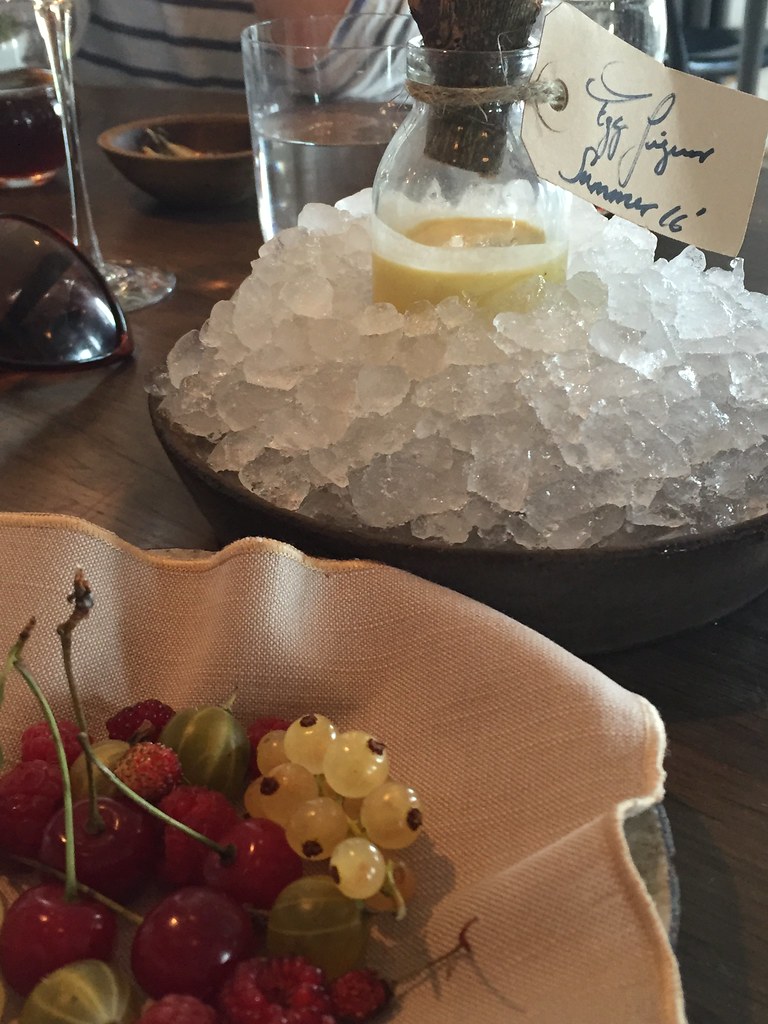 Lunch had started at 1pm and we left our table at 4pm. When I talk about dining as entertainment, this is exactly what I'm talking about. 16 courses, at lunch! The restaurant is the stage, the dishes each scene. Bravo! 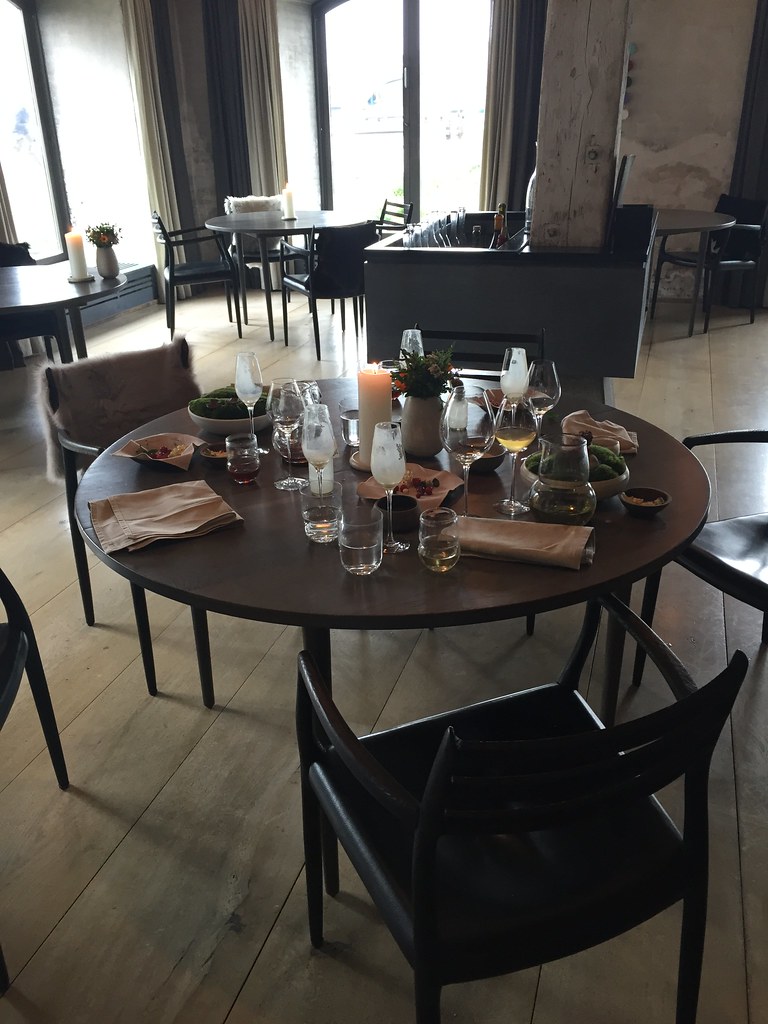 But Noma wasn't done with us yet! The five of us were then led on a tour of the kitchen, the private dining area, the lab, the outside grill area, and the upstairs kitchen where rhubarb roses were constructed and ants were picked through by interns. 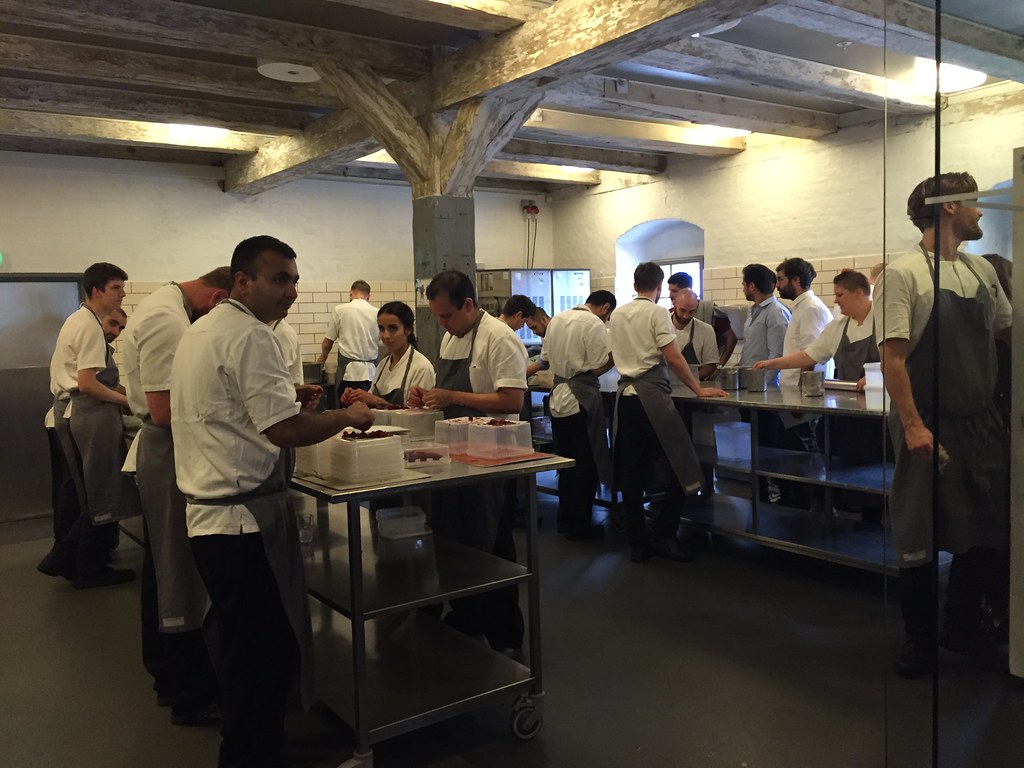 And then we met the man himself! Chef Redzepi was speaking to some other diners and the gentleman giving us our tour said we should probably go since he didn't know how long they would be. I replied that I had flown from Seattle to Copenhagen specifically for this lunch so I was fine to wait! 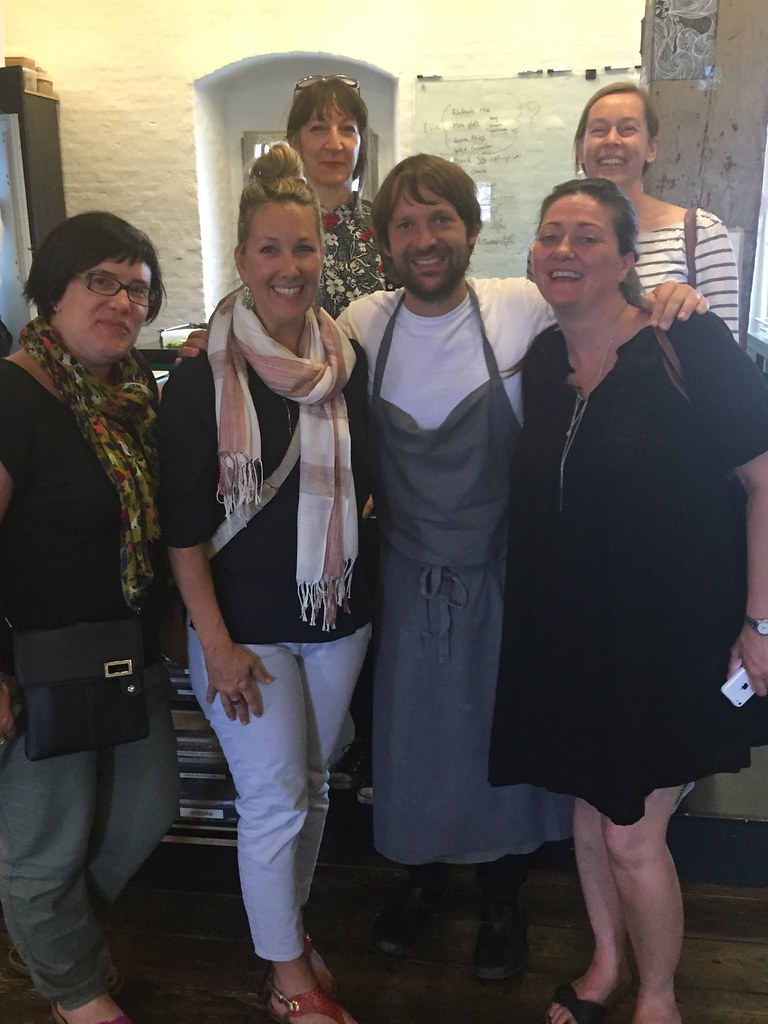 When I told Chef that I was from Seattle and had just been speaking to Chef Wetzel at Willows, he got super excited and wanted to know all about the dishes he was doing. He was genuinely interested and spent a nice amount of time chatting with all of us.

After our tour we were invited back to the bar to finish up with a round of schnapps. Hygge!

I had such an awesome time at Noma; the food, the service, and the company were all top! It's a memory I'll cherish for a very long time!

All Copenhagen photos here.
Other posts from this trip:
Danish Days
Hygge Time!
An American in Bornholm
Dinner in the Middle of the Baltic Sea
Last Days in Copenhagen
at April 01, 2017