The morning before my birthday I woke up early and headed for the airport. The twelfth annual New Year's Eve trip was about to start but first I would be spending five days in France. It was on the way after all.

I had a 45-minute flight from Seattle to Vancouver, on which I was given a new boarding pass as I boarded for seat 1D. I'm always happy with a free upgrade no matter how short the flight! In Vancouver I found the Business Class lounge and helped myself to some champagne and dim sum; I've never seen dumplings in an airport lounge before! 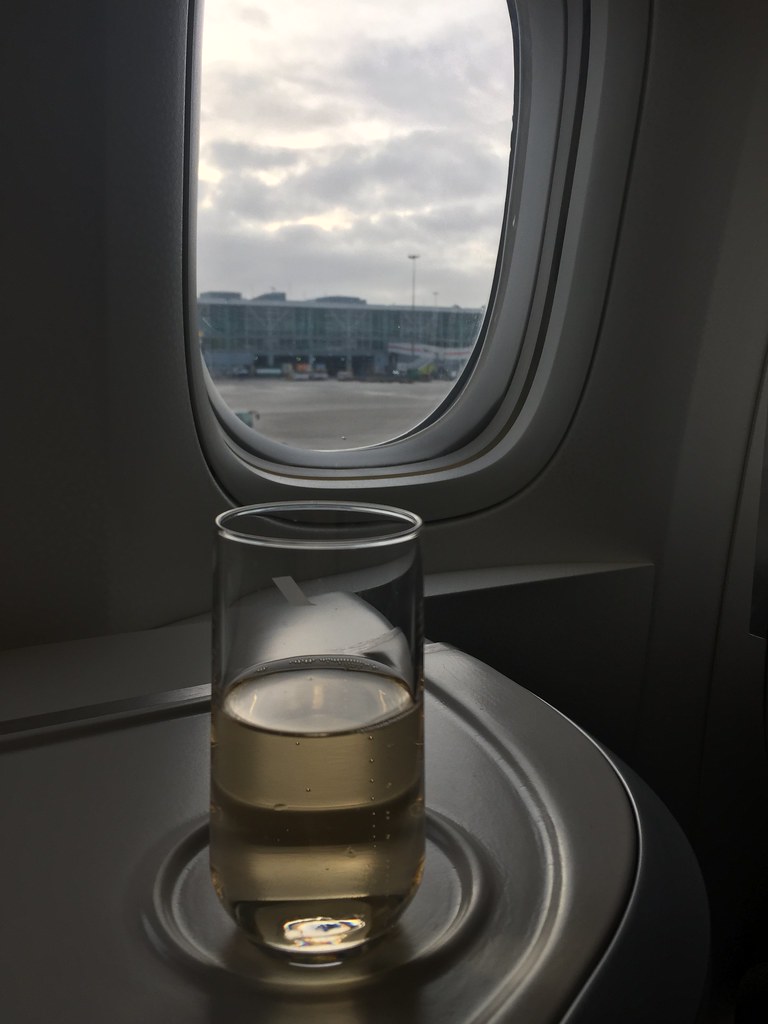 I was flying Business Class on Air France to Paris and the flight cost A LOT less flying from Vancouver, something I will be keeping in mind for future trips. The Air France lay-flat seats were some of the nicest I have been in so far. There was a little cupboard built in to keep my things in, complete with a mirror on the door. There were also slippers! A cute Tumi toiletries bag was passed out, filled with products, as were glasses of Billecarte champagne. Happy birthday to me!

I enjoyed my 4-course dinner with wine pairings, watched a movie, and got a great night sleep. Upon arriving at CdG, I was able to use a special lane for passport control and was out to the cab queue in no time.

Normally I take the train from the airport but since I was bringing Christmas presents with me I had 3 bags instead of 2. There is a 55Euro flat rate into the city and as it was about 9:30am the traffic was really light. And it was really fun to drive under the Eiffel Tower on the morning of my birthday! 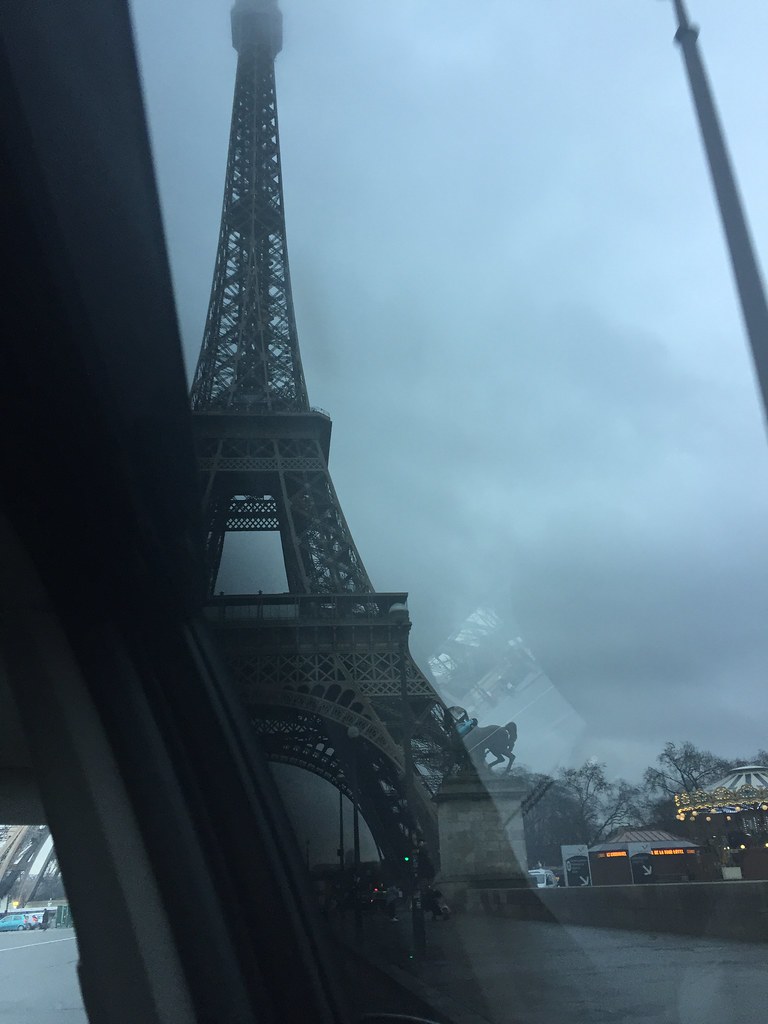 While I was in the taxi I had a text from my friend who I was staying with asking me if I wanted a warm croissant. Is there any other answer besides yes??? As I pulled up to my friends' apartment there was Thibault crossing the street carrying a bag of fresh croissants. Now that is a birthday breakfast I'll say! 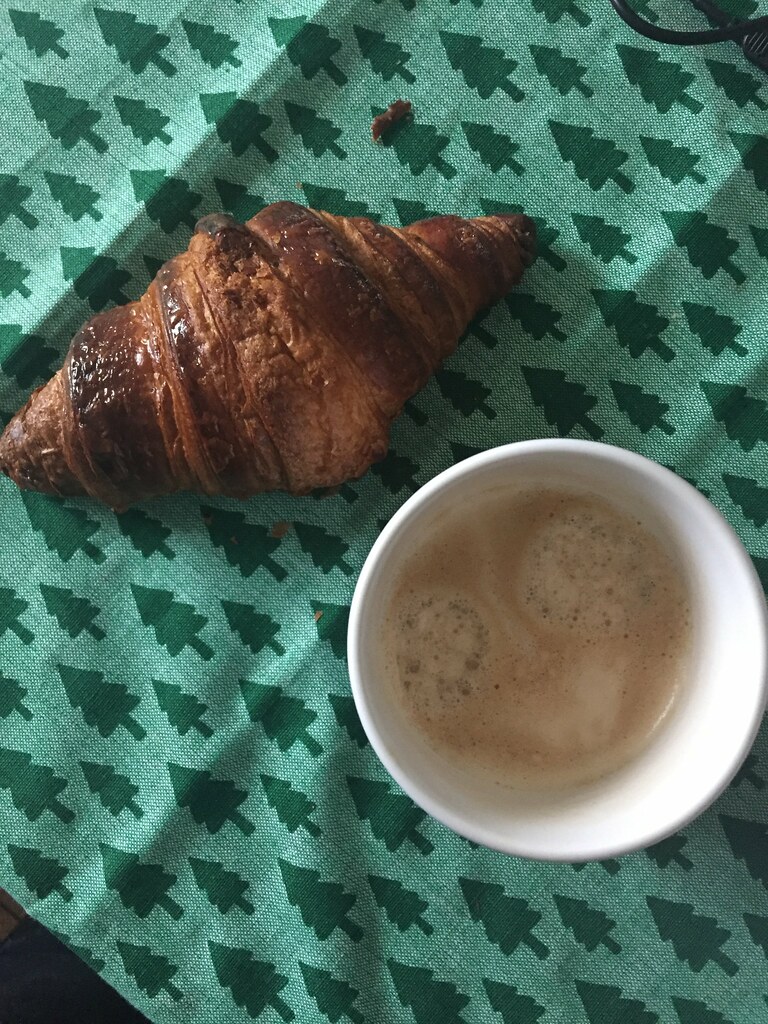 Forest came home from work around lunchtime and the two of us went to a nice little Peruvian restaurant in her neighborhood for lunch. Ceviche, a few glasses of wine, and a birthday dessert compliments of the restaurant, with my best friend in my favorite city.

That evening Forest and I had cocktails at Le Syndicat, a really cool bar using all French ingredients in their drinks. Great music, great space, and excellent drinks. And the bartender sent us some nice vermouths to try as we tabbed out. 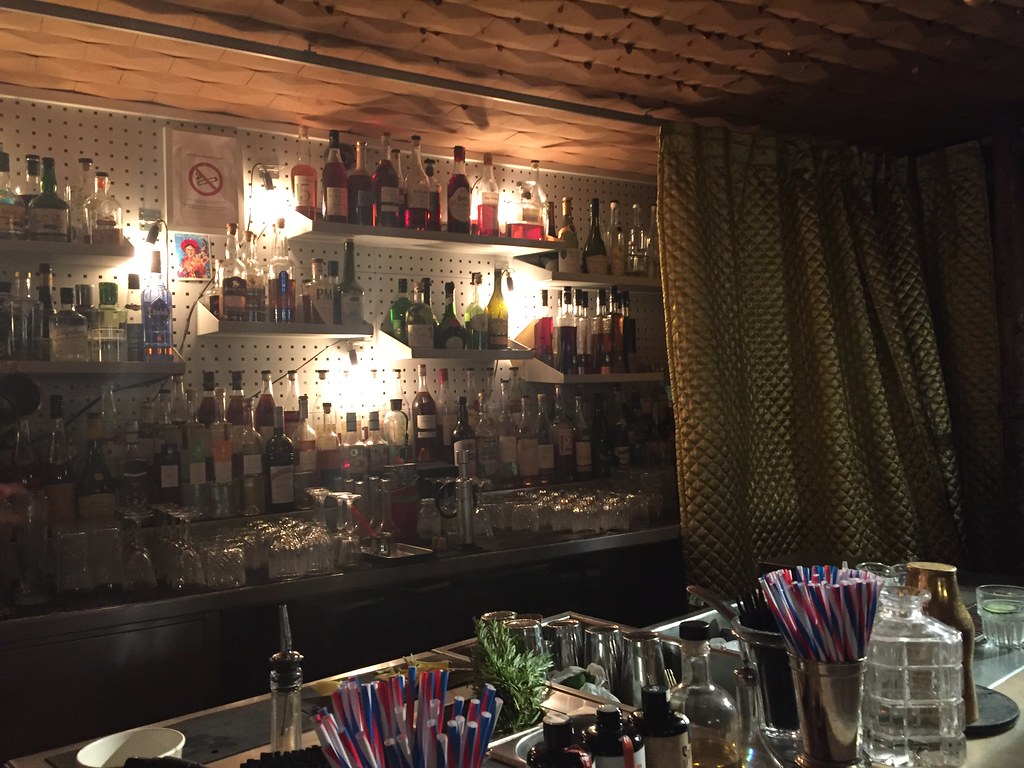 The birthday dinner plan was to go to Bourgogne Sud with a small group of friends for a casual and classic French meal. One of the girls had graciously invited everyone over to her lovely apartment for pre-dinner bubbles. It was so fun to see everyone, including getting a chance to meet Nicky's mom who had just arrived that day from Ireland. And before we all continued on to the restaurant, Nicky's daughter Naoise played the piano and sang me "Happy Birthday". So sweet!

The restaurant served really good Lyonnaise food, the ten of us drank many bottles of wine, and we did lots of catching up! Such a fun night and exactly what I wanted for my birthday.

Forest, Thibault, and I grabbed an Uber home, passing the pretty Christmas lights of the city, and Forest and I finished the night with martini nightcaps. As we do.

The next morning Thibault went out and returned with fresh warm croissants again. I was feeling spoiled for sure, but for him it was just a typical morning!

Forest and I had a little walk around her arrondissement's Christmas Market, picking up a few stocking stuffers and enjoying the decorations. 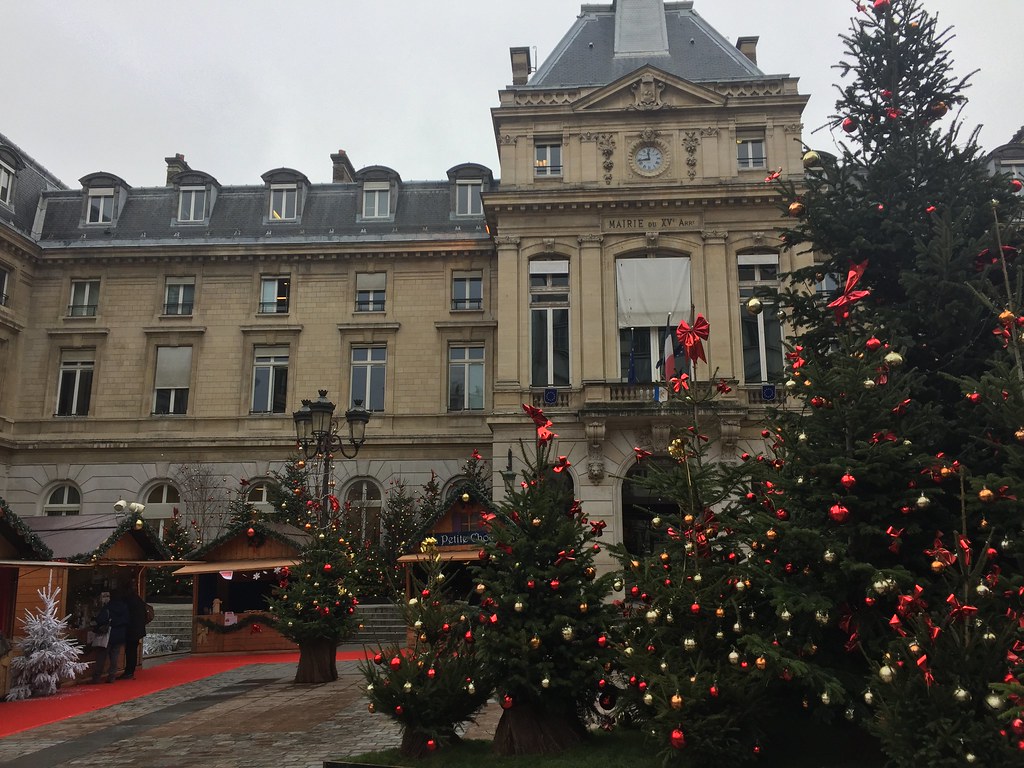 We had planned on doing a big platter of oysters for lunch at the 2-storied restaurant Cafe du Commerce but when we got there we were told they didn't have any oysters that day. I'm still not sure why but we had already ordered a cocktail so we enjoyed those and then moved on to Huitrerie.

At Huiterie we proceeded to order 2-dozen oysters on the half shell; the big flat shellfish so different than what I get in Seattle. Here they remove the top shell entirely (unlike what we had in London) but they don't free the oyster from the shell so you have to dig it out a bit. 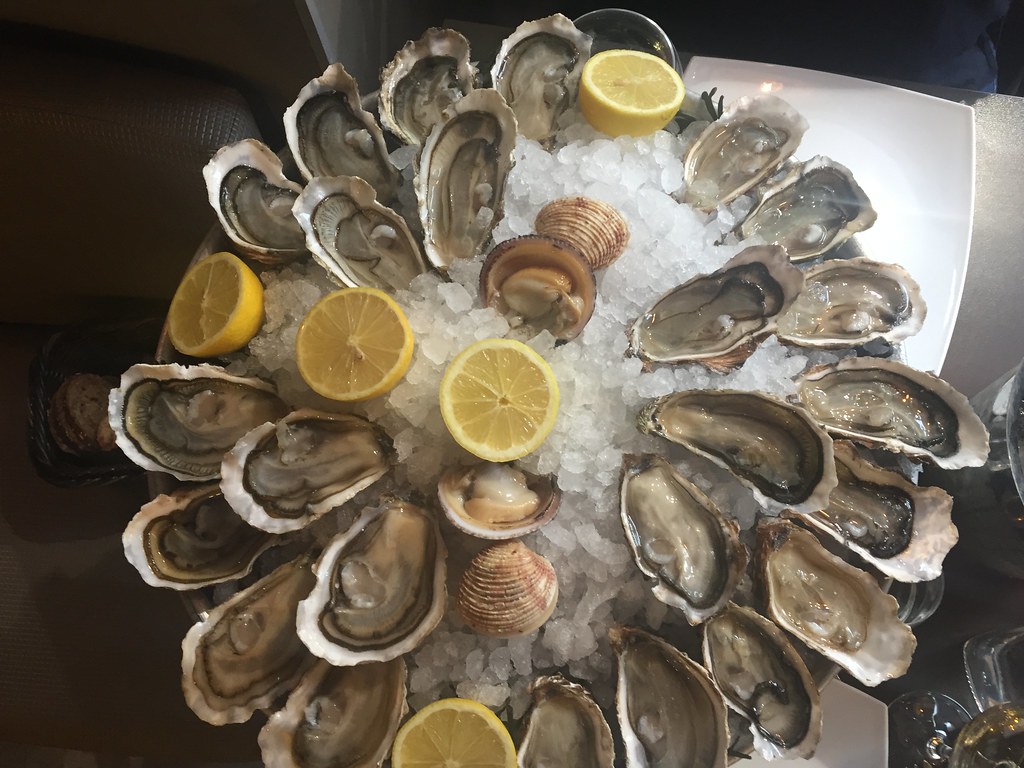 The oysters were delicious, the bottles of wine were cold, and the restaurant was gracious to include a couple of raw cockles and clams for us to try too. I'd absolutely recommend this place in the 15th but it seems that they recently closed.

We went back to the apartment, met Thibault and hopped in an Uber to the Gare Lyon. We were taking the train to Beaujolais to spend Christmas with Thibault's family.

I absolutely love train travel and this was a great ride spent enjoying the scenery as we passed through tiny towns and vineyards, while sipping on some white wine Forest and I had brought along. 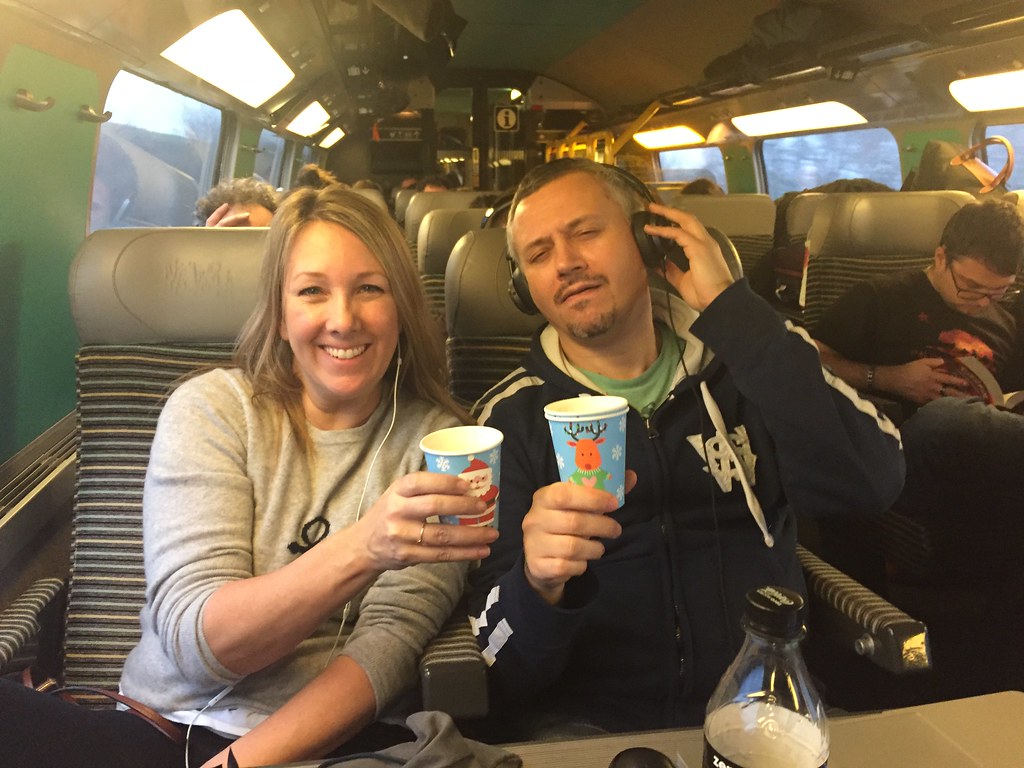 All in all a pretty wonderful birthday spent with people I don't get to see often enough!

Other posts from this trip:
Christmas in Beaujolais
Baltic Bash Kick Off
Out and About in Lithuania
A Very Baltic New Year
Latvian Eats & Drinks