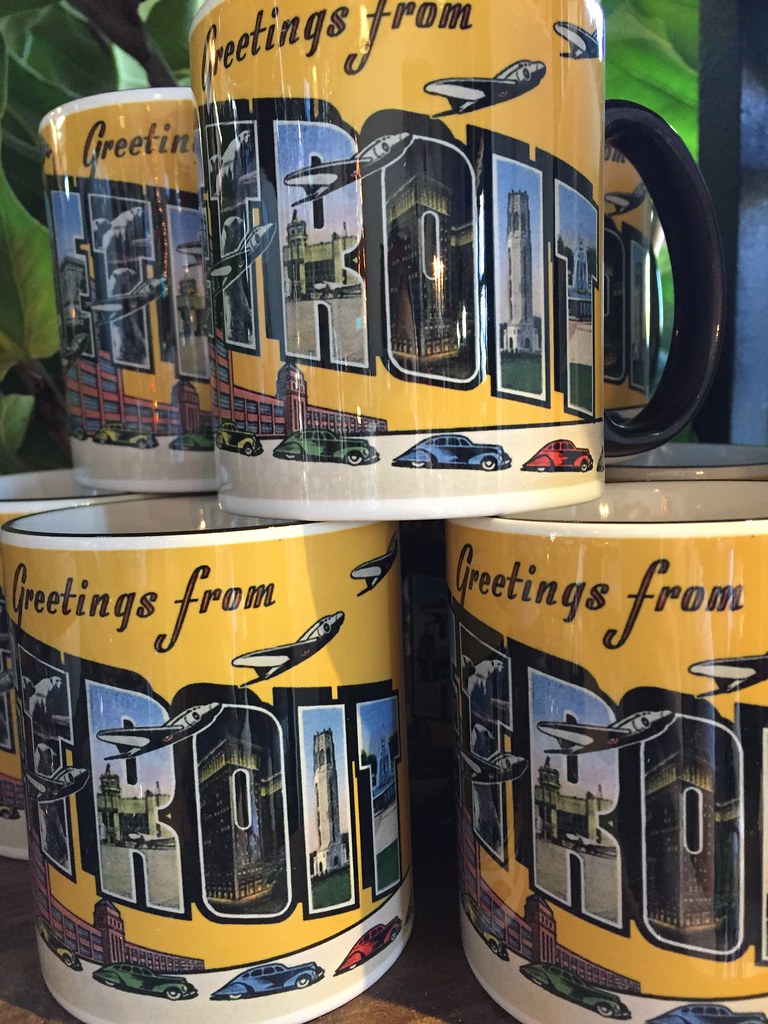 Tidbits like that, and being named one of the most dangerous cities in American, are why I've been curious about Detroit for years. A true American tale; from rags to riches, rags again, future riches? It's hard to say what lies ahead but Detroit is one hell of an interesting place to visit.

My ever-traveling brother was also curious about The Motor City so earlier this summer we met there for a weekend to check it out. I booked a direct flight from Seattle on Alaska Air and was excited when I got a complimentary 1st class upgrade. My brother's flight landed a bit before mine, so he was conveniently waiting for me at the airport when I landed. We grabbed a cab and headed into the city. 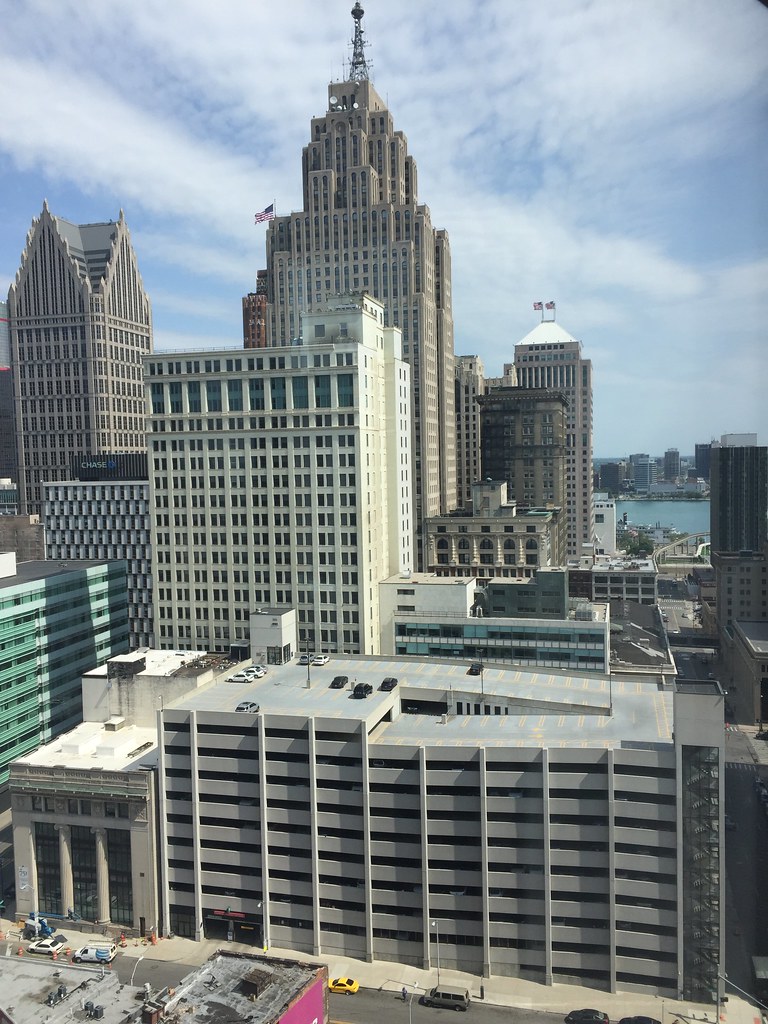 I was using a gift certificate for the Westin Book Cadillac Hotel and Mark decided to stay there too. I was super happy with my complimentary upgraded room; a very large corner room on the 21st floor with views of the river and the city. The room was the size of a suite only without room dividers. 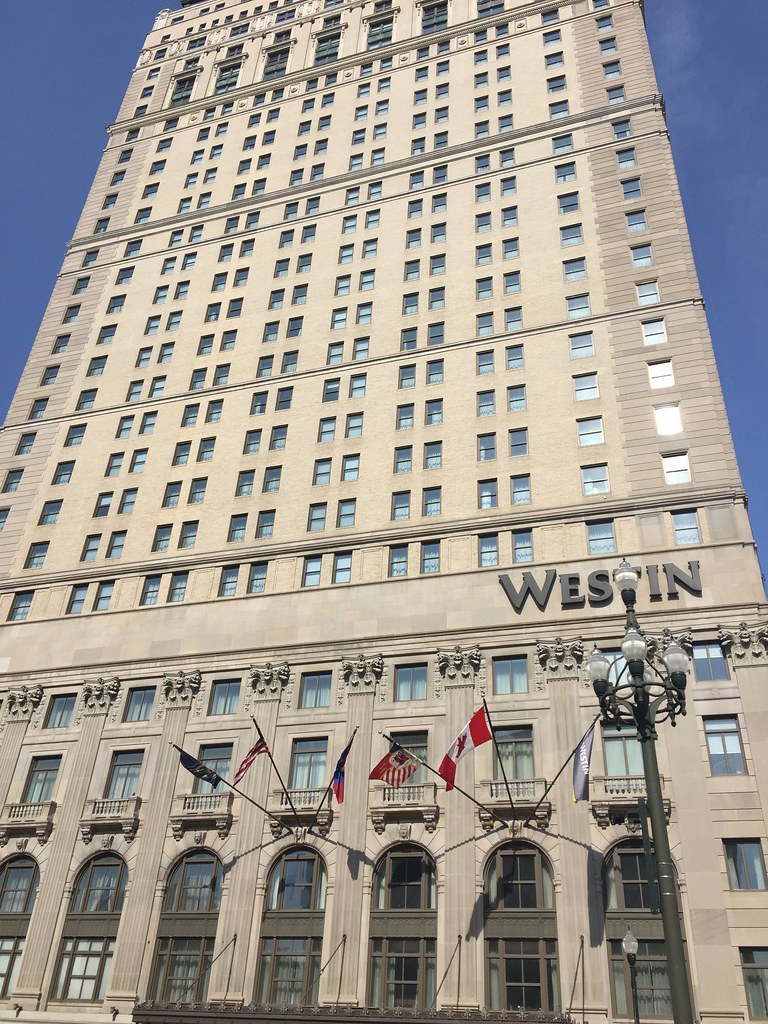 The Book Cadillac was left abandoned for 25 years before an architect firm bought it recently; the largest abandoned building in downtown. They refurbished it, restoring many of the original features, and in partnership with the Westin chain, turned it into a hotel with condo residences. It is absolutely beautiful but only the outside is still original. Historic Detroit has some fantastic photos and history on many of these buildings, this one has an incredible story which you can read about here. And just down the block sits the 36-story Book Tower, originally owned by the same brothers, it was abandoned in 2009, full history here. 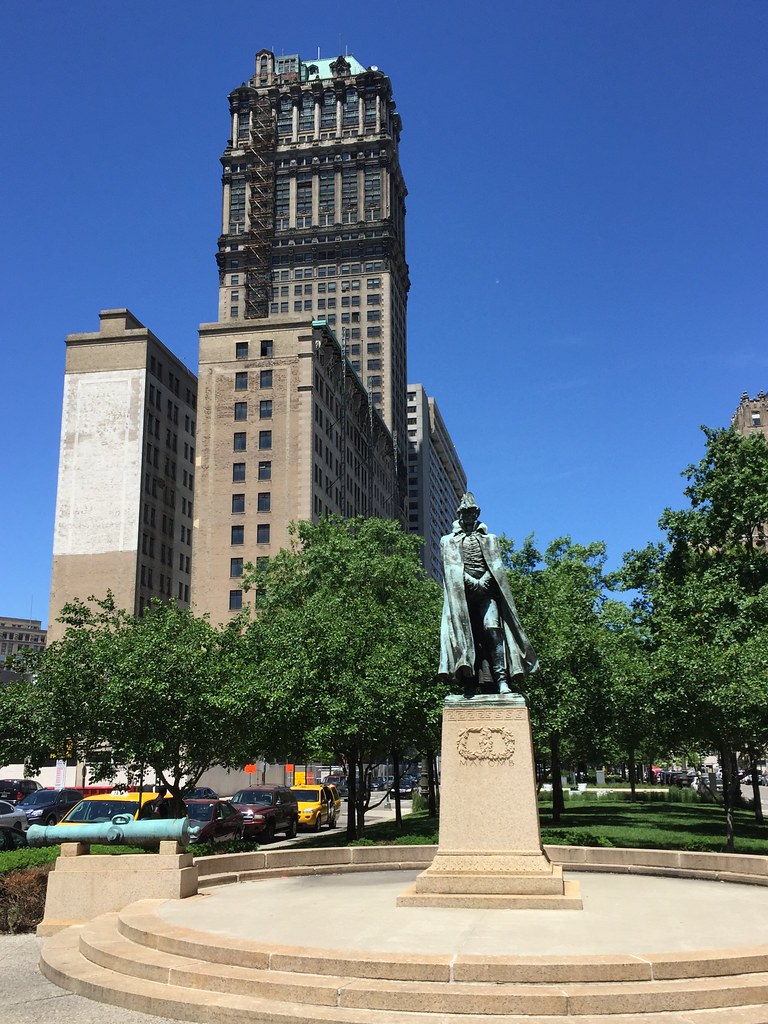 Mark and I immediately set out to explore. We started by catching the People Mover (in Seattle we call this type of train the Monorail) which does a complete loop around town. We had signed up for a guided walking tour of the city the next day but thought we'd just get a little lay of the land. We rode the People Mover to Grand Circus Park and walked over to Comerica Park (the Tigers weren't playing in town that weekend sadly). 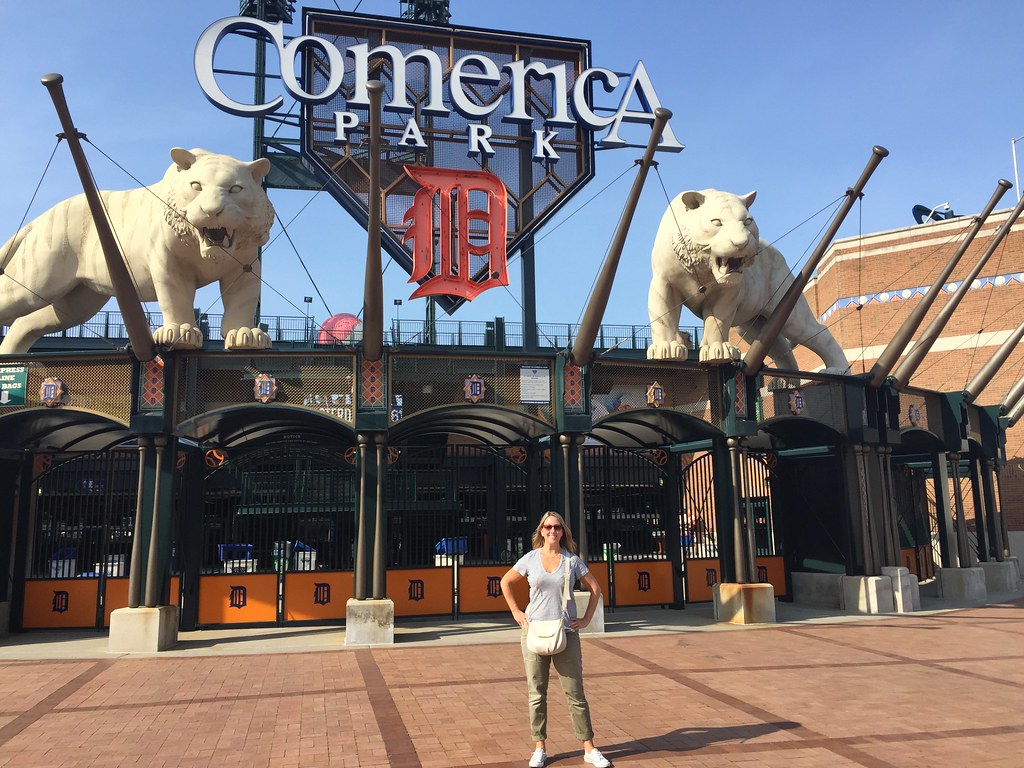 From here we chose to follow the elevated tracks around vs. riding it. We stopped to admire the beautiful facade of the Wurlitzer Building (abandoned but apparently sold and being renovated by a boutique hotel) and noticed the murals painted on many of the empty buildings, including one by Wyland which seemed very out of place! 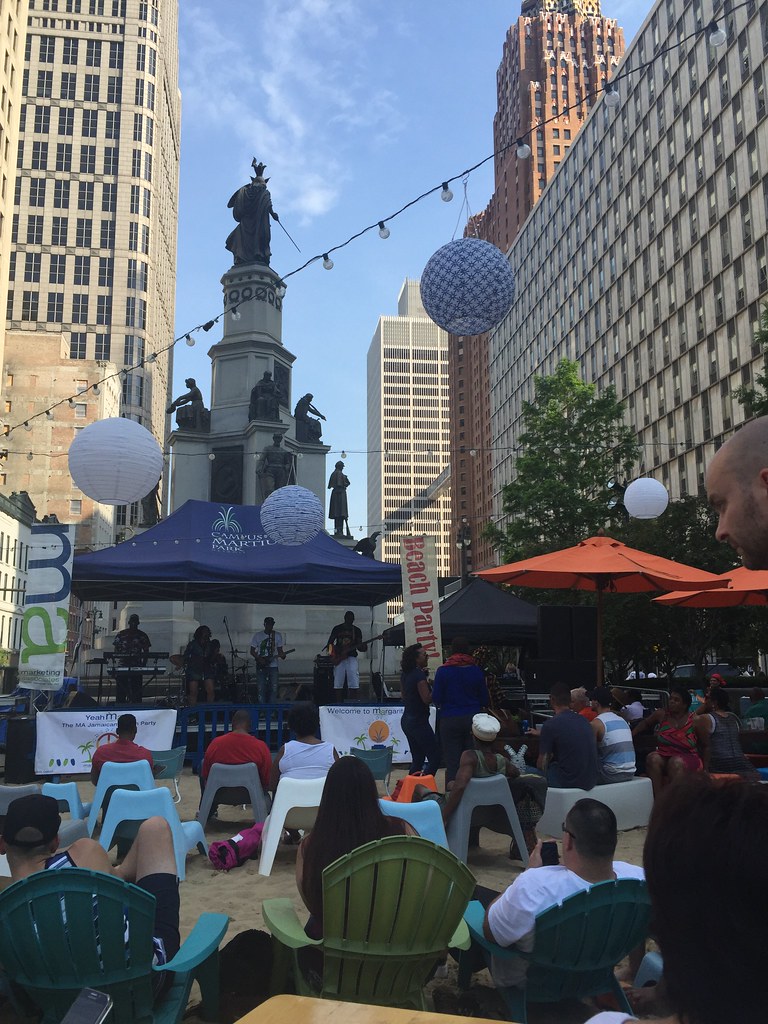 The concierge at the hotel had told me to stop at Downtown Park which was hosting a summer "beach" complete with bar and live music. We were ready for a sit down after walking a couple of hours so headed to the "Tiki Bar" only to find it was serving canned beers and sugary vodka drinks. Wanting to give it some redemption we ordered rum neat, grabbed seats, and put our toes in the sand while enjoying the live reggae band. There were quite a few people at the park but as soon as we left we encountered almost silence in the streets.

From here we slipped into the over-the-top gorgeous 40-story brick Guardian Building; we were the only people in the lobby on Friday at about 4pm. The 1929 building has some impressive architectural notes, more here.  In 2003 the building was made open to the public, it had been only open to employees for over 25 years before that. Now the Bank of America branch inside it is truly the nicest bank branch you'll ever check out (see what I did there?). 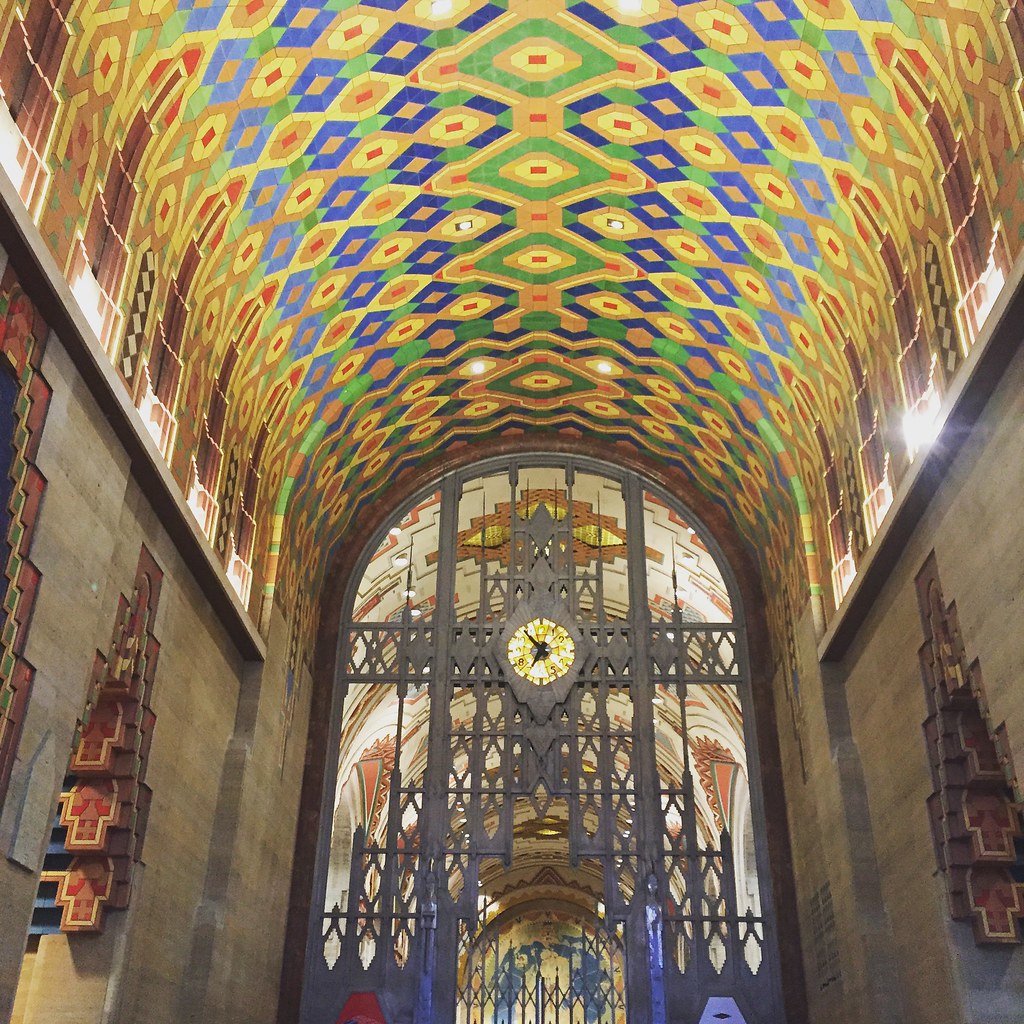 We continued towards the waterfront where we could see traffic heading over the bridge to Canada, which confusingly is located south of Detroit. We walked past the Cobo Center with its banner thanking Mr. Hockey, Gordy Howe, who had just passed away the day before. This huge concrete mass is one of the ugliest sports centers I have seen and looks almost Soviet Block era-ish. Luckily for the Red Wing fans, a new arena is underway for Mike Ilitch's team (fun fact, Ilitch who owns Little Cesar's Pizza, also owns a huge chunk of Detroit. Dan Gilbert, of Quicken Loans, owns most of it though.)

We had walked about 8 miles so it was time to head back on the People Mover, take a lie down, and get cleaned up before heading to dinner. All afternoon, except for the people at the Downtown Park, we really hadn't seen many people in town. And there was little to no traffic, we had been jaywalking all over. It was quiet and odd, like being in an episode of The Walking Dead! 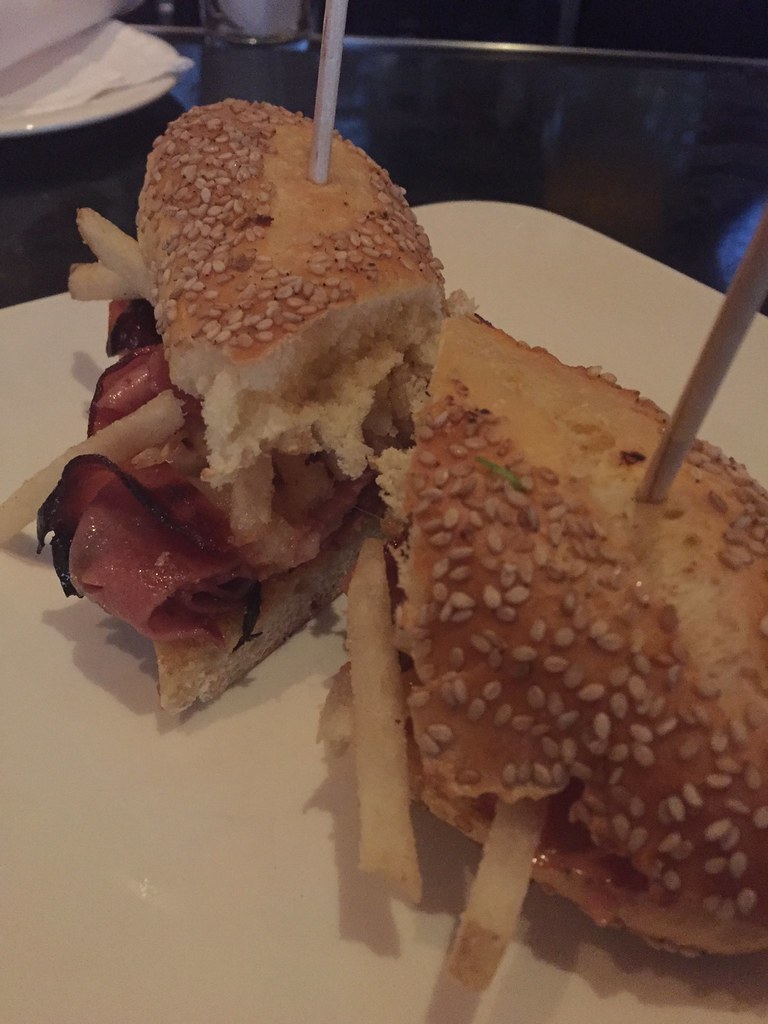 That night we had reservations at Roast which happened to be in our hotel. Owned by personality chef Michael Symon it gets quite a bit of press in a city with few serious dining options. We started with cocktails at the bar and could not pass up trying their fried baloney sandwich as a snack (ok, I couldn't pass it up). It's a thing, and it was good! Dinner was also delicious, the restaurant a modern steakhouse as the name implies. We were super happy with our roasted marrow bones and perfectly cooked steak. I'd heard they have amazing wings but we didn't see them on the menu that night.

We grabbed an Uber and headed into Cork Town for after dinner drinks. Cork Town isn't far, and I don't even think it is dangerous as its reputation once was, but the streets were just pitch black and seemingly deserted so a car seemed the better way to go.

Drinks at The Sugar House were great! The bar has a very good rum collection and multiple menus of original, classic, and tiki drinks. We sampled a few before heading back to the Westin. 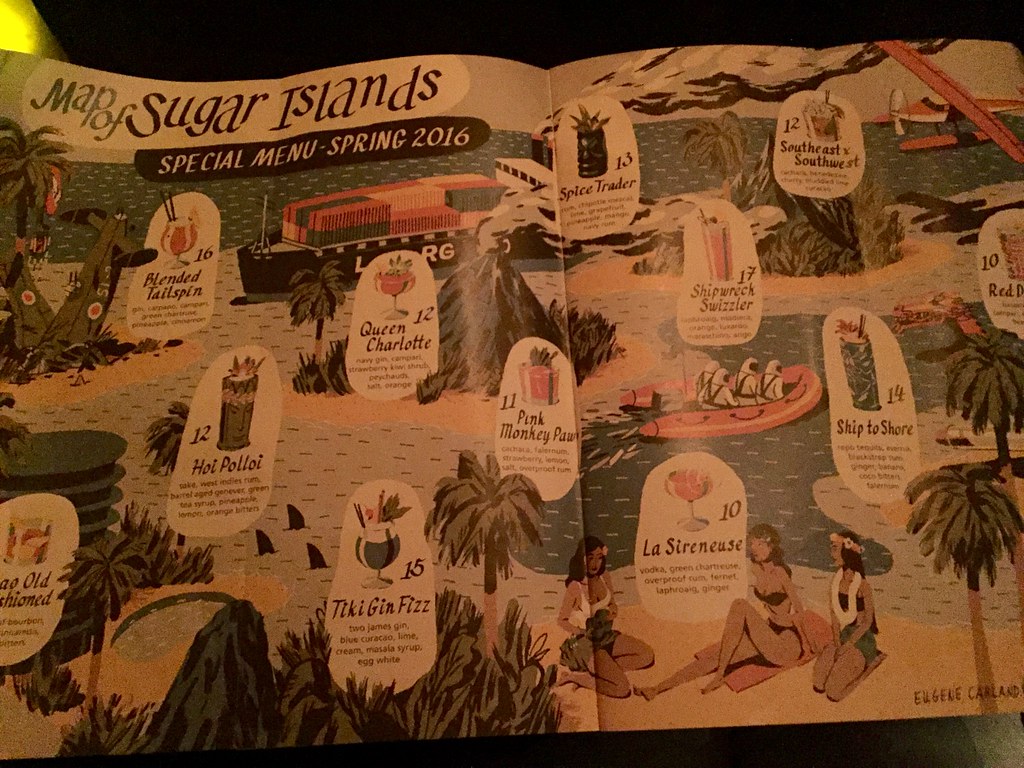 The next morning we grabbed coffees to-go and walked to Eastern Market for the Saturday market. Along the way we stopped at The Belt, an ally/outdoor gallery of cool local art. 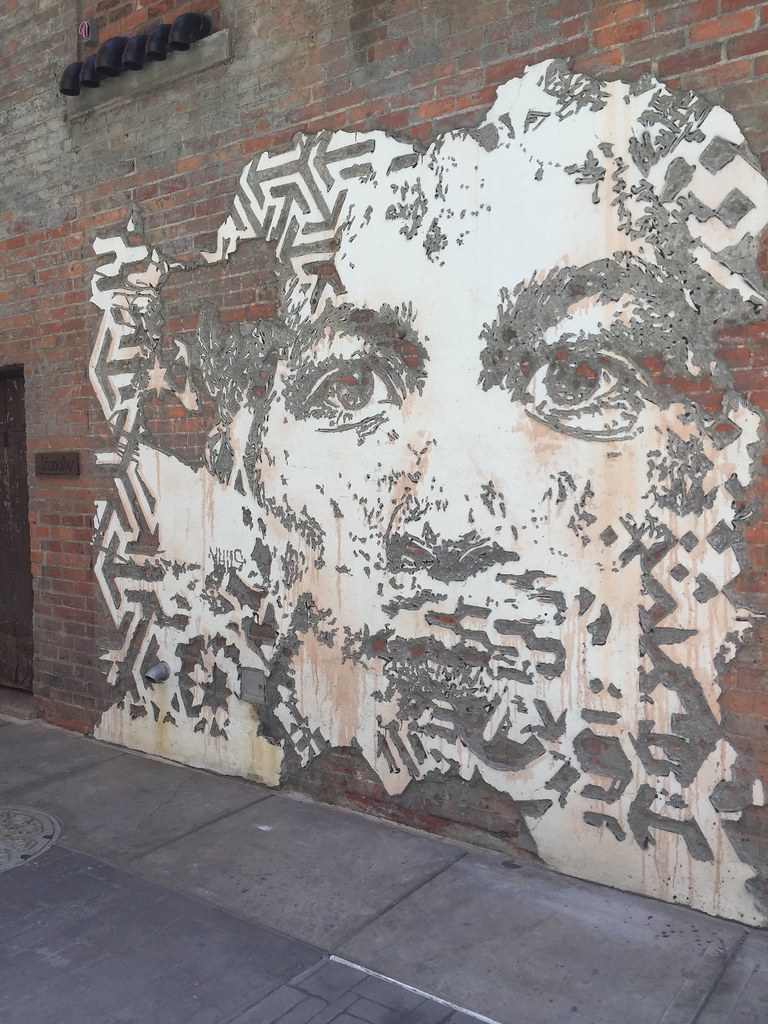 It was a long walk through flat, empty neighborhoods. It was a bit strange but it never seemed dangerous. We were actually just continually surprised by the lack of traffic and people. Once we got to the market area we found the Russell Street Deli I had heard about for breakfast, but decided that the line outside was entirely too long; here's where all the people were! Mark spotted a place called Farmers Restaurant that featured house-made corned beef. Sold! We were seated in the diner in a matter of minutes, had one of the friendliest waitresses ever (who was also over-the-top curious as to why we were in Detroit), and had fantastic corned beef and eggs for breakfast. Go! 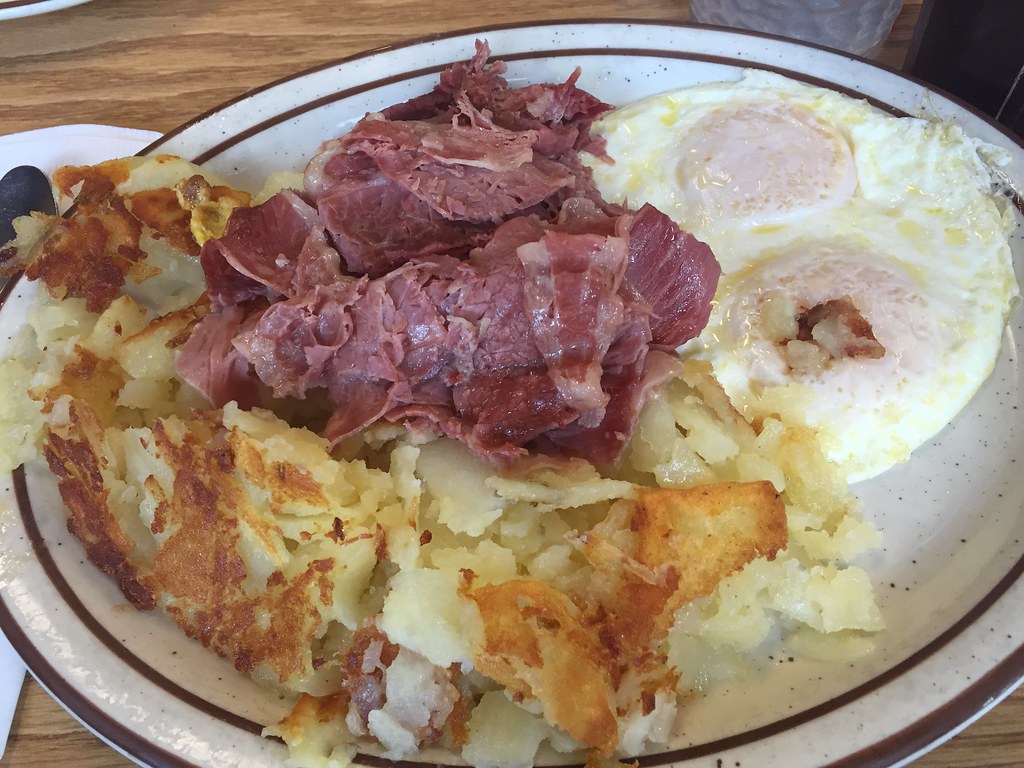 The market was ok, honestly nothing out of the ordinary, but the area around the market is really interesting. Boutique shops sprouting up in an otherwise mostly industrial abandoned area. We headed to Detroit City Distillery for a tasting of their gin and ryes and then decided to grab seats at the massive wood bar for a cocktail made with said spirits. As you do around noon on a Saturday. 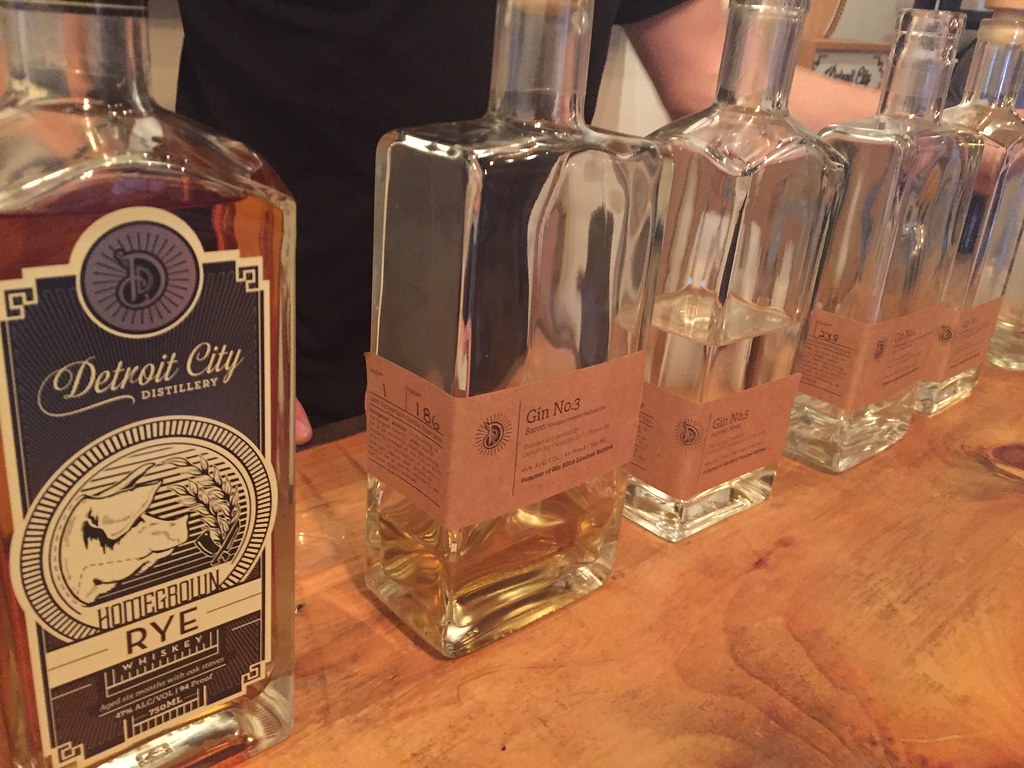 Refreshed, we called an Uber and headed to our next stop, the Shinola Midtown store. We had already seen the Shinola clocks around town, the company is one of the most visual to try to create more jobs in the city (besides Quicken and Little Cesar's) since opening there in 2011. The shop could have as easily been in Brooklyn as Detroit; bespoke watches and leather goods, a live DJ, and a spirits tasting in front of the luxury bicycle production area.

The city is so spread out that we called another Uber and headed back to the hotel to drop off my purchases. Then we went for the ultimate Detroit snack, a Detroit Coney. There are two famous places to get these at, Lafayette or American, which happen to be side by side and owned by brothers. We chose Lafayette, sat at the counter, and had some locals assist us with our order of coney dogs and fries. When you go, and why wouldn't you, be sure you have cash. No credit cards accepted. 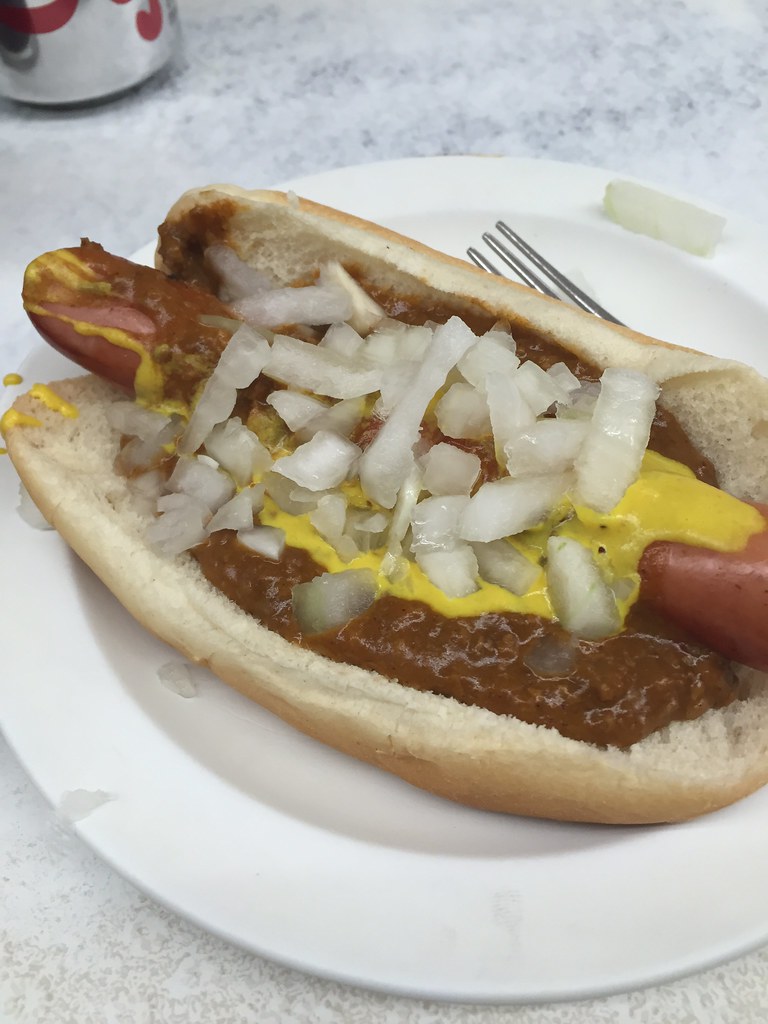 We stopped back at the "beach" in the downtown park for some shade and cold drinks before meeting up with our Urban Adventures walking tour; I was really excited to see and hear more of the amazing architecture of this city!

There were 8 of us with our guide Charles, a retired Detroit-er. He was sweet and full of information, but he was also very long winded. One of the coolest stops that Mark and I hadn't already done ourselves was the GM Renaissance Center. Charles not only took us around the buildings but took us to an awesome spot for views of the waterfront and got us up to the 72nd for amazing views of the river, and the lake. 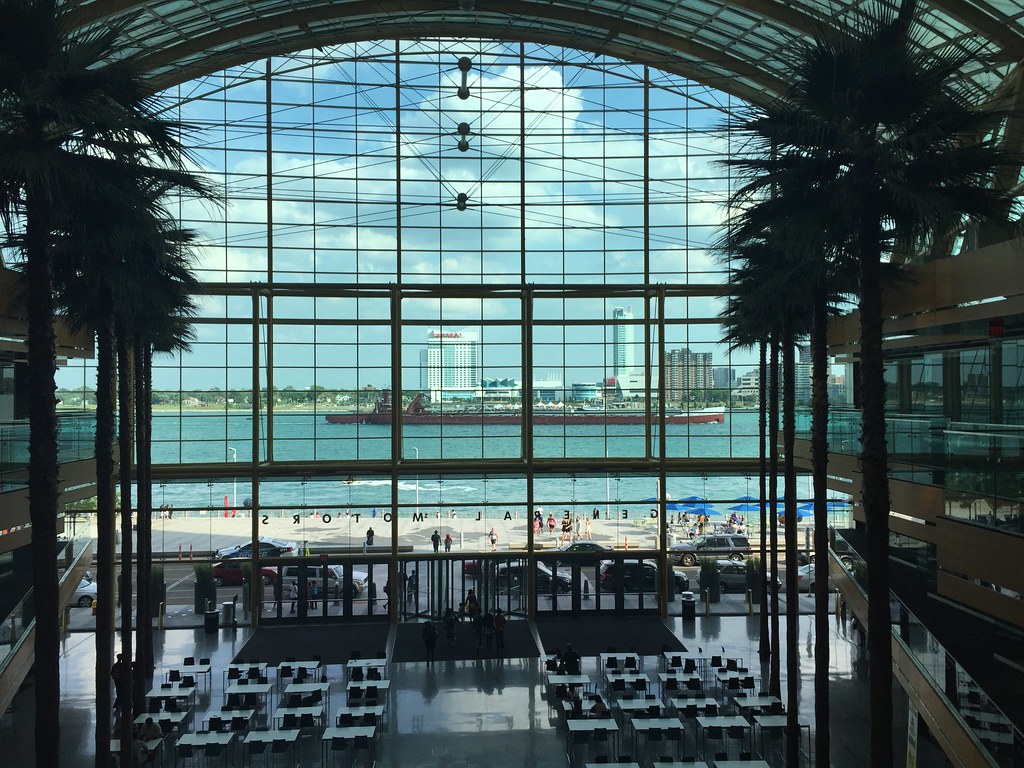 On our tour we spent time around the stadiums, Greektown, passed the Joe Louis memorial, saw the Ford and Penobscot Buildings, etc. When they were headed to some places we had already visited, Mark and I cut out as the tour was already in overtime. I really like this company for walking tours, Forest and I did one in Mexico City that I was really impressed with also.

That night we met at the Motor Bar in the Westin for cocktails before taking an Uber to Hazel Park, about 30 minutes away, for dinner at Mabel Gray. 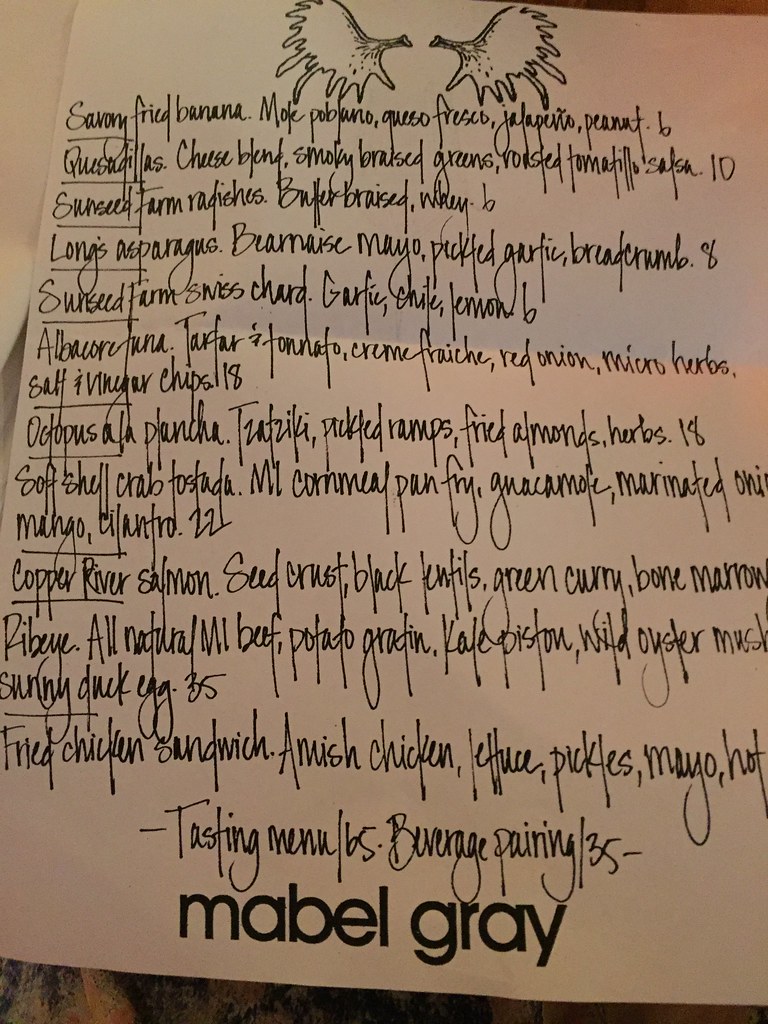 Wow! We had the tasting menu with wine pairings and everything was spectacular. The restaurant itself is very casual and looks like a diner. It is also a little loud, but I think that was mainly the table of 6 next to us who were very drunk and seemed like they hadn't been let out of the house for a while. My poor brother got a whole glass of red wine spilled on his khakis as one of them accidently knocked it across the table! 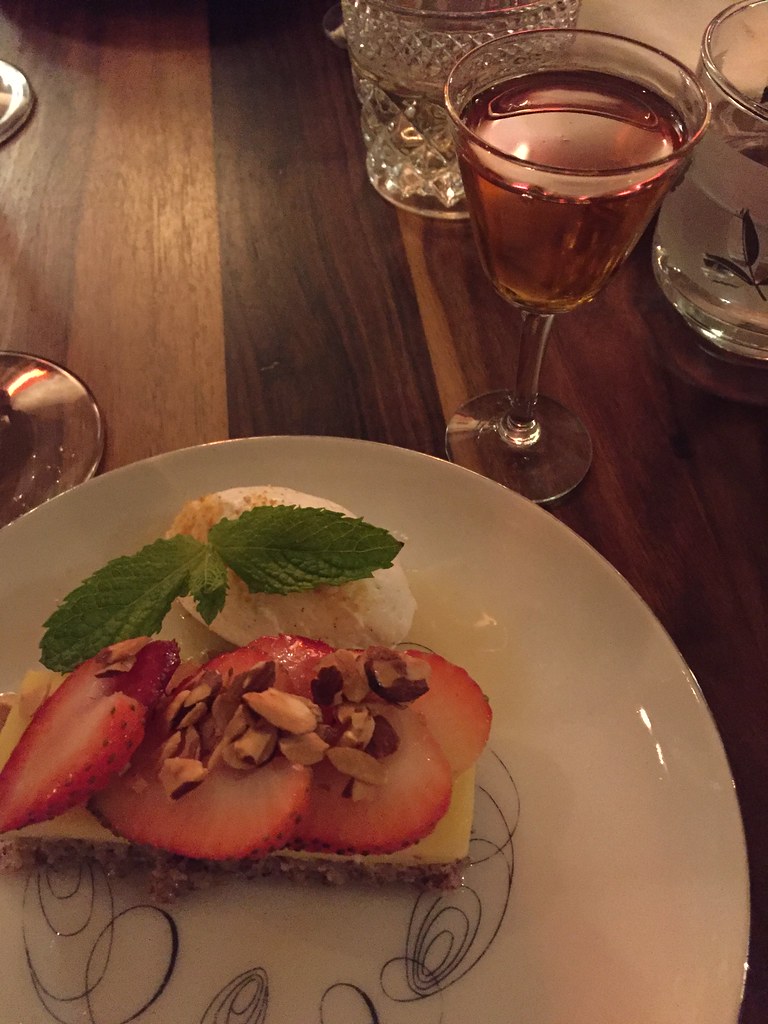 Once they left, we enjoyed the rest of our meal and ended up closing the restaurant down. On our drive back into town it became very apparent how much of the city's buildings were abandoned as whole blocks were just completely dark.

We started our last day at the Roasting Plant for coffee, a peek inside of CompuCom's HQ with its awesome lobby water feature, and one more visit to the Guardian Building, this time getting into the Bank of America area. 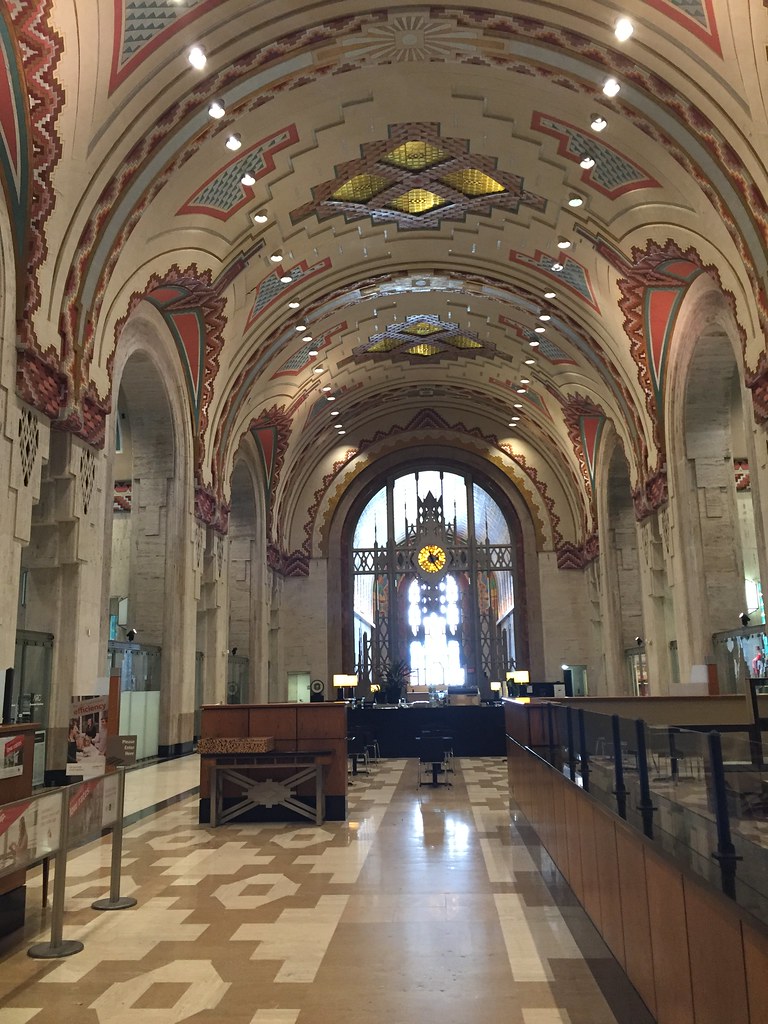 We grabbed an Uber and had her take us to the infamous Michigan Central Station. Abandoned in 1988, this hulking building sits crumbling while bicyclists ride on the paths that once were train tracks. There are ongoing battles between those who want it demolished and those who want it saved. Kindof like the city itself I'd say. 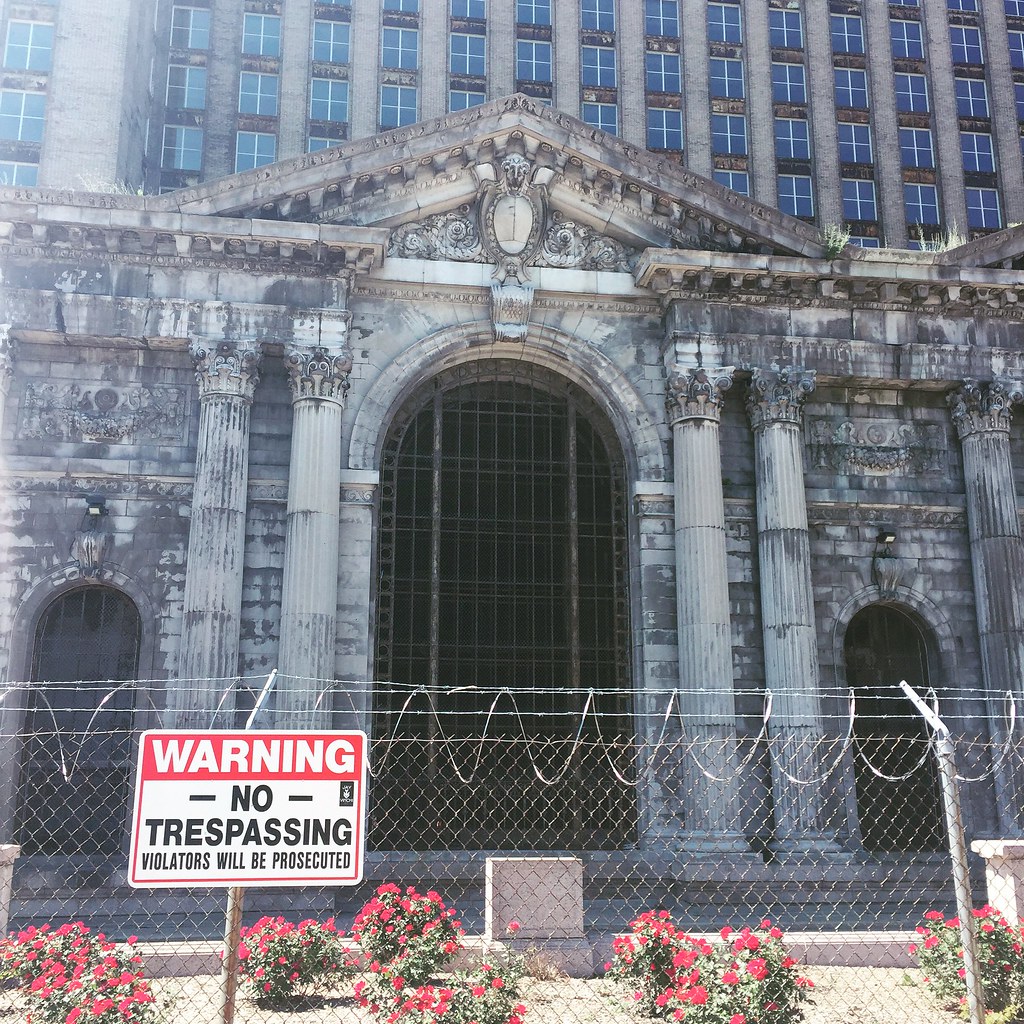 We walked over to Slow's BBQ for a good lunch before walking back to the Westin through Corktown. We walked along parts of Michigan Ave that are still brick, past the lot where the old Tiger Stadium was, towards the skyline of downtown Detroit. It was all very quiet. 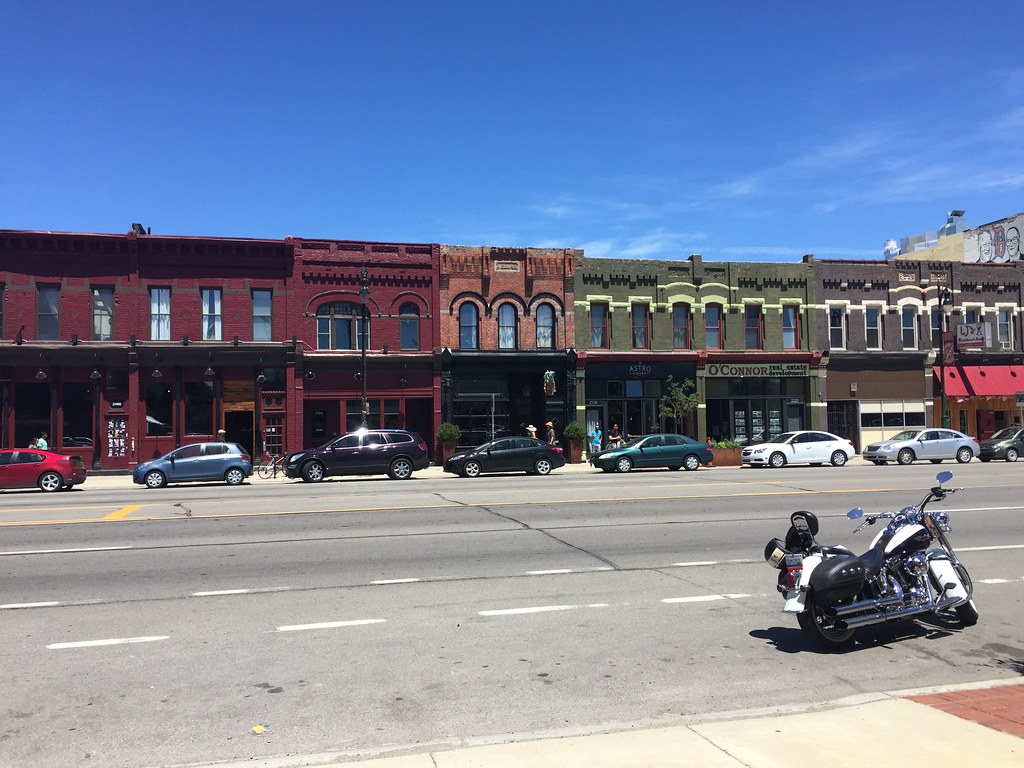 I'm so glad I went to Detroit, and even more fun was experiencing it with my brother. It's a complicated situation for sure, not just the issue of jobs and attracting younger people, but what to do with these buildings and how to connect the suburbs which are so far away. We'll all just have to wait and see! 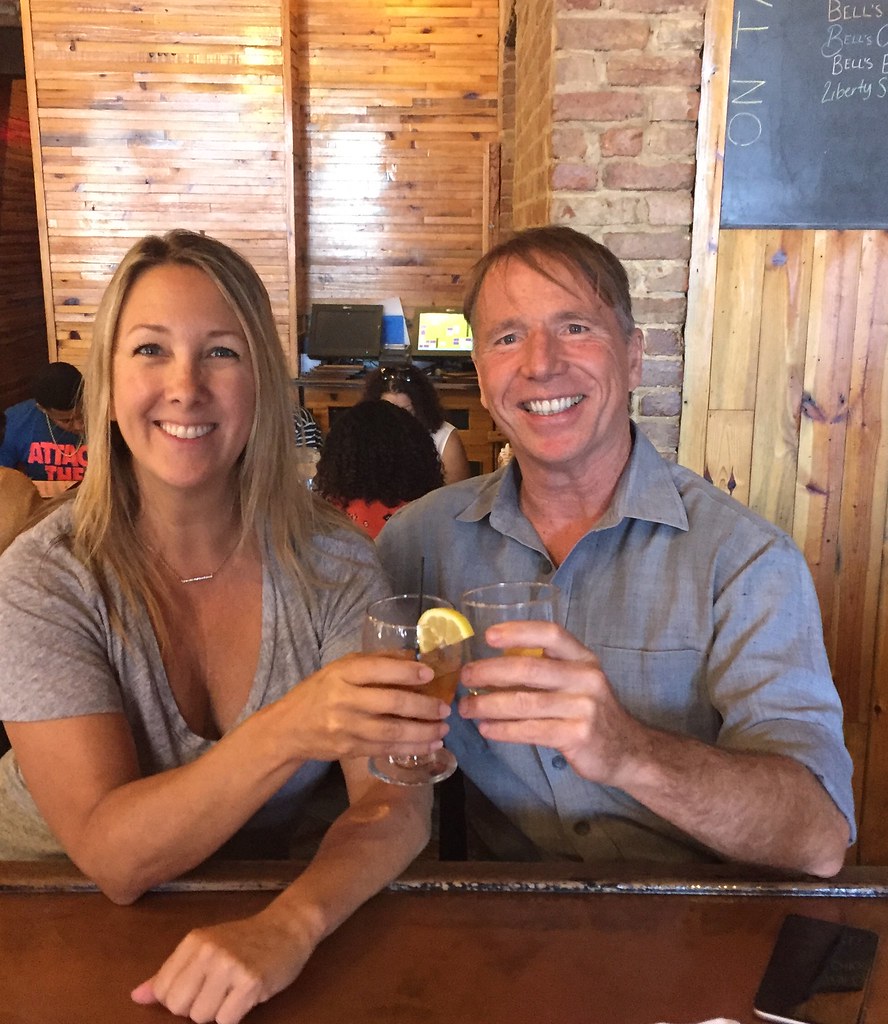