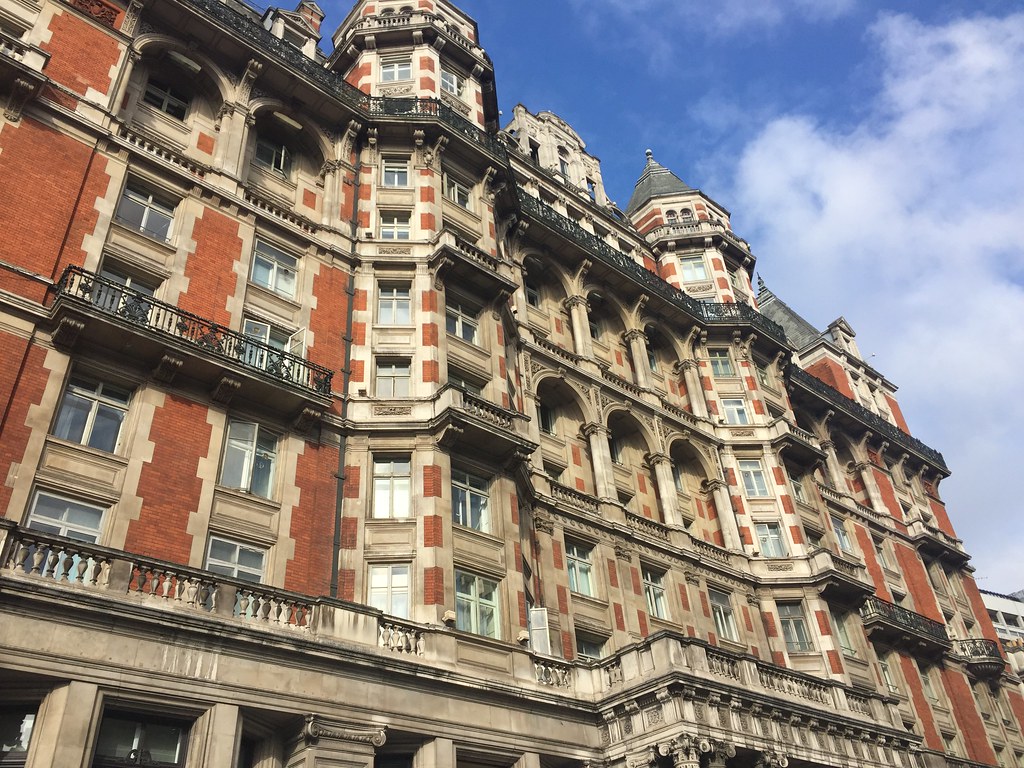 Day three in London and another gorgeous fall day to play around town in. We hopped in an Uber and made our way to Knightsbridge and Harvey Nichols. On the fifth floor, we found the aptly named Fifth Floor Bar. I'd heard in the past it was quite a sight of pinks and greens, giving off a bit of an Alice in Wonderland vibe. Recently the bar had been redecorated with a modern and slightly stark feel. The bar is also a Grey Goose branded bar for the next year.

We had the LCW cocktail which was a perfect late morning tipple of St Germain, prosecco, and soda water in a super cute mini St Germain vessel. The bar itself is fine but I wouldn't go out of my way to visit. If I were shopping downstairs, however, I would indeed pop up. 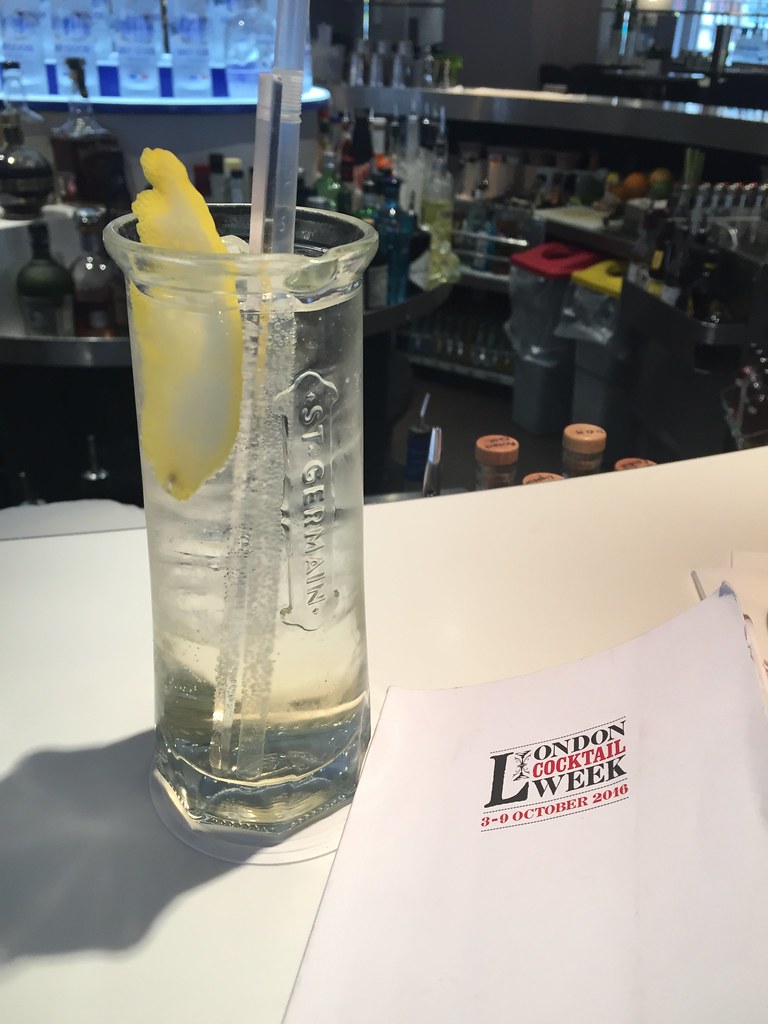 We were just one-and-done here as we were heading across the street to the Mandarin Oriental where we had lunch reservations at Dinner by Heston Blumenthal. I was super excited for our lunch at this 2-star Michelin restaurant which is also #7 on the World's 50 Best list. 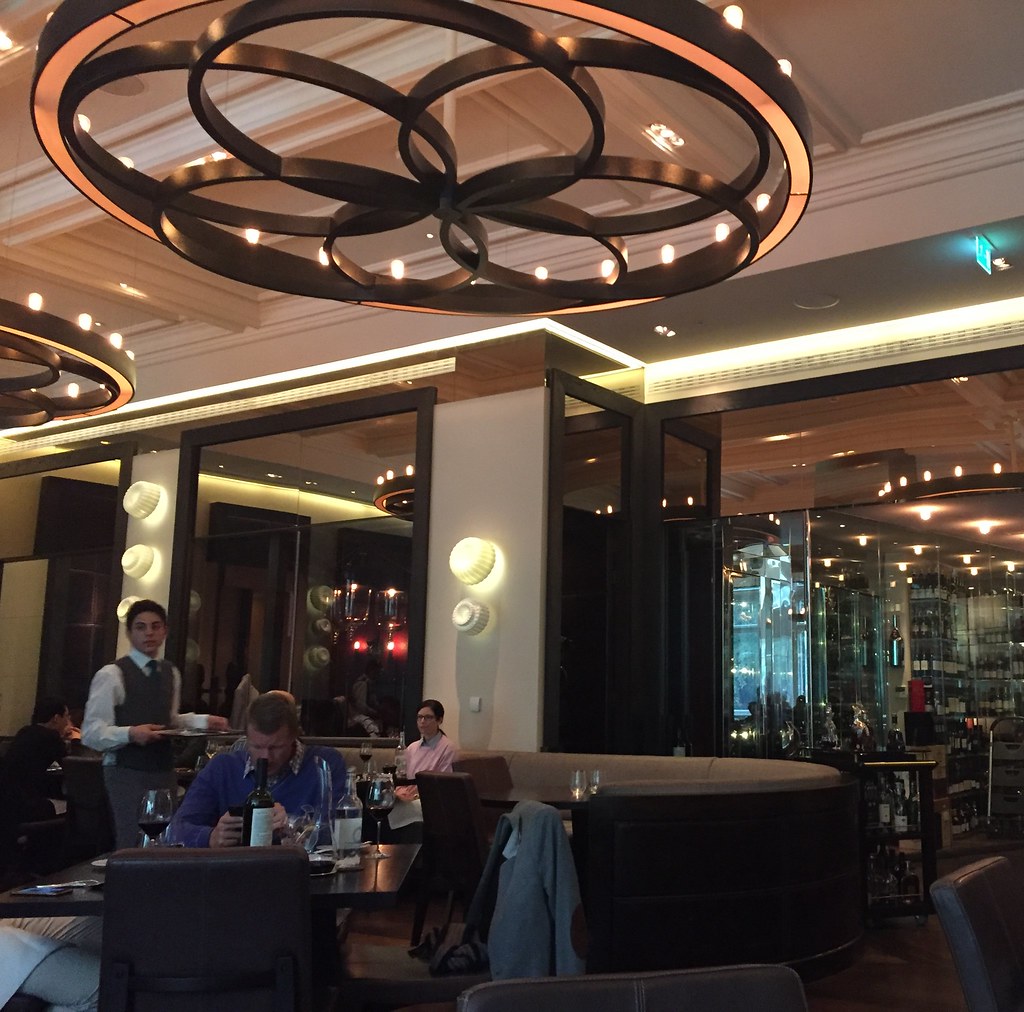 We were shown to a fantastic table right next to the glass-encased kitchen, where we could see all the action as well as these carmelizing pineapples which were hung and rotating in the open grill. We also had a front-row seat, so to speak, of most of the other tables which made for great people watching. The room is gorgeous and their wall scones resembling pudding molds completely charmed me.

We decided to take the set lunch menu and unlike lunch the day before, this time we opted for the wine pairings. We also decided to start with a delicious glass of champagne. We make great decisions. 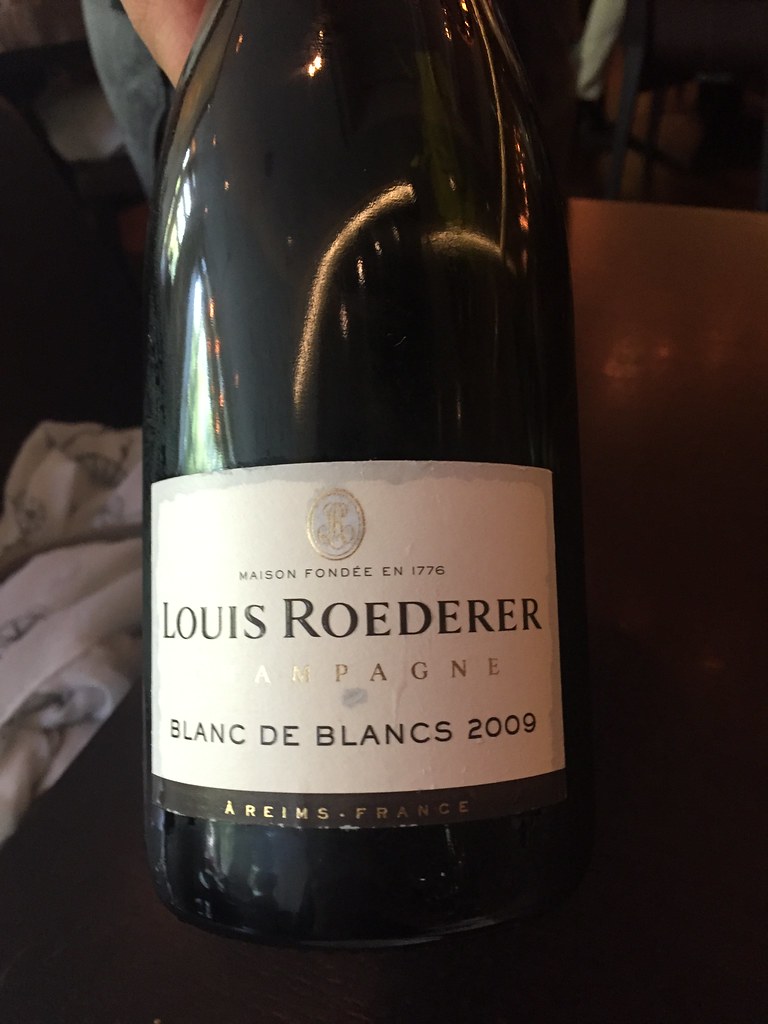 Our first course (we both ordered the same) was a salad of dressed snails on grilled lettuces and served with a really lovely Greek white. I loved the different textures and temperatures of this! And I love snails!

My second course of pork belly was amazing! And the Saint Joseph Rhone red went perfectly. Forest had the halibut and although it was good too, it didn't stand up to the pork.Throughout this our service had also been exceptional, the somm, in particular, had been great at chatting wines with us and changing things up a bit based on our preferences. 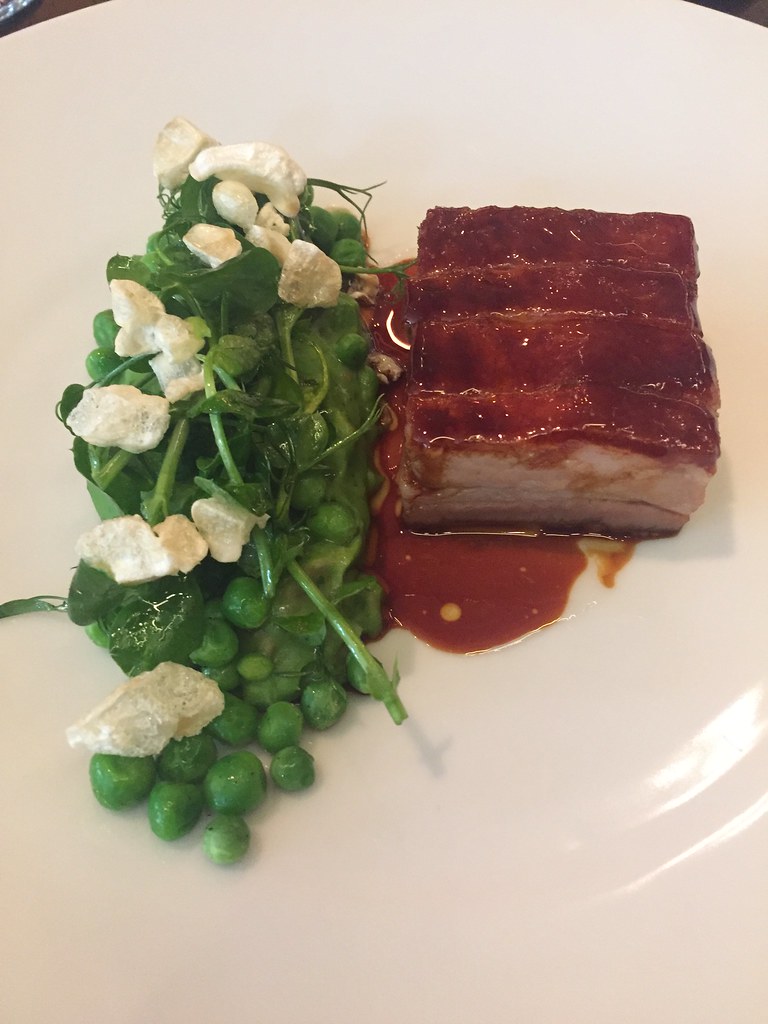 We ordered one each to share of the British cheese plate and the chocolate and yuzu dessert. Both were lovely but the cheese plate was really great! One dessert that wasn't an option on the set menu was tableside-made icecream. A very fun bit of whimsy in an otherwise proper setting! 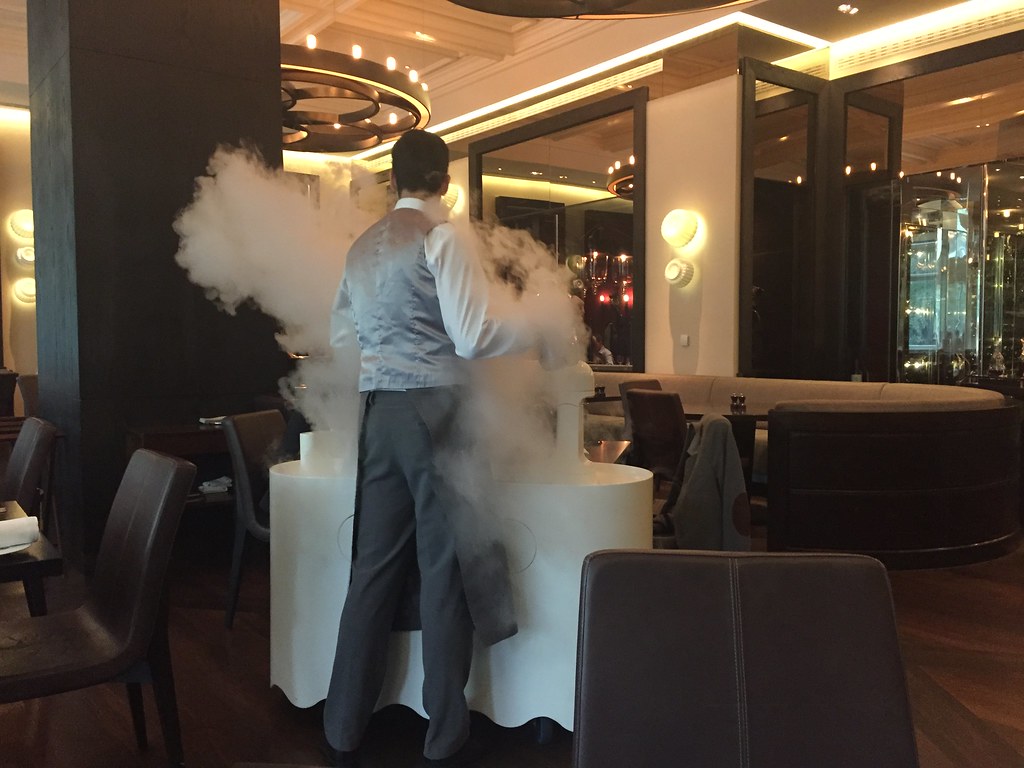 I'd say the entire meal was a big thumbs-up but to be fair we did have an unusually long wait between our first and main course and also a tiny snafu with the bill. They had charged us for a wrong wine and it wasn't a big enough amount to ask them to fix it but honestly at this level of dining that should never happen. Regardless we had a lovely multi-hour lunch and it was time to head out to explore more of London's finest cocktail bars!

Talk about opposites, we grabbed an Uber and were whisked away from the posh Mandarin Oriental to Hoxton and the cocktail-driven dive-ish bar White Lyan. This bar had made a huge splash on the scene for serving delicious drinks in an environment using no fresh ingredients. All cocktails are prebatched and bottled, using really interesting ingredients. Forest ordered the LCW cocktail of Jack, cold brew coffee, and house cola while I ordered the Salad with gin, lettuce, herbs de Provence, and apple soda. 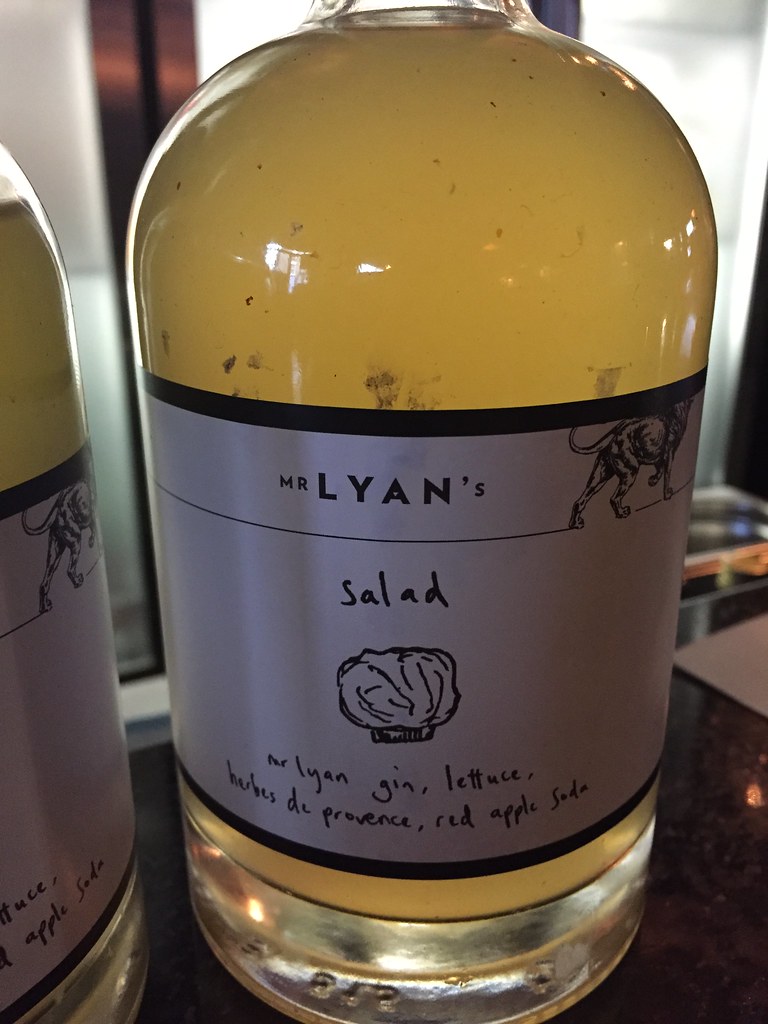 From Hoxton, it was a nice walk to the Shoreditch area where we had reservations at Nightjar. I'd been before on my last visit to London and had absolutely loved it here; this time didn't live up to that visit but the bar is still doing some very interesting things. My issue was more in the service, and specifically about all these "rules" they seem to have going on. When I made the reservations online I specifically asked for seats at the bar but when we arrived we were told that only three people are allowed at the bar at a time (even though there were six barstools). The waitress said they'd move us up after the others left. 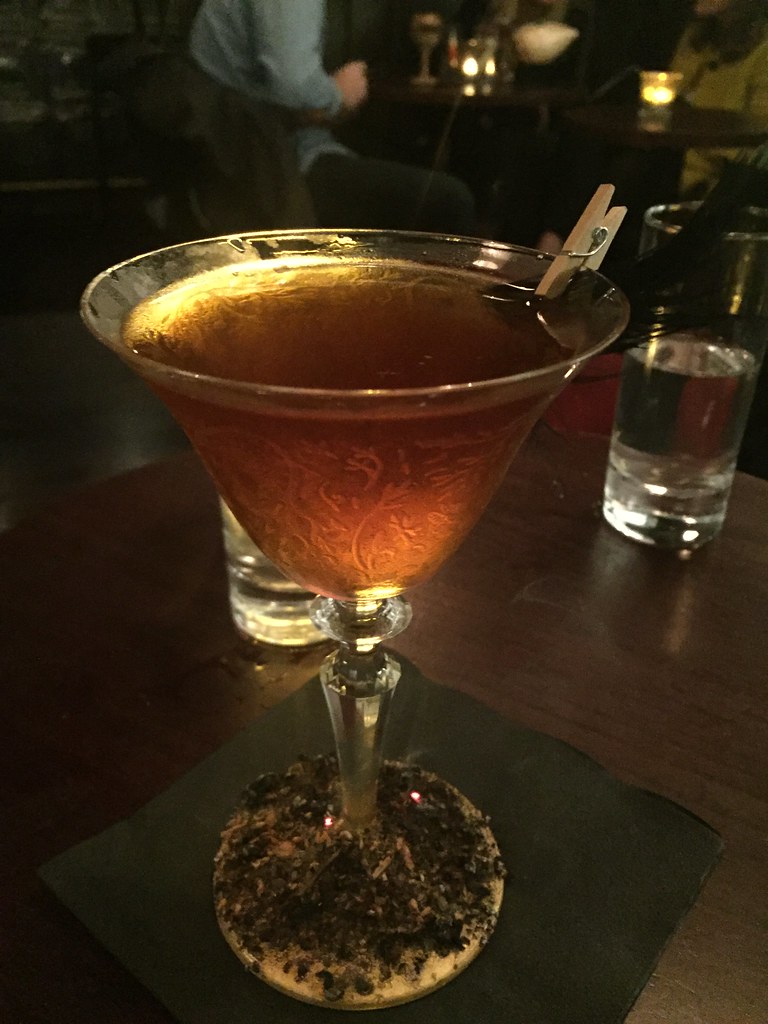 My Cocktail a La Louisiane was delicious and came with a "voodoo smoked" base. We had a few snacks and decided to have a round two. When we ordered we asked about moving up to the bar since it was now empty and she told us she would check. Then a man was shown to a seat there! When she returned with our drinks she said "I know what you're thinking but that is one of our delivery guys". He had a great time drinking at the bar!

Before we left she brought us a round of pretty punch as she knew we were frustrated. If they would have just said upfront, "nope, won't work tonight" it would have been better.

Another easy walk, this time to Islington and The Gibson. This wasn't originally on my list but everyone was talking about it at the 50 Best Bar awards the night before. Brand new, they hit the list for the first time at number 6! Unfortunately, as this was Friday night, the little bar was packed and we couldn't get a seat inside. We grabbed a table out front on the sidewalk and ordered their LCW special The Gibson Martini with house pickled onions and beef tartare canapes. Both were good but sitting outside under heat lamps just didn't give us the experience that we were looking for.

We headed back to our own hood and decided to try again to get into Punch Room. We had stopped in on our first night in town but they had a private event going on. This time we put our names on the list and were told it would be about 30-minutes. We walked into Berners Tavern, the other bar inside the London Edition hotel, and were lucky to get seats at the absolutely beautiful bar. The whole room is stunning! 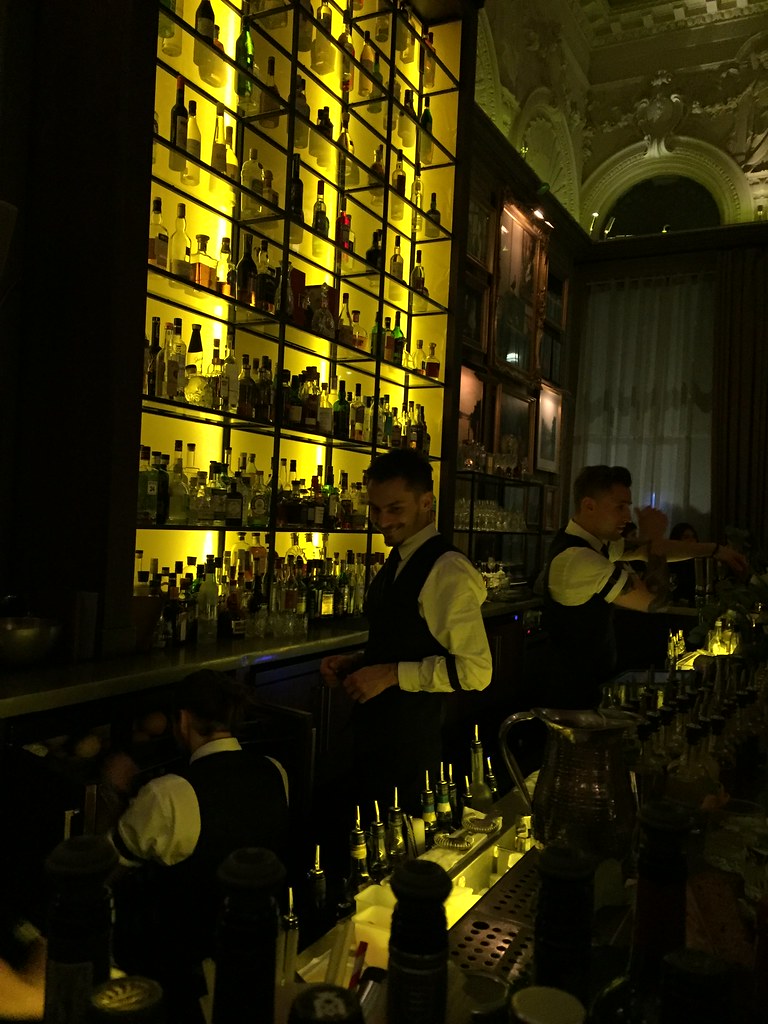 Gorgeous space, delicious drinks, over-the-top nice bartenders. Our names never did come up for Punch Room but we had a great time here; I'd absolutely recommend a stop in if you are in Soho. The food looked fantastic as well.

And with that, we finally called it a night! 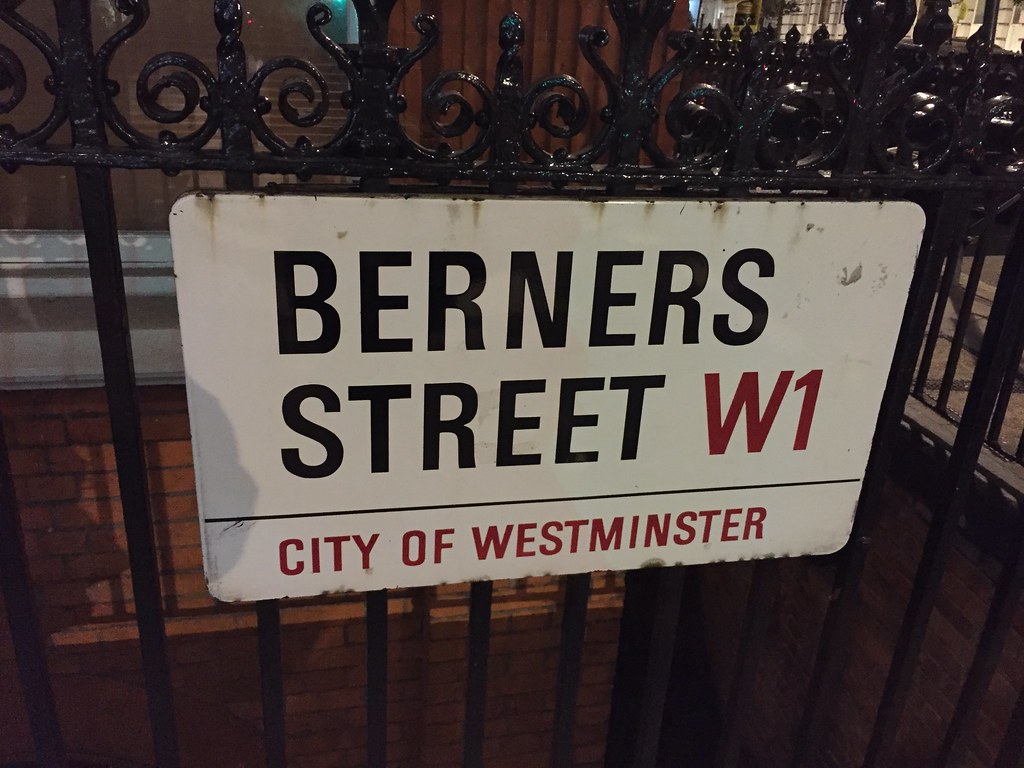