Last April I had the opportunity to travel to Mexico City to cover the highly spirited cocktail convention Tales of the Cocktail On Tour. I love these mini-Tales as I call them, since the location changes every two years.

I wrote all about the seminars I attended at TOTC for World's Best Bars, Forest wrote a great piece for them too, but I never got around (surprise!) to singing the praises of the sites of the city, its food, and its cocktail bars. With TOTC starting up this weekend I thought now would be the perfect time to remedy that!

Most people don't think of Mexico City being a craft cocktail destination, but I found so many great places over the course of the week that I have to say it is indeed exactly that. One evening Forest and I headed to the posh neighborhood of Condesa for a cocktail crawl. We started at Felina and immediately felt that we could have been in any number of metropolitan cities known for their cocktail bars, around the world. The decor was midcentury modern with splashes of blue and gold throughout. Large windows were open letting in fresh air, light, and the sounds of the neighborhood. The menu was filled with interesting variations on classic cocktails as well as house creations. And they try to keep the prices fair to attract the local writers and musicians. I liked this little bar and the people working there so much that I came back five days later with my brother and had another wonderful experience. 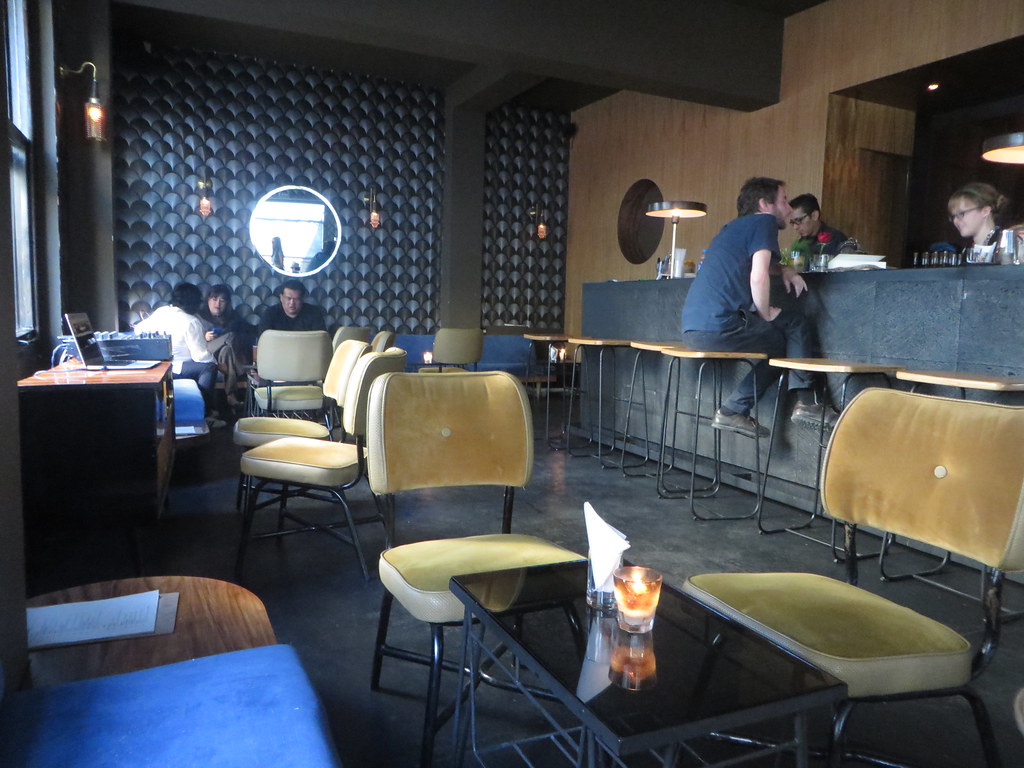 Next up on the crawl in Condesa was Baltra Bar. There's an interesting botanical theme going on in this quirky bar, from the decor to the menu. It's odd, in a good way, with tiny stools and little booths, funny curio cabinets, and very unique ingredient combinations in the drinks. 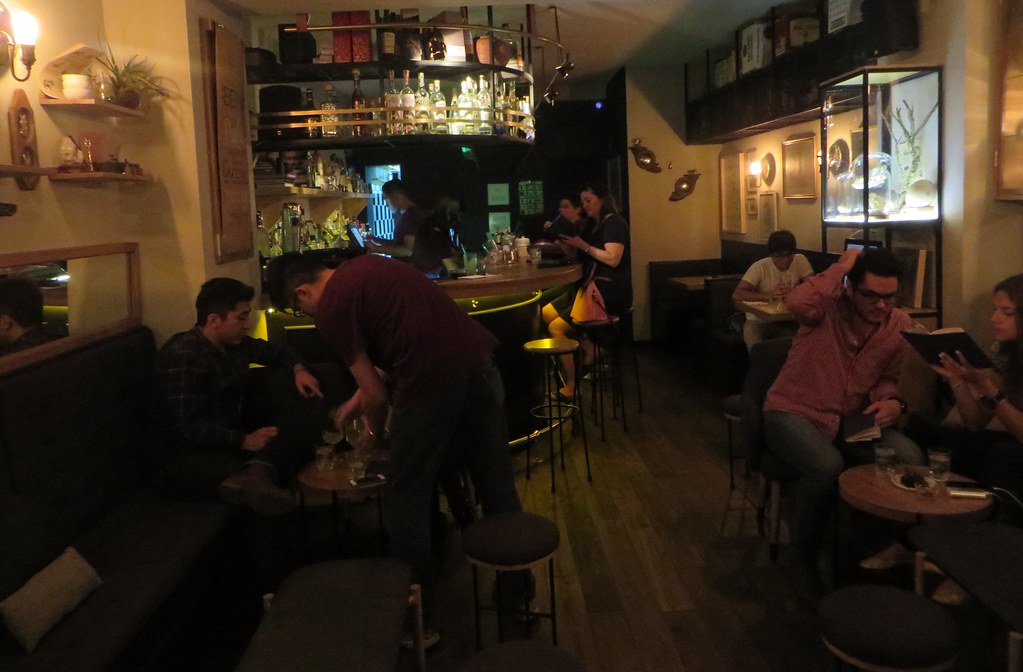 TOTC highlights different bars on each night so we purposely chose these two since they were being highlighted on a different night in order to dodge the crowds. But now we dove into the madness and made our next stop the very popular Limantour in Roma Norte (there is another location in Polanco). Limantour arguably put the city's cocktail scene on the map and has had some amazing bartender talent. But no matter how strong your game is, if you pack people into a craft cocktail joint, to standing room only numbers, the magic is lost and you're left with just a sticky mess. Too bad, as they were featuring guest bartender Shingo Gakan, an incredibly young and talented bartender who left Tokyo for NYC not speaking a lick of English. 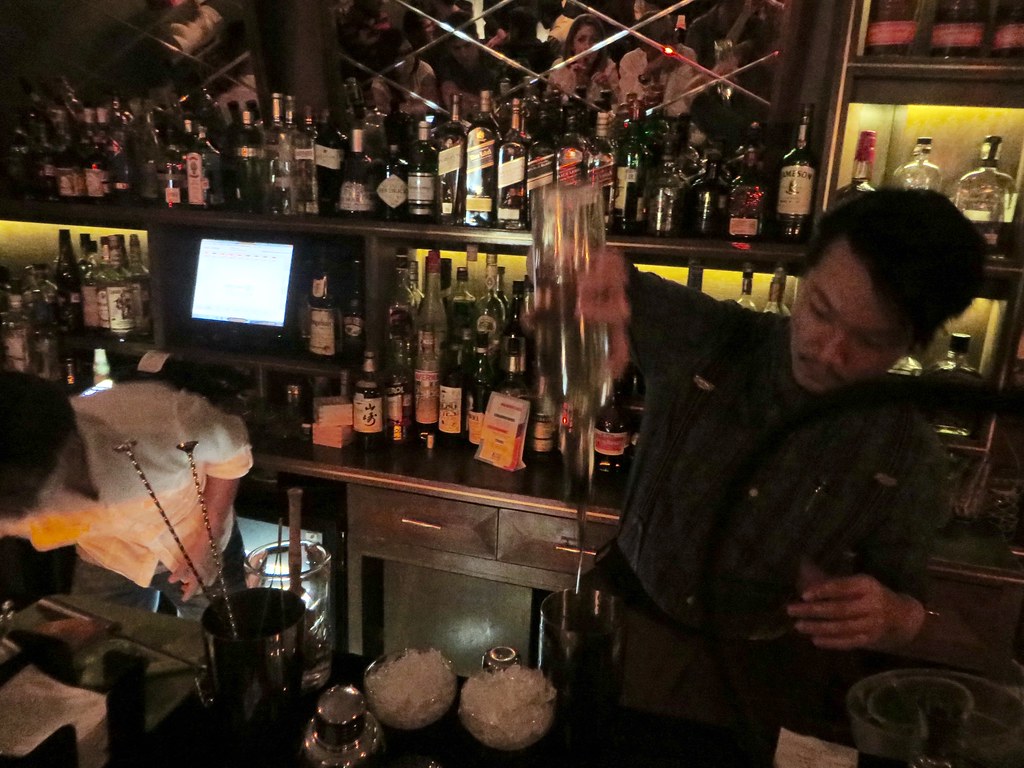 I was intrigued by Limantour though, so after TOTC ended I revisited the RN location. My brother and I started upstairs and had solid but not outstanding drinks. We moved downstairs and here the drinks were great, and our server was very nice and the experience much better.

(*11/16 edited to add that Limantour took #13 at this years 50 Best Bar Awards, proof that each experience is indeed different*)

Forest and I also stopped into Jules Basement, which was participating in a TOTC takeover. The premise of this "speakeasy" is fun; hidden in the basement of a neighborhood taco shop called La Surtidora. You have to find the restaurant and then figure out that the meat-locker door is really the entrance. Once you get past the doorman, you descend into the dimly lit basement bar. It was so busy with industry people though, and the DJ was so loud (get off my lawn!) that we only stayed for one drink before leaving. I would go back and check out this place on a weekday (as I don't like DJs) because the cocktail menu looked quite good.

Another night, another bar takeover was going on at Puebla 109, this time with Jim Meehan. The drinks were great and Jim is a consummate professional, taking time to say hi and briefly chat with people, but the space is just too small for the large group of TOTC attendees. 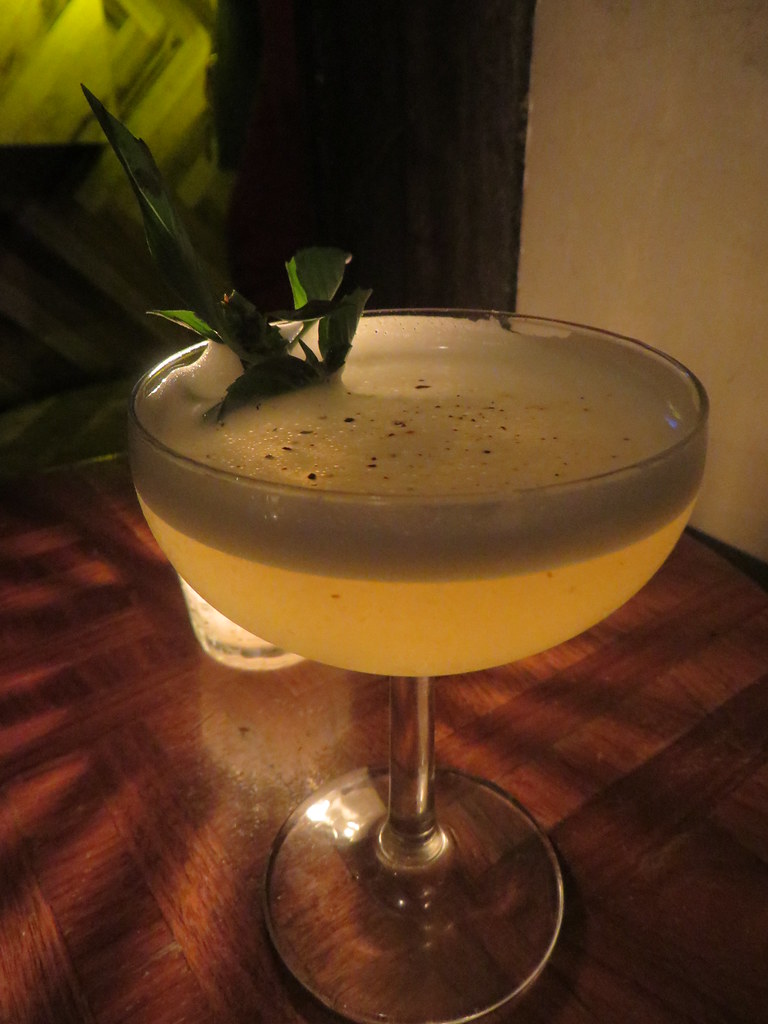 My brother and I found a really funny old place while walking around one evening called La Opera Bar. Although I wouldn't rush here for the creative craft cocktails (there aren't any), I would pop in for the atmosphere, and the people watching. It seems to be a popular place for the downtown business people to go. And the decor and staff were both very entertaining! 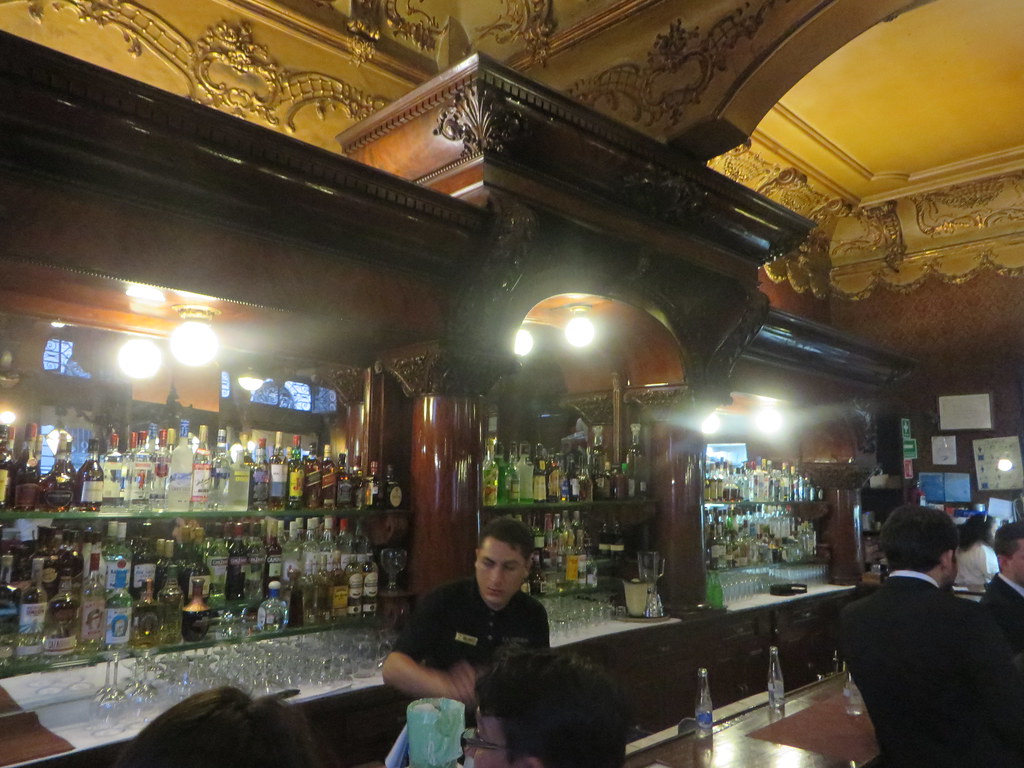 One of the most interesting drinking experiences I had was when Forest and I talked our local tour guide into taking us to a traditional pulqueria. He was swayed when we mentioned we'd buy his drinks! He led us to Pulqueria Duelistas in the middle of the afternoon, which was packed with a mainly younger clientele. We shared a table with some Chilangos who didn't speak English but our guide helped to translate our questions to them about which flavors they liked best. This thick, viscous byproduct of Agave isn't for everyone, but with flavors like oatmeal, mango, and Oreo they are pretty easy to try. You can order by the small glass, big glass, or pitcher, but beware, this drink is incredibly filling! I took my brother a few days later and we had a ball drinking with the locals again! 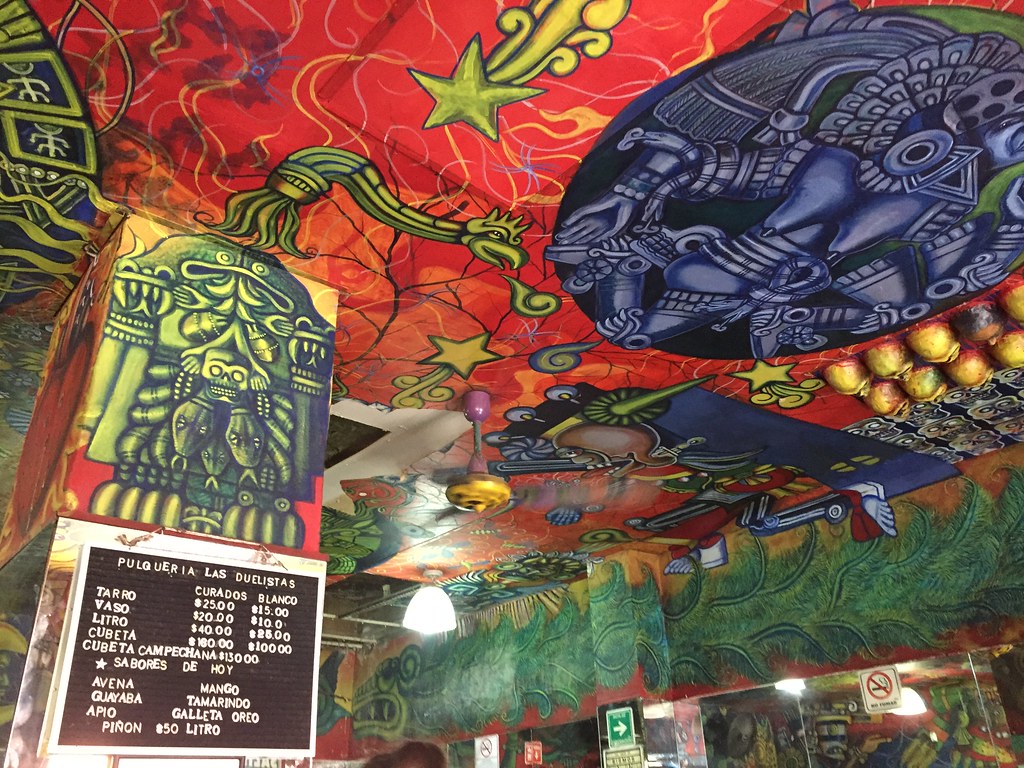 One night Forest and I went to check out The Monkey Bar in Roma Norte, but after sitting down and looking at the menu and seeing all the mass market product placement we decided to head across the street to El Palenquito. We had a great time trying different mezcals in this wooden-shack looking bar. Unlike mezcal in the States with their nice labels and wine-like bottles, all the mezcals here were in glass jugs and had hand-written labels on them. Our waiter helped us through some selections and we sat outside at a sidewalk table sipping them. Great experience!

Another great place for drinking mezcal is at La Clandestina. As the name suggests, it is very understated, dark, and intriguing. Here the mezcal bottles are in big glass carboys, again unlabeled. Luckily the servers here are great and making suggestions and my brother, friend Tracy who was still in town from TOTC, and I had a great time and better yet had some amazing mezcals. My brother sent me some photos, after I had flown home, of his second visit to the bar. Seemed he really liked it! 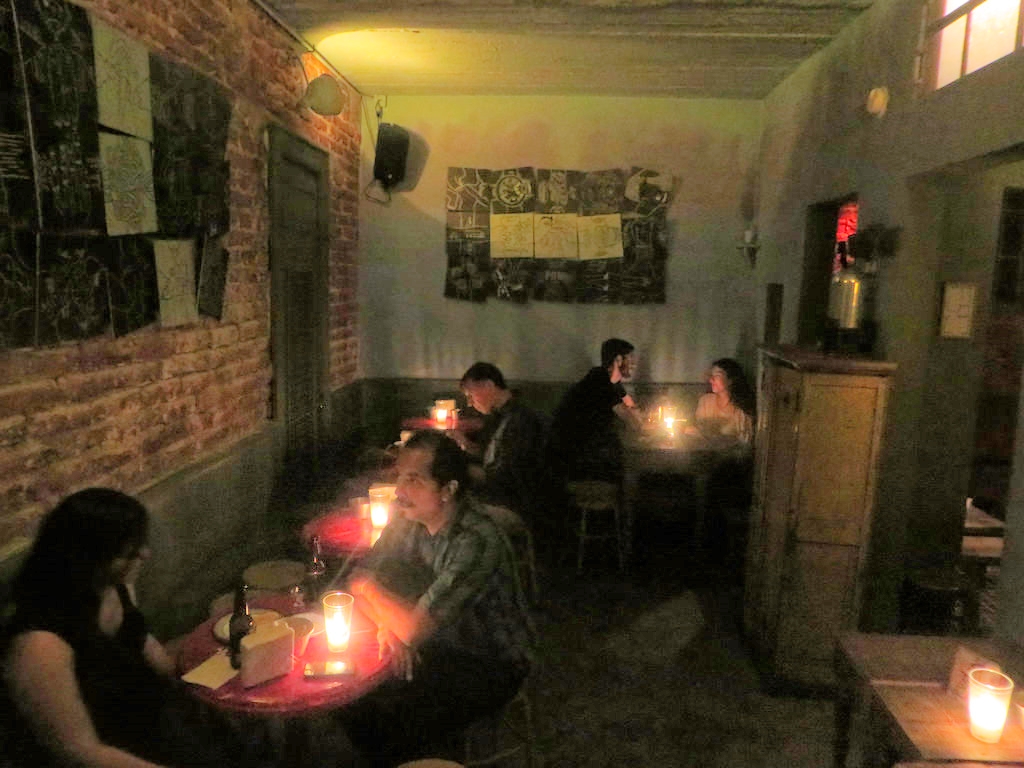 My final mezcal place that I really liked is a restaurant and bar that my brother was told about, Limonsneros. We had an excellent time, more delicious mezcal, and some really good snacks to go with. It's traditional to eat orange slices dipped in salt containing ground-up worms. I don't know why, but it is, and we did, and it was good. Let's call that a protein snack. 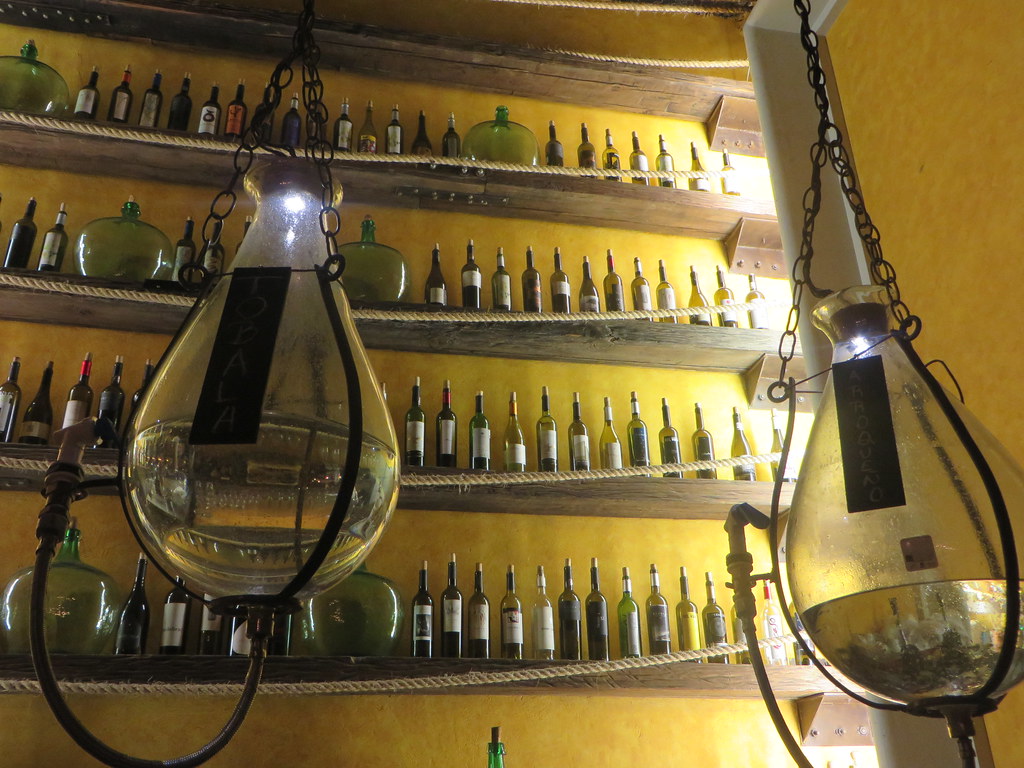 I absolutely loved the huge, clear, vessels, filled with mezcal hanging over the bar. And the service was fantastic here as well!

But of course sometimes Forest and I just had our standard gin martini(s) at the TOTC home base Hilton hotel lobby bar, and my brother and I had aperos at our rooftop bar and nightcaps at our courtyard bar at the Downtown Hotel. Being within walking distance is sometimes more important than a perfectly made cocktail!

Other posts from this trip:
CDMX Markets Tour
Mexico City; From Street Food to Fine Dining
Sights on Mexico City