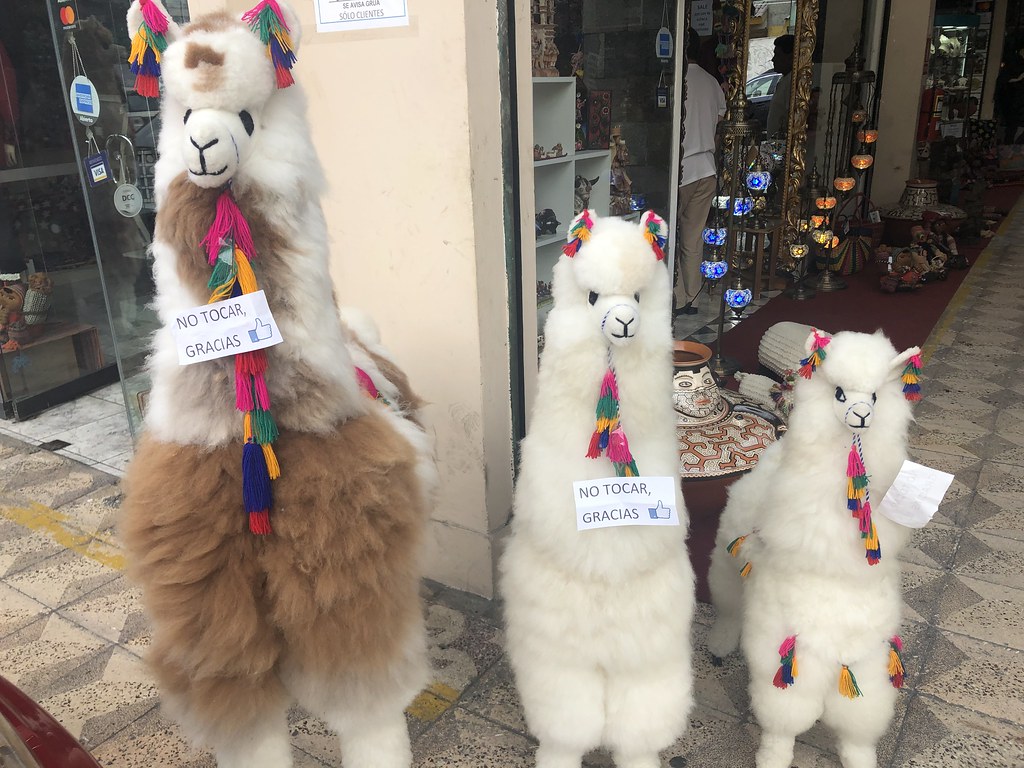 Our big Peru adventure was coming to an end, we had flown back to Lima from Cusco, and were staying at the Inkari Luxury Hotel in the lovely Miraflores neighborhood. I have a theory that if a hotel has a descriptive name, it's usually the opposite experience (Comfort Inn/not comfortable!, Holiday Inn/that carpet does not a holiday make!) And the Inkari Luxury proved my theory. Not horrible but just enough fake luxury to make me annoyed. With so many well priced hotels in Lima I'd look elsewhere next time. You're welcome.

We dropped our bags and headed directly to Mayo Bar for cocktails. Chef Virgilio Martínez moved his famous Central restaurant into a stunning new complex in the Barranco district and just recently opened Mayo and another new restaurant Kjolle in the same space. 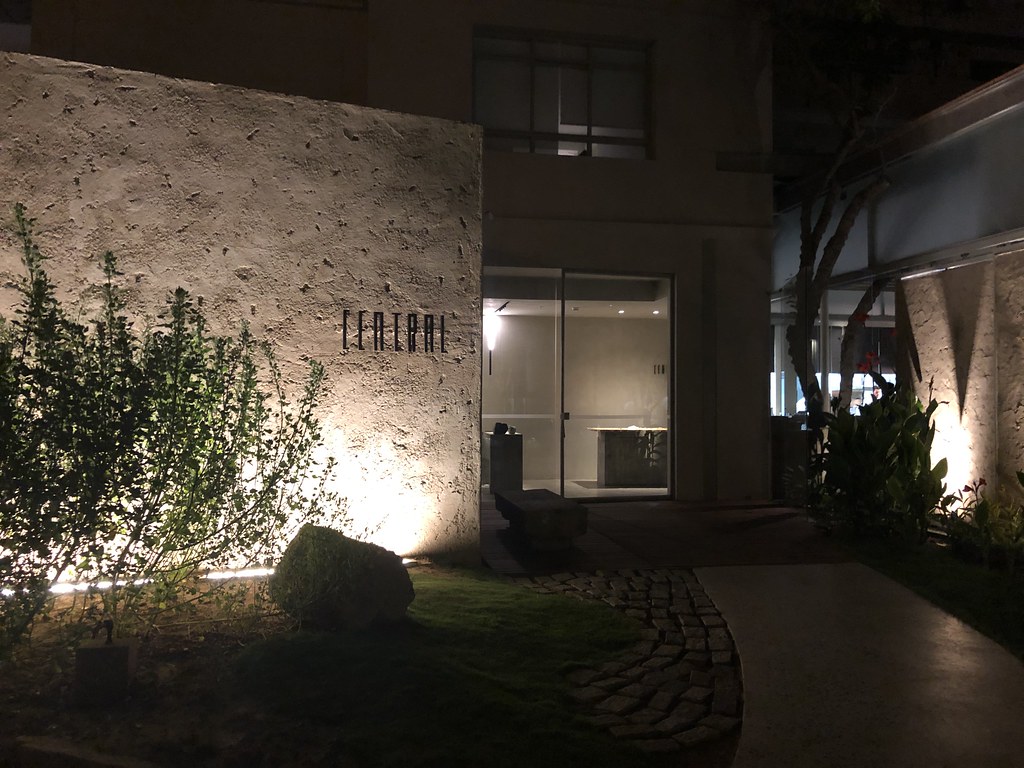 The drinks were very interesting, and incorporated ingredients from different parts of Peru. My drink, for example, was to represent the sea and had sea lettuce in it! We also had some casual bar food (suckling goat!) that was delicious if not overly rich. 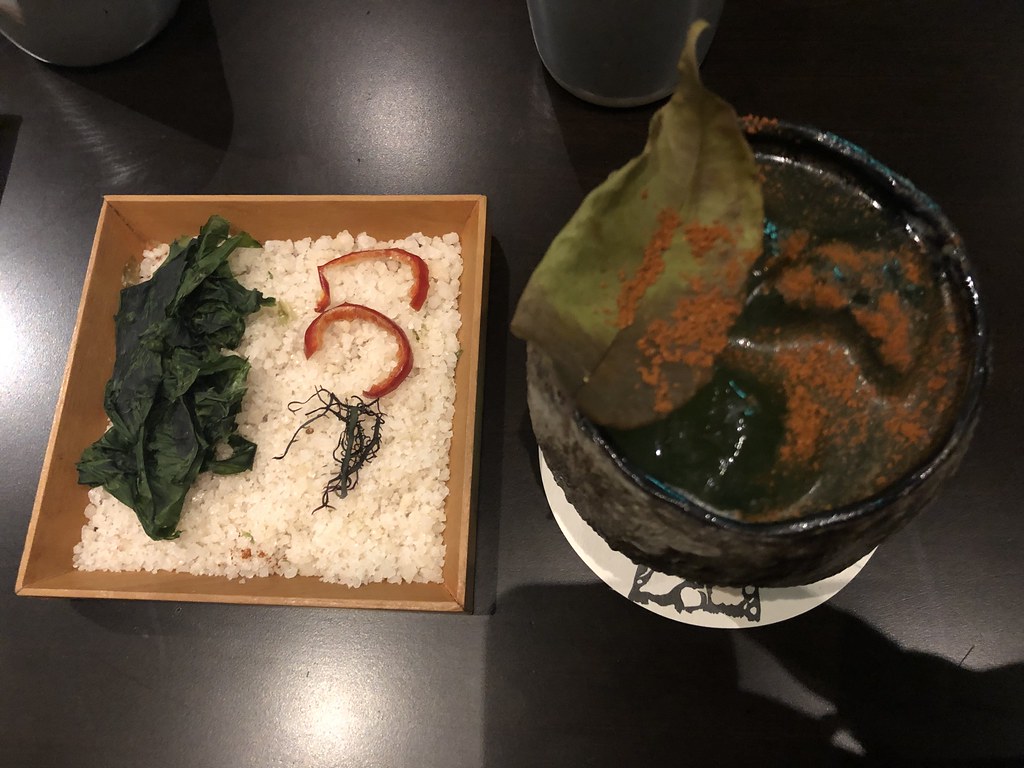 We'd had a long day, both sightseeing in the Sacred Valley and traveling, so we headed back to the hotel where Forest and I taught the bartender to make a passable martini. 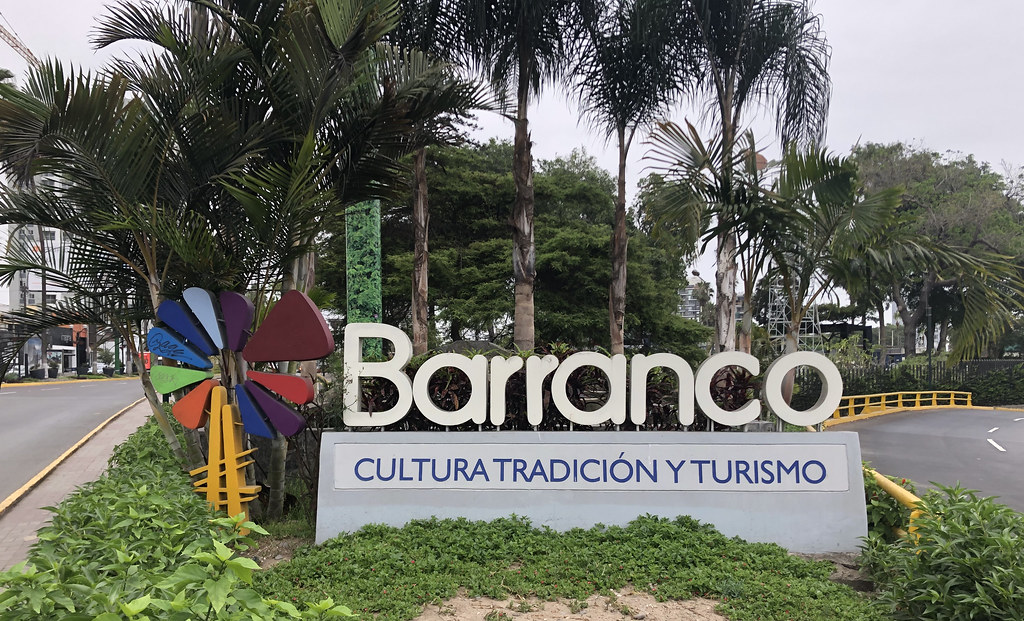 The next morning we made a quick stop at a grocery store for interesting things to bring home and then walked to a very cool shop called Dedalo back over in the Barranco. This place was amazing! There are a bunch of small rooms inside housing different artists' & designers' works. Everything you could want from jewelry, to clothes, to pottery, etc is here and everything is handmade. There is also a great outdoor patio cafe where you can get a beverage and a snack. Highly recommend this shop while in Lima! 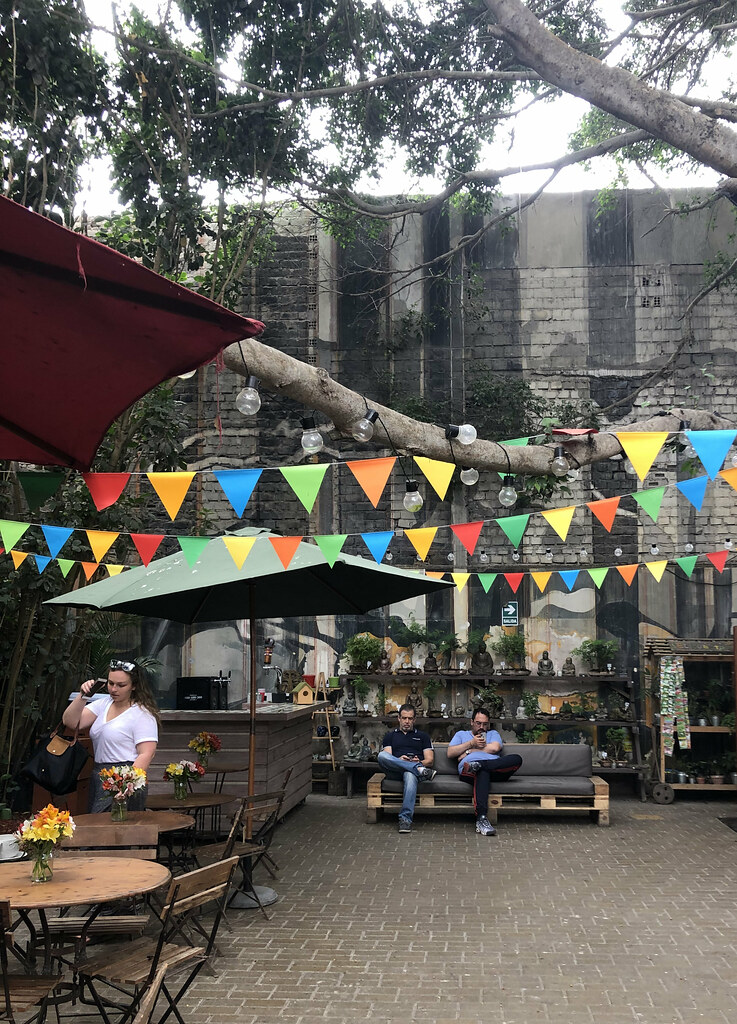 The neighborhood is very nice to walk around in also, lots of old houses with very colonial design. It's definitely a hip and trendy area of town.

We were starving so made our way to our lunch destination Isolina, currently number (lucky?) 13 on the World's 50 Best list. We hadn't really planned this one well as we realized it was a Sunday afternoon and 1/2 of Lima was lined up for a table at the no-reservations restaurant. We put our name in and had a couple of pisco sours at a random spot a few doors down (which were delicious btw!) 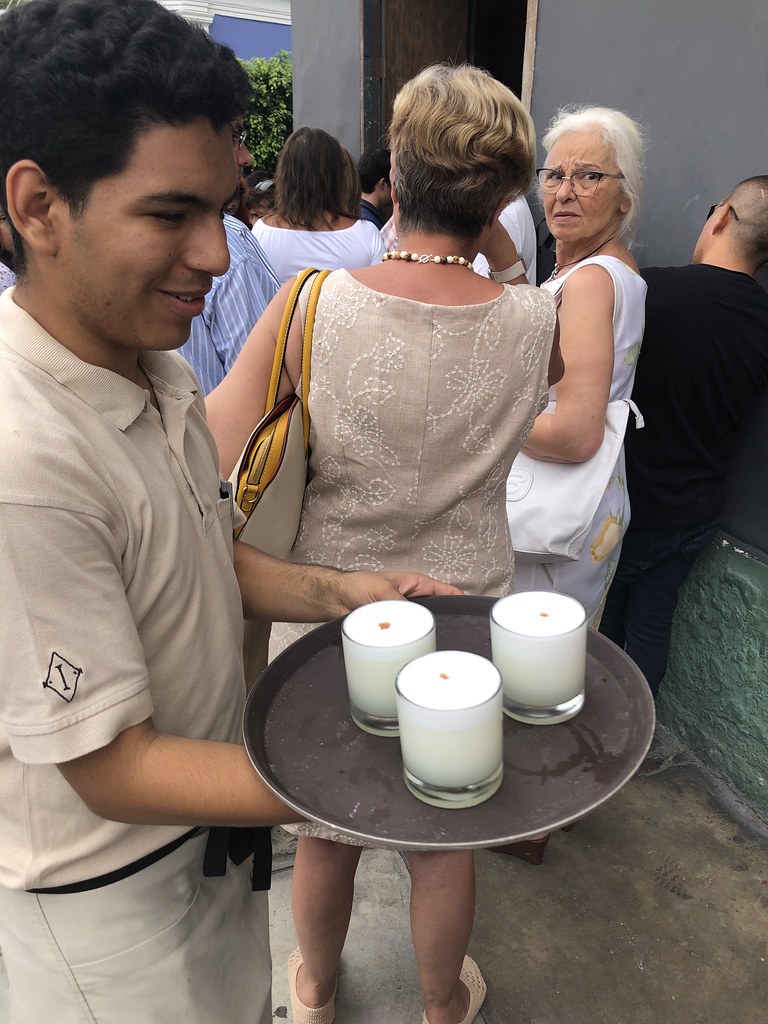 After an hour we went to check in only to be told it would be another 30 minutes. We opted for another round of pisco sours, this time from the restaurant and served to us on the sidewalk. 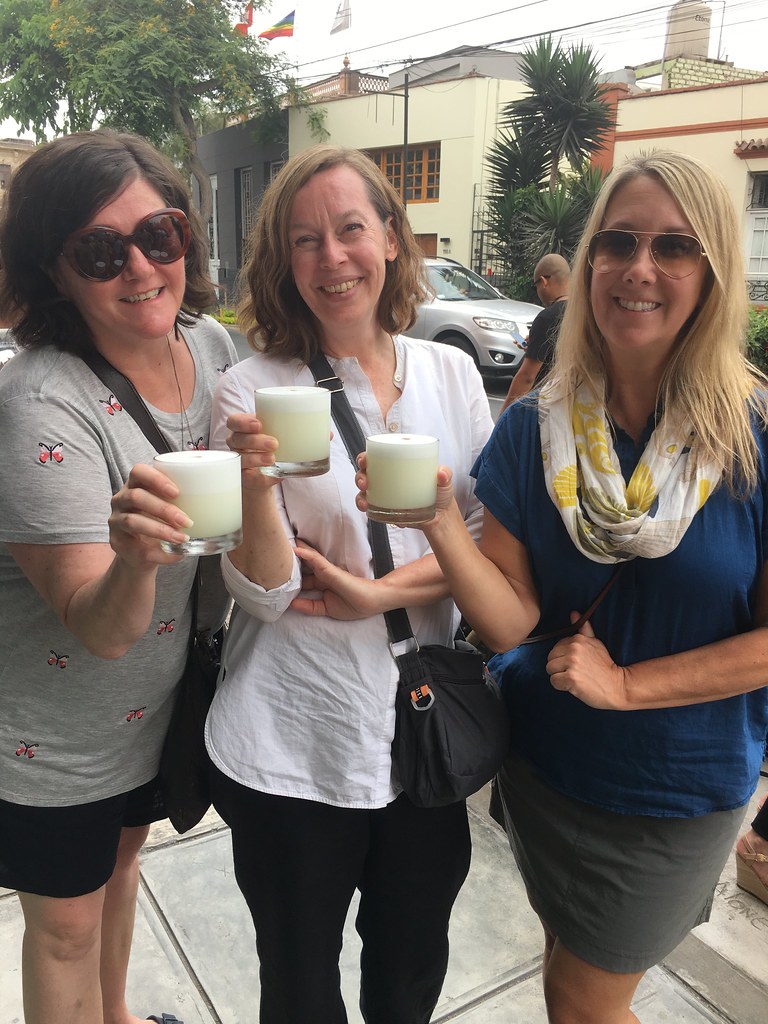 We were finally seated after 2 hours of waiting! And we were famished! Luckily we had had time to peruse the menu and were able to order the minute our asses hit the chairs. Everything was absolutely delicious, especially the ceviche and the crispy pork ribs. I'd highly recommend but maybe work your timing out better than we did! 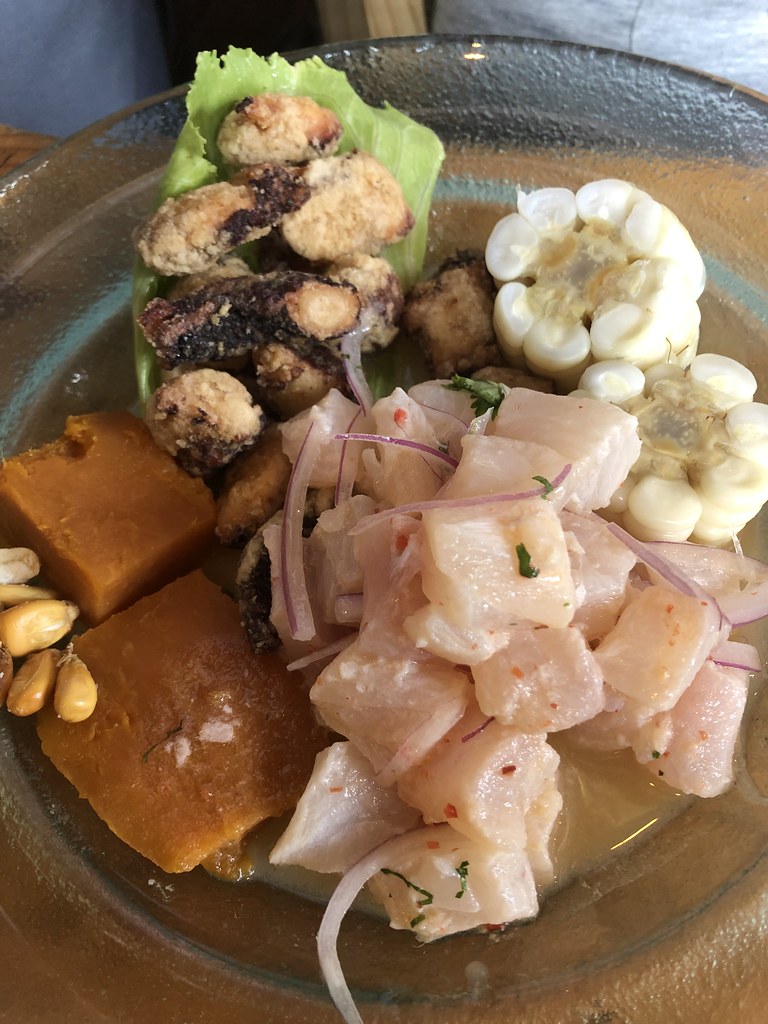 Caitlin had to dash for the airport and Thibault decided to head back to the hotel for a swim, leaving Forest and I up to our own devices. It took us all of about 5 minutes to decide to head back to Bar Ingles, which we'd visited when first in Lima 1 1/2 weeks earlier. 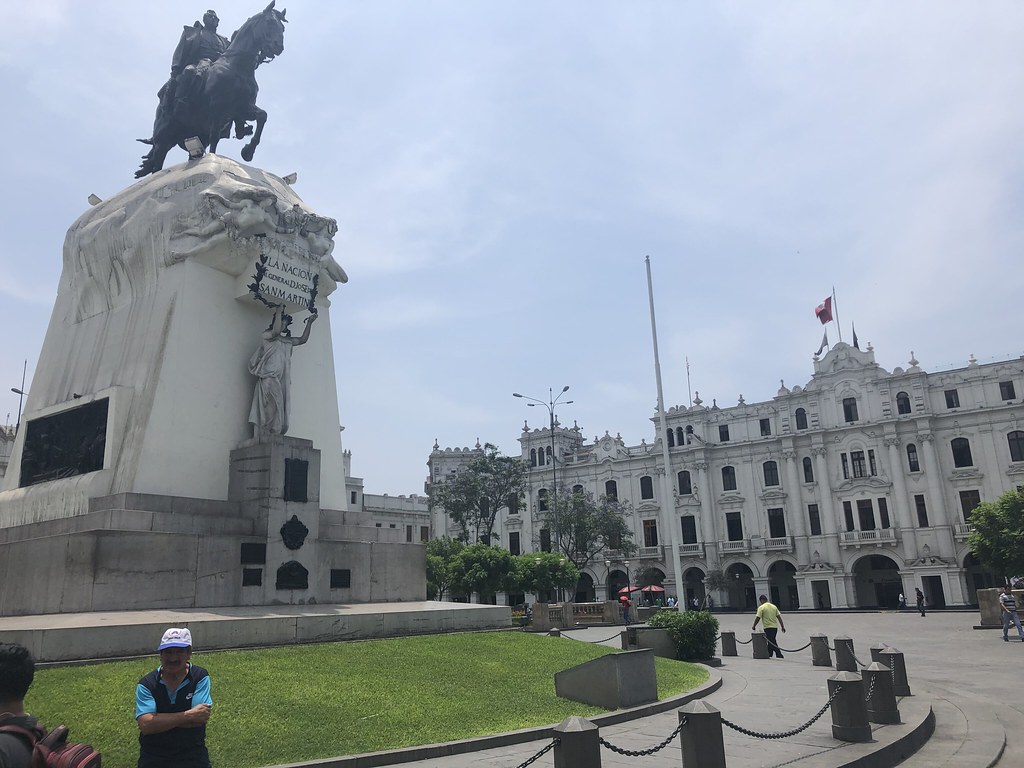 Thibault, Forest, and I set out the next morning to explore the Old Town. We had our Uber driver drop us off at Plaza San Martin, where the city's first hotel still stands. If you get up close to the woman on the statue you will see a tiny alpaca perched on her head!

We walked up the pedestrian only Jiron de la Union where honestly there isn't much to see until you get to the Iglesia de la Merced. The church is as old as the city and held Lima's first ever mass. 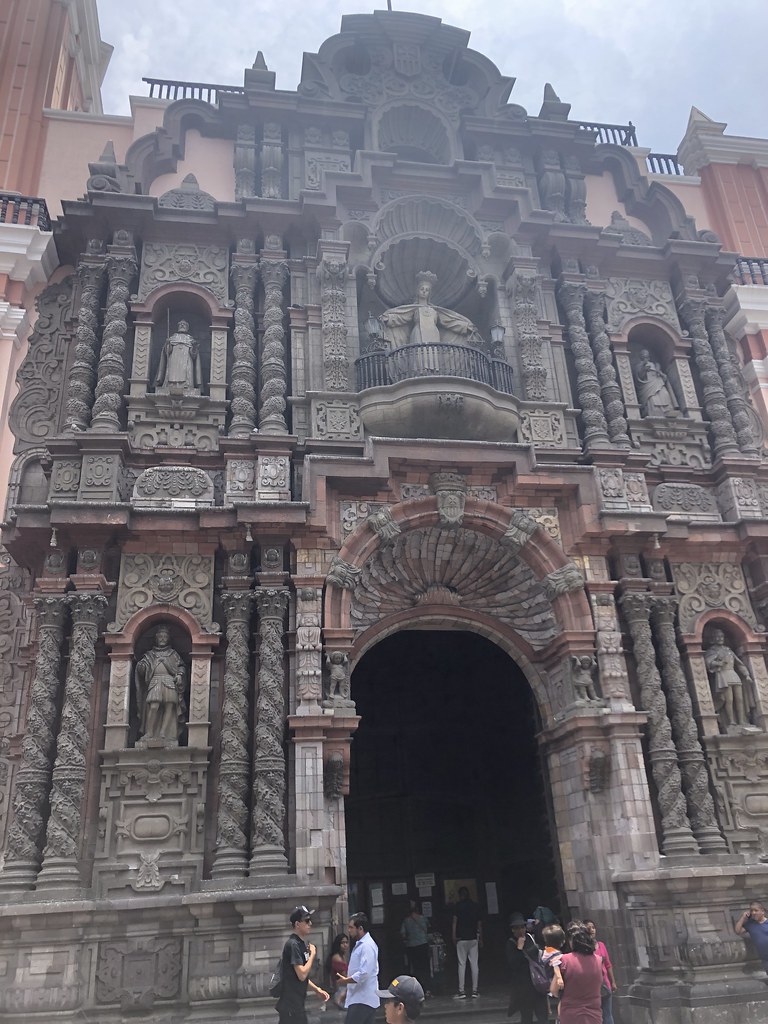 Besides the pretty alter, and impressive and funny Christmas manger scene they had constructed, the church also is home to a large silver cross that once belonged to Father Pedro Urraca who was known to have visions of the Virgin Mary. Worshippers were lined up to place a hand on the cross in hopes of receiving a miracle. 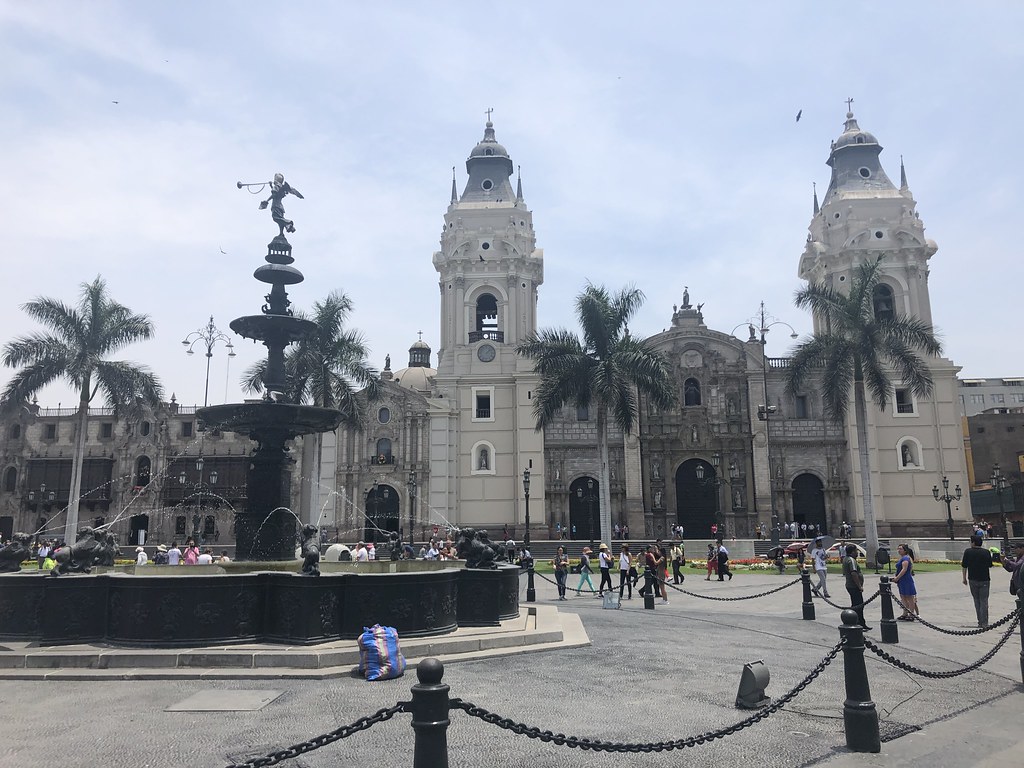 Next, we came into the Plaza de Mayor, the birthplace of Lima. It is huge and absolutely gorgeous! On one side is the cathedral and Archbishop's Palace. The Government's Palace is at the far end. The pretty fountain in the center use to be the city's gallows! That would make for a really different Instagram! 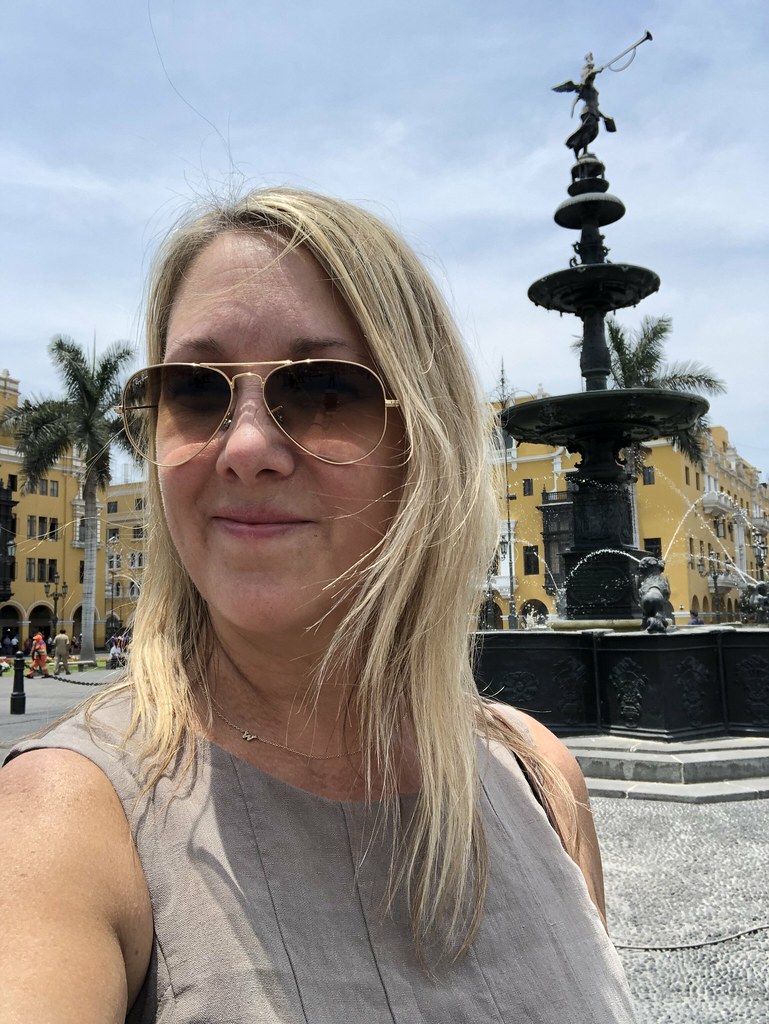 Businesses, shops, and restaurants are housed in grand yellow buildings on the other 2 sides. It's really one of the most beautiful squares I've seen! 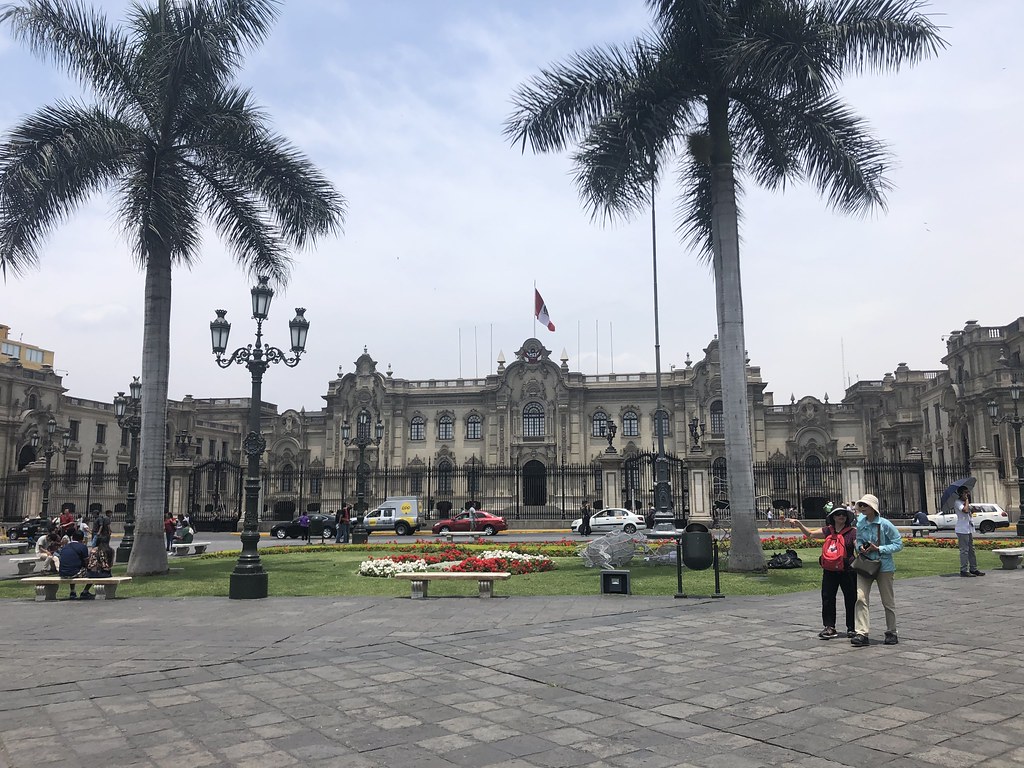 It was also very hot! So after splitting up for a bit to explore the square on our own, we met back up at the Museo del Pisco bar for, you guessed it, a pisco sour! It's a cute little bar, just steps from the square, which made it a great spot for a sit down. 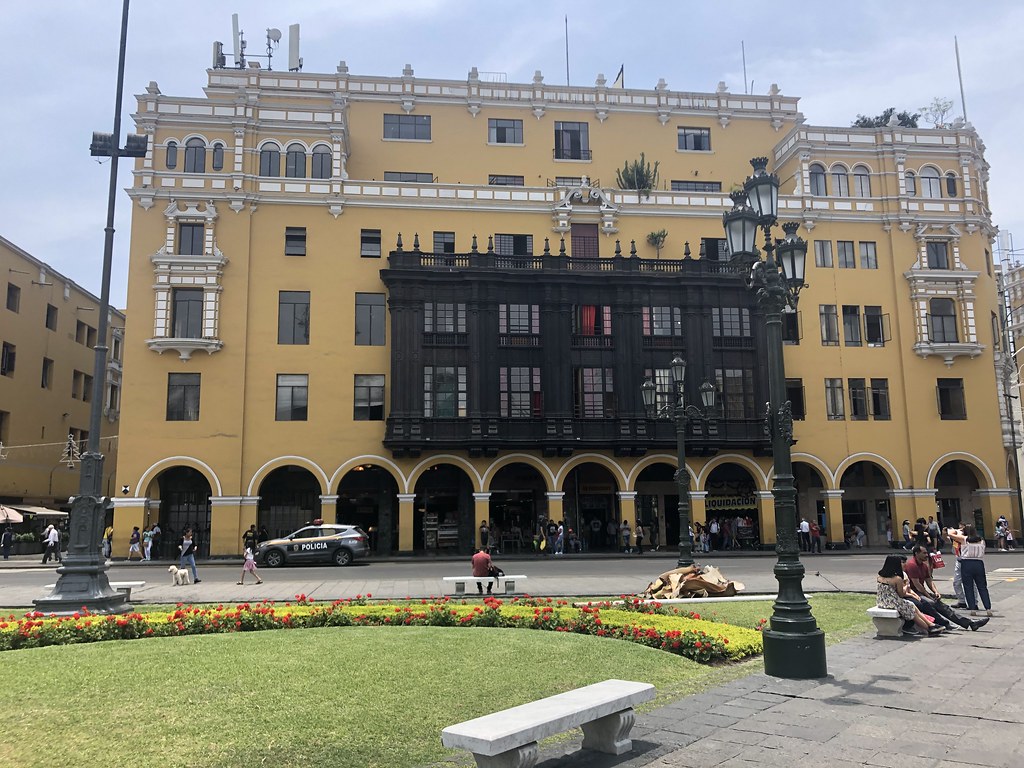 For our last lunch in Peru we decided to try some traditional roast chicken, Pollo a la Brasa. There are many, many "fast food" style places selling this most popular dish in Peru. We chose to go to Pardo's which was close to us and was a restaurant with outside seating. Their chicken gets marinaded in a tangy bath with 10-15 different spices and then is spit roasted. The skin is very crispy and the chicken is very juicy. What's not to love? 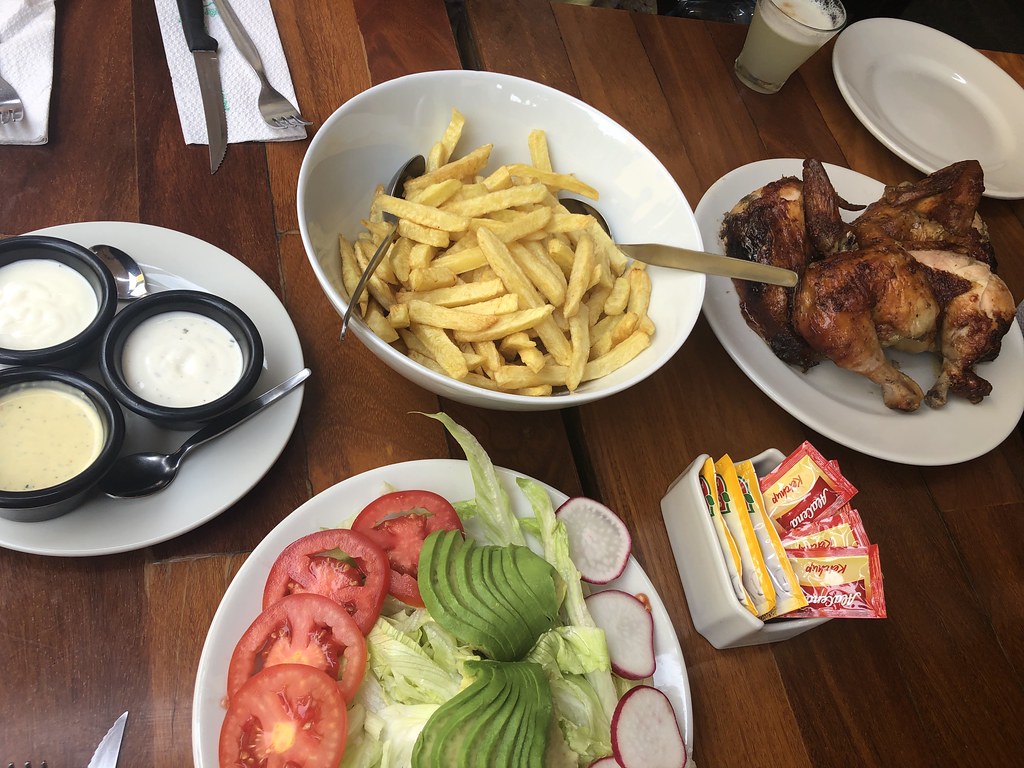 Then we headed back to the Museo del Pisco as we had learned while having a drink there that they do pisco tastings. It was very fun and interesting to have the bartender take us through the history of pisco, the distillation process, and taste through a few different styles. 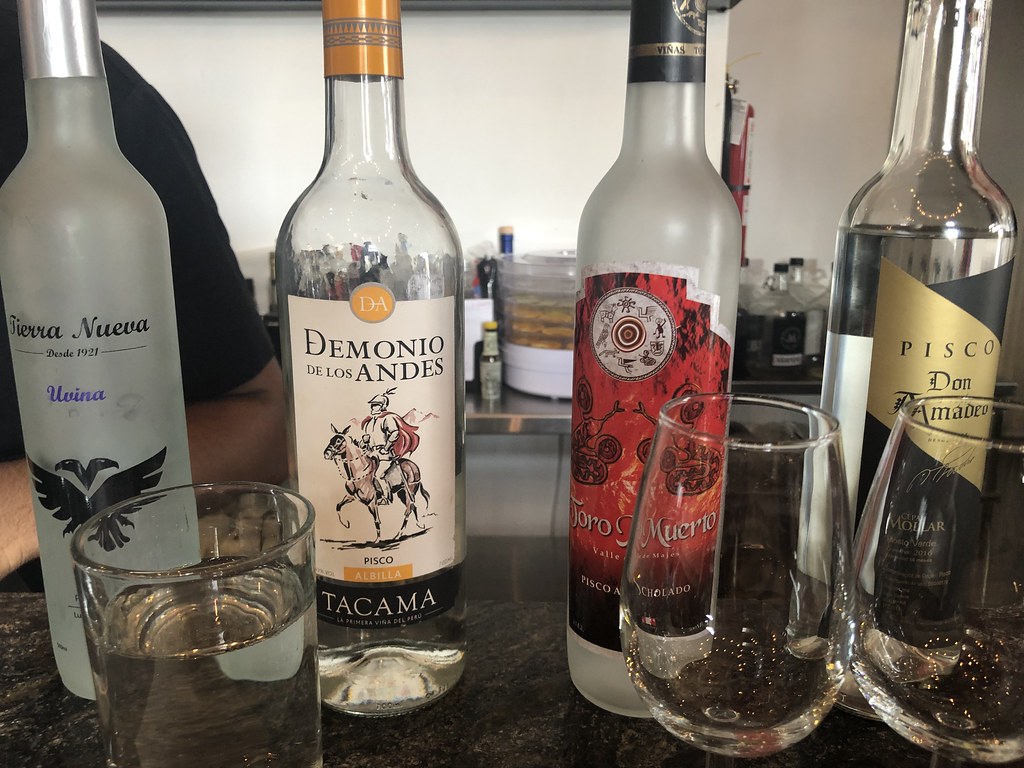 We headed back to our neighborhood to do a bit of shopping before hitting the pool at our hotel for a refreshing dip.

My flight wasn't until 1am so I had one last dinner, unfortunately it was a Monday and many restaurants were closed. We opted to go back to Kennedy park and ended up at a cafe next to where we had been before. I had one last meal of cuy and we also tried the skewers of beef heart which are popular in Peru. There was also a stand in the park selling the picarones, fried donuts made of sweet potato, so we got to try those too! 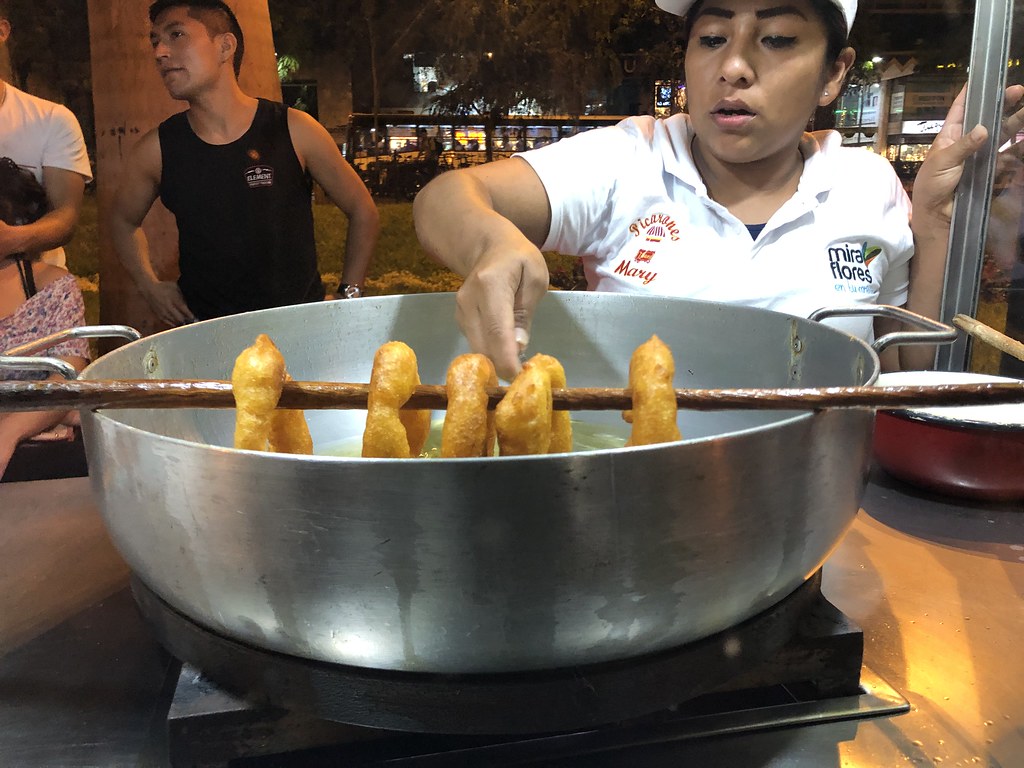 I had arranged a driver to take me to the airport, which was strangely extremely busy at 11pm! I was on American Airlines in business class so I went to wait in the lounge but the line to get in was so long I skipped it! The cabin and seats were fine but again, as on my LATAM flight into Peru, not at the same level of business class flights as other airlines. I mainly took advantage of the lay flat bed and slept. 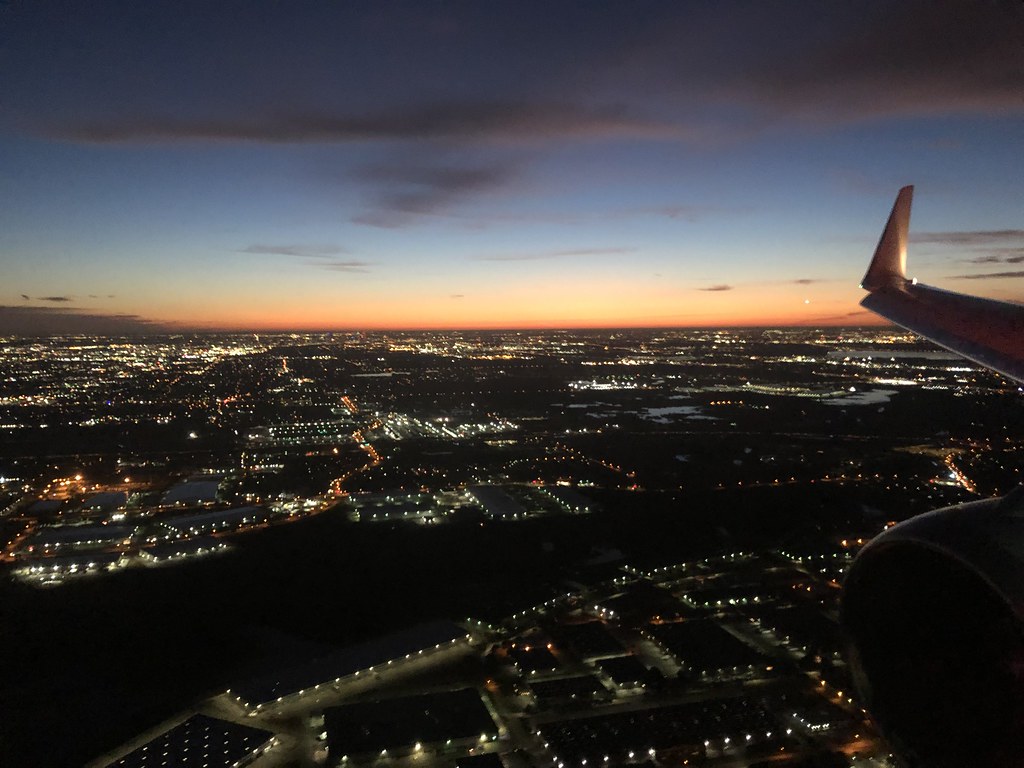 I had a 2+ hour layover in Dallas and then was in 1st class on American back up to Seattle which I had cashed some miles in for. On my way home I rode on the Alaska Way Viaduct for the last time, it would close 3 days later and be torn down! Crazy! 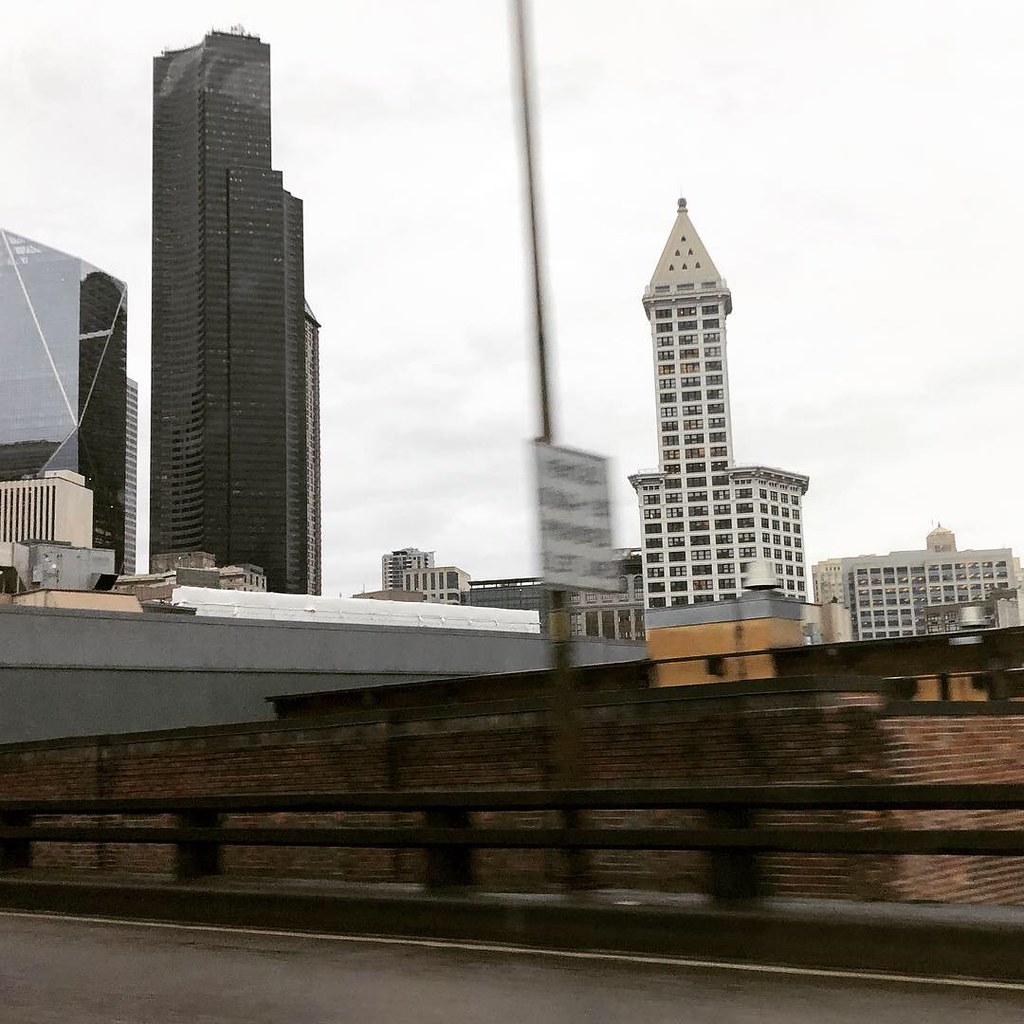 Getting to see so many sides of Peru, from the big city of Lima, to the remote & dangerous Amazon jungle, to the ancient wonders of the Sacred Valley, was an amazing way to learn more about this country. And a great bucket list experience!

Other posts from this trip:
24 Hours Miami
Lima City of Kings
Welcome to the Jungle
Piranhas and Pink Dolphins
Ringing in 2019 in the Amazon
The Sacred Valley of the Incas
Discovering Machu Picchu
Dining at 11700 Feet
Cusco Daytrip