Oban & the Isle of Mull

The drive from Skye to Oban took me back along the A87 to Invergarry and then south on the A82 to Spean Bridge, part of the same route I had taken on my drive from Pitlochry to Skye. Normally I dislike taking a repeat route but the scenery on this road is so fantastic I was actually looking forward to it! I promised myself that since I had a 4 1/2 hr drive ahead of me, and that I'd seen part of this before, I wouldn't stop until I was on unchartered territory. 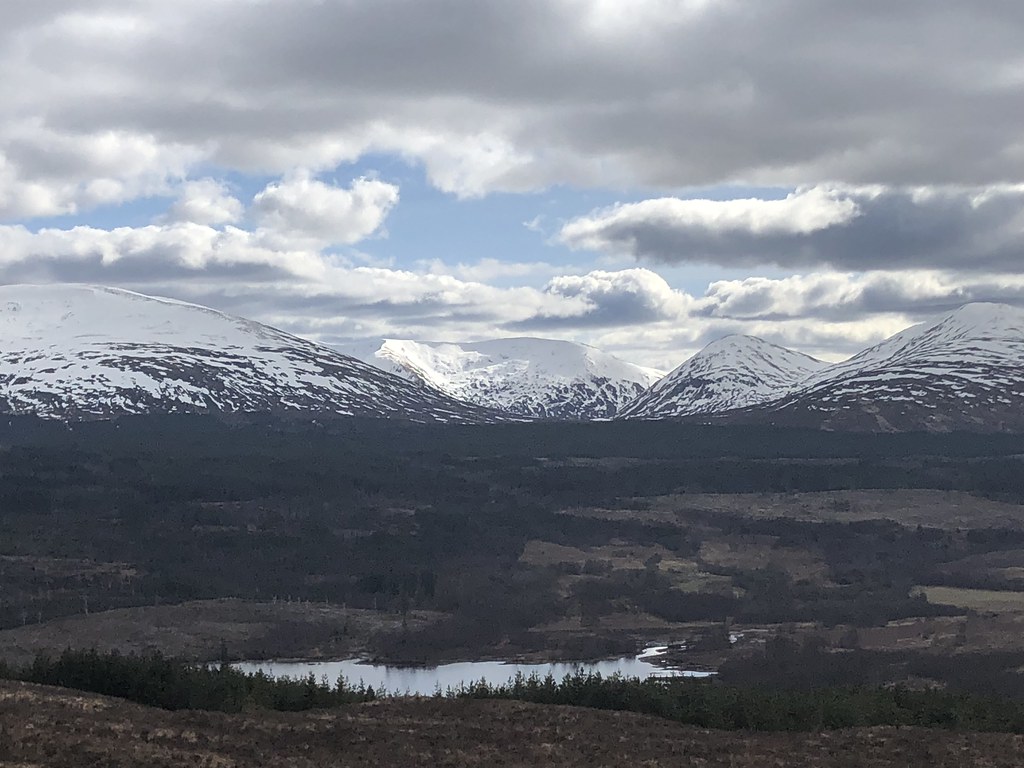 I almost made it! I had to stop to take in these mountains! They were so spectacular, photos really don't do it justice. But then I was good and just snapped a few moving shots while driving past Loch Lochy until I got to the Commando Memorial. 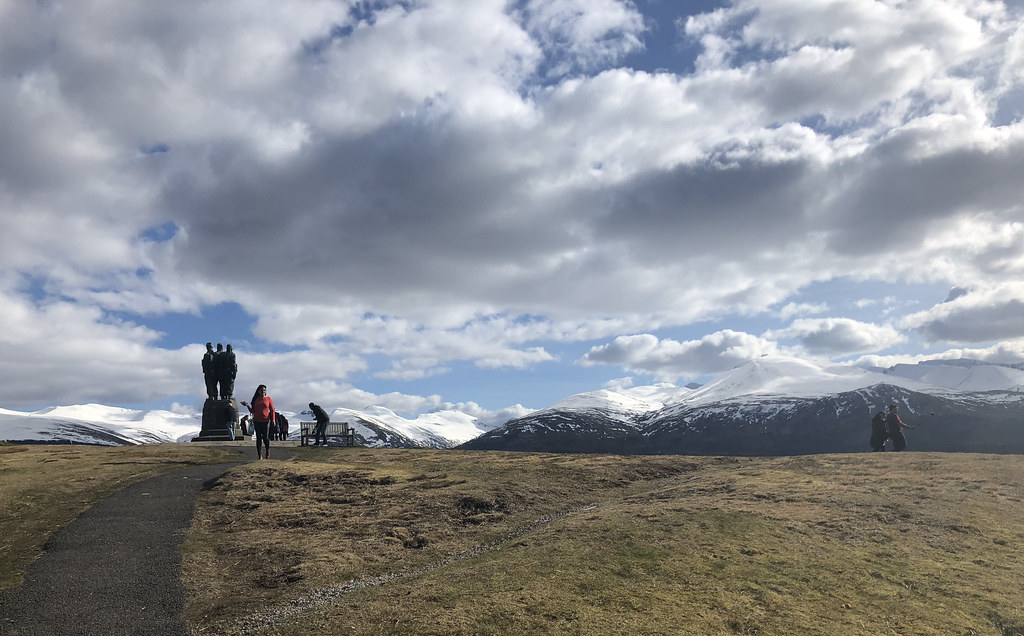 This is a beautiful memorial park with more amazing views of the mountains including Ben Nevis (highest peak in Scotland). And as I was 2 1/2 hours into my drive, it was the perfect spot to stretch my legs.

I pulled into Oban and found the Kilchrenan House, a waterfront Victorian mansion turned into a bed & breakfast, where I'd be staying for the next two nights. The b&b has free parking, very nice hosts - Colin and Francis- and gorgeous views of the bay (they also have some great itinerary ideas on their site). I was shown to my room and welcomed with a wee dram of whisky. 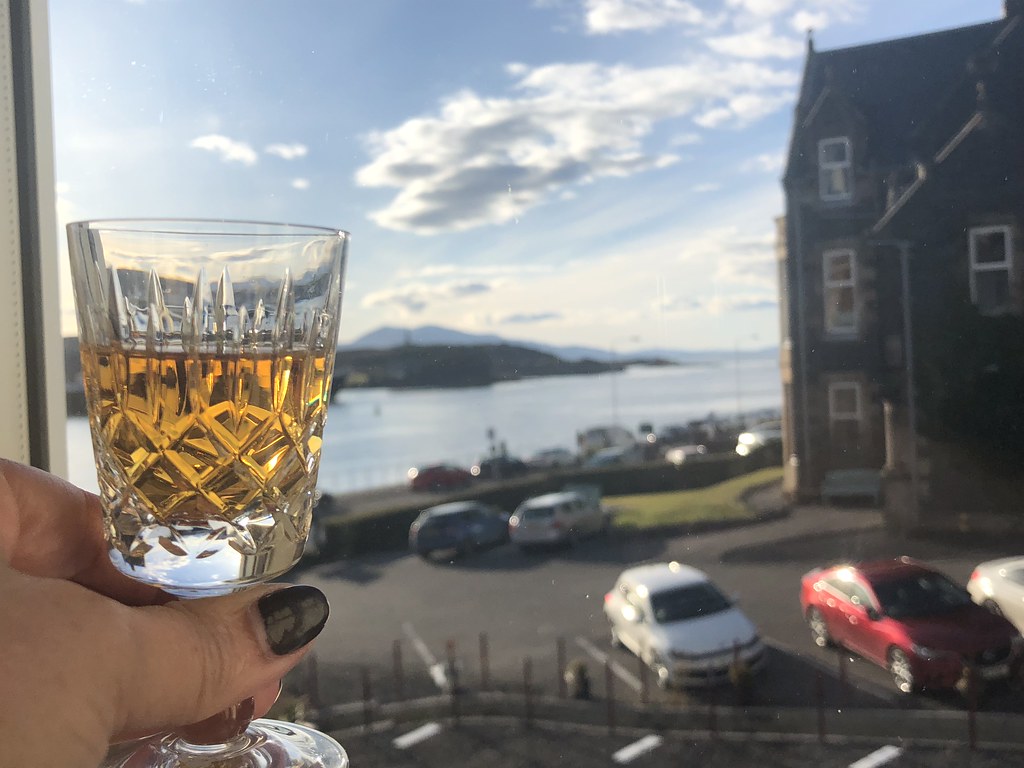 I took advantage of the gorgeous weather and went for a nice long walk before dinner. Just north of the house I walked to the park that has a nice little war memorial and also the remains of Dunollie Castle (home of the MacDougall clan). I'm telling you, this country is crazy for castles! 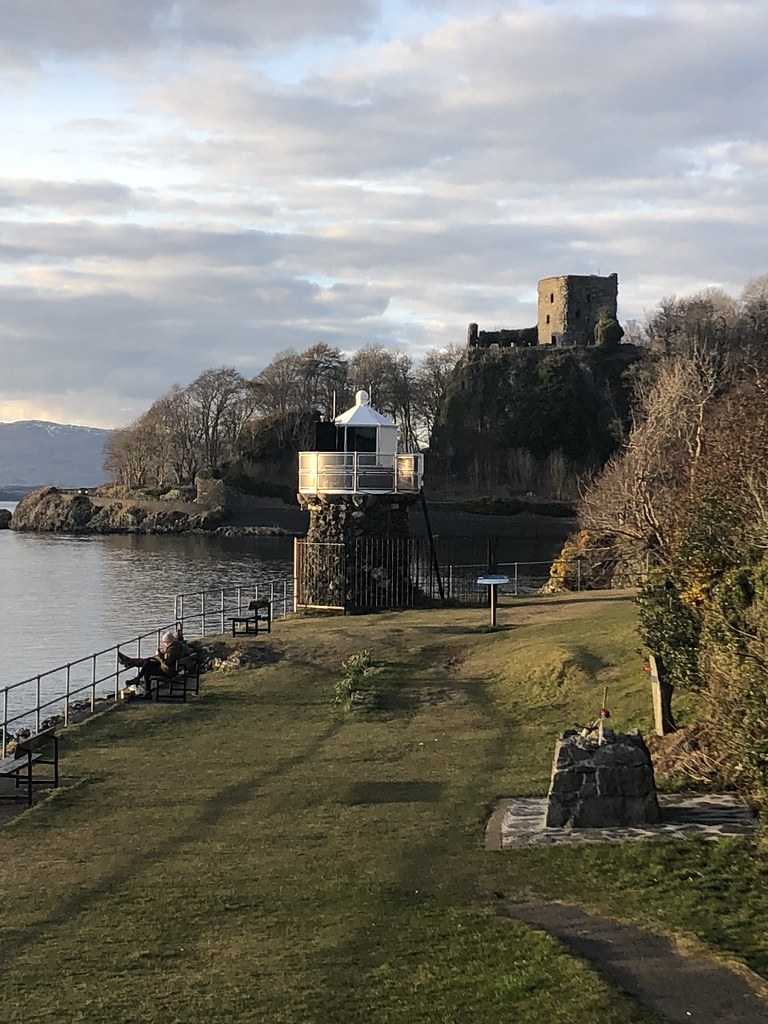 From here it was about a 1 1/2 mile walk to the center of the town and around the harbor. I found a spot for a martini and caught the most gorgeous sunset. Hello Oban! 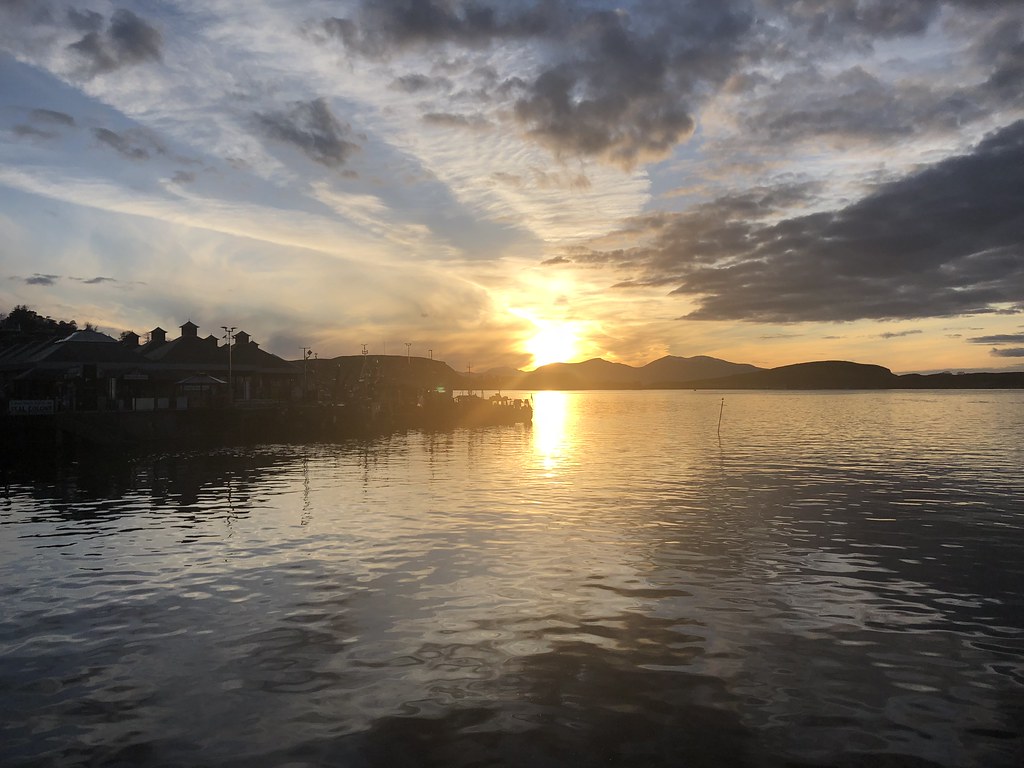 I had dinner that night at Cuan Mor which made a half way decent martini, some nice little fried haggis balls in gravy, and some really tasty mussels.

My plan for the next day was to tour the three Inner Hebrides Islands of Mull, Iona, and Staffa with West Coast Tours.  I had booked this months in advance and honestly it was my whole reason for being in Oban. But shortly upon arriving in town I had an email from the tour company saying that the weather was too windy and the trip was cancelled. I couldn't believe it as the weather that night was gorgeous and that morning I woke up to another beautiful day! I was bummed to say the least.

So I went down for breakfast and had the traditional porridge with both cream and whisky (that's a thing in Scotland and it is awesome!), along with some fried eggs and bacon, and came up with an alternate plan. 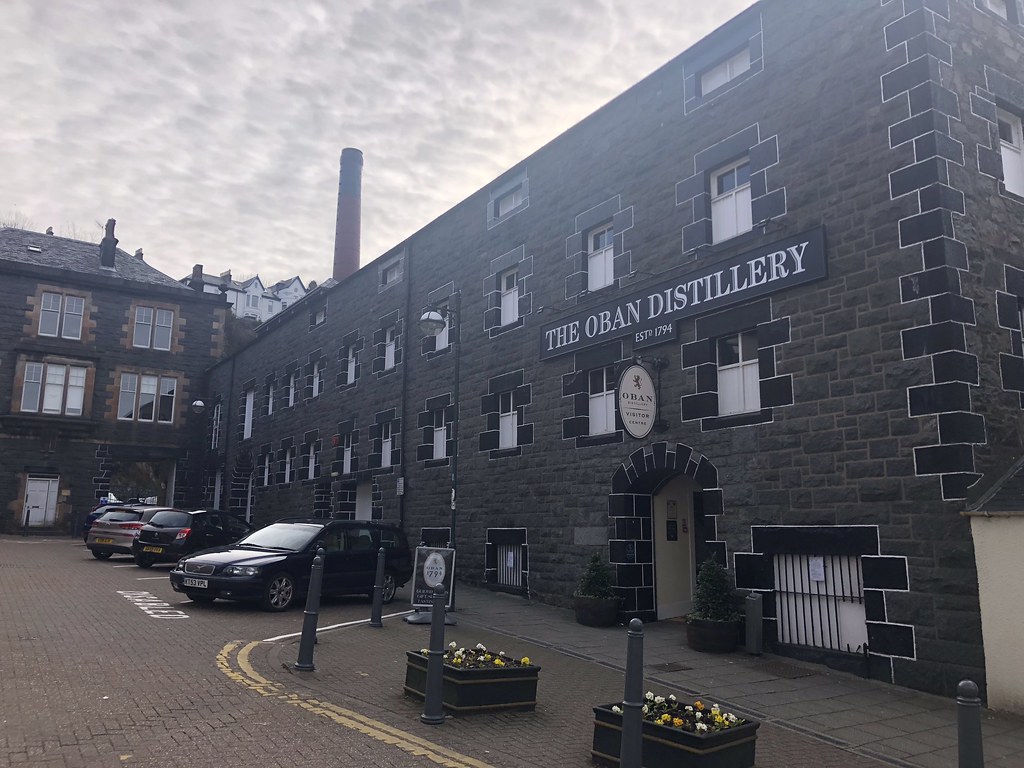 I walked down to the Tourism Office and they confirmed the ferry time to the Island of Mull as well as the connecting shuttle to Duart Castle. Then I made my way to the Oban Distillery, which is right in the center of town, and got a spot on their morning tour.

This is one of the oldest distilleries in Scotland, now owned by Diageo so again no photos inside, but really interesting and just like at Talisker, I had a fantastic tour guide. My day was picking up! 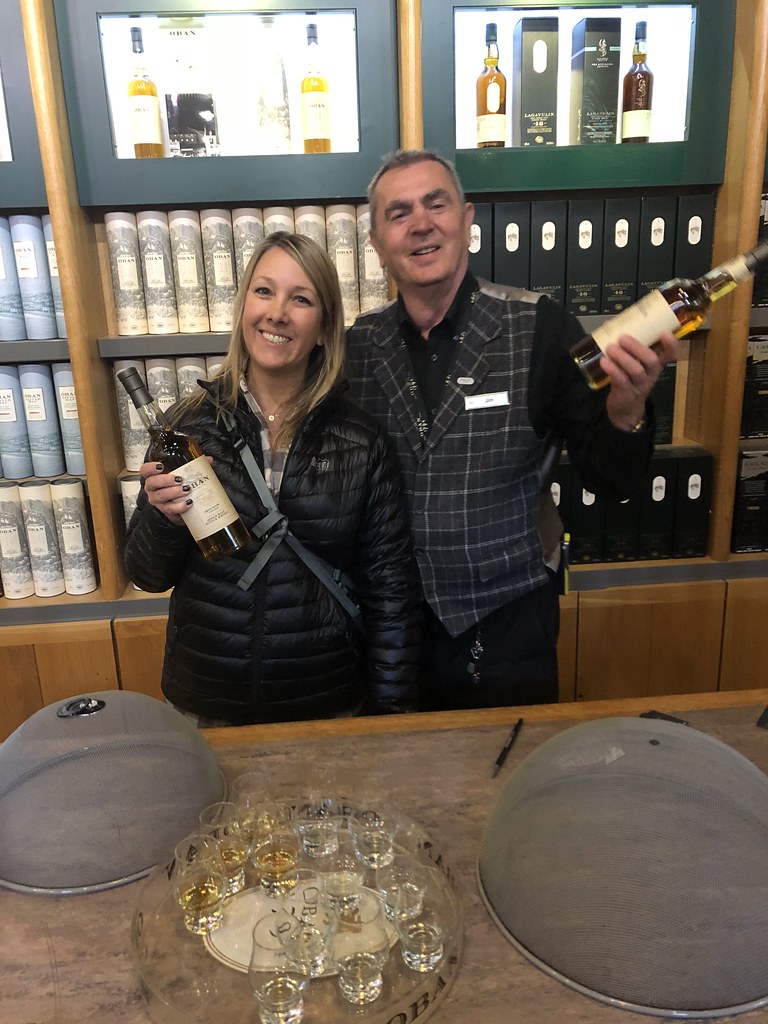 On the pier by the ferry I passed a seafood shack that seemed very busy selling whole crab and lobster, freshly steamed mussels right out of the pot, and a selection of nice looking sandwiches. I grabbed a lovely smoked salmon sandwich for the ferry ride. Never saw a name, just the green awning, but I would highly suggest eating there or grabbing something to go! Cash only. 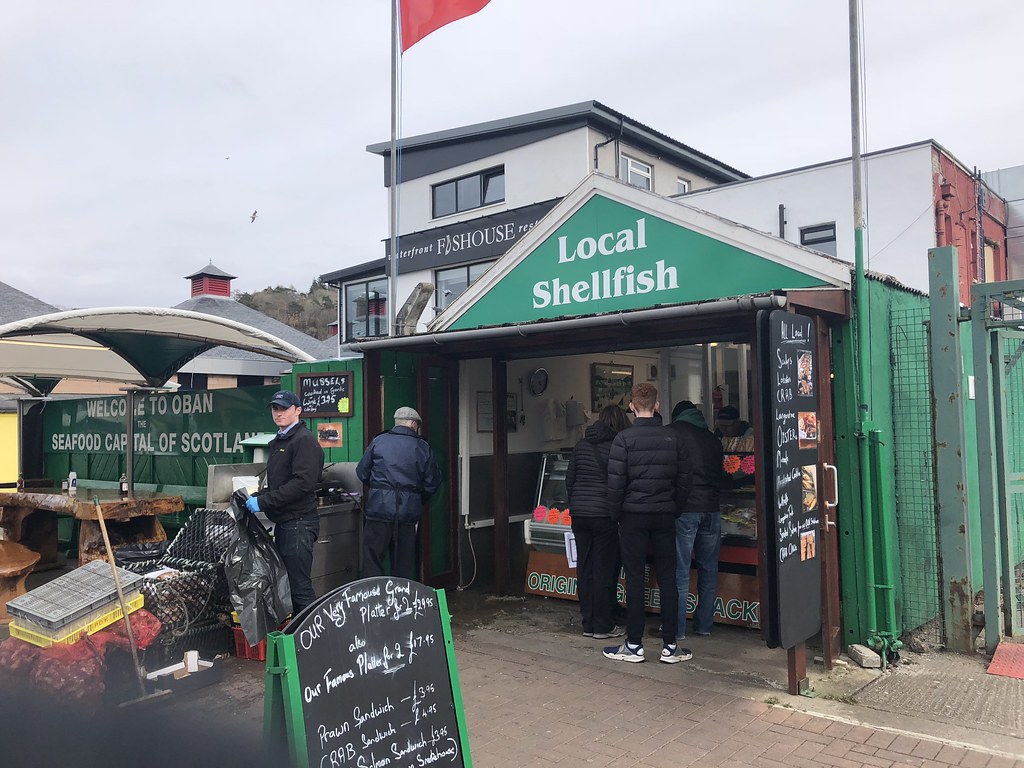 Then I went to the ticket desk and got round trip tickets for the ferry to Mull, bus transfers and entry to the castle all for about $20. Mull is the 2nd largest of the Inner Hebrides islands (after Skye) with about 3,000 residents and normal ferry runs to the main port of Craignure. The islands of Iona and Staffa are much smaller (Iona only has about 150 residents!) and because there isn't anything between them and North America, the weather can be quite bad, canceling the few ferries that travel there.

The ferry ride to Mull was fantastic! I grabbed a pint to go with my sandwich and then took a seat outside and enjoyed the scenery. I love a boat ride! 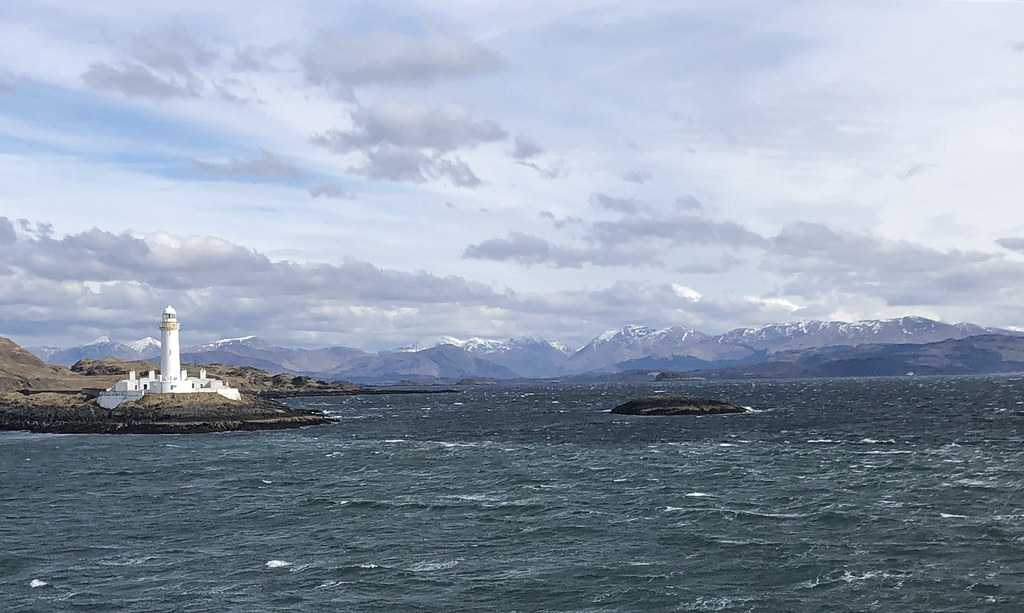 The minivan transfer was waiting when I disembarked and about 12 of us were driven to Duart Castle. It's a small but interesting fort, built in 1360 and the home of the Maclean clan. 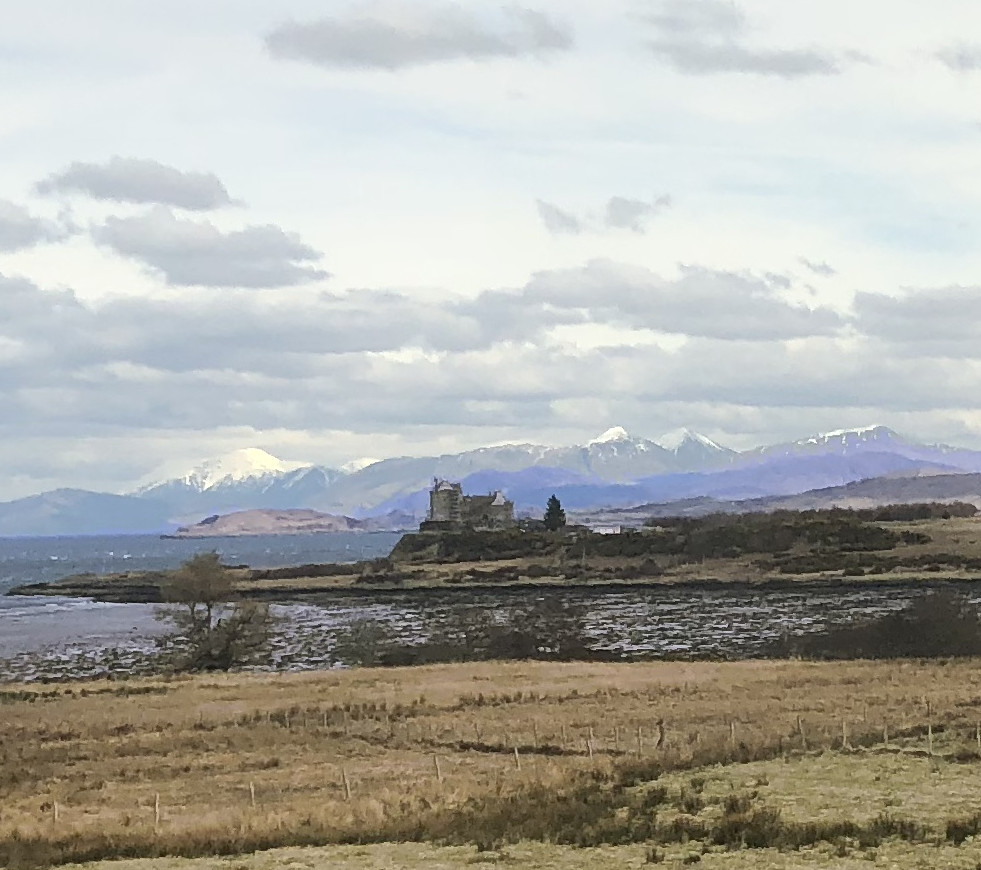 One of the guys on the bus was super excited as he is a Maclean and decided to use his day off to visit. I thought that was pretty cool! The castle has a long history of battles and seizes, but in 1911 it was bought by Sir Fitzroy Donald Maclean, the 26th Chief of the Clan Maclean. In 1990 Sir Lachlan Hector Charles Maclean of Duart and Morvern inherited it from his father. He and his family live in one section of the mansion while the other is open to tourists. 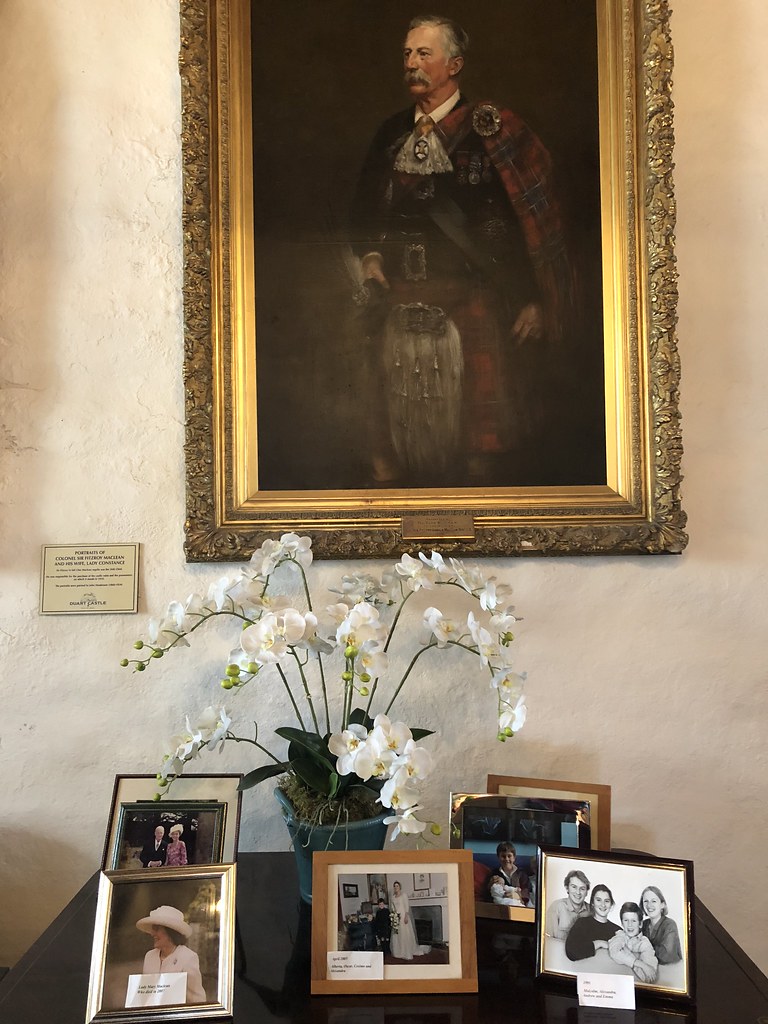 It's filled with all sorts of personal items from various Macleans, including recent family photos. It reminded me of some of the castles in the Loire Valley that also have their owners living in part while making money for repairs from tourism. It's reported that at this point $1.94Million has been spent on restoration during his ownership, some of this is from a historical grant but a lot is from ticket sales and donations. 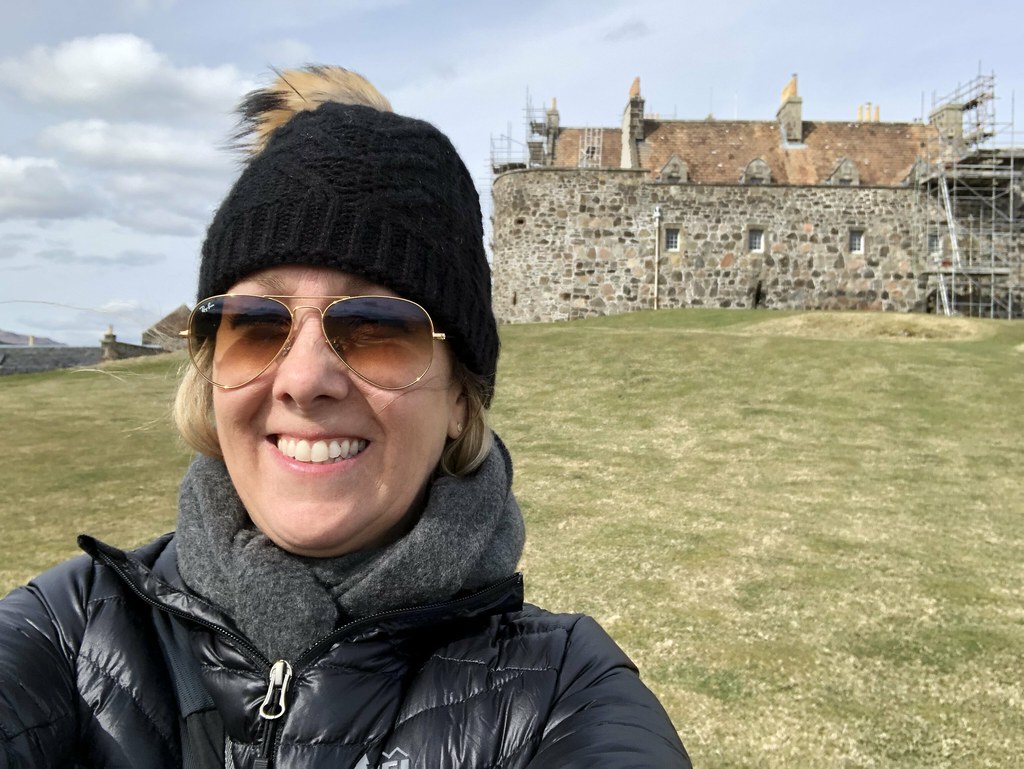 And although there were pretty blue skies, the wind was crazy strong. I felt like it might knock me down! I now understood the high wind issues with getting to Iona and Staffa.

I had a little time when I was finished touring the castle before my minivan headed back to the ferry so I stopped in the teahouse for a snack. When I saw a mention of them using local cheeses and charcuterie I asked if they had a little cheese plate I could order. They didn't but within minutes the woman put together this amazing spread for me! 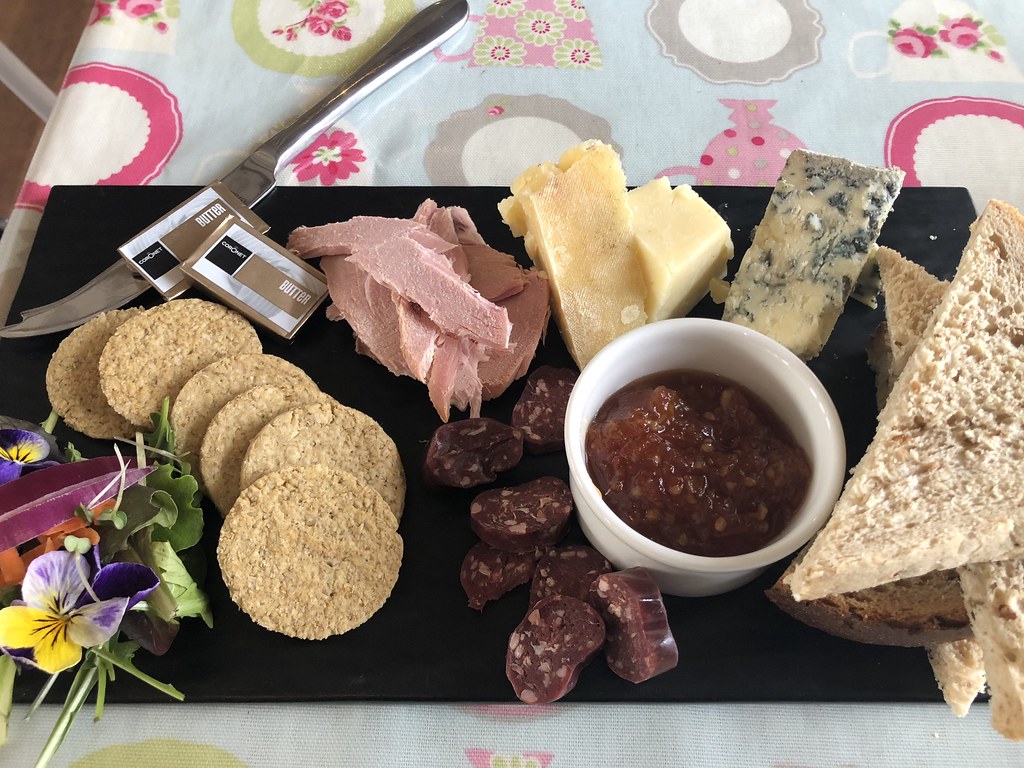 I grabbed another beer back on the ferry, and enjoyed it with another gorgeous ride as we sailed back to Oban. 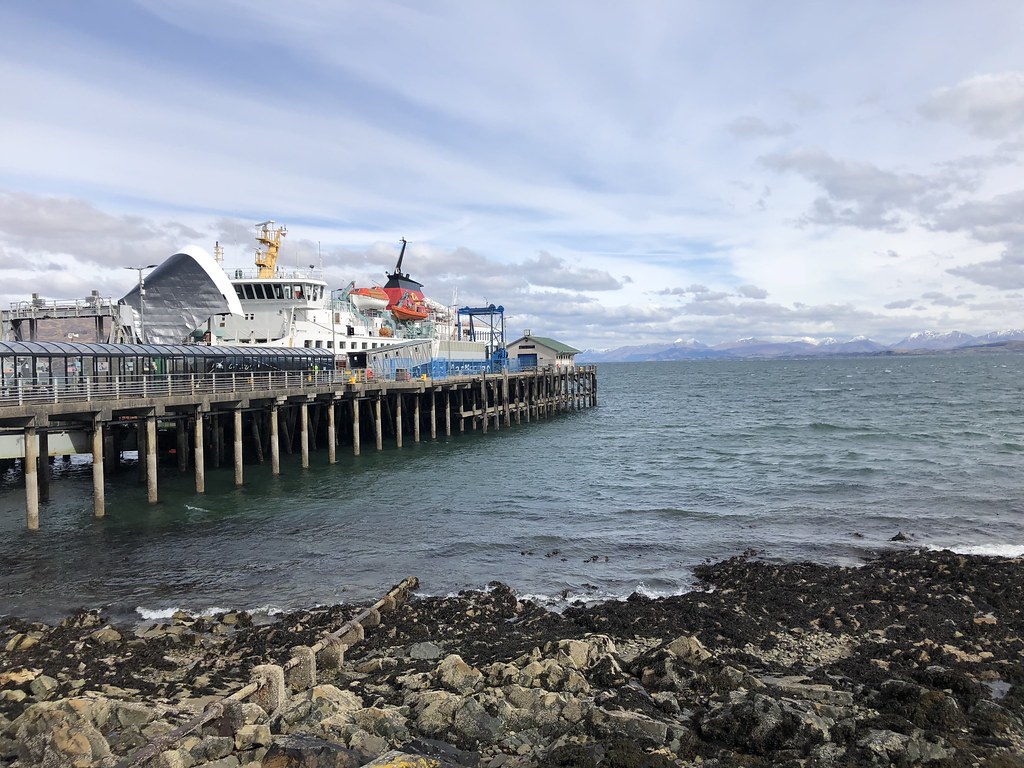 Oban is very small, the ferry port is at one extreme end while my b&b was at the other. I strolled around a bit as I made my way home, exploring a few streets I hadn't been on. It's quite a pretty town but there isn't a lot going on. 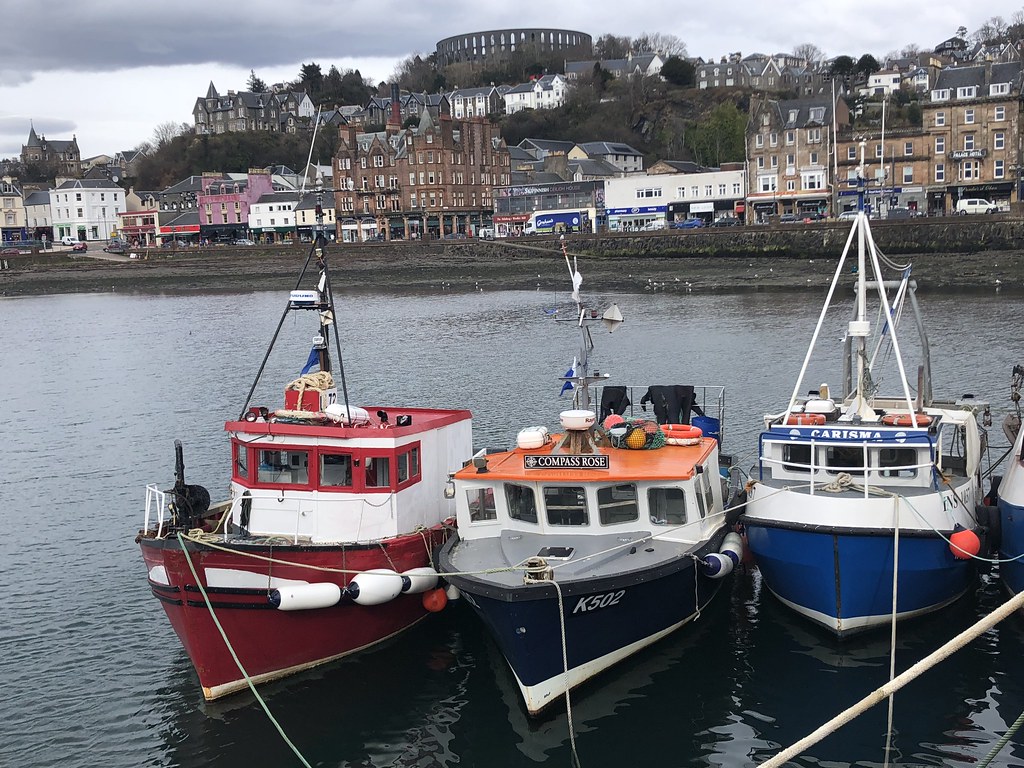 I chose George Street Fish for dinner that night as I wanted more fish and chips and the space looked very cute. And the space was cute. But unfortunately the fish was fine at best and the chips were just bad. Would not recommend. I stopped back at Cuan Mor for a couple of drinks before strolling along the waterfront home.

The next morning I had cream and whisky in my porridge again, as well as haggis and fried eggs before checking out. Even with a wrench thrown into my plans, I thoroughly enjoyed my time in Oban and Mull. And I enjoyed parking the car for a few days! 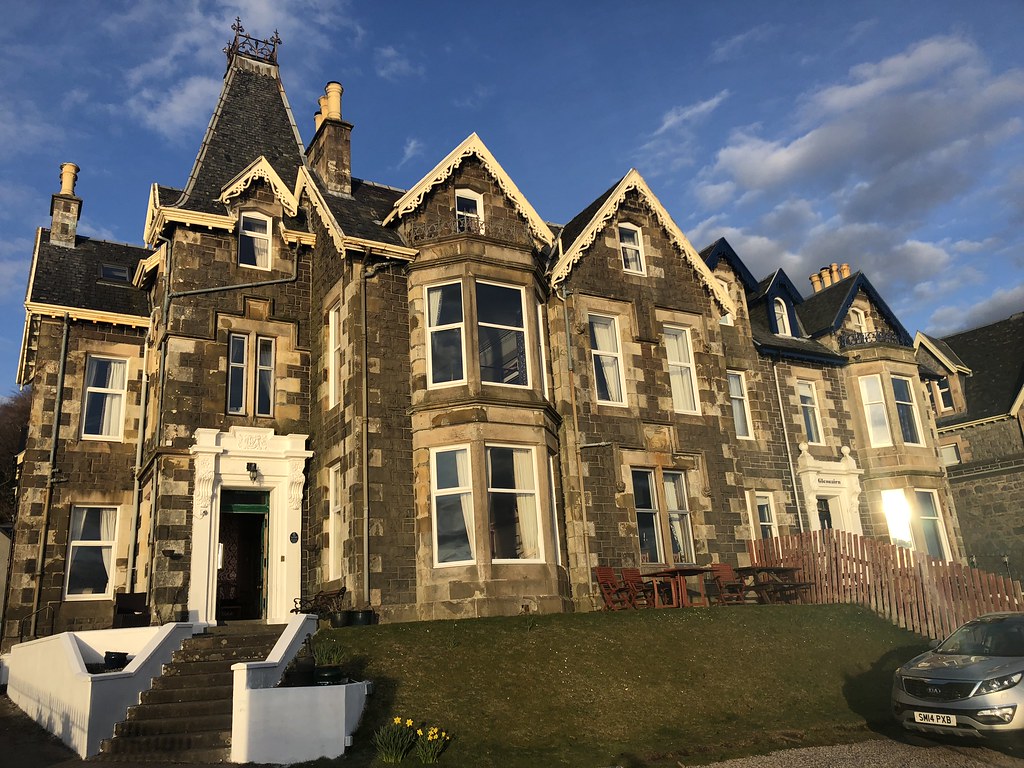 Other posts from this trip:
Hamilton & Other Hijinks in London
The English Spirit
An Introduction to Unicorns
The 45th
Big Castle, Small Distillery, Highlands
A Slice of Skye
A Wee Time in Glasgow
at June 14, 2018