The Midsummer celebration in Stockholm, Sweden is one of their most important holidays. And although I flew on the summer solstice itself, the city celebrates starting that weekend. Most of the shops, bars, and restaurants close, as the majority of locals leave town to celebrate with their families and friends on islands or in the countryside. I've traveled enough over Christmas and New Year's to know about these closures and do my research on what is open; I had my plan set! 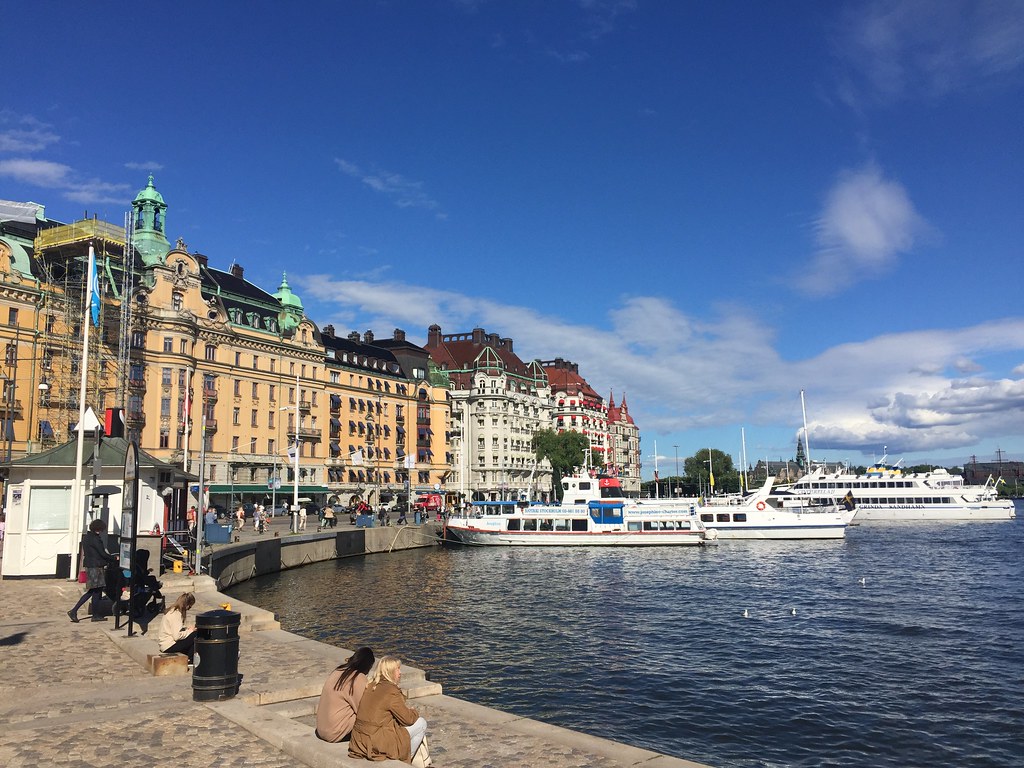 I landed in Stockholm at 6am, collected my suitcase, pulled some cash from the airport ATM, and was on the train headed into town by 6:35am! It's a 20min train ride and costs about $32, you buy your ticket on the train. Could not be easier.

This wasn't my first time to Stockholm, but my last visit was in 2005 for one night en route to St. Petersburg Russia for New Year's Eve. It was dark the entire time I was there; this visit was pretty much the opposite!

I took a flat rate taxi from the train station and checked into the Elite Eden Park Hotel, a great recommendation from friends. And they let me check in at 7am so I could take a much needed nap! 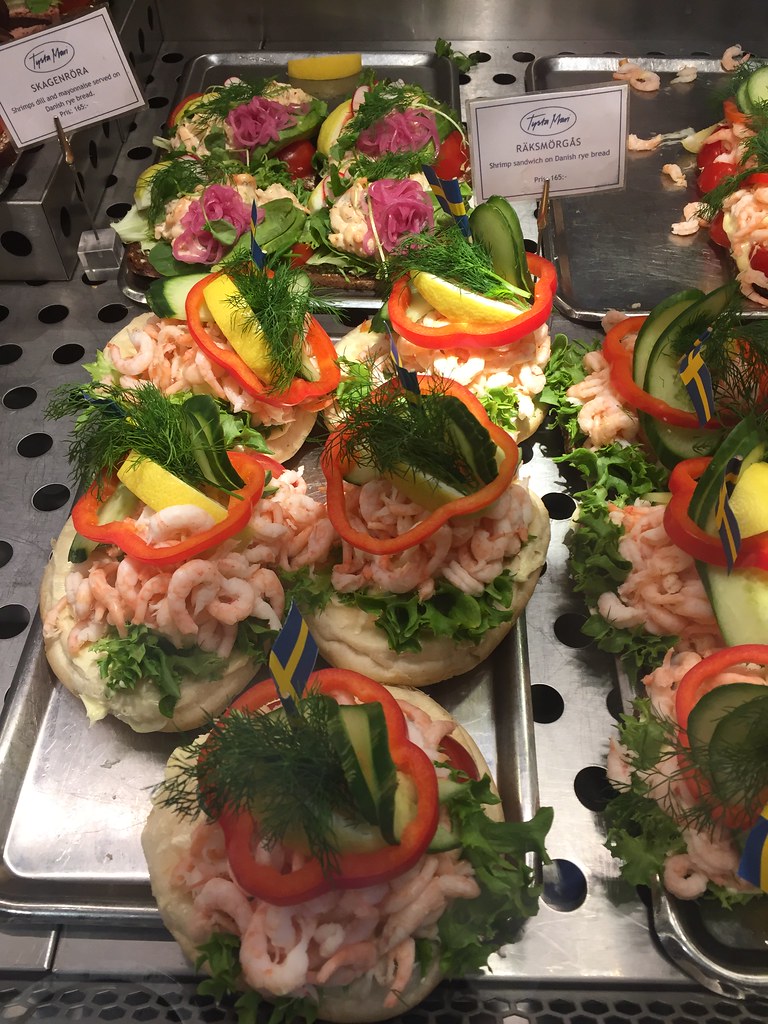 And then I was ready to start exploring! My first stop was Ostermals Saluhall, Stockholm's 120+ year old food hall and market. The original building is undergoing much needed repairs so there is a temporary set up at Östermalmstorg until sometime late in 2019.

I browsed the pretty fruit and vegetables displayed by farmers, and the delicious looking preprepared skagen (shrimp salad),  sill (herring), meats, cheeses, sauces, chocolates, etc. at the various shops. It made me all very hungry so I grabbed at seat at Lisa Elmquist and had a lovely first lunch. 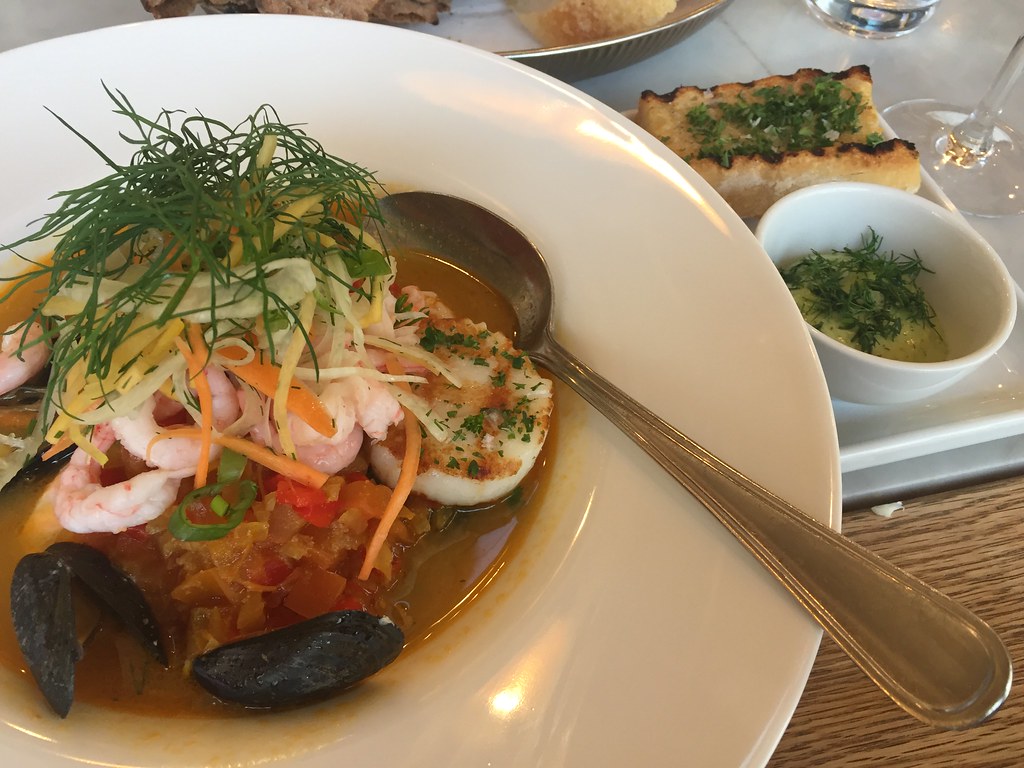 My "house" fish soup with mussels, white fish, and shrimp was fantastic. It also cost about $34! Add a glass of Sancerre to that and my lunch was over $50. Welcome to Scandinavia!

It was an stunningly beautiful day so I headed out to walk along the Strandvagen and check out the waterfront. Along the way I did a bit of shopping at Svenskt Tenn, an interior design shop with absolutely gorgeous items (that would also be closed for the rest of my trip starting the next day)! 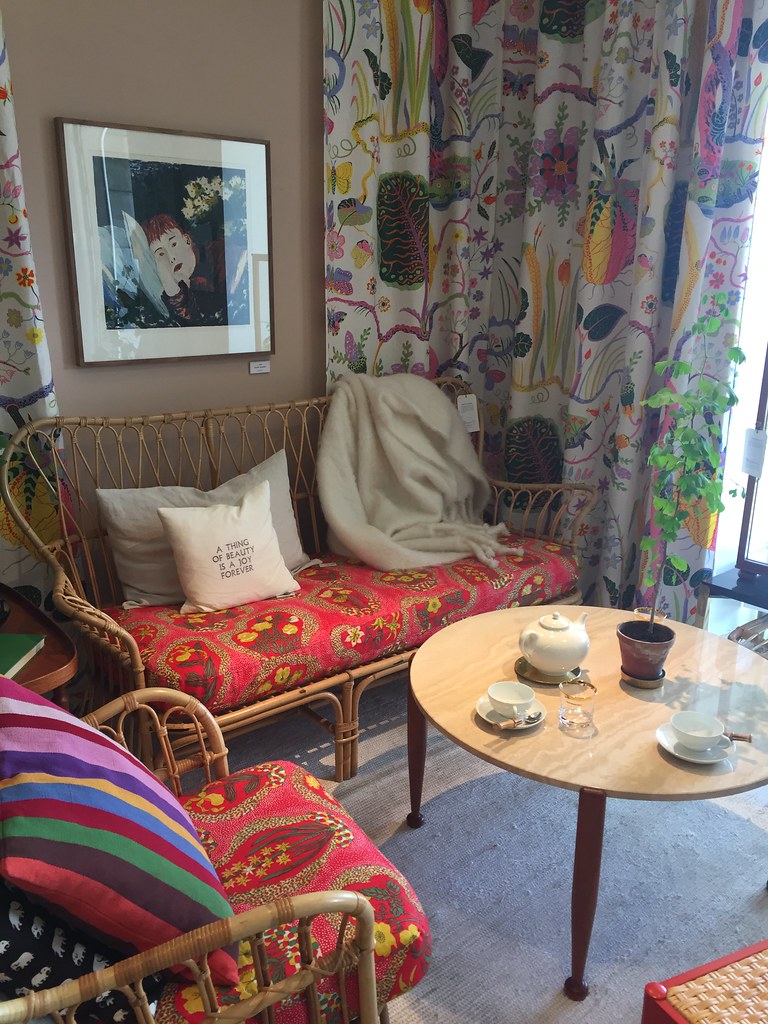 I walked all the way to Djurgarden, a small island connected by a bridge, and strolled around the beautiful park before heading back along the waterfront side of the Strandvagen and stopping for a glass of rosé. 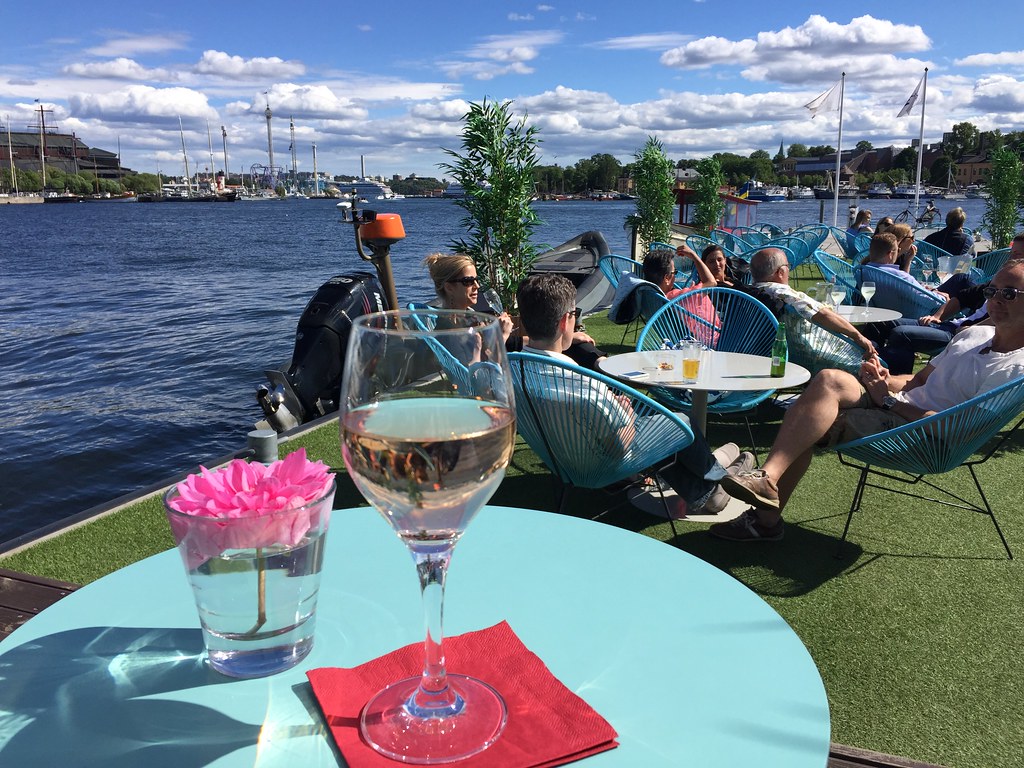 That evening I had reservations at the community table at Gastrologik, an intimate 1-star Michelin restaurant, within walking distance of my hotel.

The community table was a great experience, there were a total of 8 of us and over the ~20 small bite courses I learned that a few of them were chefs and restaurant owners visiting from different countries. 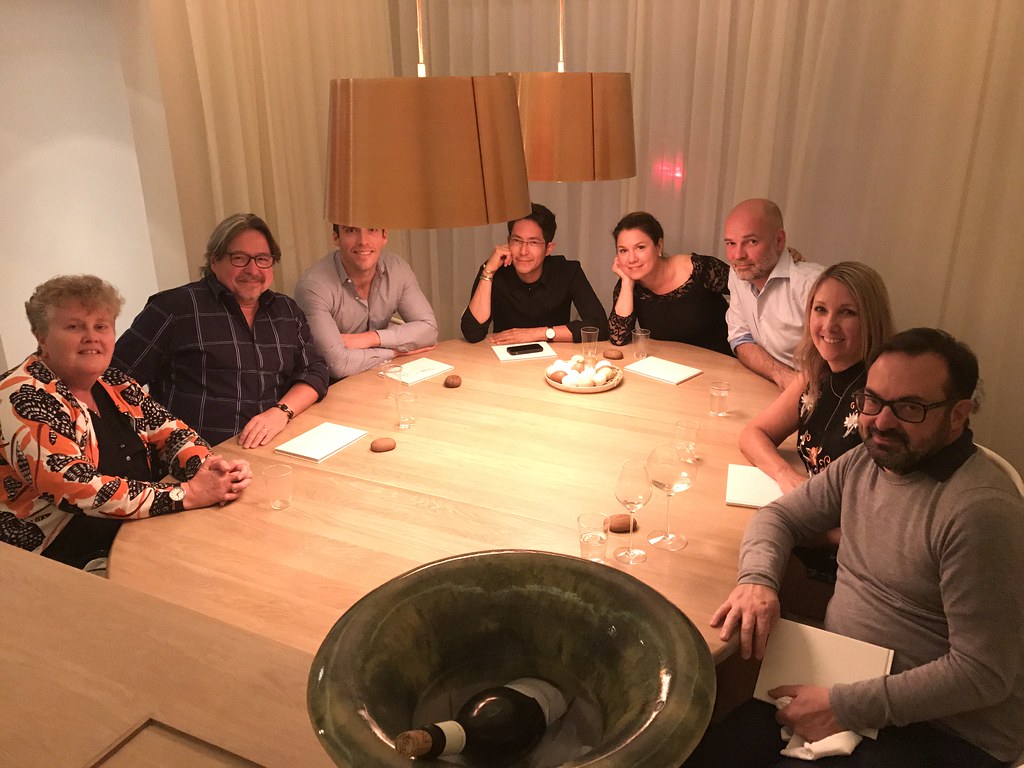 The food, wine, and service at Gastrologik were all fantastic! The dishes were each little works of art and were fun without being too gimmicky. The wines were interesting and well paired. And each of the chefs, including owners Anton Bjuhr and Jacob Holmström, were really friendly when they presented their dishes. 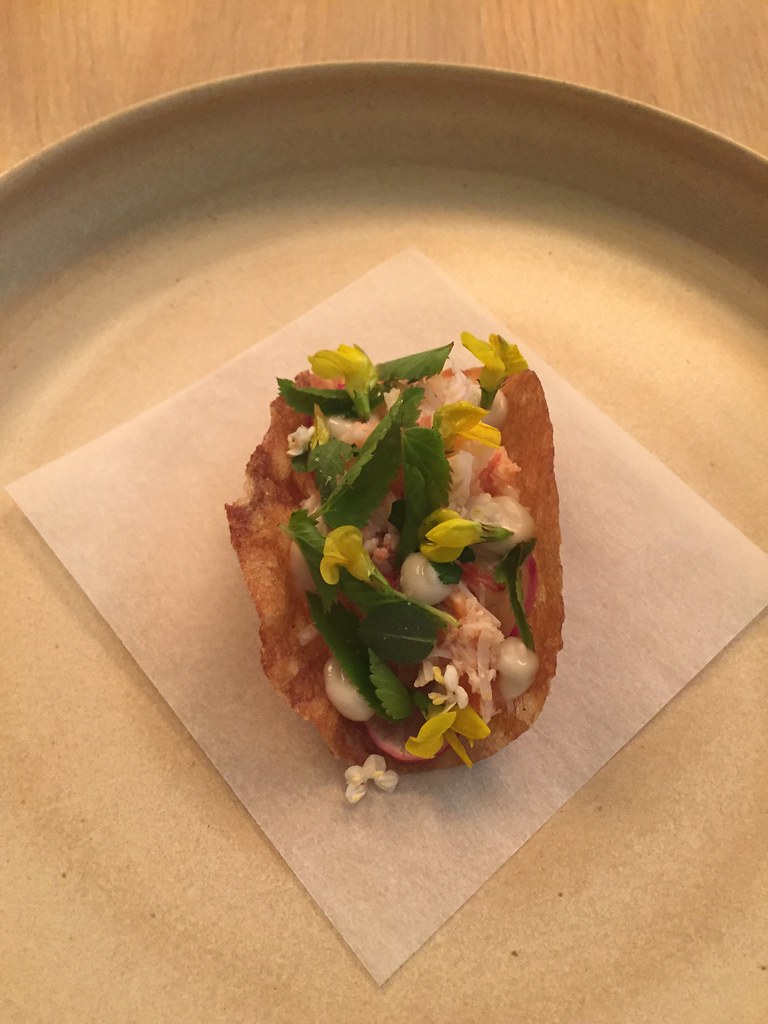 Our group was even taken into the kitchen for a tour and then one of our courses was served to us there. 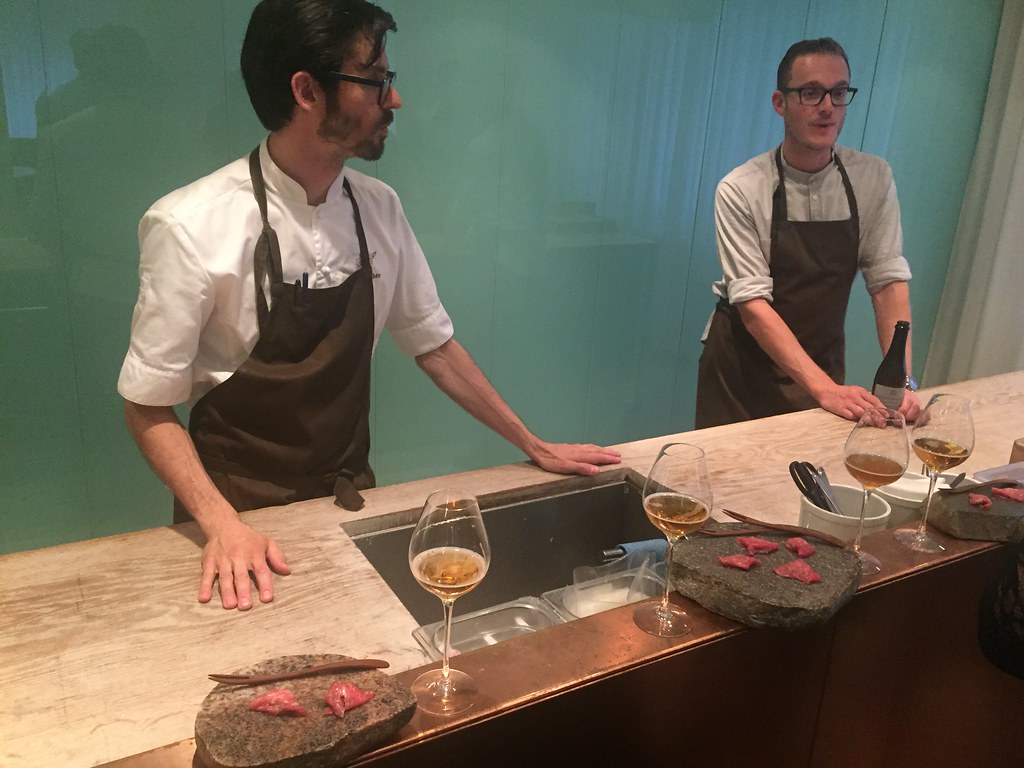 I would absolutely recommend dinner here, and I hope to go again one day!!! I walked home at 11:50pm in a still-light sky! 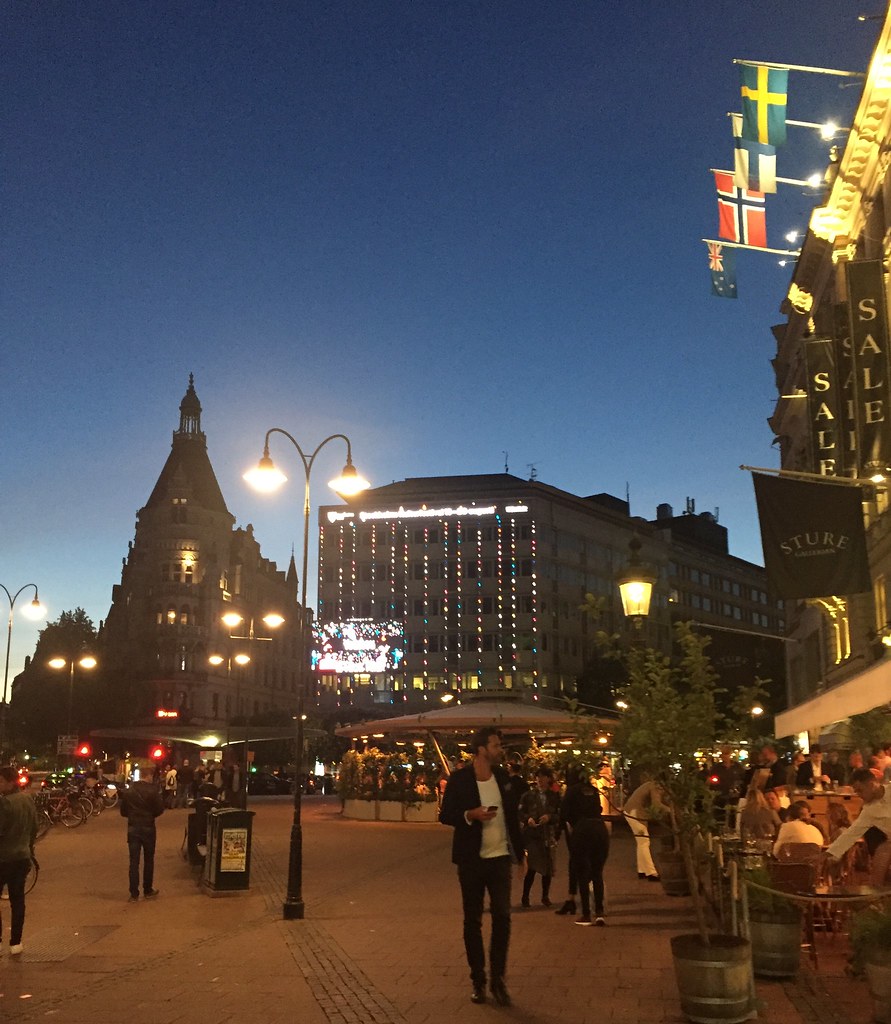 The next morning I had a tasty smorgasbord breakfast in the hotel before catching the tram along the waterfront to Skansen, a huge park and outdoor museum. The city was putting on a big Midsummer festival all weekend; kicking things off was the raising of the maypole at 2pm, which I planned to be there for. 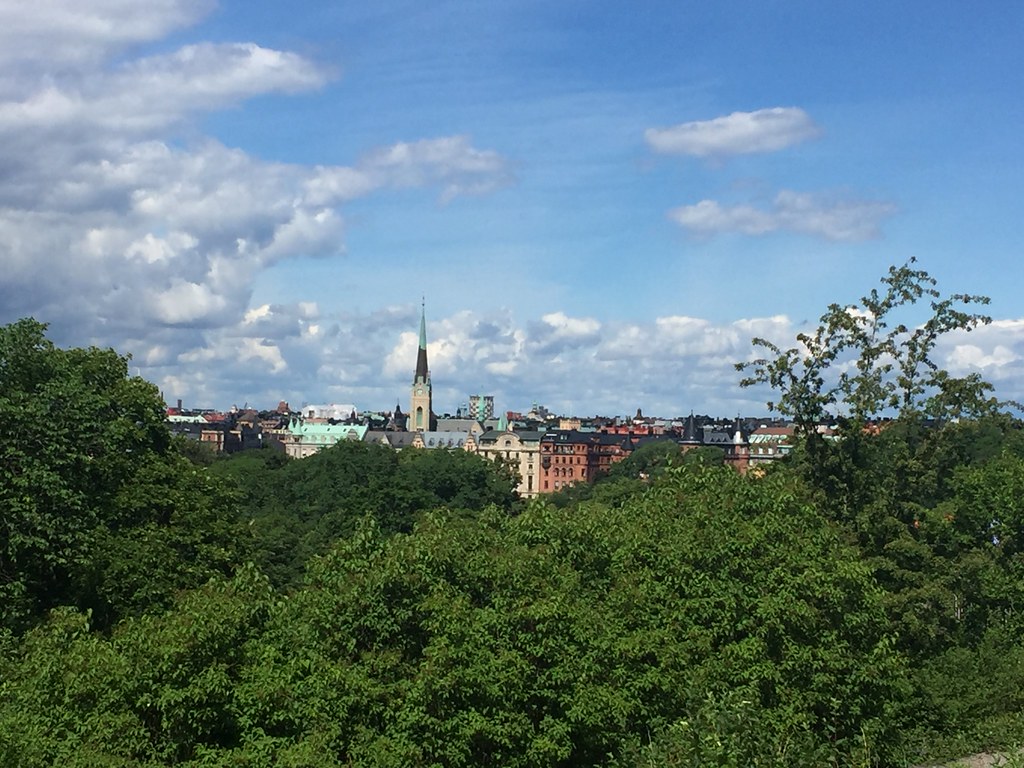 It was another incredibly sunny day in Stockholm as I walked around the park catching glimpses of the city. The outdoor museum is the oldest in the world and is made up of about 150 traditional style cottages, shops and such. It was really interesting to wander through the different village exhibits, each representing the way Swedish people from different parts of the country, lived throughout the ages. There's also a zoo, aquarium, farm areas, etc. It's really incredible! 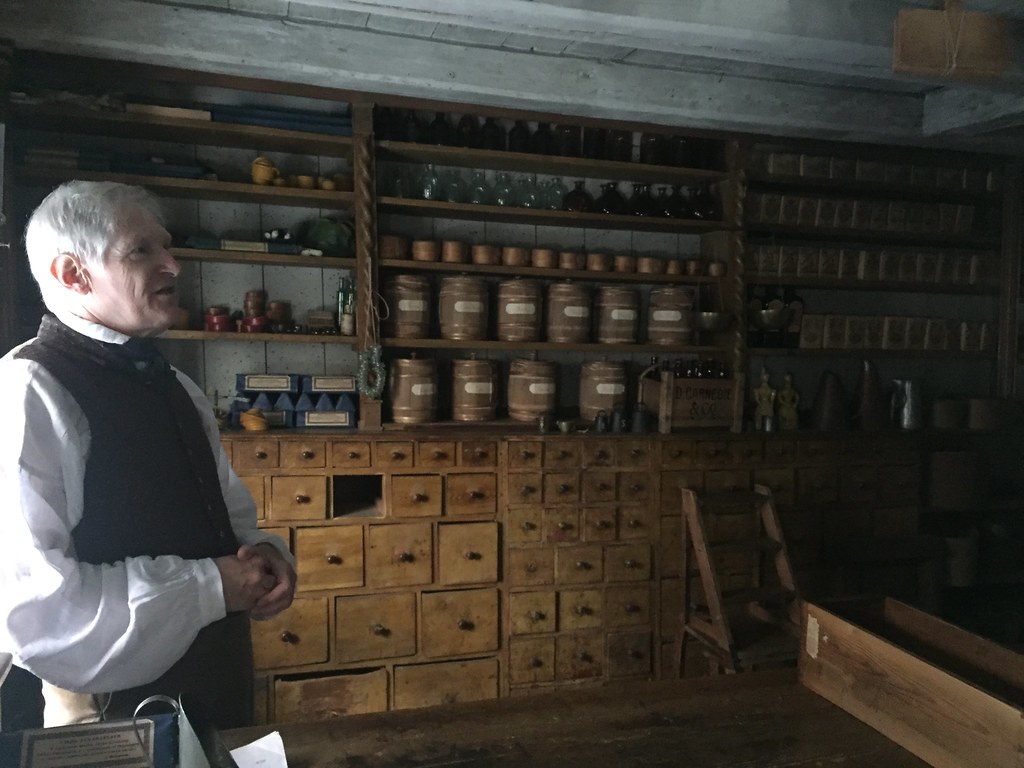 I then made my way to the central market area where artists and food stands were set up for the festivities. There were so many delicious smells but I was still stuffed from breakfast! 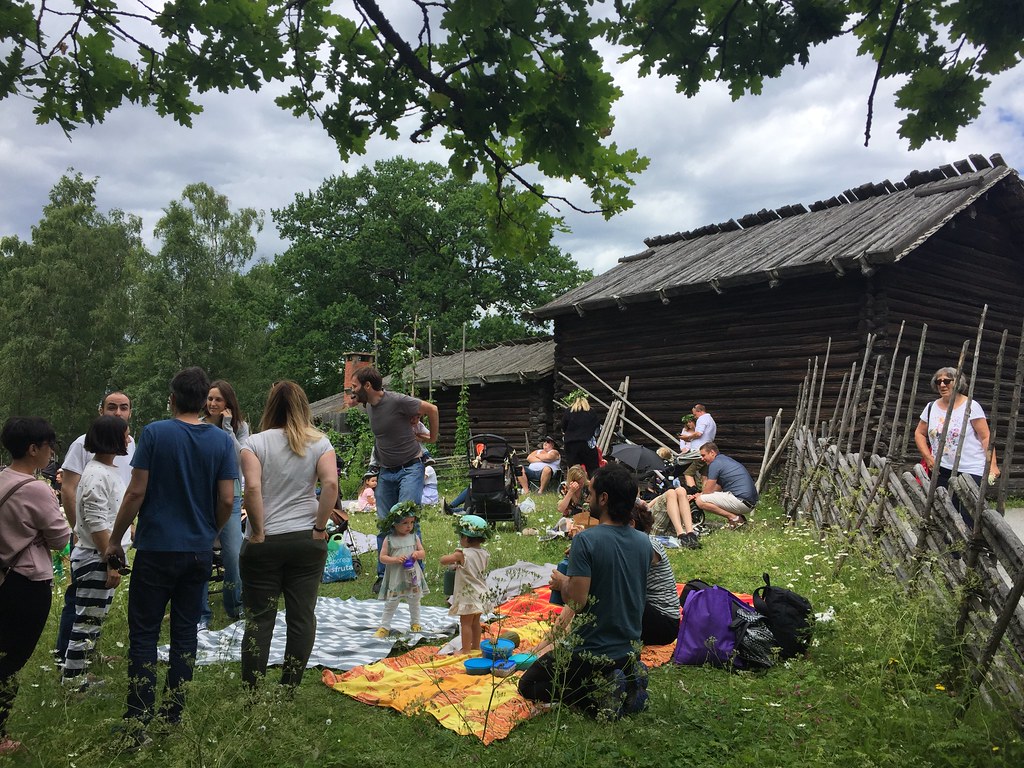 Midsummer is all about traditions and the Swedes are particularly gung-ho about it.  It's considered a magical occasion since the sun doesn't fully set. People were picnicking all over the place; picking flowers from the fields and weaving them into crowns. It was really fun to see it all as I made my way to the big meadow where the maypole would be raised. 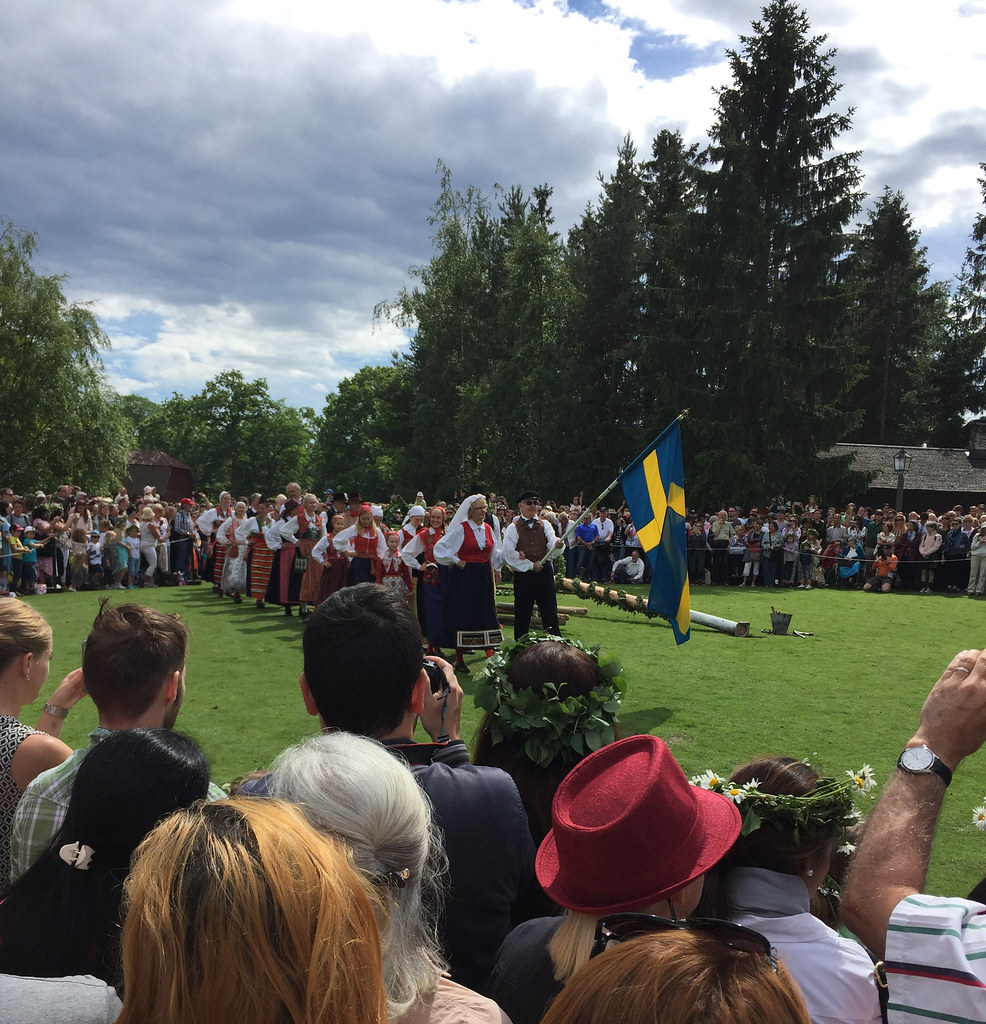 The band started playing and everyone gathered around, the official kick off of Midsummer was starting! It took the team of men a bit of time to raise the pole completely. They haul it up a bit at a time, placing wooden braces under sections, until they can finally get it all the way upright. It's quite a thing to watch and the crowd really gets into it, chanting and singing!
And then everyone dances around, arm in arm, in rotating circles. It was sooooo fun!!!!

I had more on my agenda for the day, so I continued to wander the park for a while before finally stopping at one of the restaurants for a glass of rosé and a dish of the ripest strawberries I've ever eaten. Strawberries are everywhere during summer in Sweden, bars sell them like most places dole out dishes of nuts! 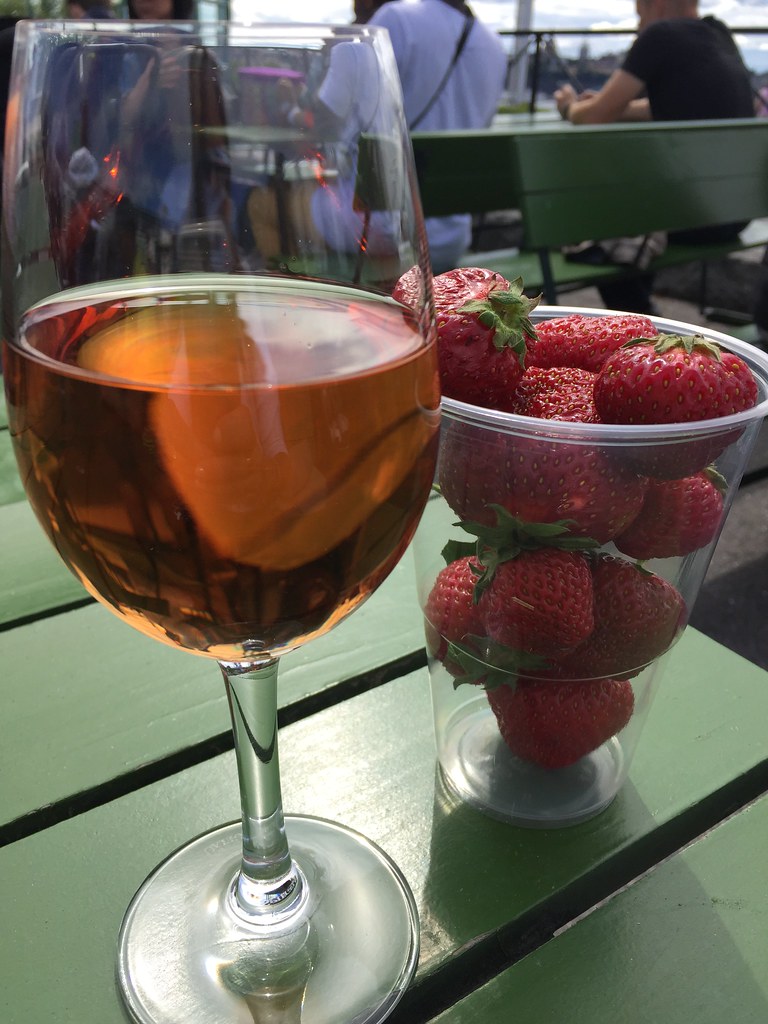 It was an easy walk out of the park and down the road to the ABBA Museum, I mean what's more Swedish than ABBA? This is a very fun, interactive museum, showcasing the pop group's music, costumes, and history. You can even get up on stage and sing with holograms of the group! 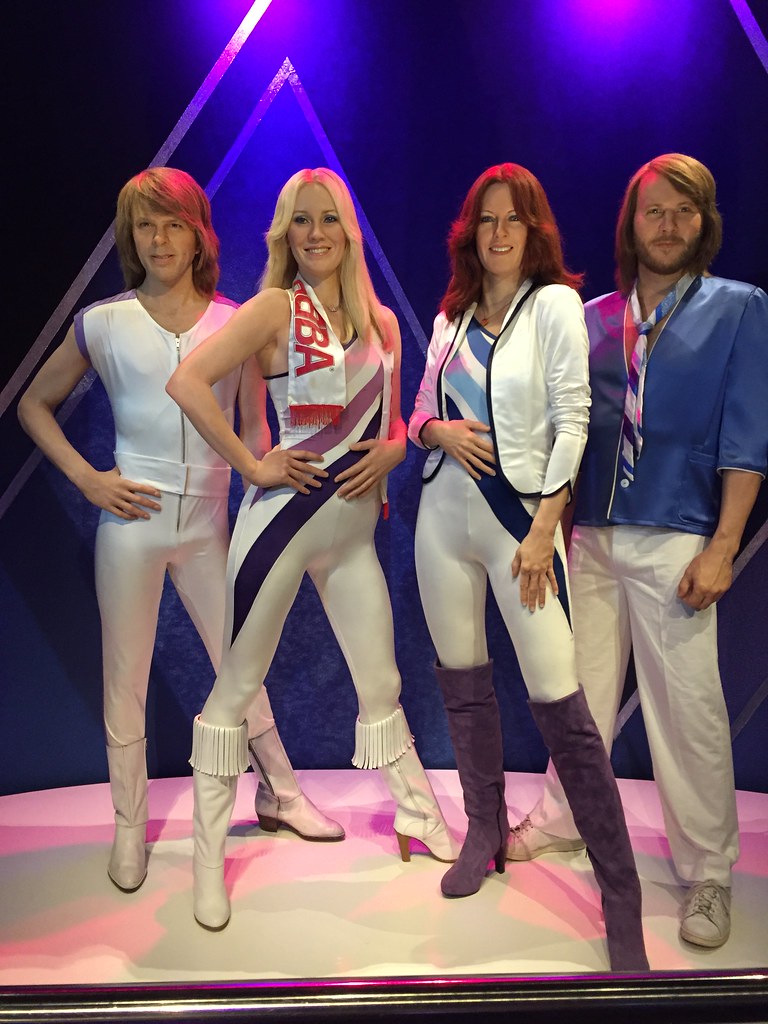 After shopping in the gift store, which sells everything you can imagine with the ABBA logo on it, I had a lovely late lunch of an open-faced shrimp salad sandwich and a glass of rosé.

That evening I continued my ode-to-Sweden by having dinner at Matbaren. Another 1-star Michelin restaurant, this one run by the Swedish restauranteur Mathias Dahlgren, is a more casual concept housed inside of the very swank Grand Hotel. 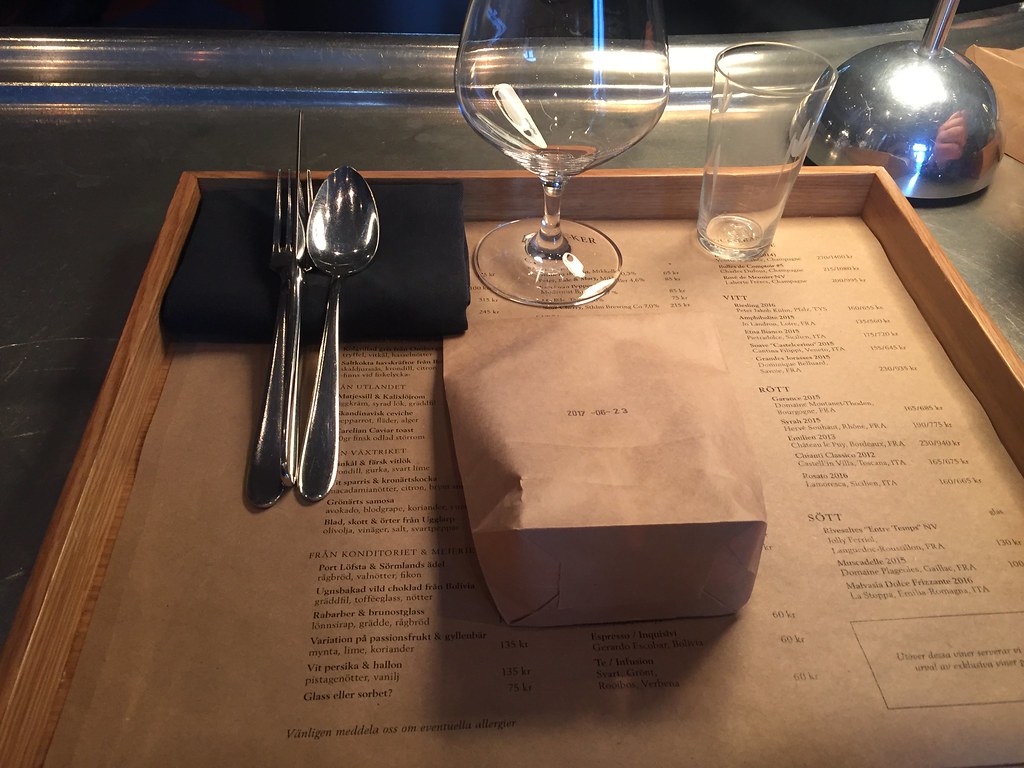 I had a great seat at the bar and ended up chatting with a local couple next to me who were quite the regulars. They gave me some very good ordering advice; my steamed pork bun, Swedish squid, and special Midsummer dessert of strawberries and meringue were all delicious! 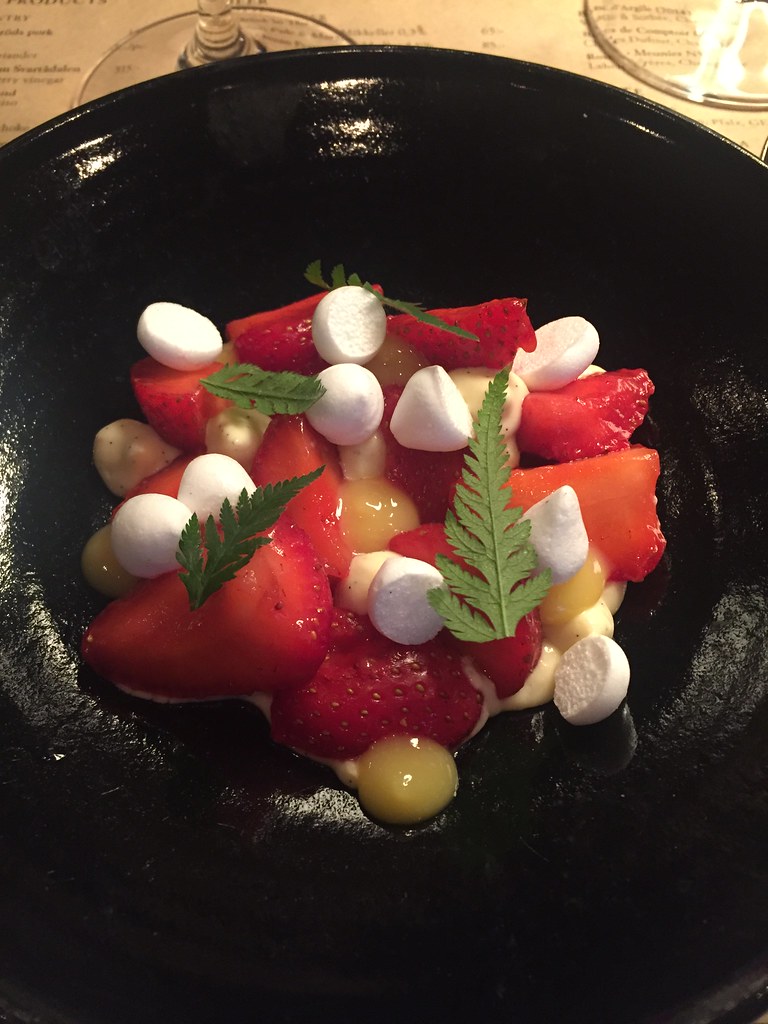 After, I stopped in the Grand Hotel Bar for a nightcap of a Swedish gin martini, it's a beautiful old lounge. And when I was headed back to my hotel it was still light out!

Other posts from this trip:
The Longest Day
30,000 Islands & Counting
Iceland Stopover