A Slice of Skye

I arrived on the Isle of Skye a bit later than I had planned, originally thinking I would get there, grab lunch and then go hike the Fairy Pools and taste at Talisker. But after a 4-hour drive that had my heart racing from time to time, and stopping to gaze at every mountain and lake I passed, I was tired and hungry and ready for a few drinks!

I parked at the Sligachan Hotel and walked across the road to wander along a small trail at the base of the Cullin Hills. It was gorgeously sunny, a creek flowing down from the mountains almost unbelievably clear, and with no one around I felt like I had this little slice of Skye all to myself. 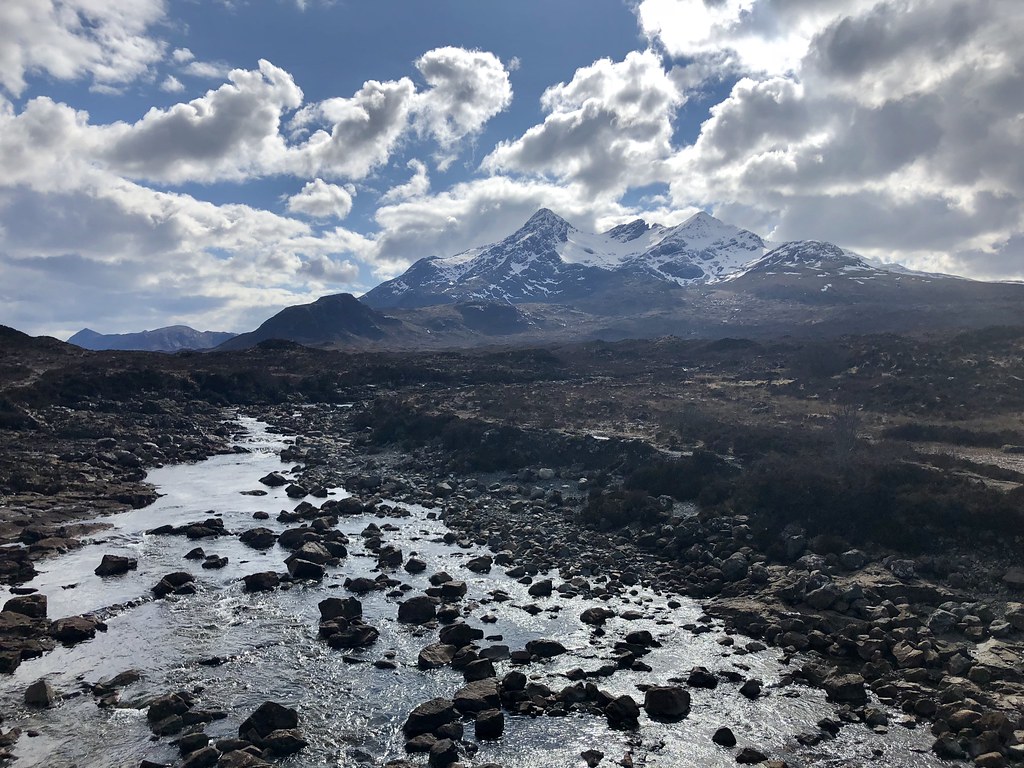 My grumbling stomach finally pulled me away and to the hotel bar for lunch. A local beer (btw, pints in Scotland are larger than normal pints!) and some truly fantastic fish & chips. Turned out to be the best I had on my entire trip. 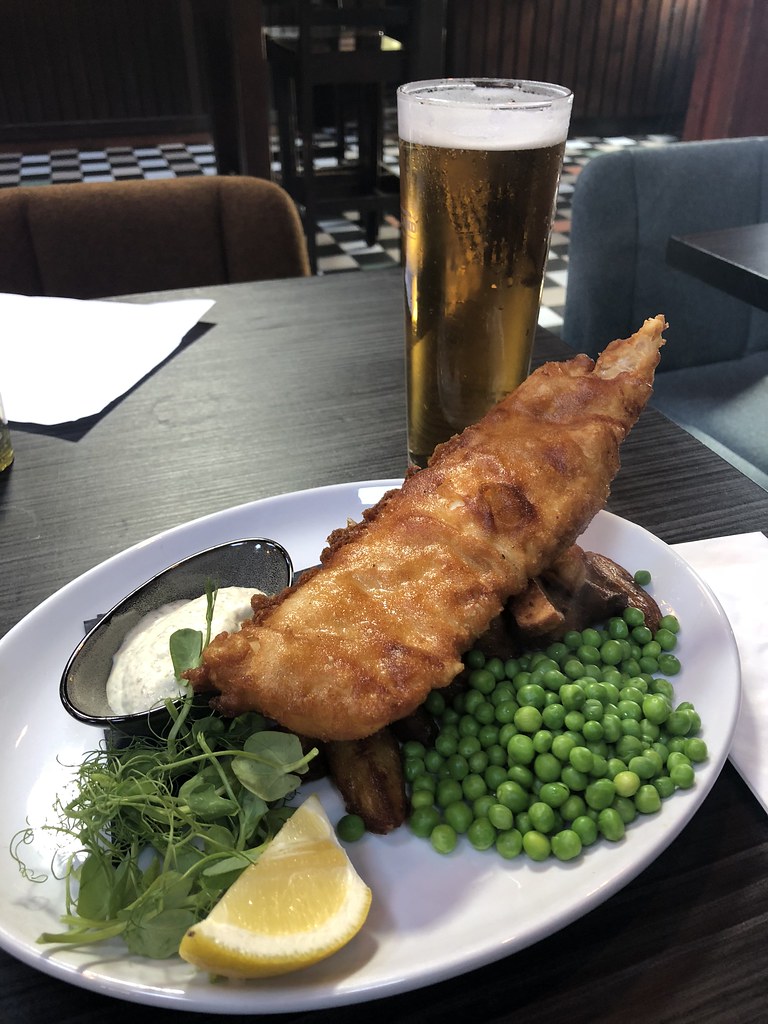 From here it was a 30-minute drive to Portree where I would be staying for the next two nights. This is pretty much the main place to stay on Skye if you want to explore the Trotternish Peninsula, which was the main thing I wanted to do. It’s a very small town without a lot of choices for lodging or dining.

I checked into the aptly named Portree Hotel where one of the staff nicely carried my bag up to my room on the 3rd floor. I had a single with a peek-a-boo view of the ocean. Nothing fancy, not by a long shot, but it would do.

The hotel didn’t have a parking lot but the front desk let me know I could park for free at the Community Center which was just a few blocks away. I moved my car and then went for a stroll around town. It took me about 15 minutes! 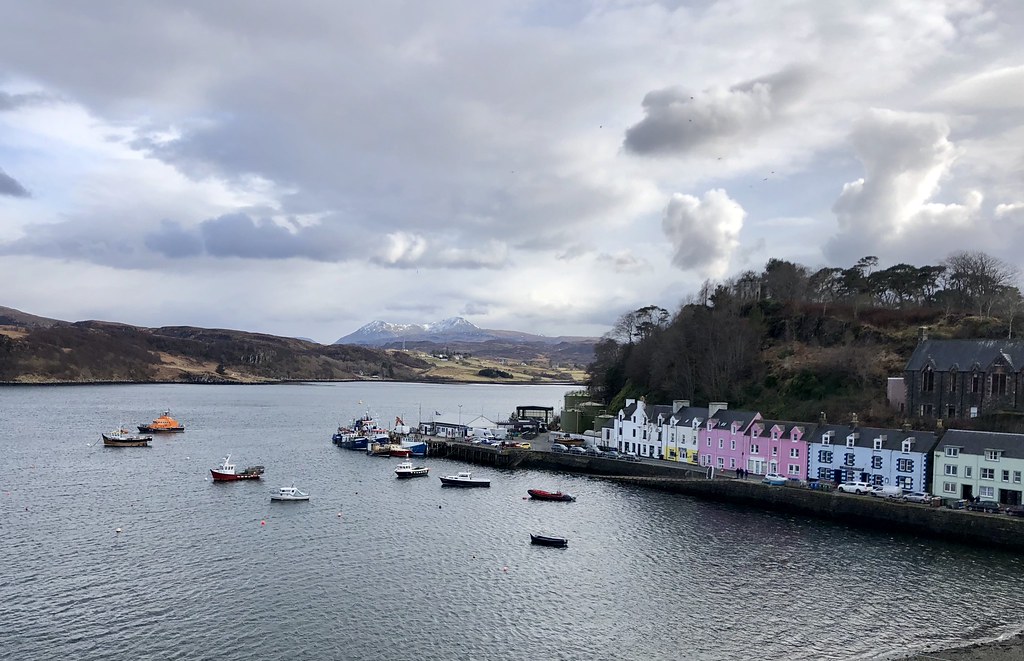 I then walked down to the harbor with its brightly colored buildings, that took even less time! But it felt good to stretch my legs and the weather was lovely.

I stopped into Merchant’s House, had a beer while writing some postcards, and then had a martini while chatting with another couple who seemed to be doing similar hikes and drives as me. Luckily I saw the bartender measure out sweet vermouth before he added it to the gin. Ugh.

Not inspired by any of the dozen restaurants around town I headed back to my hotel which also had a restaurant. It was packed and I didn’t have a reservation but when I mentioned I was staying there they found me a table within minutes. Very nice. And my venison meatloaf was actually pretty good!

Breakfast was included in my hotel price, so the next morning I had some lovely smoked haddock and poached eggs before taking off for the day. I had planned an entire day of driving and hiking around the Trotternish Peninsula, the most northeastern part of the island. 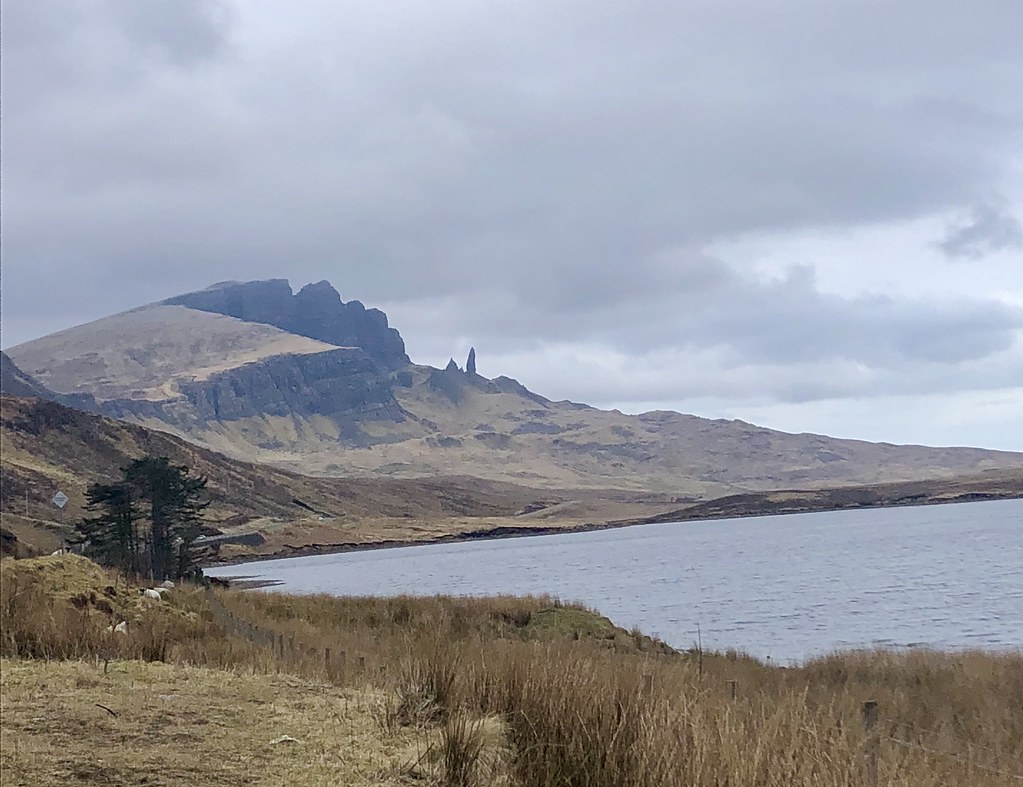 From the moment I drove down my first “one track lane” and saw a large hawk watching me from a fence post, I knew I was in for a spectacular day! My first stop was at The Storr. The parking lot, roadside, and trail were packed! As I started to hike up I realized this trail was also incredibly steep! But there was another trail to the left and two people were coming down from it. I stopped and asked them about the path and they explained it went to the same place, the base of the huge rock formation which had toppled off years ago called The Storr, but was less steep as it curved around. 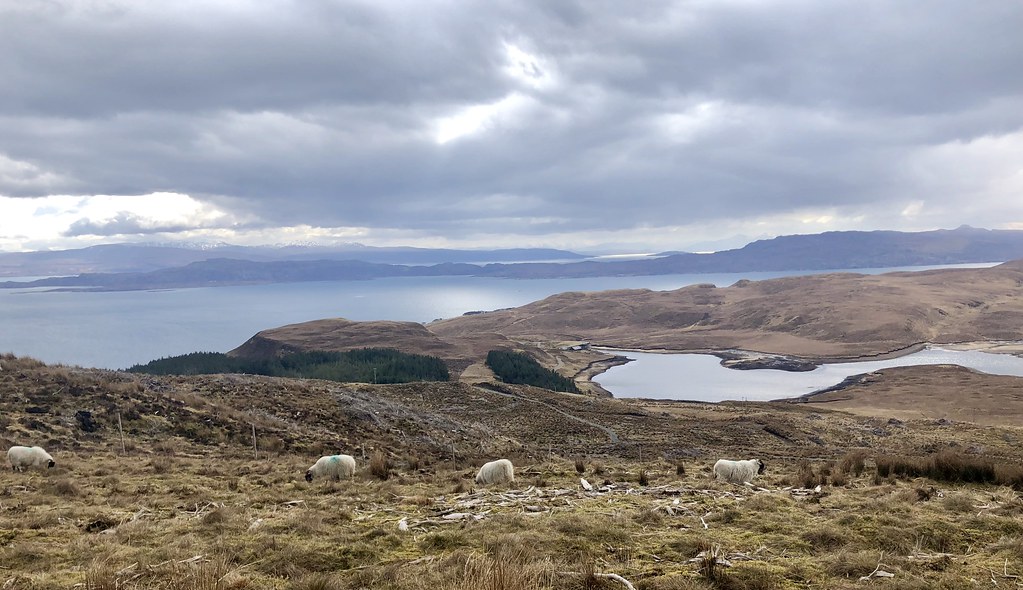 I made the right choice, and I was the only one on the trail save for some sheep! It was beautiful and peaceful and I was having a great time! I got to the main base of The Storr and decided I was good at getting photos from a far. People were looking absolutely wrecked coming down! 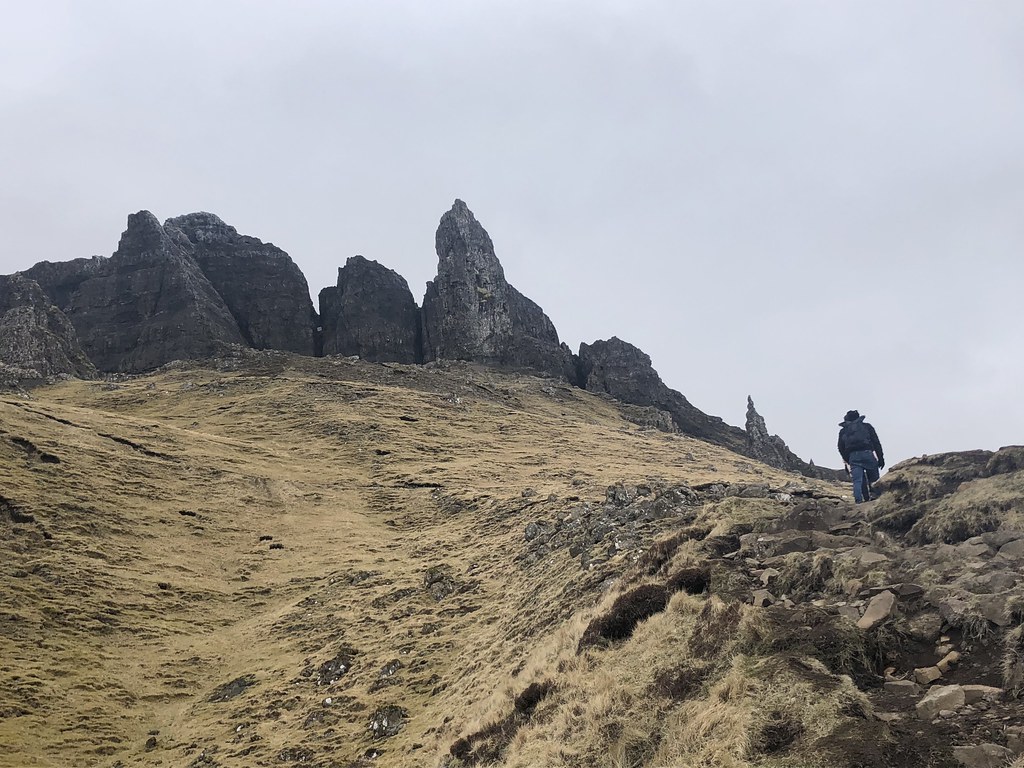 Following the road, my next stop was Lealt Falls & Gorge. More stunning views, this time straight down at a beach which use to have peat factory. The trail here is super easy and the ocean seems to stretch out forever. 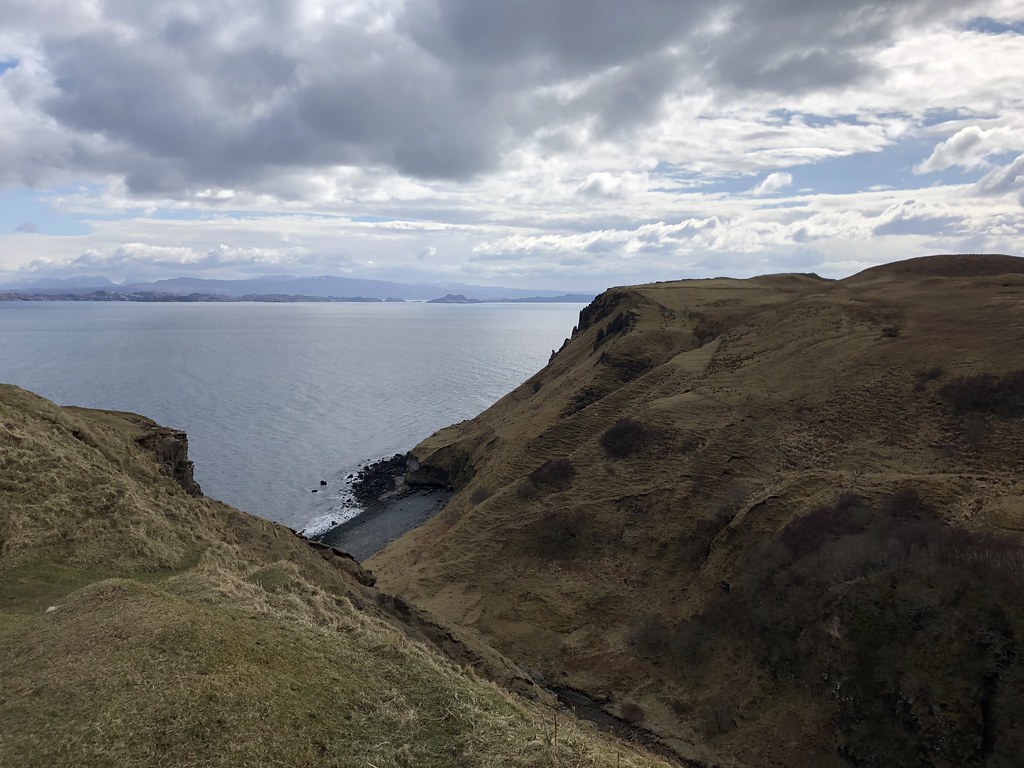 Back in the parking lot there was an elderly man with a small food truck, baking fresh baguettes in a little oven, which he split and filled with a pan fried hot dog and onions. Lunch was served. 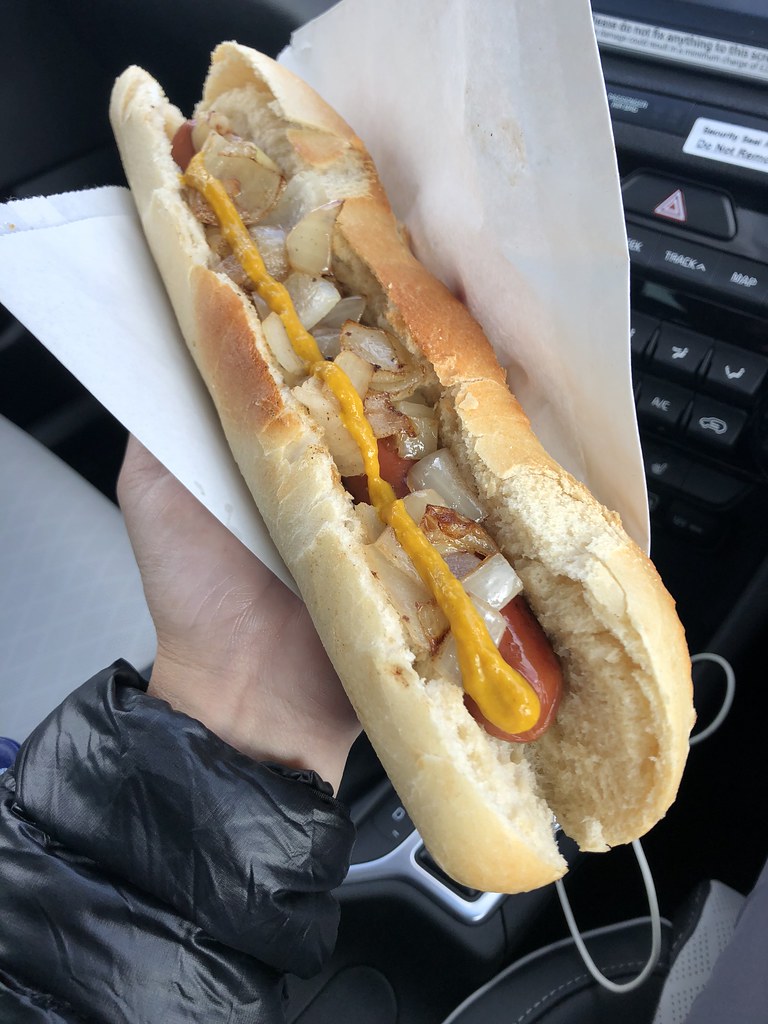 The next stop on the road was Kilt Rock, a 200-foot cliff of volcanic rock that resembles the pleats in a kilt. Some guys were flying drones out over the ocean in front of the cliffs, I'm sure their photos were awesome but the sound of those things is incredibly irritating! 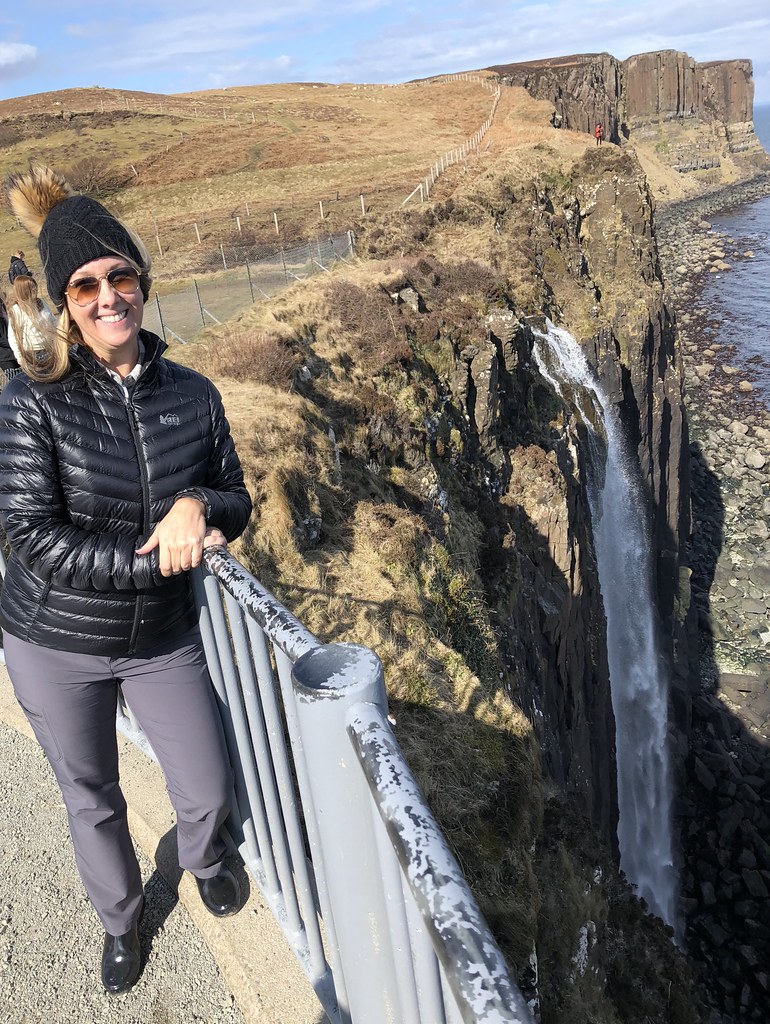 There's no hike here, just a crowded parking lot (I can't imagine this road in the high season!) and some look out areas. But the views are gorgeous.

I turned off onto a smaller road after leaving here and made my way up to The Quiraing. I wasn't exactly sure if I was heading in the right direction as there were no other cars and no signs. 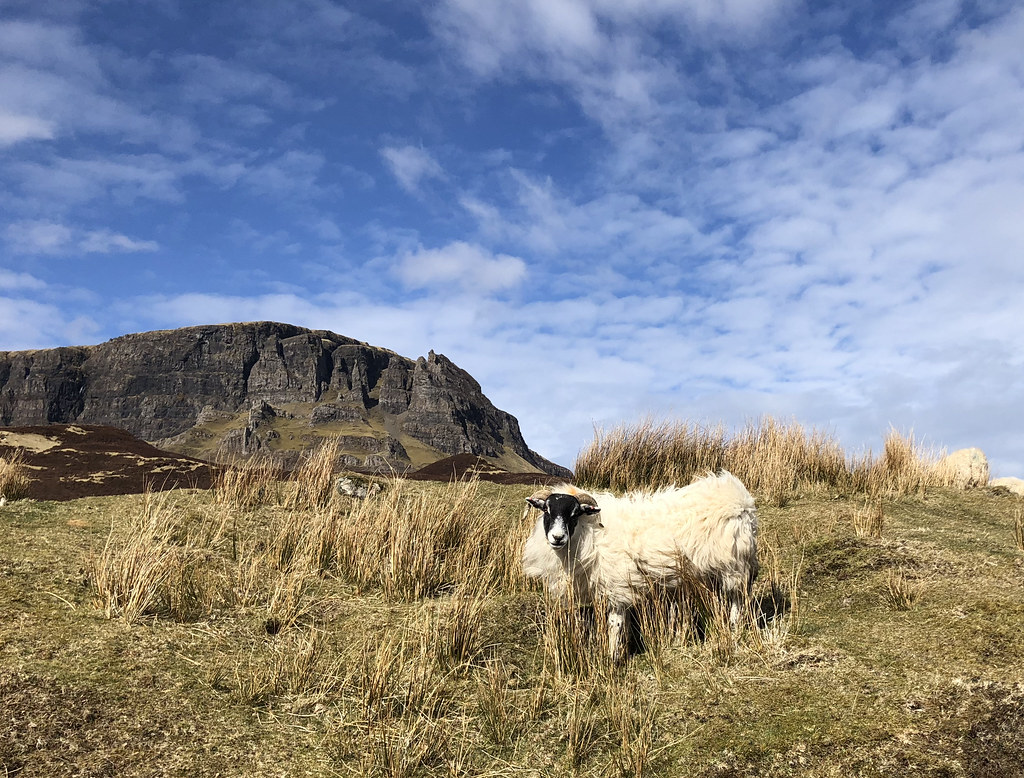 But soon the road started climbing high up the Trotternish Ridge. As I got near the very busy parking lot at the top I noticed that people were parked in the turn outs. When you are on a single-track road, on the top of a very high ridge, and cars are trying to pass you going the opposite direction, you really need those turn outs! Me and another had a VERY close encounter. I got as near to the car, parked in my turn out, as I could, while he passed me without tumbling off the cliff or sideswiping my car. BARELY.

I hiked a way up the ridge, the wind was incredibly strong, and was rewarded with stunning views and strange rock formations. It was amazing! And worth the near-collision! 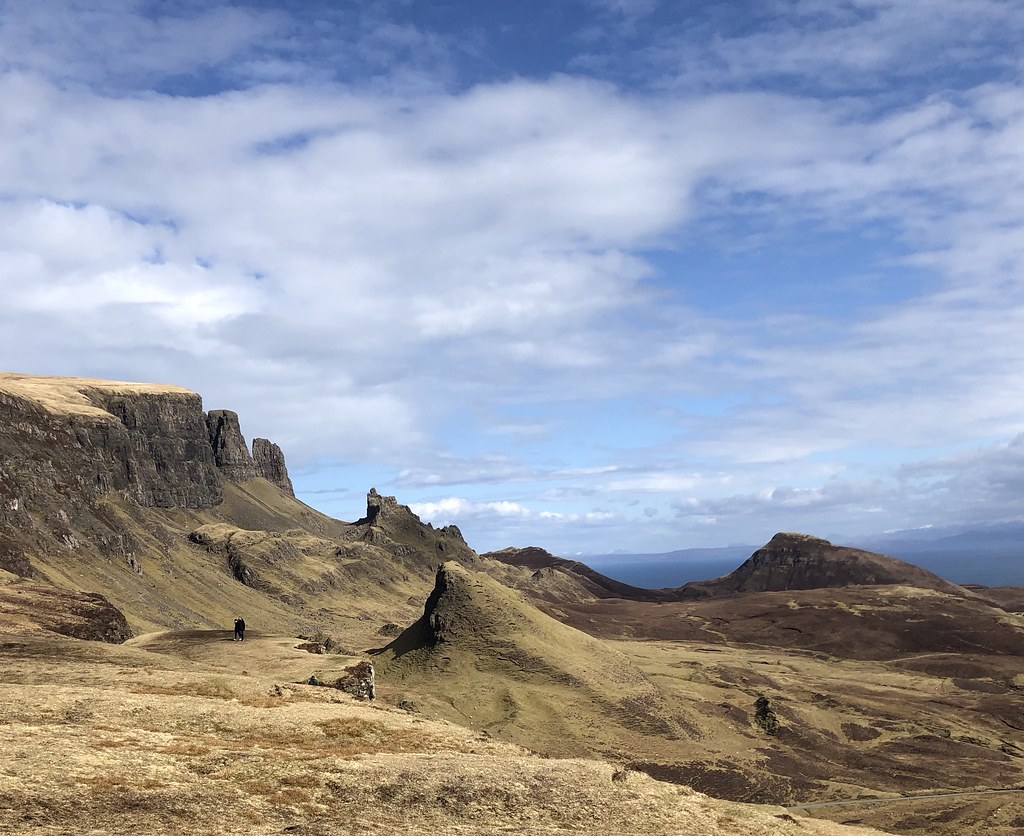 Back out on the main road, I continued around the north tip of the peninsula. The wilderness of this part of the Isle of Skye had me absolutely captivated. It is so remote, naturally gorgeous, wild. I pulled over and hiked out against the wind on a bluff where I could see the remains of Duntulm Castle in the distance. The fort was built in the 12th century and was abandoned in the early 1700's. 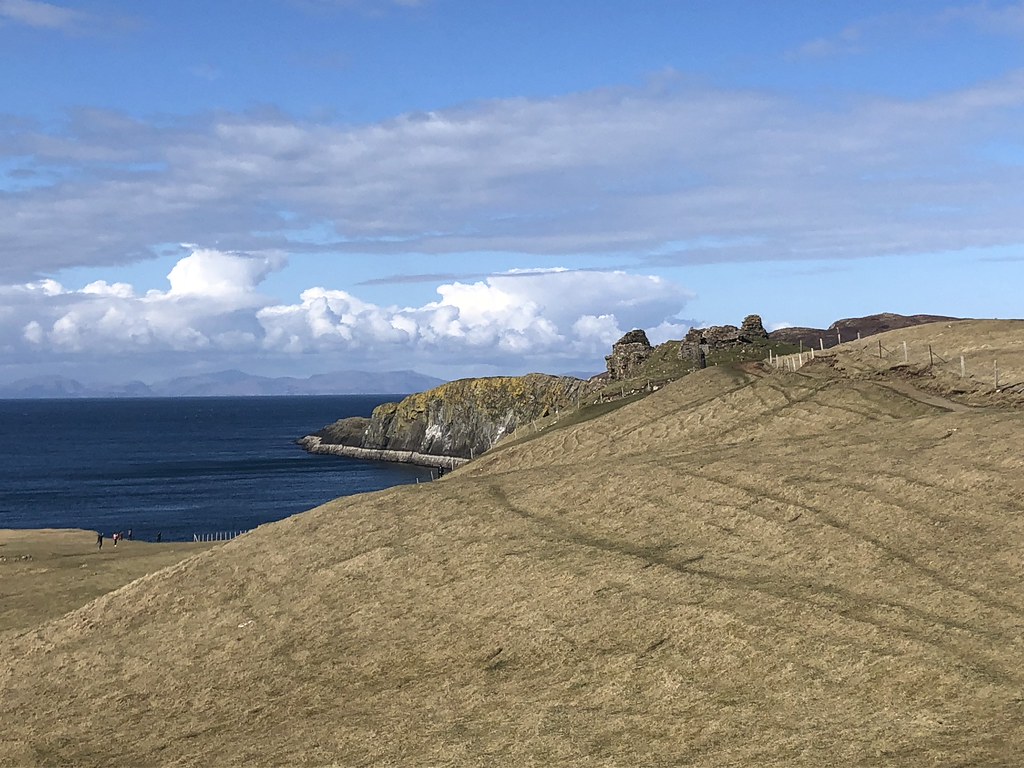 In the distance I could see the Outer Hebrides Islands. I'm absolutely going out there on my next trip to Scotland! My newest obsession.

At one point on the road a large tractor hauling bales of hay was coming directly at me. Both of us had passed our turn outs and since he was bigger than me, the only thing I could I do was to back up. Which I suck at. So as I slowly drove in reverse back to my turn out, with the Scottish tractor driver right in front of me, we both laughed and he gave me a hearty wave and smile when he could finally pass. But for the most part it was just me and the scenery. 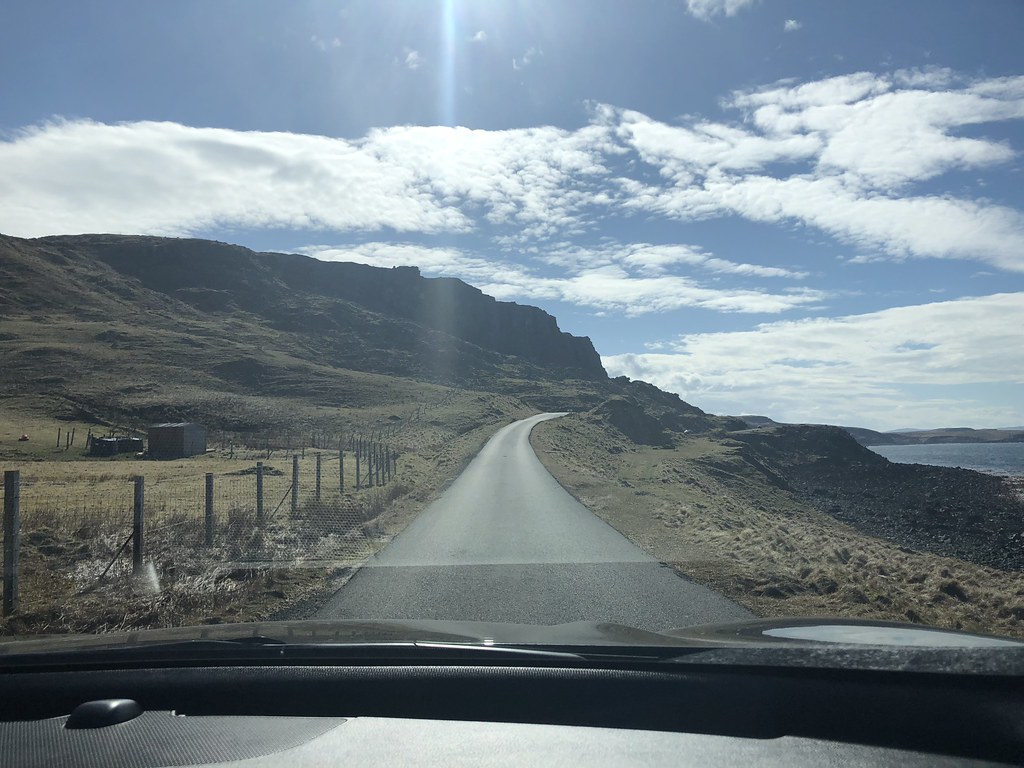 My last "official" stop for the day was at the Museum of Island Life where thatched huts are set up as a traditional small town. Three of the huts are original and over 200 years old. If you stop, and you should if it is open, they only take cash both for tickets and items in the gift shop. 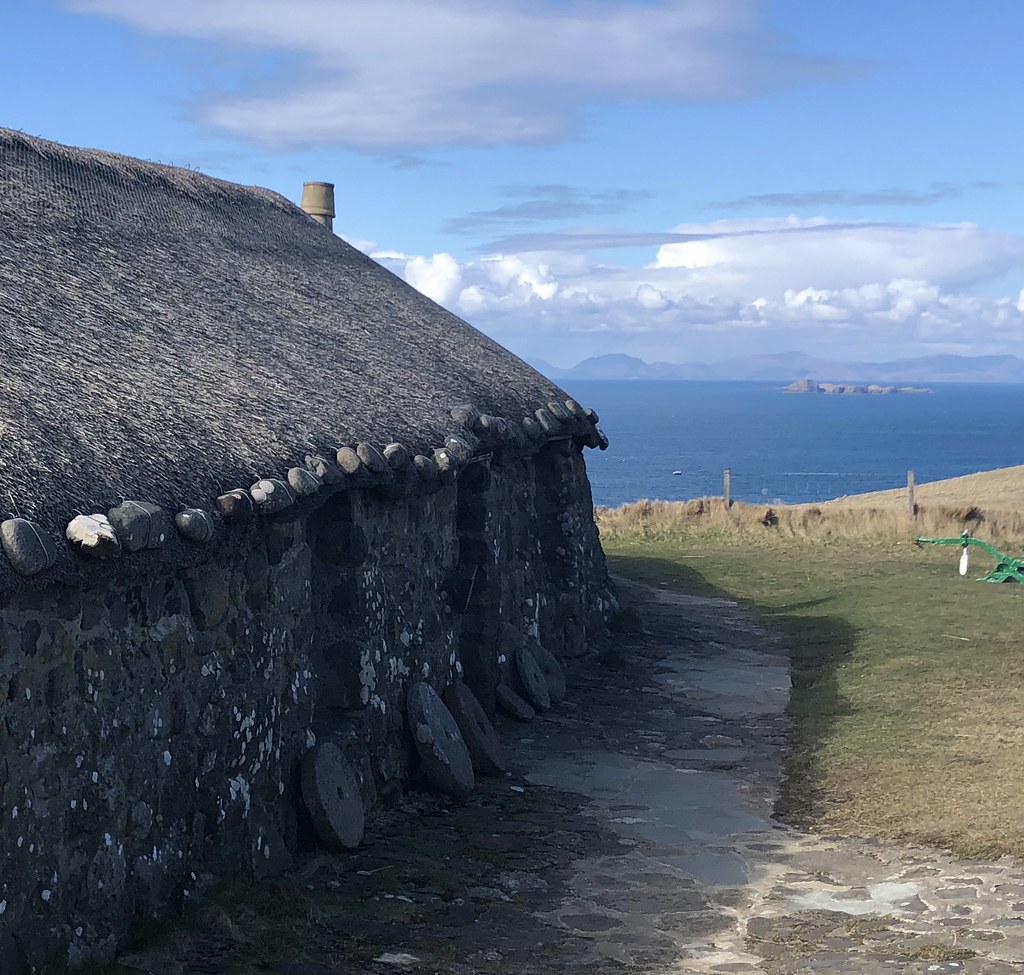 I continued along the coastal road, through the beautiful little town of Uig, past more gorgeous scenery. This shit just does not get old for me. 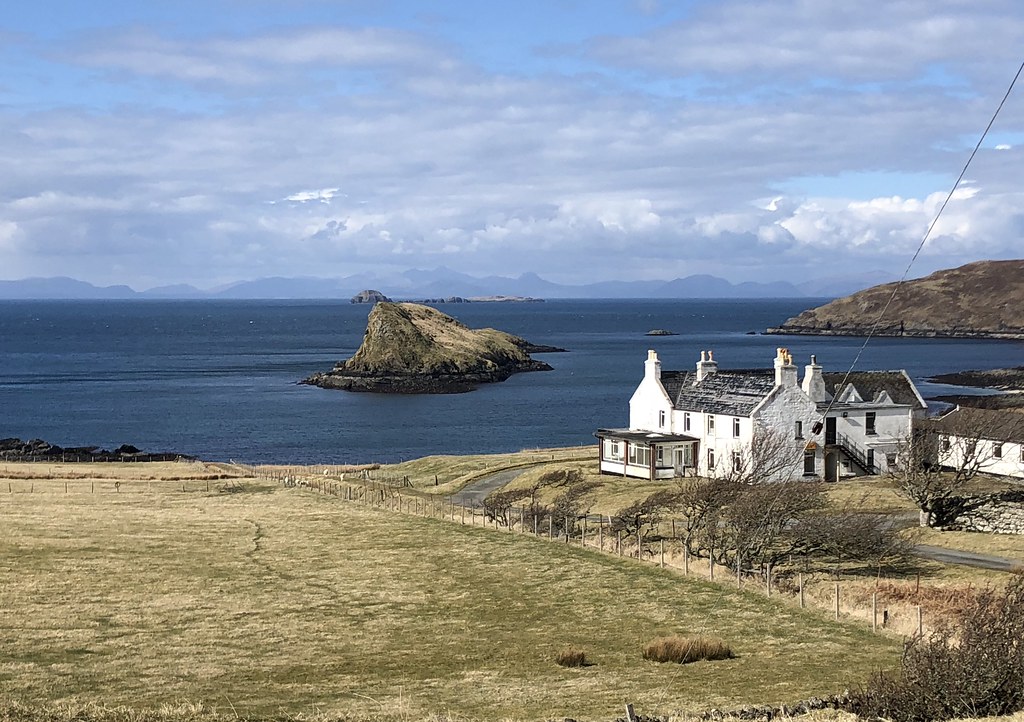 I'd left Portree at 10am and was back in Portree at 4:30pm where I stopped into the Isles Inn for a much deserved beer before getting cleaned up and going out for dinner at The Granary. I rewarded my day of driving and hiking with a very good lamb steak and a delicious sticky toffee pudding. And wine. 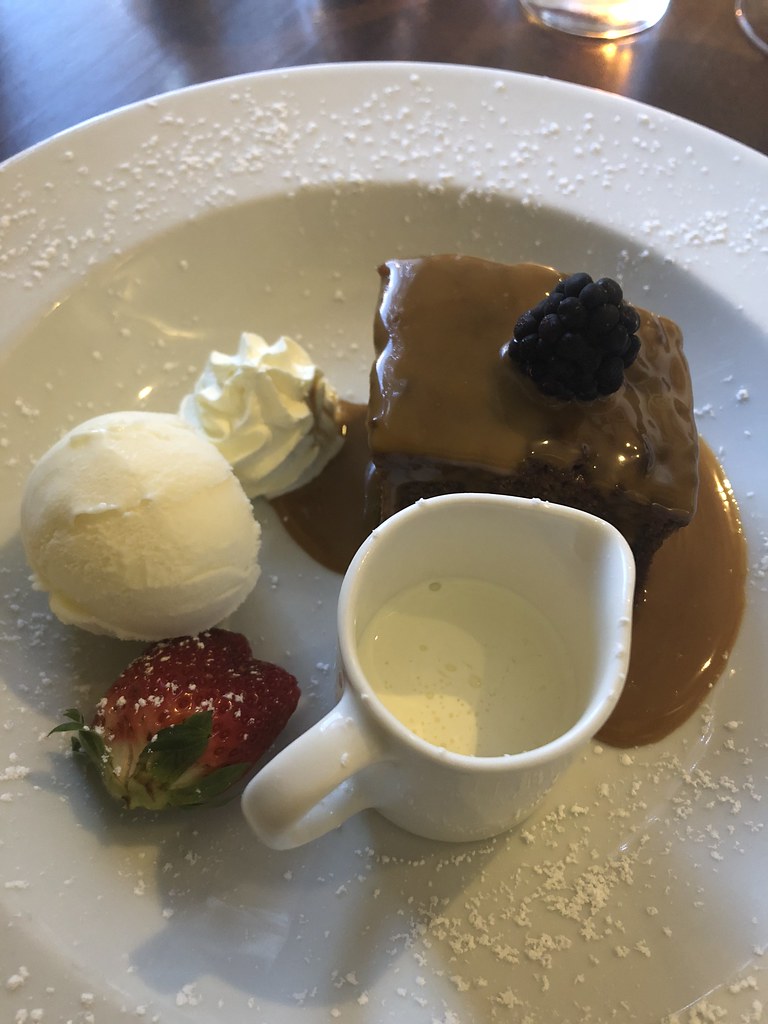 The next morning I had a traditional Scottish breakfast with sausage, bacon, black pudding, potato scone, egg, and tomato (they were out of mushrooms which are normally included). I've come to realize that I although I like English breakfast, I'm not a fan of the grainy sausage that the Scotts use. First world problems. 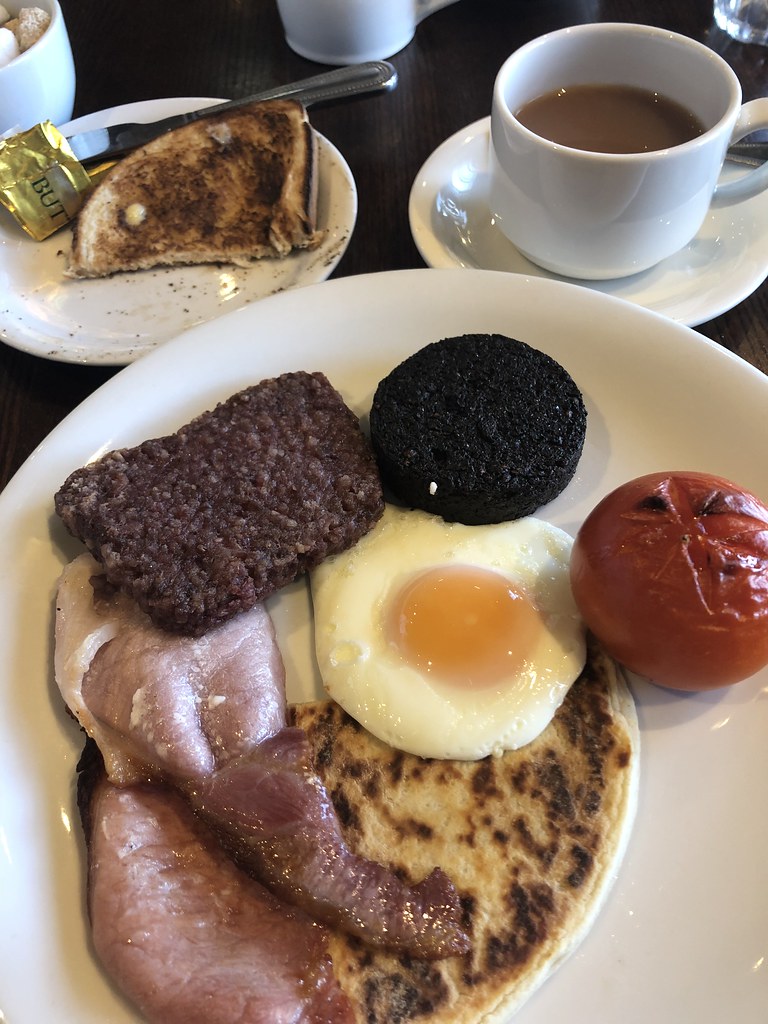 I checked out of the Portree Hotel and drove south and west on the Isle of Skye. The morning was brilliant and the Cullins were absolutely stunning as I drove past. 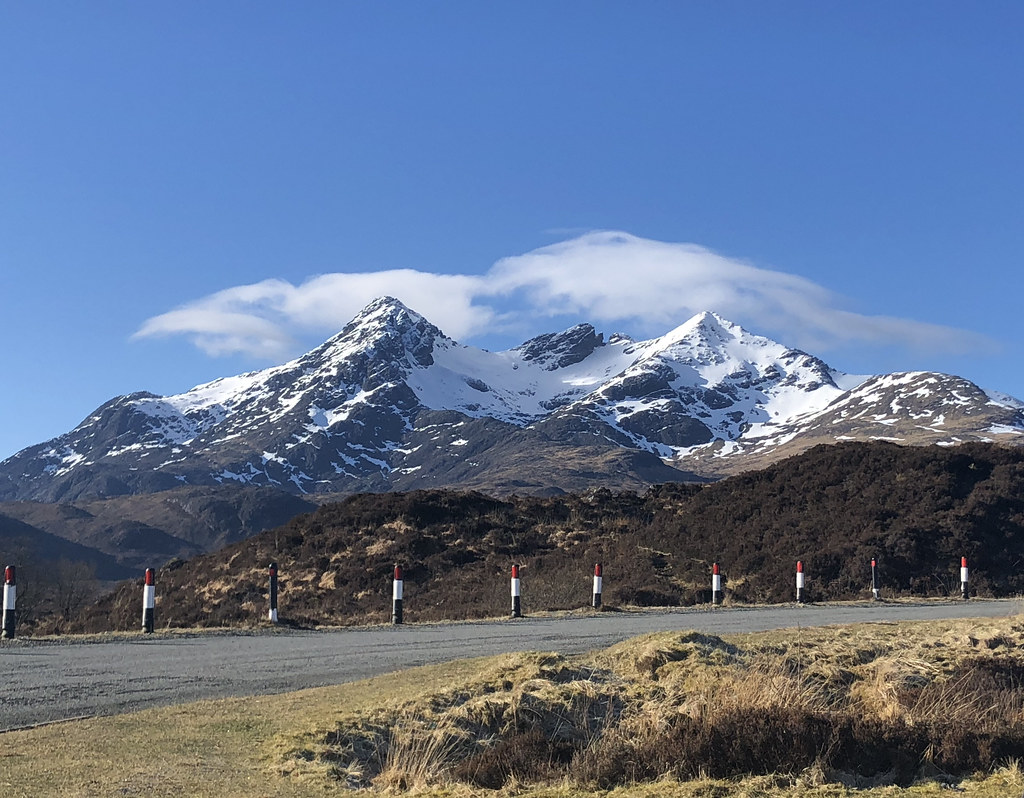 I arrived at Talisker Distillery at 10am and grabbed the last spot in the 10:30 tour. My hotel had tried to call the day before to help me reserve but they were already closed. I was worried that they might not be doing tours as it was Easter Sunday, but the receptionist assured me that such a holiday would not get in the way of whisky. ha! 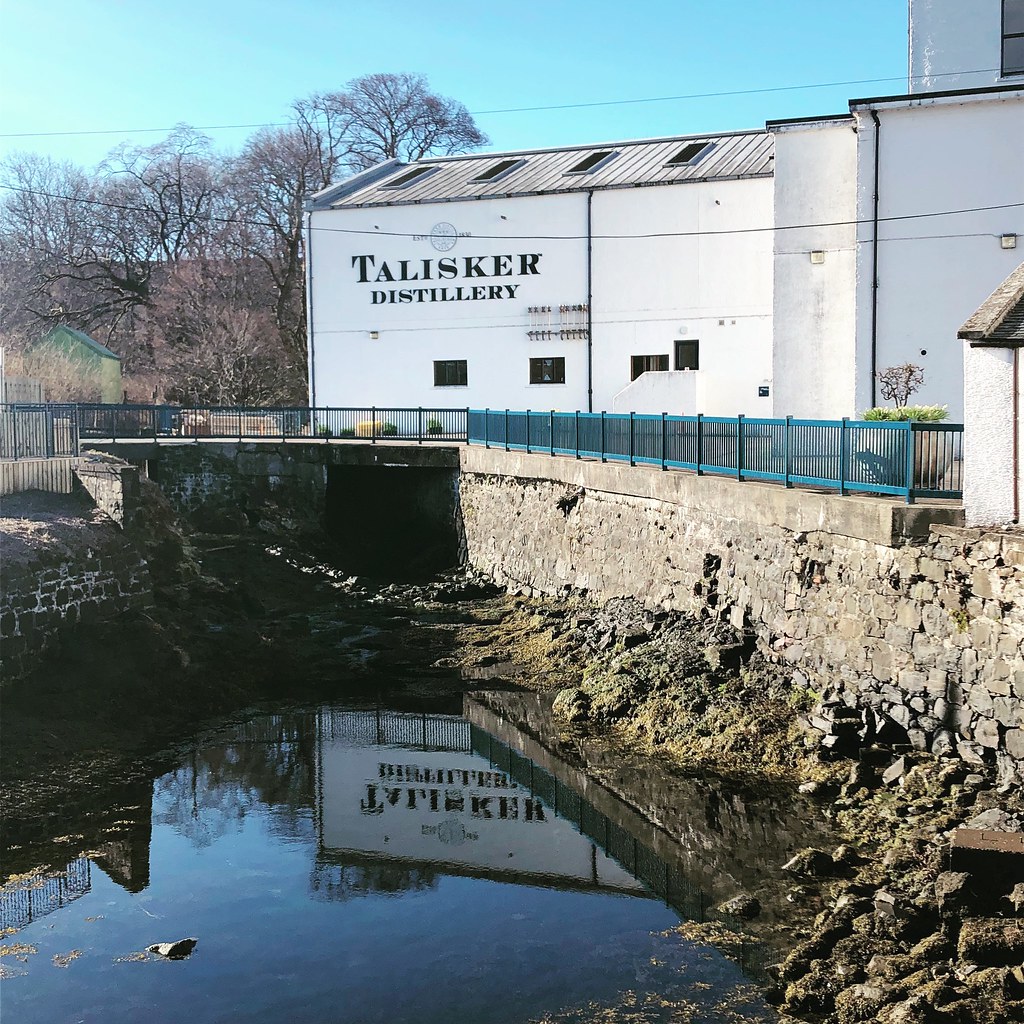 Talisker is owned by Diageo now so they don't allow photos on the tour, but our guide Nettie was excellent and the distillery is very interesting, it is the oldest on the Isle of Skye. And I ran into the couple I had had drinks with in Portree so we swapped some hiking stories from the day before (the husband was still recovering from the hike up The Storr!)

I left the distillery and drove out to the Cullins to hike out to the well known Fairy Pools. The day had gone cloudy but it was still gorgeous and I was really looking forward to this hike. The parking lot was another clusterfuck but I found a spot and was on my way. 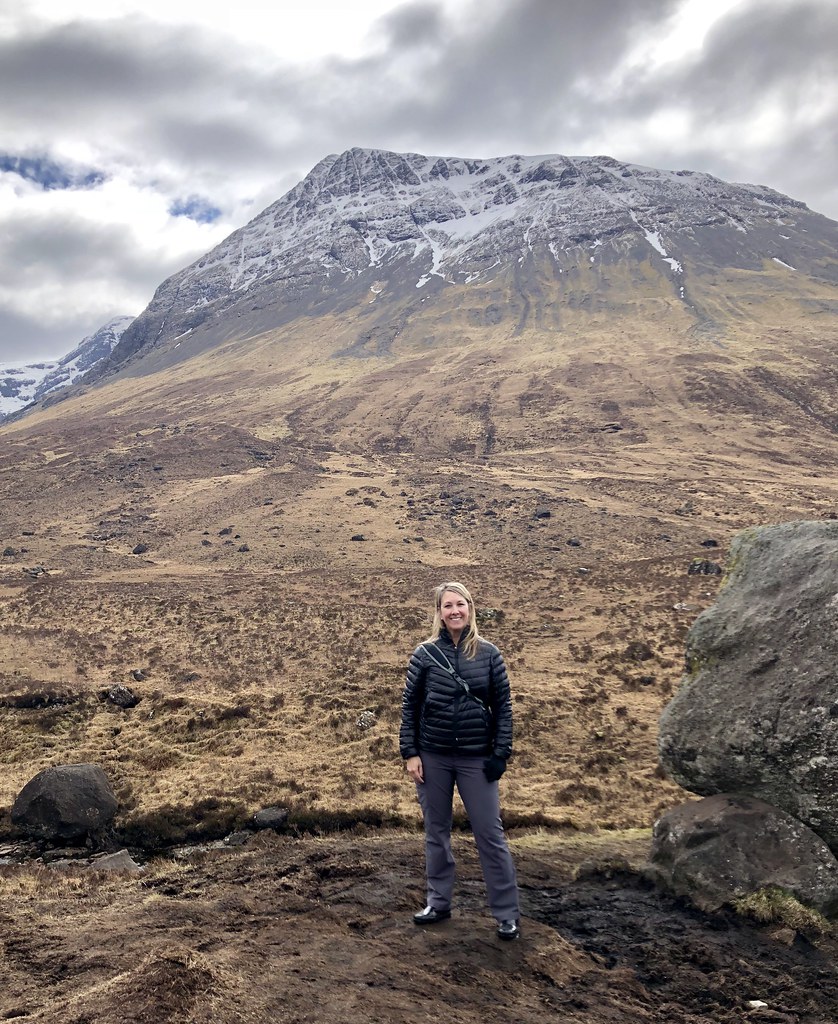 It's short and relatively flat as the trail follows a stream that soon turns into a series of small waterfalls filling incredibly clear pools. The mountains are a dramatic backdrop! 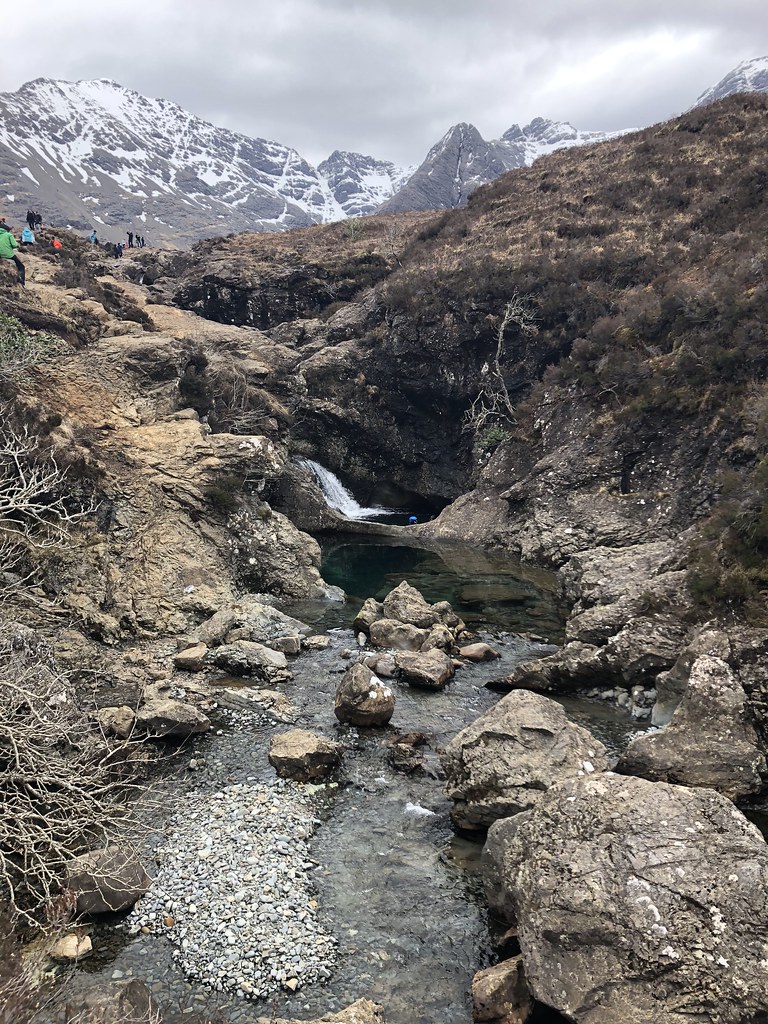 In one of the pools there were some bad ass divers exploring! I thought this was an absolutely beautiful hike and only took about 1 hour round trip (much less if you aren't gazing at the scenery and taking lots of photos!). The hardest part of the hike is coming back up the hill to the parking area, and I also had to ask a man for a hand while crossing one part of the stream. There are large rocks you step on to cross but I don't have the best balance and didn't want to chance falling in!

I went back to the bar at the Sligachan Hotel for lunch and had my first Cullen Skink, a delicious  and creamy soup of smoked haddock, potatoes and onions. I had a long drive ahead of me, I was heading to Oban, so I just ordered a 1/2 of beer to go with it. Oh and there was an Easter Bunny and lots of families having brunch. Beer and soup was such a better option. 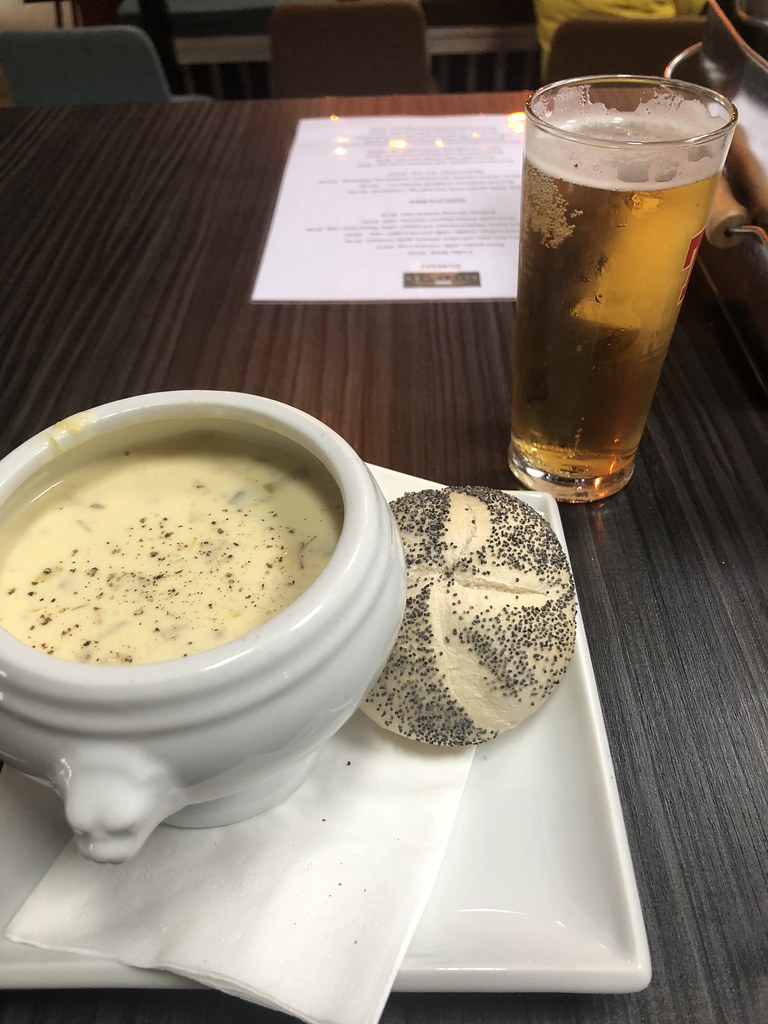 I can't believe how incredibly beautiful the Isle of Skye is! If you are planning a trip to Scotland I'd put it on my do-not-miss list for sure.

All photos from Isle of Skye here.

Other posts from this trip:
Hamilton & Other Hijinks in London
The English Spirit
An Introduction to Unicorns
The 45th
Big Castle, Small Distillery, Highlands
Oban & the Isle of Mull
A Wee Time in Glasgow