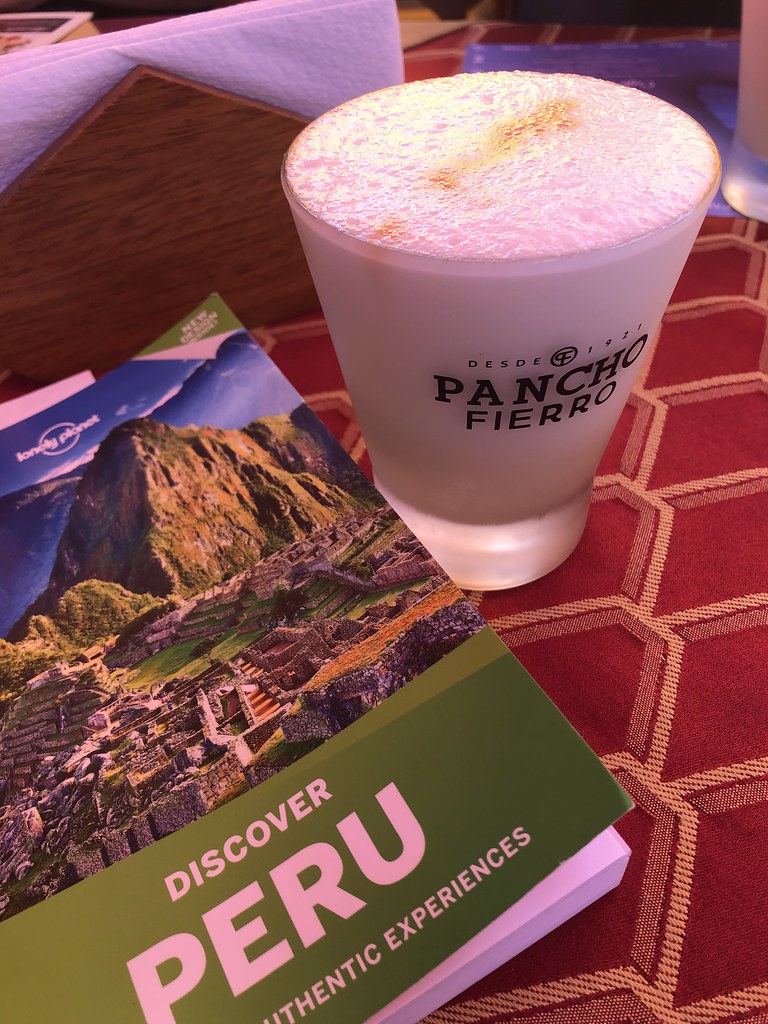 After spending Christmas in Miami, Forest and I are were off to Peru (my 46th country) for our annual New Year's Eve trip! We had business class seats on LATAM airlines and were looking forward to a relaxing and boozy flight.

Now I've flown in business class on many different airlines (and it's hard to complain about any business class) but I have to say that this LATAM flight was soooo disappointing! The seats were really old, the leather ratty, and the buttons sticky. ugh. They did lay flat, and they were comfortable so that was good. There were no amenity bags; no slippers, no eye masks. For a 5 1/2 hour evening flight? I've flown coach internationally and have had that!

There were no menus handed out, no courses to the meal (the salt on the tray was Himalayan pink salt which we thought was quite bougie however), and we had to continually ask for beverages. Really poor service, if that is how business class is, I probably would be really disappointed in their coach. Needless to say, I won't be flying LATAM internationally if I can help it again. Entitled rant over.

We arrived in Lima at 10:30pm and had a car waiting for us. A friend of mine who lives in Peru was extremely helpful in recommending her car service, and arranging for them to pick us up. The driver greeted us with our name on a sign, took our luggage, and away we went into town. Note: taxi drivers do not take credit cards but they do take American dollars or Peruvian Sol (you can get either from cash machines in the airport or bring your own dollars.) 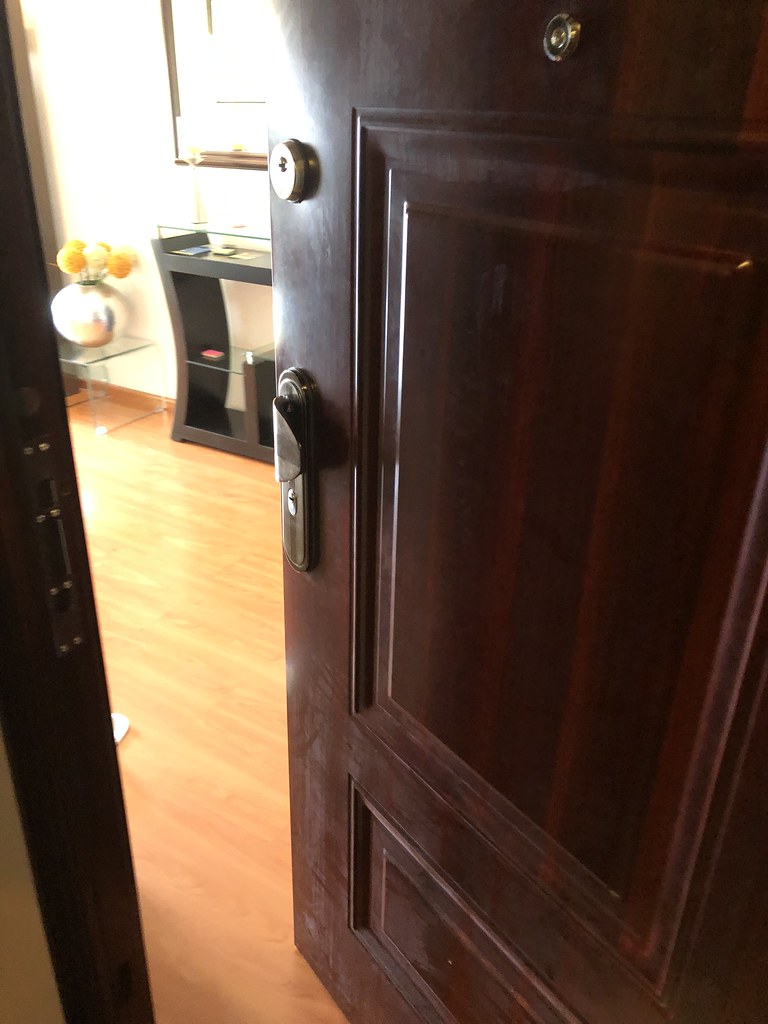 It only took us about 30 minutes to get to our Airbnb in Miraflores where we met Caitlin and Thibault who had arrived a few hours earlier. The apartment building had security person at the front destk and the elevator opened directly into our apartment. Very cool! It had 2 bedrooms and a small "maid's quarters" room off the laundry room. A big living room/dining room and kitchen as well as a small balcony. It was perfect for us and I'd recommend it to others. 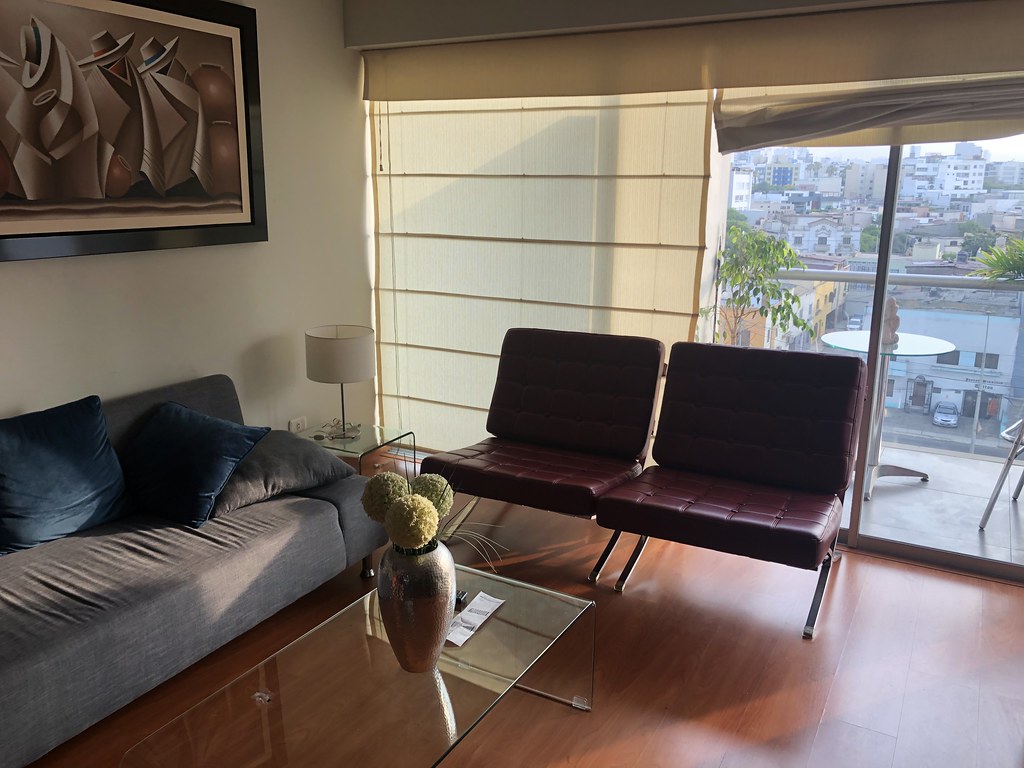 Since it was late when we got in, and Thibault had bought some empanadas for everyone, we just had a little bite and a nightcap and were off to bed. But the next morning we all headed out to explore our Miraflores neighborhood and walk around the city.

First stop was Parque Kennedy, the central park of the area. The park is filled with beautiful gardens, lots of vendors selling traditional Peruvian snacks, and cats! The cats were initially introduced to help get rid of a rat problem. Now there is a group that takes care of them and puts on adoption drives. And people go to the park just to play and hang out with the cats! 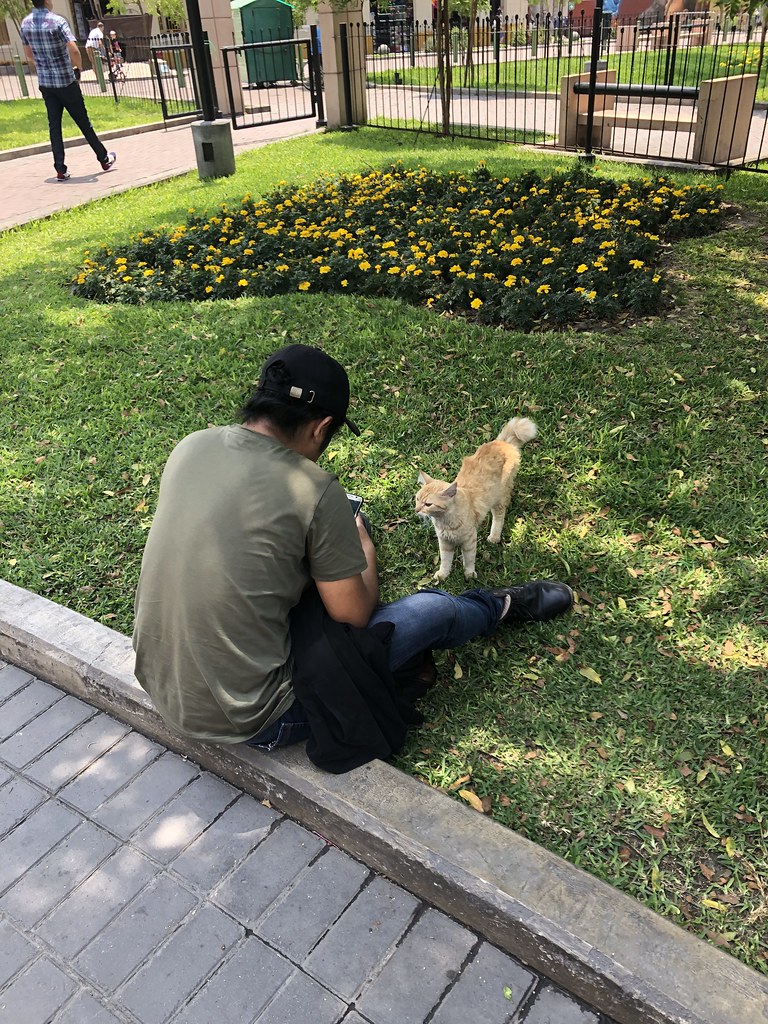 We stopped for our first pisco sour at Cafe de la Paz, across from the park.  Pisco sours are the national drink of Peru, the local liquor pisco is a distilled clear brandy. We planned on trying a lot of them while in the country! 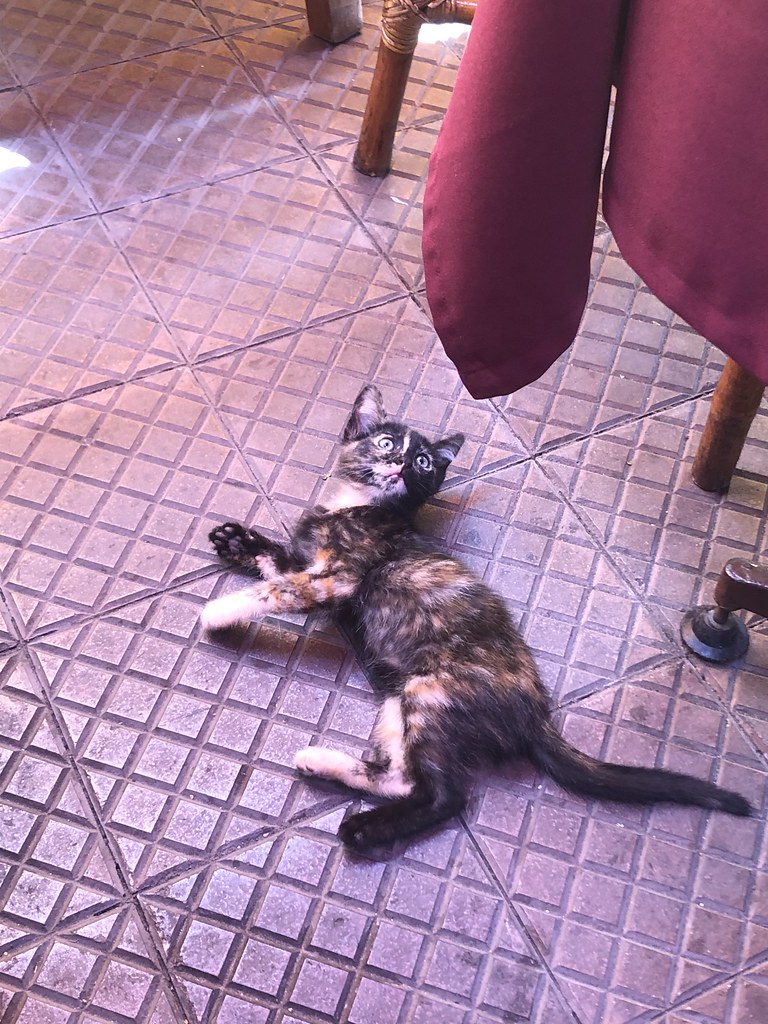 Being so close to the park, we had a tiny kitten stop by our table. She was not much bigger than my hand. Awwwwww!

From here we continued on our walk and headed to Larcomar, an outdoor shopping center with fantastic views of the sea. 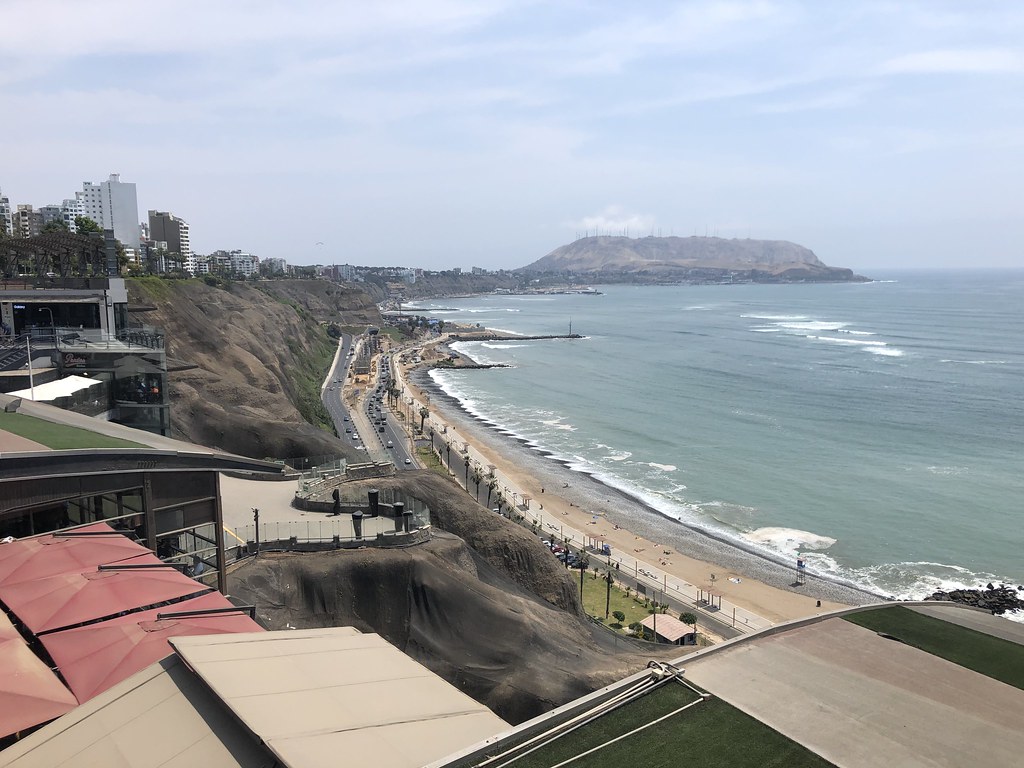 This neighborhood of Lima is really quite pretty, and upscale. We never felt unsafe except for the near run-ins with joggers!

Lima also has a good network of Ubers so we called one to pick us up and whisk us to the Country Club Hotel for a pre lunch pisco sour. The hotel, which dates from 1927, is very old-school glamourous. In the wood-paneled Bar Ingles, we found a lovely menu of cocktails, both classic and contemporary. 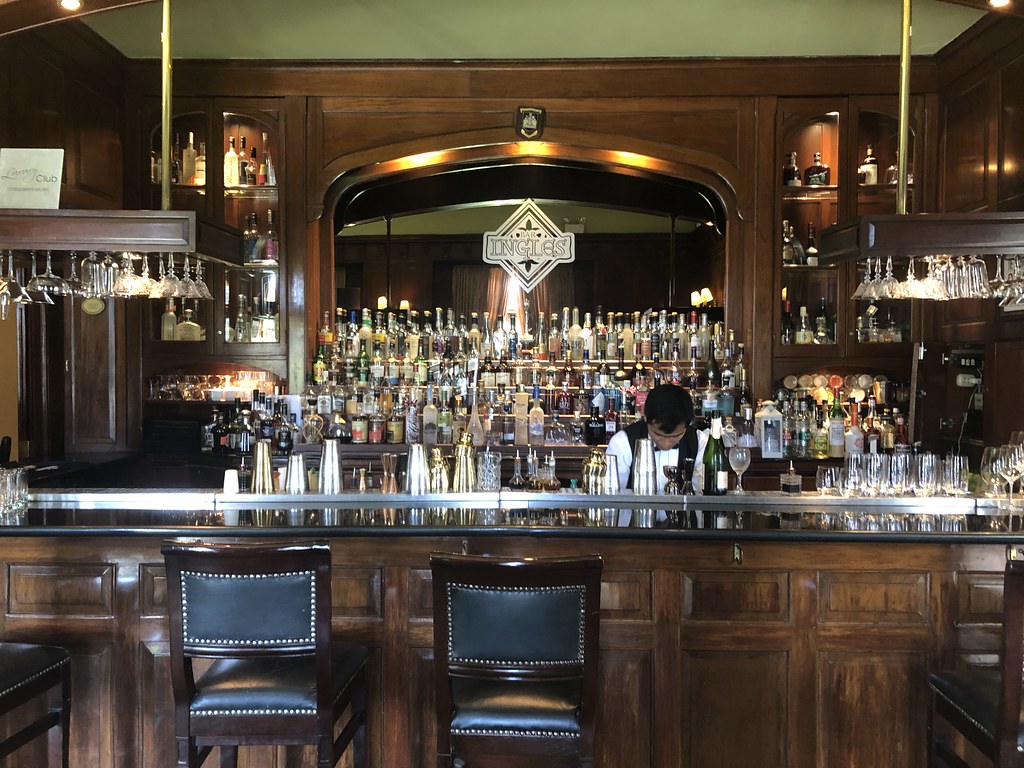 The drinks here were much more expensive than we'd seen elsewhere. But the bartender was great, explaining all the different styles of pisco, and which ones lent best in certain preparations. We all ordered a round with a different expression, and all of us thought they were delicious! In fact, they'd be at the top of the list by the end of the trip. 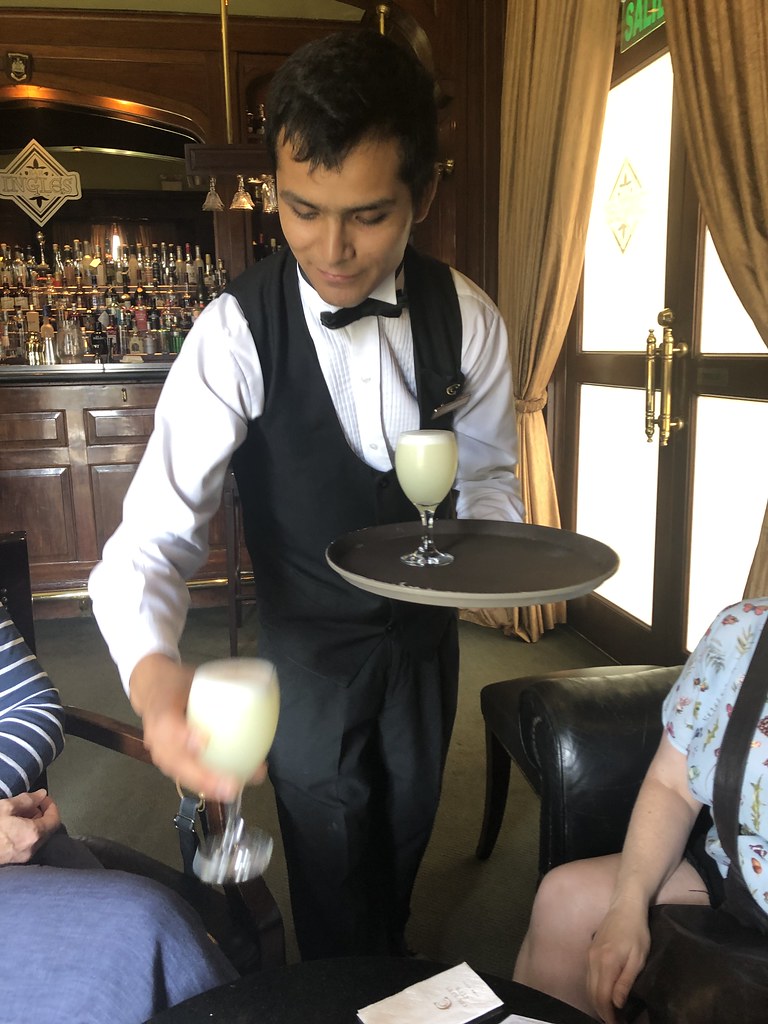 Thirst quenched, we Ubered to the very popular La Mar for a late lunch. This restaurant, known for their ceviche, doesn't take reservations, so we figured showing up late on a Thursday would reward us with a shorter wait. Wrong. 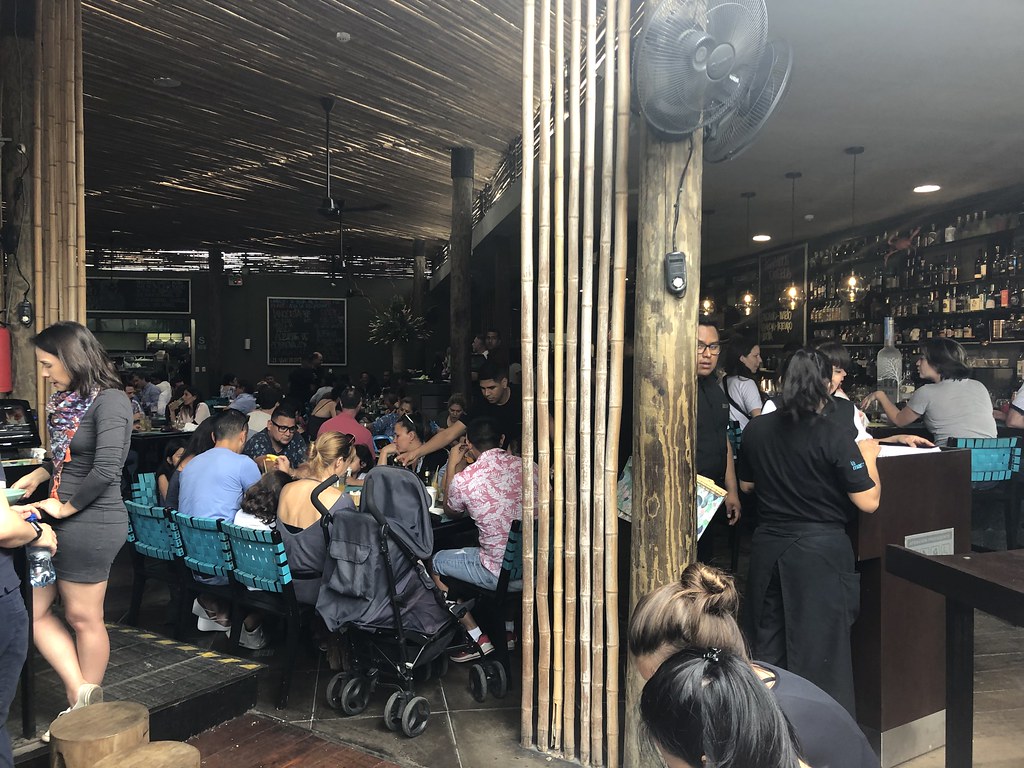 From what I could tell, this place is always packed. And for good reason! The food was some of my favorite of the trip! We waited with another pisco sour before being seated after about 30 minutes. We decided to go with a combo of 3 styles of ceviche; the classic with white fish, the mixto with primarily shellfish, and the nikkei with tuna in tamarind marinade, referred to as leche de tigre. All were fab, but that tuna was really something! 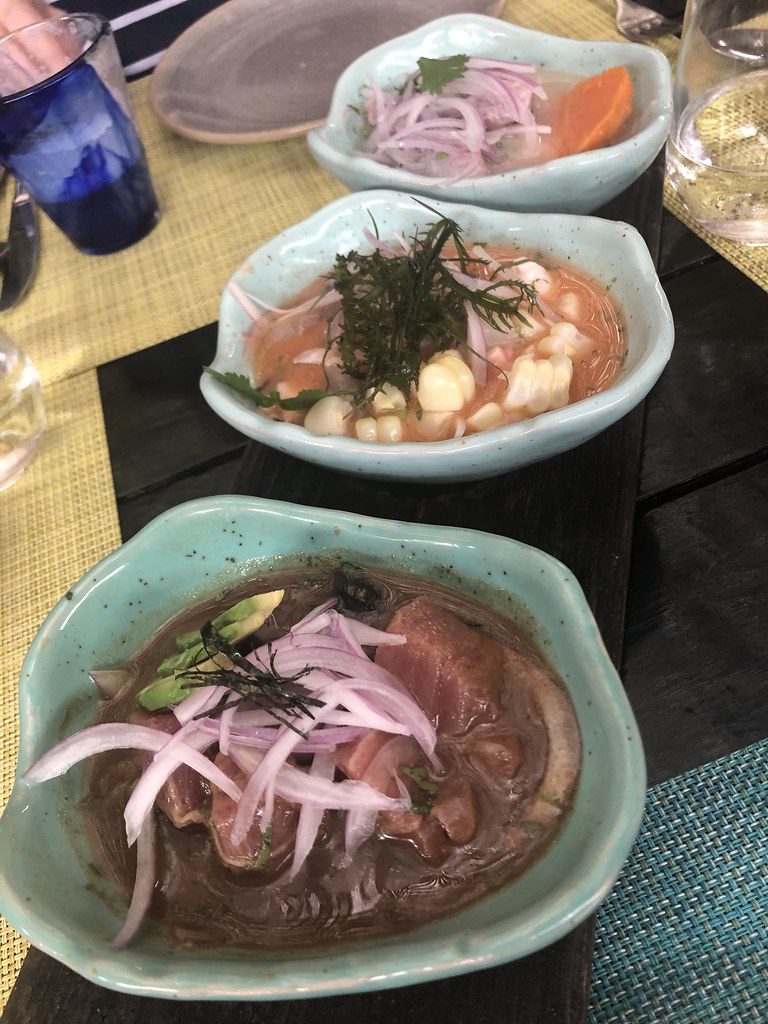 That evening we headed to The Reserve Park to take in some of the incredible Magic Water Circuit. This beautiful park is filled with lit fountain displays of all sizes that run daily (except Monday). It's pretty incredible and I'd highly recommend it! 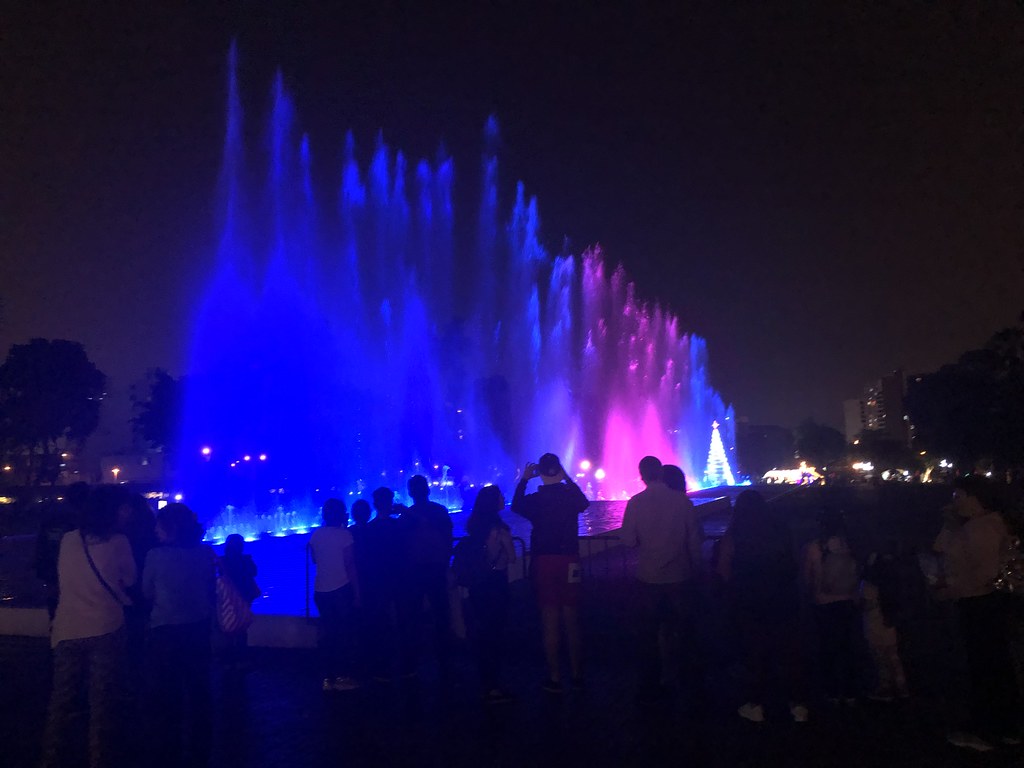 Because of our tight schedule, we didn't have as much time to wander around as we should have. I'd give this a full hour if not a few. The park is large with lots of different fountains to see.

Drinks were had at Carnaval Bar, a very fun spot with unique and creative cocktails. We were greeted with little bottles filled with a boozy libation to sip on as we perused the menu. 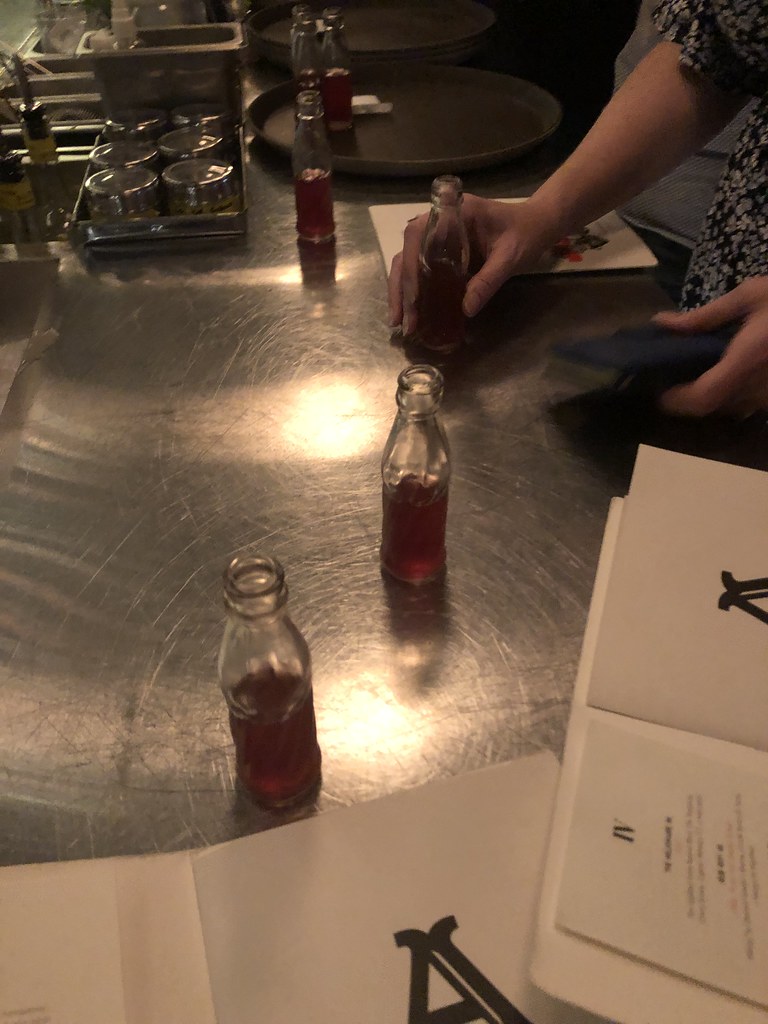 The bar was really busy and originally we were at a stand-up, but soon the bartender found us a little booth we could share with some others. We settled in a for a couple of rounds of great drinks, great service, great atmosphere! I'd say it's a do-not-miss! 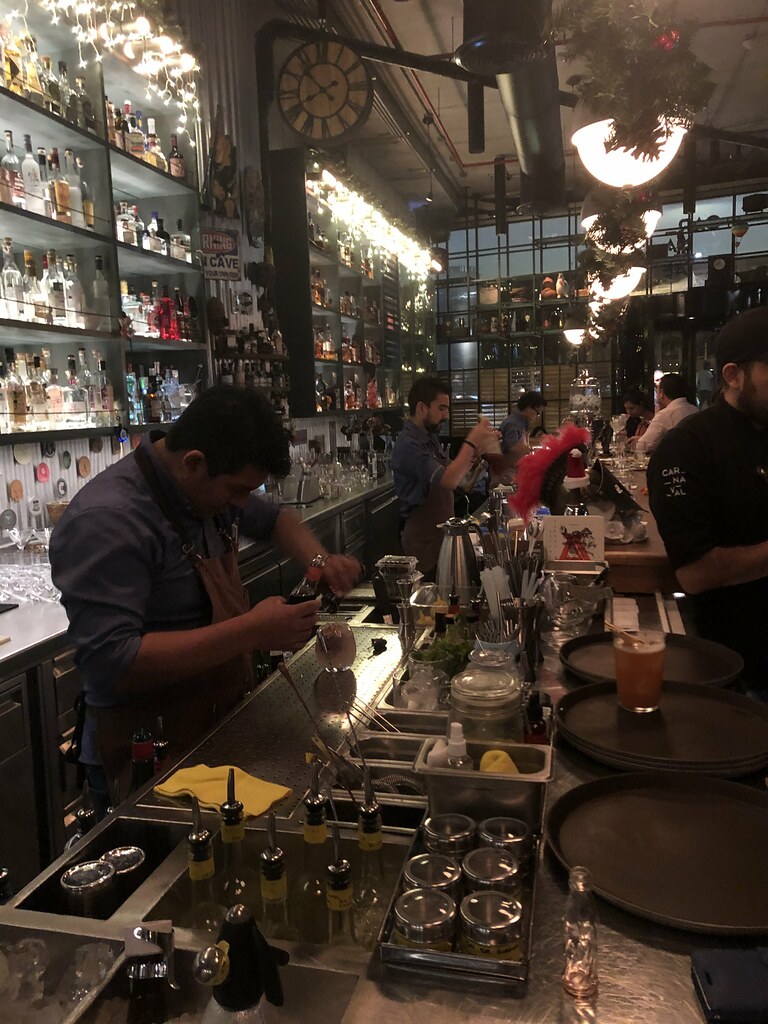 After tabbing out, we made our way to Astrid y Gaston, housed in the amazing Casa Moreyra, a 17th century palace. The space is absolutely beautiful, with many rooms filled with gorgeous people dining on gorgeous food. I was surprised as I had expected something smaller. But I wasn't disappointed. 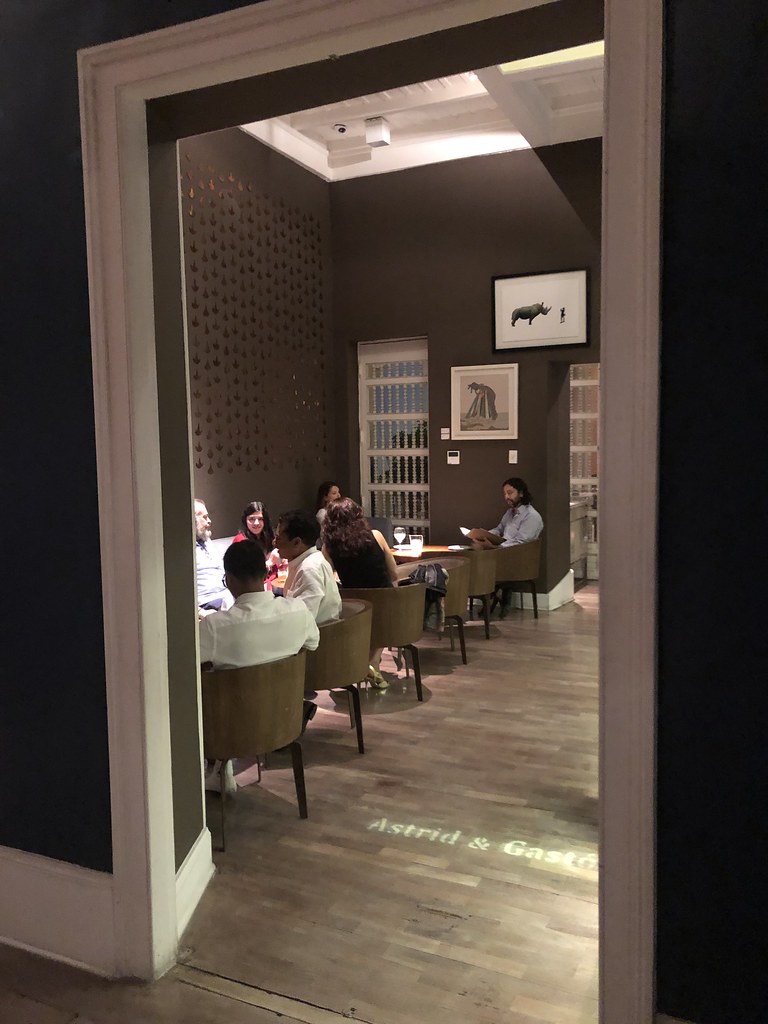 I had made reservations for the á la carte menu as I wasn't sure what everyone would be in the mood for. When we inquired if we could change we were told no. I could have sworn I had read on the reservation site that it wasn't a problem to switch. But I just went to reread it and the menu isn't served past 9:30pm. A little miscommunication due to language barriers led us to believe the service was a bit snotty.

We were all pretty worn out from our full day of running around so it was for the best that we did the á la carte. I started with this fantastic duck taco! 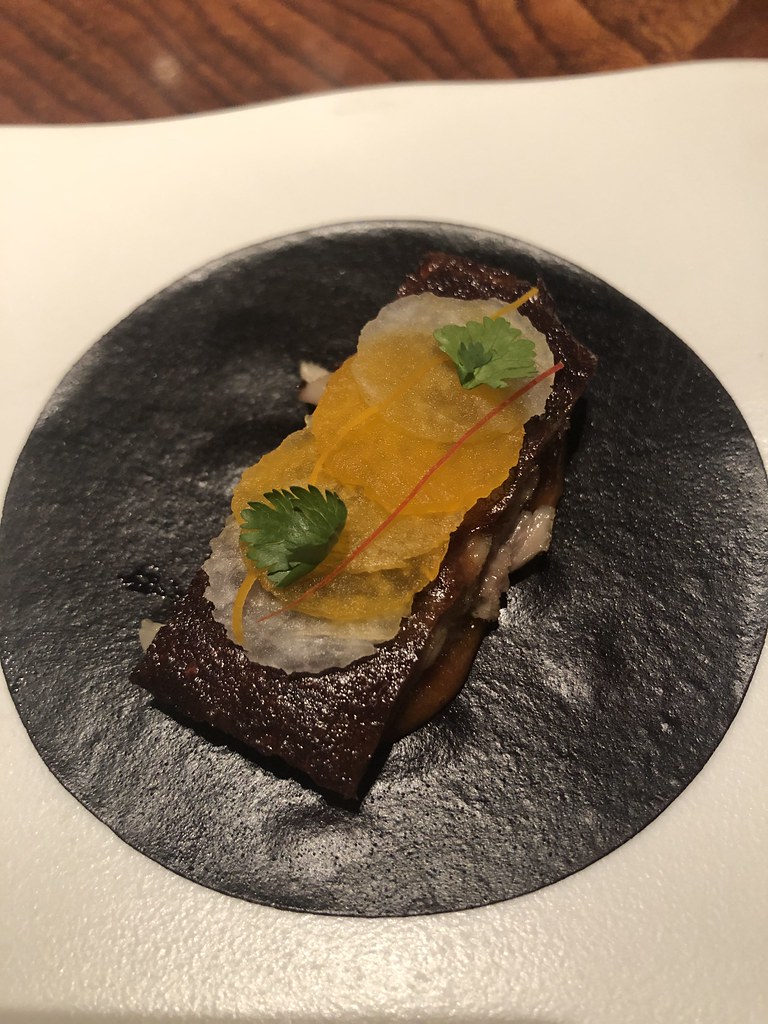 And then I had my first cuy (guinea pig). This one was anything but traditional (grilled whole and served on a stick). Crispy, tender, and served with corn gnocchi, the flavor and texture reminded me of suckling pig. 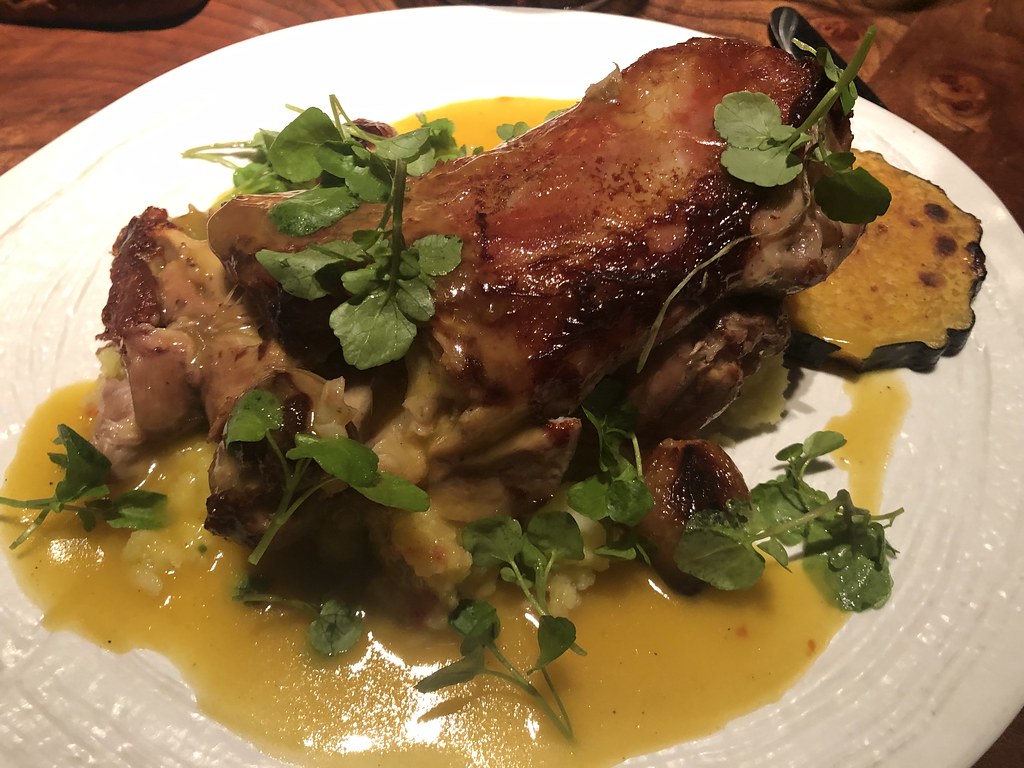 Everyone enjoyed their dishes but we all agreed that the mains were entirely too big and the sauces were all a tad sweet for us. But the presentation and ingredients were lovely. 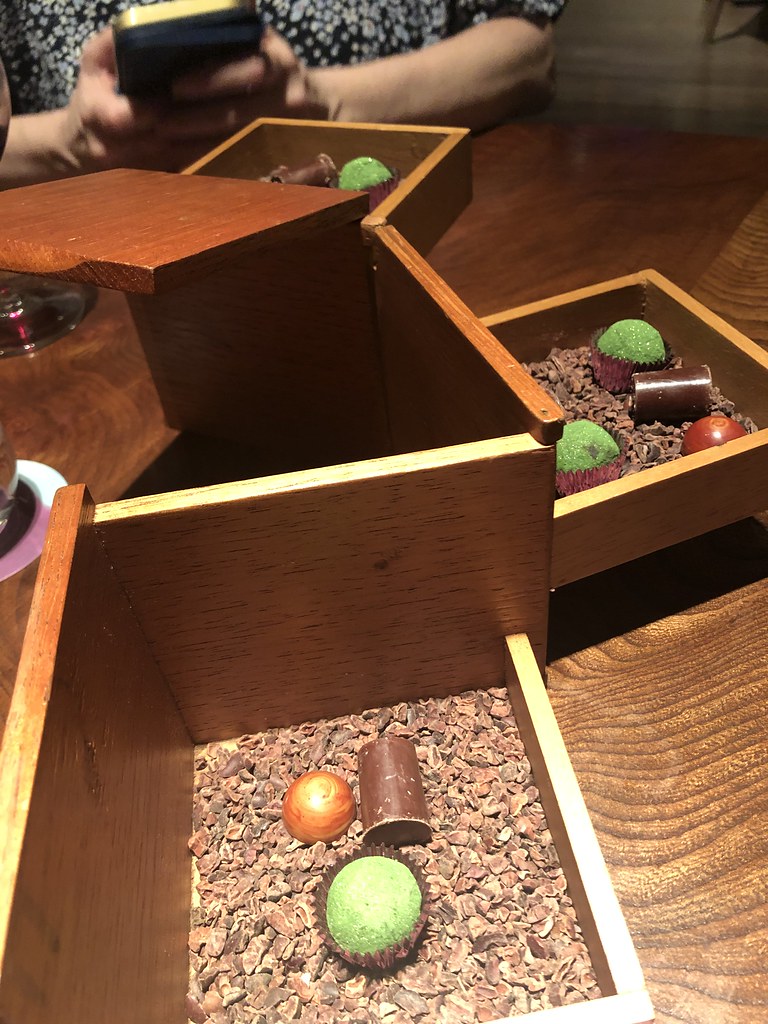 Book well in advance if you plan on dining here!

We'd be back to explore more of the City of Kings in 9 days, but the next morning we were up early, with our car service driving us through crazy insane traffic, to the airport so we could catch a flight to the Amazon River!

Other posts from this trip:
24 Hours Miami
Welcome to the Jungle
Piranhas and Pink Dolphins
Ringing in 2019 in the Amazon
The Sacred Valley of the Incas
Discovering Machu Picchu
Dining at 11700 Feet
Cusco Daytrip
Return to Lima
at March 07, 2019