After a great morning in horse country we got back on the Bourbon Trail!

Up next, Buffalo Trace in Lee's Town, Frankfort KY. I didn't realize but Buffalo Trace has only been named that since 1999 after being purchased by the Sazerac Company in 1992. Both Peychaud's and Reagan's bitters are made on-site today. The distillery has a long history as one of the oldest distilleries in the state, dating from the early 1800's, and a long roster of past owners whose names now grace many of the bottles; Blanton, E.H. Taylor, George T. Stagg, & Elmer T. Lee. 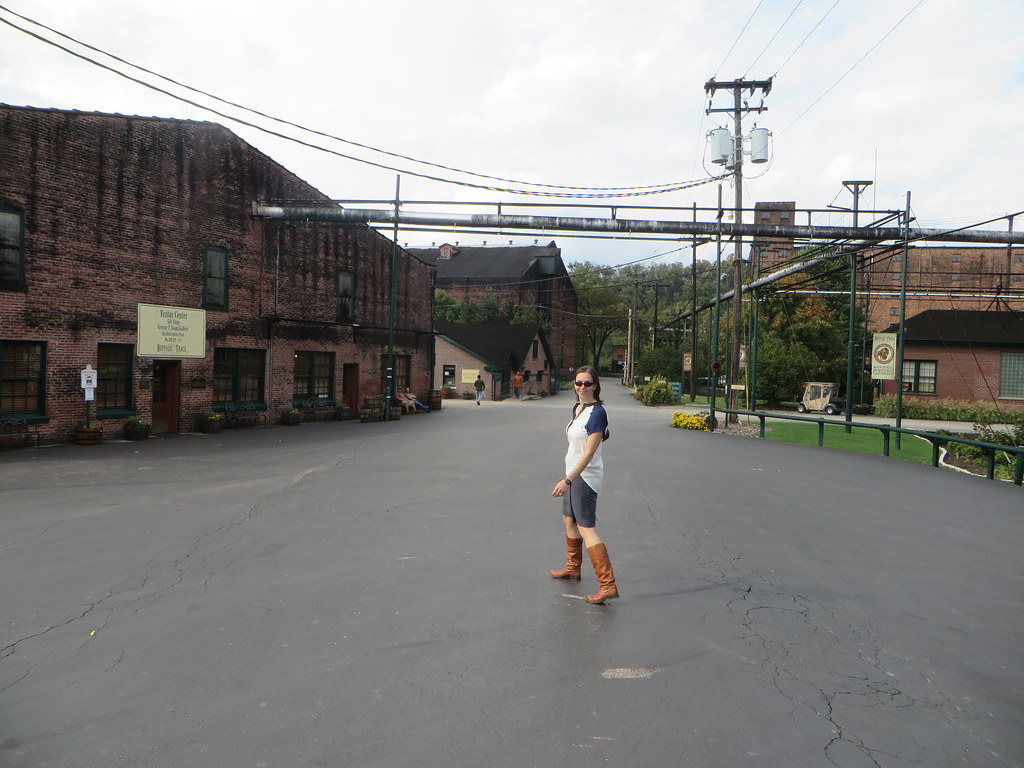 The distillery is it's own little brick and stone town, many of the original buildings are still used, with pipes of whiskey traversing the grounds.

The distillery, back then it was Schenley, was also one of only six allowed to continue during prohibition, making "prescription" whiskey. We had the good fortune of having Bob as our guide, who is also a state folklorist, as he had some really interesting information about the history of the company. 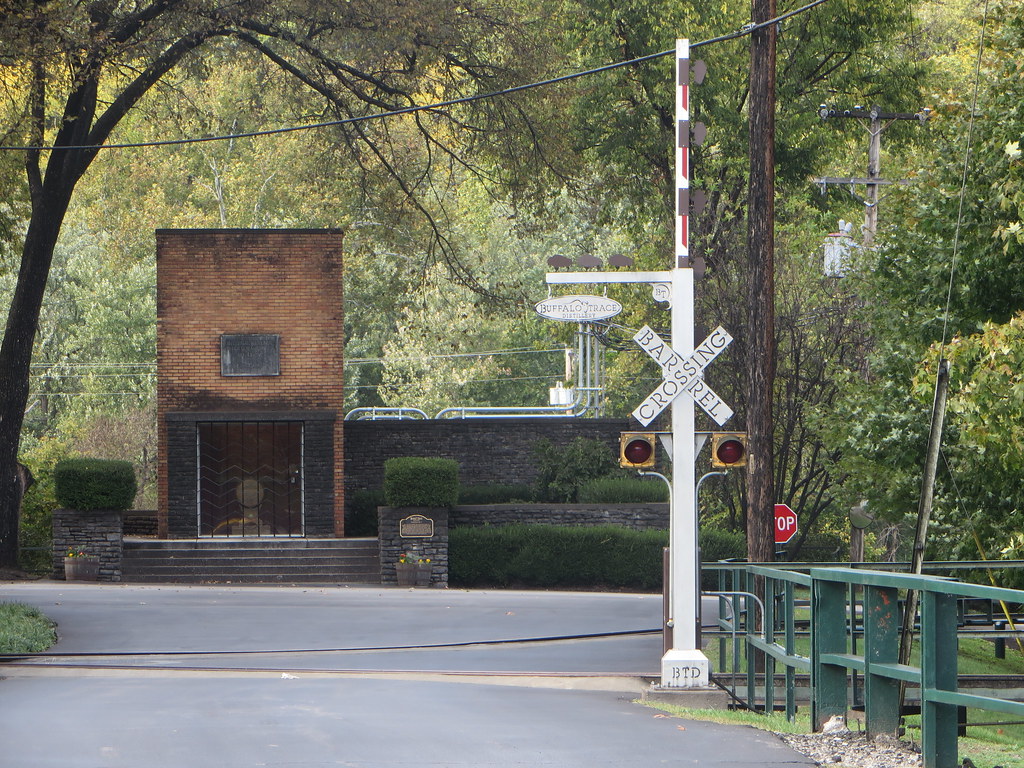 We chose the Trace Tour, a complimentary tour that starts every hour on the hour. Bob walked us past a few of the historic buildings as he shared information, we watched a short and interesting film, and then we were guided into one of the warehouses. This particular warehouse was aging W.L. Weller, which we learned can end up as the illustrious Pappy Van Winkle if the master distiller determines it to be special enough. 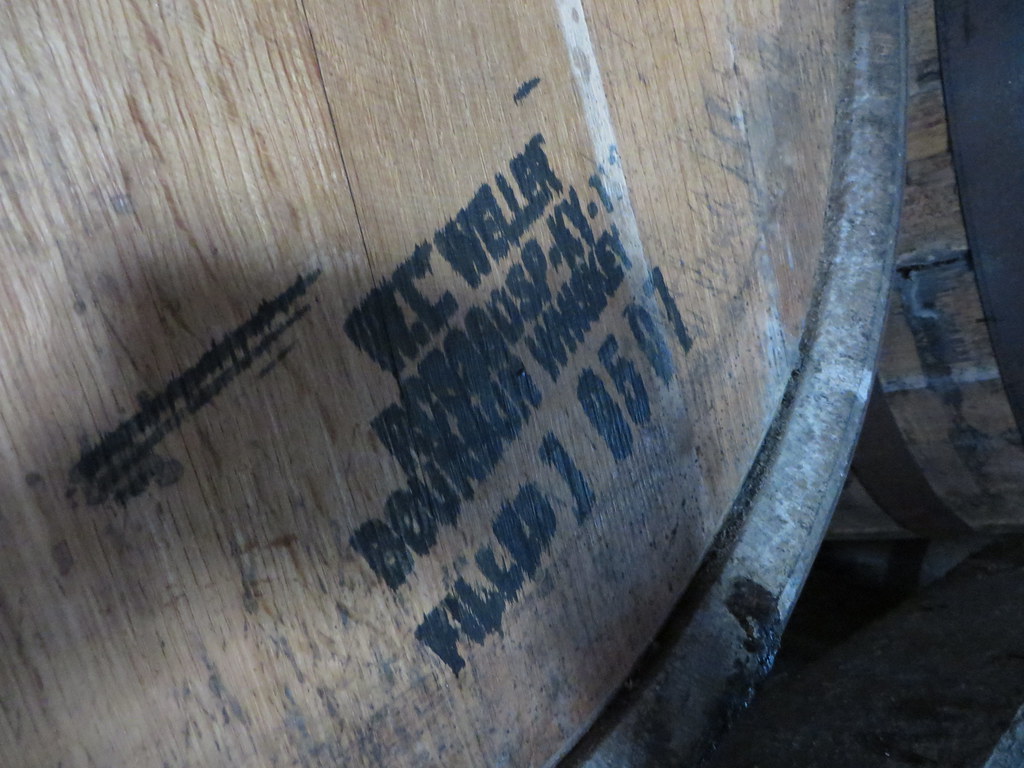 From there we made our way to Blanton's Bottling Hall. The day we visited they were bottling E.H. Taylor and Blanton's, on two separate belts, all completely by hand. It was really fantastic to watch, and everyone on the crew was super friendly and happy to answer questions and chat. Every single bottle is filled, sealed, labeled, and packaged entirely by hand. 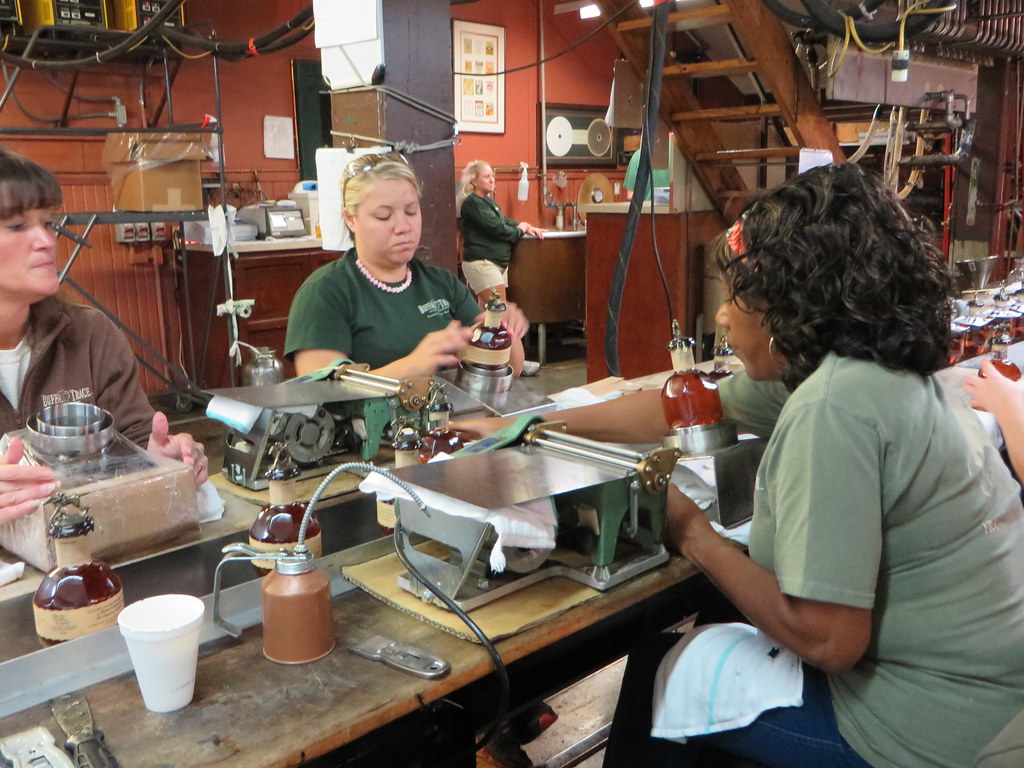 The guy putting the horse and rider corks in each bottle of Blanton's even went out of his way to find and give Elisabeth the first in the series, as the gift shop was out of them and E wanted one to complete her collection.

We finished up with a tasting and then spent a bit more time wandering the grounds on our own, they are really beautiful. 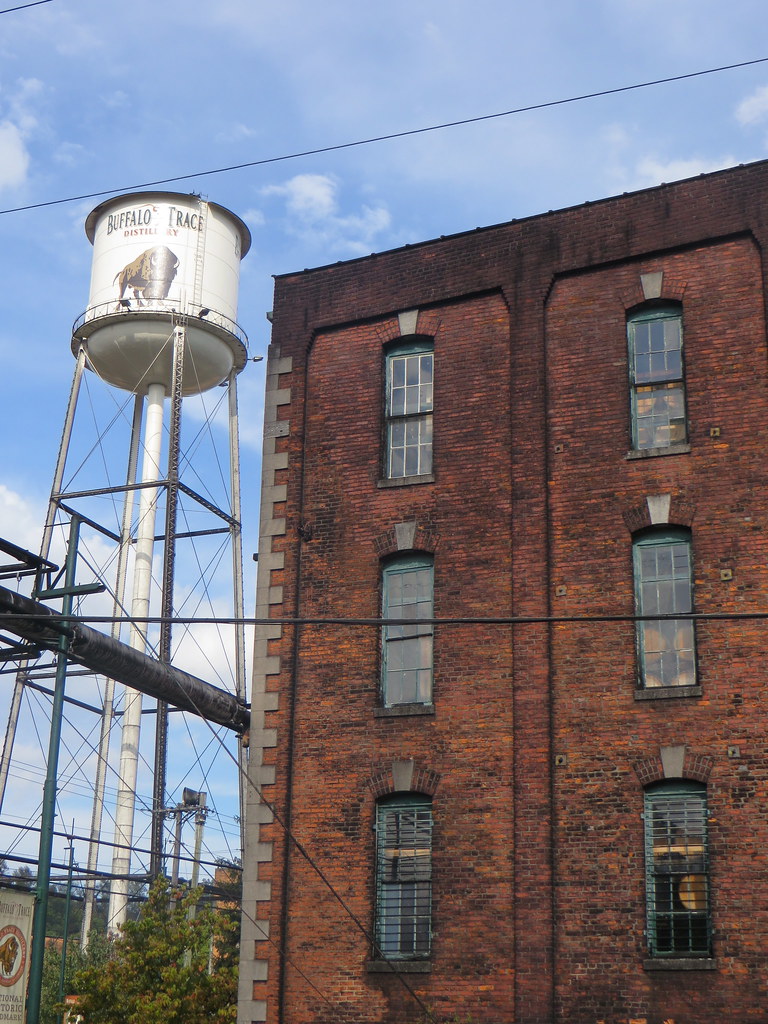 On the way home we stopped in at Liquor Barn, there are a few but we went to the one in Hamburg Pavillion. Now this retail emporium isn't actually on the Bourbon Trail, but it should be!

We had a great tasting of two of the Willett bourbons I'd wanted to sample, as well as these two rare Orphan Barrel bourbons. These are from defunct distilleries and are extremely limited in quantity so it was a good chance to try them. We were also told they've got their hands on a couple of bottles of Pappy which should be released in the next few weeks. 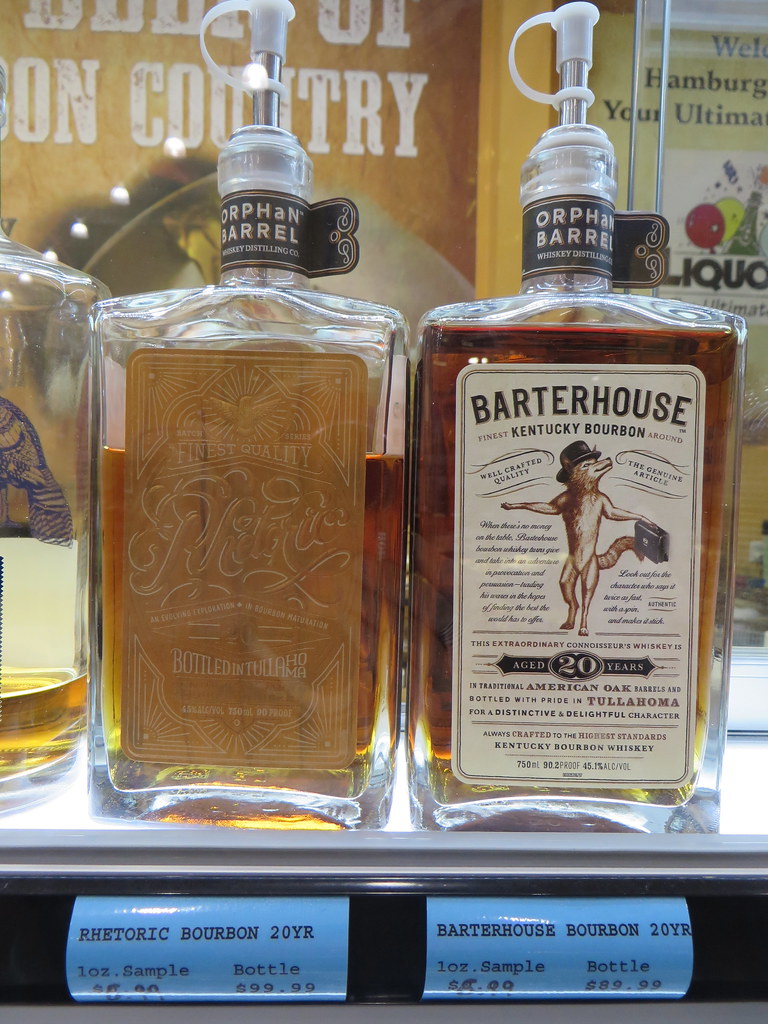 That night we conducted our own tasting thanks to the generosity of Jen's dads awesome liquor cabinet. And also he was asleep... 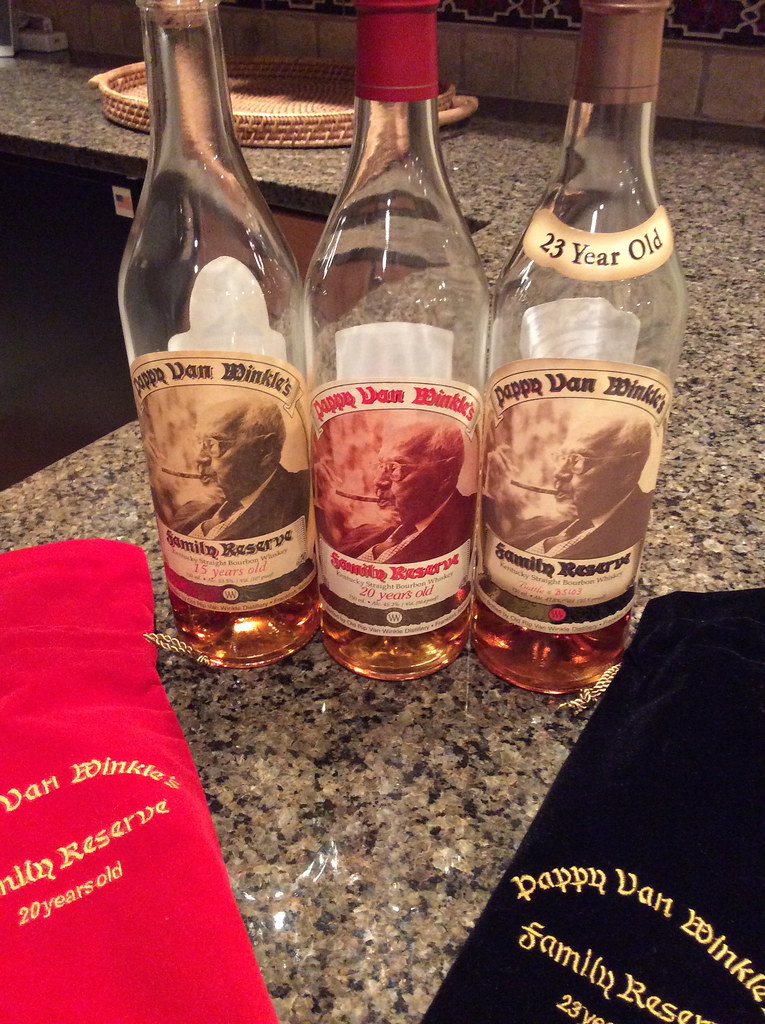 We fueled up for our last day of tasting by having ginormous and delicious Hot Brown's at Ramsey's Diner. A Hot Brown brunch is definitely the way to go!

Then we made our Woodford Reserve in Versailles, KY (pronounced completely different than you would in France!). Again the tours start on the hour every hour, but even on a rainy Tuesday afternoon we had to wait a full hour for the next available opening. Luckily they have a nice gift shop, a little cafe, and a comfortable lounge area complete with pretty fireplace. 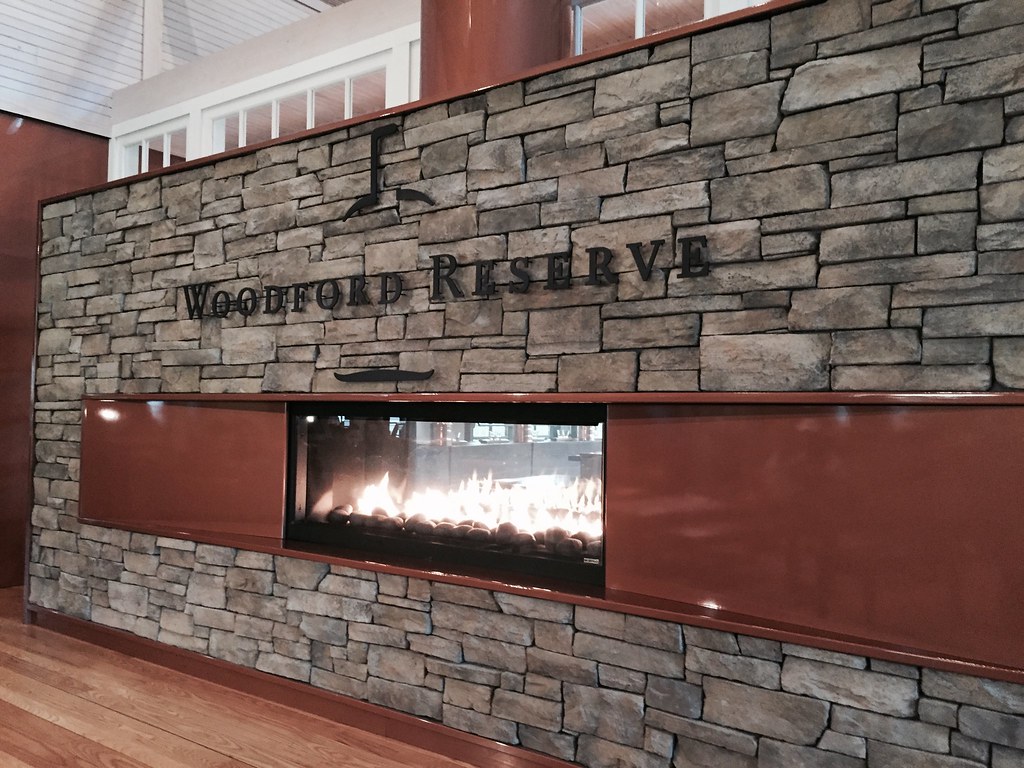 When our Bourbon Discovery tour started we were taken to check out the massive vats of mash first. Every distillery, even though they are all making up the same end product, has such different methods and esthetics, it's really interesting. Here we saw mash in varying stages of fermentation and even got a peek at the new tanks they are building. 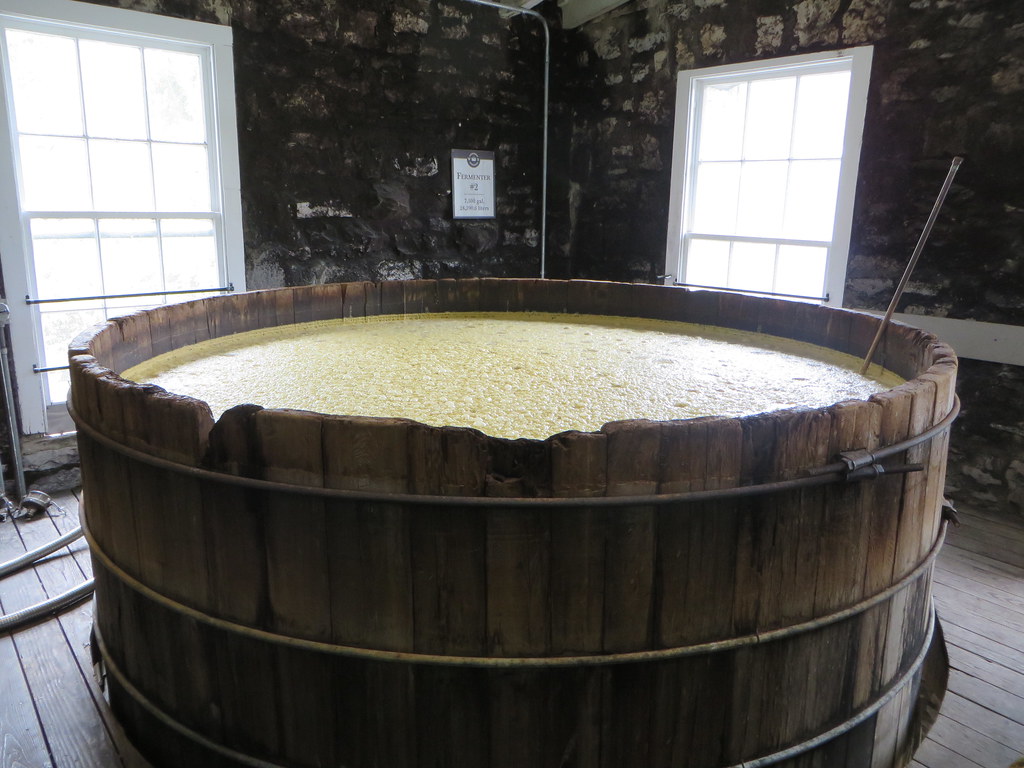 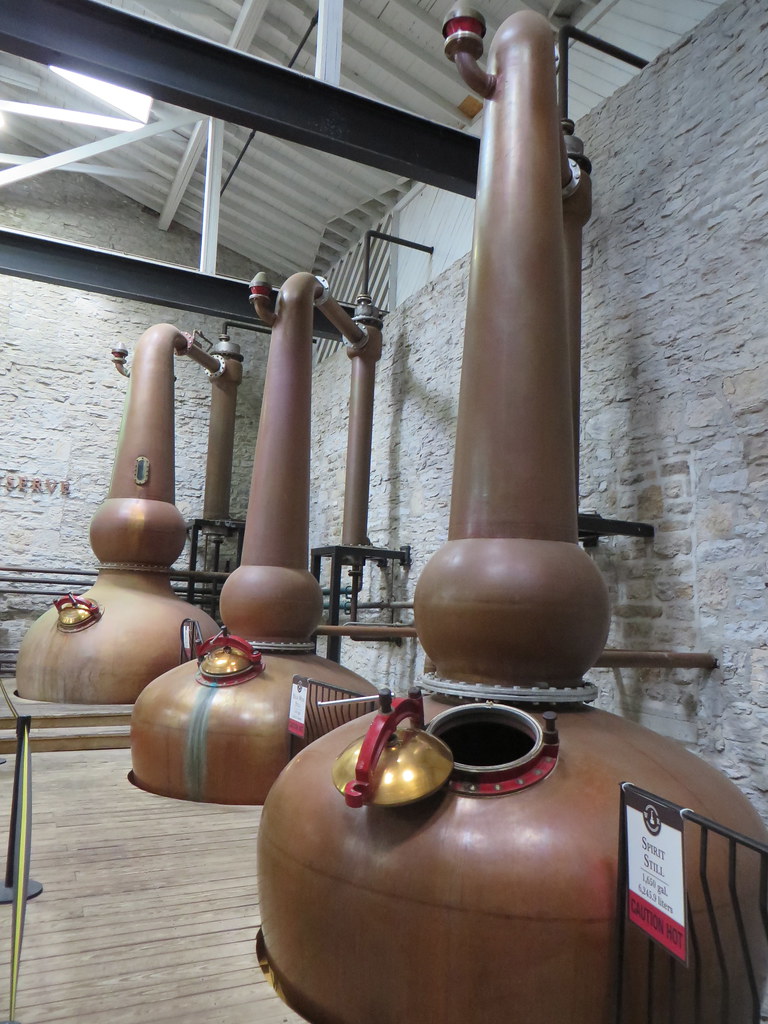 Those beauties were worth the price of the $10 admission alone. We also surprisingly learned that not all Woodford bourbon is actually distilled here, that some comes from their location near Louisville. But I don't know how well informed our guide was, she was the least favorite of ours at all the distilleries and didn't seem to have a lot of in-depth knowledge.

Woodford has a unique barrel track which takes the barrels from the filling room and rolls them along to the warehouse. We followed their path to warehouse C, originally built back in 1890. 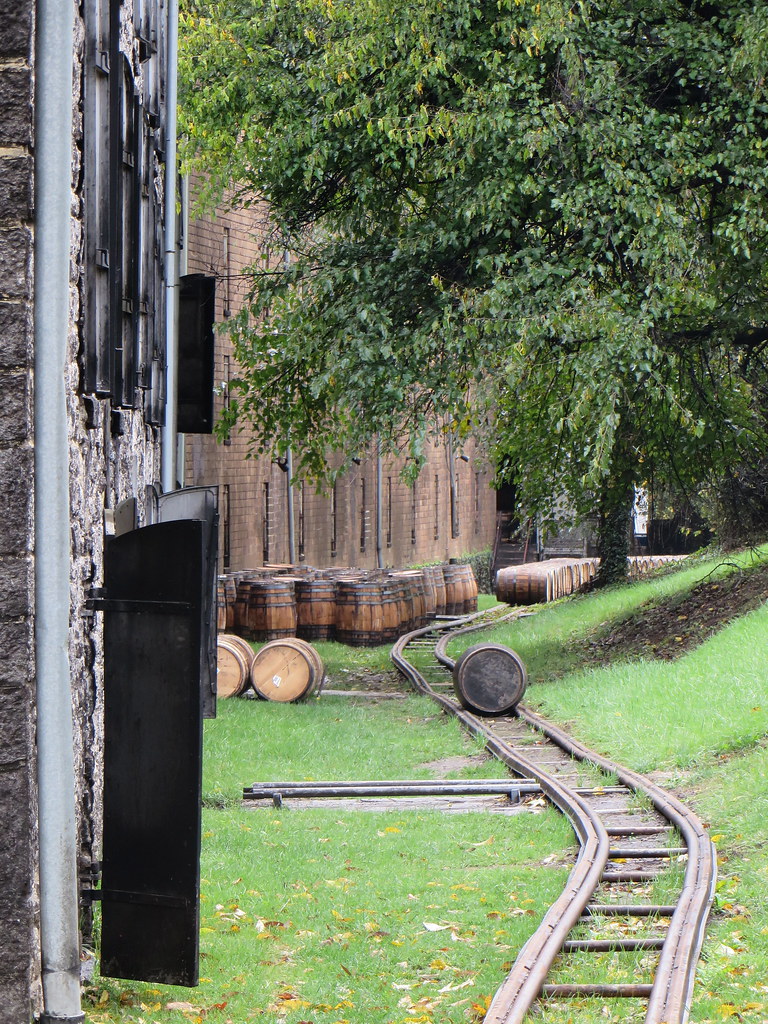 Here we entered the warehouse, which is directly connected to the bottling house, and learned a bit about how they store and age their whiskeys. And thanks to Jen's moms keen eye, we also learned they'll be releasing a rye next year! 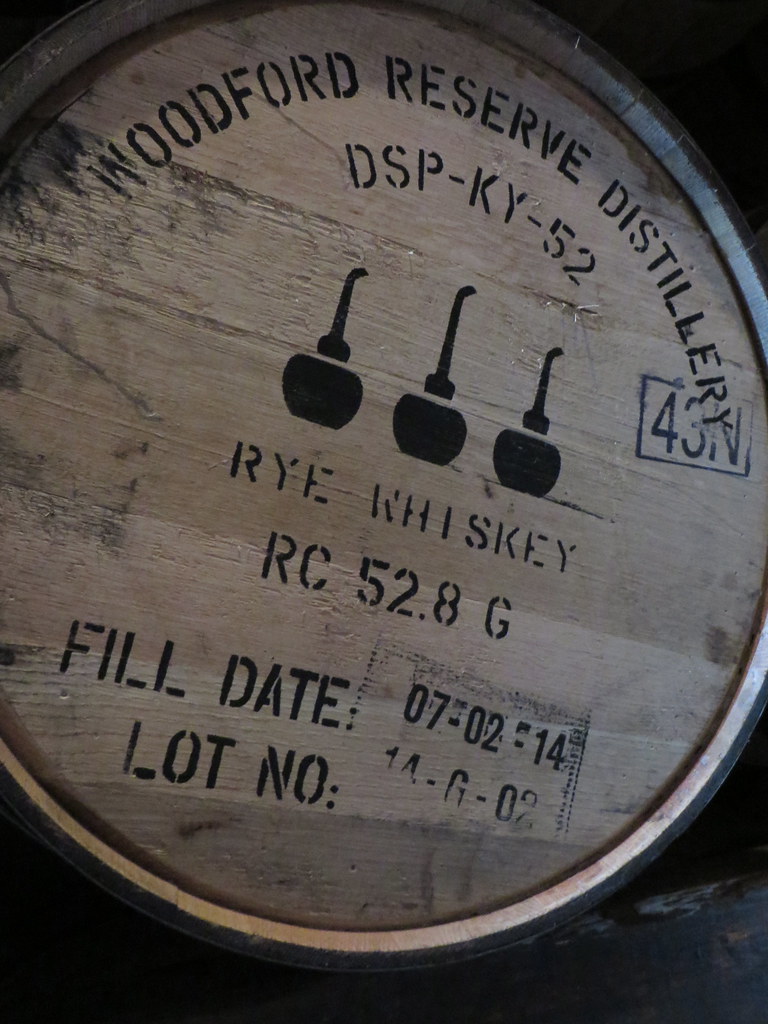 After following the rolling barrels into the bottling room and seeing where they dump the bourbon, fill and box up the bottles, we returned to the main house and its tasting room. It's a new facility and decked out all in wood and copper. We tasted the Woodford Reserve and the Double Oaked side by side and enjoyed a bourbon ball before heading out to our last stop of the day. 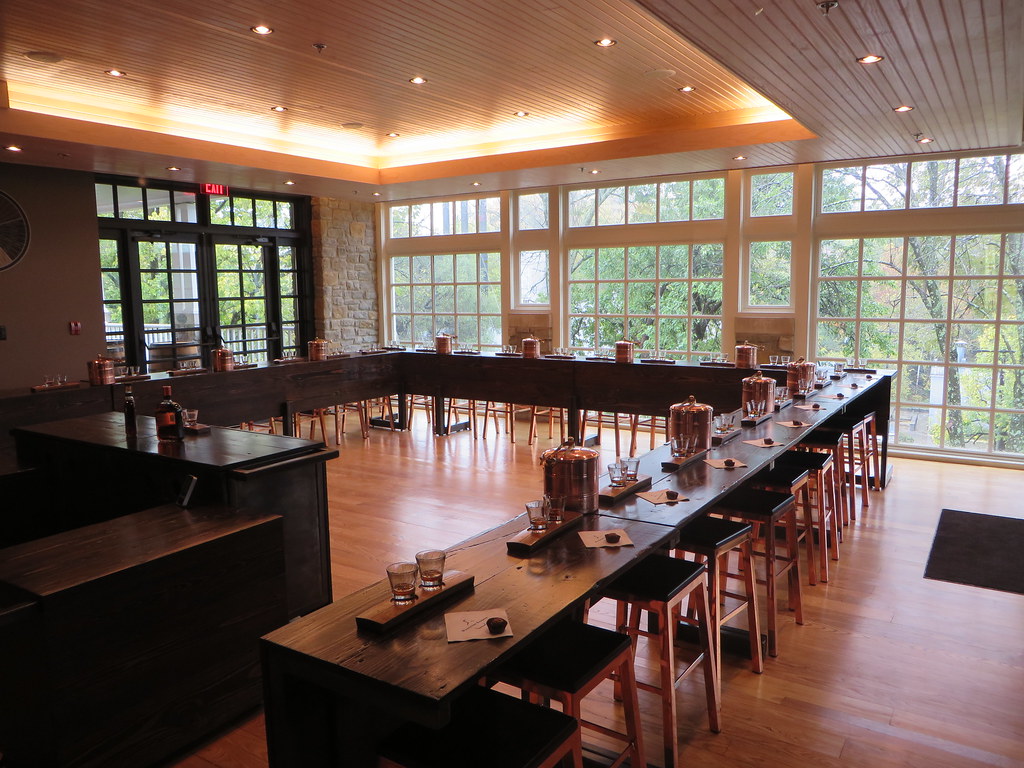 With a plane to catch in just over 2 hours we had no time for a tour but we hit the gift shop at Four Roses to peruse what they might only be selling at the distillery. 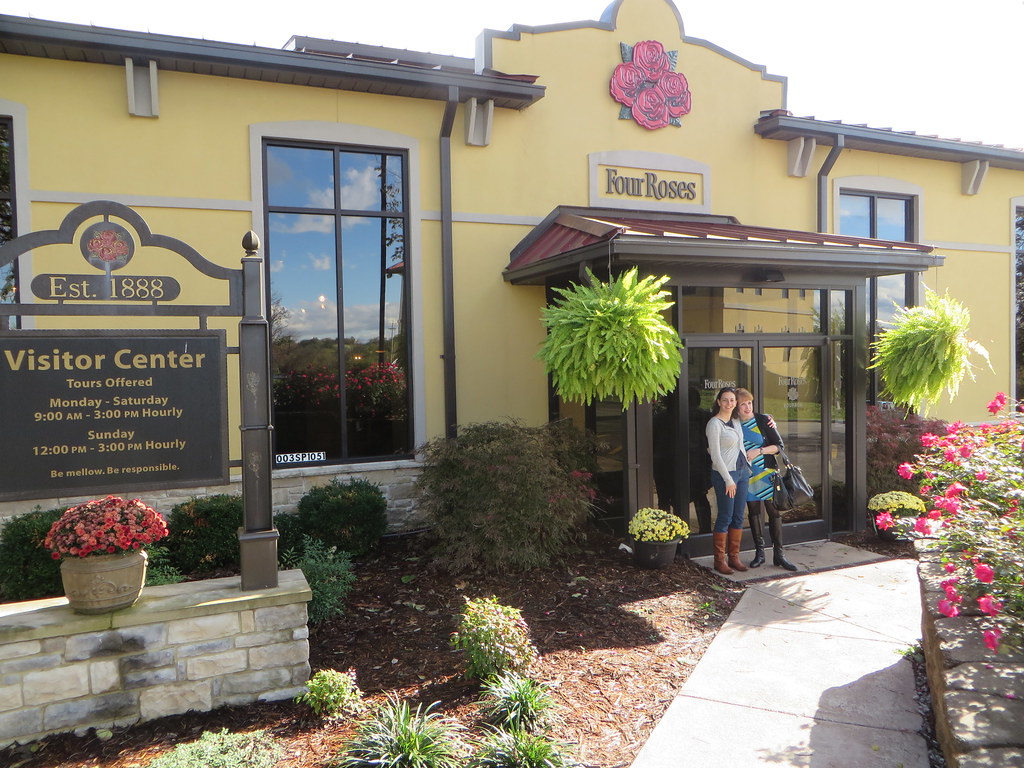 We found their Private Selection series, three different recipes to choose from, and bought a couple to bring home. The grounds here are very different from the others in that there is a Spanish feeling, I'd love to come back and tour around.

But for this time I'd say that hitting six distilleries over three days was a mighty fine effort! Until next time Kentucky! 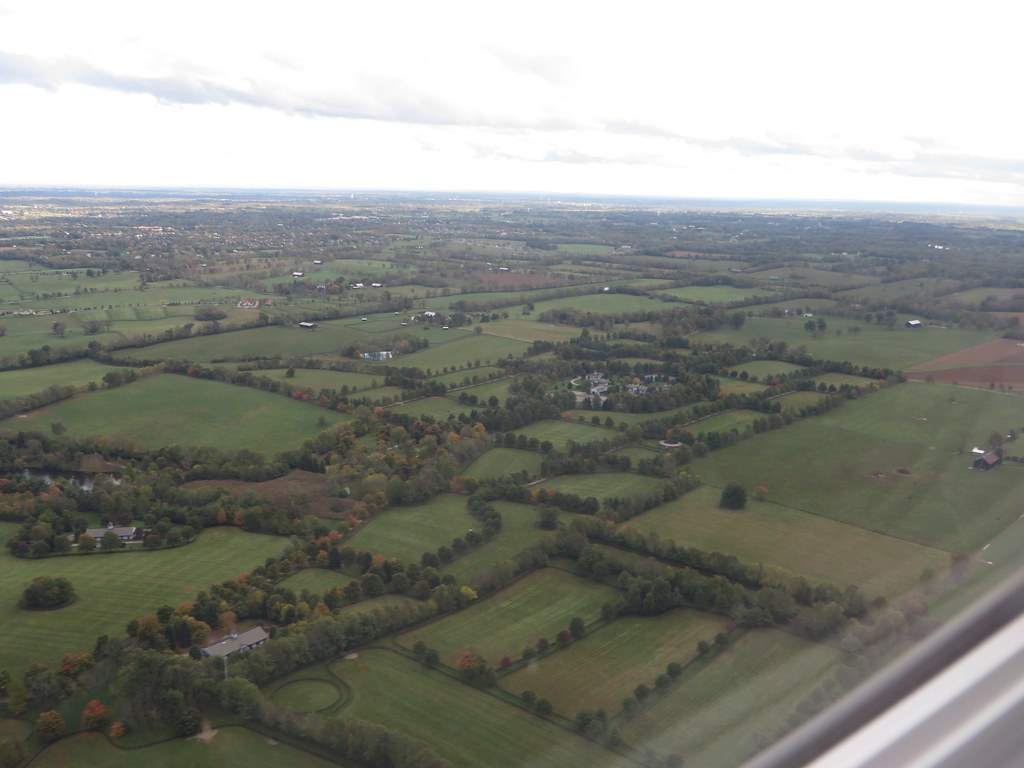