With COVID making international travel difficult, and I haven't been ready to do any long haul flights yet, I've been doing some road trips around the PNW. Which, let's be honest, is an amazing place to be able to explore!

I've lived in Washington State since about 1975 and I had never been to Mount St. Helens. I had however experienced first hand the eruption of the volcano on Sunday May 18, 1980, which also happened to be my dad's birthday. I was outside riding my bike with friends in Spokane Valley where I lived at the time, and we were all called home. The sky was growing dark even though it was only around noon. I don't remember if my mom told me a volcano had erupted and we had to stay inside or not. But I do remember having to stay in the house for days, school was cancelled and our entire street was blanketed in dirty toxic ash. I was pretty obsessed with this occurrence for most of my childhood and collected zip lock bags filled with ash. 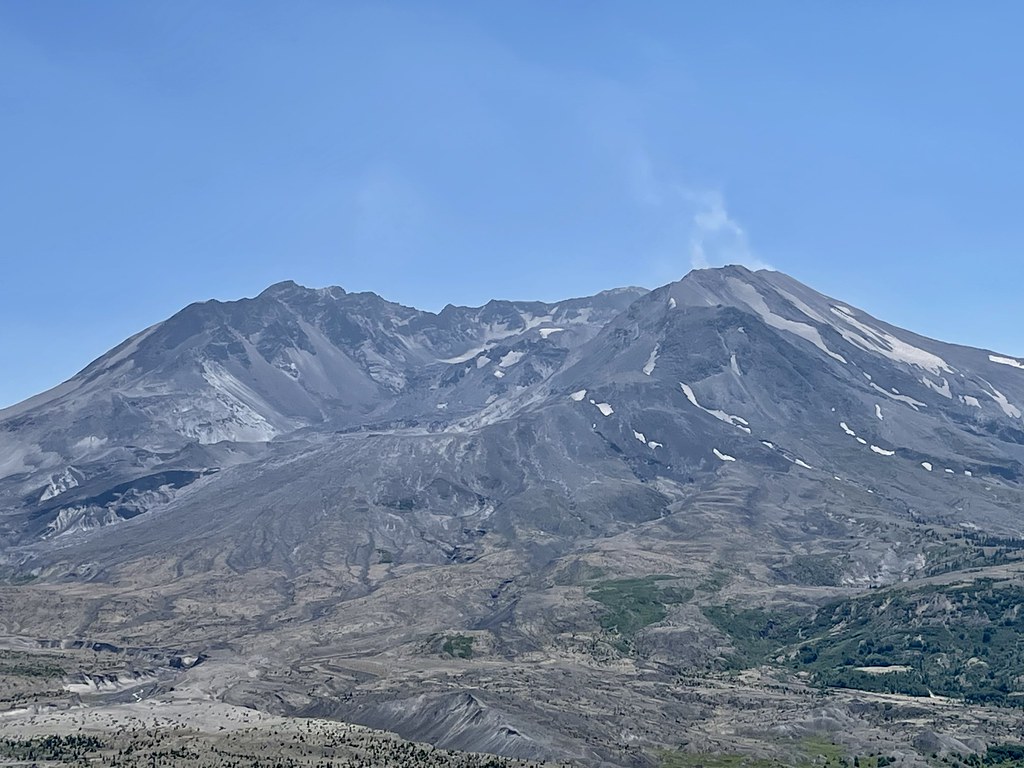 So it seems weird that I had never been, but it's a 6-hour round trip drive and that just makes for a very long day trip. Cue pandemic and also working virtually...
I rented a very cute lakefront cabin via Airbnb right on the shore of Lake Tanwax. I drove down late in the afternoon on a Wednesday and stopped in Tacoma at Southern Kitchen to pick up takeout dinner- fried chicken, mac & cheese, cornbread stuffing, and cornmeal pancake. To be clear, I didn't actually order all of that but that is what they gave me! 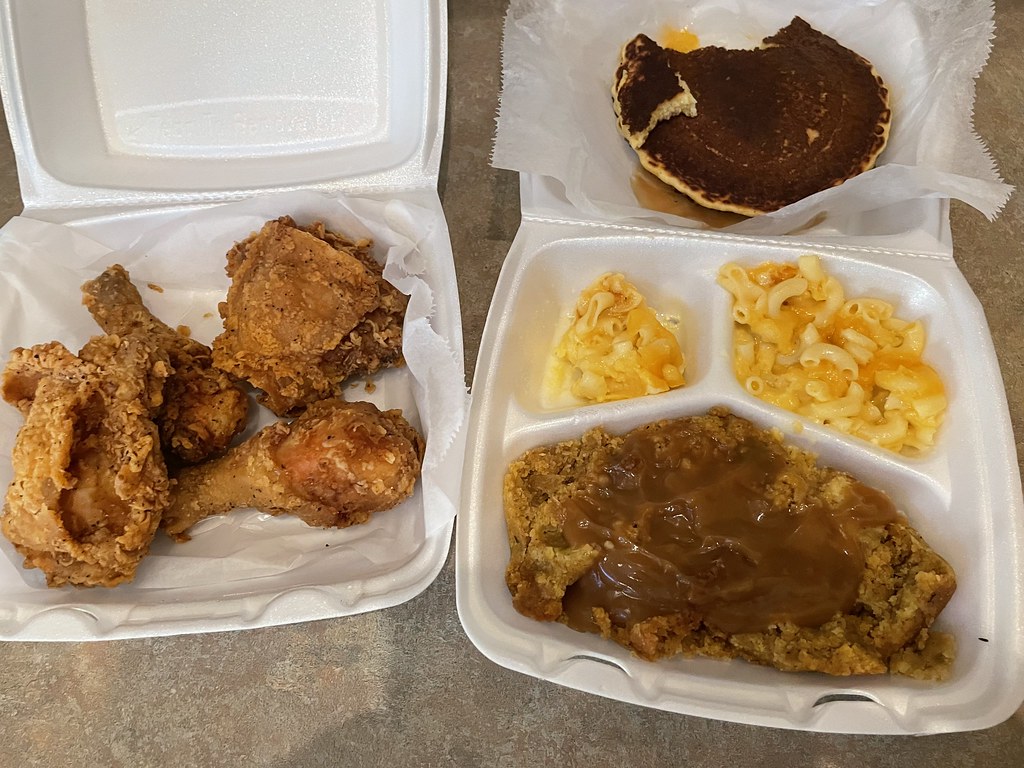 Of everything I had I really liked the fried chicken and the cornmeal pancake. I could have used a green salad though!!
It was such a gorgeous evening when I arrived. I made a cocktail and sat outside with my book and this awesome view! And when it got dark there were sooooo many stars!! 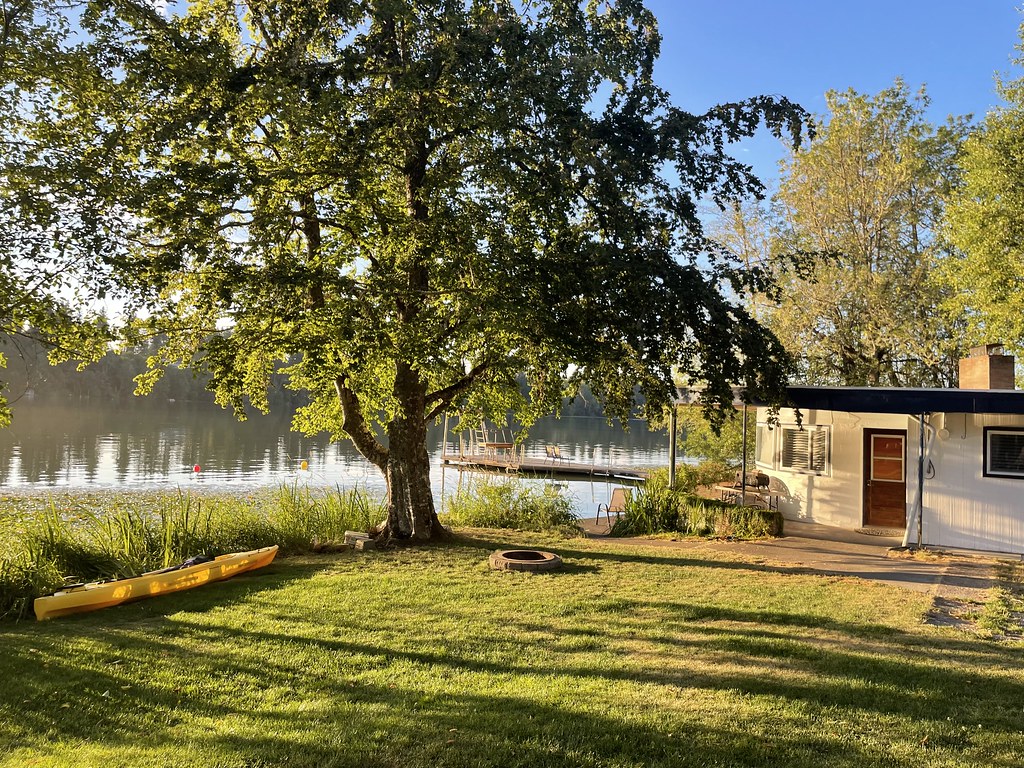 The next morning I did some work outside while having coffee and breakfast; it was an absolutely beautiful day. I was excited to get on the road and start exploring. 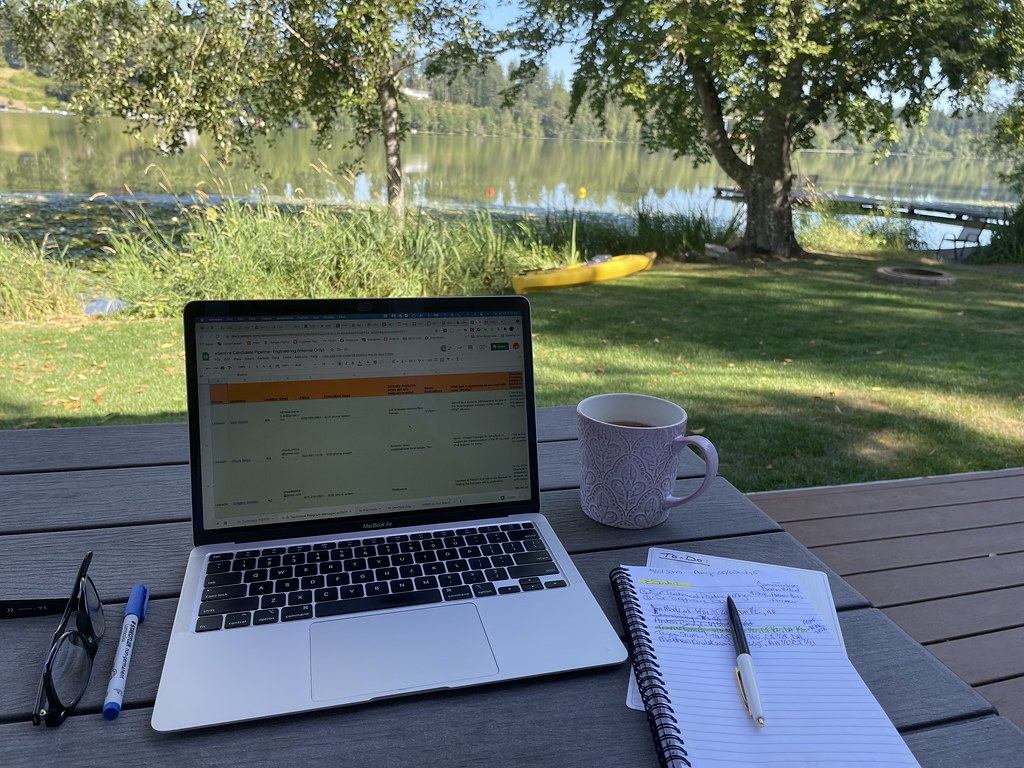 It was a 2 ½ hour drive to Mount St Helens, so still a big round trip, but I would be stopping at Mount Rainier the next day so was making the most of it. It would be pretty much impossible for me to do both of those in a day trip from Seattle.
The day was really heating up, by the time I got to Toledo, the self-proclaimed "Gateway to Mount St Helens" it was already 80F. 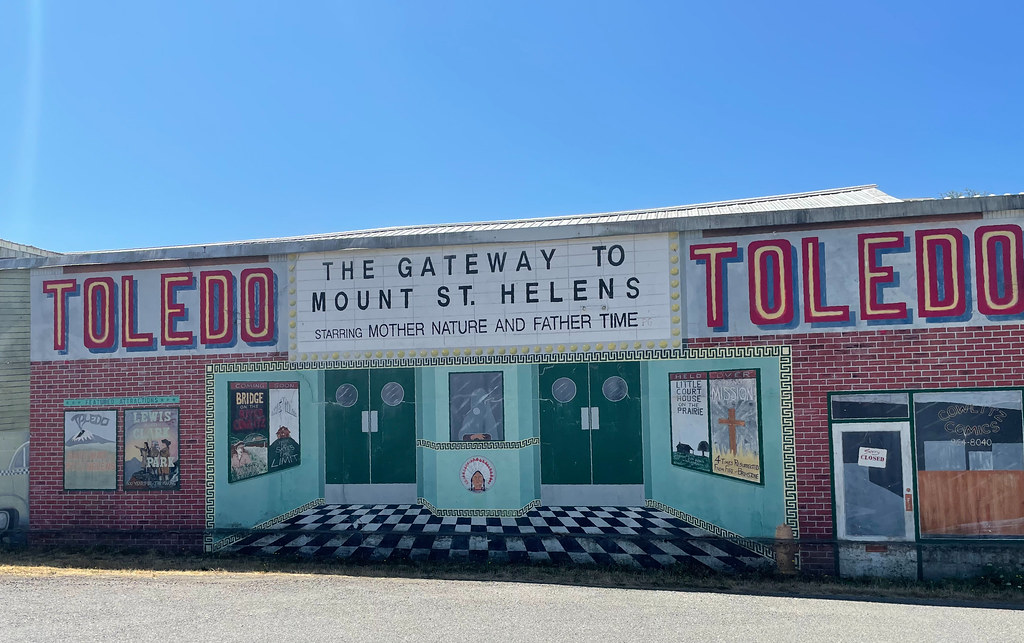 There was little traffic on the drive up to the mountain. I stopped at a few viewpoints, the mountain was completely visible which was great as many friends had warned me that sometimes you get all the way out there and it is socked in.
One of my stops was at the western edge of the blast zone, it was pretty cool to see an area which had 150,000 acres reduced to basically nothing during the eruption, now covered in forest. 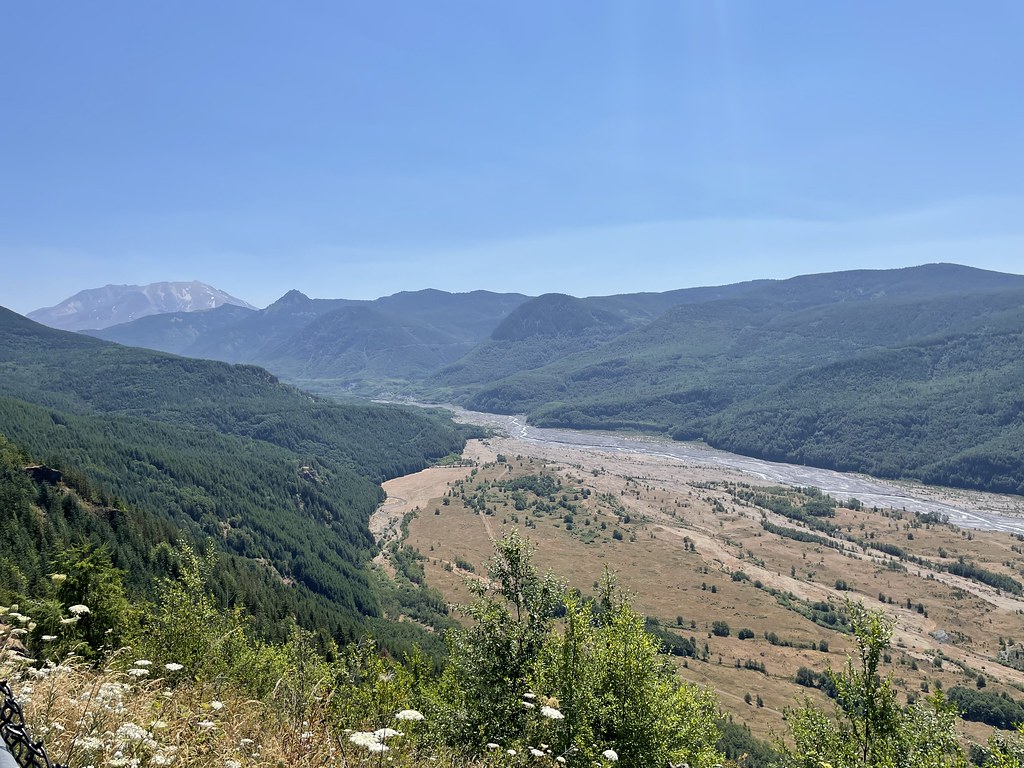 At the Johnston Observatory the exhibits inside were closed because of COVID but the restrooms were open. There was also a food truck set up in the parking lot.
My plan had been to hike the Boundary Ridge trail out towards Harry's Ridge, it's an out and back and I had planned to hike about 6 miles total. You start at the Observatory where there is a ½ mile loop with excellent views as well as some informational plaques. 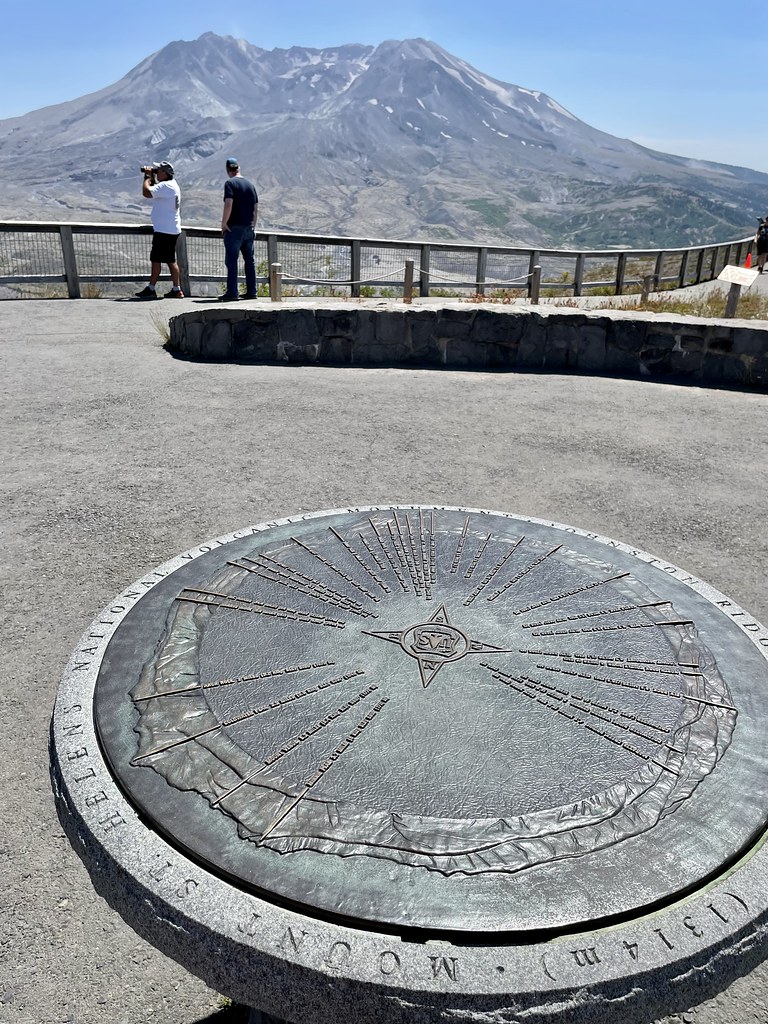 The Boundary Trail was dry and dusty, the only shade came from brush that was about as tall as me and only here and there. I had plenty of water, sunscreen and a hat but even at 4,314 feet elevation it was over 90F! 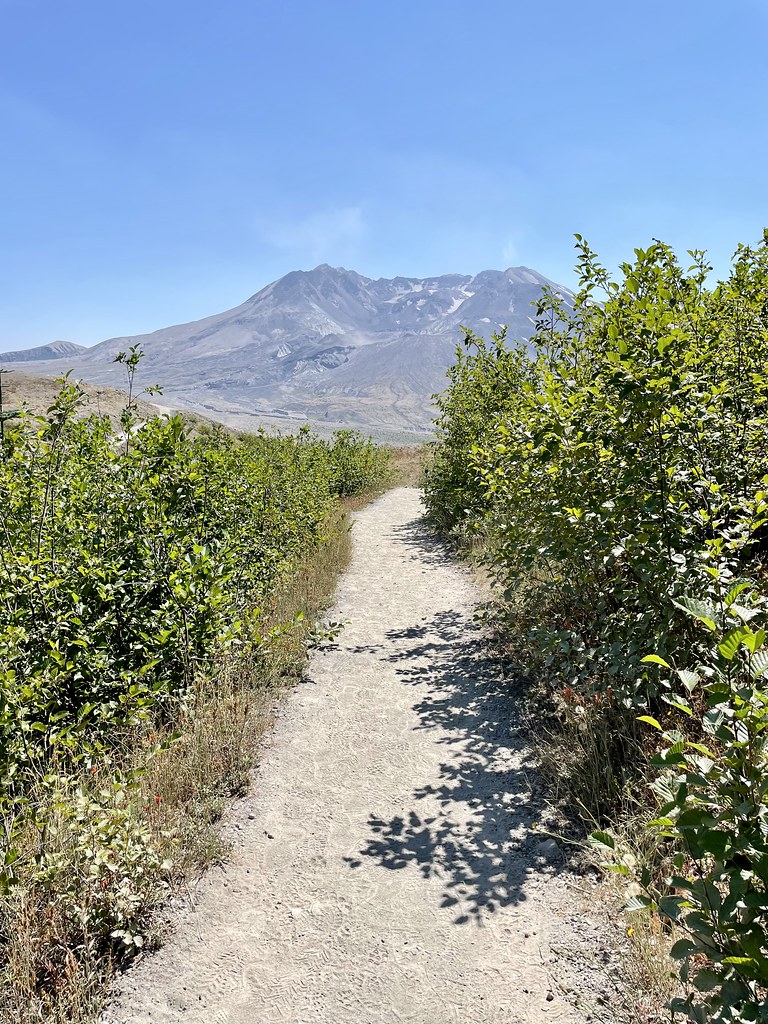 You are looking right at the mountain pretty much the entire time on the trail. It was a little surreal! I also was so surprised to see zero snow on or inside the crater. And there was a bit of wind up at the peak which was stirring up dust, making it look like the crater was smoking!
I caught glimpses of Spirit Lake off in the distance and really wanted to make it out to the ridge for a better view but after only 2 miles I was so overheated I had to turn back. I finally sat on the ground at a trail marker, the only shade around. And then nearer the Observatory I sat under a lone tree for a bit. 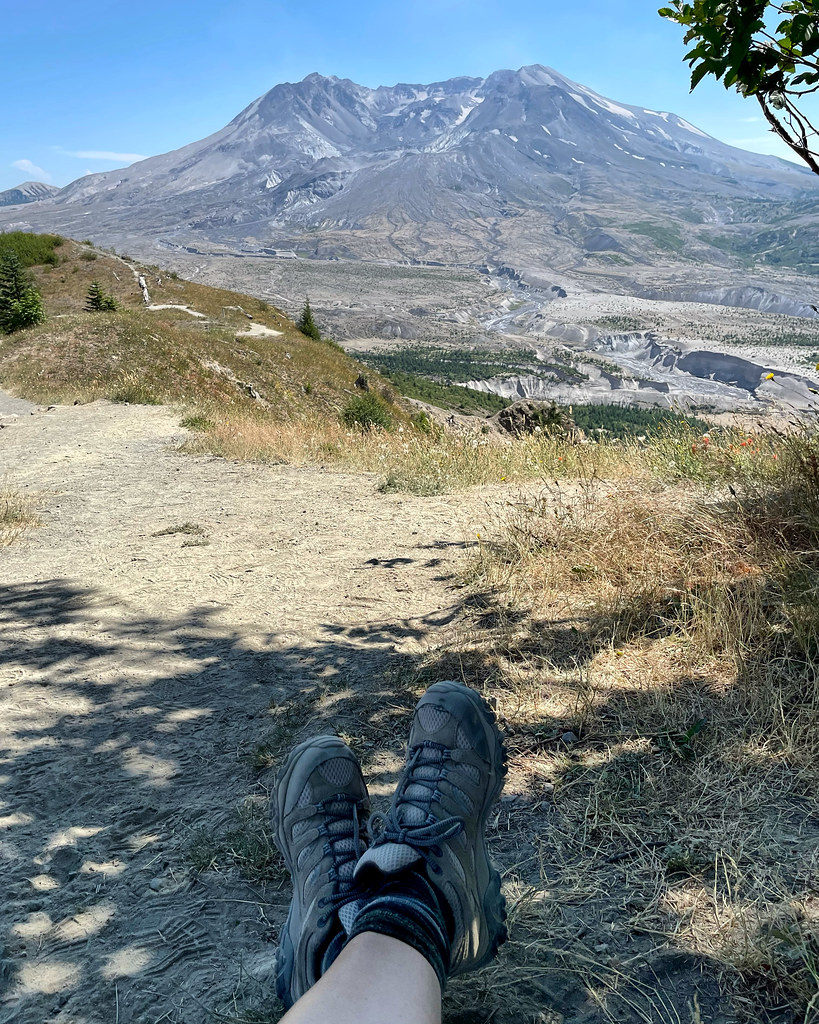 It was a long drive home and I honestly didn't feel good. I had lots of water with me but I could tell I had a slight case of heat exhaustion. I stopped in Elbe and picked up a burger at the Elbe Tavern (it was good!) and headed back to Lake Tanwax.
That evening the power went out on the entire lake. It was so dark and still, and HOT without a fan. But I was exhausted so went to bed early and the next morning the power was back and it was another gorgeous day. And hot.
I finished off the cold fried chicken for breakfast along with some coffee while working out on the patio table. Then I packed up and started my drive to Mount Rainier. It was about 1 ½ hours to the Naches Peak Loop trailhead. 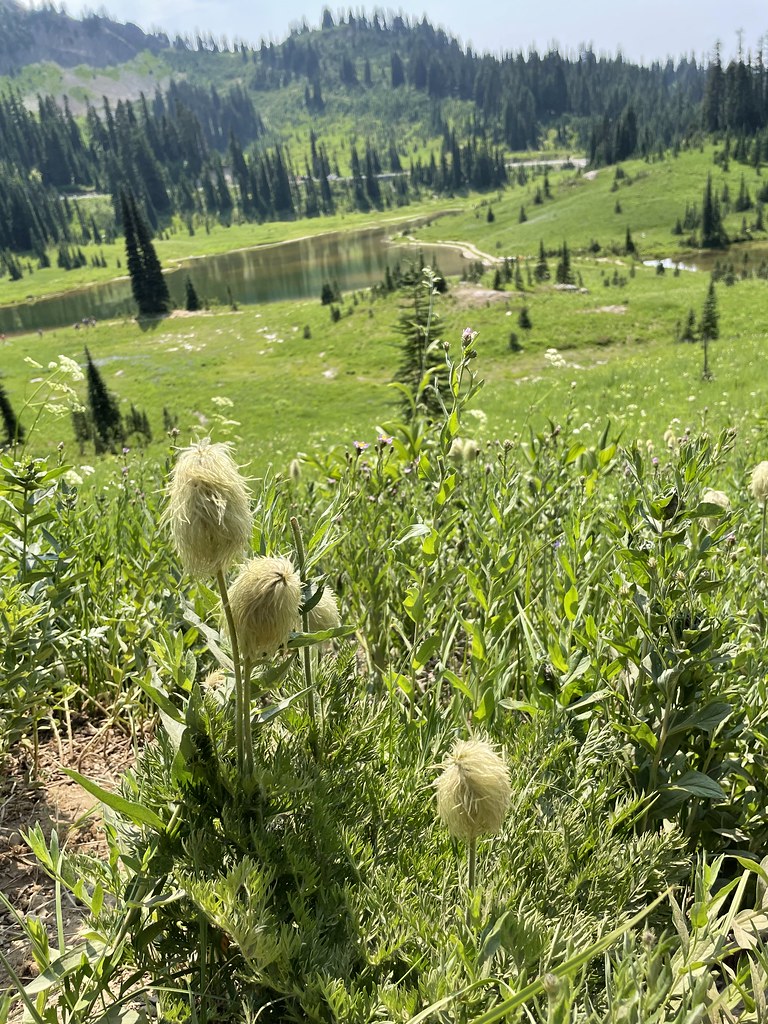 I'd never been on this trail and unlike the day before on St Helen's the green and lush fields were so pretty and inviting! I had also never been on Rainier during wildflower season and was just amazed at all these little flowers!
Starting from the parking lot and facing Lake Tipsoo I started the 3.7 mile hike heading left up the trail and heading clockwise. I recommend this direction as you will have the mountain in your face for the whole last part of the hike. It also seemed a bit less hilly this way. 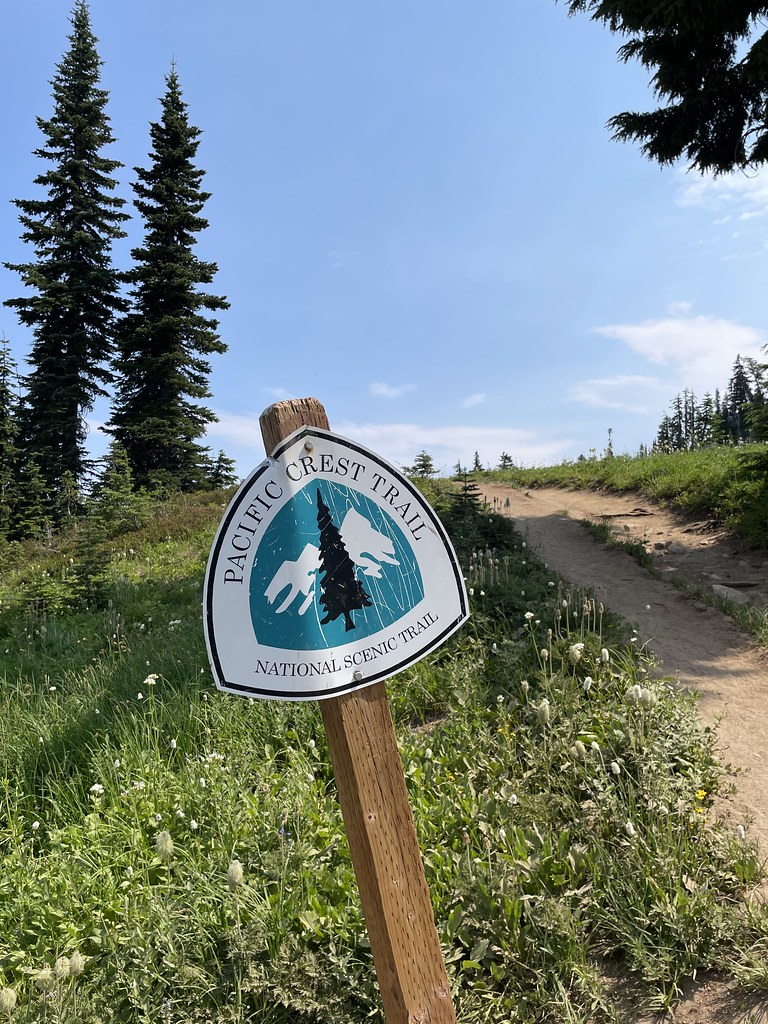 The hike intersects with the Pacific Coast Trail for about ½ of it. I mean that is as close to hiking the PCT as I will get so that was quite fun!
It's little wonder why this trail is so popular, it is just gorgeous! Meadows, lakes, mountain views... it has it all! 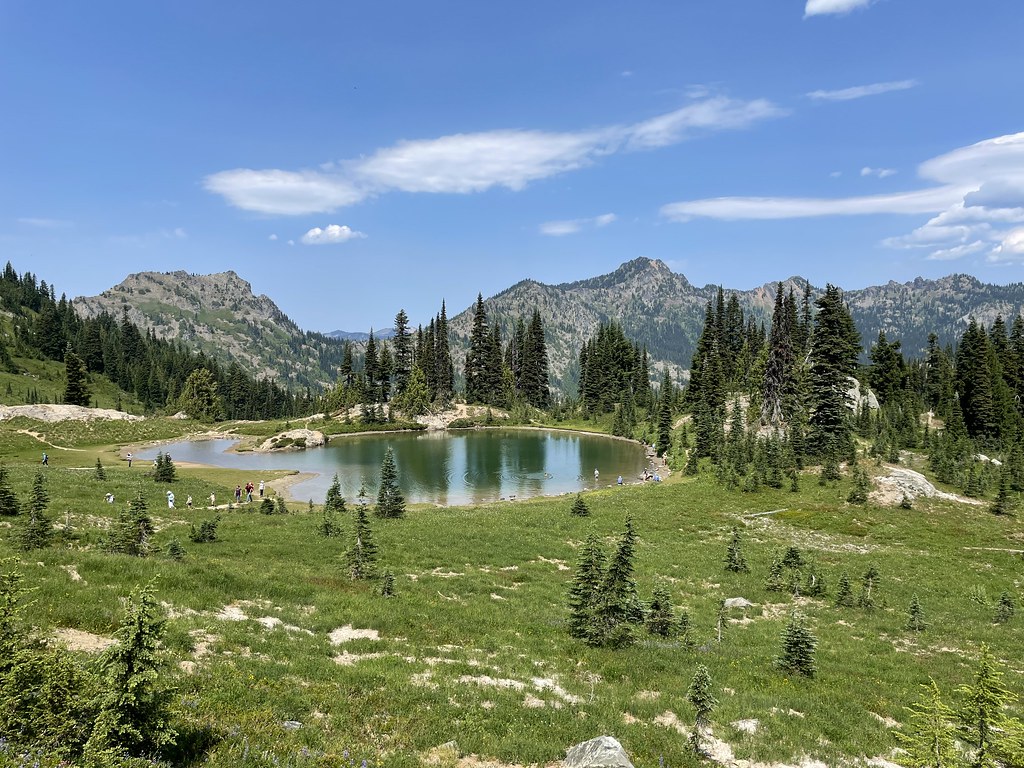 Even at 5,500 feet elevation it was hot, almost 80F. And after my heat exhaustion the day before I was trekking pretty slowly. I took about 2 ½ hours and stopped for a snack along the way. 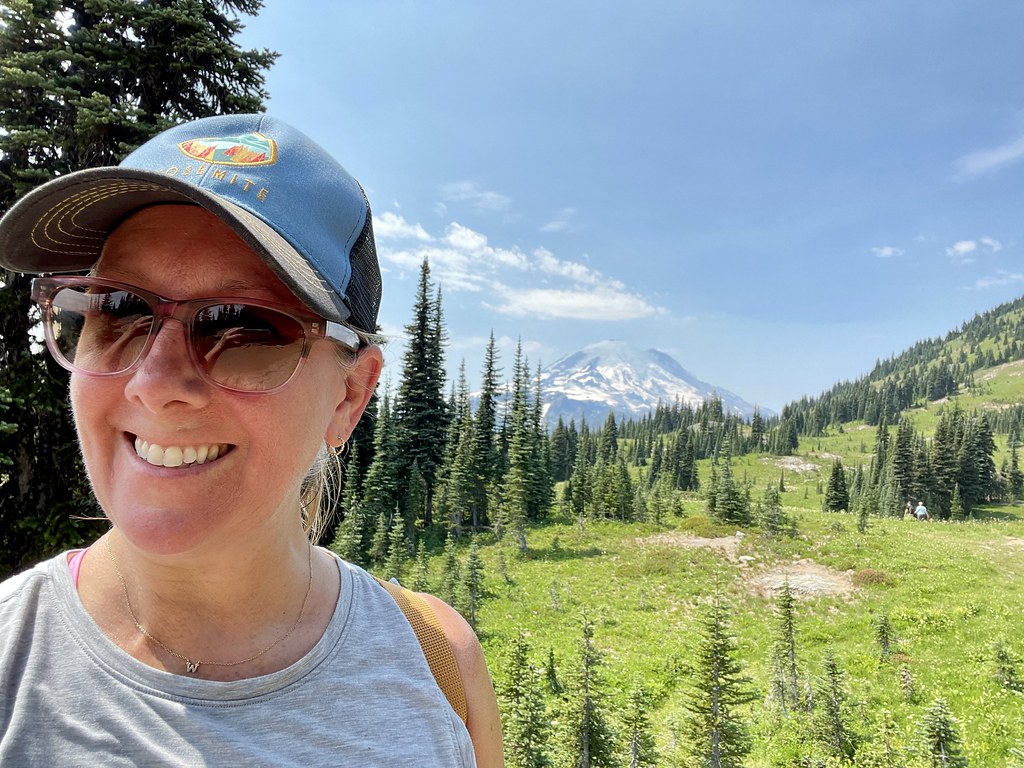 At about the halfway part Mt. Rainier makes her appearance and stays there for pretty much the rest of the hike. It is soooo stunning, even for someone who can see it from her bedroom. The view of that mountain just never gets old to me. 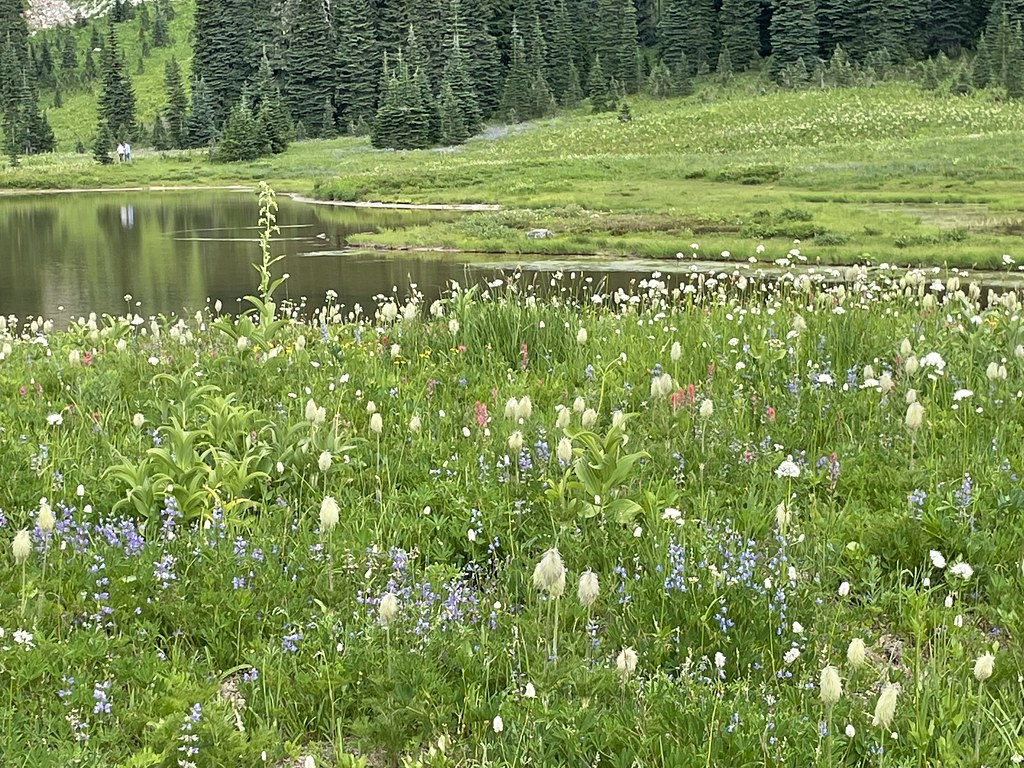 Finishing back in the meadow completely blanketed with wildflowers was fantastic as I was a bit tuckered out!
Hiking on two different volcanoes in the course of two days is certainly something I think might be only done in the PNW!
All photos of Mount St. Helens and Mount Rainier here.