Before a girl's hiking trip in the Swiss Alps, I spent an awesome long weekend in Paris. Paris is always great, and it's always my favorite, but this time I got to see a lot of people I don't normally see, so it was even better! Not to mention tasty!

I flew coach on Icelandair SEA->KEF->CDG. I was given a blanket and pillows (so nice & rarely done now!) and I was able to buy wifi using my Sega points. They sold Nicolas Feuillatte champagne and had some ok seatback entertainment. Not bad I'd say (although seating was a bit tight as the flight was full). 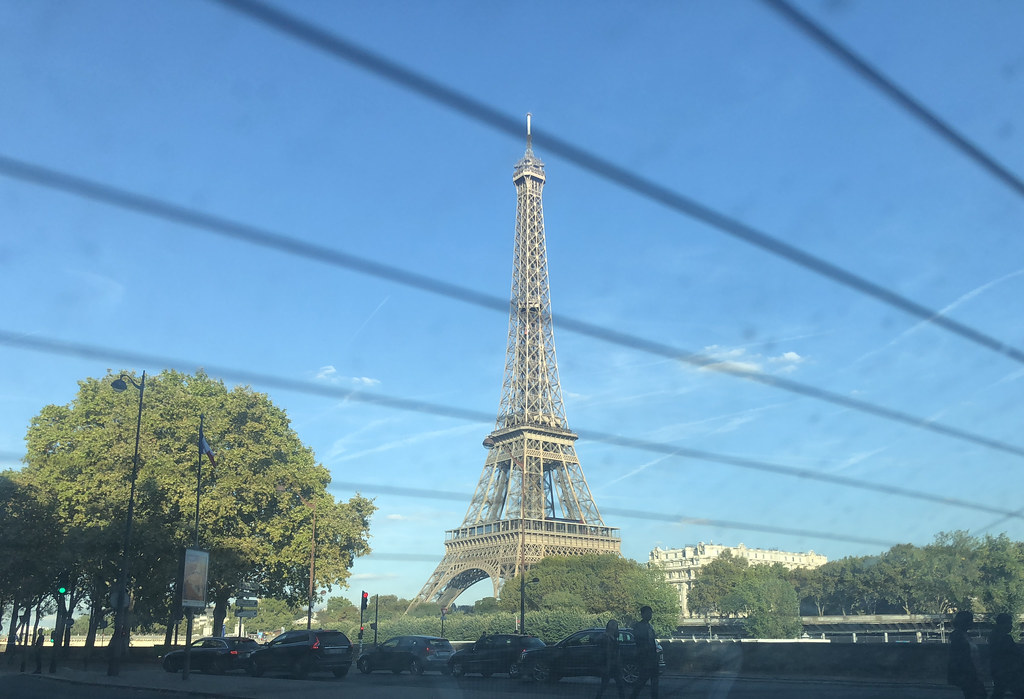 As with a previous visit, I opted to take the €55 flat rate taxi to my friend's apartment in the 15th as it was mid-day, traffic was light, and I was ready to take a nap!

That Friday night was a bit of a whirlwind, as it usually is in Paris. Forest and I had plans to get to the newest of Yves Camdeborde’s wine bars, L'Avant Comptoir du Marche in the Saint Germain area. I've raved about Camdeborde's wine bars and restaurants for years and continue to love the concept and the food. 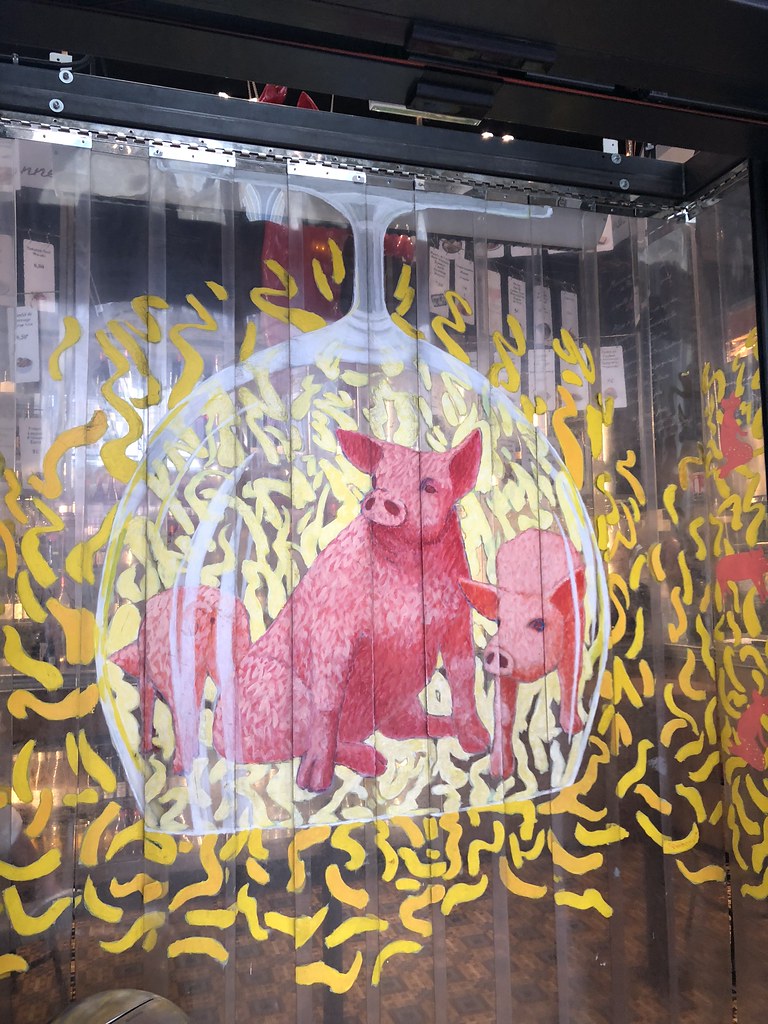 As I was getting ready to meet Forest I had a text from my friend Beth, seems she was in town from Chicago and saw an IG post of mine mentioning I was heading to Paris. Small worlds... She met Forest and I and we all really liked Marché. The focus at this newest bar of his is all about pork. There are more tables with stools than at the others as well, and even some outside seating. Get the croquettes! 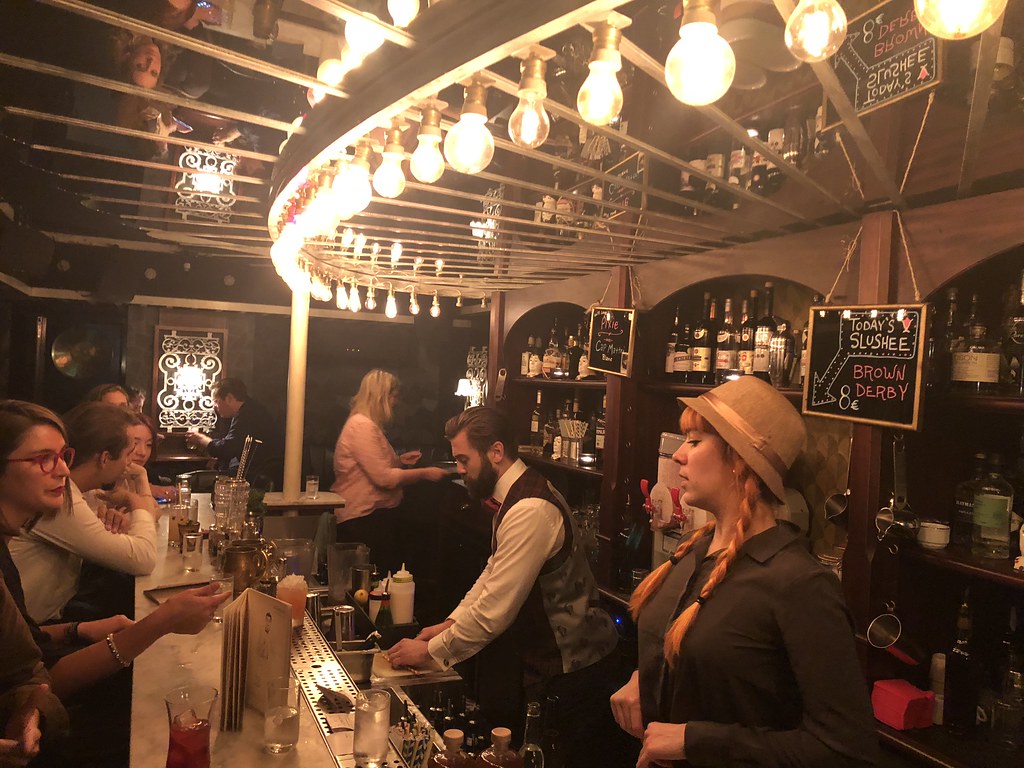 Forest had been invited to the cocktail bar Lulu White's new menu release, so after a few bites we headed to Pigalle. Upon entering the bar we felt like we were in New Orleans! It was a great time checking out the menu and fun to catch up with Beth. Before long our friends Matt & Vio joined as well! Beth had an early flight the next day so we said goodbye and then the 4 of us headed to Golden Promise. 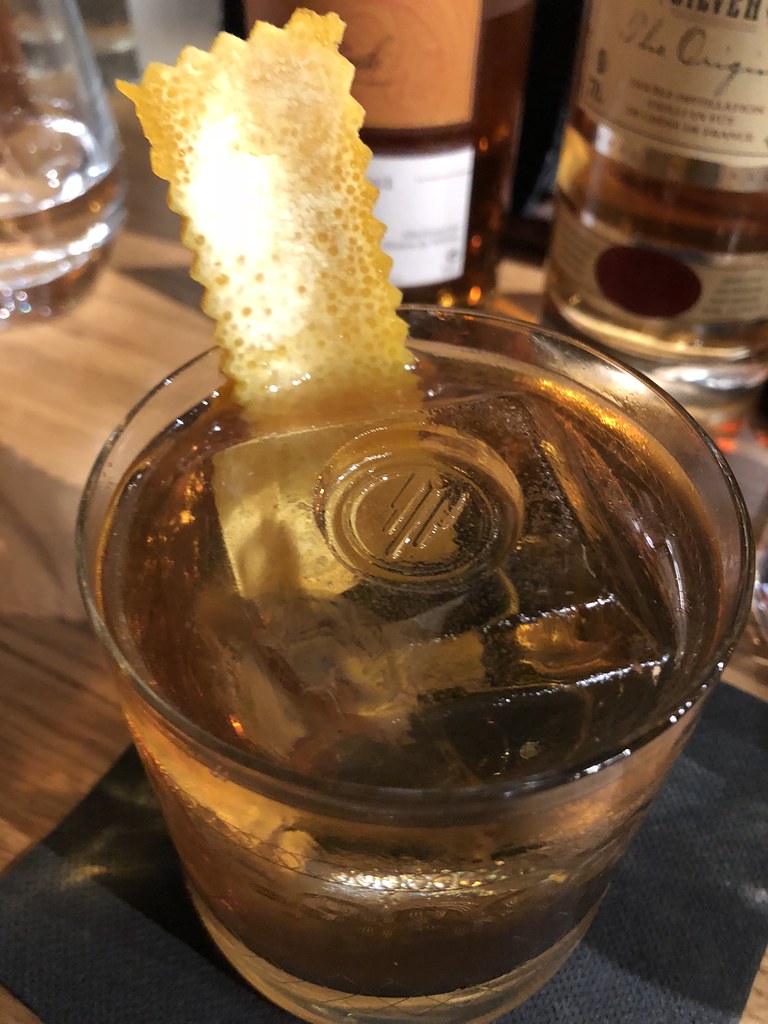 It's not easy to find, in fact it's one of the best hidden speakeasies I've been to! You first enter a sake bar and from there, it's up to you to find the dark cavern filled with whisky. And it's owned by Le Maison du Whisky so there's no surprise that there are over 1,000 bottles of whisky from around the world on their offerings.

Thibault found us all there and joined in for a couple of rounds before we called it a night. That's a lot of catching up for me on my first night in town! Very fun! 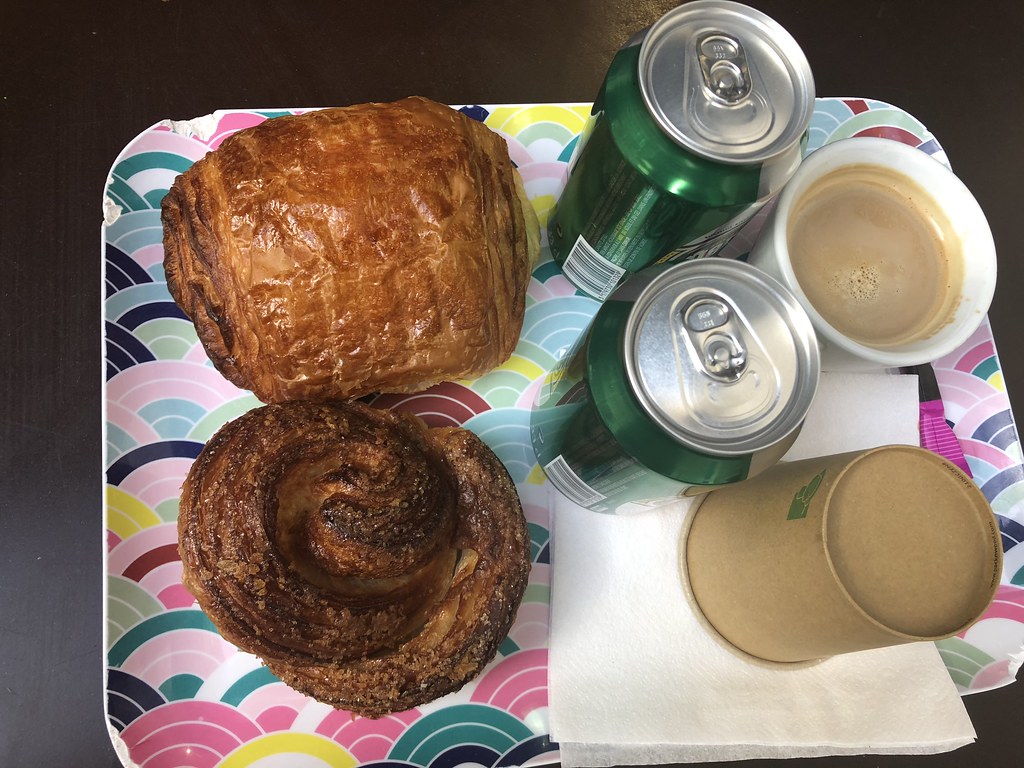 We had coffee and croissant/kouign amann at Ble Sucre the next morning. I'd been once before, but the ownership has changed, and Forest had never been as pastries aren't really her thing. It was close to our day's plans and it was a lovely little stop. And the kouign amann is still awesome.

But the highlight of the morning was going to the Atelier Lumieres which had just opened months before in an old factory space in the 11th. Their first exhibit was on Klimt who Forest and I both really like. Stepping into the bare cement space was a bit confusing, until the projectors started up and every surface was covered with Klimt's works. 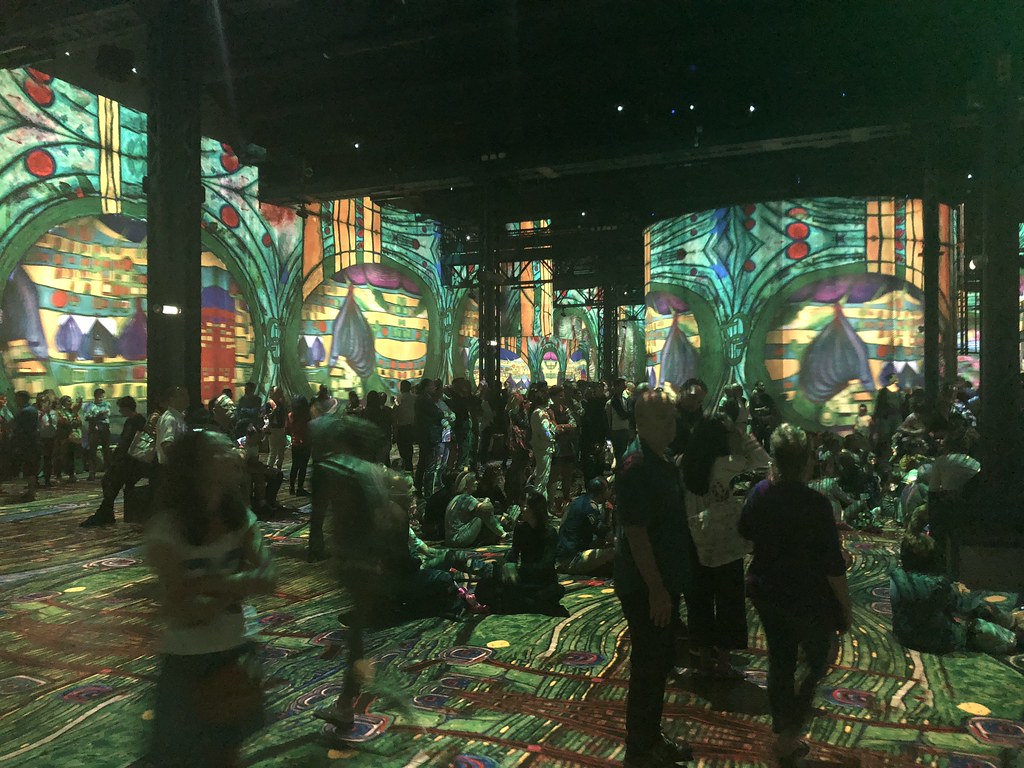 It was amazing. They also had a couple other short shows woven in. And, because us, we found their bar and had a glass of champagne while watching another light show. If you are going to be in Paris in 2019 they are showing Van Gogh Starry Night. Highly recommend! 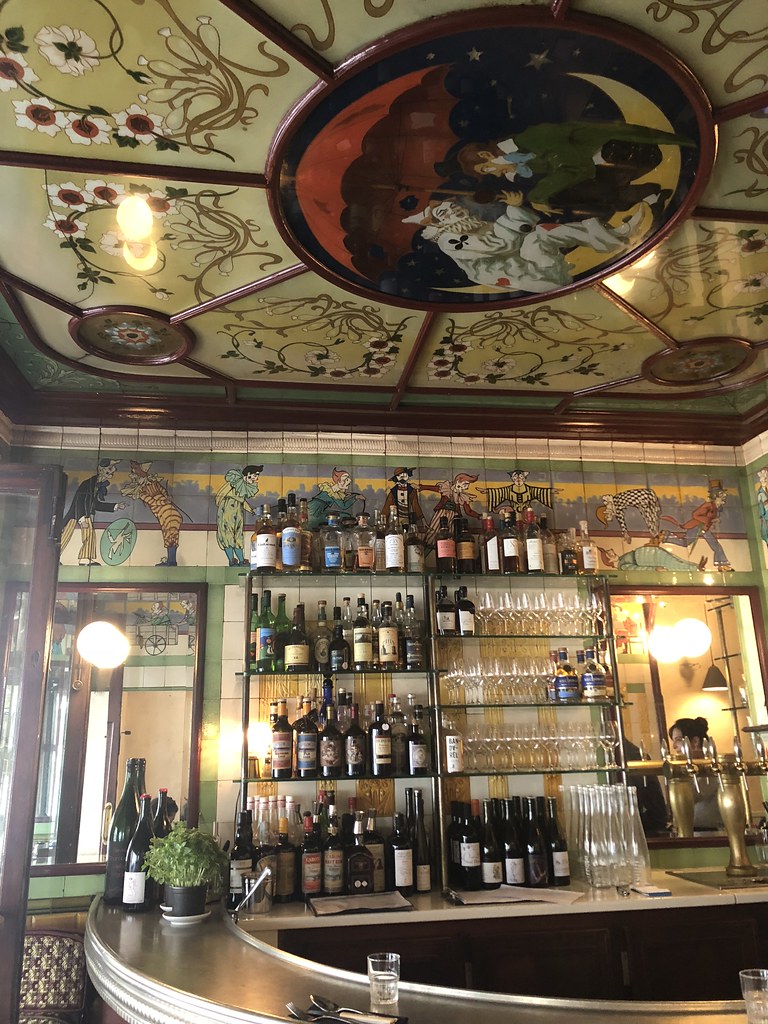 We walked the sunny streets of the 11th to the popular Clown Bar where we were meeting great girlfriends, Anna & Clio, for lunch. Clown Bar has been around since 2014, so it's a bit easier to get a ressie now, but is still a foodie favorite. It's not plush, there are no tasting menus, but the ingredients and dishes are unique and decadent. 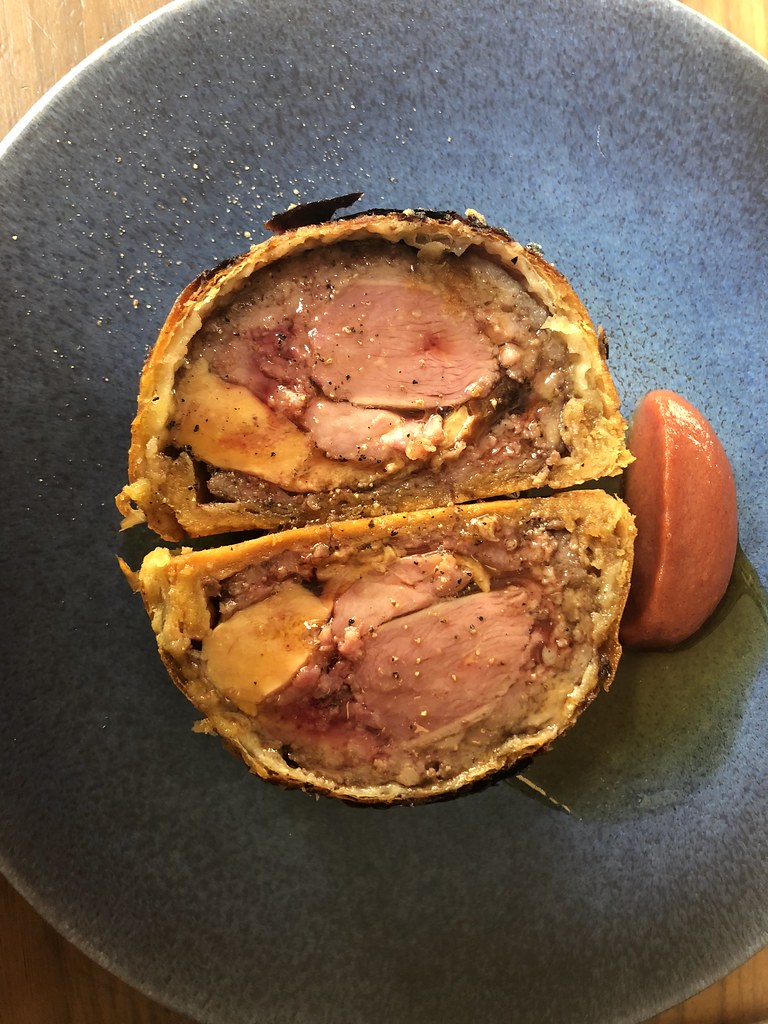 We had a great meal, and a great time, and a few bottles of natural wine (all the rage in Paris). We continued with some more wine at a random sidewalk café next to the super cool and super overpriced shop Merci.

Forest and I bid our friends à bientôt and made our way to the 16th to meet her friend and author David Lebovitz for a drink at Cravan. The bar had only been open a few months when we visited but the drinks were already proving to be unique in their nod to a former era. 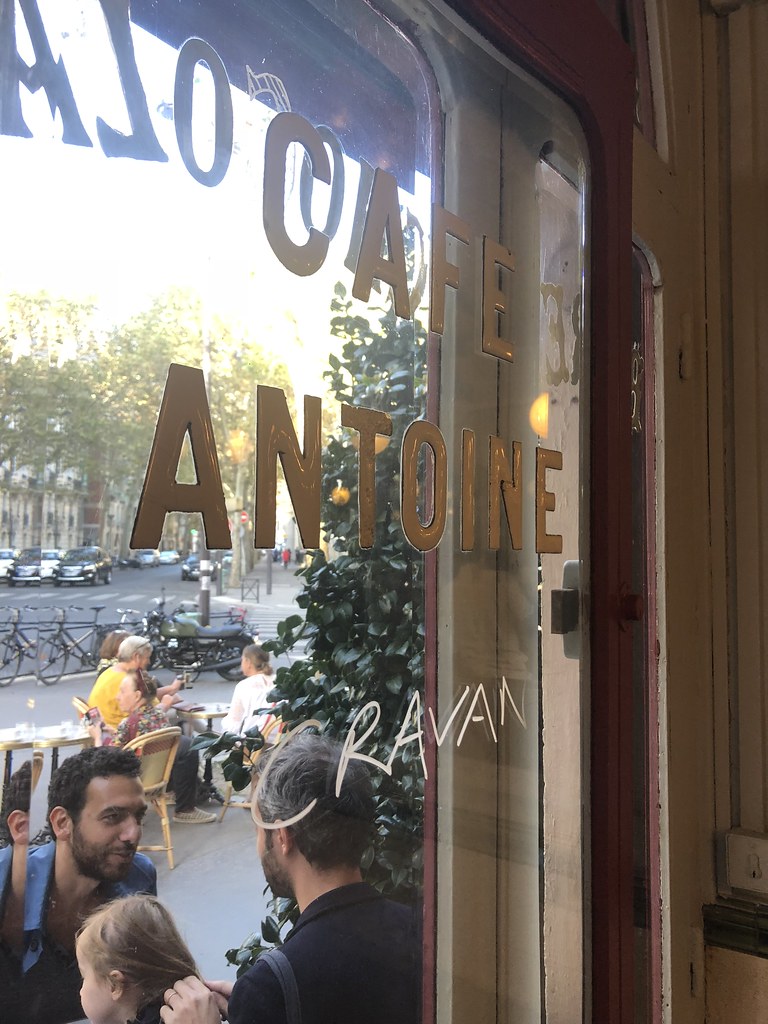 This is such a sweet spot, I loved the space which is an old art nouveau cafe. I was told the coffee and the small bites were good too, but we stuck with cocktails :) And it was lovely to meet & chat with David who's books and recipes I am a fan of. 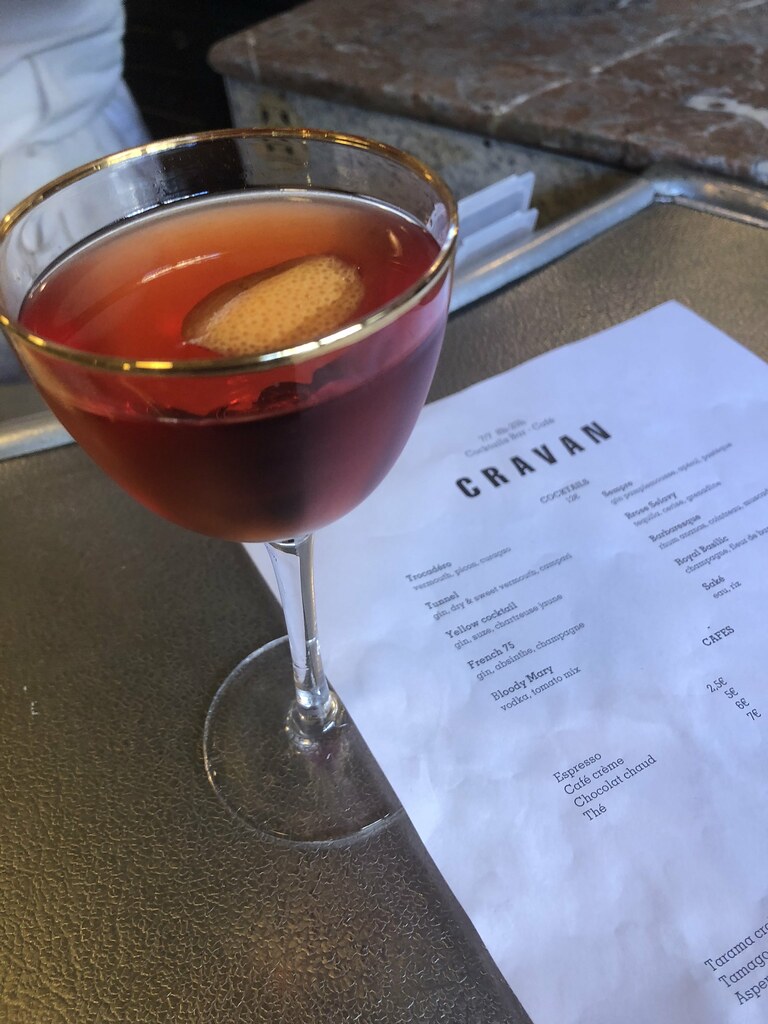 You can read all the details about Cravan on the 52Martinis site here and on David's site here.

After a few rounds, Thibault joined and the four of us wandered off to find a quiet café with outside tables for a casual dinner (mine included aligot!).

I'd say that was a pretty special start to a long weekend!