The Sacred Valley of the Incas

Jan 1, 2019 we left the Amazon and flew to Cusco via Lima. We were met at the airport by our driver who had been arranged thru our hotel in advance. Renting our own car was inadvisable, suggested my friends who live there, and as we rode 1 1/2 hours in the dark on very rough roads I was glad we had listened! 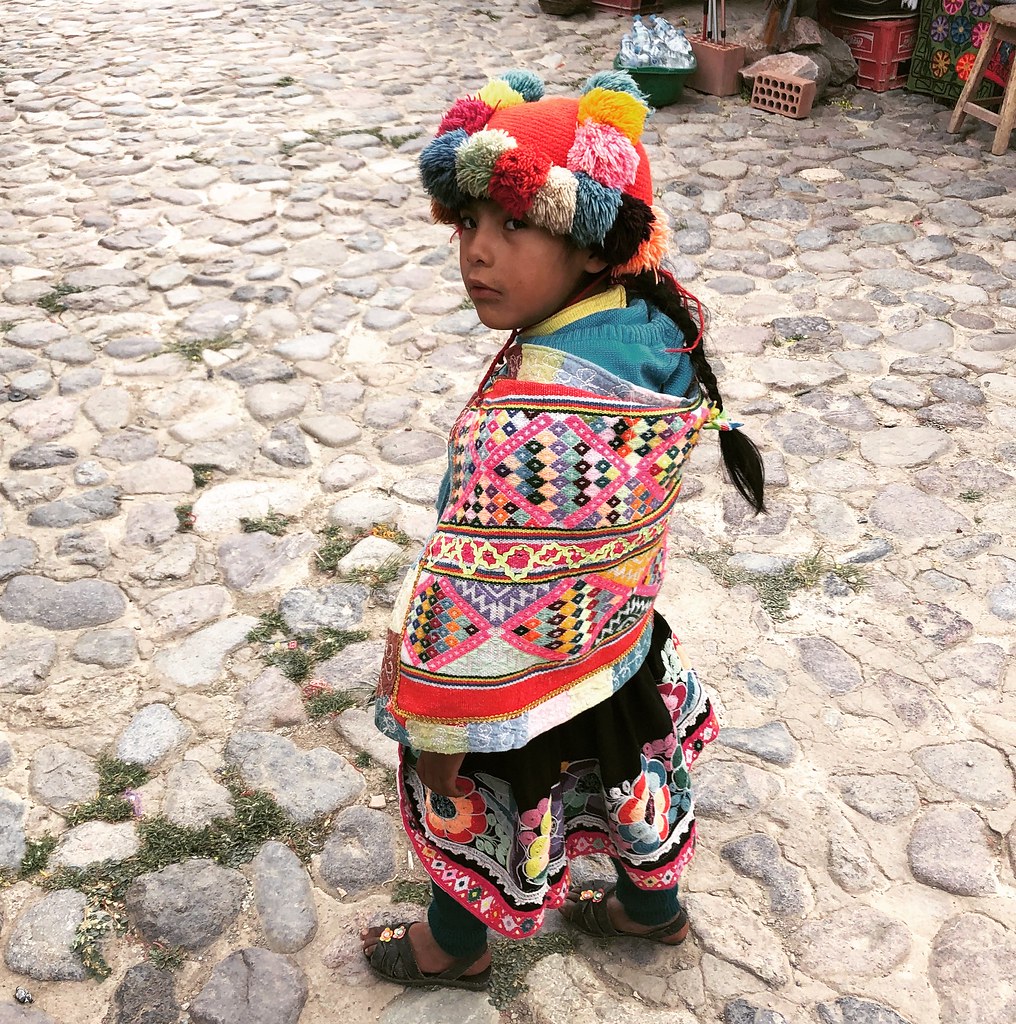 We had decided to stay in the town of Urubamba for 4 nights. This would give us a more central base to not just explore Machu Picchu but to hike around other Inca ruins (there are actually 16 others in the area) and also eat at the new restaurant MIL, just recently opened by Peruvian chef Virgilio Martínez Véliz of Centrale in Lima.

We checked into the Hotel Inti Nan and were shown to our rooms by the hotel manager. When we inquired where we should have dinner that night he explained that most places would be stopping service soon, so he drove us in his truck to a place he knew served late. I think it was 8pm!

It had been a very long day involving a skiff, two seperate 1 1/2 drives on questionable roads, and 2 flights. We were all exhausted and turned in right after dinner!

The hotel provides a great breakfast buffet of yogurt, popped quinoa, fresh fruit, fresh bread, scrambled eggs, cheeses, meats, fresh juice, coffee, and tea. And they have a basket of coca leaves set out that you can help yourself too! 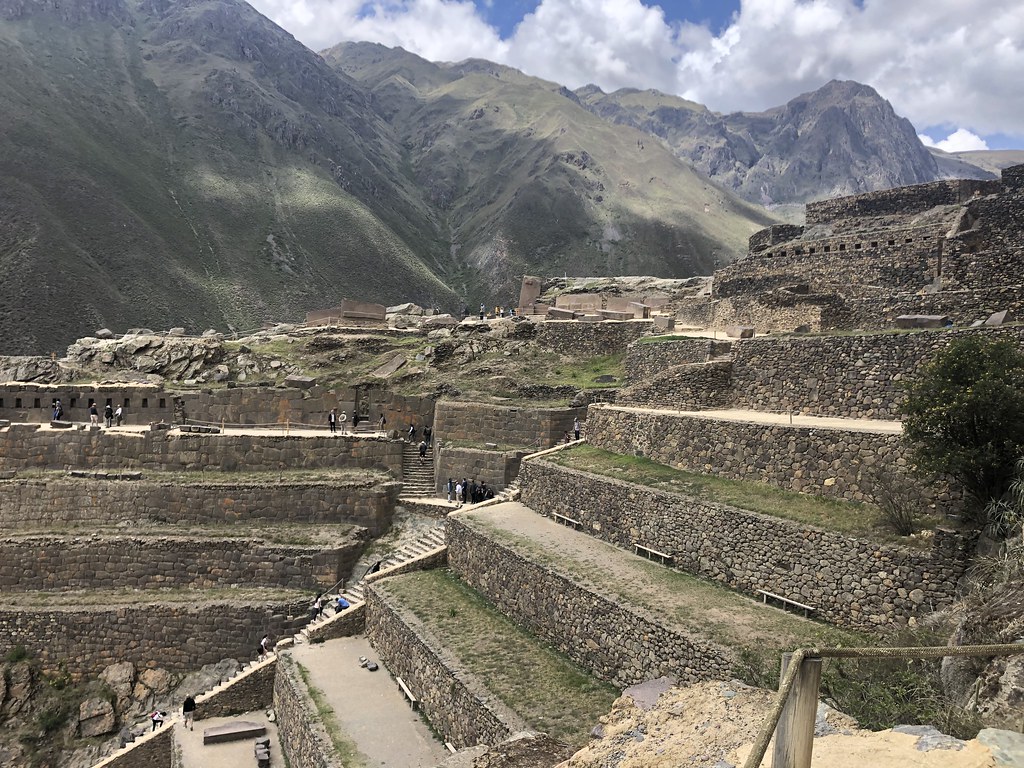 On our first full day in the Sacred Valley we had booked a private tour with Cusco Transport on the advise of a friend who used them the year before. They picked us up in the morning in a comfy mini van, offered each of us a bottle of water, and we were off for the day! First stop, the adorable town of Ollantaytambo and the incredible ruins there. We were able to buy a pass for all the area ruins for 130 Soles (not including Machu Picchu) and it was good for 10 days. More than what we needed but the other option was just a one-day and not as well priced. 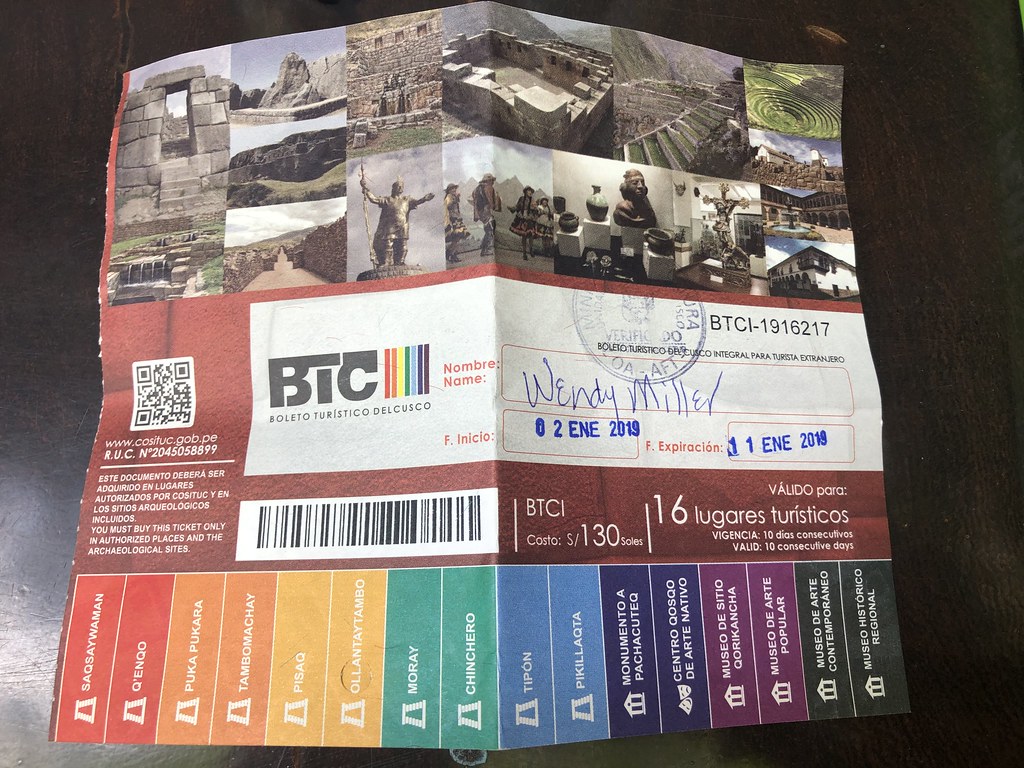 At 9,160 ft altitude, it was the lowest of the ruins we visited, but as it was our first day out we all felt the effects of the lack of oxygen! Our guide kindly stopped every once in a while as we climbed up the terraces, to explain about the ruins and to let us catch our breath! And of course I had a handful of coca leaves in my pocket! 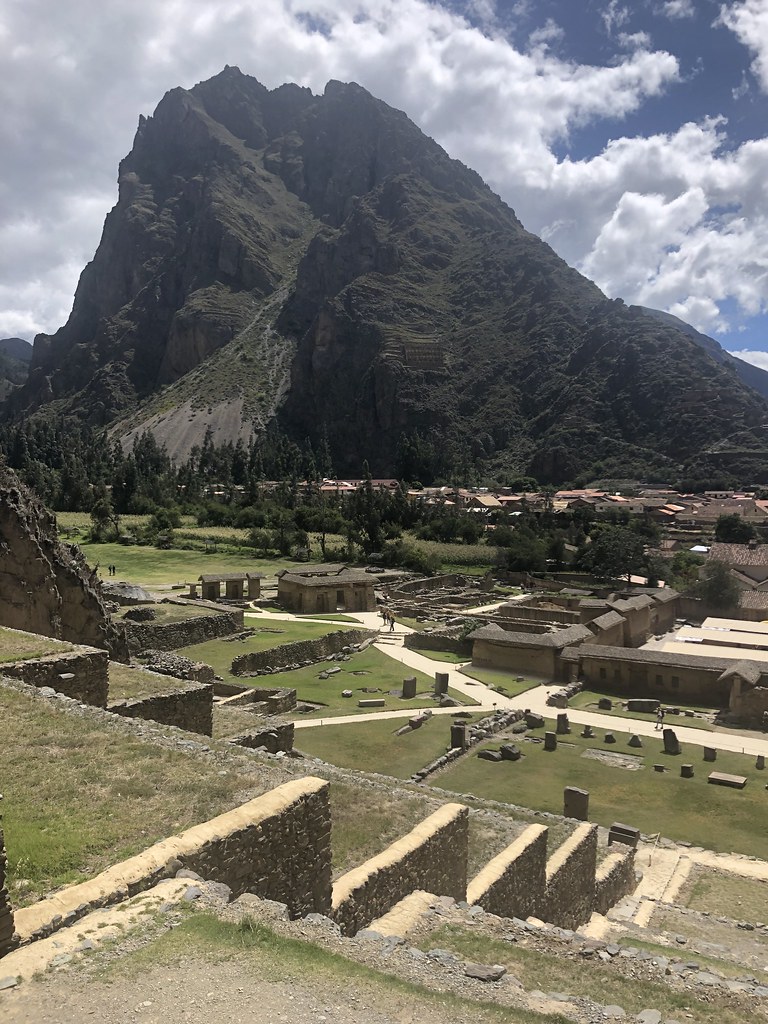 This important site included a village with farms and military posts as well as agricultural storage high up in the hill across the way. Our guide also pointed out where the massive boulders came from, across the river, 5km away. Incredible! 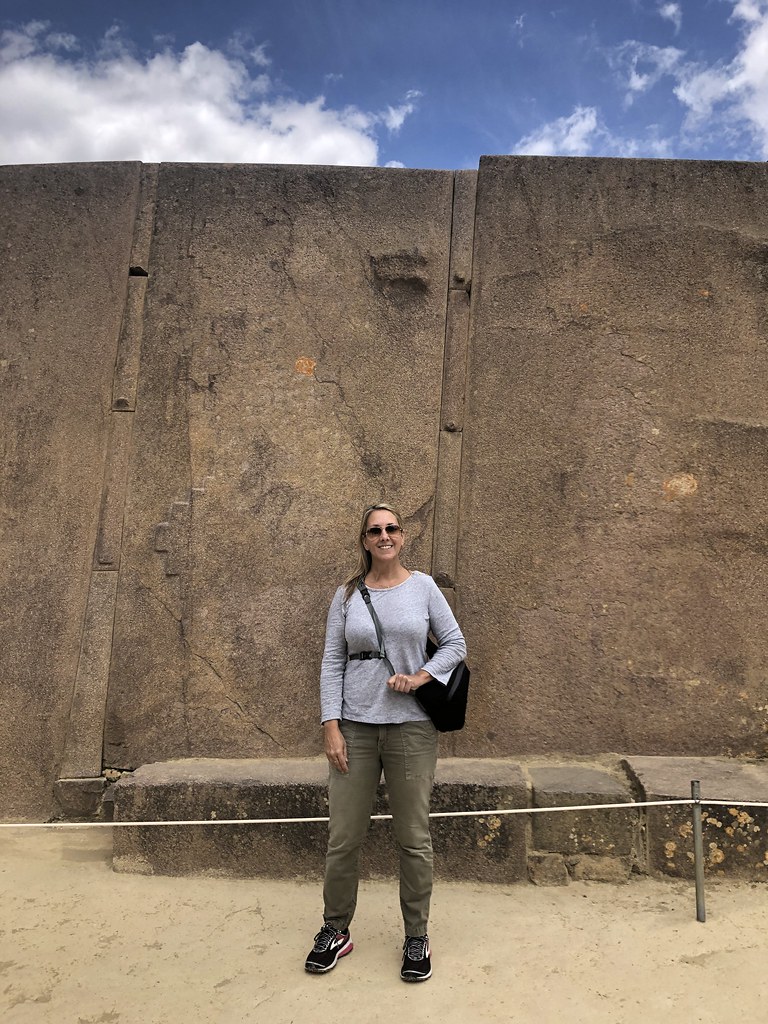 He also explained that the modern day village was built on top of the ancient village, with the current homes having Inca foundations! It was such a great introduction to the area, we were excited to see more! 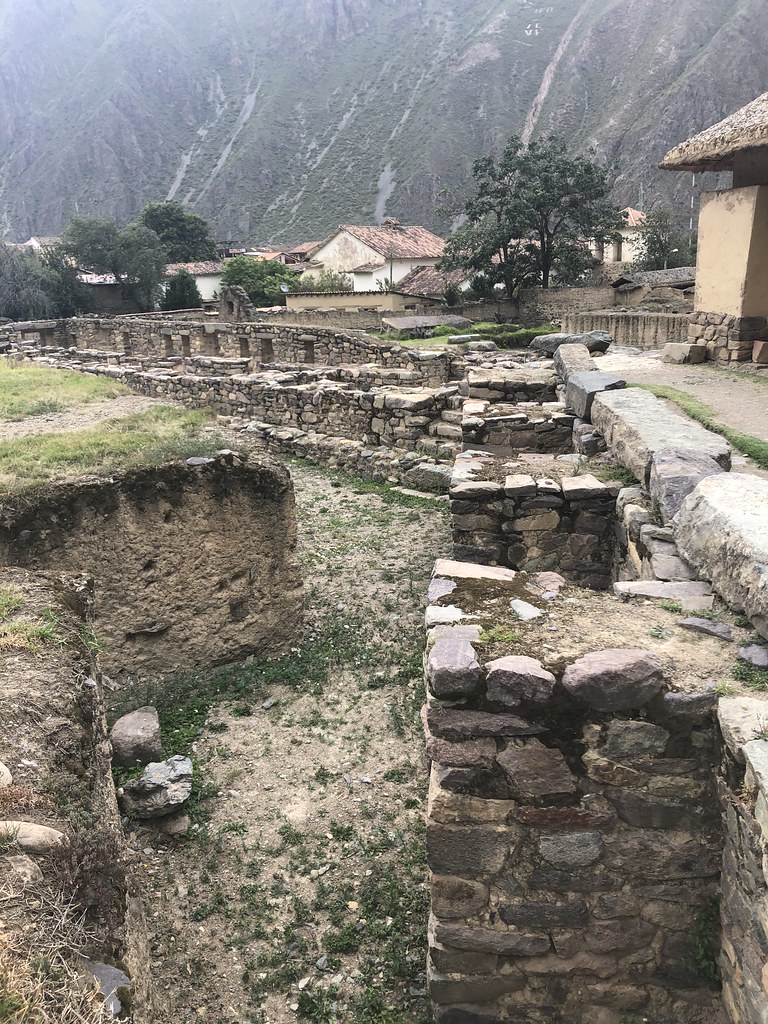 From here we drove back through our town of Urubamba to get to Pisac, as there is only one main road that cuts through the valley. We had to pull over as we entered our town as there was a big parade going on with men on horses, a marching band, and lots of people on the sidelines cheering one particular gentleman who was being showered with flowers. 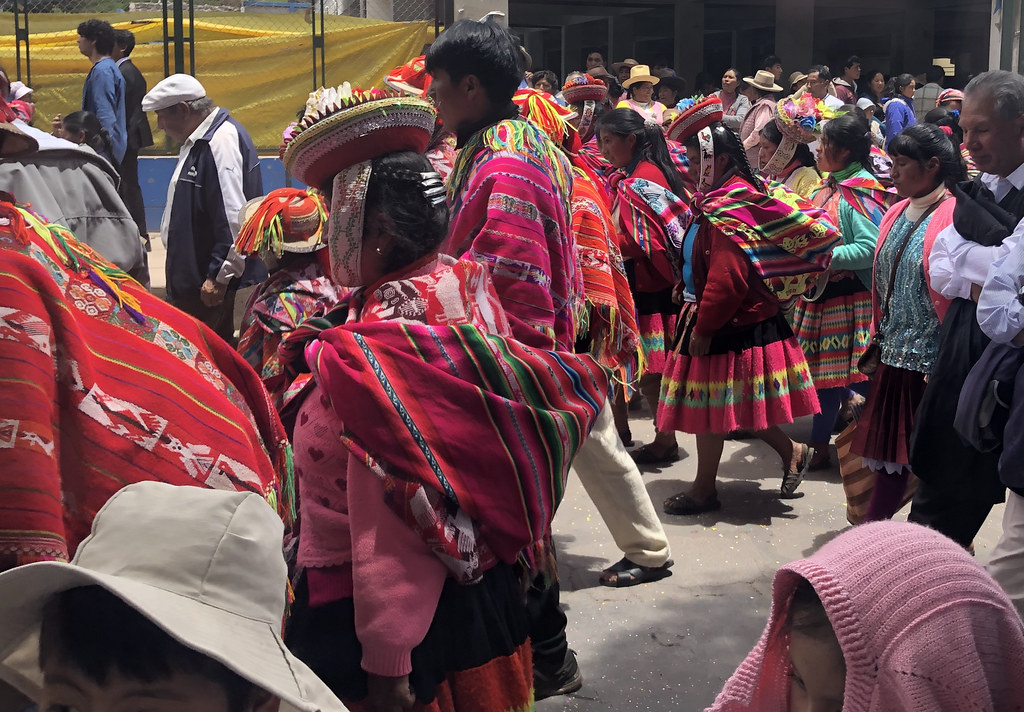 Turns out that the first days of January are when the new town mayors are welcomed into office. The brightly colored traditional costumes signal which villages people are from. It was really cool to stumble into the excitement!

We arrived in Pisac, which although was much more touristy than we had encountered so far, was still relatively quiet and very pretty. We made it to the town square and to the Pisac Inn where we had a very good lunch at their restaurant Cuchara de Palo. The only negative was that the credit card machines were down, as was the only ATM in the town, so we ended up having to pay with pretty much all the cash we had on us.

Pisac was also welcoming their mayor, and there was a stage set up in the square with lots of speeches being made, as well as a chicken lunch being handed out to everyone in town! 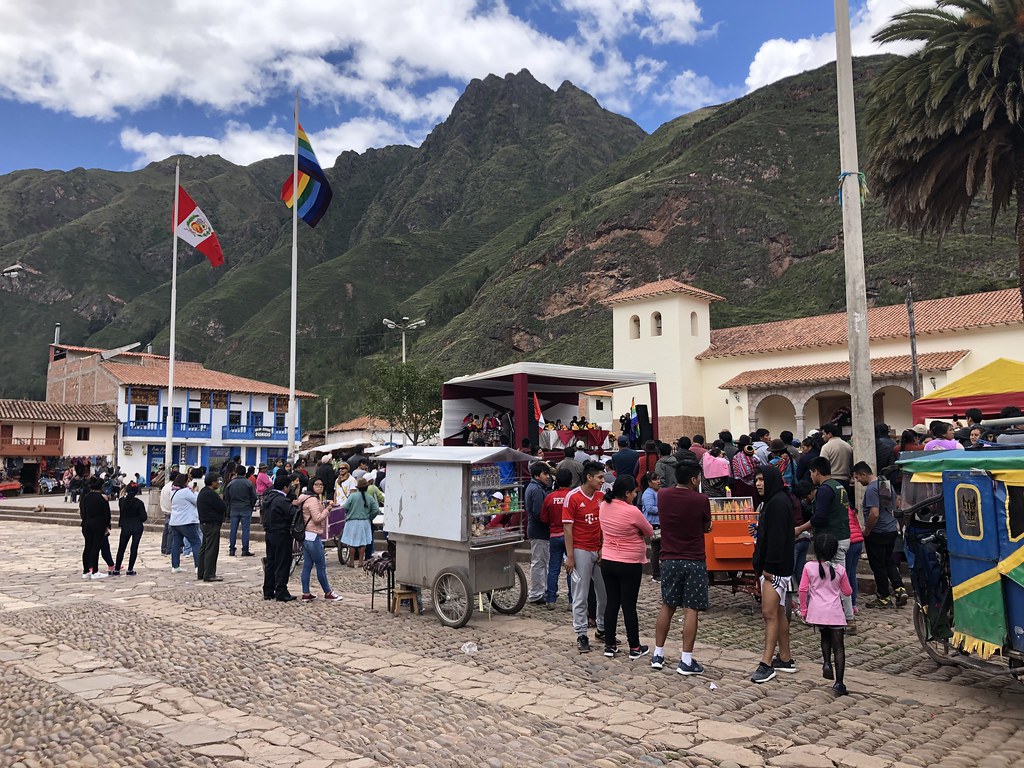 On the way to the town's well-know market, there was a woman dressed in traditional costume feeding her similarly costumed alpaca and baby sheep. She happily posed for photos as long as you dropped some coins in her basket. 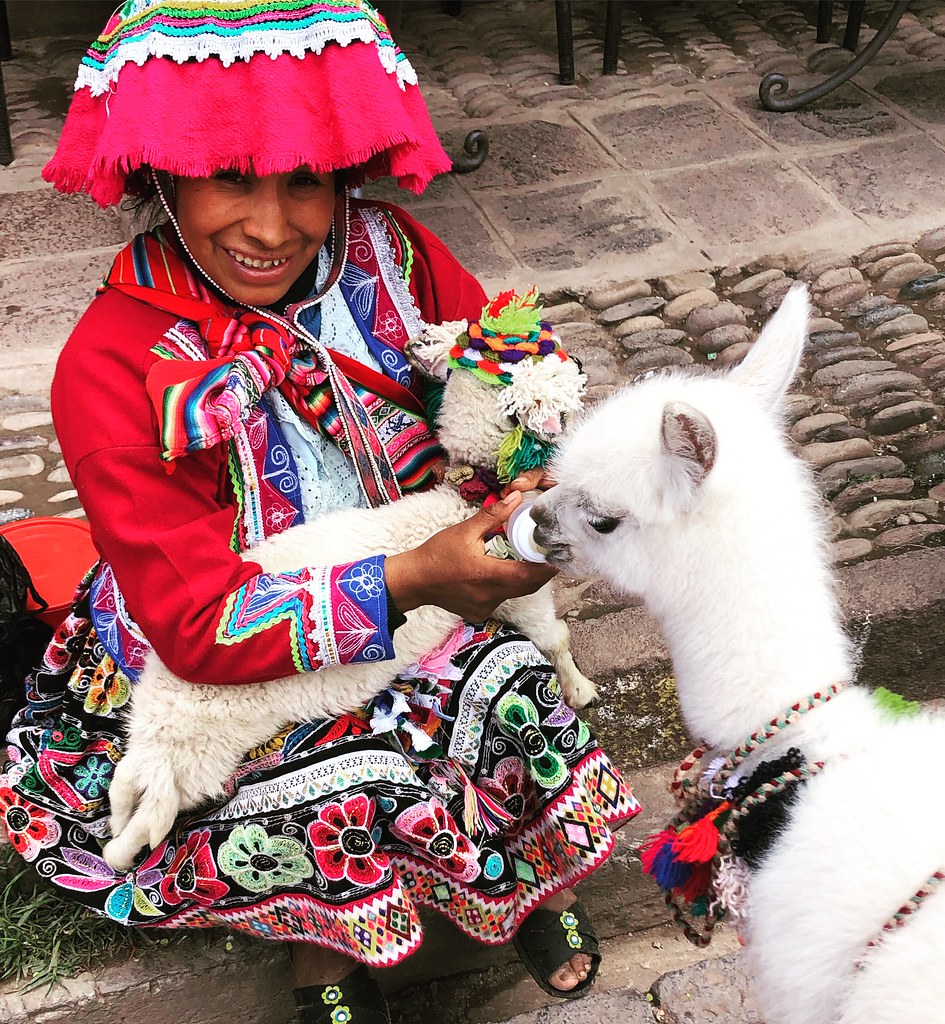 After a quick shop through the market, where I bought a gorgeous baby alpaca wool sweater and some super cute gloves, we drove up to the Pisac ruins. Huge terraces reach down into the valley, with small stone villages nestled at the top. It was stunning! 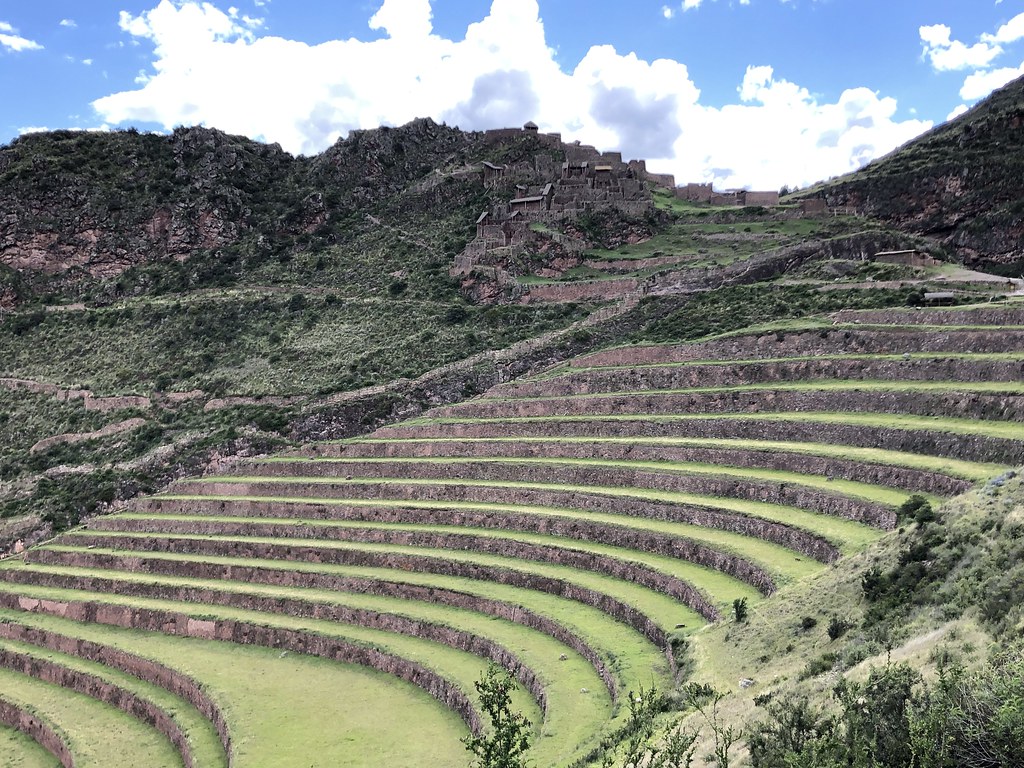 Pisac was an agricultural, religious, and military village. Our guide pointed out hundreds of caves in the walls of the neighboring cliffs, hand dug graves for the ancient inhabitants. I'd never seen anything like it. 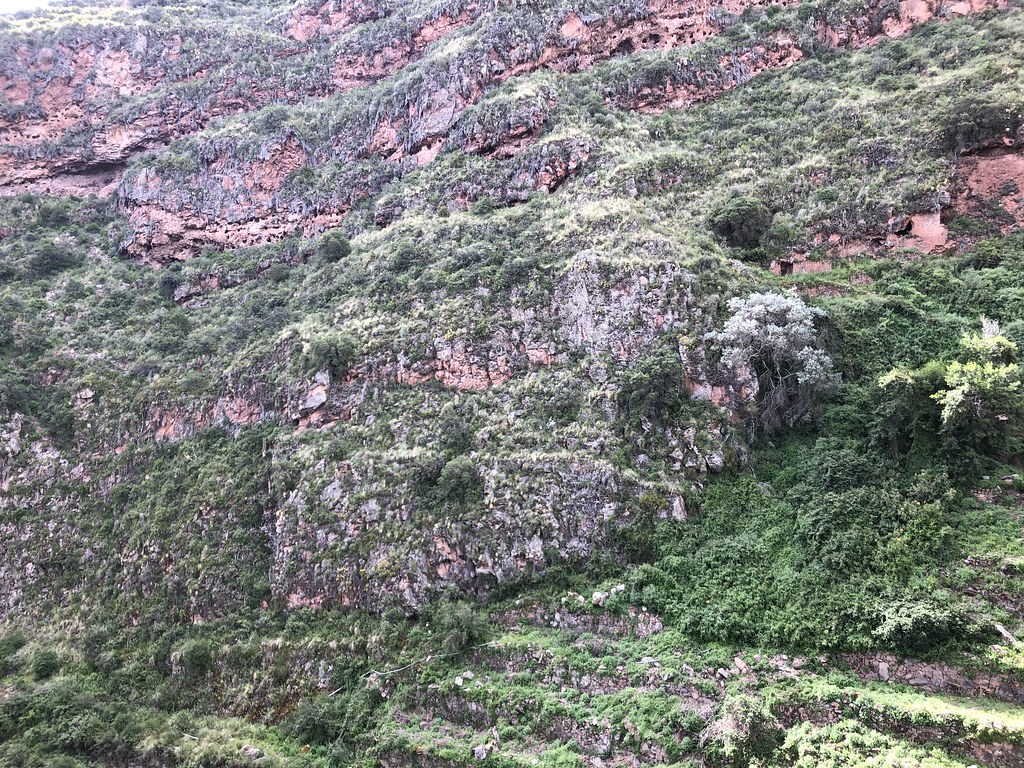 We were at 11,293 feet elevation now and it was really tough to climb and catch my breath. This is much higher than we would be at when we went to Machu Picchu! 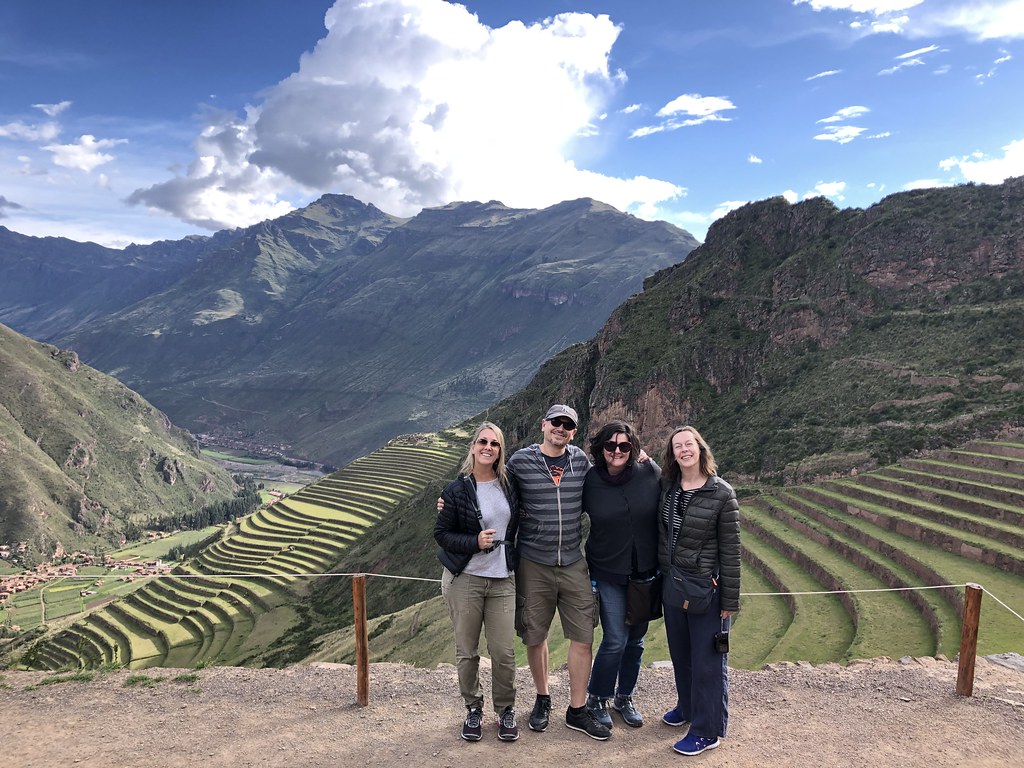 Both the sites we toured this day were spectacular! I'd highly suggest taking the time to visit. We were also all very happy with our guide, our driver, and our comfy mini van! I would absolutely recommend Cusco Transport if you are looking for a private guide. 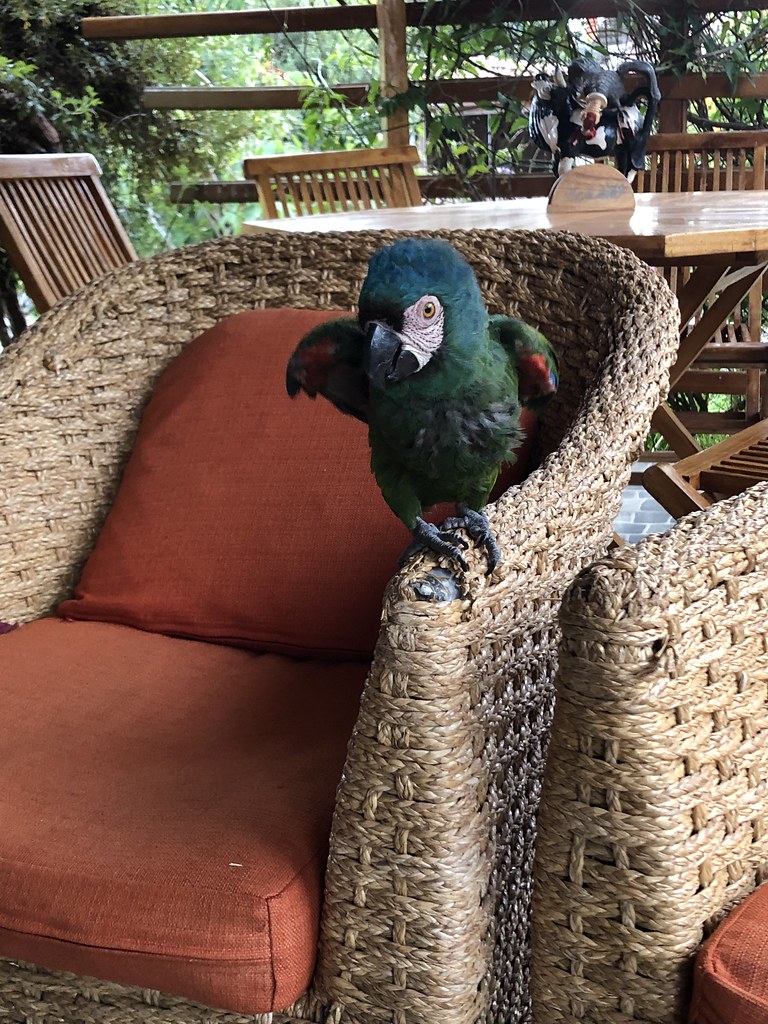 They even stopped on the way home so we could get more cash and grab some groceries for happy hour, which we tried to enjoy outside at the hotel, but were chased off by the resident parrot!

That evening we hailed a couple of tuk tuks and had dinner at El Huacatay, recommended by our tour guide. It was a lovely little restaurant with primarily outside garden seating. All the food was good and I especially loved the Peruvian hot chocolate I ordered for dessert! 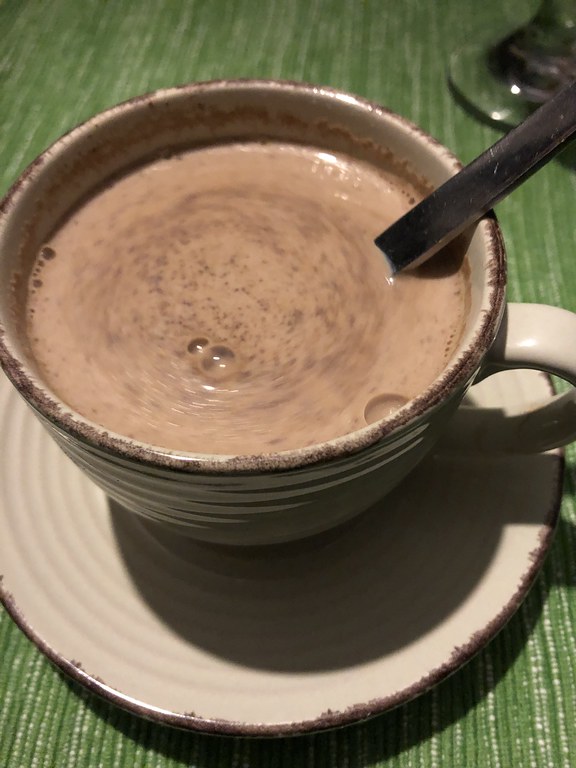 It had been a full day and we had another one the next as we'd be visiting Machu Picchu! We were all very excited and headed to bed early!


All photos from the Sacred Valley here.

Other posts from this trip:
24 Hours Miami
Lima City of Kings
Welcome to the Jungle
Piranhas and Pink Dolphins
Ringing in 2019 in the Amazon
Discovering Machu Picchu
Dining at 11700 Feet
Cusco Daytrip
Return to Lima
at April 22, 2019