The Longest Way to Oz

Sometimes I feel like I haven't been to the "normal" places that people travel to, such as the case with Australia. But I knew I'd go, especially as a small group of friends who I met when they lived in Seattle has been moving back to their homeland over the last years. And with one of them having a birthday approaching I announced my plans to finally travel down under! 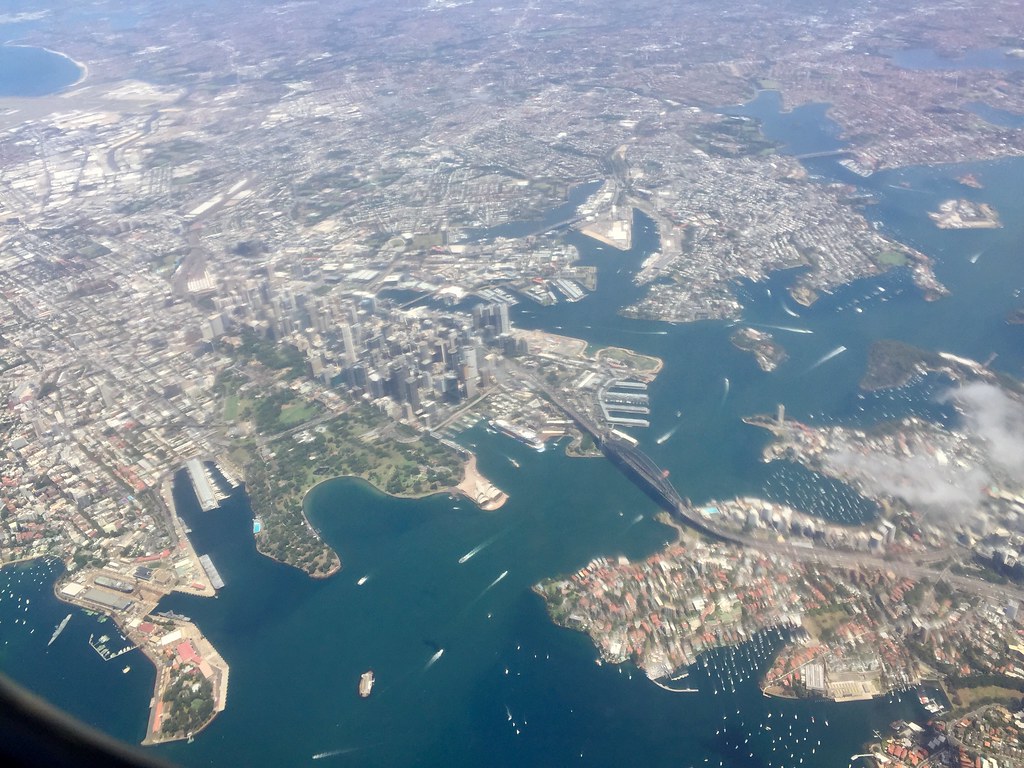 With a 15 hour flight from the west coast, crossing the international dateline, and a 17 hour time difference I decided to splurge and purchased a Business Class ticket on Qantas (which I had never flown before.) I was excited!

The Monday morning I was to fly SEA to SFO to SYD I woke up to snow! Anyone who's ever been in Seattle when there is snow knows that everyone freaks out and the city pretty much closes down. I sat in the Alaska Air 1st class lounge for 2 hours before they announced my flight was going to be delayed 5 hours and I most likely would not make my connection in SFO. Ugh.

A friend of mine drove down to the airport and met me for wine and dinner which helped to break up the time. Finally the flight took off and as we landed in SFO we were told that the Quantas flight had been delayed and was still at the gate! Great news! But after 2 more hours of sitting in the (crap) Business Lounge, they announced that due to mechanical issues the flight was canceled and we'd have to stay overnight. 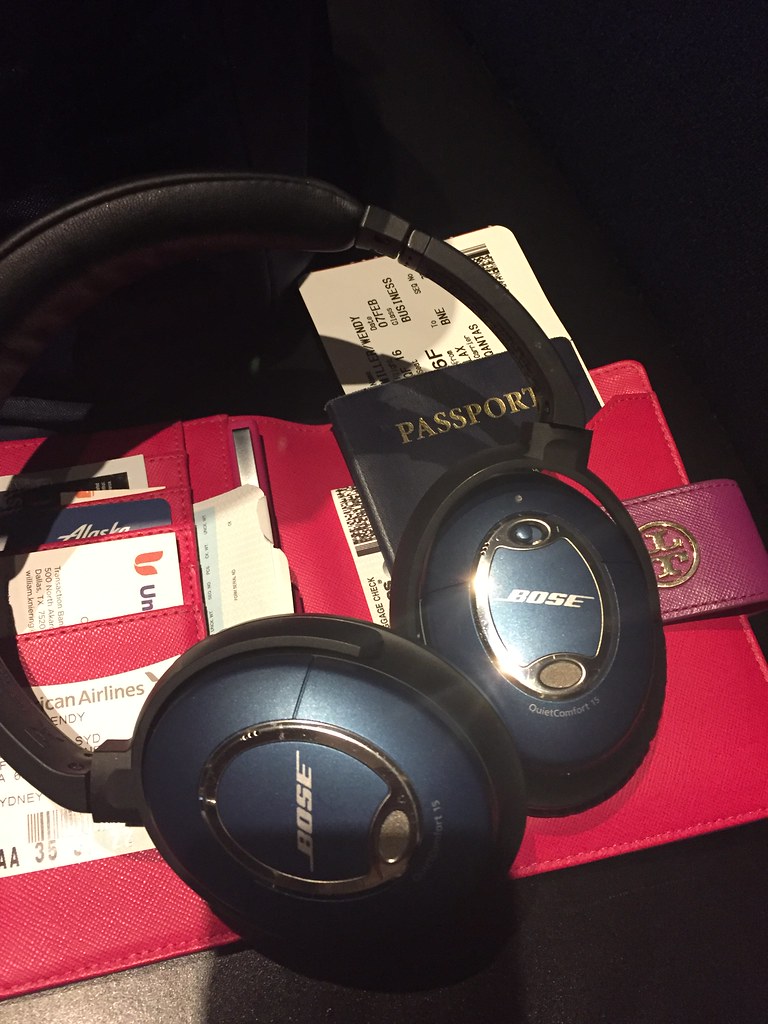 Instead of queuing up to have the airline shuttle me to some random hotel, I used the Hotel Tonight app and booked my own within the guidelines of the reimbursement amounts.

I checked into the Sheraton 4 Points near SFO and was finally in bed at 2:30am. So far it had been 10 hours and I'd made it from Seattle to San Fran.

Tuesday I woke up, had some breakfast in the restaurant, did some work from my room, and tried desperately to get a hold of anyone at Quantas who could tell me the status of my flight and also where my luggage was.

Finally an agent on the phone suggested that I rebook as she felt that the rescheduled flight was going to be canceled again, still due to mechanical issues. If I wanted to stay Business Class I'd need to fly SFO to LAX to Brisbane to Sydney. Jesus.

I had negotiated a 4pm checkout and at that time I took the hotel shuttle to the airport where my first task was to track down my bag. Since no one from Quantas was at the airport (they had indeed canceled the only flight out) I went to the Alaska Air office and talked them into finding my bag. Success! 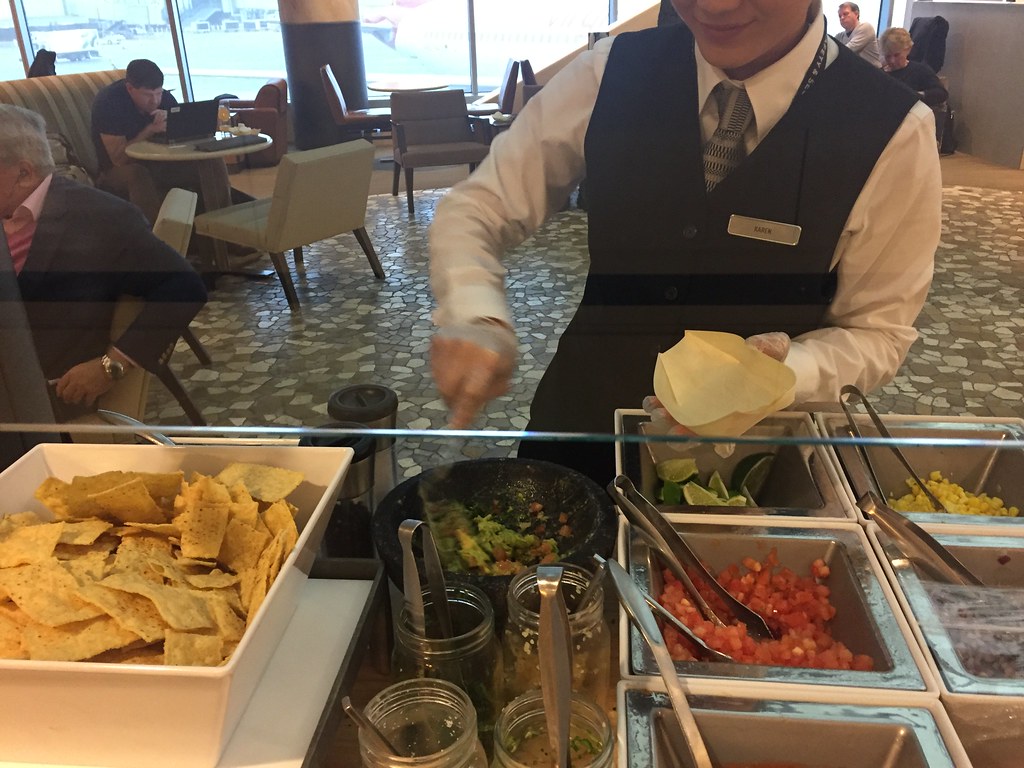 Next to the American Air check-in counter where I checked my bag, got my boarding passes to LA and then on to Brisbane, and then talked my way into a pass at the American Admiral Club. I had 2+ hours to wait and I was focused on the guacamole bar and drinking for free during my wait! 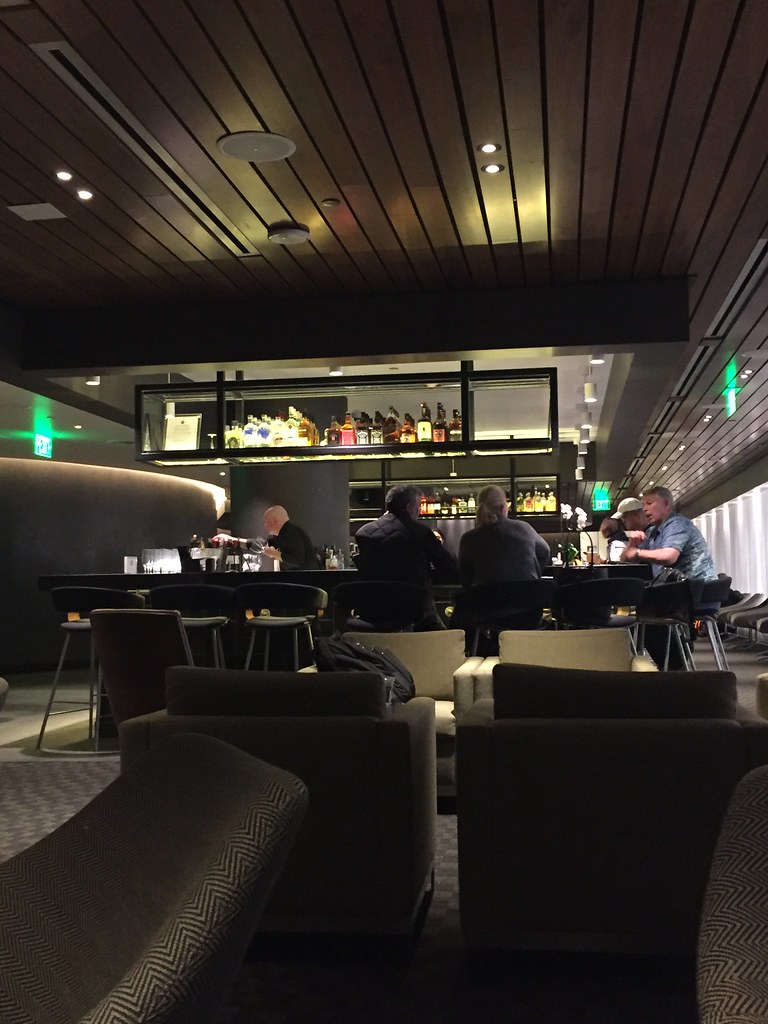 7:45pm I flew to LAX. I had another 2 hours before my flight to Australia which I passed in the very nice Qantas Lounge. 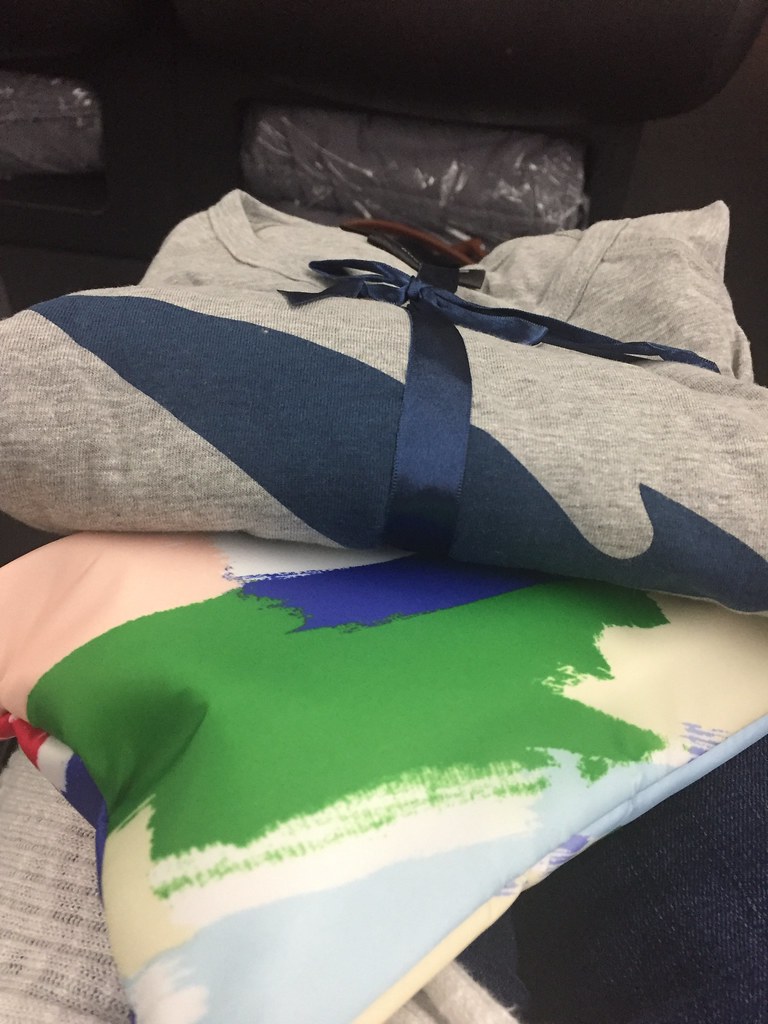 11:30pm Tuesday night, time to board my 747 to Oz. My Business Class seat was very cushy. I was handed a Kate Spade toiletries bag and also a pair of cotton pajamas. PAJAMAS!!! And after my multi-course dinner, wine, and cognac the flight attendant set up my lay-flat chair with a mattress!!!

32 hours after leaving my house in Seattle I was finally on my 14-hour flight to Brisbane. It was a very comfortable flight, most of it spent asleep in my Qantas pajamas on my lay-flat mattress. 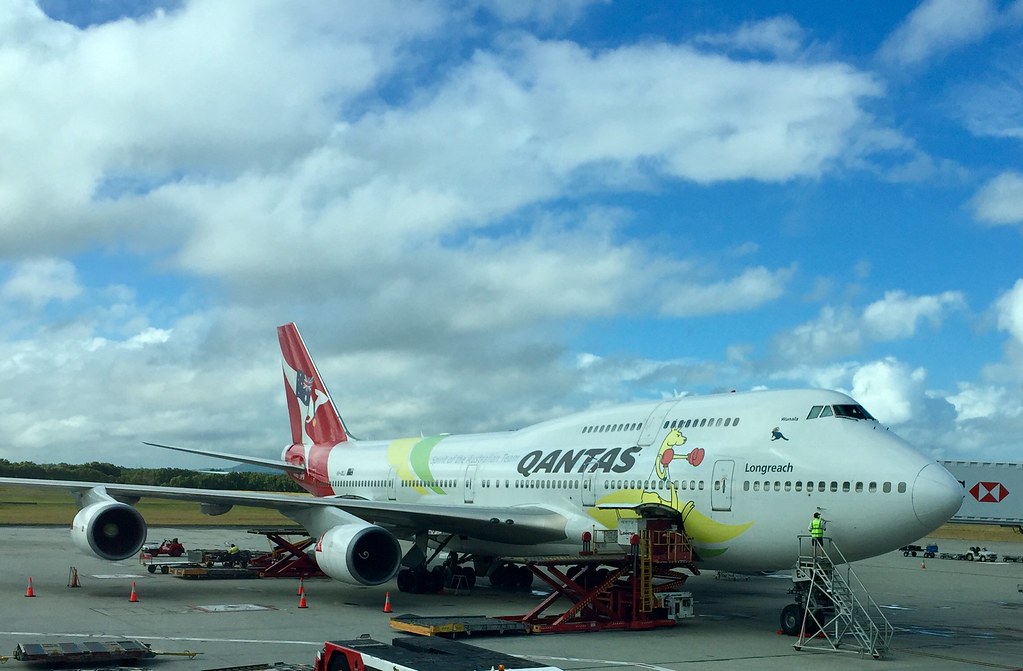 I landed in BNE on Thursday and even though they have an automated customs process which is super quick, I had to recheck my bag and get to a different terminal for my domestic flight and it was too close of a connection. So the flight was missed but luckily they run flights hourly.

I had some breakfast and coffee in the Business Lounge before my last 2-hour flight of the journey and finally landed in Sydney. 1 ½ DAYS LATE! 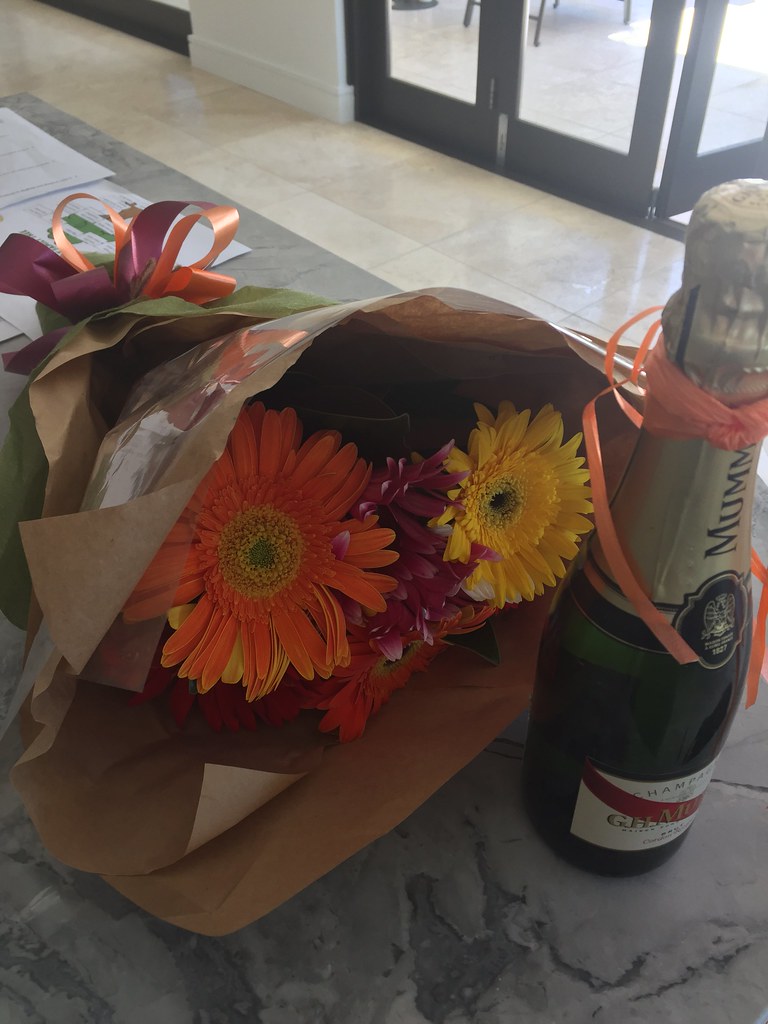 My friend Dave met me at baggage with a luggage cart, a bottle of champagne, and a bouquet of flowers. And somehow that made the 2 canceled flights, 2 delayed flights, 1 missed flight, 4 actually flown flights, 1 hotel, and 5 airports not really matter much. I was in Australia for pretty much the month of February and couldn't wait to catch up with my friends and see their country! 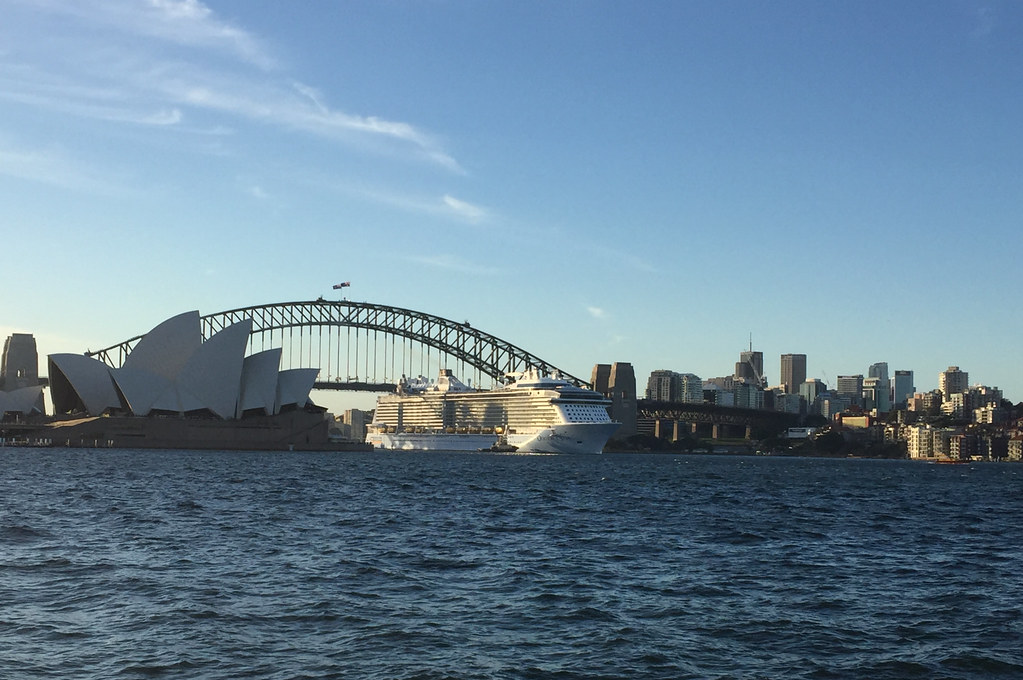 Other posts from this trip:
An American Down Under
Meet Up in Melbourne
Yarra Valley Wine Tasting
48-Hours Gold Coast
Welcome to Fantasy Island
Woolloomooloo
at October 29, 2017