I don't know about you but when one of my friends says "hey, I got this great deal for 5-nights at the Westin Kaanapali Resort, want to join?" chances are slim to none that I'm going to say no! Especially when I've taken advantage of that same deal in Maui and Kauai and know the resort is wonderful! 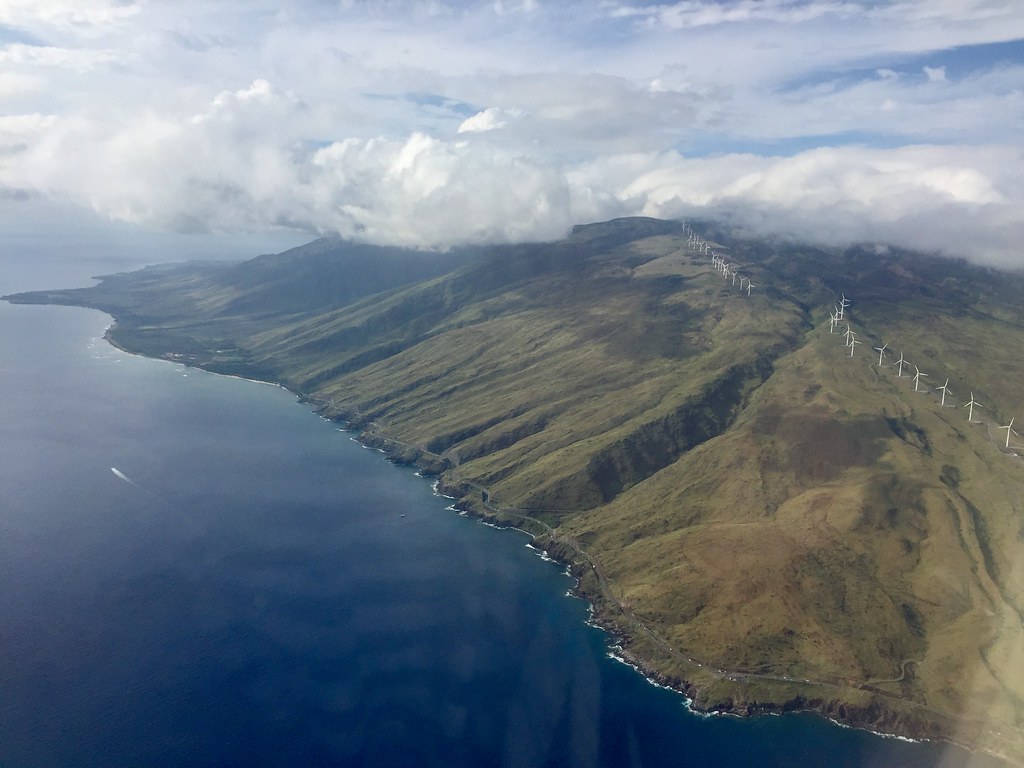 I cashed in some miles for a First Class ticket on Alaska Air and had an easy 6 1/2 hour non-stop flight to the Valley Island. Although I did almost miss the flight as I had my earbuds in while standing outside the gate and was thinking that they were late in boarding; turns out they boarded right before I walked up and they were ready to close the gate when I finally asked the agent what the hold up was. Dumb!

Normally the flight is a bit shorter but we had 1180 mph headwinds and a fair amount of turbulence! Thank god for free Mai Tais! 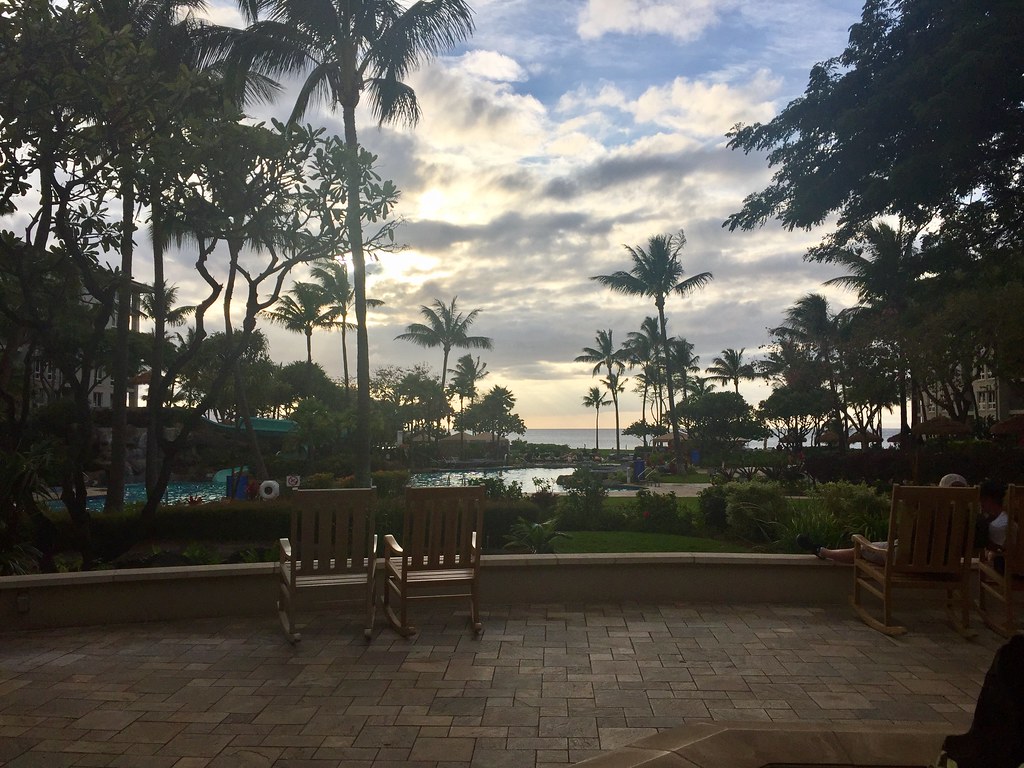 Judy was waiting for me at the airport in our complimentary rental car and we made the 1-hour drive to the Westin Resort. We checked into our room on the 2nd floor in Building 4 which had a nice lanai but no view. More importantly, we made it down to the bar just in time for Happy Hour Mai Tais which we enjoyed by the outdoor firepit. It was an early night for both of us after long flights (Judy had flown all day from North Carolina!) 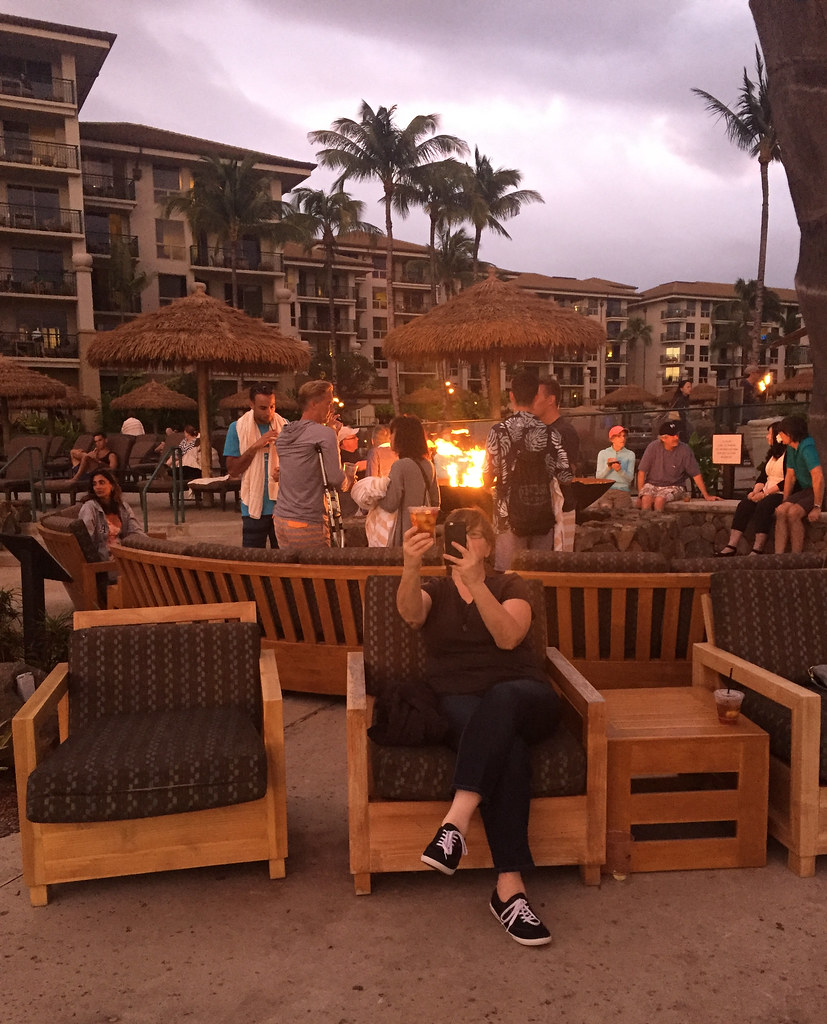 Judy and I have very different schedules, so while she was up before dawn each day, I woke up around 8, went for a beach walk/run, and then settled into breakfast at the Westin. As with the resort in Kauai, they have the program that if you don't want daily housekeeping you can have one free buffet breakfast each day. She took the buffet while I ordered something different off the menu daily.

Kaanapali Beach has a nice little beach front walk that follows the shore and winds through some of the other resorts. The first morning Judy joined me & we followed the trail towards the east for about 2-miles round trip. It was absolutely beautiful out and a perfect temperature! When we finished I had this delicious breakfast of fried egg, spam, and fried rice. With a mimosa of course! 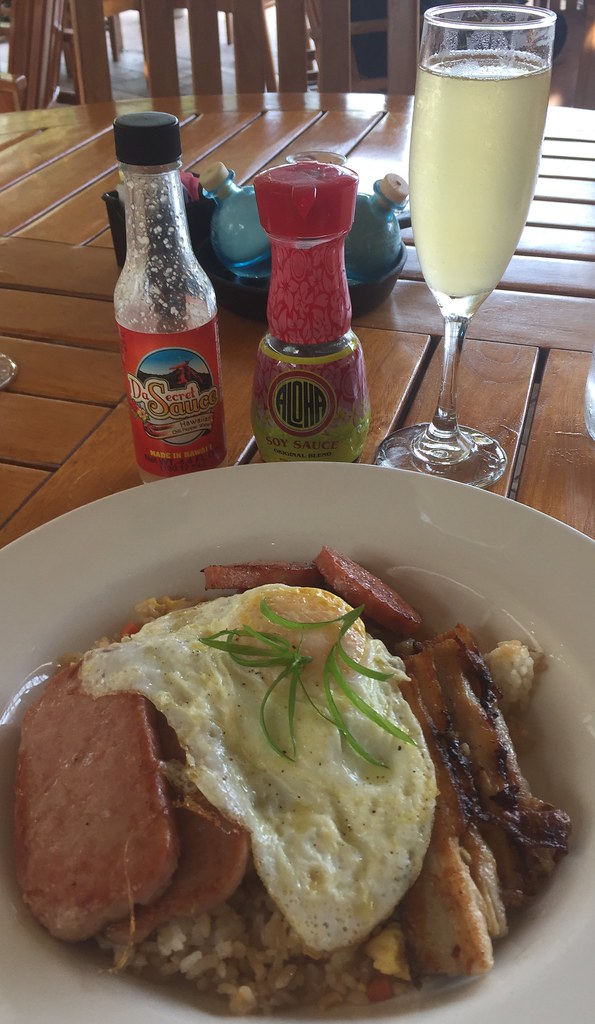 After I did a bit of work back in the room, we headed out to lunch at Star Noodle. We'd both been before but it is delicious so we were happy to go back. We had fried wontons, chicken wings, and the Vietnamese crepe which were all good, but that crepe is amazing!

Judy then drove us to the adorable town of Makawao, which I had never been to before. It didn't take long to walk up and down the main street with its old wooden buildings. We popped into a few shops, including Maui Antiques which is owned by the brother in law of my neighborhood coffee shop, and browsed the little farmer's market. 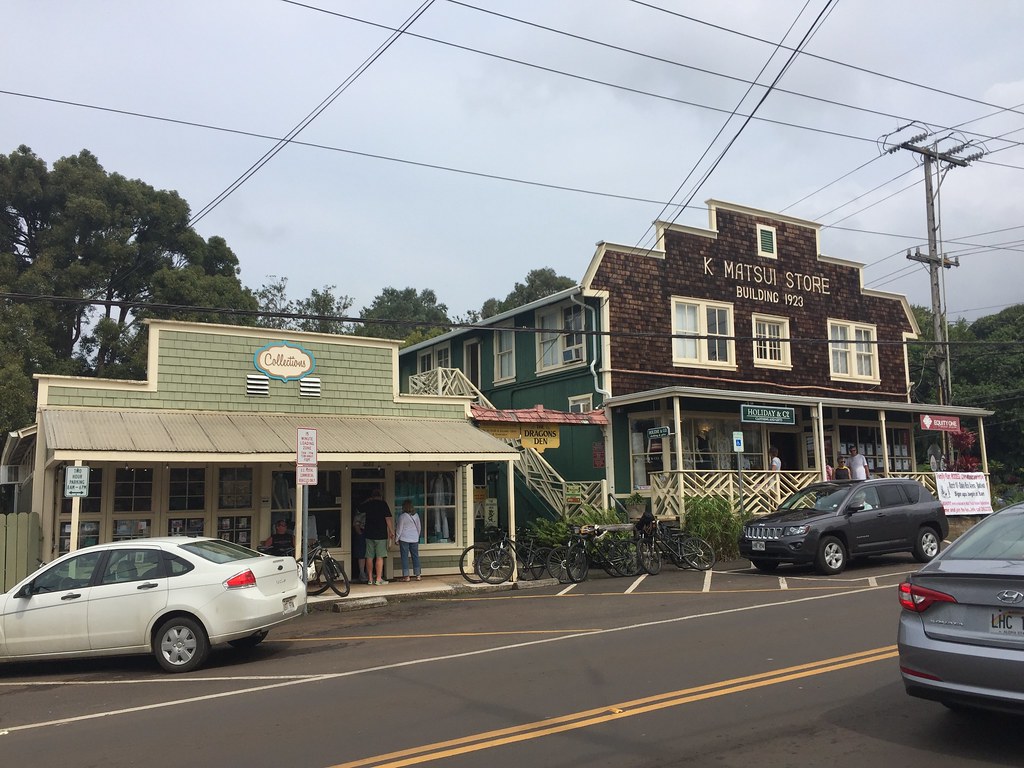 It's a sweet little town to stop in if you're driving around this part of the island. Very artsy and interestingly located on the mid-slopes of Maui’s Haleakala volcano.

From here we continued on to the North Shore, hoping to score a seat at the bar at Mama's Fish House but unfortunately they were packed full. We settled for some amazing views of the waves, rocks, and surfers. 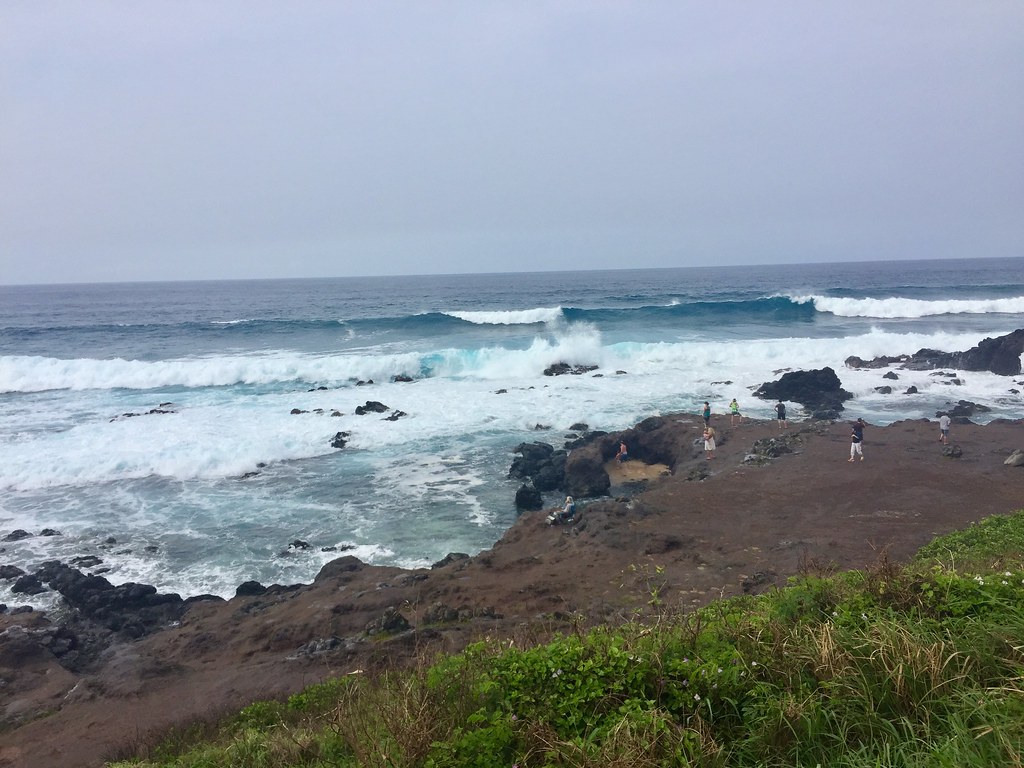 Back to Kaanapali we rolled up to the super old-school Kaanapali Beach Hotel and got seats at their outdoor tiki bar. This place is amazing in a John Ritter kind-of-way! 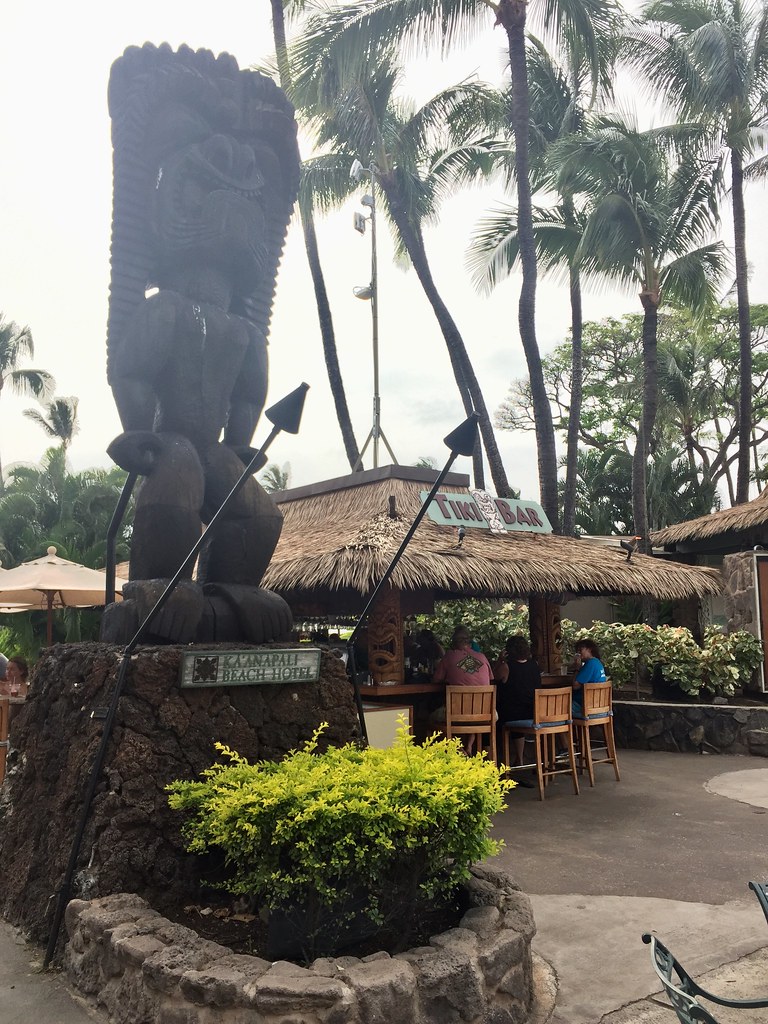 It was Happy Hour but the special is only on the drink of the day which was something like a tequila sunrise. We were there for tiki drinks! Two Tropical Itches were delivered to us by the man himself, Dale, complete with actual back scratchers. And a lot of dark rum! This place was a hoot! 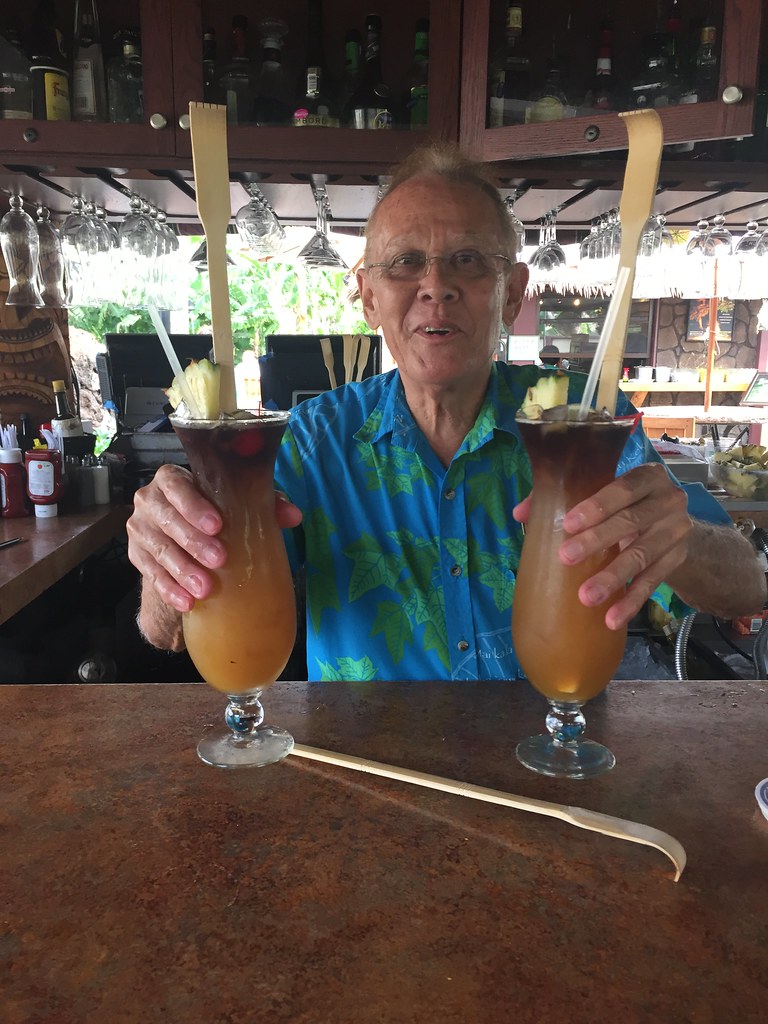 Judy decided to stay at the resort that night while I took the handy shuttle into Lahaina. I thought I might have dinner at Fleetwood's which a friend had recommended but as soon as I sat at the bar and ordered a drink, the noise and the ambiance completely turned me off. I felt like I was in a southern California strip mall. I basically was. So I walked down to my old stand by, Kimo's. This place is practically in my family history. 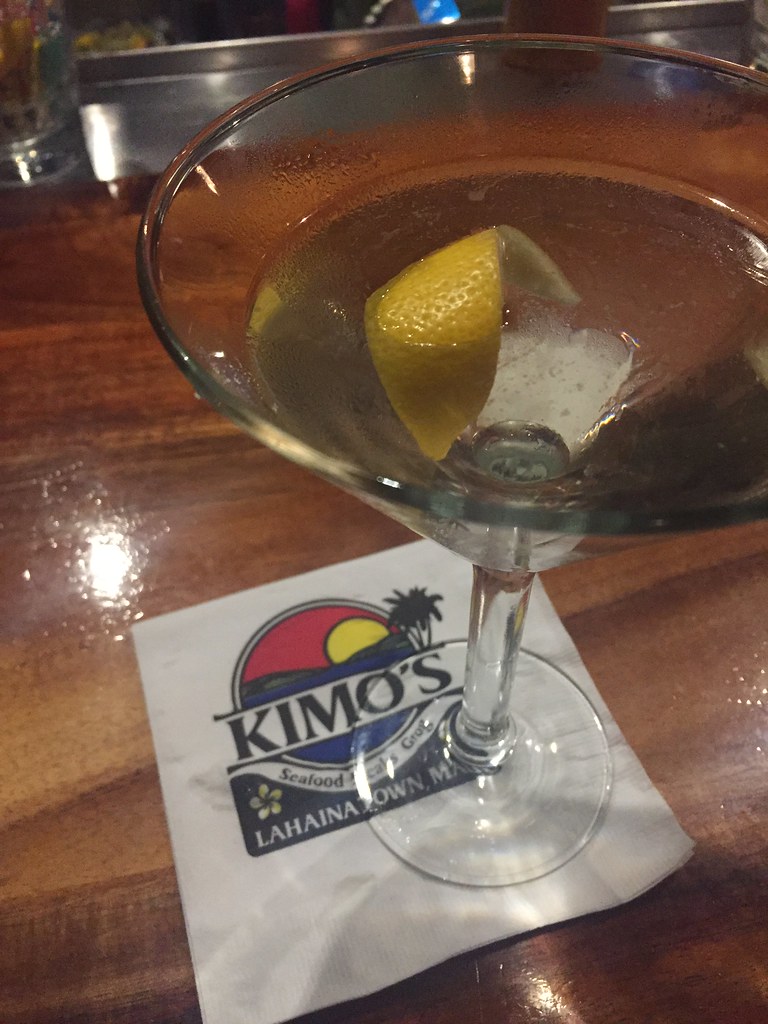 Dinner at the bar, which is open-air, sounds of the surf hitting the rocks, live local music, and fresh catch in a butter caper sauce. Delish! I took an Uber home after as I had just missed the shuttle and didn't feel like waiting around for the next.

The next morning Judy joined me again and we walked the opposite direction on the beach path. After breakfast and a bit of work for me, we met back up at our beach chairs and umbrella that we rented for the day at the low price of $40. The entire day was spent soaking up the sun, sipping on rose, swimming in the warm water, spotting a turtle close to shore and a lot of whales farther out! 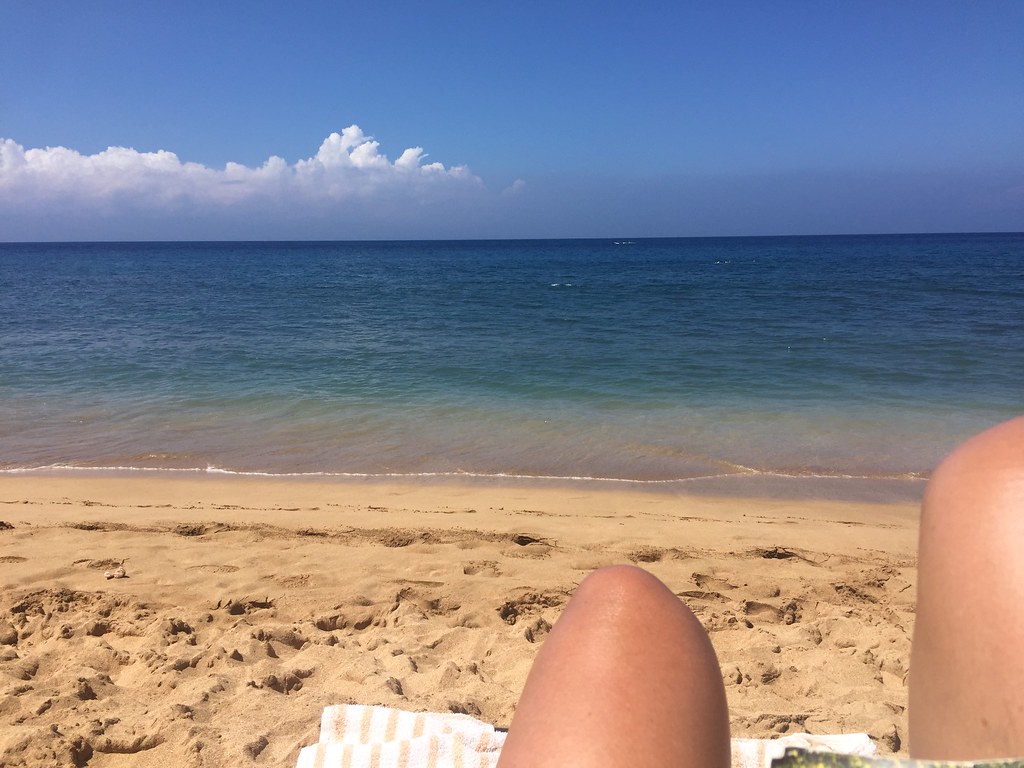 That evening I made us rum old fashions with pineapple garnish served with Maui potato chips for aperos. Cuz we are fancy like that! 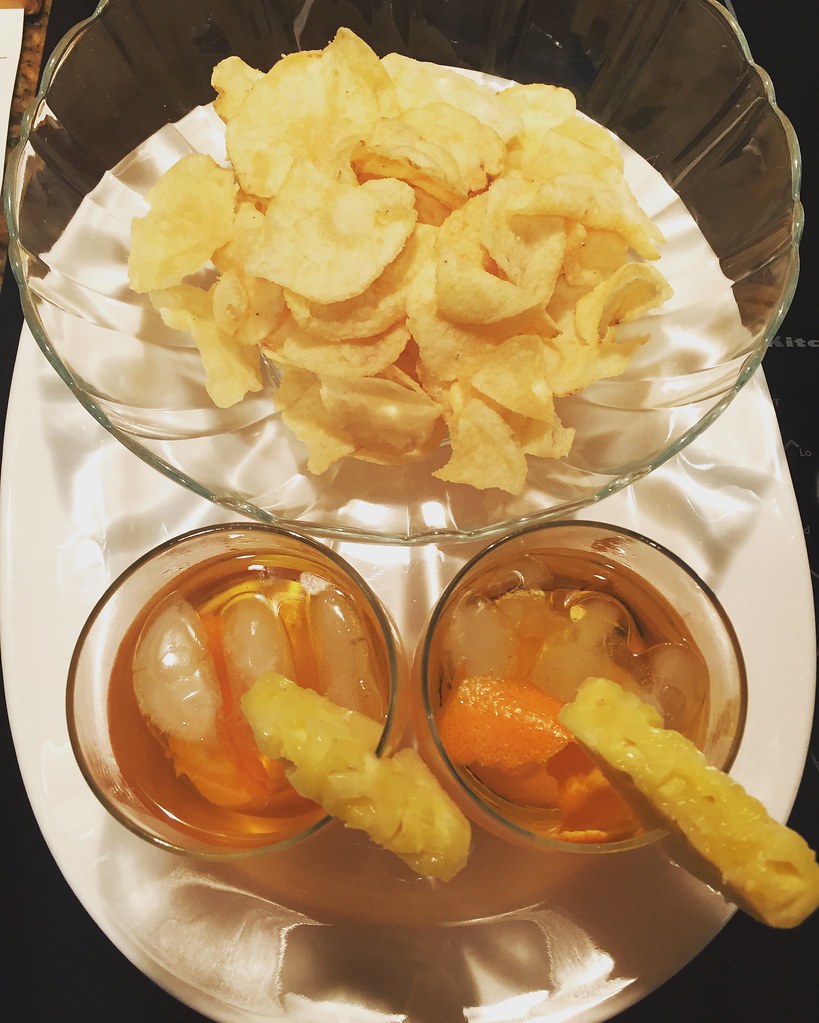 We grabbed the hotel shuttle to Whaler's Village and had drinks and dinner at the Hula Grill. The thing you are going for here is the beach-side atmosphere, of which there is plenty! Our server was also really great and as they are owned by the same group as Kimo's, he let me order the butter caper sauce on my fish even though that isn't on their menu. 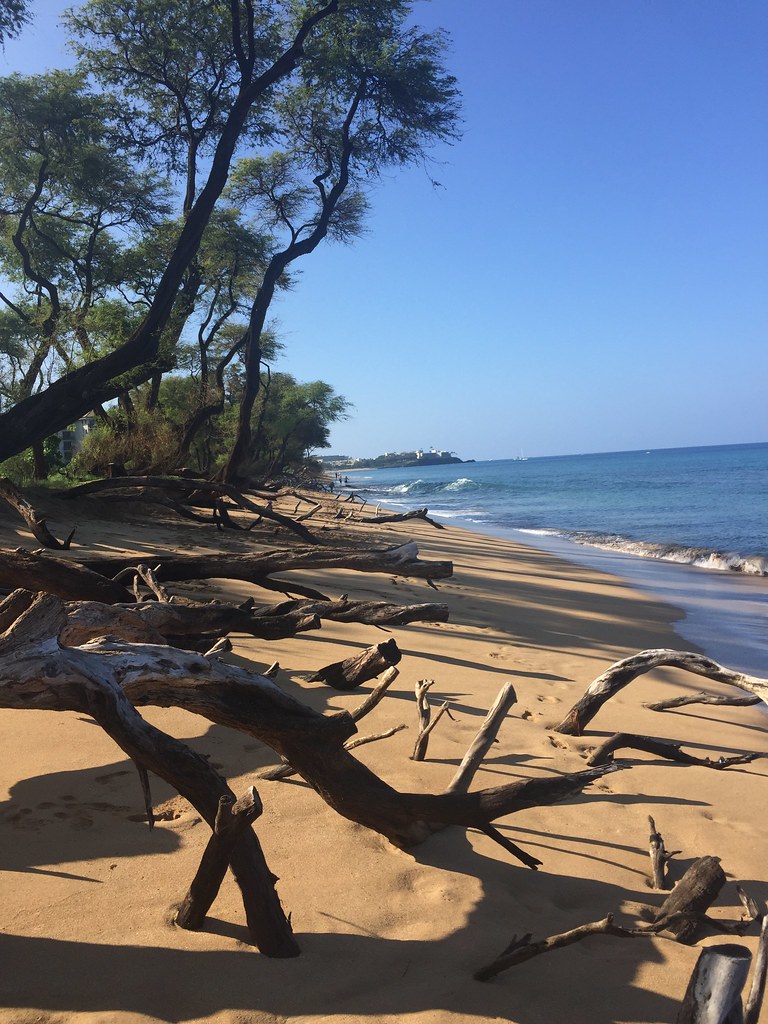 Saturday I took my run/walk to the beach where I had to jump over logs and avoid the tide coming in. It was such a gorgeous morning! After our Mimosa happy hour breakfast ($5 until 11 am!), Judy and I checked out the pool farther from our building. It's all black tile and felt a bit colder. I wasn't a fan even though the pool closer to us had a kid-attracting water slide in it.

It was time for lunch so we decided to get sandwiches and pie at Leoda's which is just delicious! On our way back we stopped at the Jodo Mission in Lahaina and walked around, checking out the Big Buddha (one of the largest outside of Asia) as well as the strange cemetery in the sand. 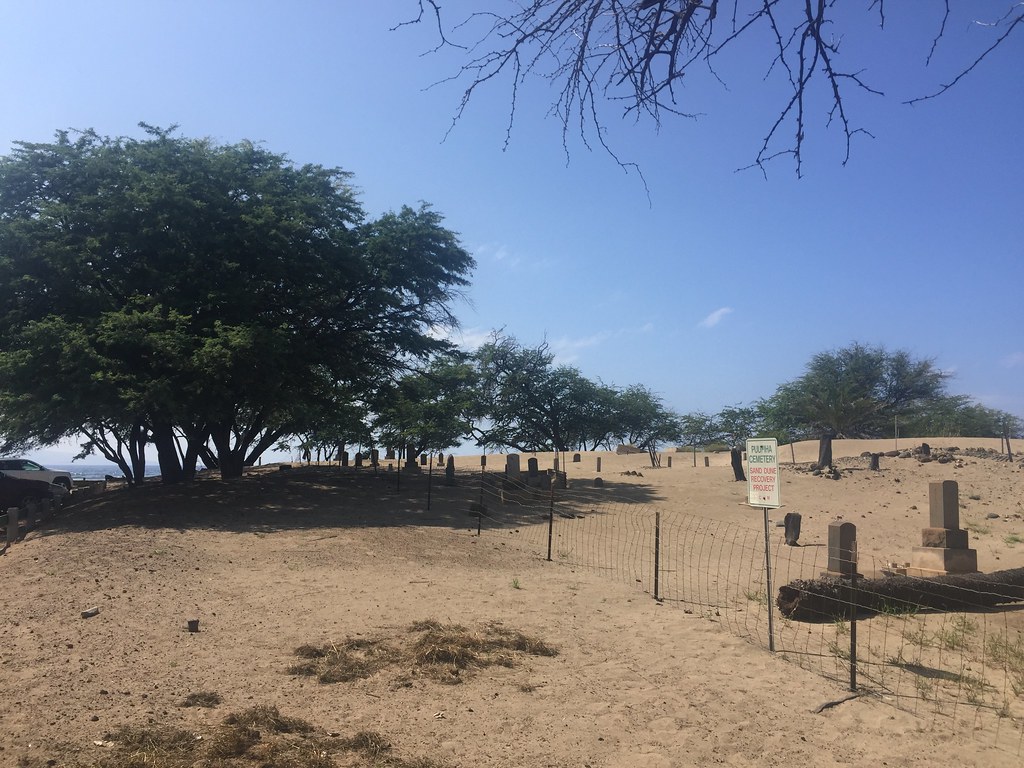 That night we chilled out at the resort: Happy Hour Mai Tais, the lighting of the tiki torches, another glorious sunset, and a pretty good dinner at the hotel.

Sunday morning's walk was quite special as there was a 400 lb Monk seal sleeping on the beach! Judy had seen it when she was up before dawn and it was still there when I went out at the more respectable 8am. 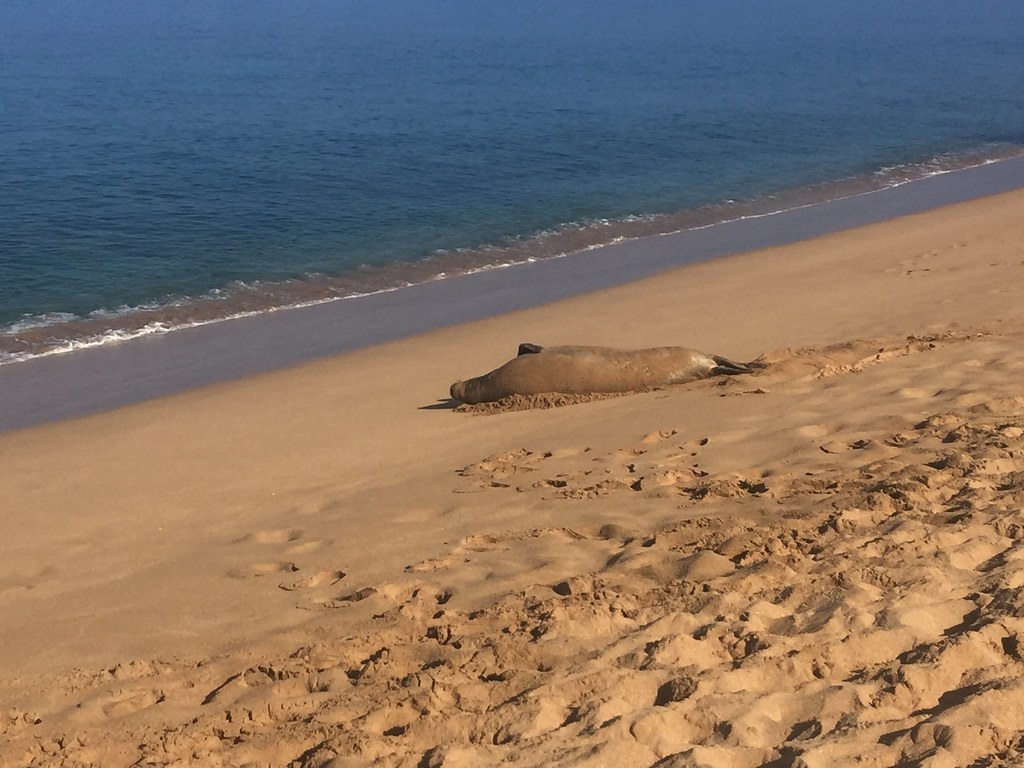 The Hawaiin Monk seal is one of the most endangered species in the world, only 1100 or so left. They are frequently caught up in fishing debris and drown, they were also hunted to the brink of extinction in prior years. Luckily this guy had a wonderful volunteer who roped off the area for him, allowing him to rest undisturbed, while she informed the onlookers about their plight.

Monk seals are especially rare in Maui as there are only about 150 of them around the main islands. It was fantastic that we both got to see this one and a wonderful start to our last full day!

We did a rinse and repeat day at the beach and I spotted even more whales than I had the other day! 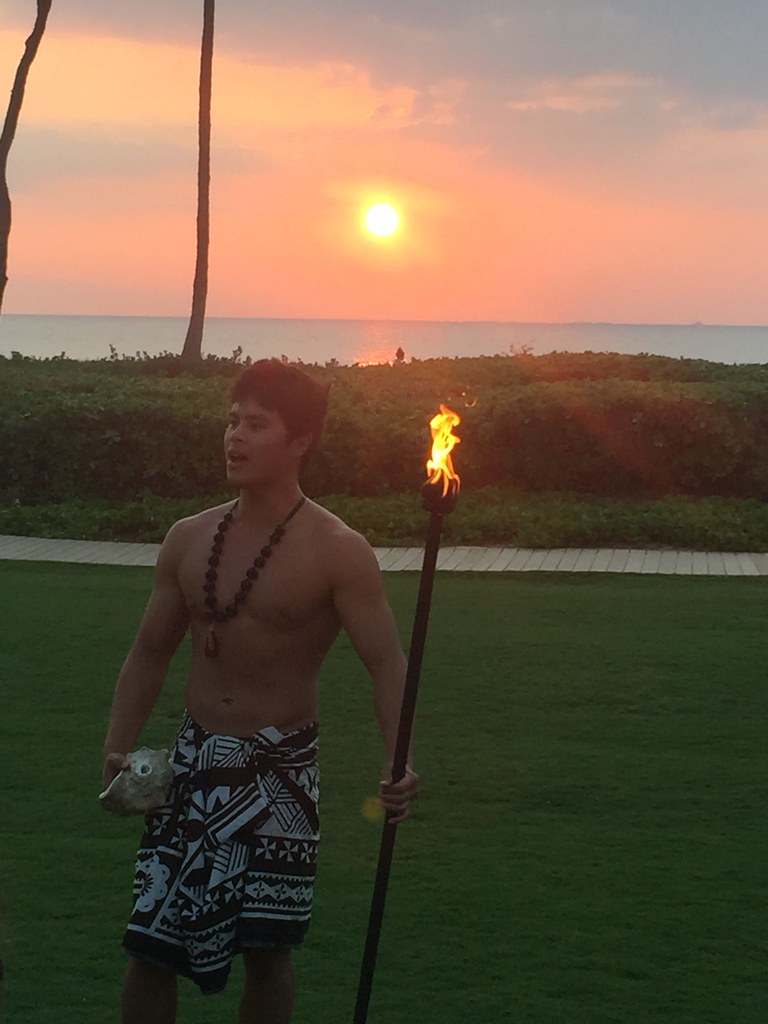 That night we went to Sansei Sushi in Kapalua, which strangely has a location here in Seattle! It was good, not great. 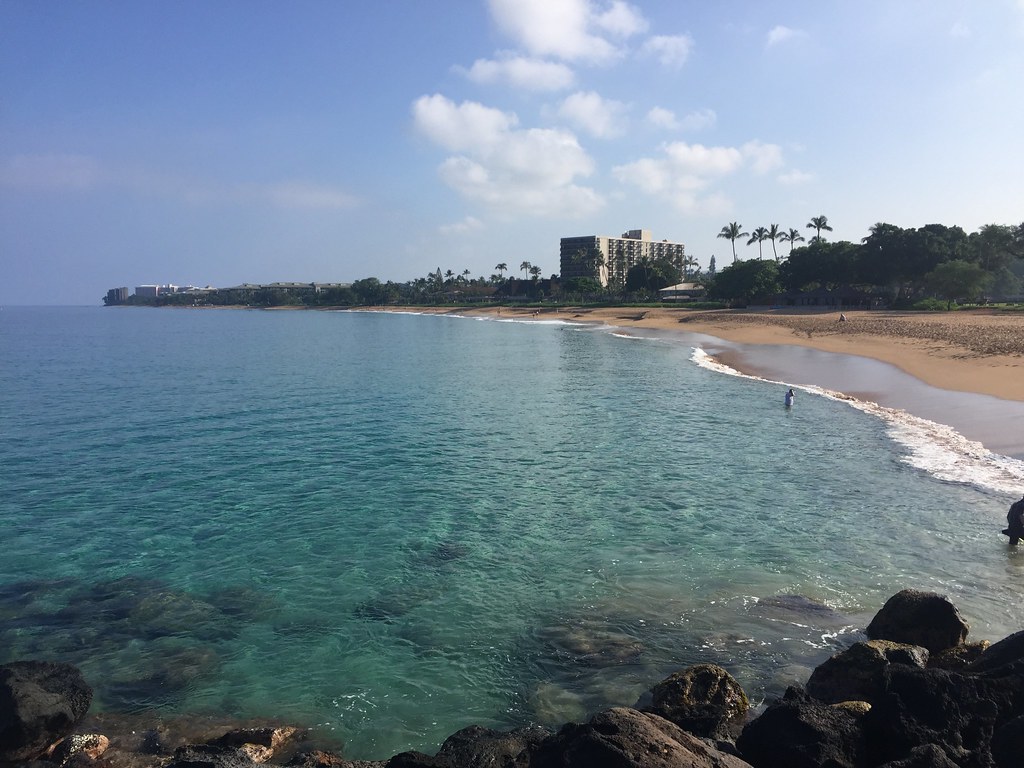 One last Mai Tai at the airport.

One last view of Maui. 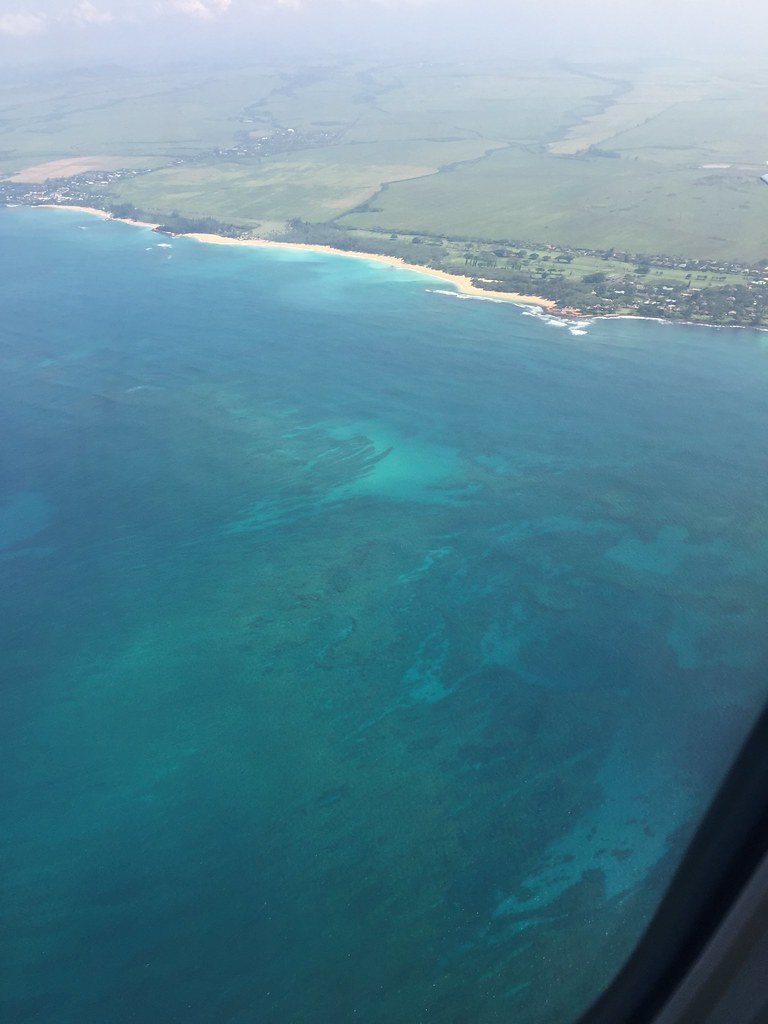 All Maui photos are here.