5 years ago I took advantage of a great 4-night Reykjavik deal thru Icelandair but until now I hadn't done the stopover program that they always offer. So coming back from Stockholm (more on that here) I decided to break up the return trip home with 2 nights in Reykjavik. 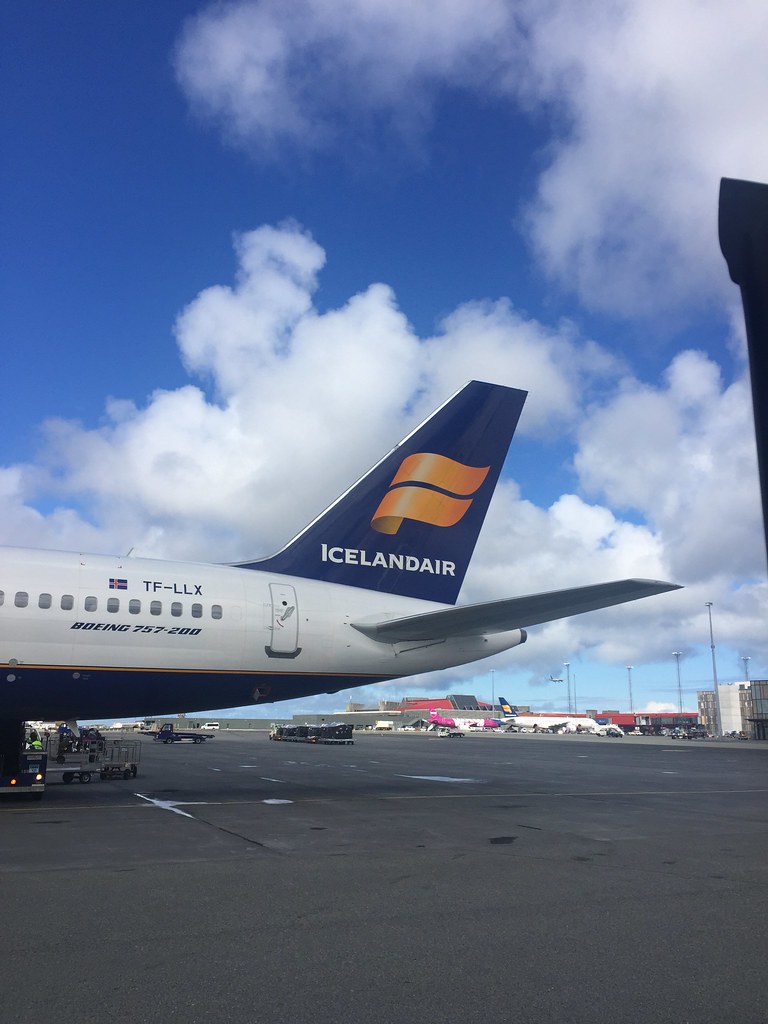 I flew Economy Comfort class on the 3-hour trip, which gives you access to the Saga Lounge at the airport, complimentary drinks/snacks on board, and each middle seat is "Reserved for your comfort" (empty) with a little ½ table inserted giving a bit more space. Add to this the exit row I chose and I had quite a bit of room! 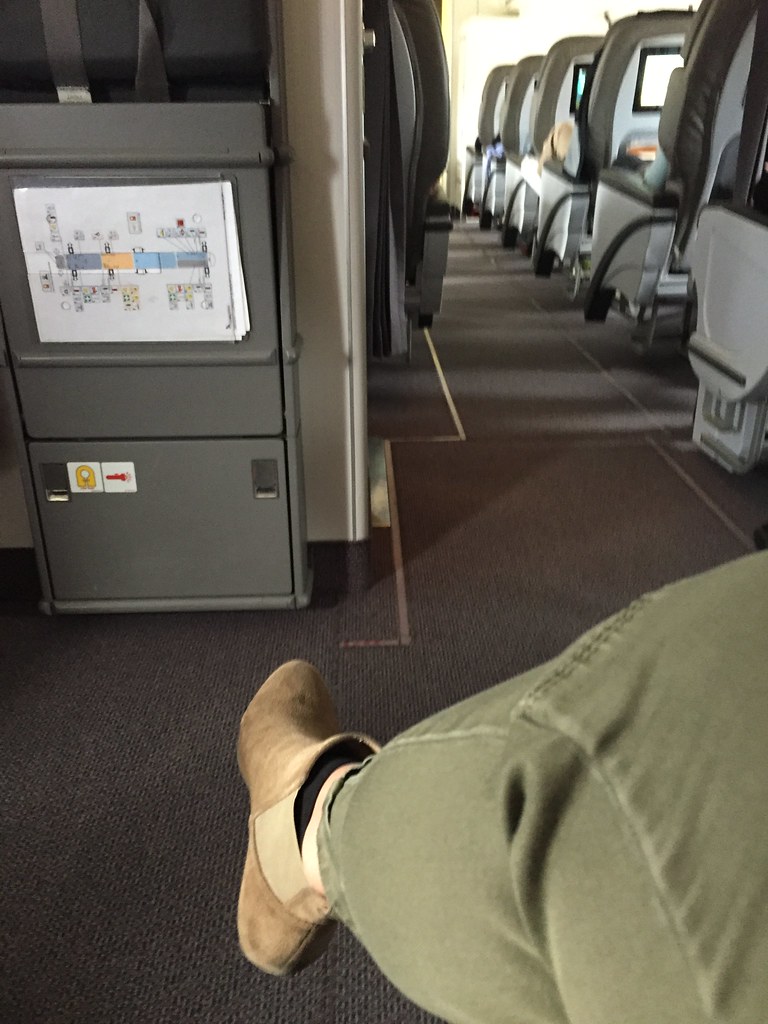 Once landed at KEF I boarded the Flybus which I had booked in advance online. It's a 45-min drive to Reykjavik and the bus has wifi and seat back chargers making it a comfortable way to go. It costs about $30 but I heard of someone taking a taxi which ran them $200! 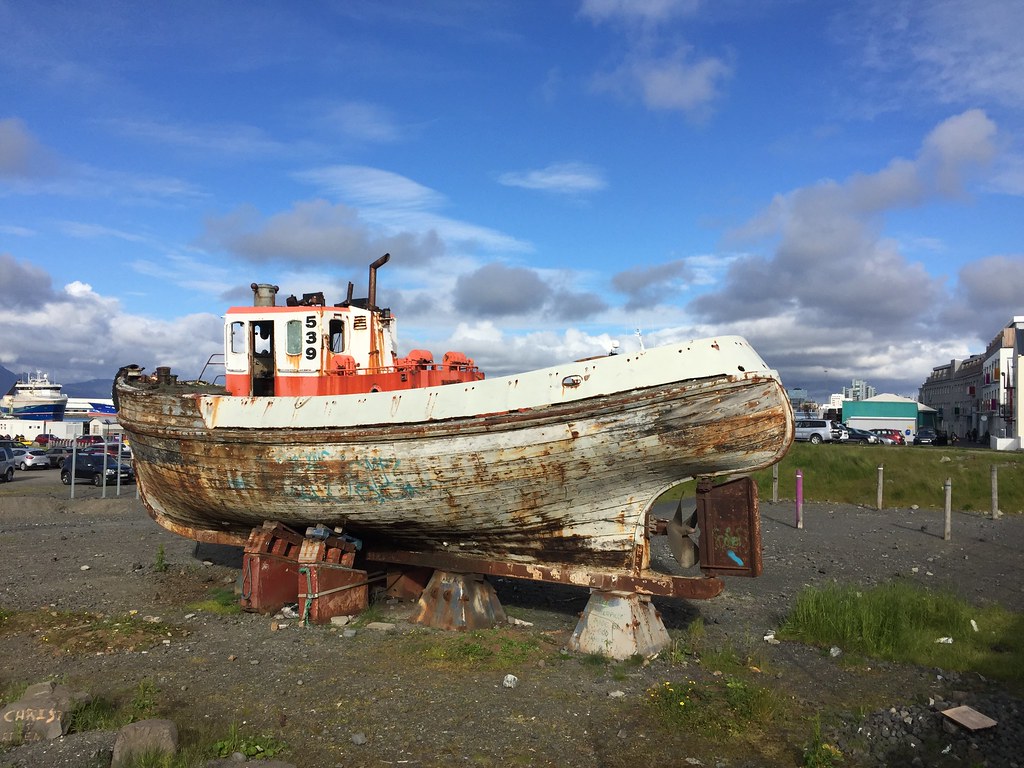 A quick transfer to a smaller bus at the city's bus terminal and then I was dropped off right outside my hotel, the Icelandair Hotel Marina. When I was here last, the marina seemed very far away from everything and was very industrial. It's still industrial but seeing that the city has grown so much there are lots of restaurants, bars, cafes, tours, etc. now. In fact, Reykjavik's best cocktail bar, Slippbarinn, is in the hotel (no surprise that I chose it right?). 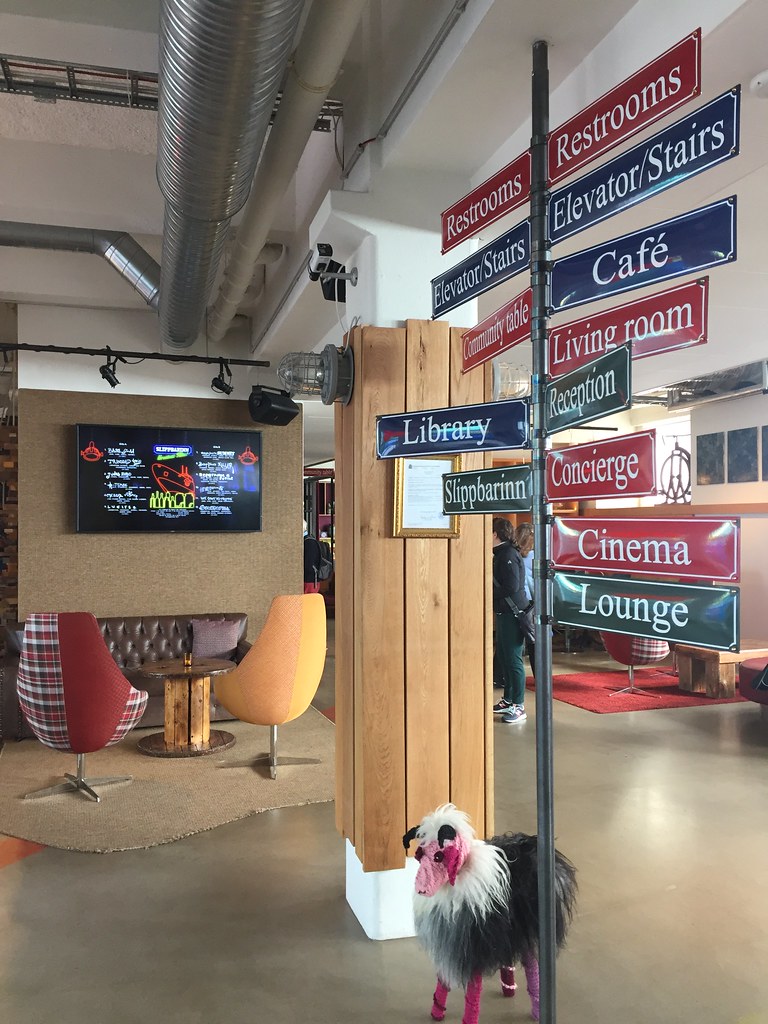 I checked in, dropped my bags in my very cute single room with a view of the harbor, and caught the last 30-minutes of happy hour in the bar.

It is very expensive to drink in Iceland as you may have heard. But let me give you a specific; a martini can go $29. So happy hour is a big thing. The waiter told me about the free app AppyHour which shows you the closest bars that are currently running happy hour. The bars seem to stagger them so you can make your own crawl out of it. 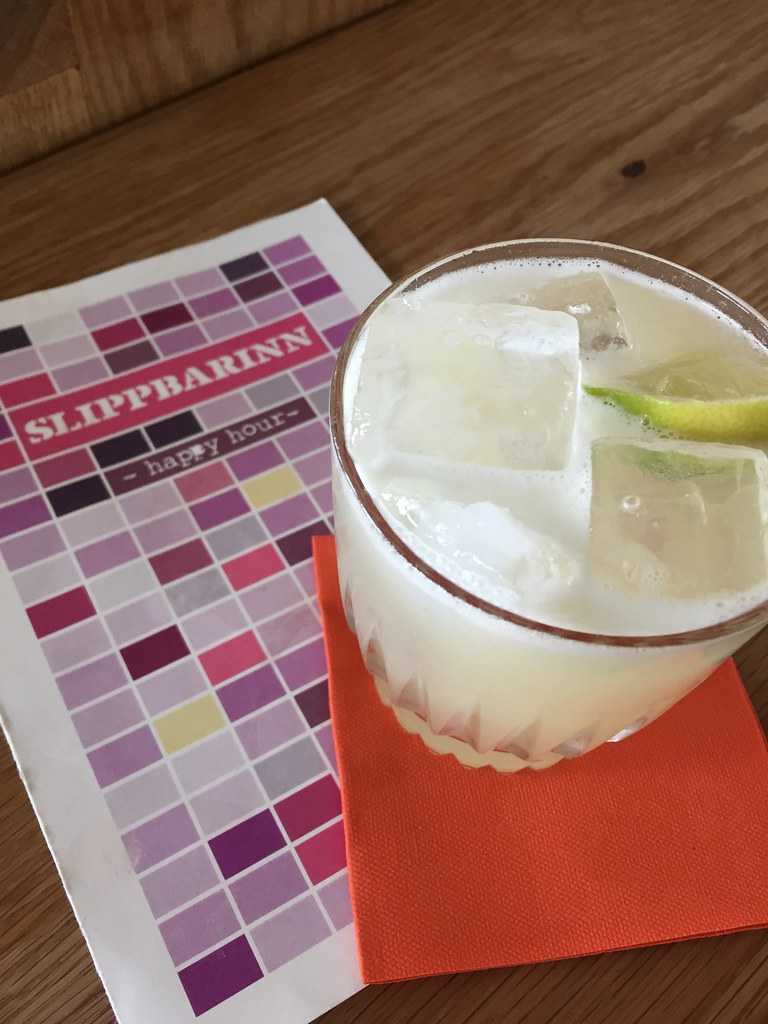 Not all happy hours are the same. At Slippbarinn they have a special menu of classic drinks, which was perfect for me; one Tommy Margarita for $12 please and thank you! Other places offer 2-for-1 or just beer or wine specials. The app generally has that information.

I then walked over to Matur og Drykkur for my dinner reservation. What a fantastic restaurant this it, I highly recommend. It is housed in an old salt fish factory; now a very cool, open kitchen concept, serving delicious modern Icelandic cuisine. 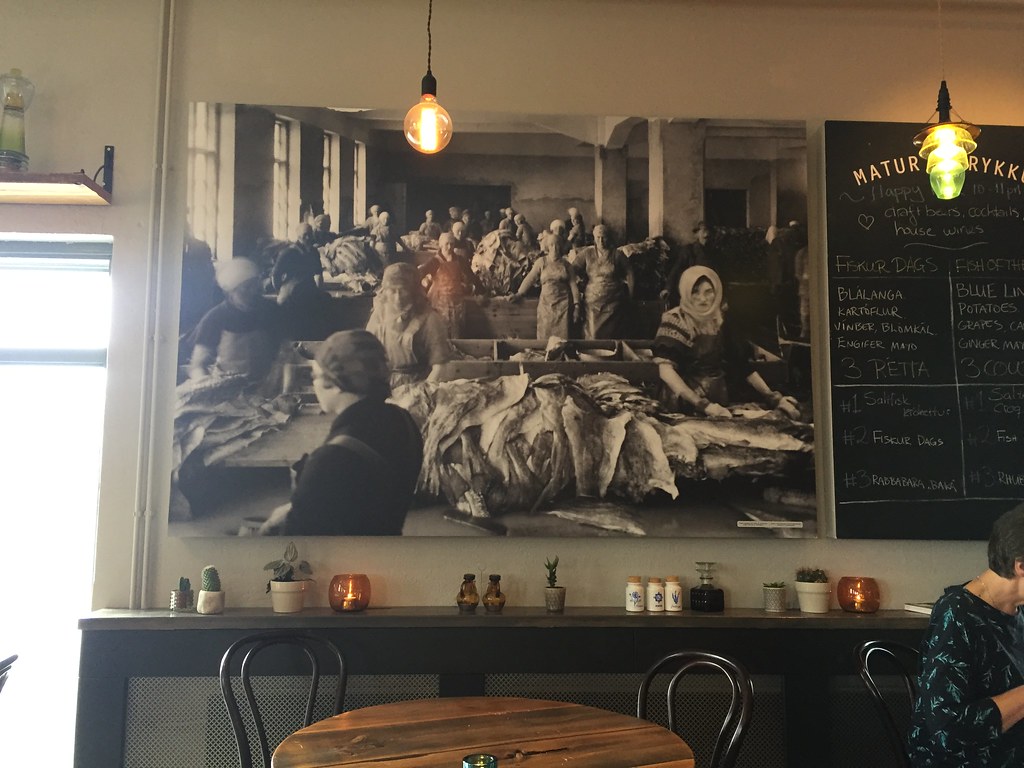 I started with a cocktail of Icelandic gin, crowberry, and thyme while looking over the menu which has both ala cart and set tasting menus (including a vegetarian option). I chose the Icelandic tasting menu with beverage pairings (cuz me!). 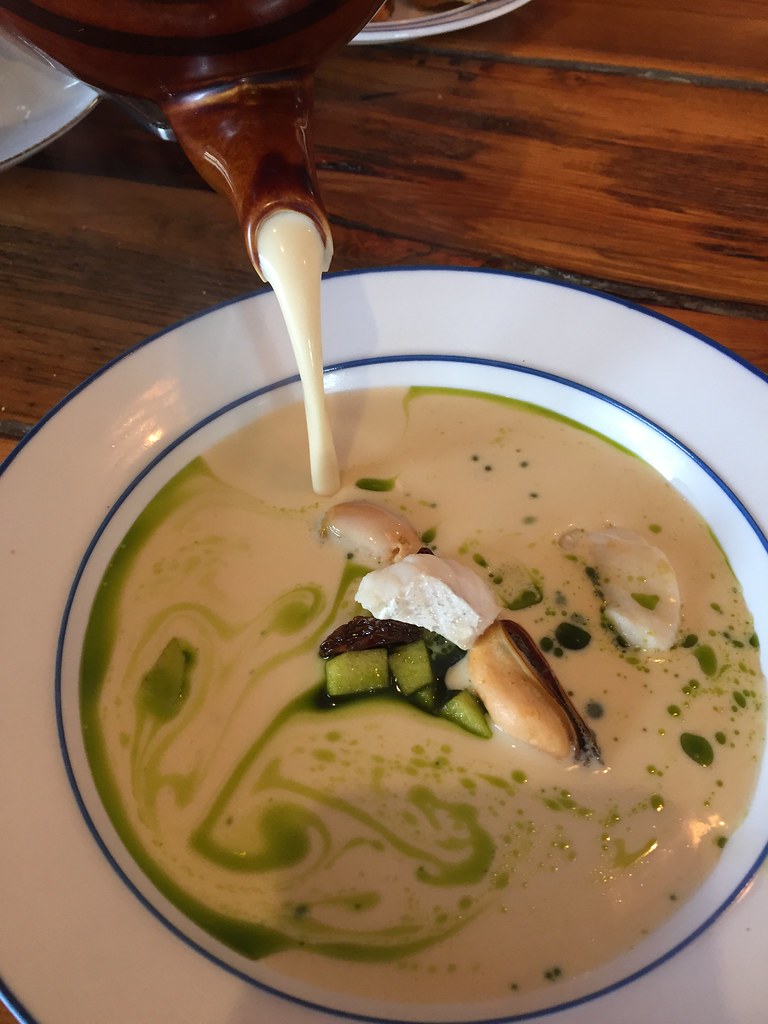 My first course was paired with a Brennevin shot (Icelandic aquavit) so I was immediately charmed. Everything was delicious but the stand out was the incredible soup of halibut, mussels, apples, and raisins. I thought the wine pairings were also quite good (they can also mix in beers) and the waiter even treated me to a tasting of crowberry and birch liquors on their own as well as an Icelandic Old Tom gin. As I ate I enjoyed watching the chef plate everything right in front of me. 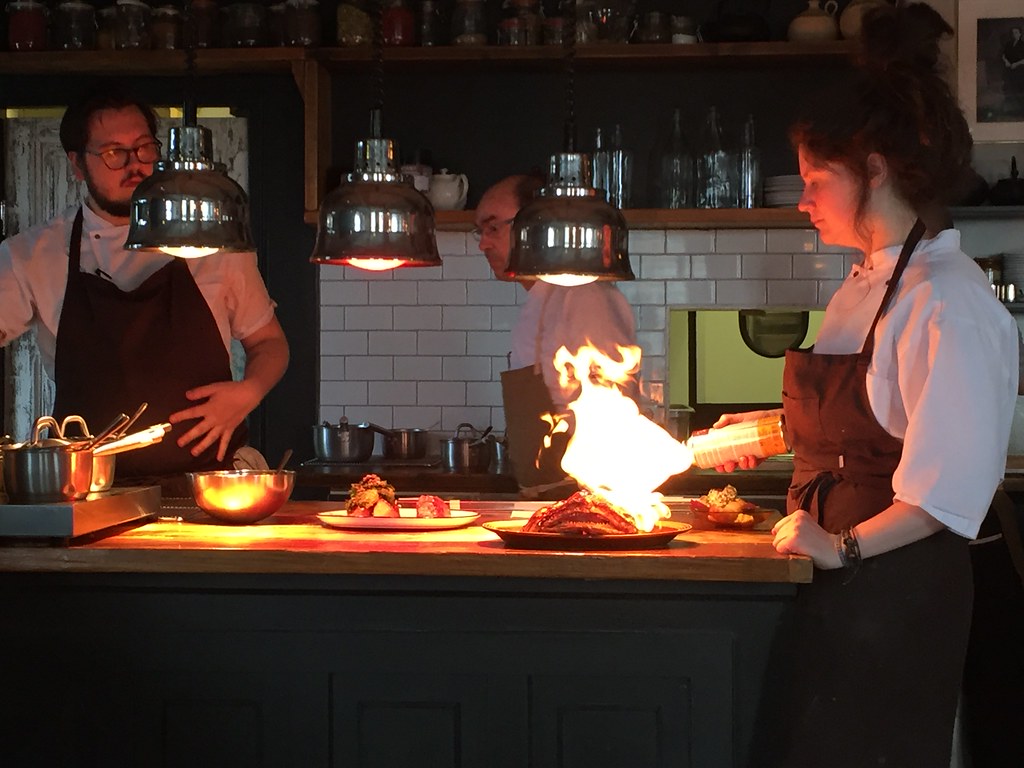 M og D isn't cheap but it also wasn't gimmicky, the ingredients were local and awesome, and the service was fantastic. It is casual (cuz Iceland!) but it was nice; I loved it! I also loved walking home in the midnight sun! 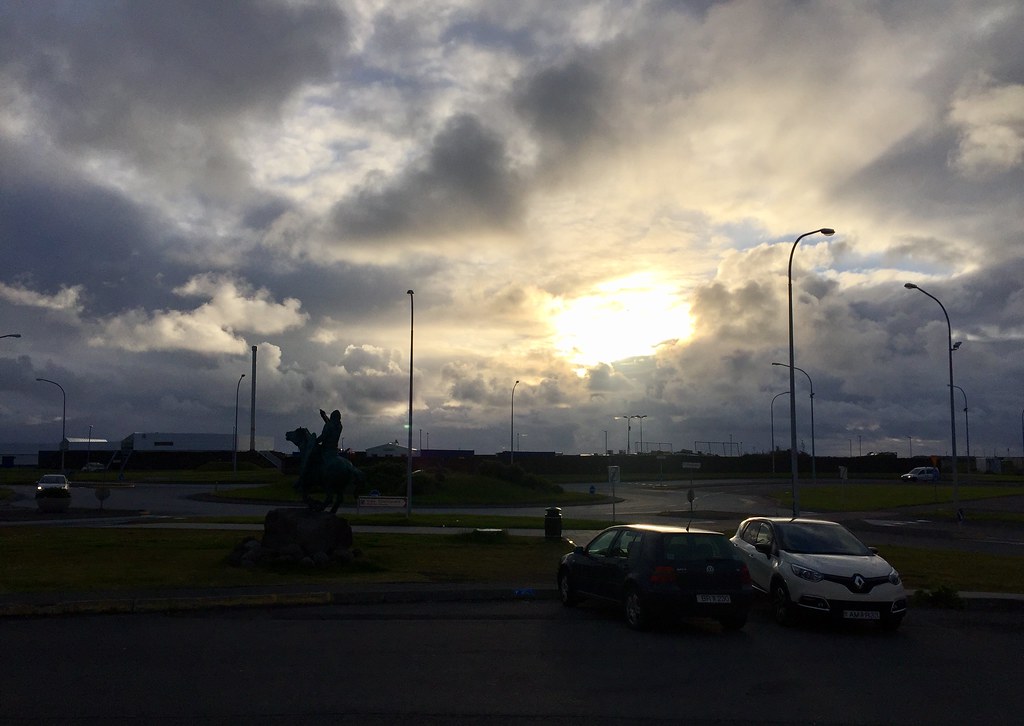 One thing I noticed on this trip was the campaign against having whale on restaurant menus. There is even a sticker you can look for on doors that says "Meet Us Don't Eat Us" which signifies a restaurant choosing not to serve whale. Full disclosure, I have eaten both whale and puffin in Iceland in the past but I liked that the city is getting away from using this as a touristy thing and fully support it.

The next day was my one full day to play and I made the most of it! I got up, had a great smorgasbord buffet breakfast in the hotel and walked all of 2 minutes onto the pier to catch my Puffin Express Tour with Edling Tours. This boat goes out at 9am, 30 minutes before any other tours, and because it is a zodiac boat it can get much closer to the island than the regular boats. Cherry on top, there was just one other couple on my trip so the 3 of us had Captain Axel and bird watching expert Corrina to ourselves! 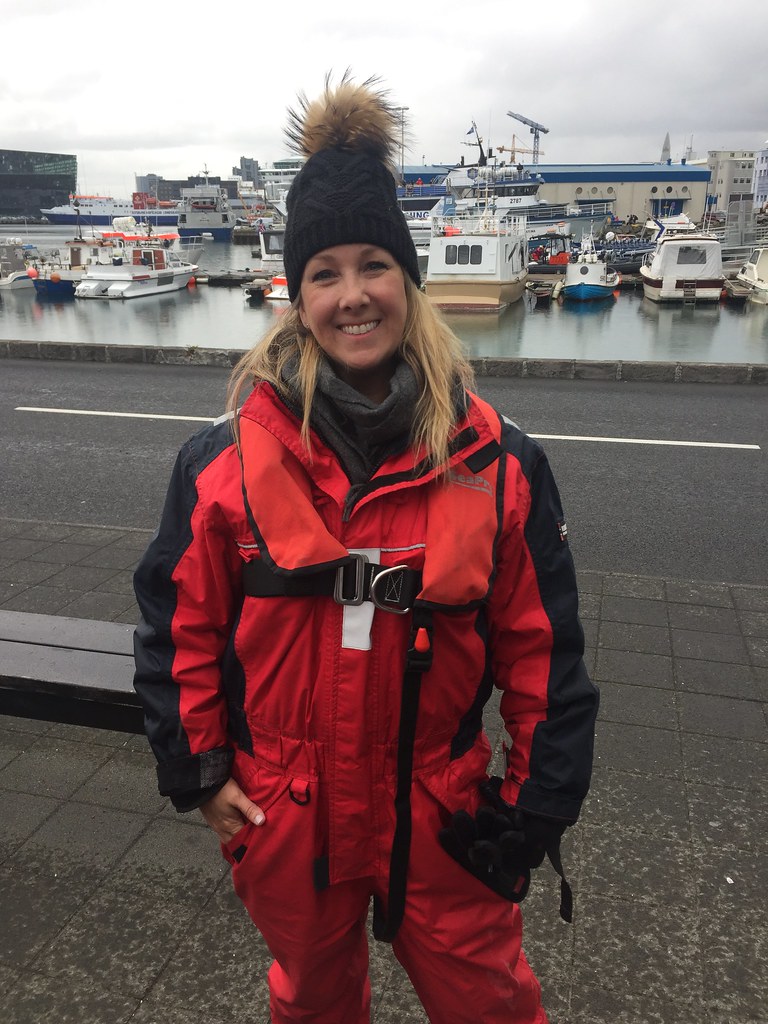 We were provided survival suites (which were nice and toasty), binoculars, and gloves (which I never needed). There were no other boats when we left the harbor for the island; it was quiet and beautiful on the water. Puffins are really small so even though we were close, you really needed the binoculars or a serious camera to see them. And they are super cute! It was hatching season so there were many protecting their nests, normally they hang out in the sea. 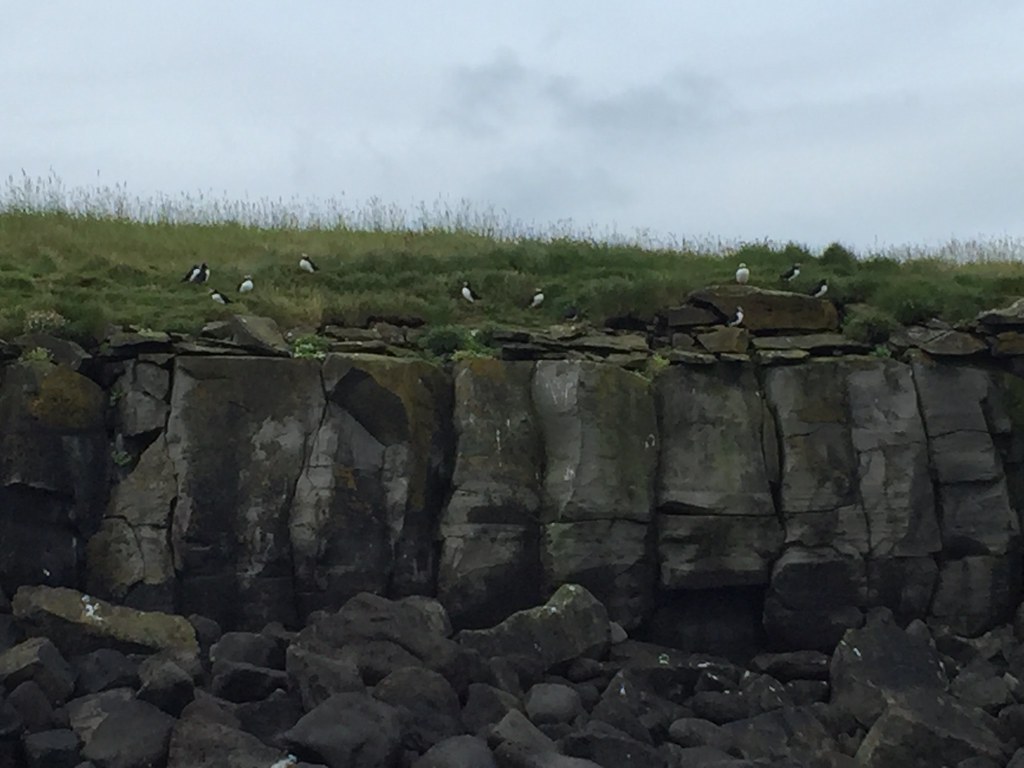 Yea, puffins! The tour was an hour and we cruised around the island a bit before heading in. I had booked this online the day before but on busy weekends you probably want to book more in advance. They also have an afternoon whale watch you can add to it.

Afterward, I went for a nice walk thru town and did some shopping, not on Languverin as most guidebooks would tell you but on Skolavoroustigur. Here you'll find a cool deli selling Icelandic cheeses, jams, etc, the Handknitting Association store which sells 80+% local crafts, some cool design shops, and a few souvenir stores; all in the shadow of the Hallgrimskirja (cathedral). 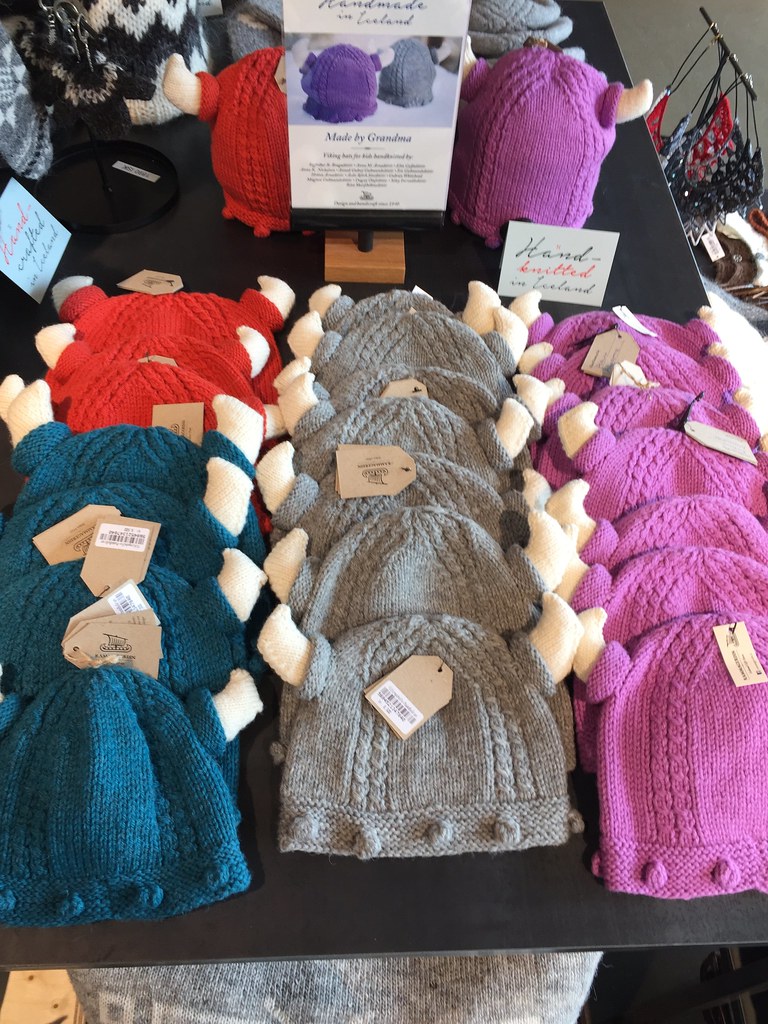 I went to Loki Cafe for lunch and chose the Iceland #2 plate which has smallish servings of smashed fish and smoked trout on house rye, bean salad, and mashed turnip. It was good but others had the soup which looked and smelled *really* good. If you go I'd get the later. All with a great view of the church. 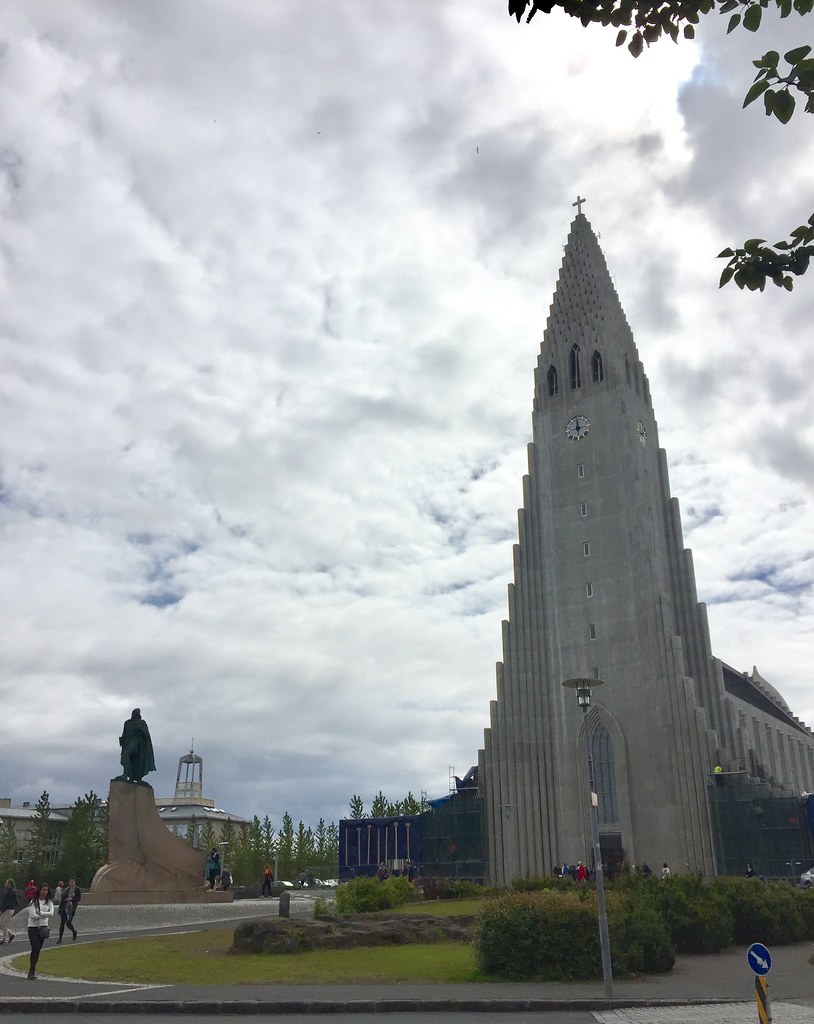 That afternoon I had booked an Icelandic horse ride with Ishestar. After being picked up and taken to their stables, I was outfitted with a helmet, offered rain gear, and introduced to my horse. 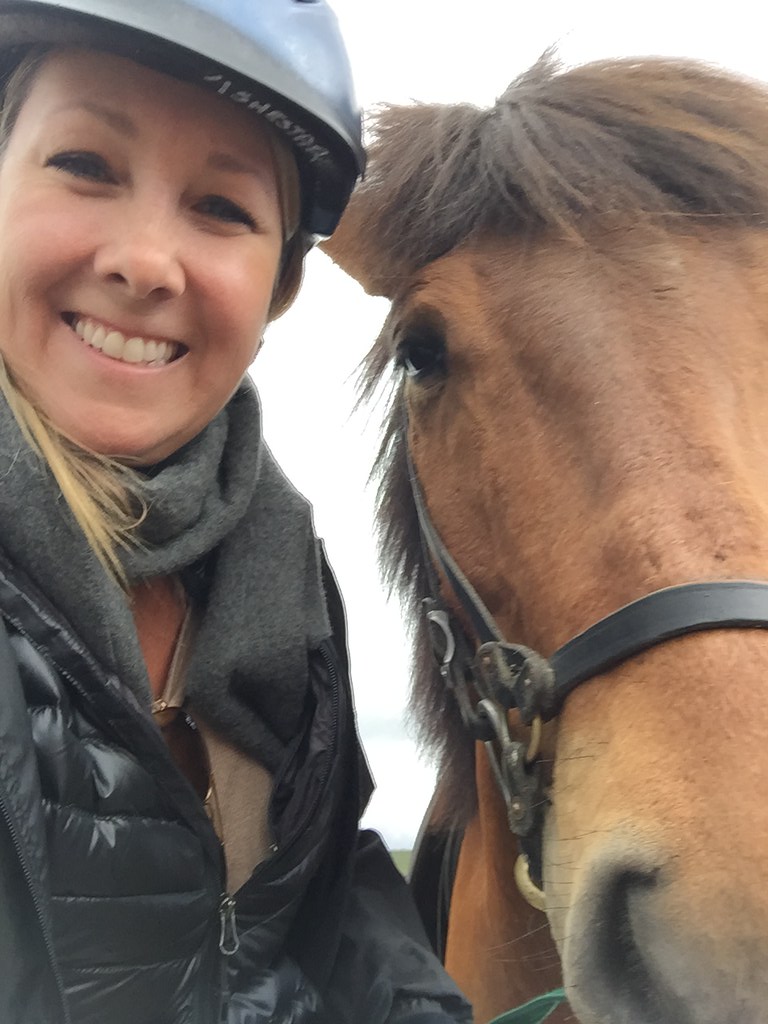 We took our horses on a 1 ½ hour ride through some absolutely beautiful lava flow scenery; wildflowers perfuming the air and mountains rising in the background. 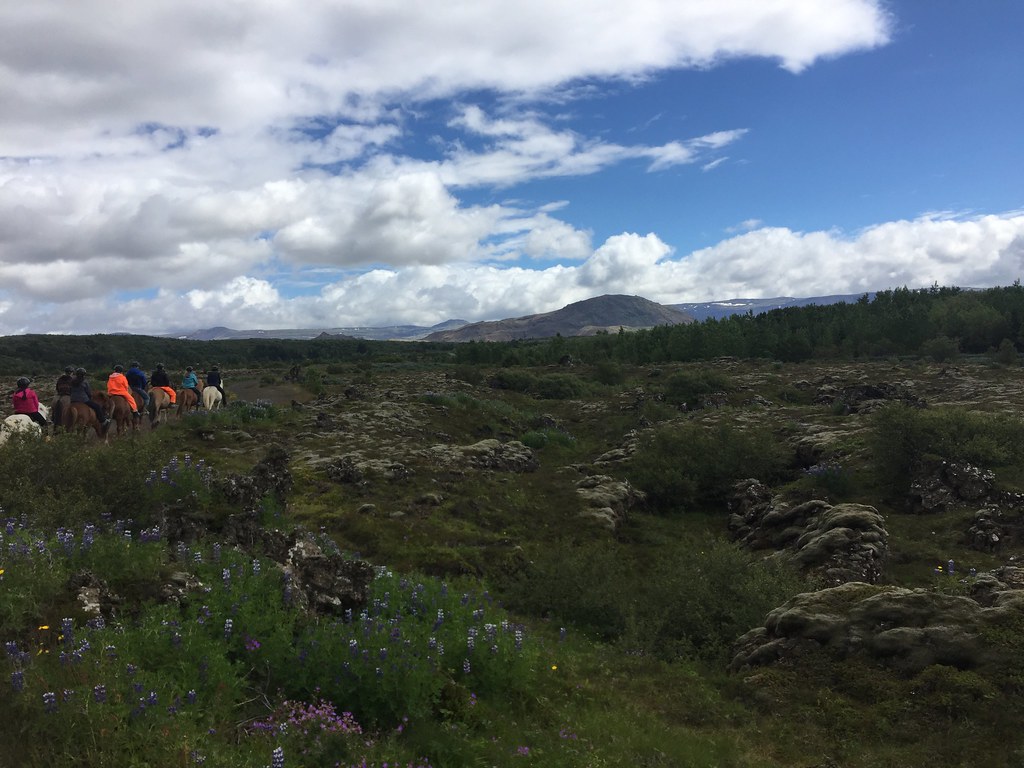 The only thing I didn't like about the ride was that you had to choose either a slow walk or a faster trot/tolt group which was for riders with at least 15 rides under their belt. As I have maybe 5 rides under mine I stuck with the slow. It would have been nice near the end to be given the option of trying the tolt or at least seeing a demonstration of it. So if you are keen to ride horses, you might want to inquire to your tour if this is something that is available. And for those of you who are considering horseback riding in Iceland and you don't know what tolt is... WTF? Go see the puffins! :) 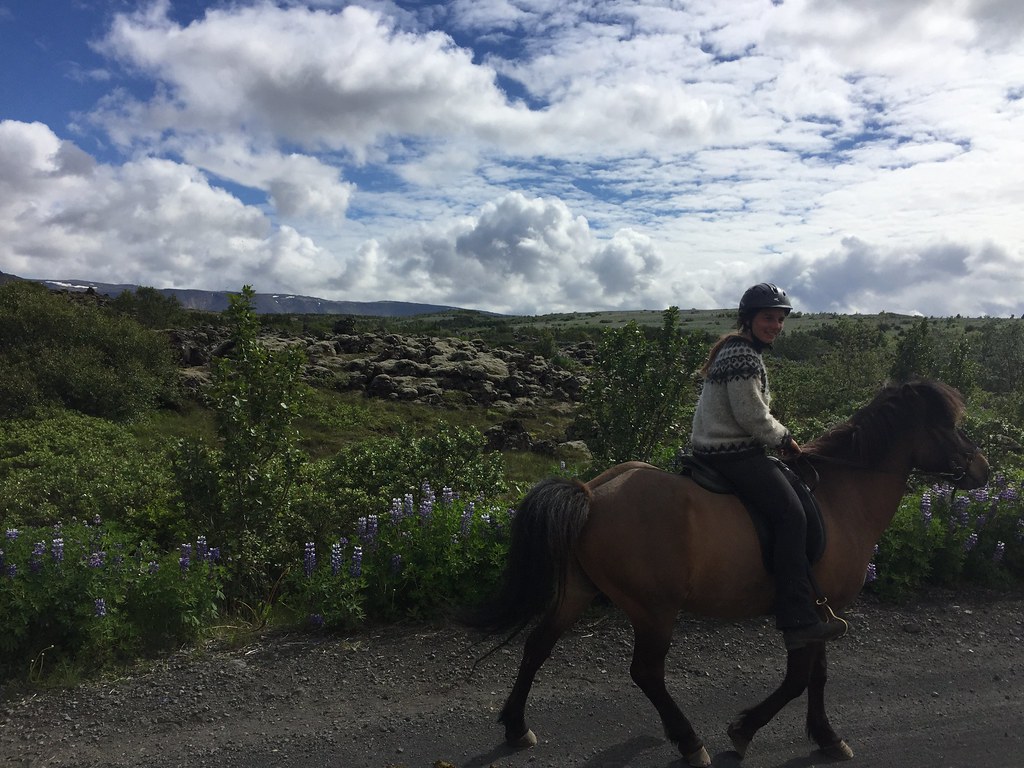 After happy hour at my lovely Slippbarinn I walked to Pablo Discobar for a drink. It was still early so no true nightlife yet but the drinks were good and the 3-story Latin restaurant/bar was fun. It started absolutely dumping rain so my plans of a cocktail crawl were squashed as I had left my raincoat with hood back at the hotel. I made my way back to the waterfront by ducking under each building awning on my way to Kopar Restaurant. 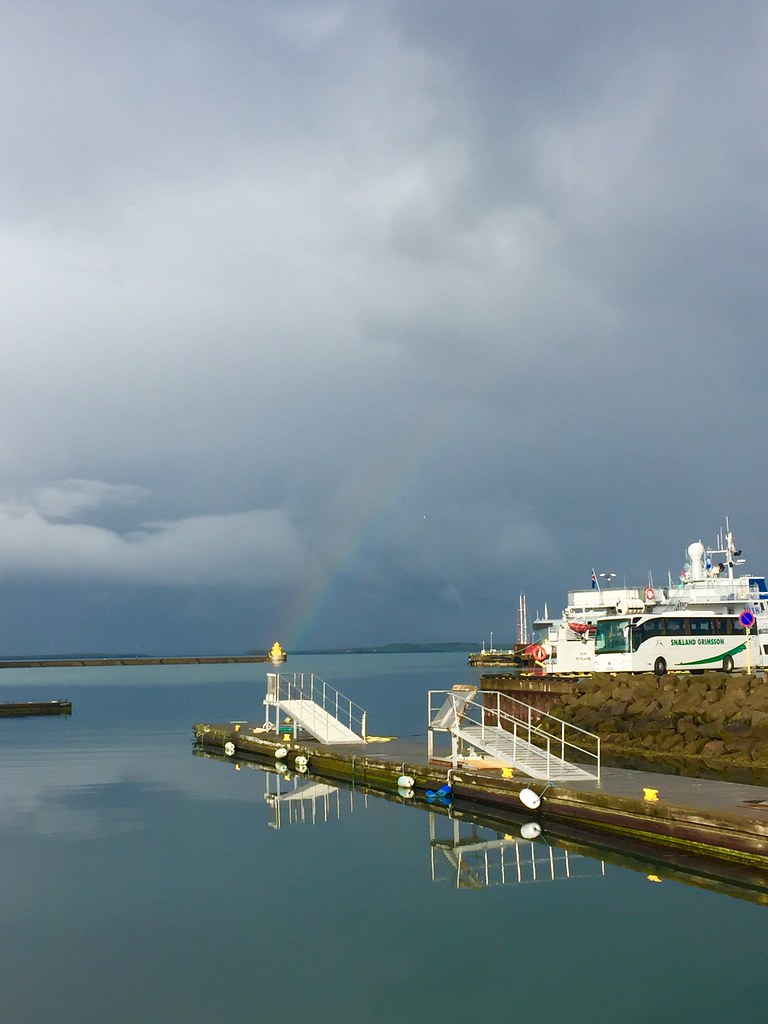 Kopar is right on the water and has a really cool appetizer tasting menu for about $60. You get 6 app-sized courses and a glass of champagne. All were great, the rock crab soup being a major stand out (what is it with Iceland and their soups?) and the waiter was sweet and comped me an additional glass of white wine with my meal. I really liked this restaurant which was a recommendation from my friend Kel and thought the appetizer tasting menu was a great idea! 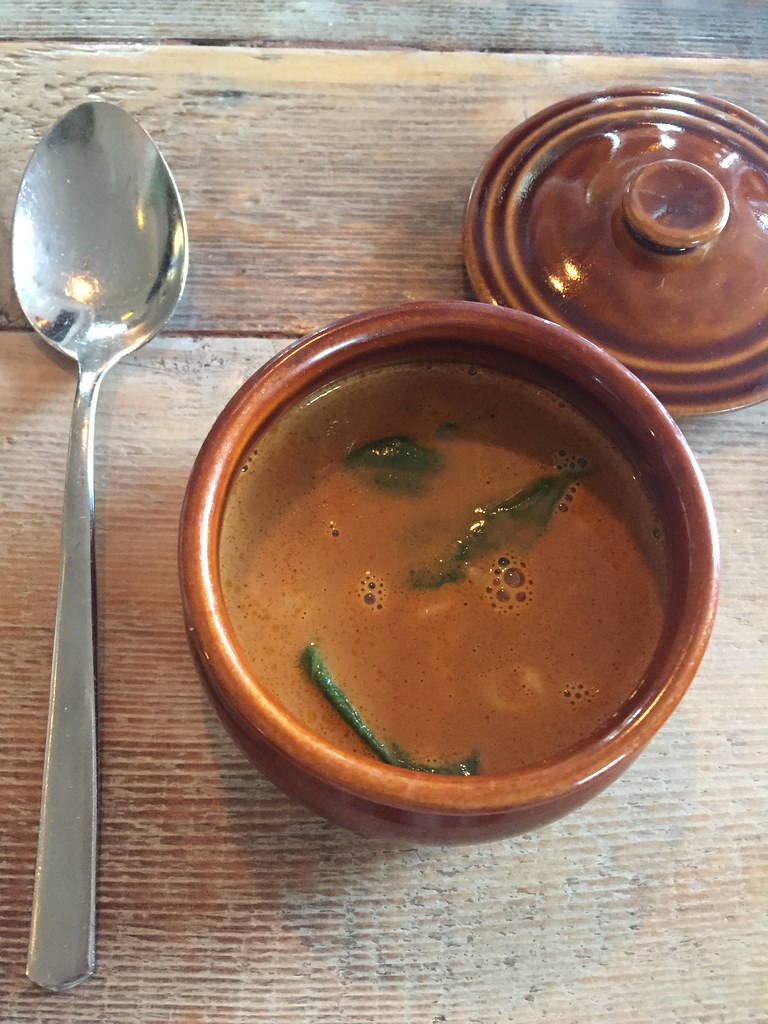 I stopped in my bar for a nightcap, or should I say brightcap?  The sun didn't set each day until midnight and rose at 3am, with hardly even dusk in between. This was such a bucket list thing for me to experience that I was super excited by it, and also happy to have blackout blinds in my room! 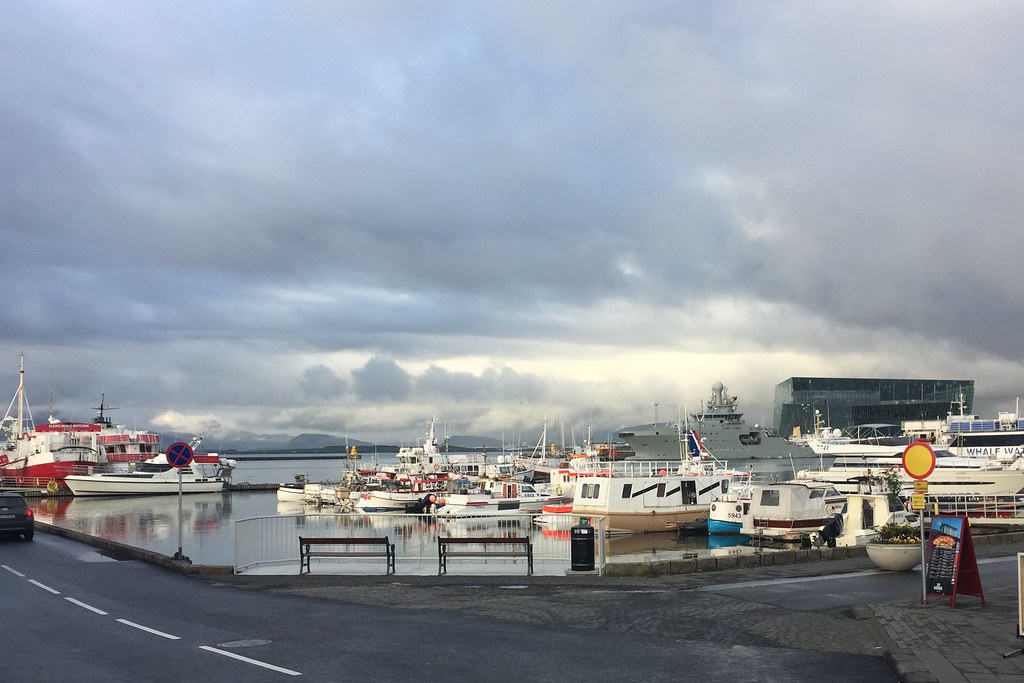 The next morning I chose the breakfast option at the cafe connected to the hotel, instead of the buffet (both were included in my room price thru Booking.com). Skyr, latte, avocado toast, cheese, fruit, croissant... delicious! 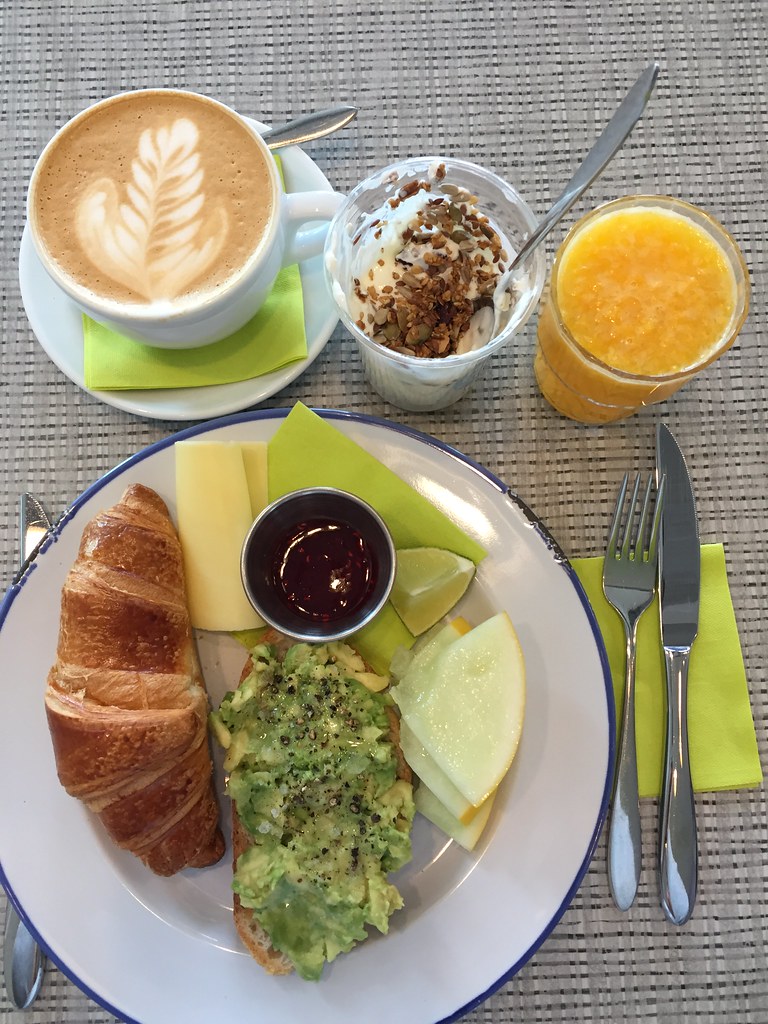 I took one last walk around town then down to the beautiful Harpa Concert Hall and along the water to the Sun Voyager sculpture. 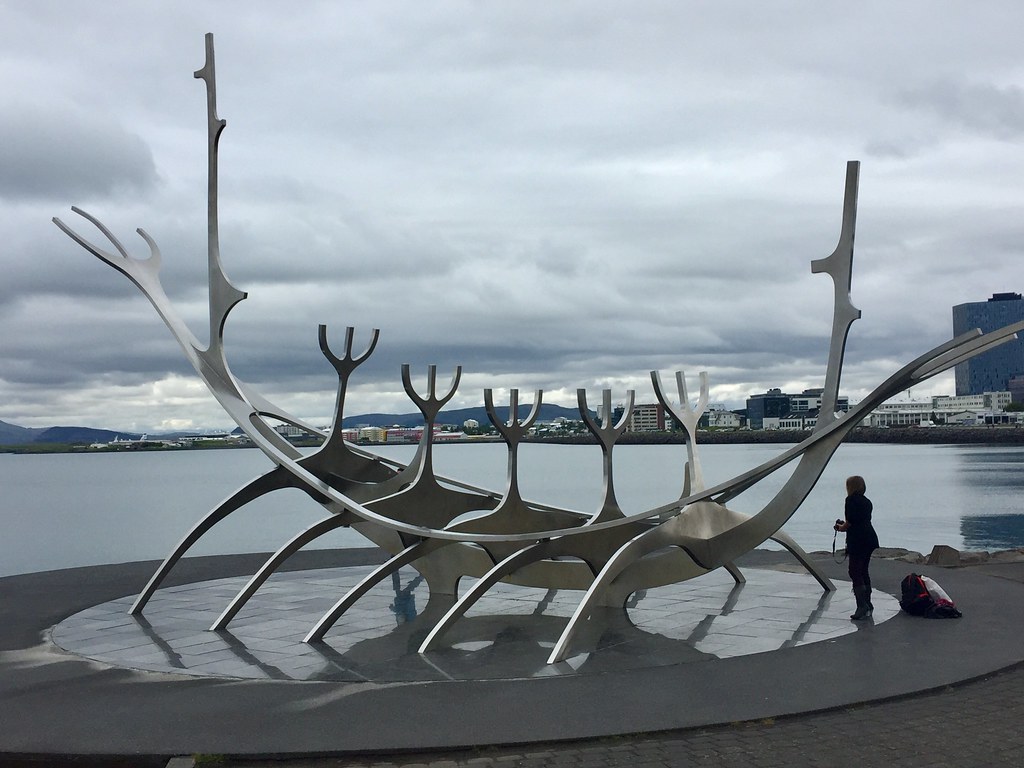 There is so much construction going on I felt like I was back in Seattle! I was told there is a 5-star hotel under construction across from the Harpa and the area is a huge mess. Reykjavik is certainly going through some growing pains and I have to say that I missed the small simplicity that I experienced in the past.

That isn't to say I don't still love Iceland, but now you need to book your Blue Lagoon 2 months in advance (I couldn't get a reservation) and the Michelin starred Dill restaurant is booked 3+ months out. So it's more of a normal city which requires advance planning than what I experienced before. 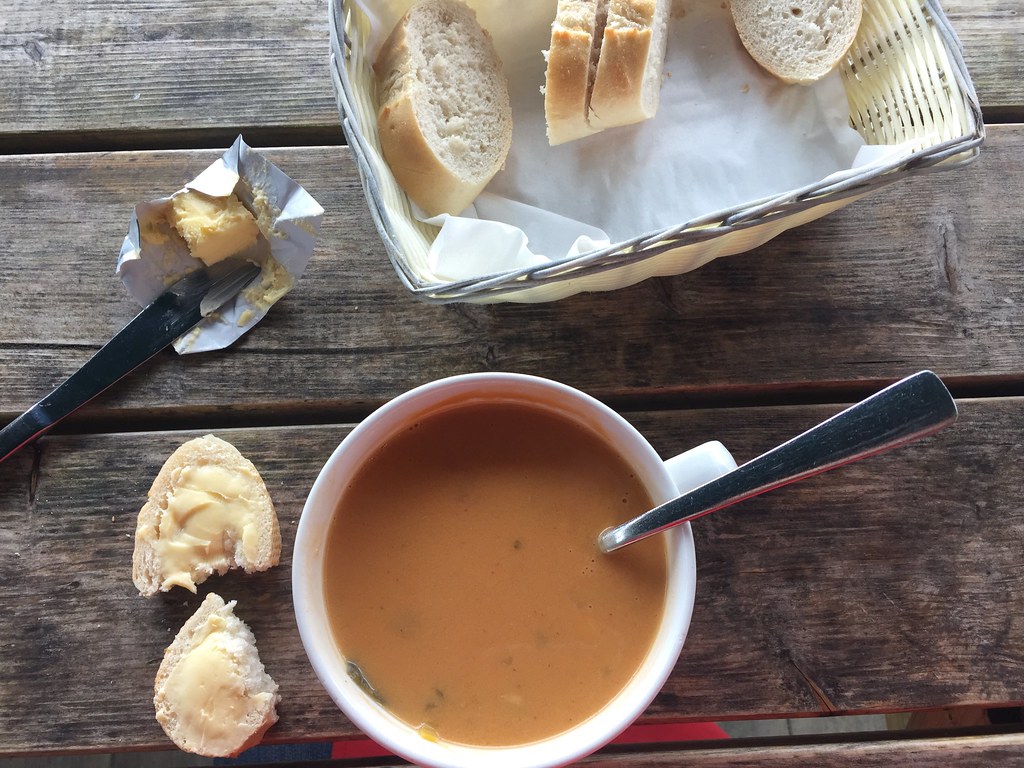 I ended my trip the same way I started my first one 5-years prior; lobster soup at the Saegrefinn right on the wharf. The shack is much busier now and has built a covered outside patio, but the "menu" of an open refrigerated unit was still there offering various fresh catch skewers ready to be grilled, and the soup was still delicious. So not everything has changed. 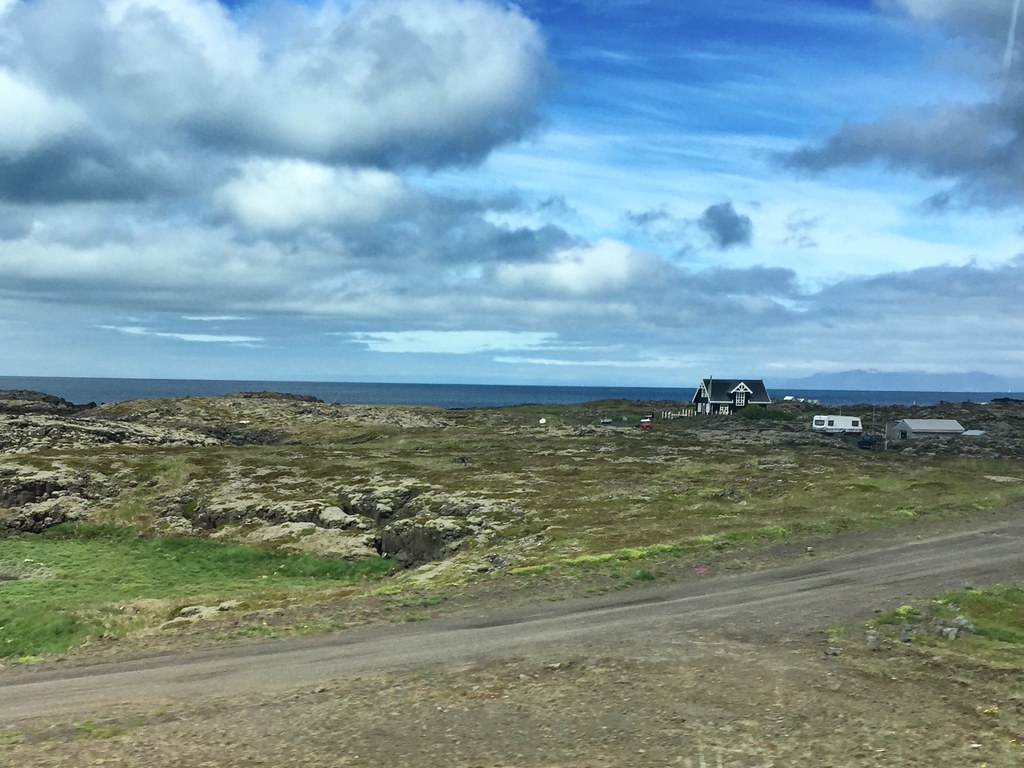 After arriving at the airport again via Flybus, I flew Saga Comfort Class back to Seattle. My seat was upgraded to the same as Saga (1st) class but I had drinks and food off the cart (complimentary) instead of the "fancy" menu. All good!

Another wonderful trip to Iceland, next time I plan to take more time and get to other regions besides Reykjavik. If you're headed there, make your plans in advance, pack for all kinds of weather even in summer, and support the local economy. It's such an amazing part of the world!

Other posts from this trip:
The Longest Day
My Midsummer Dream
30,000 Islands & Counting