Out and About in Lithuania

On our 2nd full day in Lithuania, we picked up our rental car and drove to Trakai Castle. When we left Vilnius it was cold and sunny, which quickly turned to cloudy and snowing. After just a short drive we arrived in the town and walked across the bridge to the castle which sits in the center of the lake; snow falling all around us. When people ask why I travel to these cold-weather destinations in the winter, this is why. It was fantastic! 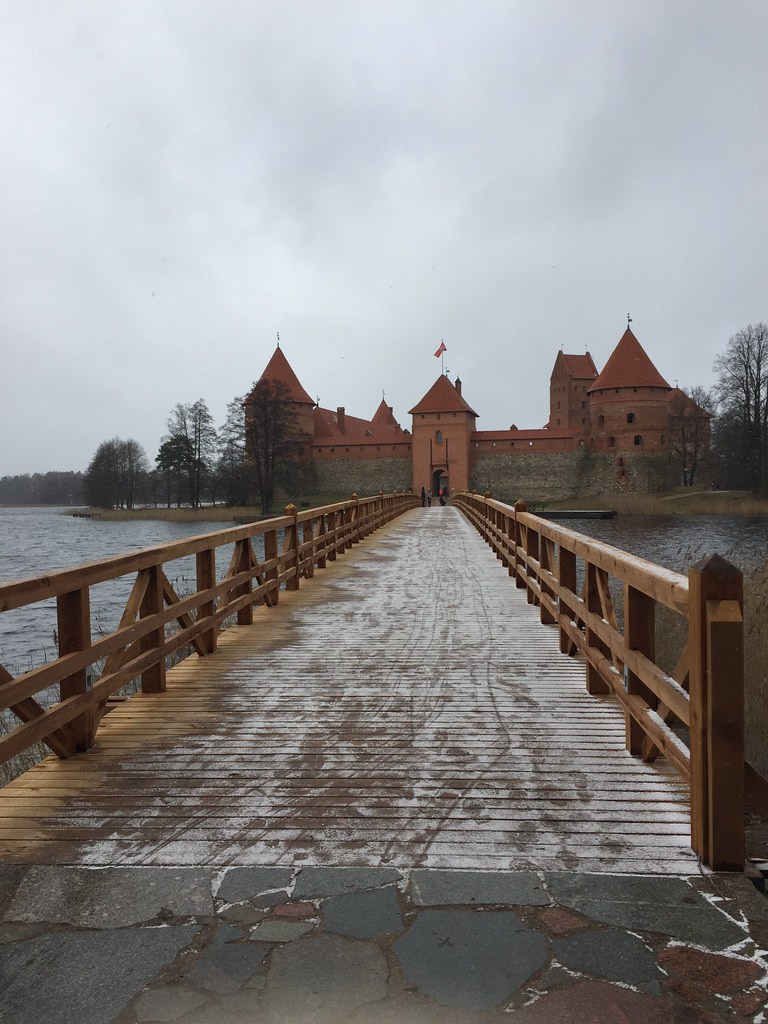 We spent a few hours going through the palace, towers, casemate, and courtyard. The rooms were filled with a lot of interesting displays of silver, original coins, weaponry, traditional dress, stained glass, and a great photo exhibit of the restoration of the castle.

At one point the four of us were the only ones in the castle's ballroom. That doesn't happen in the summer! 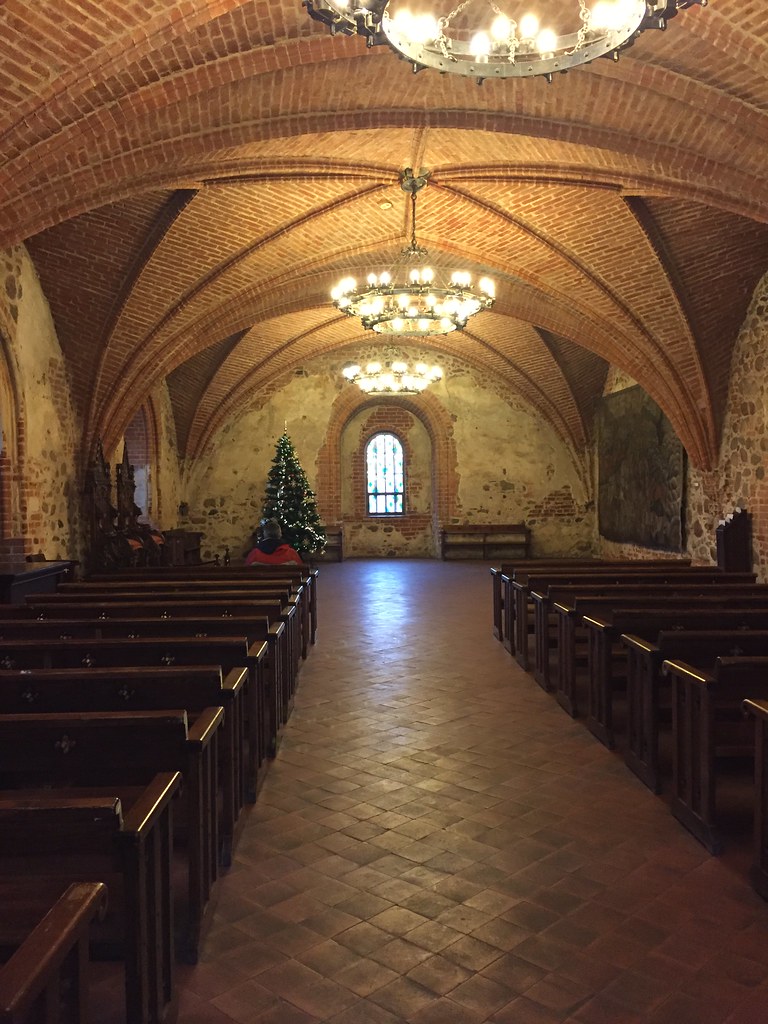 One of the more unique exhibits was a very large collection of smoking pipes in a variety of sizes from as small as a thimble to large water pipes. 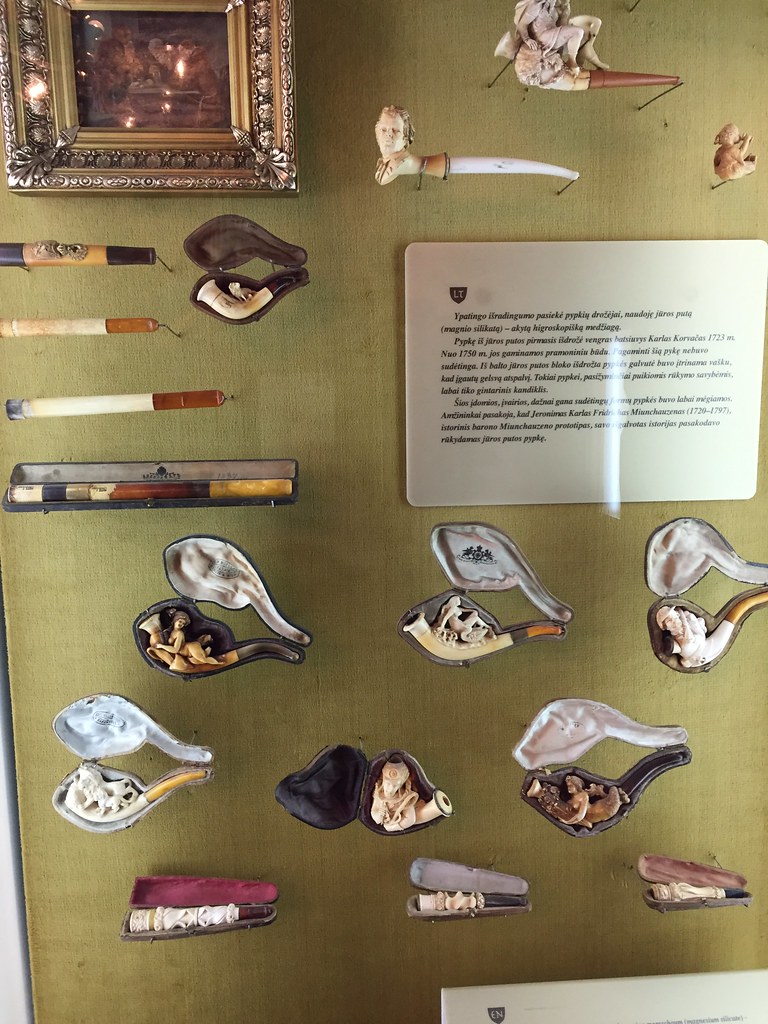 When we were done, we walked back across the bridge to the small town and had lunch at Bona Pizzeria. Although you might be able to get pizza here, we chose it because they are known for their traditional Karaite pastries which are similar to empanadas. 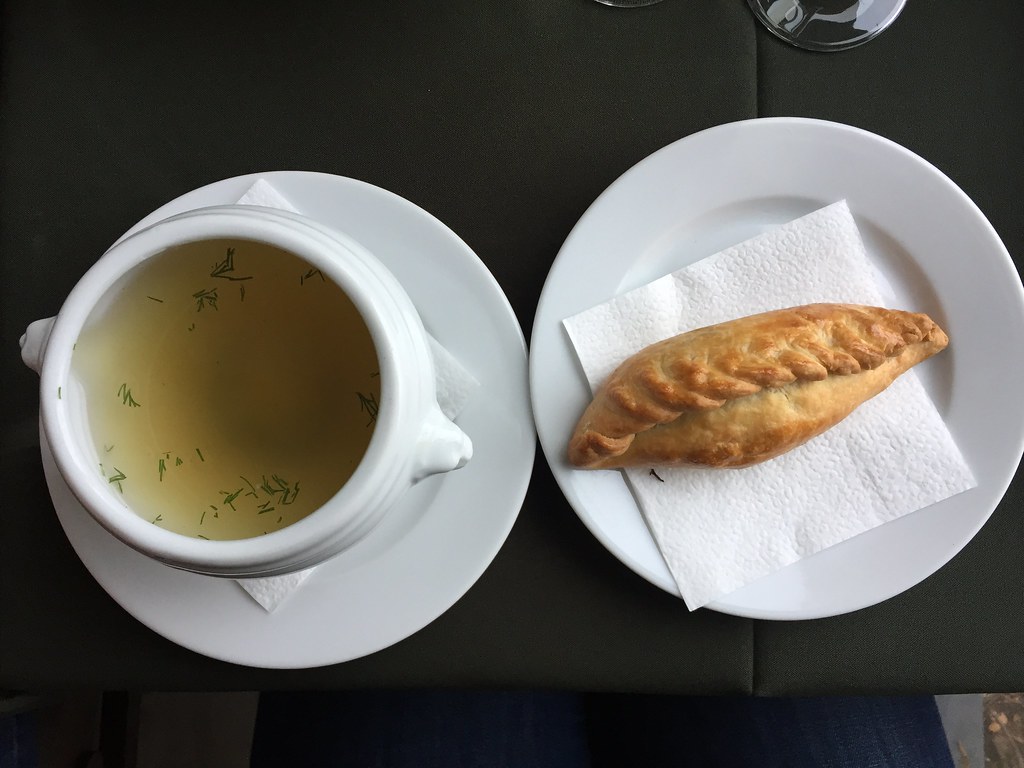 A great view of the castle, delicious chicken broth loaded with dill, and a pastry filled with lamb made for a great lunch. Forest's soup came with a roll of bread that was as black as lava! Go here if you're in Trakai!

When we got back to Vilnius Thibault led us on a walking tour around Old Town. We passed so many churches it was almost absurd! I read later that there are 28 churches in the old town; 21 are Roman Catholic, four are Russian Orthodox, and one each of Lutheran, Reformed and Eastern Rite Catholic. 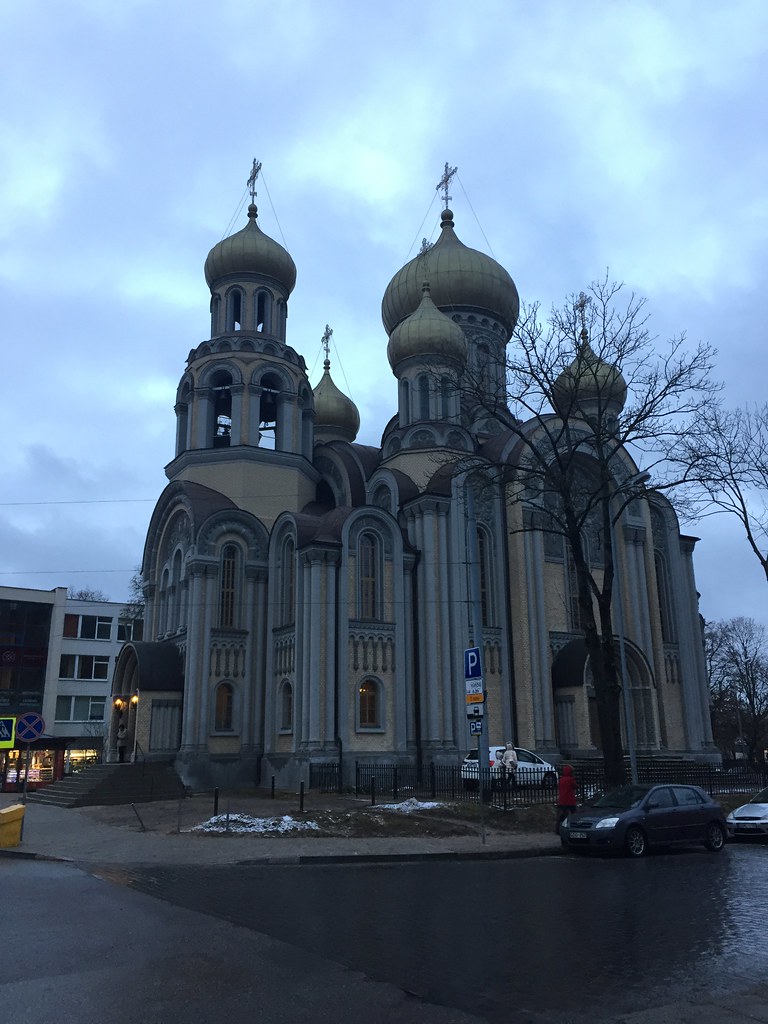 Six of the Catholic churches, such as this beautiful pink one, still haven't reopened since the Soviet occupation. 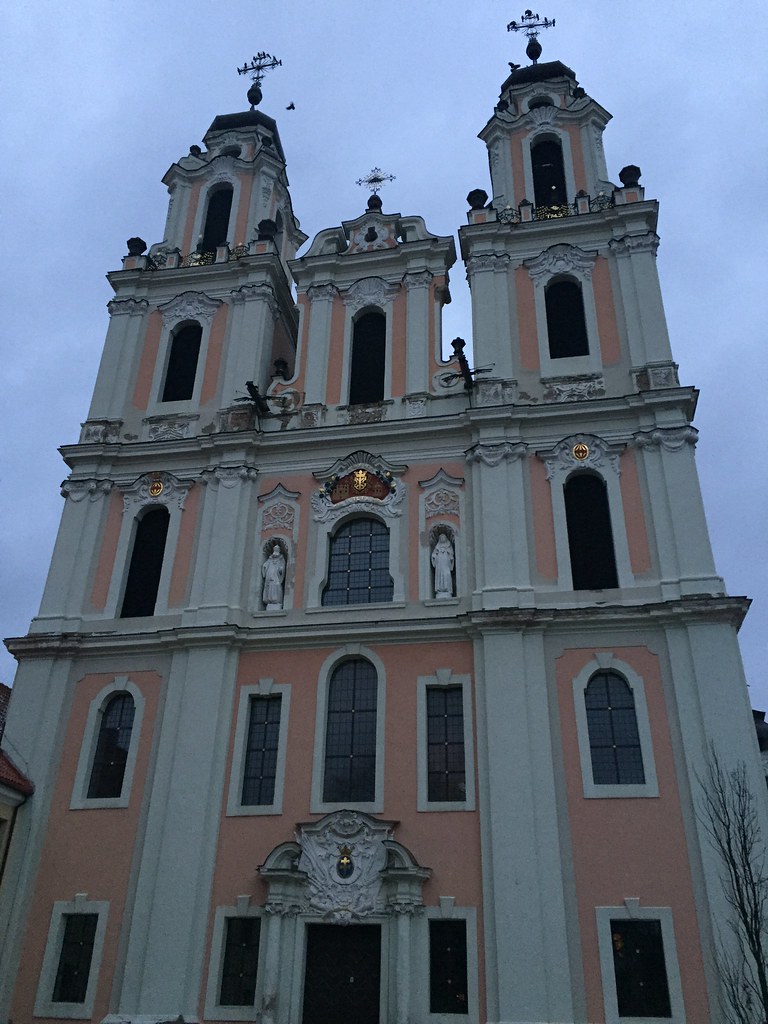 Some of the churches are almost stacked on top of each other as the old town is only 3.5 square kilometers. 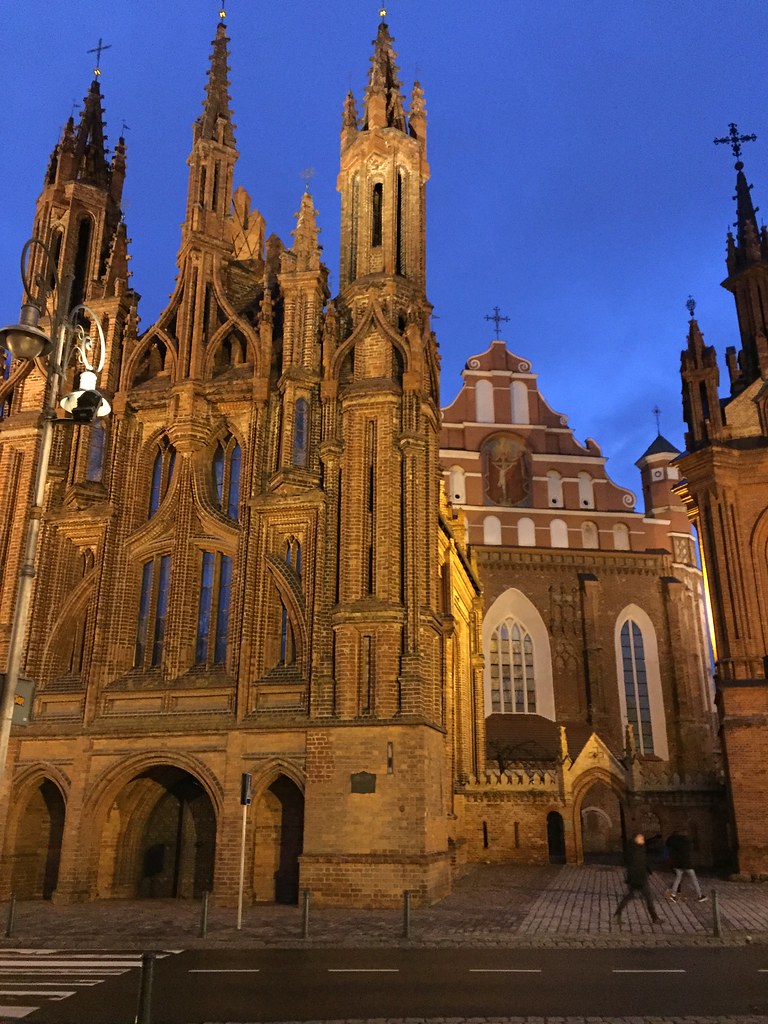 There wasn't time to go into them all but we did duck into a few. This being just after Christmas, one even had a live manger in the entrance! 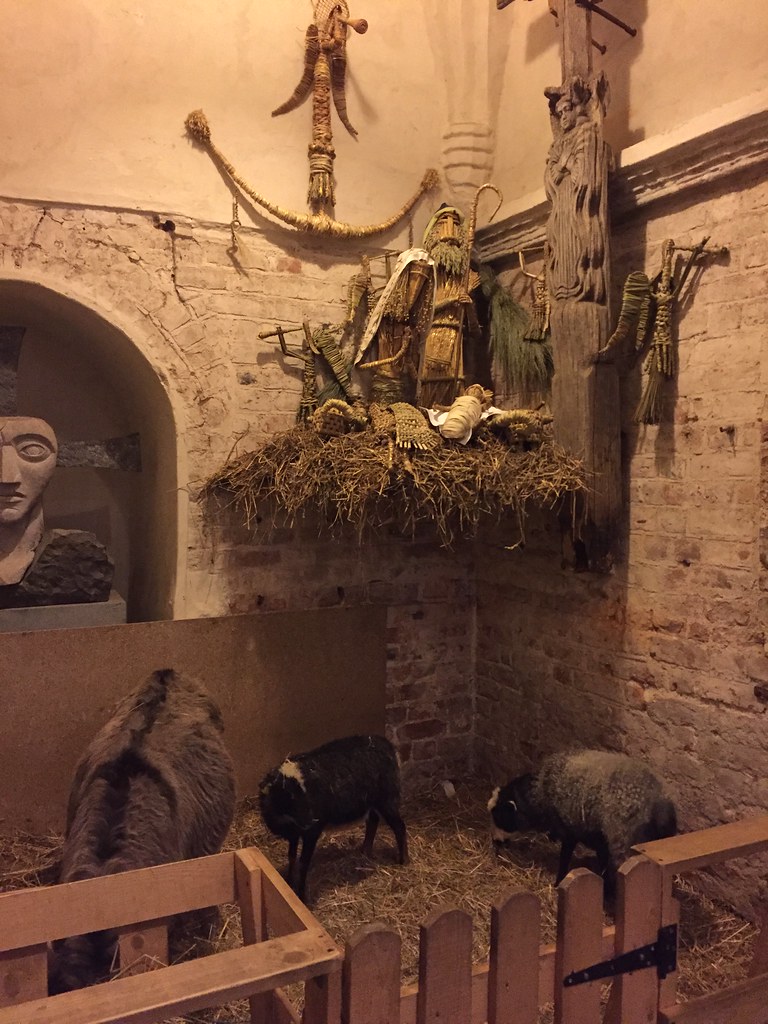 We ended our tour in the Uzupis Republic. A self designated independent republic, this little neighborhood is filled with artists and cool hangouts. We squeezed into Spunka for beers, a very fun place with lots of locals and more beer choices than I knew what to do with. 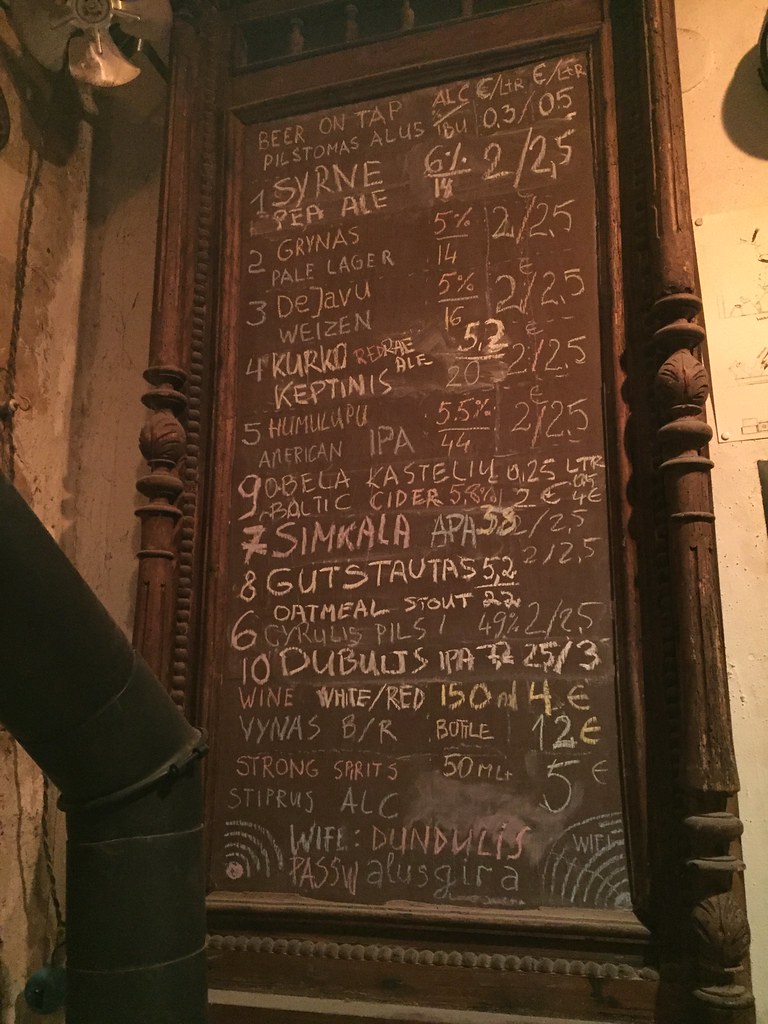 We made our way back over the river towards where we were having dinner and stopped into Notre Vie as we had read it was a good wine bar. When we started chatting with the bartender he sold us on his cocktail making skills so we changed our orders only to end up with Negronis made with Sprite. No worries, they were super friendly and happy to have us.

Dinner was right next door at Lokys. The restaurant has various rooms, most looking a bit medieval, ours unfortunately resembled the inside of a business hotel from 1978. But the meal was fantastic! We had sausages made from beaver, venison, and wild boar, local cheeses, a delicious cold beet soup, meatballs, etc. I'd absolutely recommend Lokys for dinner! 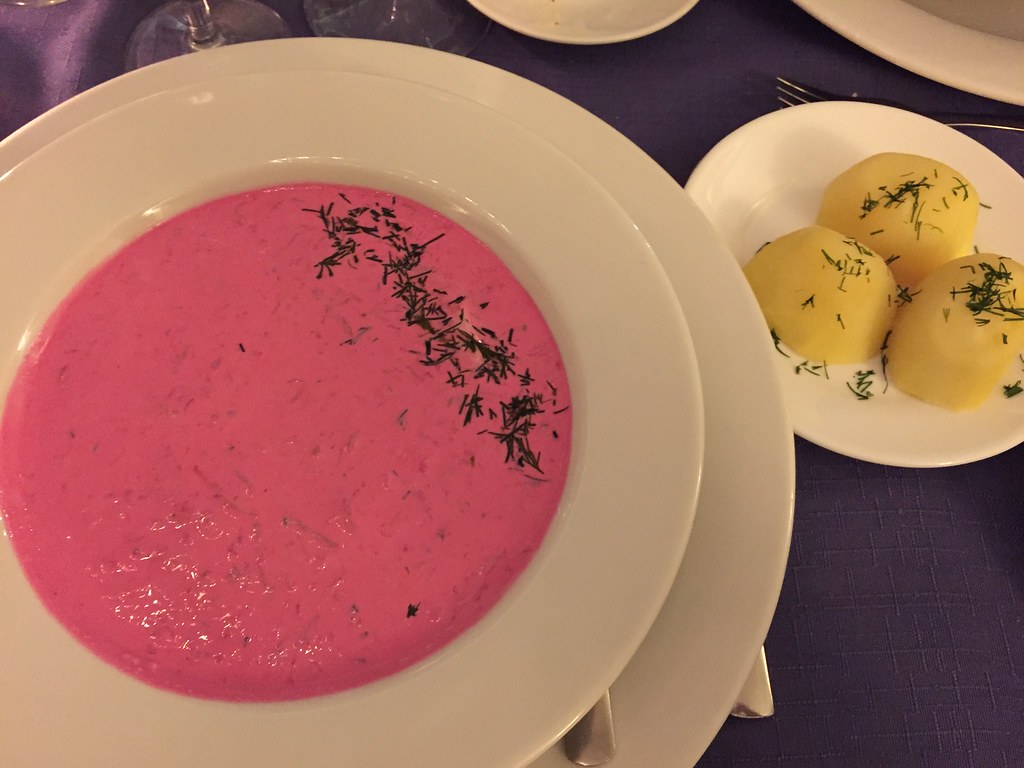 Our uber home cost 3 Euro! Caitlin, Forest, and I had nightcaps and some musical sing-alongs before turning in.

On our last day in Vilnius Thibault, Forest, and Caitlin took the car and headed out of town to the open-air sculpture garden, Europos. They showed me lots of awesome photos, and all of them really enjoyed it, so I'd say if you have time and a car that would be a good day trip. I decided to stay and see more of the old town. 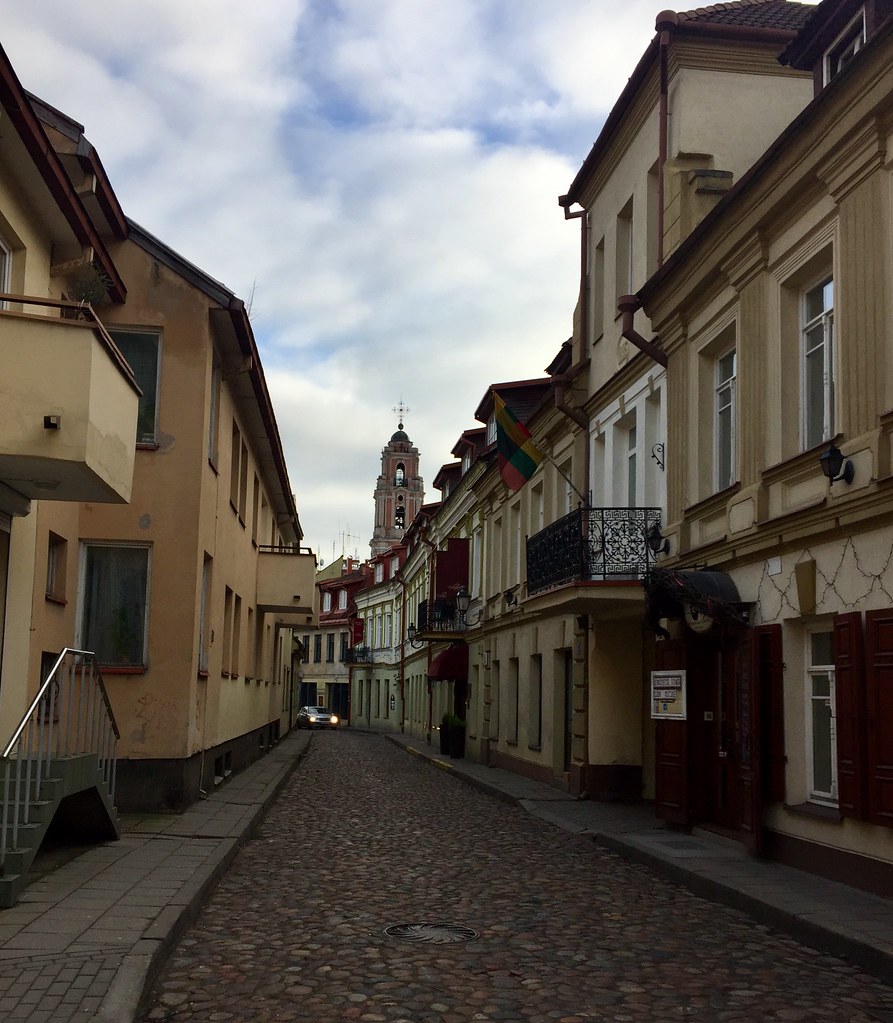 I loved my day exploring the twisty cobblestone streets of Vilnius. As I was walking towards one of the old gates of the city, I happened upon the main market which was very busy. Pork seemed to be the main attraction featured both in raw cuts and various cured sausages, and there were lots of interesting spices, vegetables, assorted clothing and household items.

Right outside of the market I spotted a small group of locals selling their own homemade items, no tables needed for them! 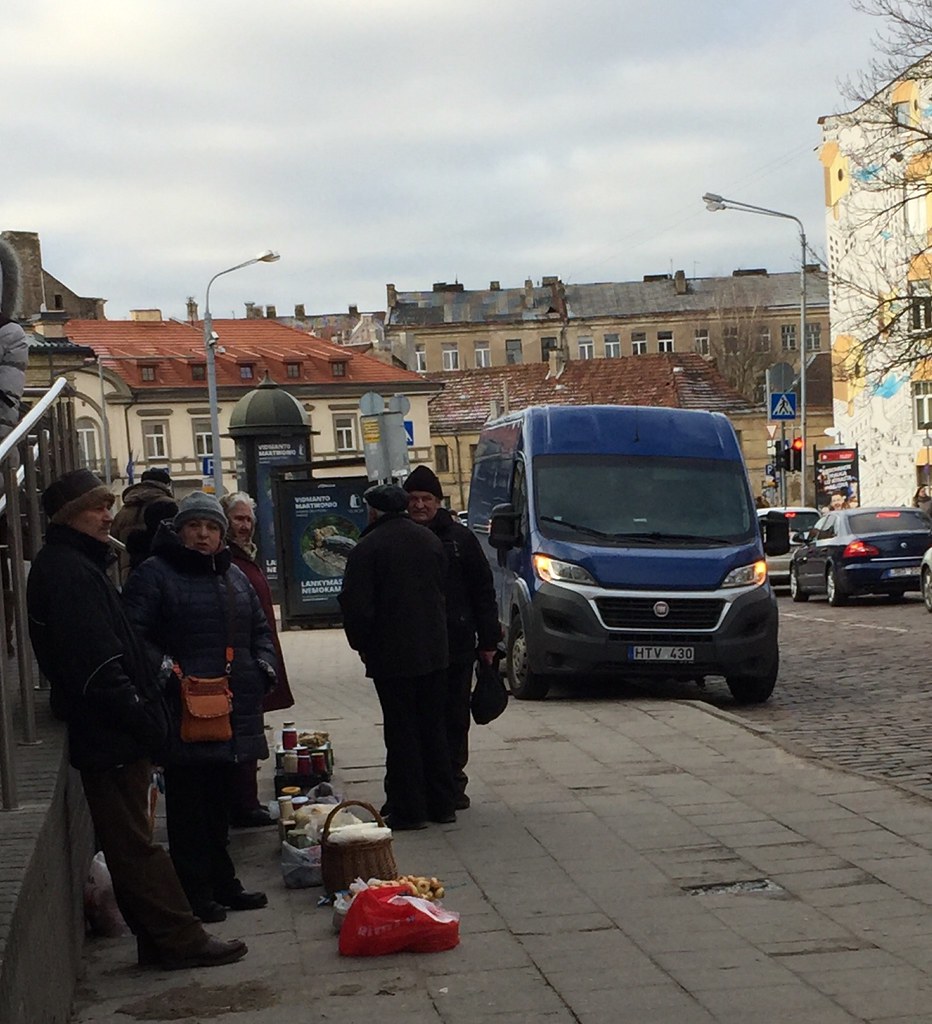 At the very south end of the city is the Gate of Dawn. Above the gate is the tiny Chapel of Our Lady of the Gate of Dawn. The icon of the Virgin Mary here is said to have special powers and as I sat for a moment, observing people in prayer while watching pedestrians in the streets below, I could see how special of a place it is for them. As I walked up the stairs to the chapel I even witnessed one woman who climbed up on her knees in an act of veneration. 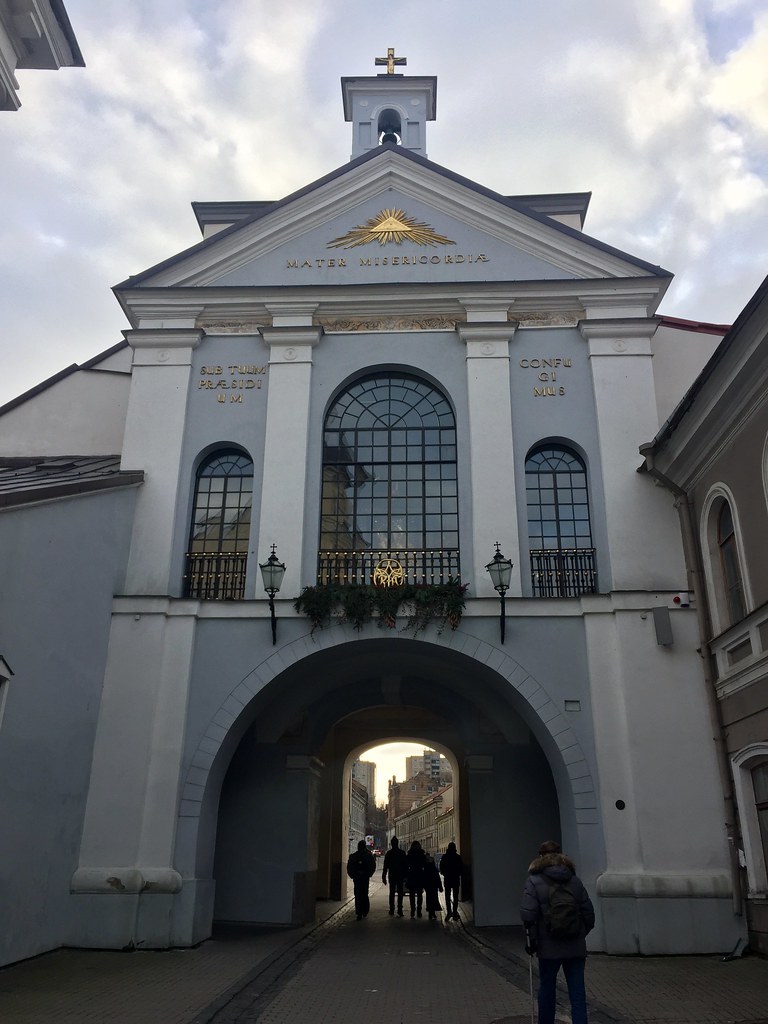 Old Town Vilnius is gorgeous, it reminded me a bit of Bratislava with the pastel colored buildings and narrow pedestrian only streets. But nowhere have I seen this number of beautiful churches. 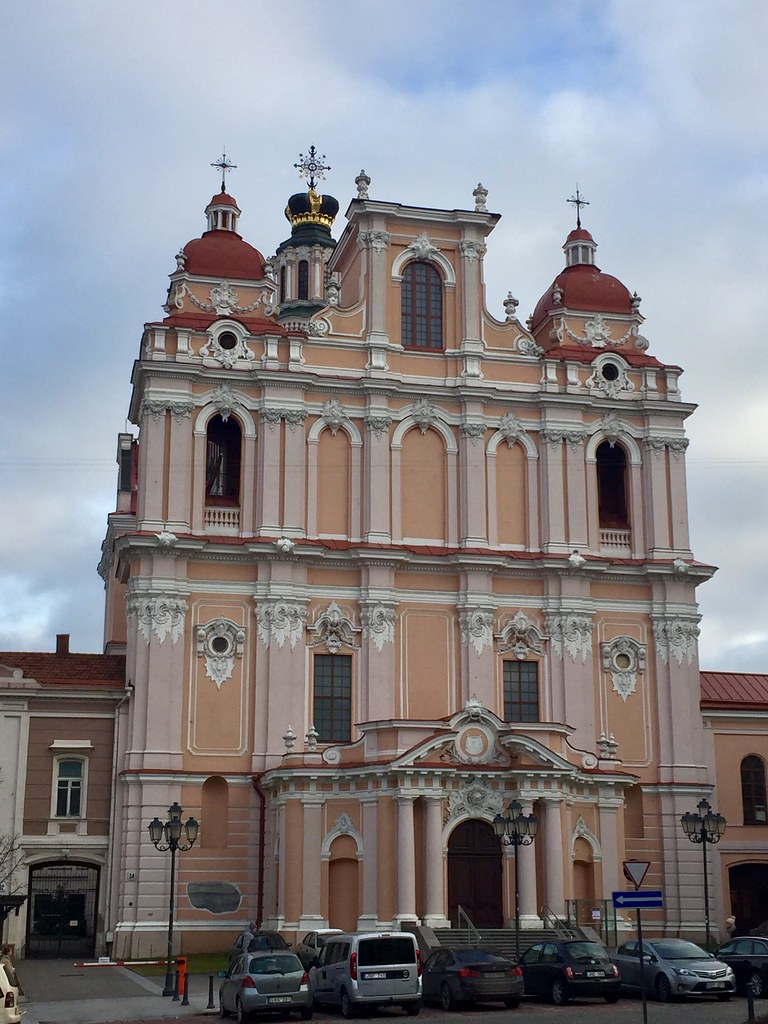 It was lunchtime so I made my way to Gabi, which was recommended to me by some friends, for traditional zeppelins; potato dumplings filled with meat and topped with bacon and sour cream. I wish I had a chance to try zeppelins at more than one place as these had a strange texture which I didn't really enjoy. I'm not sure if that is how they are normally or just here. 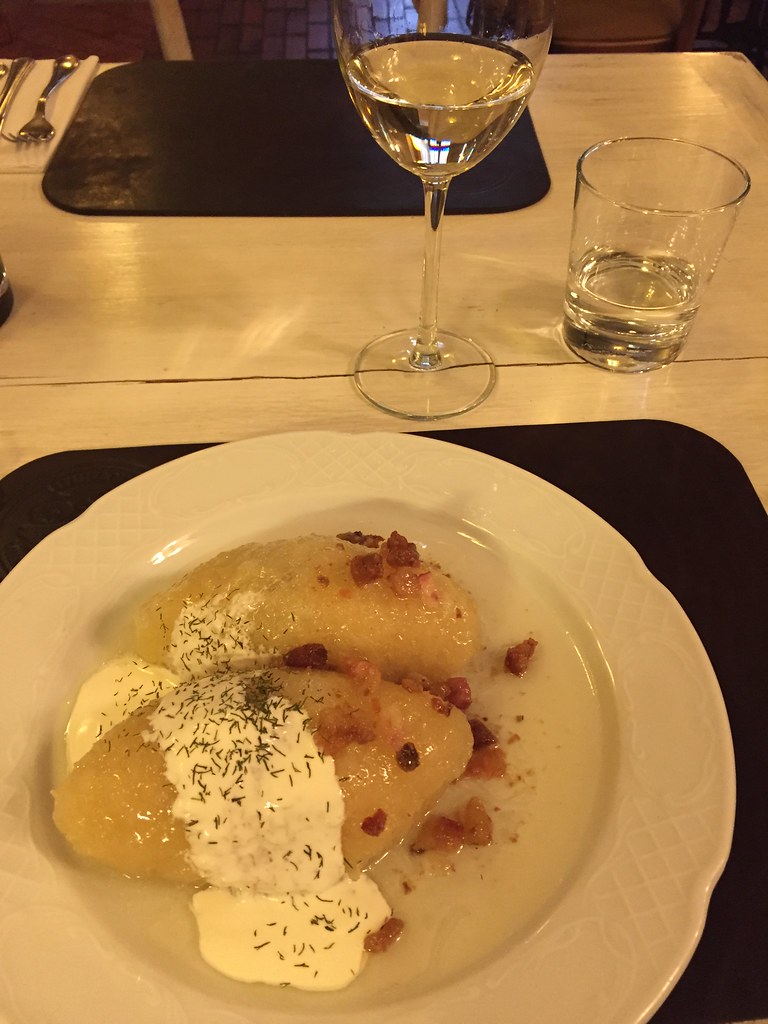 It was a clear and sunny day and I returned back to Cathedral Square in the hopes of taking the funicular up to the castle tower for sunset. Unfortunately it was closed as there had been a landslide, so I opted to climb up the bell tower instead. The views of the city were just beautiful from here! 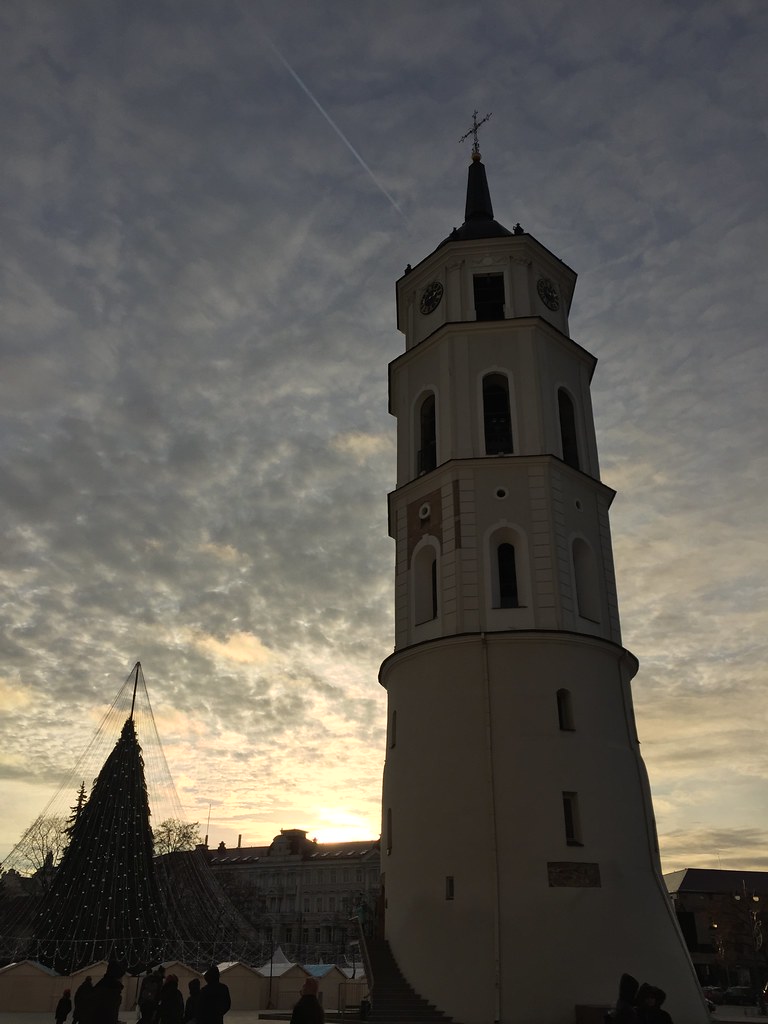 When you climb the tower you are on your own and can go all the way up into the rafters. They warn you that you will be right next to the bells so you aren't shellshocked when they ring! 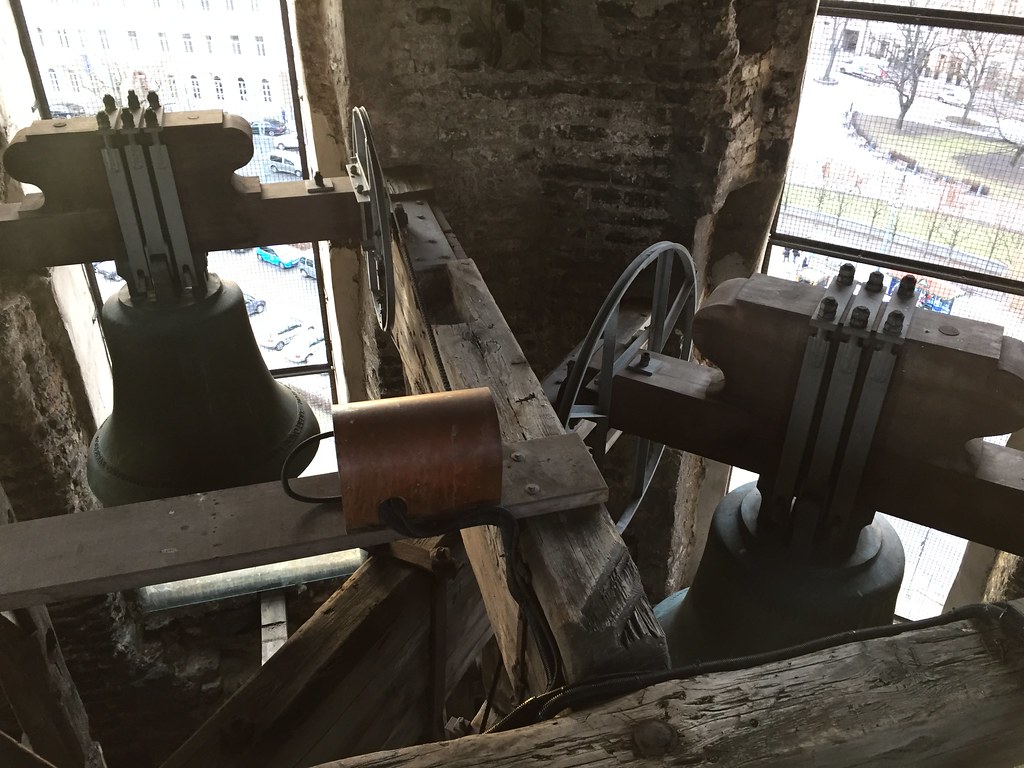 From here I walked to the Genocide Museum which is housed in the old KGB offices. Wow, what a unique museum! The main exhibit focuses on the effects of WWII on Lithuania and includes a lot of information on the Secret Service and Soviet powers. 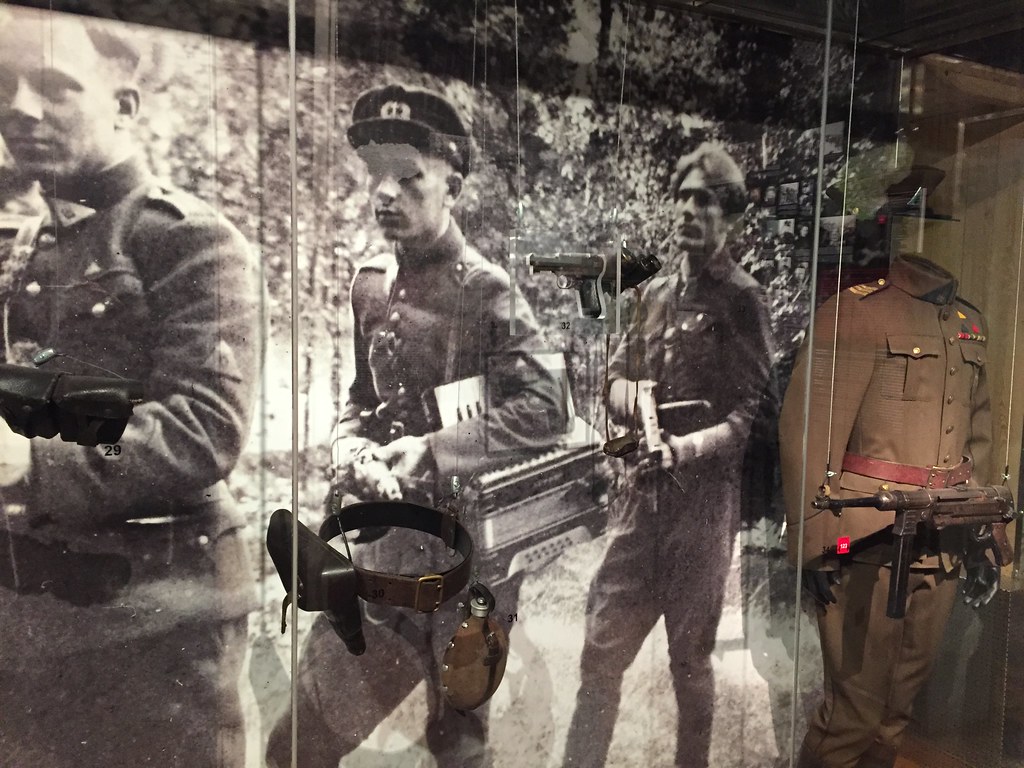 In the basement of the building are the old KGB prison cells. You self-guide yourself from the entrance where they processed people, holding them in claustrophobia inducing tiny dark closets, to small cells where 4 to 8 men would have been held.

There are a few different isolation cells and a torture cell where the prisoner was forced to stand on the small raised circle platform or they would fall into ice water. 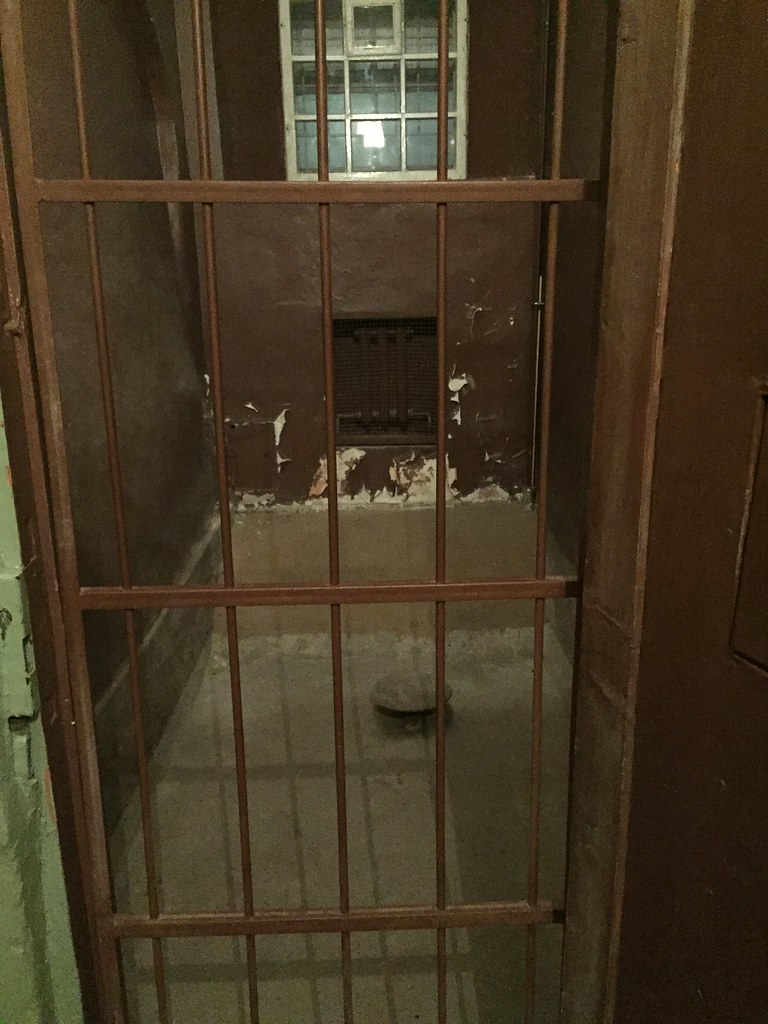 You pass through the exercise yard, where neighbors have a view into, on the way to the execution chamber, complete with bullet-riddled wall. A single shot to the back of the skull was the preferred method at the time. 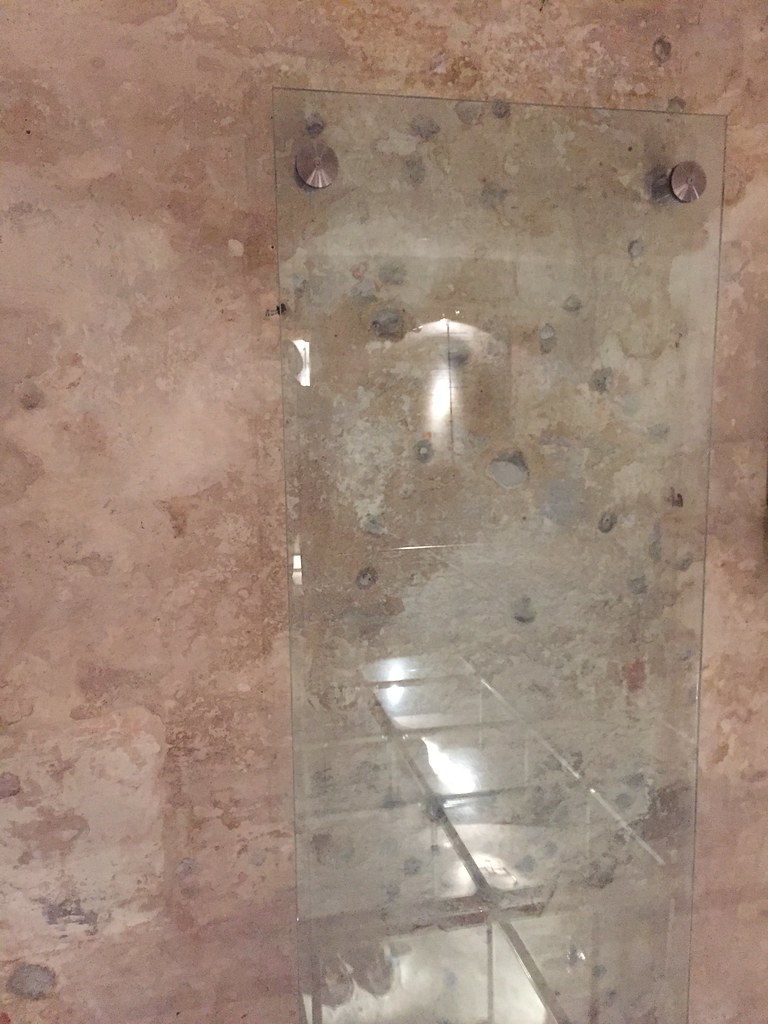 Grim yes, but historical and interesting for sure. This museum was unlike anything I'd been in before and I'd recommend it without a doubt.

We all regrouped back at the apartment and shared our stories of the day over aperos and baked Mont d'Or cheese we had purchased in Beaujolais. 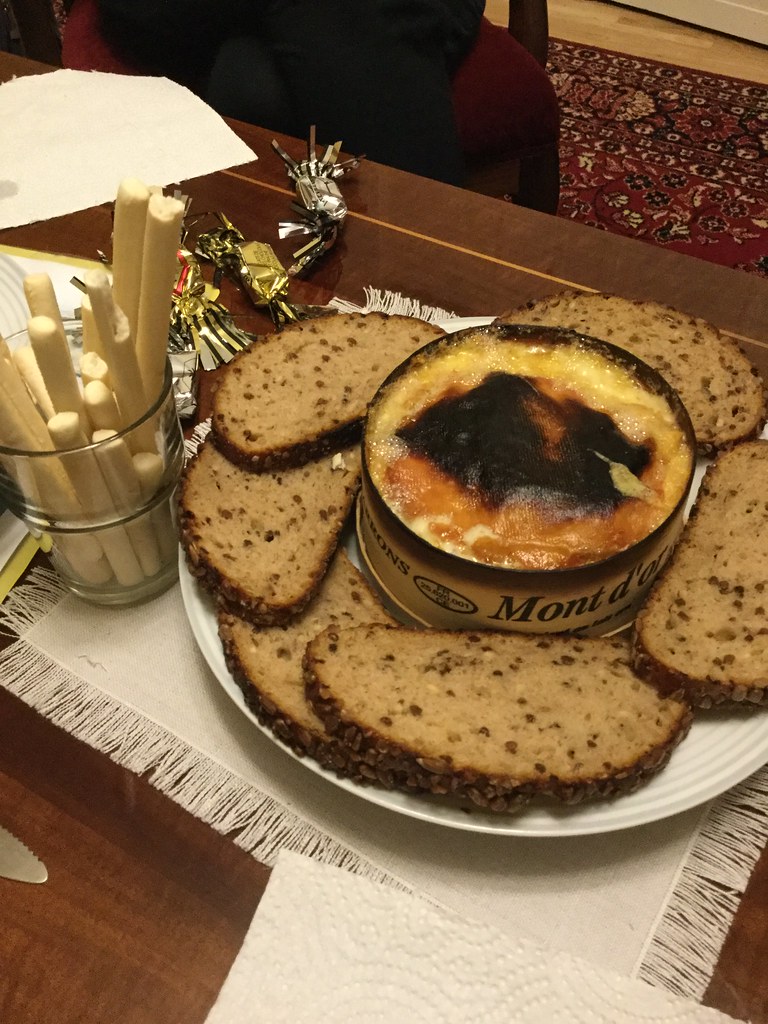 It was our last night so Forest, Thibault and I headed out for a little cocktail crawl. First up was King & Mouse Whiskey Bar. They are very proud of their whiskey selection here, and I have to say for being in a small town in the Baltics I was impressed too. I had a nice flight made up of whiskies from Japan, Taiwan, and India. 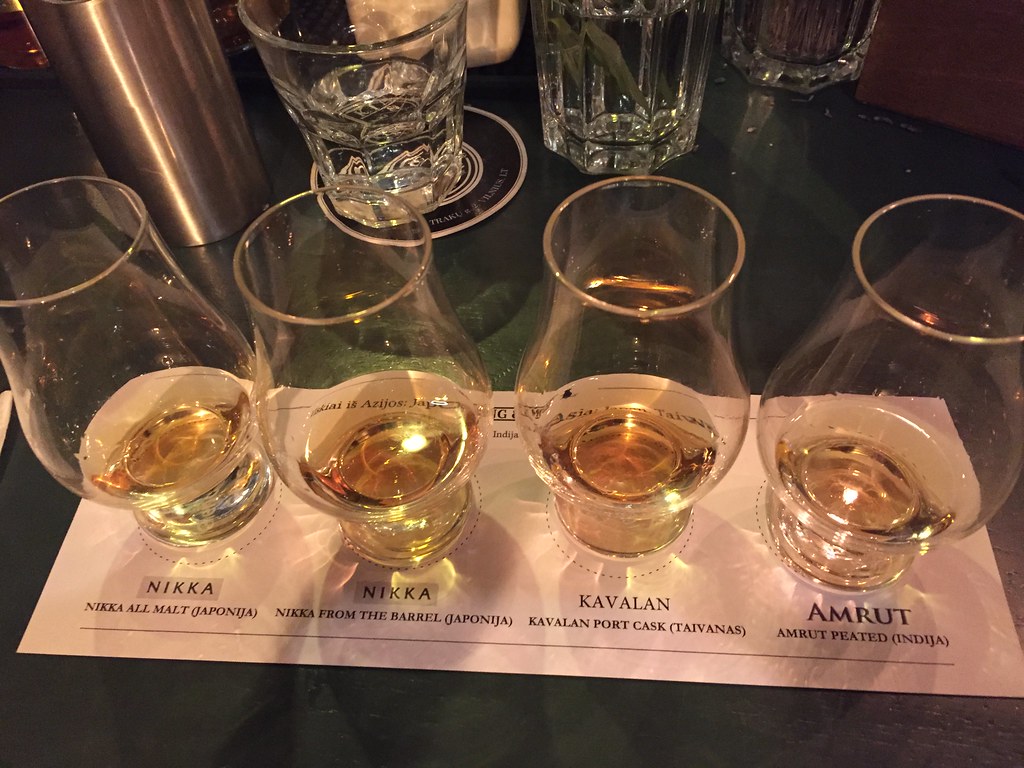 The bartender told us about another bar called Apoteka so we called an Uber and made our way there. This super cute, subterranean feeling bar is all about craft cocktails and we loved it. Especially charming was when we ordered round two of martinis and the bartender found the bottle of vermouth to be empty! Vilnius doesn't have a bottle store on every corner so we were almost out of luck, happily he found a backup! 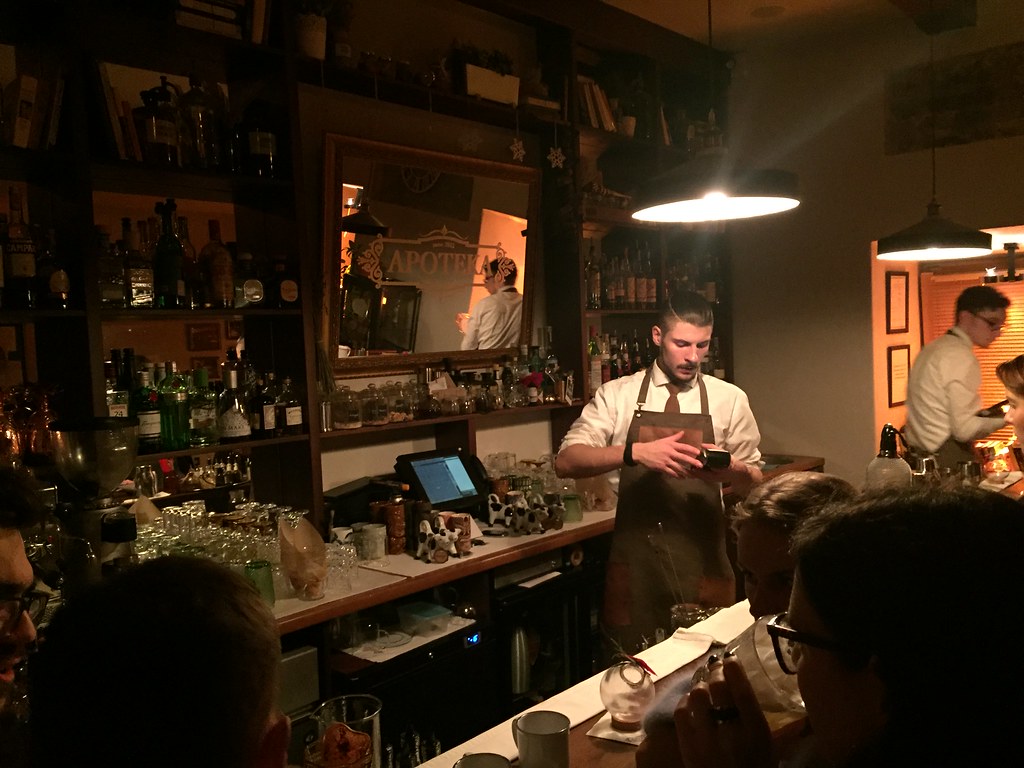 I really loved Vilnius, much more than I had expected to! It is small and quaint and pretty; interesting architecture and a nice mix of new and old. Less medieval than Tallinn, Estonia and impressive in its number of churches for sure!

We were saying sudie to Vilnius and driving to Latvia in the morning, which I was very excited about as well!

All Lithuania photos are here, you can also find photos of our trip on Instagram using the hashtag #BalticBash2016

Other posts from this trip:36 Hour Parisian Birthday PartyChristmas in BeaujolaisBaltic Bash Kick Off
A Very Baltic New Year