We arrived at the train station in the town of Macon from Paris, Thibault's brother Olivier was waiting to drive us to their parent's home in Liergues. Their parents have a lovely home right on the edge of the small town; vineyards are their next door neighbors, and rolling hills could be seen from my bedroom window. The front room held a small Christmas tree, a fire was lit in the stove insert, and there were festive decorations. I was super happy to be spending Christmas in this small town in Beaujolais! 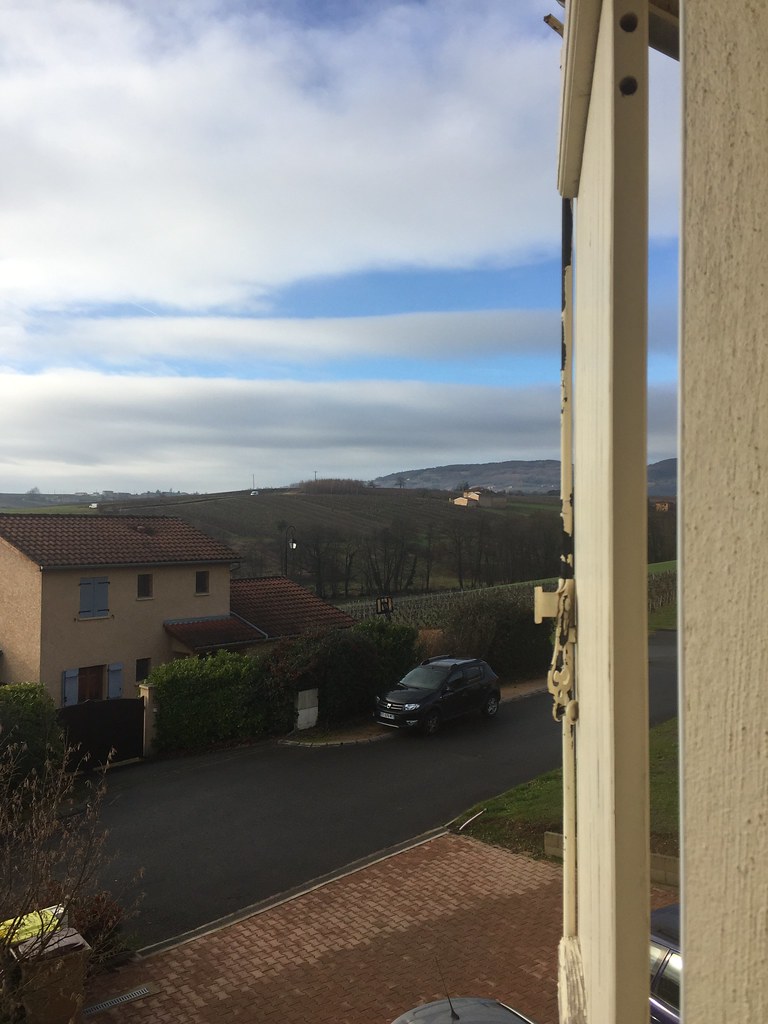 After getting settled into each of our rooms, it was time to sit down for dinner. The selection of appetizers, followed by quenelles in a rich mushroom sauce, lovely wines, perfectly dressed salad, and an impressive selection of cheeses, let me know that I was in for a delicious 4 days of French eating. 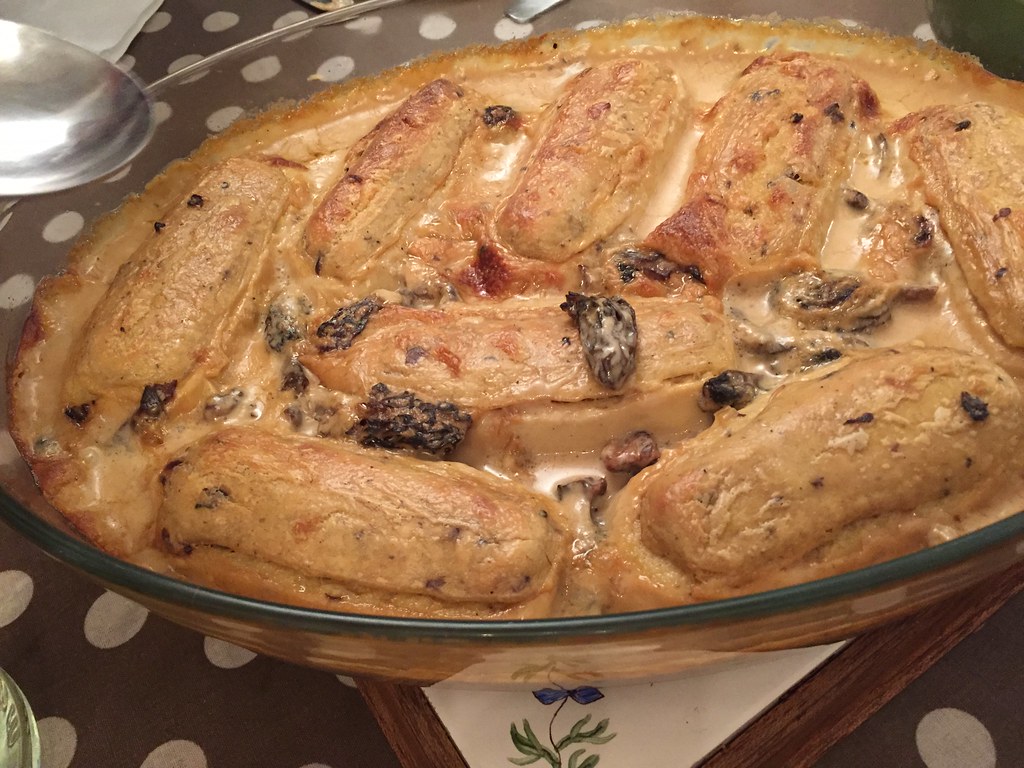 My bedroom had two big comfy beds in it, so when everyone turned in Forest and I sat up chatting in our pj's. It felt like a slumber party!

The next morning was Christmas Eve; we started with a casual breakfast of breads and coffee at the kitchen table. Forest had brought a delicious homemade banana bread and we asked their mom Mary Jo if she had ever had or heard of this before. She assured us that the French do not make bread from old bananas! She thought it was funny when we told her that most kids grow up on it in the States. She laughed heartily when I told her zucchini bread is a thing too!

Forest and I piled in the car with Olivier and his dad Guy-Noël for a drive to the market in neighboring Villefranche Sur Soane. There was lots of nice looking winter produce, many regional specialties, and some funny "cocktail avacodos" which looked like pickles that neither of us had seen before. I also got a little lesson in various species of poultry from Guy-Noël at one of the stands. 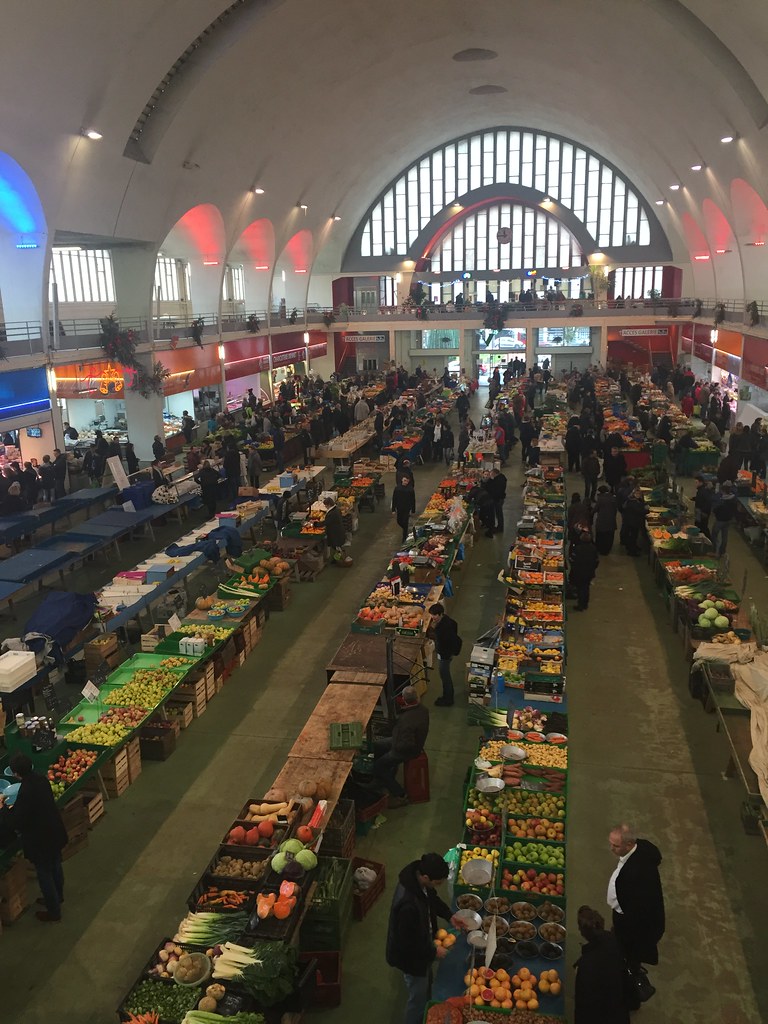 From here we went to their preferred bakery for warm baguettes, and then to the cheese shop to pick up some seasonal Mont d'Or. Ah, France...

When we got home the parents set about making a very nice lunch, even grilling duck on a handy gas grill they set up INSIDE their kitchen. More delicious wine was poured, more amazing cheese was eaten. I was truly in heaven. 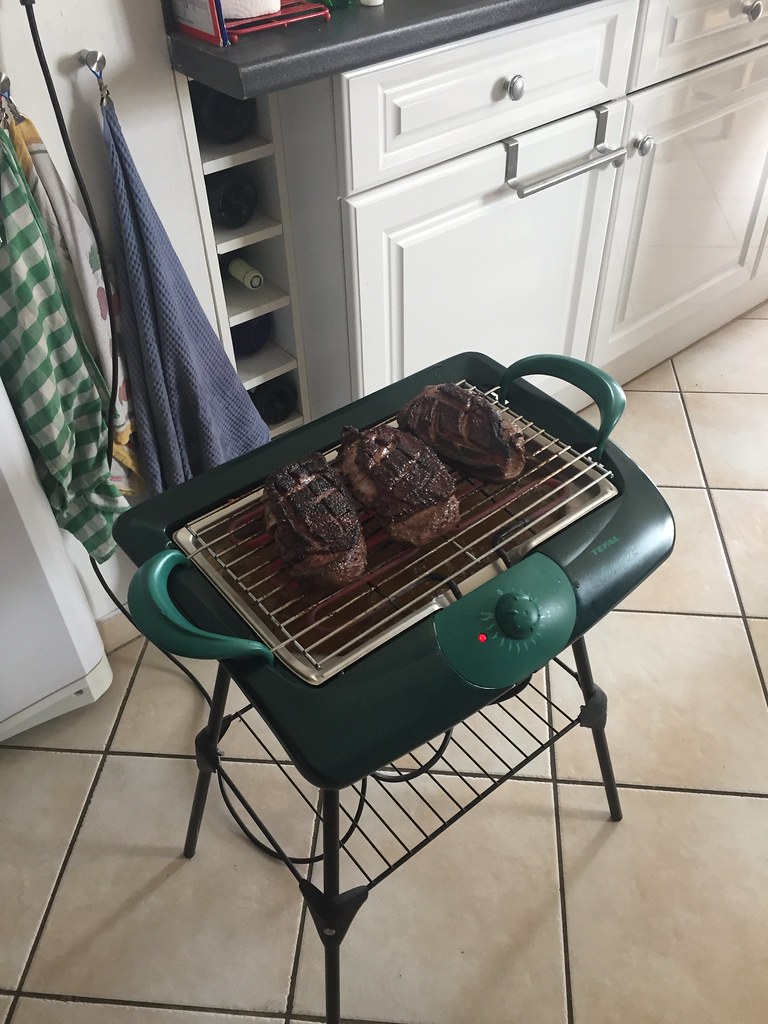 After lunch Forest and I piled into the car with the men of the family and Guy-Noel drove us to the town of Theize where we wandered and took in the beautiful now shuttered chateau. 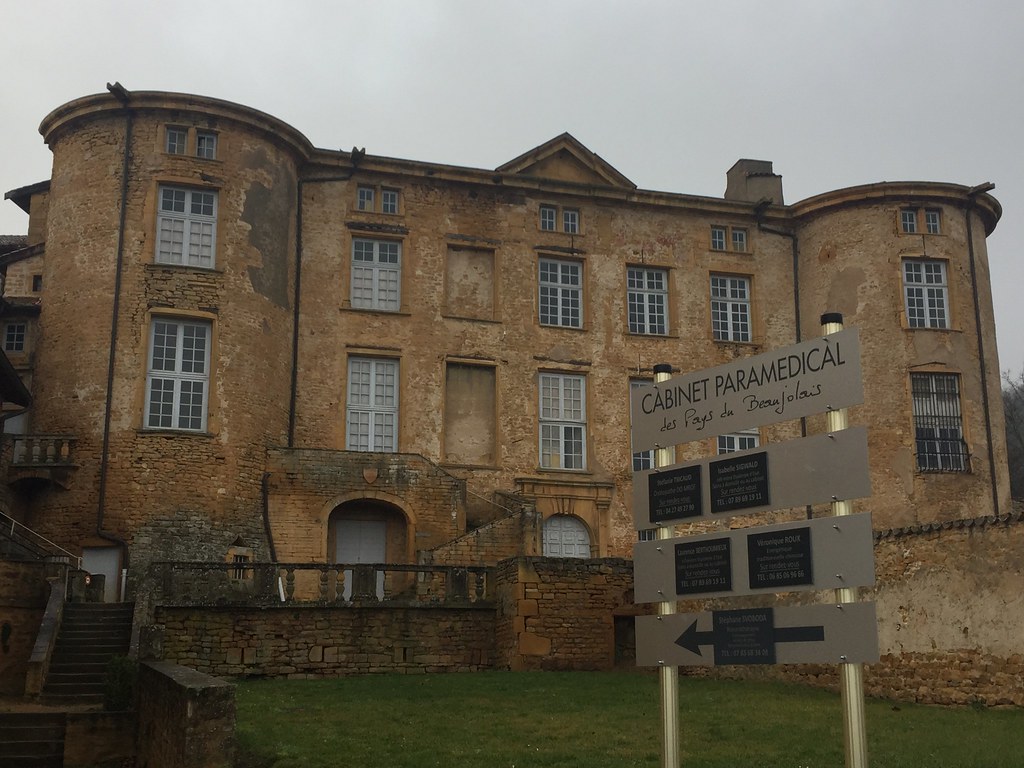 From here we continued on to Oingt, a small town that puts on a display of 100 crèches (nativity scenes) each year. This was such a fun excursion and a great "locals" experience. Everyone made their way through the town's cobblestoned streets, searching out the crèches, which were displayed in the church, store windows, and gardens, and were made out of pinecones, shells, and other random items. 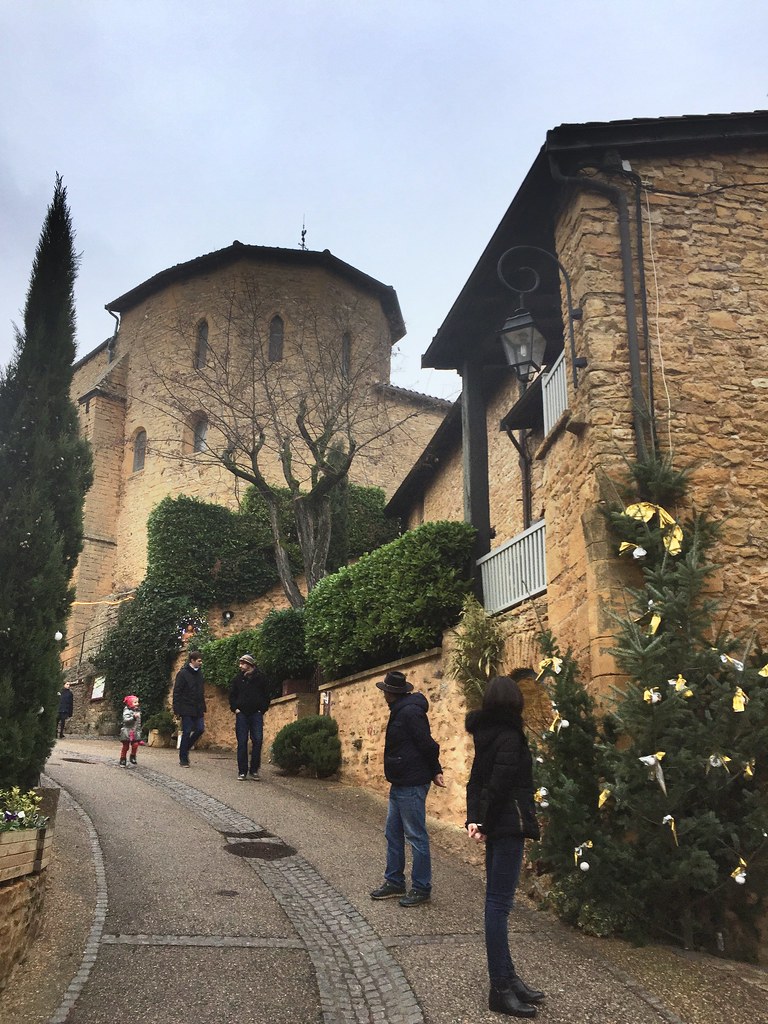 The largest display was in the church, which had crèches representing all of the countries in the world. It was great, and unlike anything I had seen before. My favorite might have been the nativity scene inside this old car. 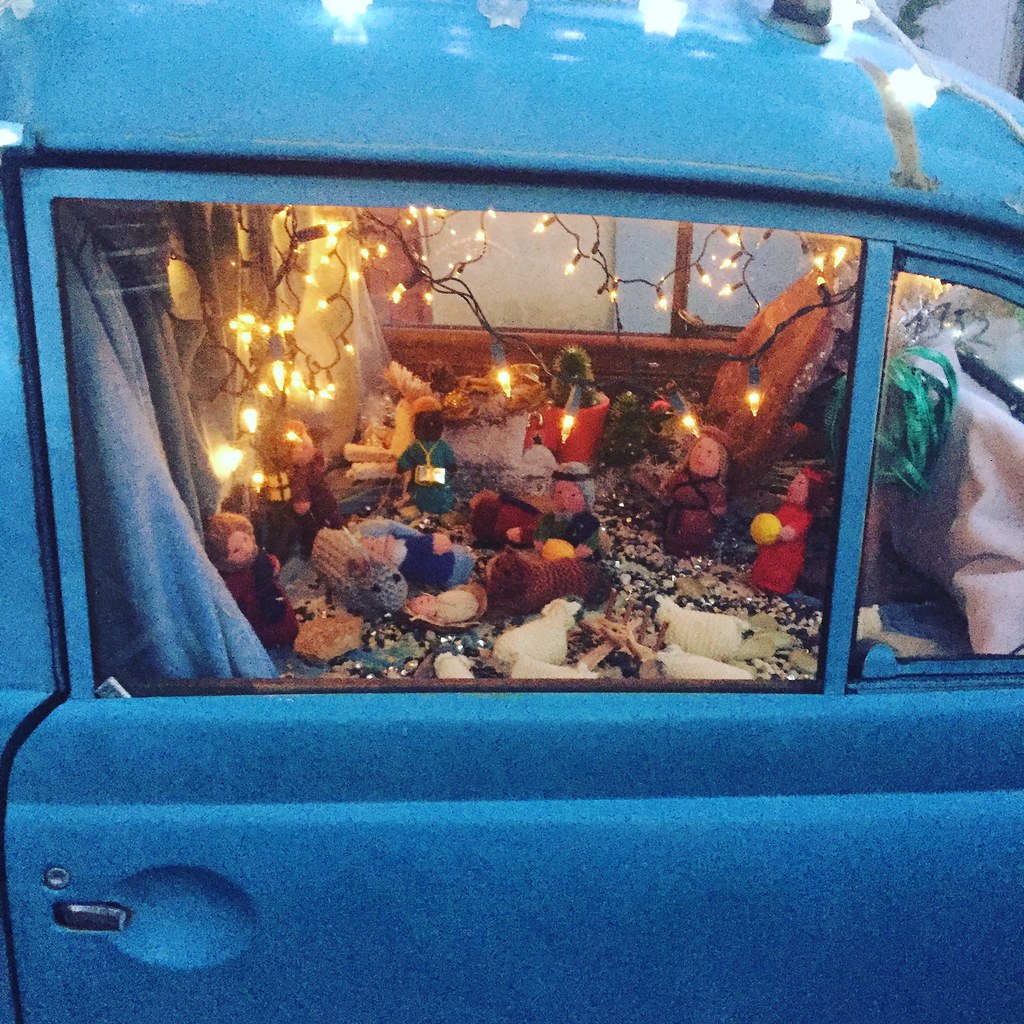 As the sun set, we took in the magnificent views of the valley before stopping for mulled wine outside the town hall with other neighbors. 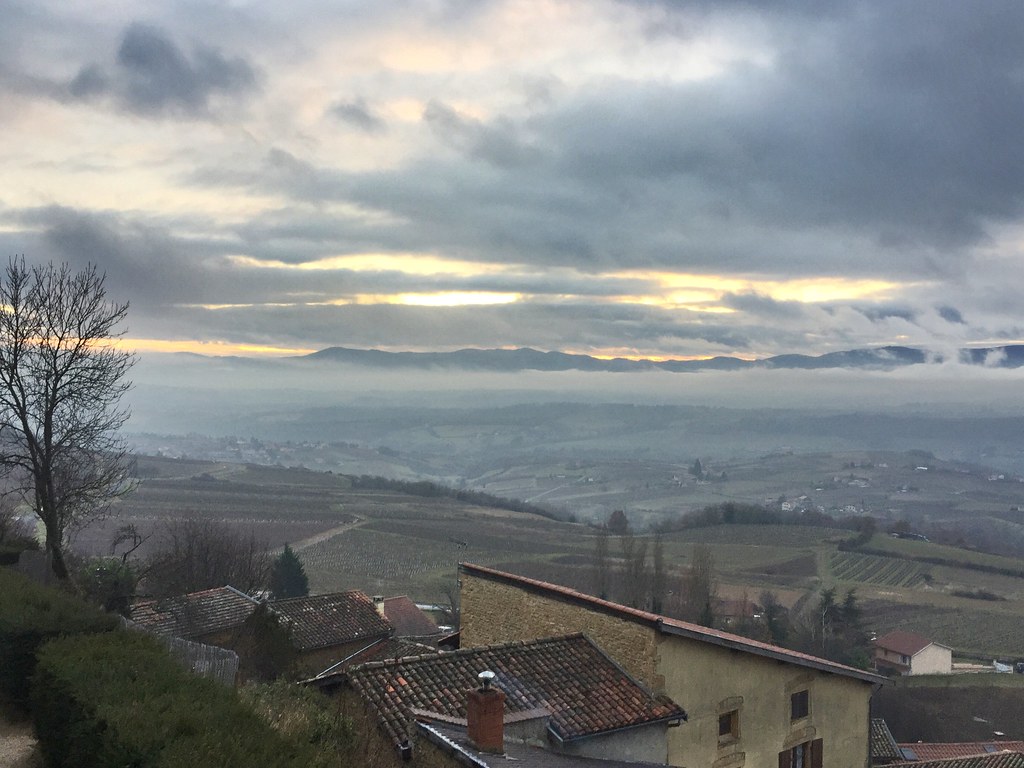 The main celebration in France is Christmas Eve, rather than Christmas morning, so that night's dinner was the big event. And it was nothing short of amazing! 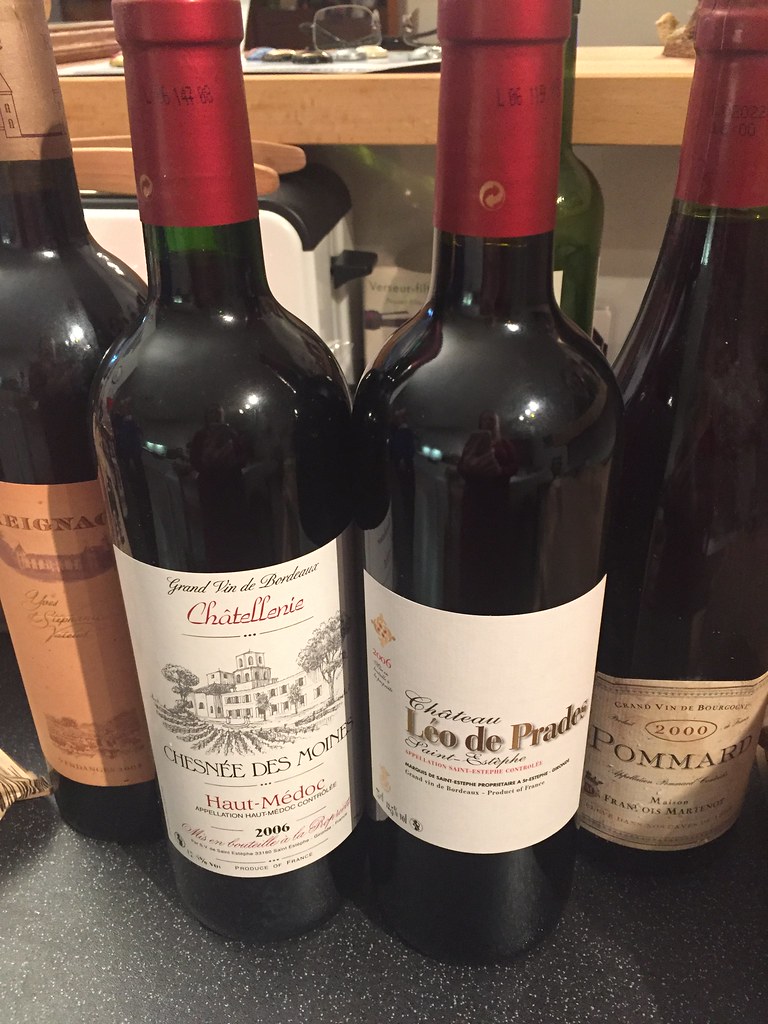 Fresh shucked oysters, smoked salmon, foie gras, an over-the-top seafood gratinee, salad, cheese board, and a Bouche de Noel. A different wine was poured with each course and they were all fantastic. 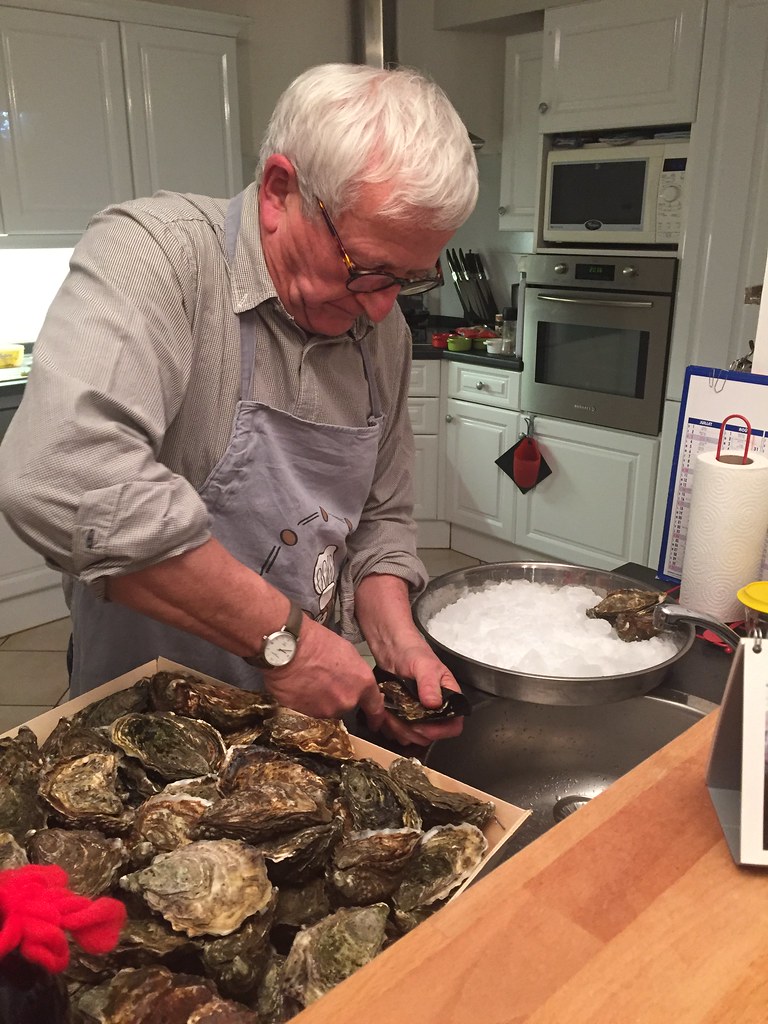 It was also during this dinner that I noticed that the parents were using their shuttered kitchen window ledge as a side-board of sorts. Dishes and wine were set out on the cool ledge until they were ready to be served. They were constantly getting up from the table only to return with some new platter of deliciousness or another fantastic wine. I dubbed this the magic window, something I desperately wish I had!
At midnight we opened champagne and toasted not just Christmas, but (rightly named) Guy-Noel's birthday! Christmas and birthday presents were passed and it was 2am before we called it a night. 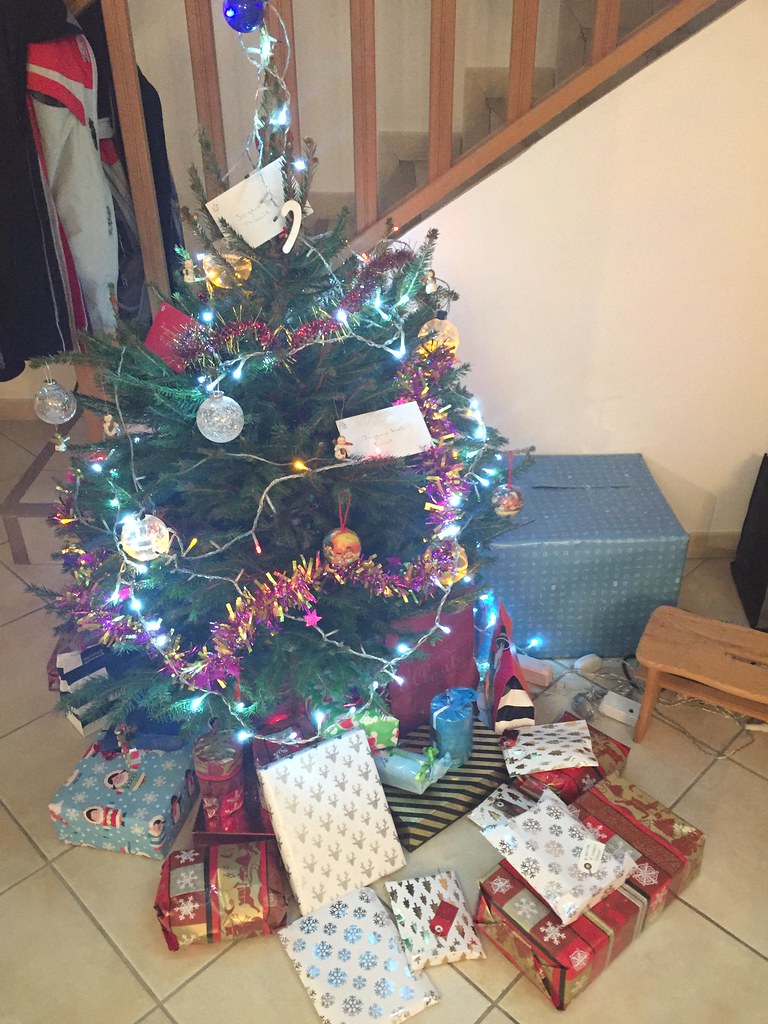 Forest and I had another bedtime chat, recounting the day filled with laughs and cheer, before turning in.

Early Christmas morning Forest and I snuck downstairs and planted stockings for everyone. This isn't a tradition for the French, so we were excited to bring a little America to the house.

Once everyone woke up we pointed out that there seemed to be more under the tree and everyone had a great time opening the little gifts tucked in their stockings. 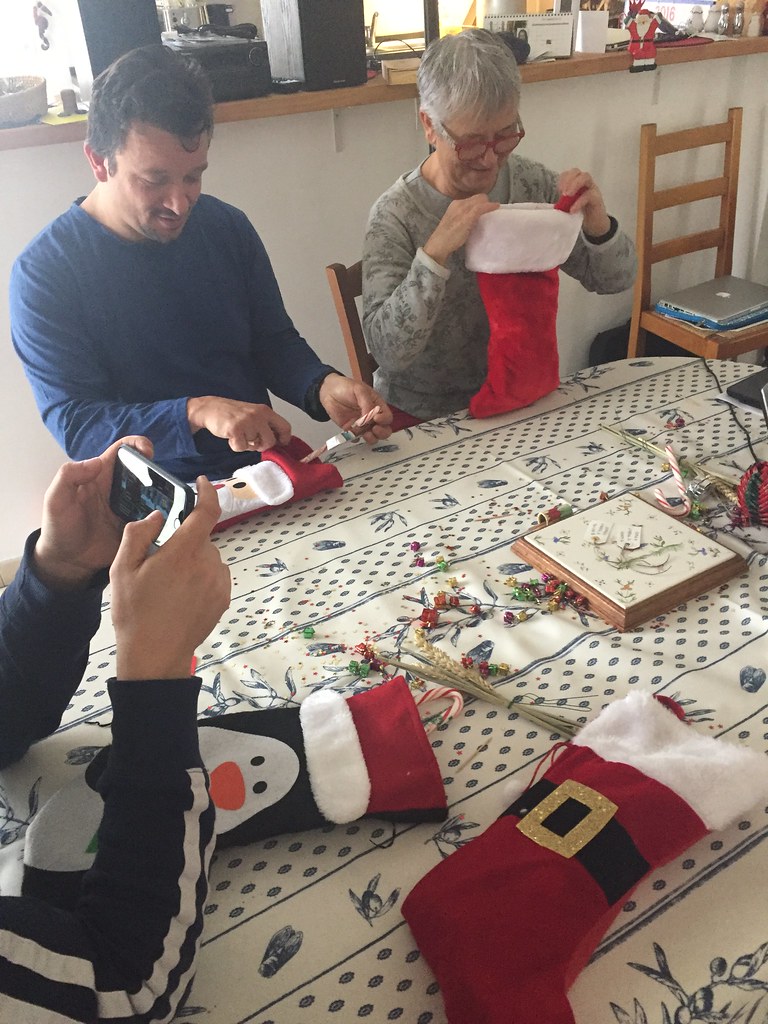 The day was spent lazily in our pj's, each of us reading, surfing the internet, playing games, etc. Something both cultures have in common on a holiday! Guy Noël & Mary Jo started prepping lunch and after repeatedly offering to help, MJ finally sat down at the dining table with a bag of gorgeous fresh beans and paring knives for Forest and I. She showed us how to cut the ends, using our thumb as a guide and then cut them into three equal lengths.

Now most of you know that I am no stranger to a kitchen, cooking, and knife work. But I'm not in the habit of pressing a knife repeatedly against my thumb! I was so nervous that I was going to cut myself that I was working extremely slow. MJ finally asked Forest in French (she speaks very limited English) if I had ever used a knife before! LOL!!!!!! When Forest explained that we are use to using cutting boards she immediately tried to remedy the situation but we told her no. There's nothing I wanted to do more than to cut those beans in that fashion at that table with those women. That and hopefully not bleed on anything!

The magic window and the parents produced another incredible meal. Christmas lunch featured salmon, foie gras, a Chapon poulet (a special breed of chicken I had learned about at the market), beans, cardoons, cheese, salad, Bouche de Noel, and wine, wine, wine! 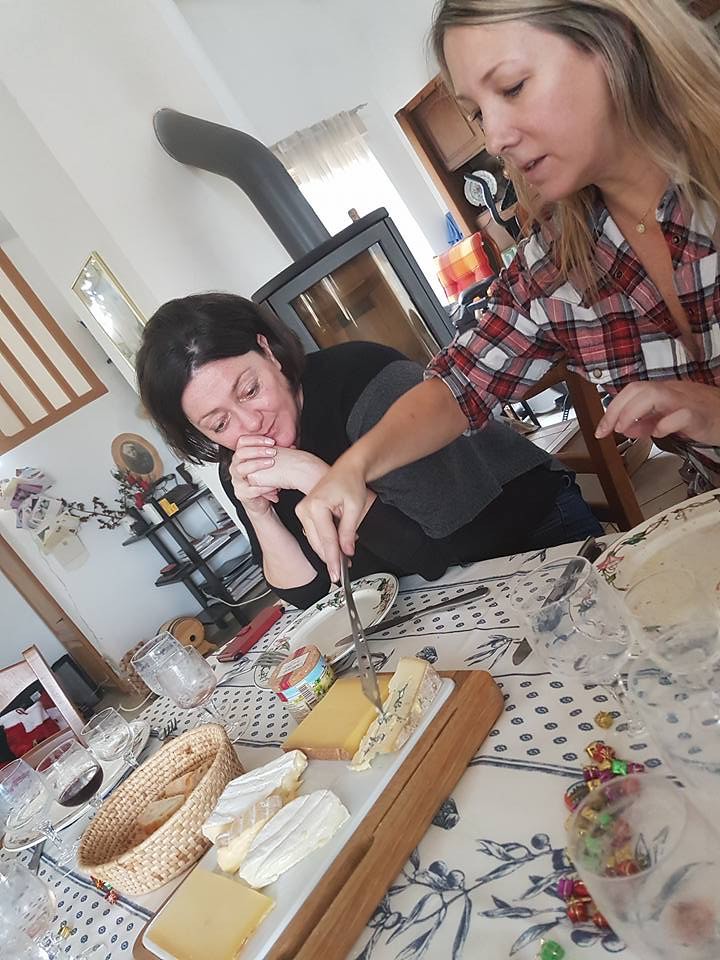 After lunch I headed out with the family for a walk around their town at dusk. It was so relaxing, and some much needed movement away from the dinner table! We passed vineyards planted with gamay, beautiful stone houses, the town center, and an old chateau which I think Guy Noël told me is now a culinary school. 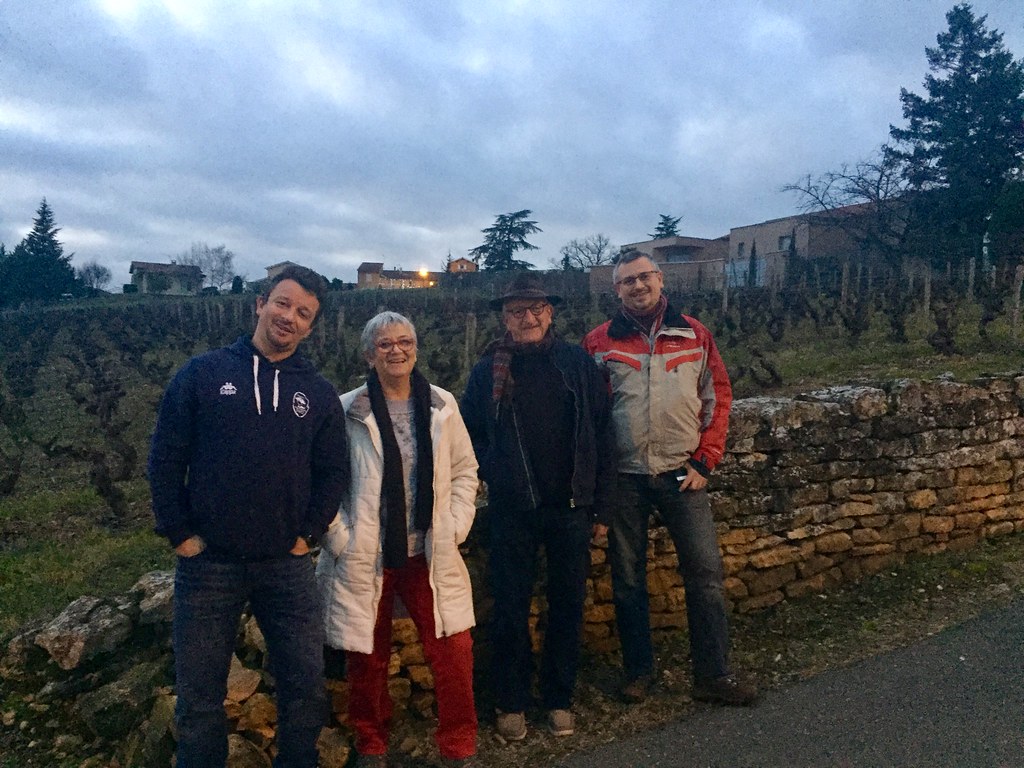 When we returned Guy-Noël gave Forest and I a wonderful tour of his wine cellar before we sat down to a "light" dinner of potatoes, sausage, salad, and cheese. 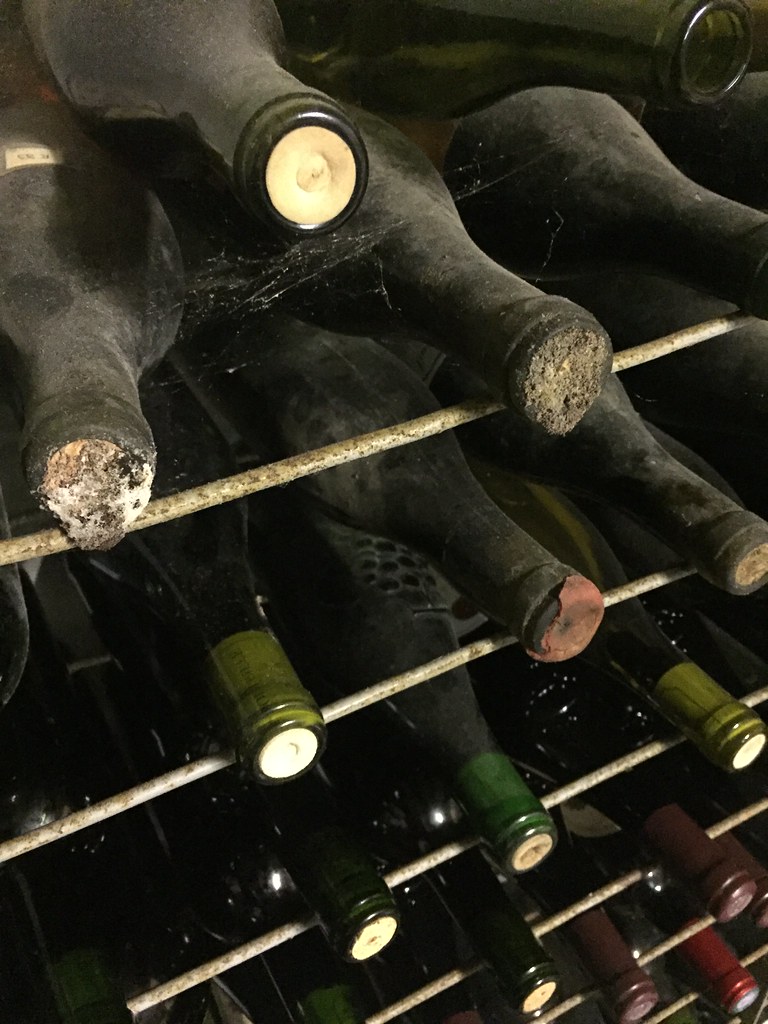 These parents were such a joy to be around, and not just because they fed me and poured me wine non-stop! They are funny, and smart, and spend their time talking and singing and laughing. I couldn't have been more honored to be a part of the celebrations. 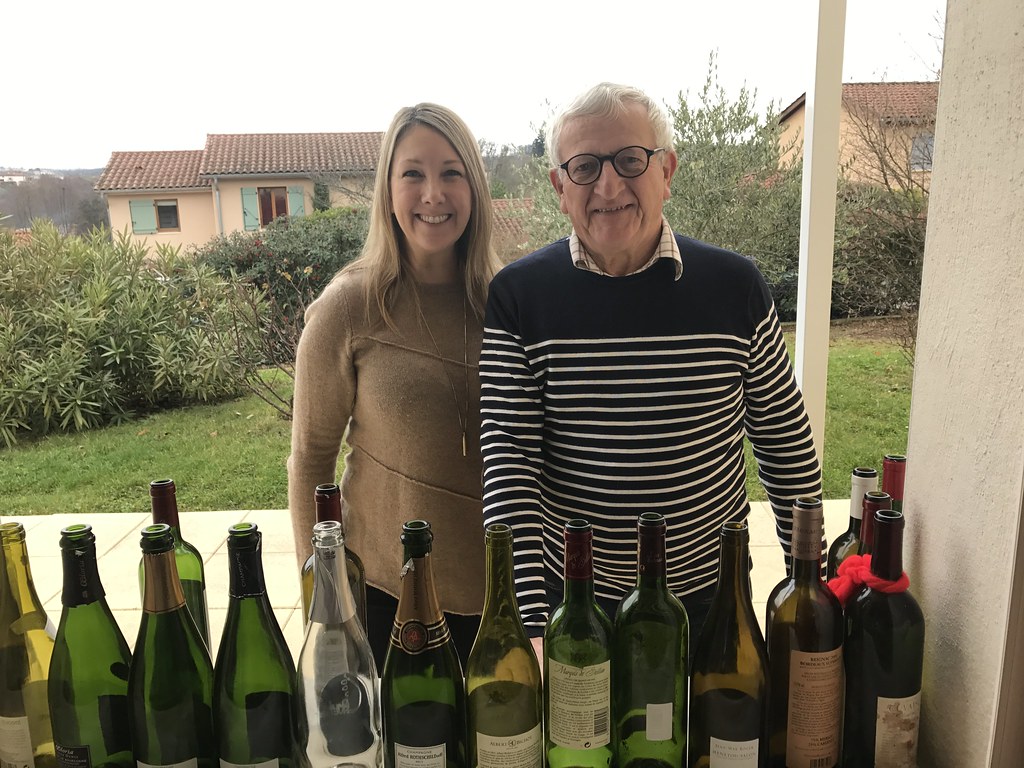 Thibault, Forest, and I packed our bags the next morning and sat down for one last lovely lunch with the family before loading up the car. Guy-Noël kindly drove us to Lyon where we caught the train to Charles de Gaul airport.

The official start of our annual New Year's Eve trip was underway and we had a flight to Lithuania to catch!

Other posts from this trip:
36 Hour Parisian Birthday Party
Baltic Bash Kick Off
Out and About in Lithuania
A Very Baltic New Year
Latvian Eats & Drinks