A Night at The Aviary

It was day 3 of our 5-day Chicago girl's trip (the first two are here) and we spent the morning sleeping in, chilling in our pjs, eating delicious Girl and the Goat leftovers, and catching up. This is what I find so perfect about having an Airbnb instead of a hotel room.

We had passed a cute cafe called Cellar Door Provisions on our way to Fat Rice the other day and Jesse had told us they had delicious bread and butter, which we thought sounded like a nice afternoon snack and excuse to take a walk in the beautiful fall sun. 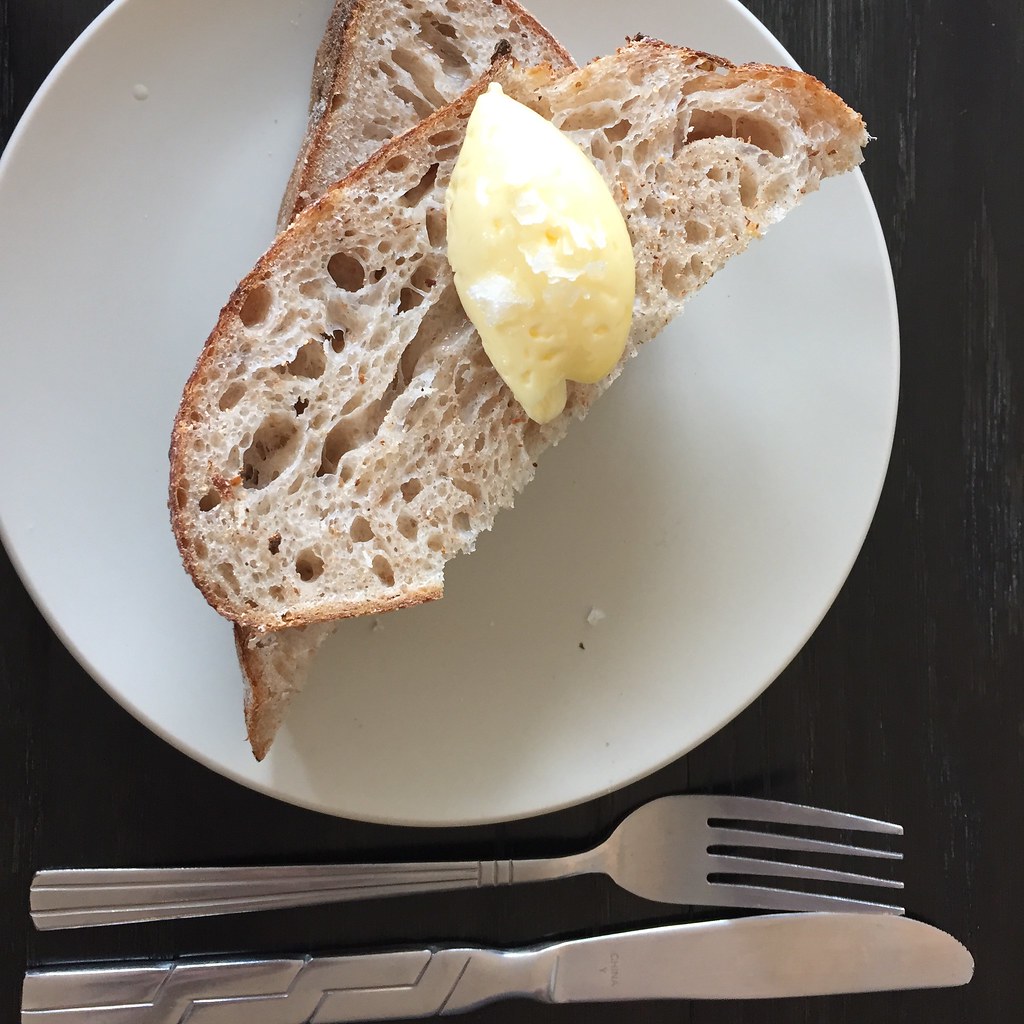 We had big plans that evening and we were all very excited. We had booked the kitchen table at The Aviary. We didn't fully know what to expect but as I have experienced Chef Achatz's cuisine before (owner/chef of Alinea) I knew we were in for a treat. 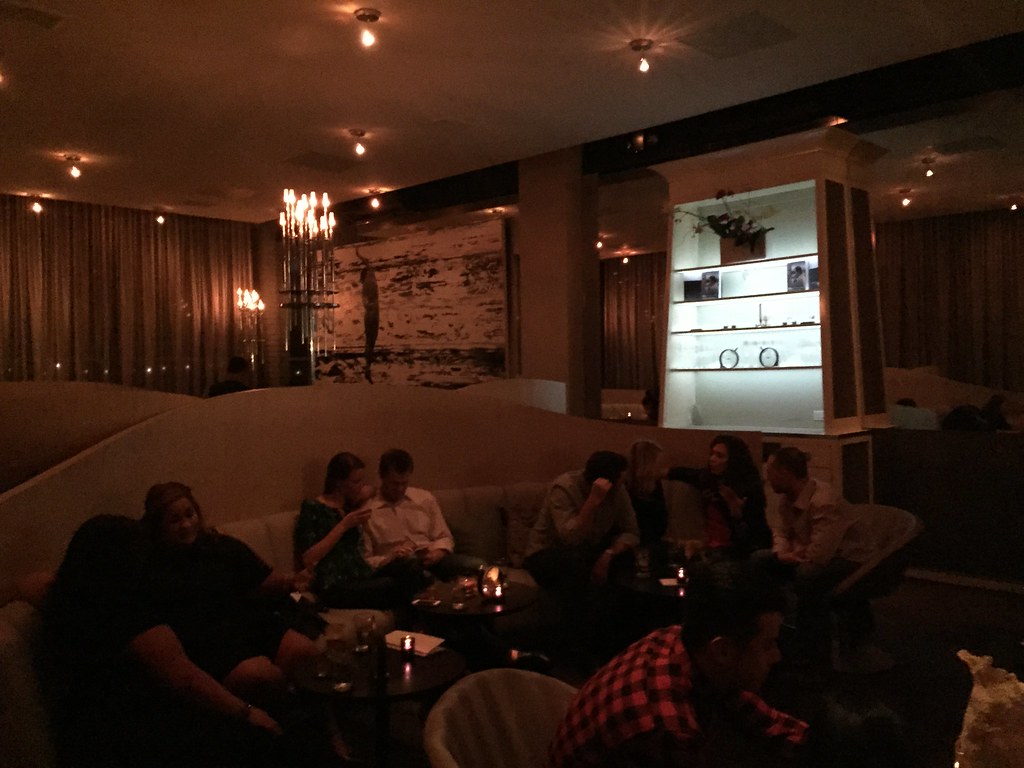 When we arrived there was a small queue outside. We checked in with the host and were shown inside the low lit and very elegant space. And then they walked us inside the kitchen to the only table, which faced the kitchen stations. We all were just about giddy! I'm giddy remembering it even now! 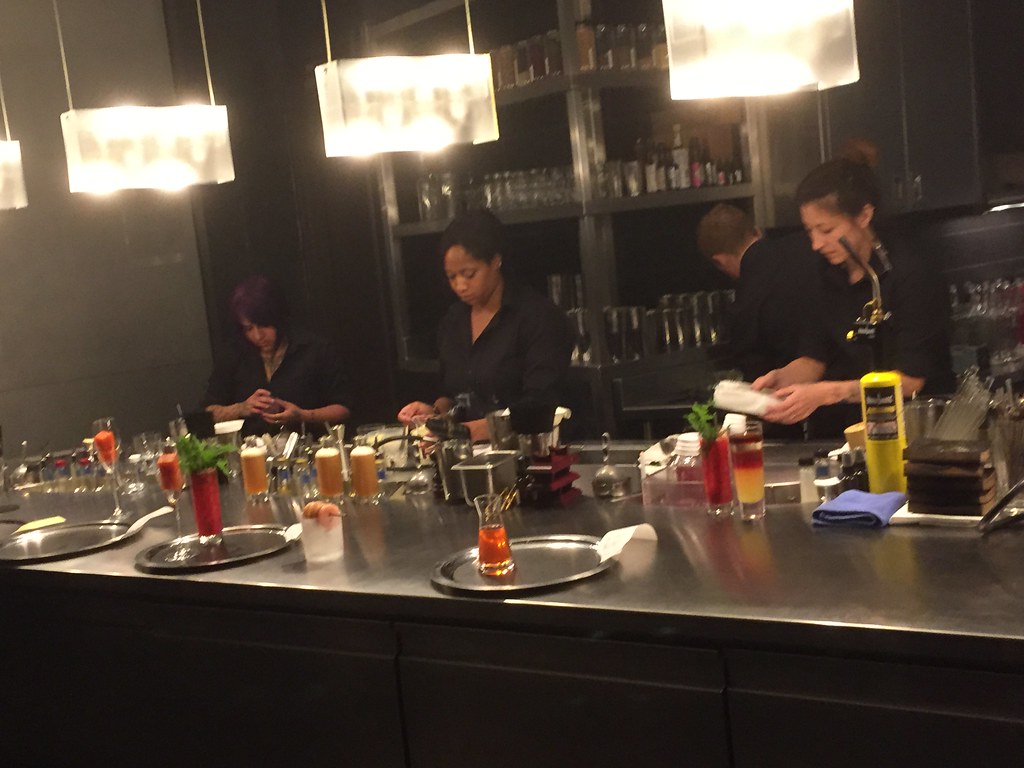 The kitchen table comes with a tasting menu, 8 cocktails (not including the amuse) each paired with a bite. EIGHT COCKTAILS!!!

We started with a small amuse of Apple Jack, falernum, sherry, and vermouth served neat. It was a perfect little sipper while we took in everything going on around us. And there was a lot going on! Our server then brought out our first snack called Salt & Vinegar. 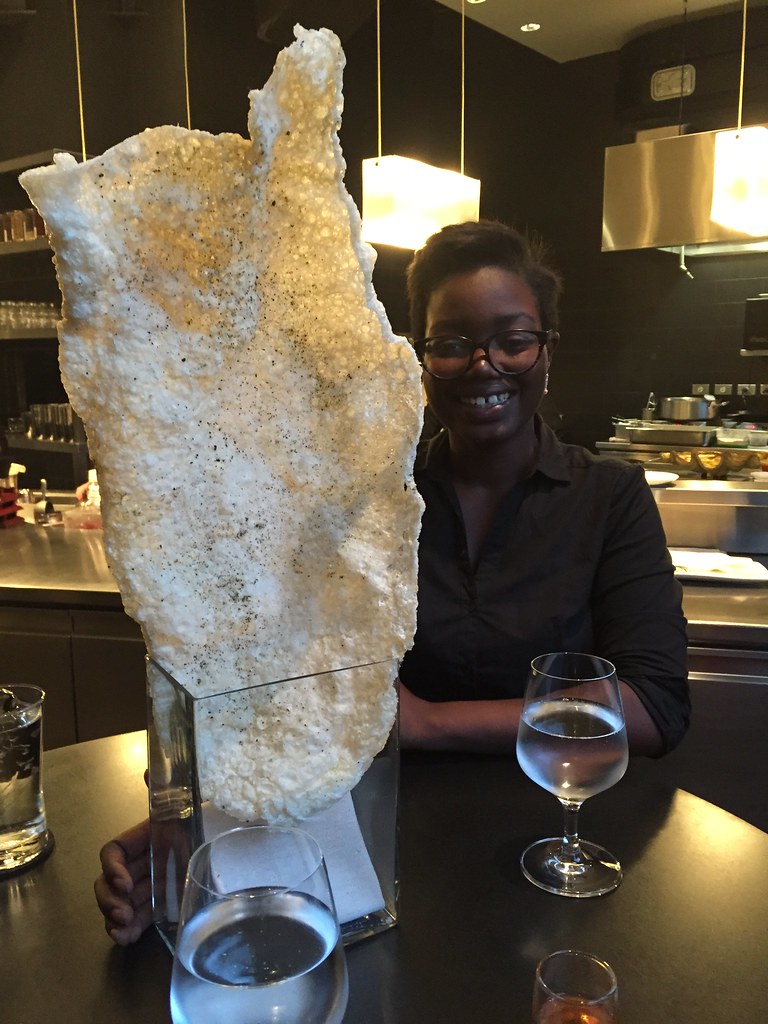 That is a very normal height woman bringing us the largest pork rind I have ever seen! The cocktail, Espelette You Finish, featured ice cubes made with espelette pepper that melted slowly into the drink of Aperol, chartreuse, rosé, gin, and strawberry. Refreshing with a little spice at the end! 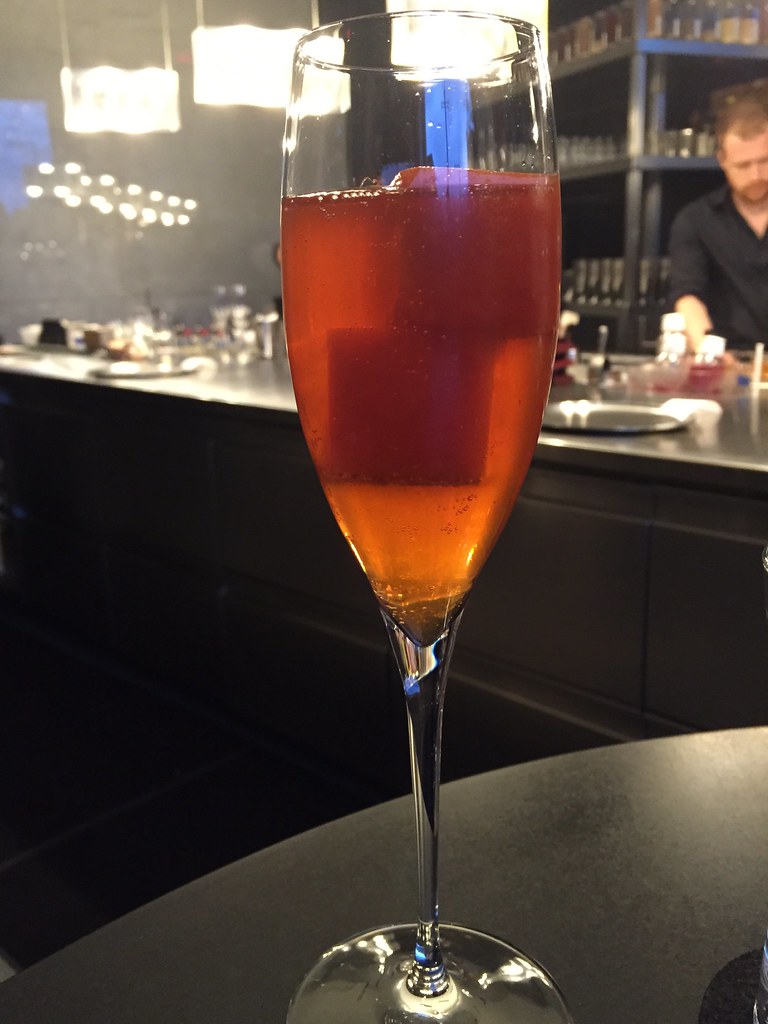 The Green Chile cocktail was served in a bottle, not my favorite presentation but a delicious beverage of clarified lime, tequila, chartreuse, and mezcal. It was served with this beautiful dish called simply Roasted Tomato. 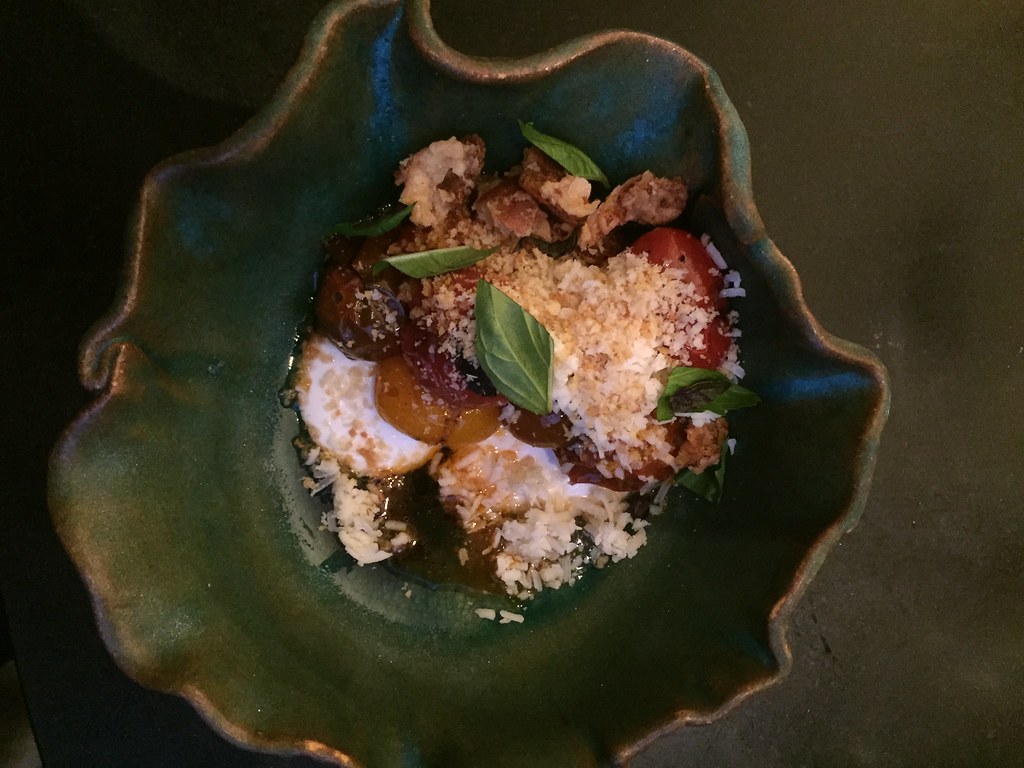 The Hollow was served from this amazing clear vessel. The drink, an infused blend of honeybush, fennel, ginger, saffron, and whiskey, was very aromatic and lighter than I expected. It was served with a perfect deep fried bite of takoyaki. 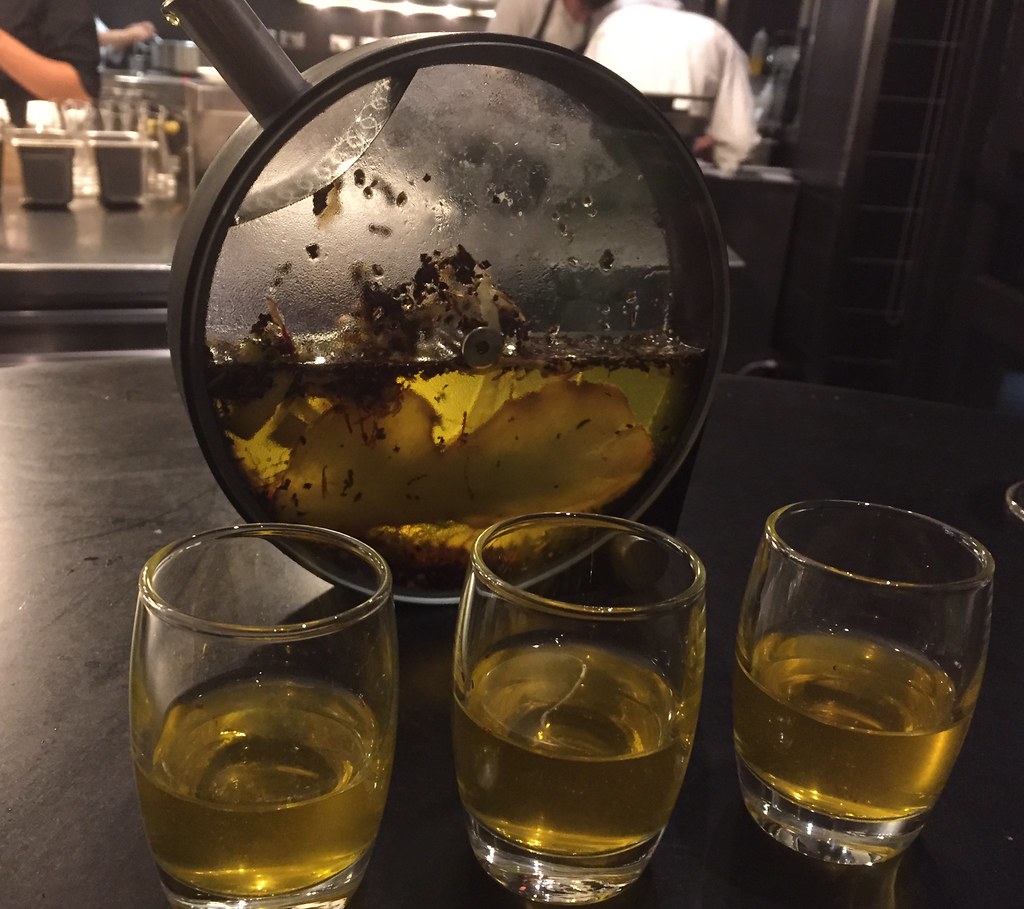 Fourth-course, O'Doyle Rules. A bite of fried banana was served alongside the cocktail of clarified banana, curry, rum, and cognac. Yum. 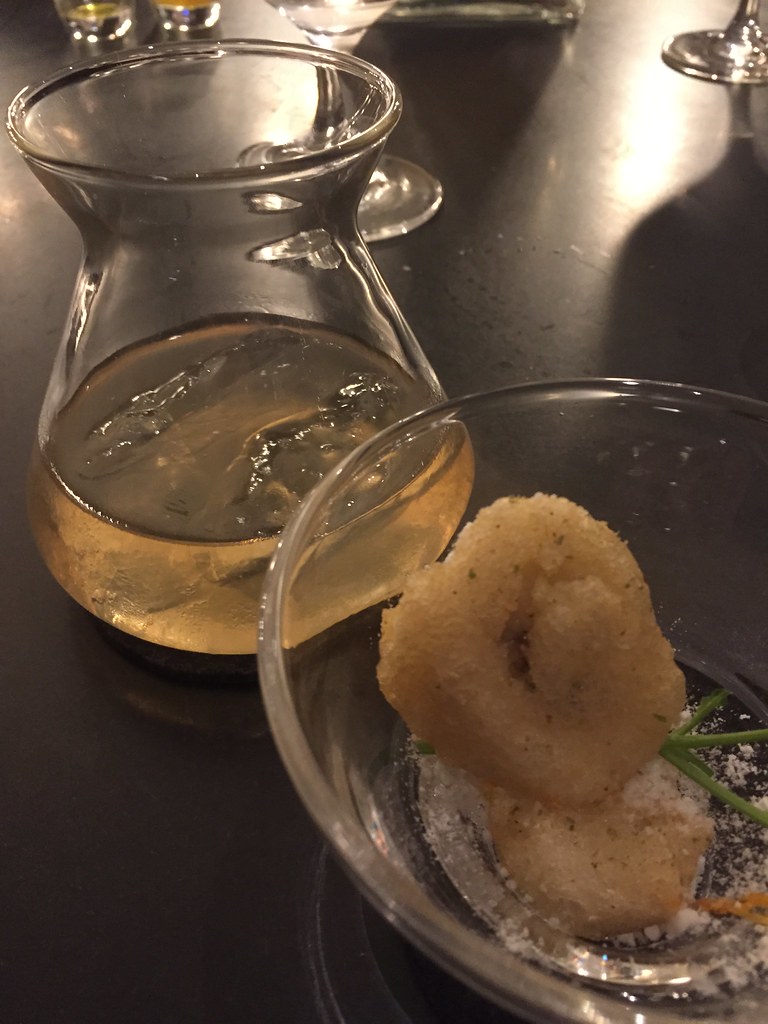 Next, a closed chest arrived at our table and was opened to reveal three smoking drinks served neat. Infernal Imagery was smoke, Barolo, Maurin Quina, and rhum. A luscious king crab salad accompanied. 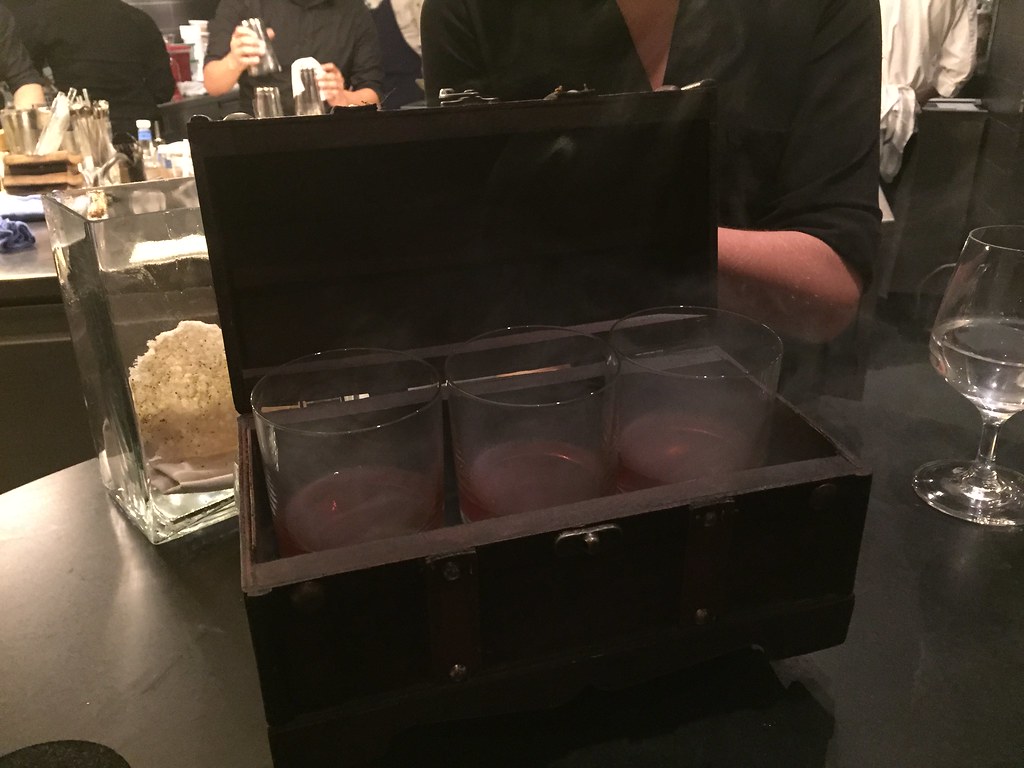 Frank Mackey was served next; Thai long pepper, mushroom, Zucca, and Magnolia rye on a beautiful rock. A bag of fried mushrooms with dips was served with it. 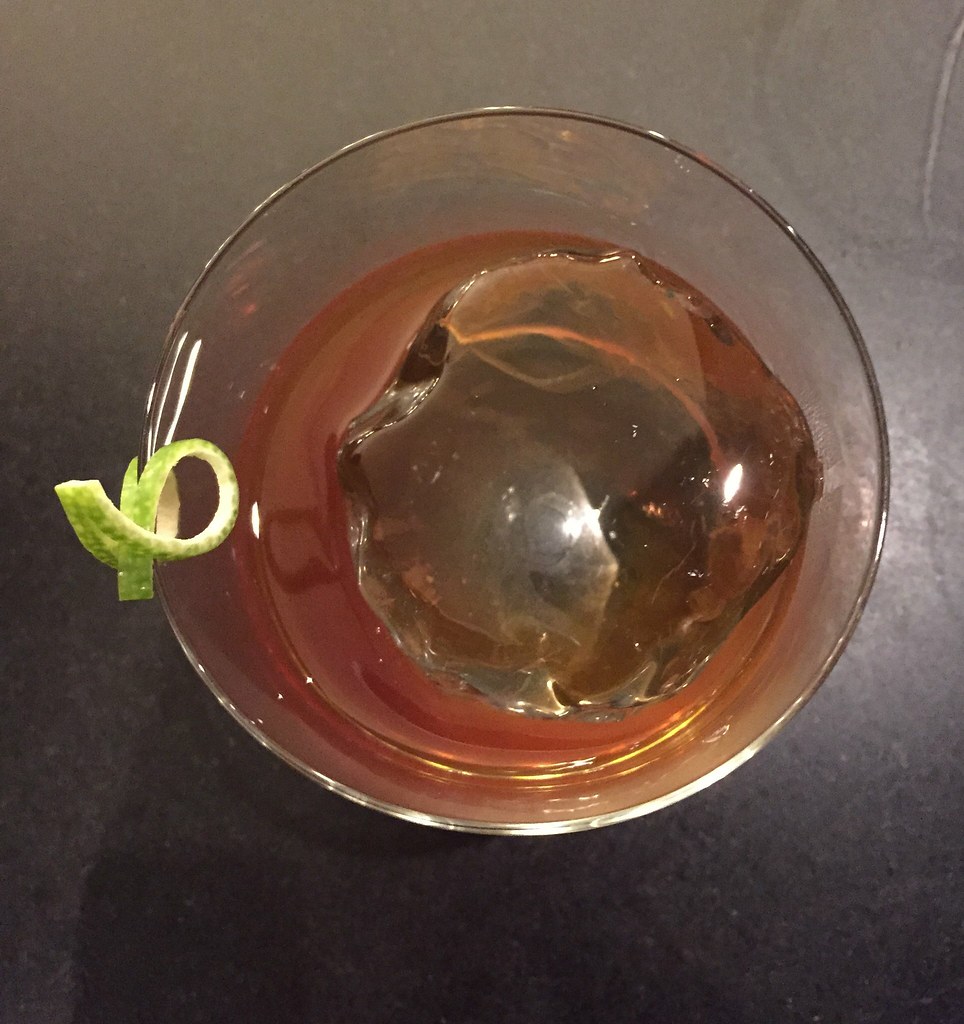 Second to last, the famous In the Rocks (fifth edition). This drink has seen a lot of press as it is fun, interactive, different, and delicious! Curacao, grenadine, dry vermouth and aged rum are suspended inside a frozen ice ball. They then give you a sling shot sort of device that you fit on the glass, stretch and release, which shatters the ice ball, releasing the cocktail. 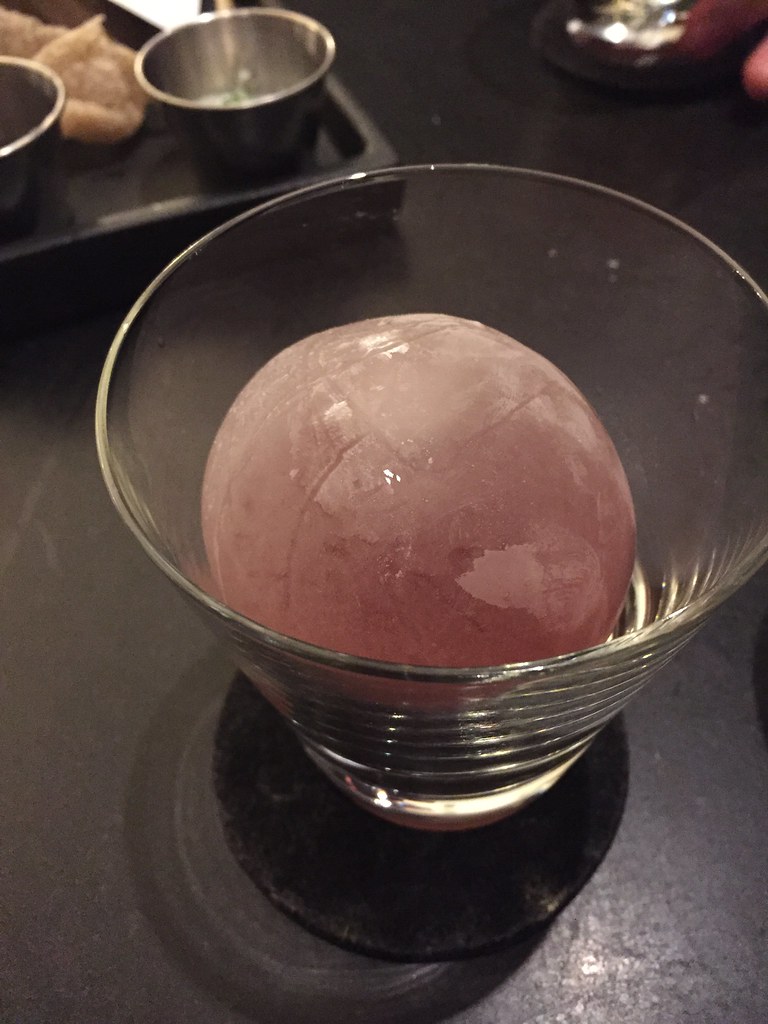 Once broken, no two cocktails look the same as the ice cracks differently depending on how people sling shot it. The most beautiful dessert was served alongside- Raspberry. 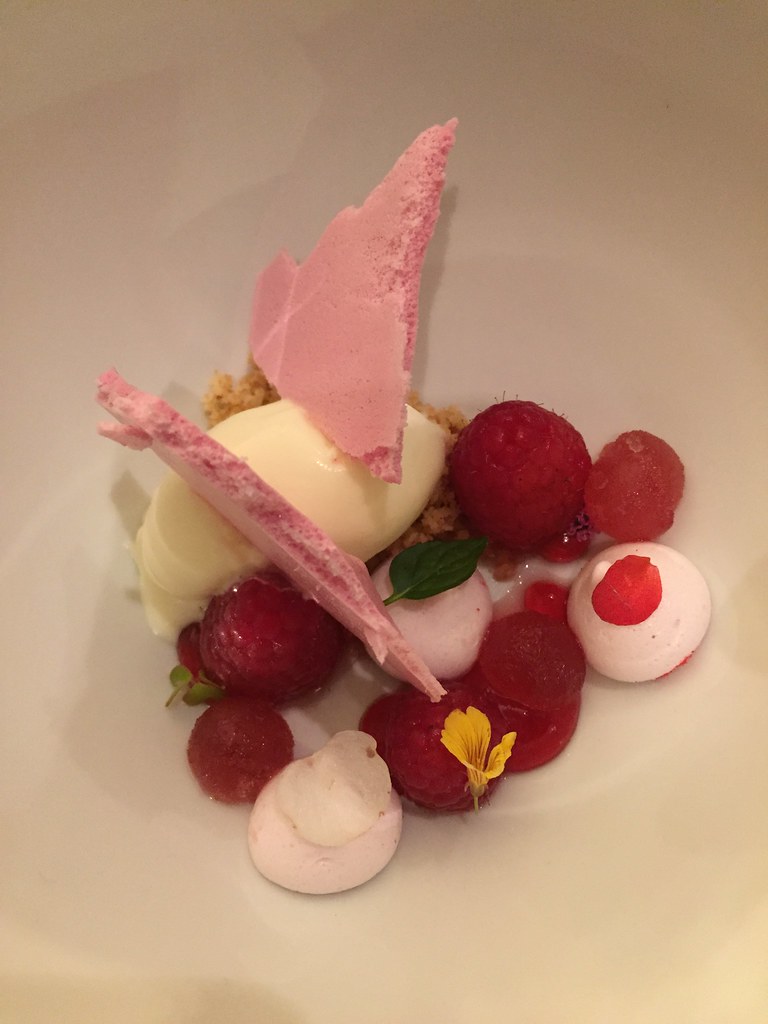 Our final course arrived inside of a plastic bag filled with smoke. The Rum Manhattan made with fenugreek, cacao, and sherry, was cut out and served tableside with a second dessert of "Bar Nuts". 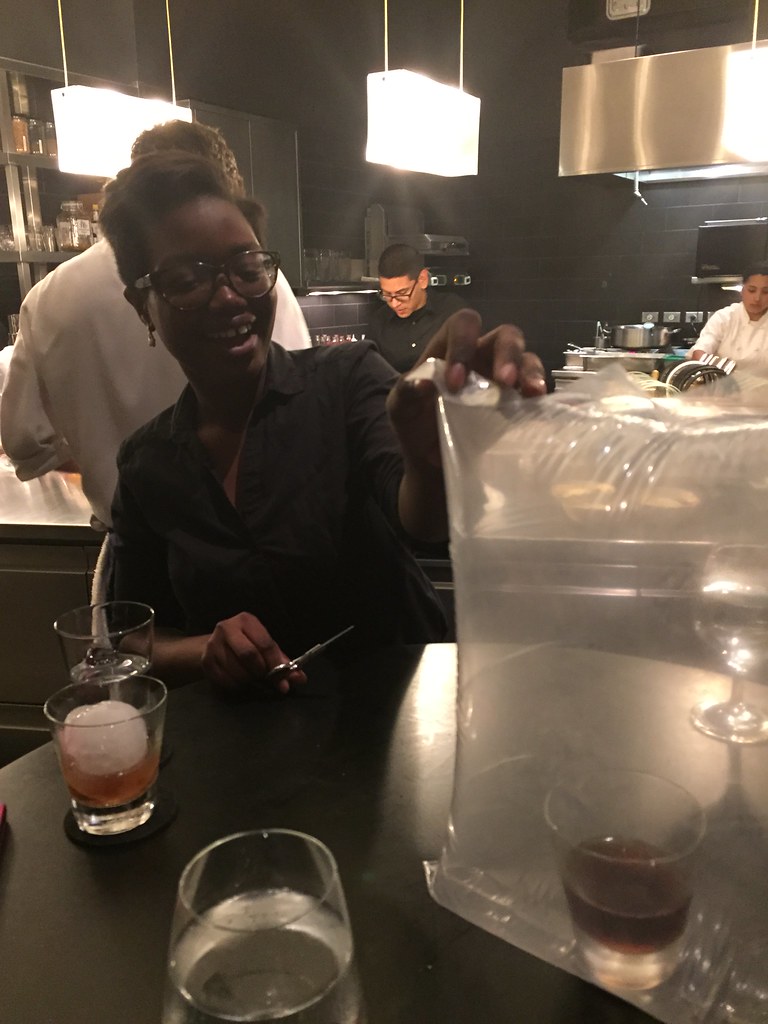 Our tasting menu ended with a little fried mignardises suspended on a strange contraption called Cheekie. This entire "event" was so much fun! Our reservation had been at 6pm and we were leaving 3 plus hours later.

You might think we would be a bit blasted by this point, but the drinks were fairly light and bites did a good job of soaking things up. I mean, we weren't stone cold sober mind you, but we held our own! 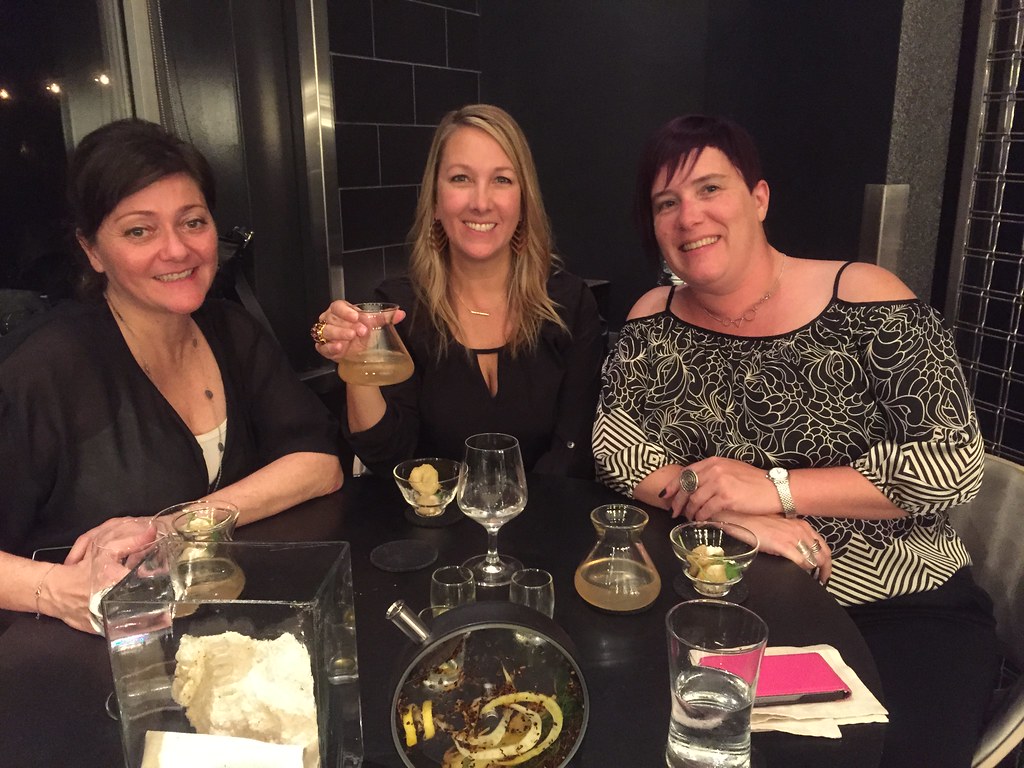 I highly recommend the kitchen table at Aviary, unless you don't drink of course!

Other posts from this trip:
Easing into Chicago
Culture and Cocktails in Chicago
Chicago Cocktail Crawl
at October 16, 2016