Oktoberfest. I'll admit it, the word brings to mind the scenes in National Lampoon's European Vacation. I really didn't know what to expect and now that I've seen it/done it I know there is no way I can ever come close to really explaining it to you. I have a lot of friends who grew up in Germany and they tried to prepare me for it but in the end you have to go and experience it for yourself. And you should, it's possibly one of the most fun experiences we have ever had- and we've had a few! 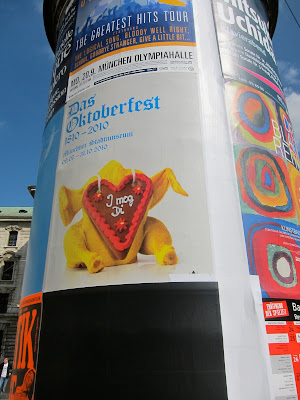 Let's start at the beginning. Our rented house was in Kaufering, a small Bavarian town about 40 mins by train outside of Munich. We road in at 10:30am on a train packed full of locals from other outlying towns dressed in their lederhosen & dirndl, drinking bottled Radlers and Colabier (yep, half coke half beer- tastes strangely of cherry coke). You could tell everyone was having a great time and in a good mood- it was opening weekend of Oktoberfest, the 200th anniversary. 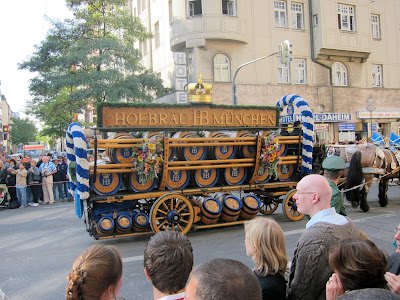 We started our day at the Riflemans & Costume Parade which is a 2 hour fashion show of the Bavarian people's dress, bands, weaponry and of course beer. It was really cool to see all the different regions represented, the decorated lederhosen & dirndl and the huge horses pulling carts loaded with beer barrels. 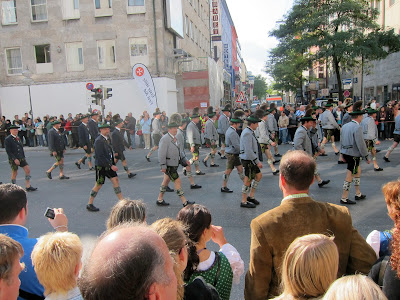 After a nice lunch we headed to the Theresienwiese on the bahn. A man asked me if it was my first time and when I said yes he replied "you'll never forget it". Amen. We exited off the train in a crush of people all heading up the escalators towards the light finding ourselves face to face with the huge fairgrounds and approximately 300-400k people. Holy hell!! I think we were all in shock for a minute. We walked around trying to take it all in but it was impossible and completely mind boggling. 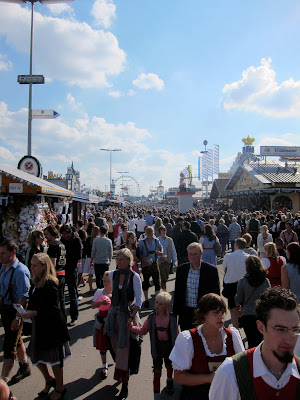 We found our tent- we had reservations at the Haufbrauhaus Tent which is the largest tent at the festival holding over 9k people inside, upstairs and outside- and found the guy who's table we were buying seats at. There were 12 of us total and he led us inside and through the maze of people to our table. It was a MADHOUSE! And it was only 4pm. We were so happy to sit and just take it all in, an incredible site. 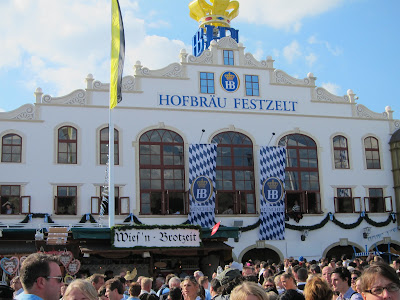 The tent was gigantic and beautiful. There was just a constant din of noise even when the band wasn't playing. But as soon as the music started all 6,000 people inside started to sing and bang steins and stand on their benches. Controlled mayhem as I've never encountered. I literally had bruises on both my hands from holding heavy steins all night. 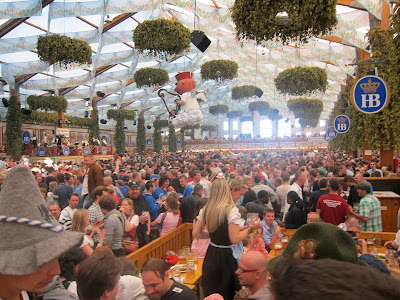 Our table mates were all Americans, this wasn't their first time as it was ours and they were a blast to be with. The steins of beer kept coming and the band kept playing and all of a sudden we realized we had committed the biggest sin at Oktoberfest, we hadn't ordered or eaten our 1/2 chickens! Our lunch was long gone and as day turned to night there would be no opportunity to eat with every person now on their benches and tables. Duh! Rookie mistake. 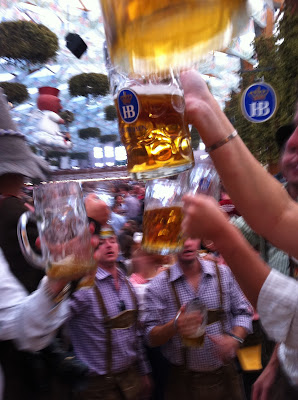 The table of German's next to us were fun and friendly and the girls taught Dayne the words to the German song Ein Prosit and me the words and dance to Fliegerlied. Of course everyone knew the words to the American songs that were so popular- Hey Baby, Sweet Home Alabama, Bohemian Rhapsody, What A Feeling

We left to catch our 10:30 train and ended up sharing seats with a group of local kids who had also been there. Their way of staying awake on the train ride home after drinking all day? Snuff! They all had their own snuff tins and the girls were very proud that they had apricot flavored while the boys had menthol. Crazy. 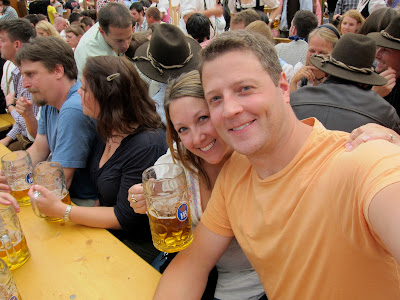