This vacation was all about hanging out in the sun and unplugging. I think Turks & Caicos is perfect for that. I could stare out at the amazing aqua waters, white sands, and attention grabbing sunsets for days on end; which is exactly what I did. 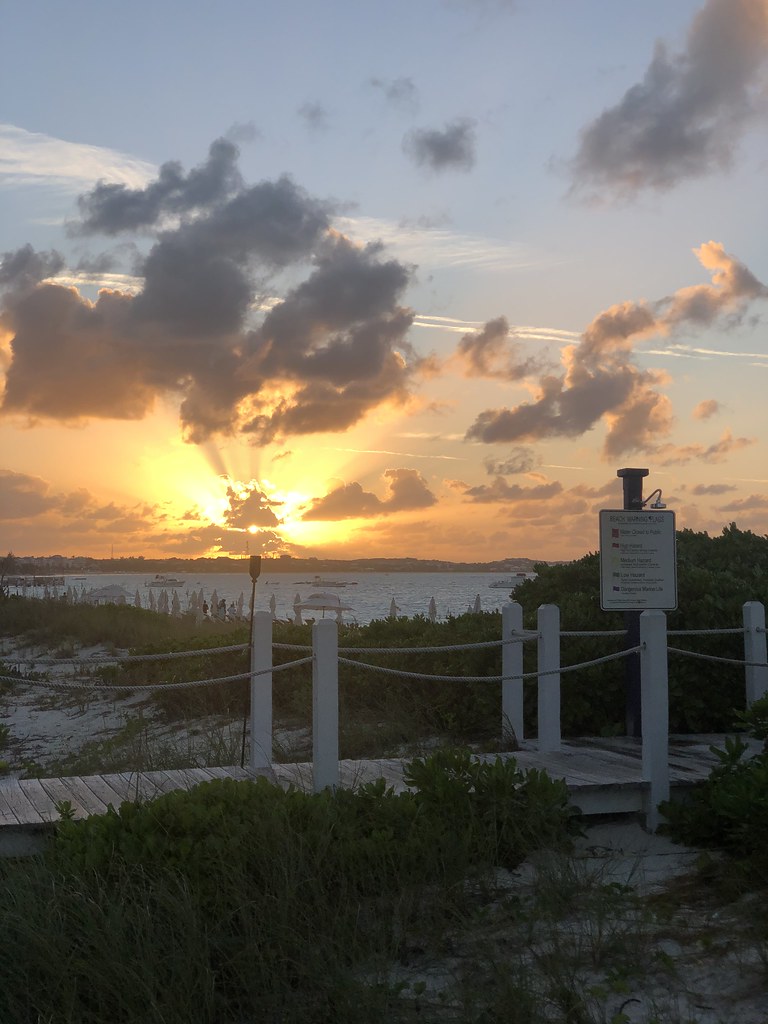 But I did stop staring from time to time! Our 2nd night spent on the island was not only Thanksgiving but it was a Thursday. Every Thursday night Provo has a big fish fry, where locals and tourists alike show up at Bight Park starting at 5:30pm.

We didn't expect such a big party, but that is exactly what it was! On the main stage there was a very good band that had most people dancing. Later, musicians would parade thru the crowds. Various craft vendors had tables set up to sell their wares, and there were probably around a half a dozen food vendors selling fried fish, conch fritters, local lobster, etc.

You can also get rum punch which is very strong and very good. We tried a few!

One afternoon we booked a cruise with Caicos Dream Tours. We were picked up in the lobby of the Palms around 1:30pm and driven to their office and boat dock on the other side of the island. We were fitted for snorkeling gear before boarding our boat Dream Chaser, a 45 ft Corinthian Catamaran that holds about 50 people. 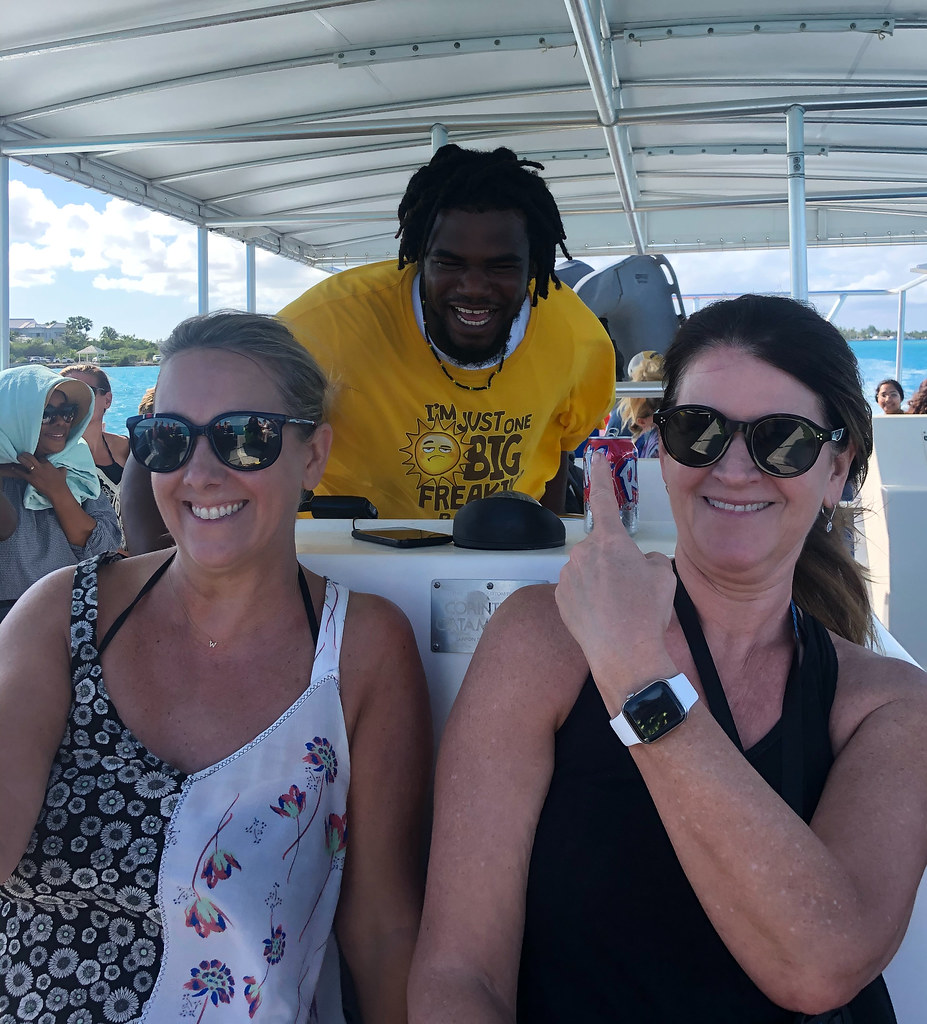 The crew were all about having a good time and making sure everyone else did too. Gail and I had great seats right in front of the captain which gave us incredible views of everything around. The color of the sea was just amazing! 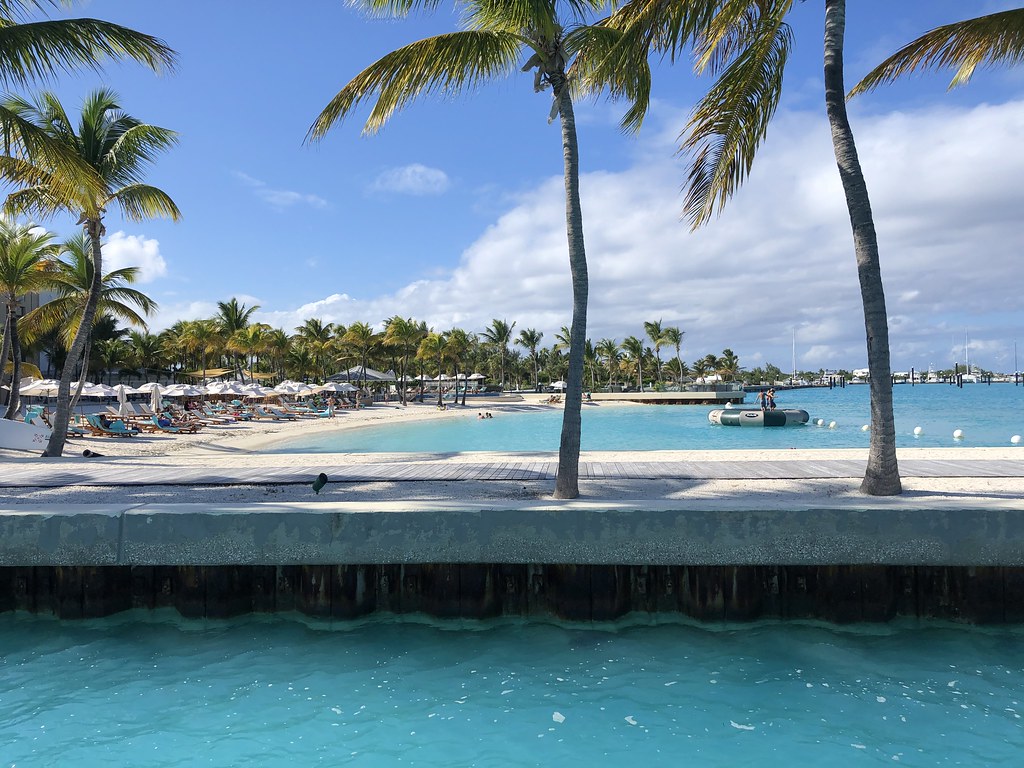 It was sunny and warm but the wind and water were too rough for the normal snorkeling stop of the barrier reef; really too bad as it is the 3rd largest in the world and suppose to be gorgeous. Instead we headed to the shipwreck, La Famille Express, which during Hurricane Frances in 2004 dragged its anchor 12 miles in the high winds until getting stuck for good in the shallow waters. 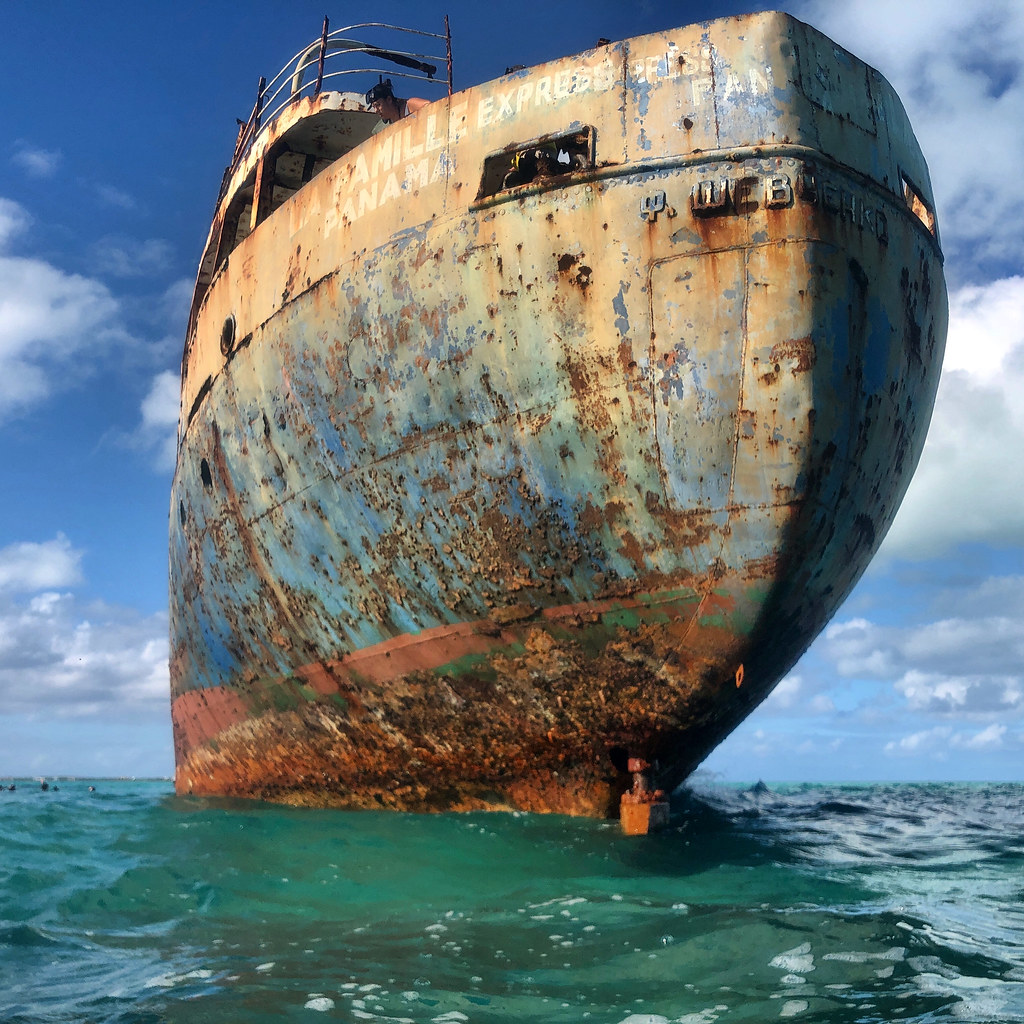 Although there wasn't much to see, except a few conch and some debris from the ship, including said anchor, it was a pretty cool thing to snorkel around it. It's so eerie looking! And of course many climbed the derelik and jumped into the ocean. I was not one of them! 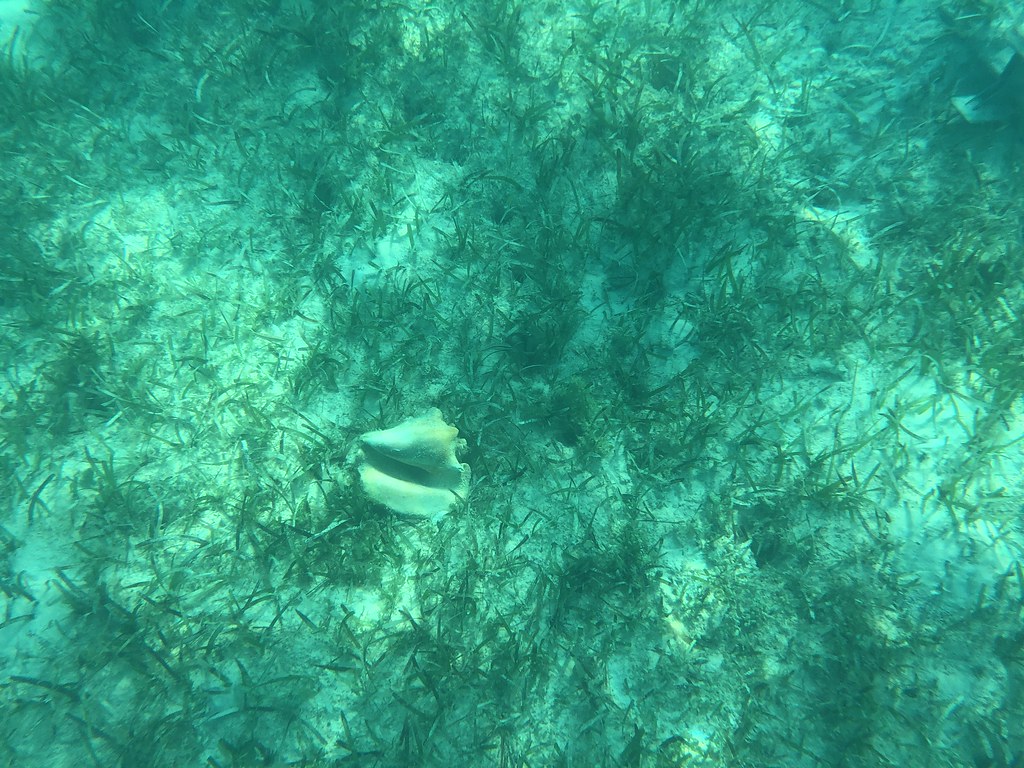 We continued on from here to Half Moon Bay which is a beautiful beach located between the islands of Little Water Cay and Water Cay. When we arrived the crew pulled some conch from the ocean in order to give everyone a demonstration of how to get them out of their shells. Conch are the local sea snails that are enjoyed by locals in a wide array of dishes, 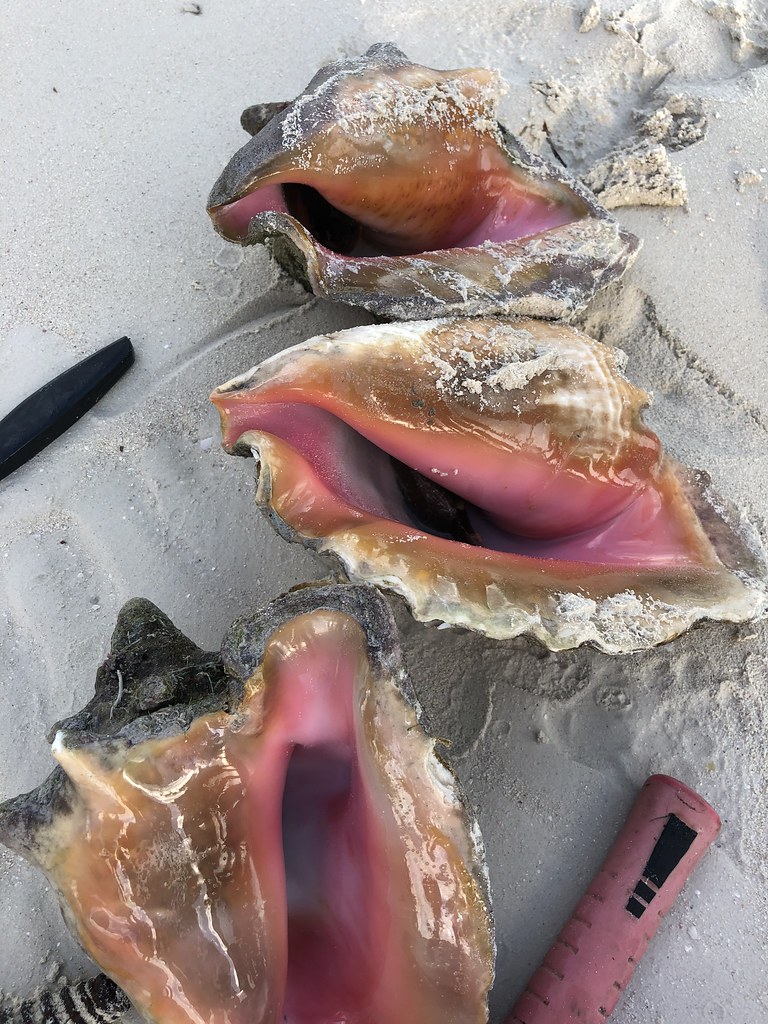 Everyone set off on their own to explore for a designated period of time. Gail and I crossed the small island, walking thru the dry bush and keeping our eyes open for Rock Iguanas who make their homes here. Unfortunately we only saw 3 even though we could see many trails that their tails made in the sand. We got to the other side and found Half Moon Bay to be absolutely stunning! And we even saw a surprise wedding proposal! 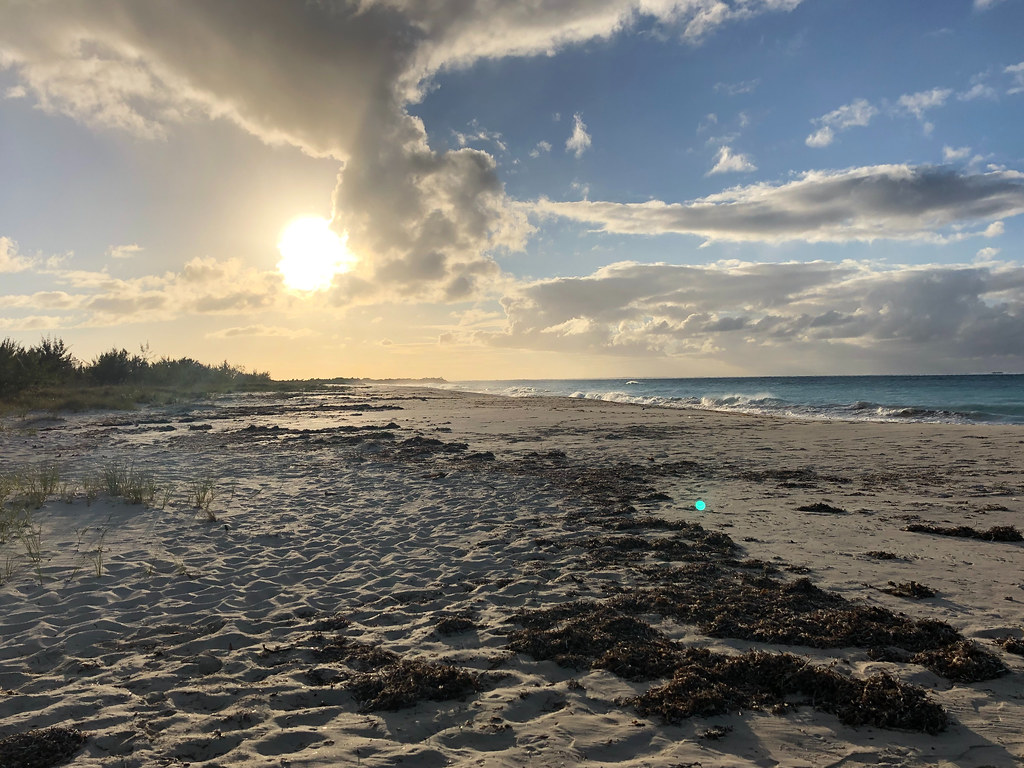 Back on the boat the crew had conch ceviche, rum punch, and beers for us. To be clear, there had already been beers and a lot of rum punch so really just the ceviche was a new addition!
As we made our way back the captain anchored at a nice protected spot and we all went down the boat's slide, splashing into the warm ocean right at sunset. It was super fun! I did it more than once!
Our cruise had been about 4 hours and by the time we got one of the shuttles back to our resort we were wiped out! So we ordered pizza delivered and had it in our dining room. Super fun day! 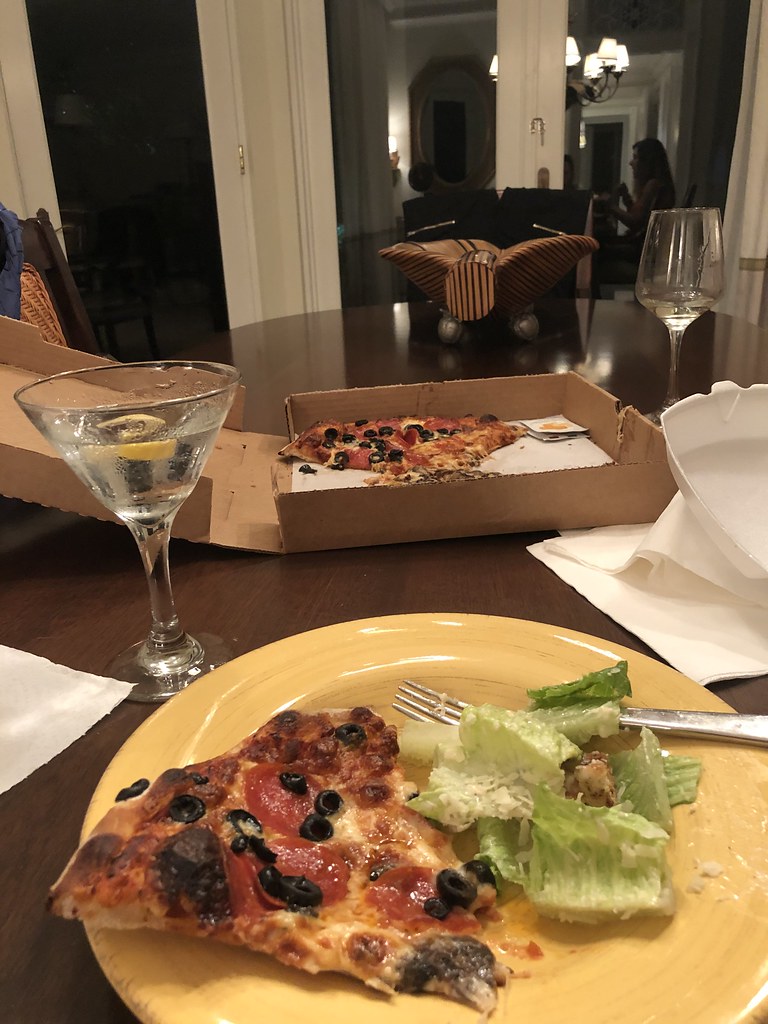 The Palms has free bikes to use so one afternoon we rode into town just to explore and also get some cash. Unfortunately we found very little in the way of shopping (besides your average tourist tchatche offerings). We also found the only ATM in town to be broken and ended up having to take a cash advance on a credit card back at the resort. We hadn't thought it would be so tough to get cash for tips, etc. Word to the wise!
That same afternoon we decided to grab a taxi and get to some other parts of the island. Our first stop was Turks Head Brewery which is very popular on the island. The brewery offers tours and tastings but we were just there for some souvenir shopping.
We had our own snorkel gear with us (borrowed from our resort) and had the taxi then take us to the Coral Gardens Resort. Their beach is known for their great snorkeling due to a reef close to shore and another farther out. 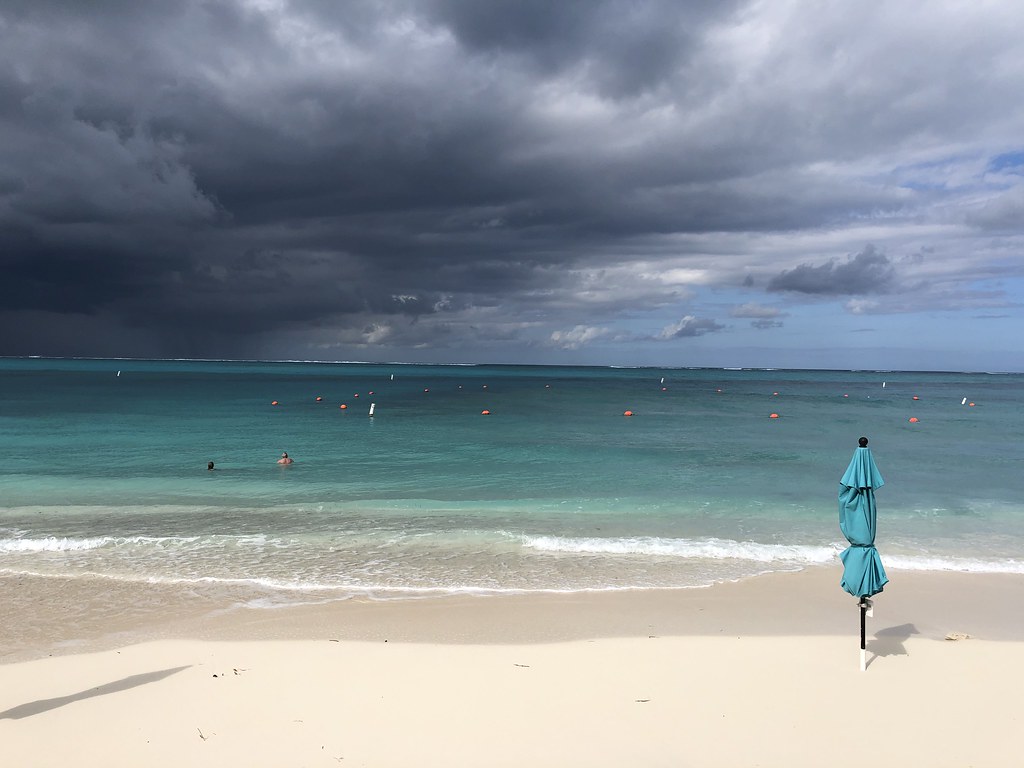 Unfortunately a very dramatic storm came up so we weren't in the water long! But this is a great spot for snorkelers of all levels as there is a rope around the reef that you can hold onto if you want.
We ducked out of the storm and into the resort's beachside cafe called Somewhere for lunch. Very cute spot with good food where you can eat with your toes in the sand. I had a local lobster roll and a couple of margaritas. Most of the leanings were tex-mex which was great for us. 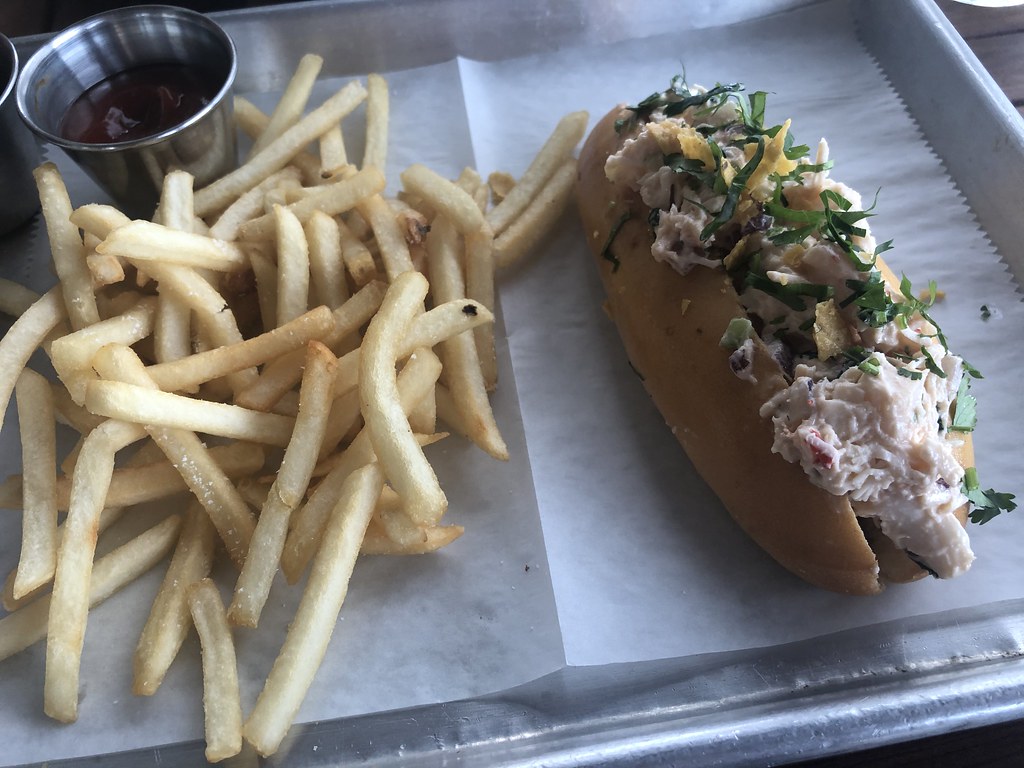 We also went into town for dinner on a few nights. At the very popular Coco Bistro you dine outside under a canopy of palm trees. It was lovely. 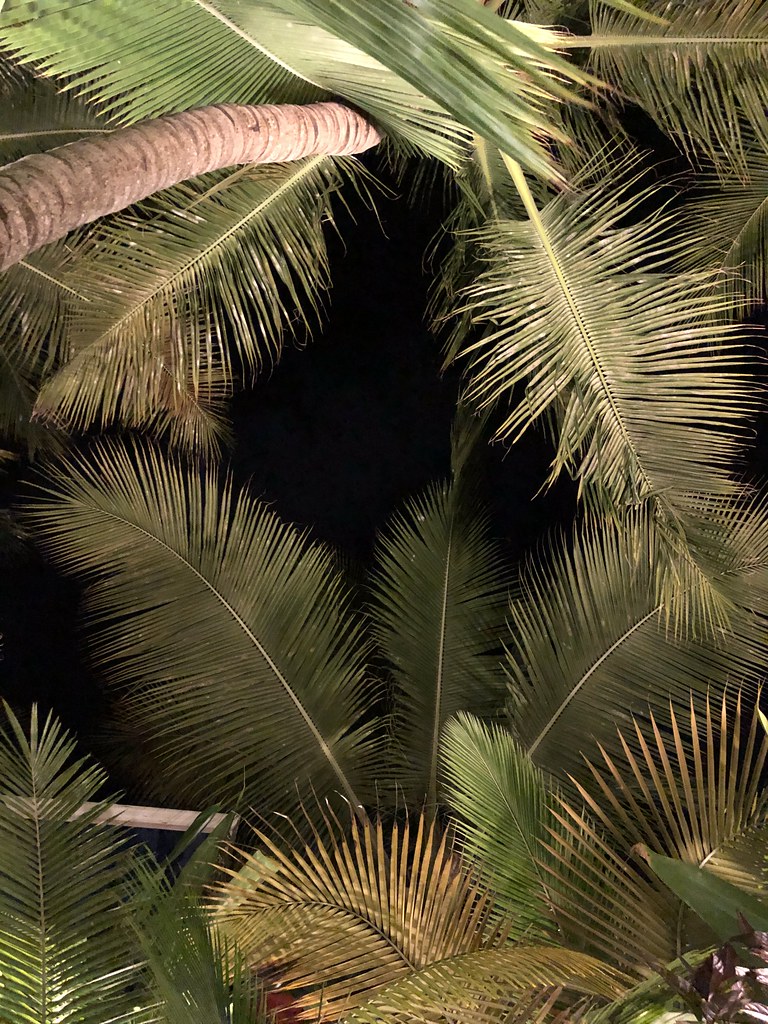 We hadn't thought to make reservations though so had to wait in the bar while a table freed up. The menu has lots of local seafood on it and also some traditional steakhouse offerings. I liked it!

Grace's Cottage at the Point Grace was very good and the bar area is absolutely Instagram worthy. 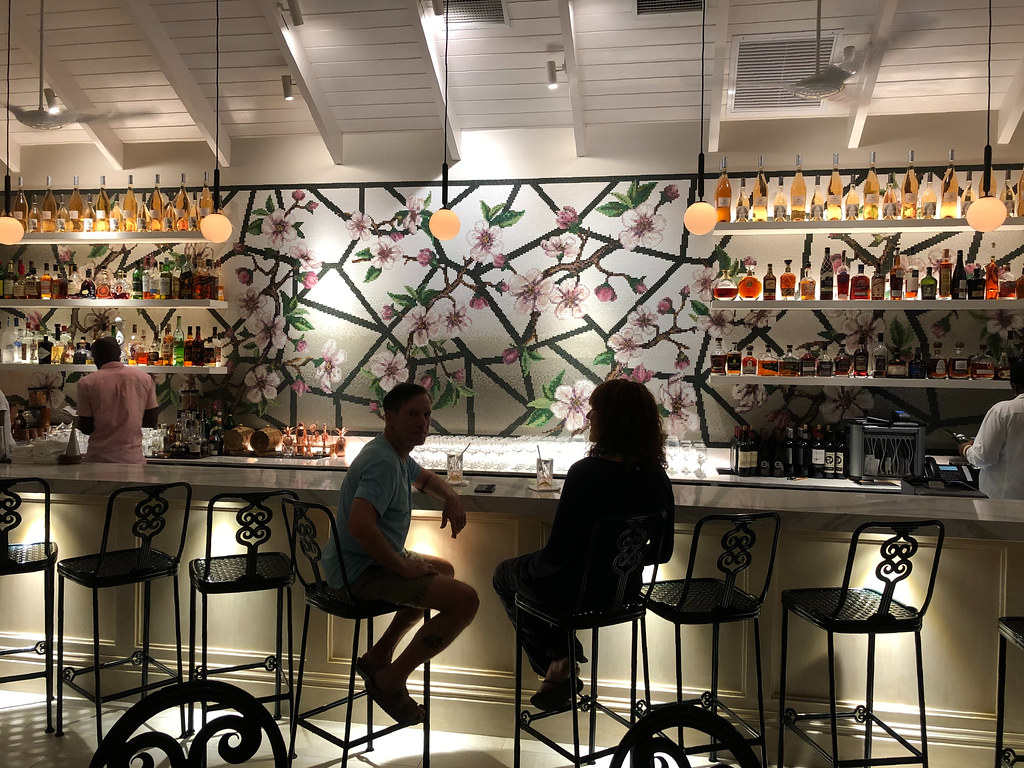 Our dinner here was lovely, even though we did not splurge on some of the cult wine highlighted on the fancy iPad wine list. Petrus in the Caribbean for $2k? Pass. 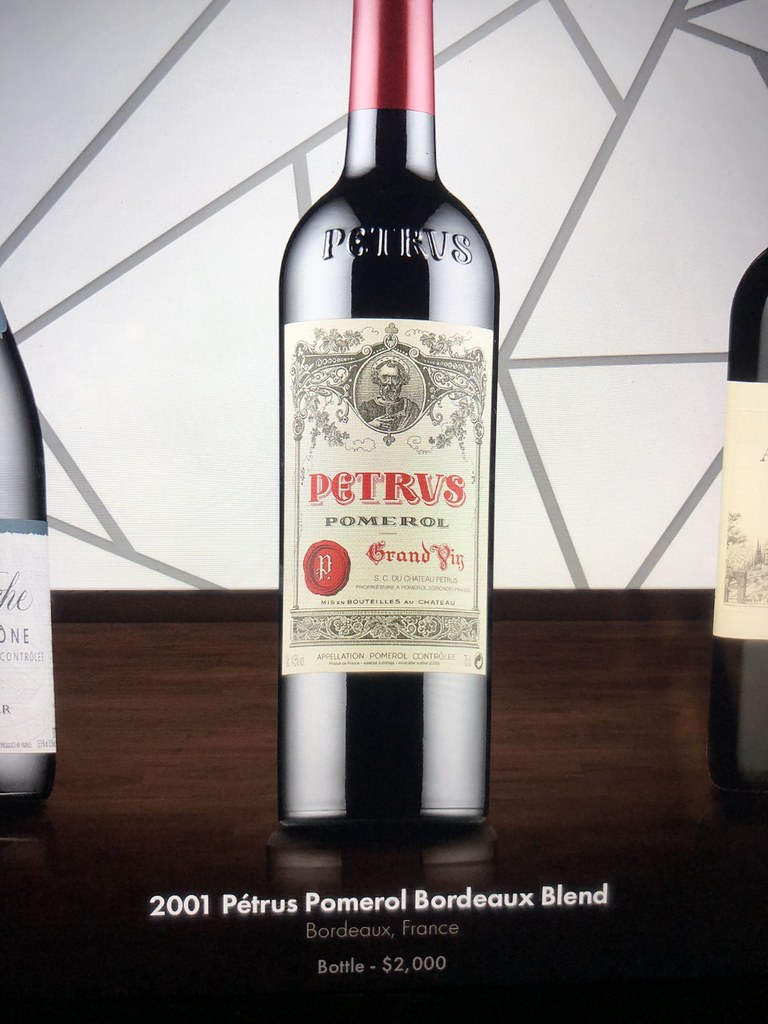 We moved up to the bar for a nightcap, the rum list was wonderful and very well priced. I thought this was a great pick for dinner and drinks.
At our resort The Palms, we had an excellent dinner at the restaurant Parallel 23 on our very first night. I hadn't been expecting much but we were really impressed with the service, the plating, and the food. And sitting outside under the twinkly lights was just gorgeous. So we decided to have our last dinner on the island there as well. 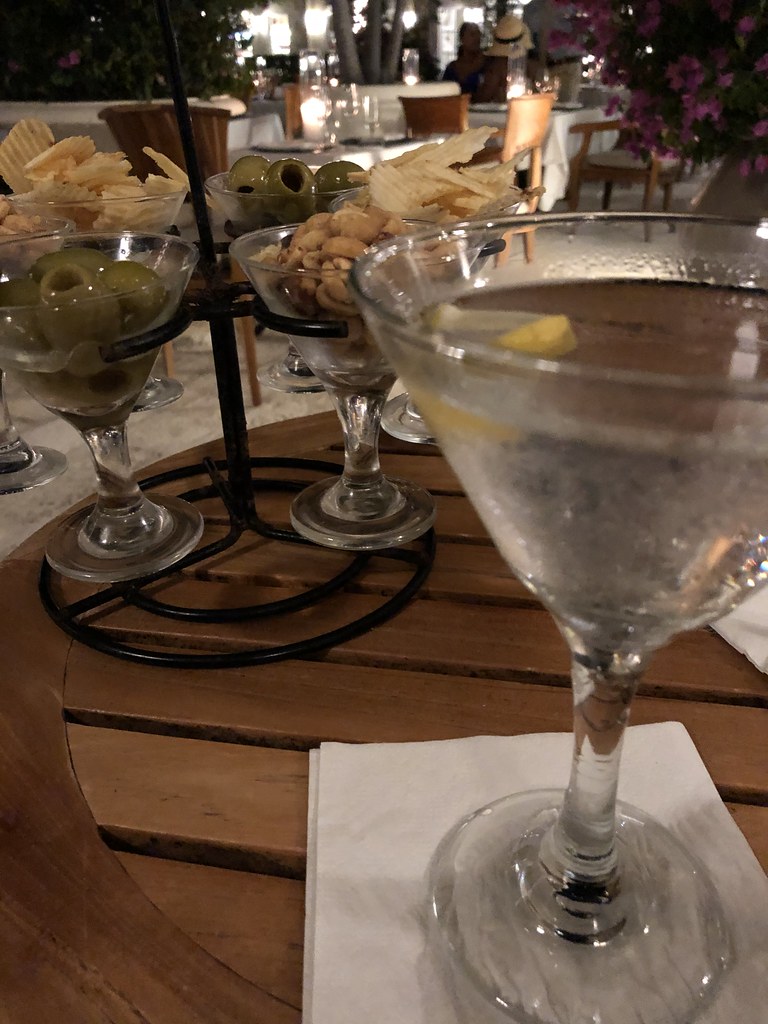 We started with some drinks at the bar, then another lovely dinner outside, and when the bill came we found they had comped us both. That was a very nice end to an already amazing stay at the Palms. 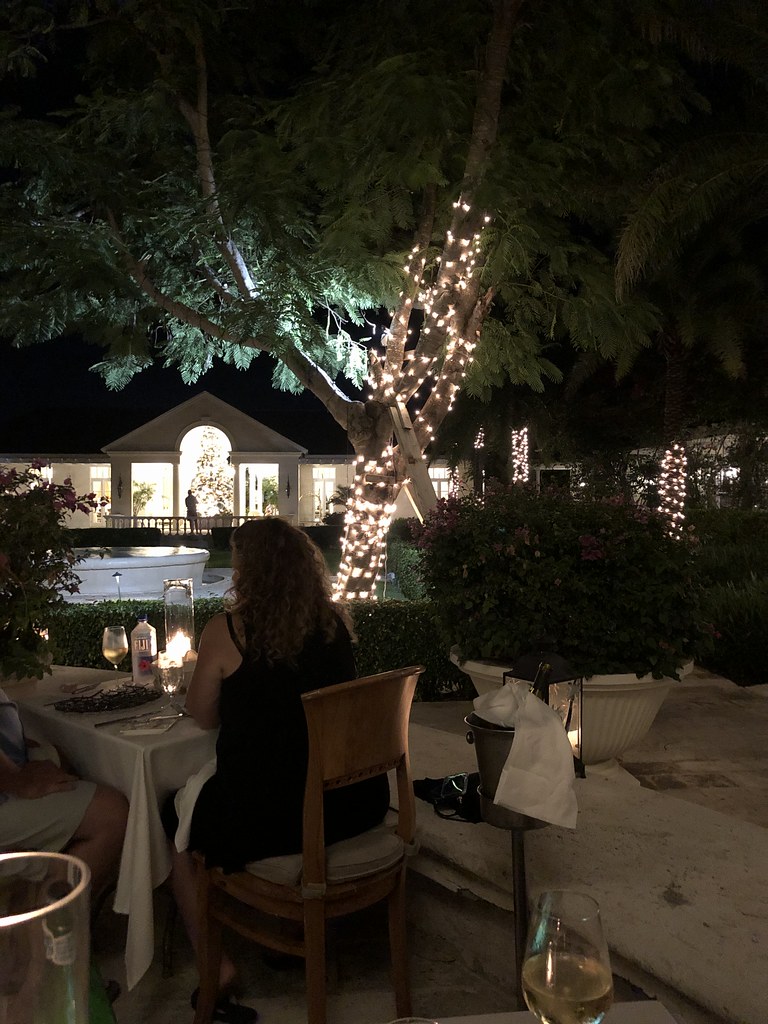 At the airport on the way off the island I enjoyed one last Turks Head beer. It had been a great vacation and I felt the island really lived up to it's gorgeous reputation. We found everyone who lived and worked there to be kind and friendly. I'd go back in a heartbeat! 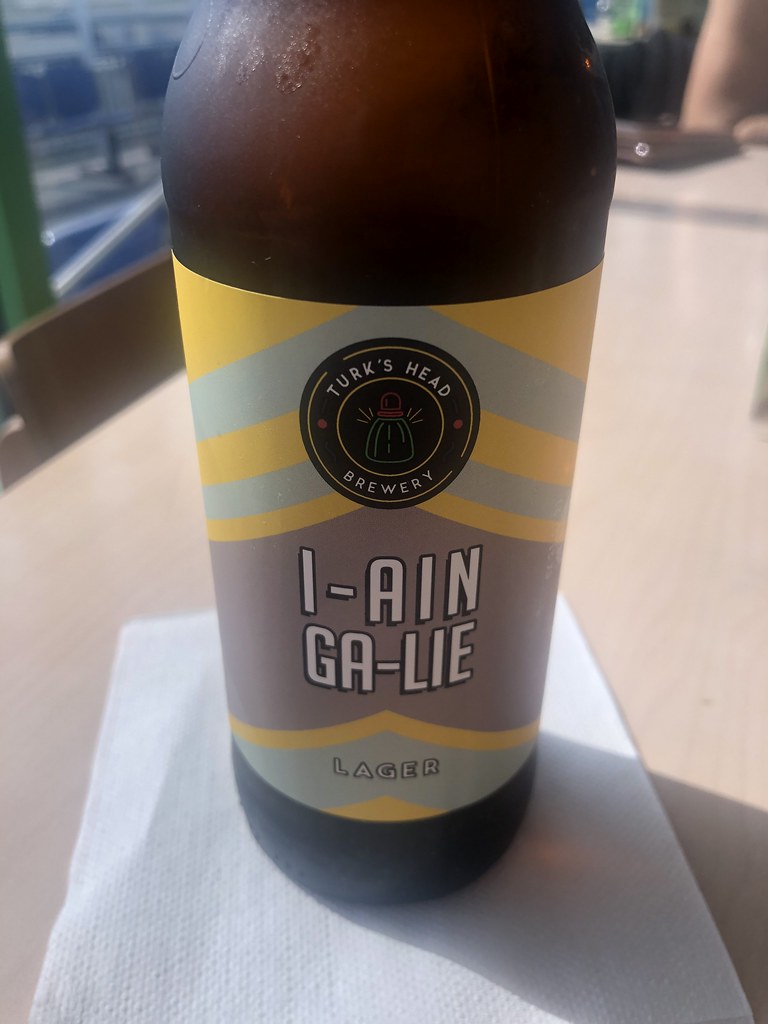 We flew into Miami and had to really hustle to get thru customs and security before dashing for an Uber. We knew we didn't have a ton of time to transfer to Fort Lauderdale so we had done carry-on only. Luckily our Uber driver was up for the challenge and we got to FLL, through security with Clear and PreCheck status in 20 minutes to make our flight home to Seattle!
Part one of Turks & Caicos trip here. All photos here.
at March 06, 2021