Eat Me, Drink Me; Portland

I like to take trains. I like to check out the scene in Portland from time to time. I like my friend Aaron who lives in Los Angeles. So when Aaron suggested we meet in the middle of the west coast for some eating and drinking I started packing my bags! 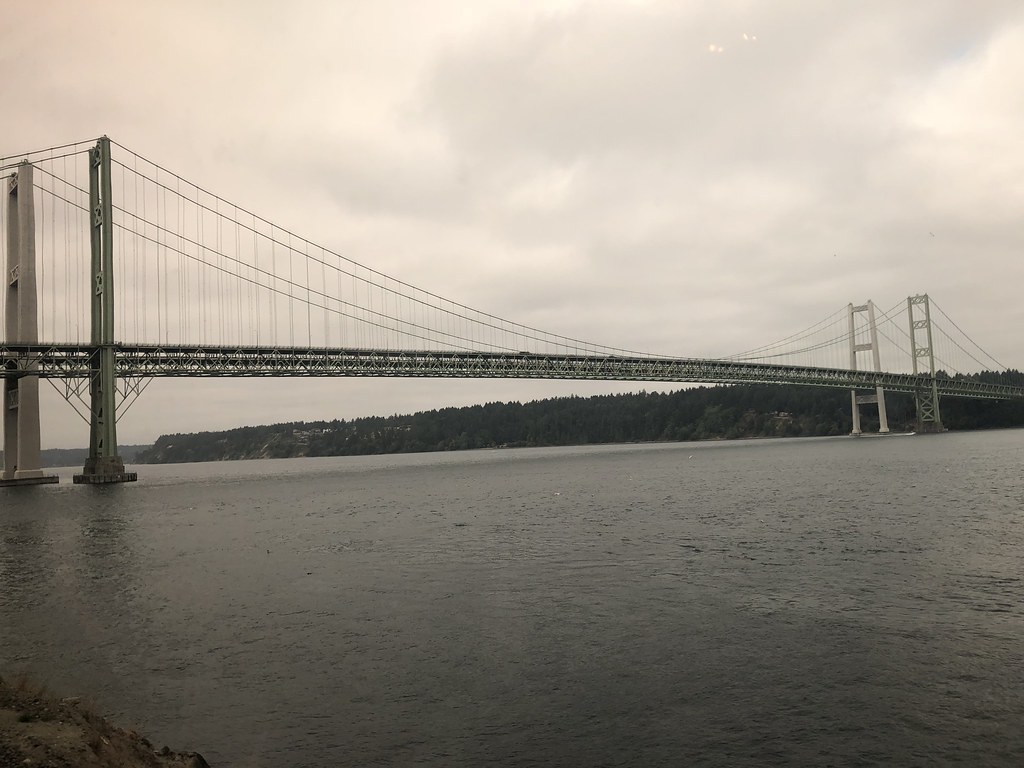 I had a very relaxing, if hazy, ride down to Portland on a Friday morning. The PNW had been socked in with smoke from the summer wildfires and it made for an eerie and slightly wheezy few weeks. As I did a bit of work from the observation car, I was happy to see the skies clearing as we headed south. 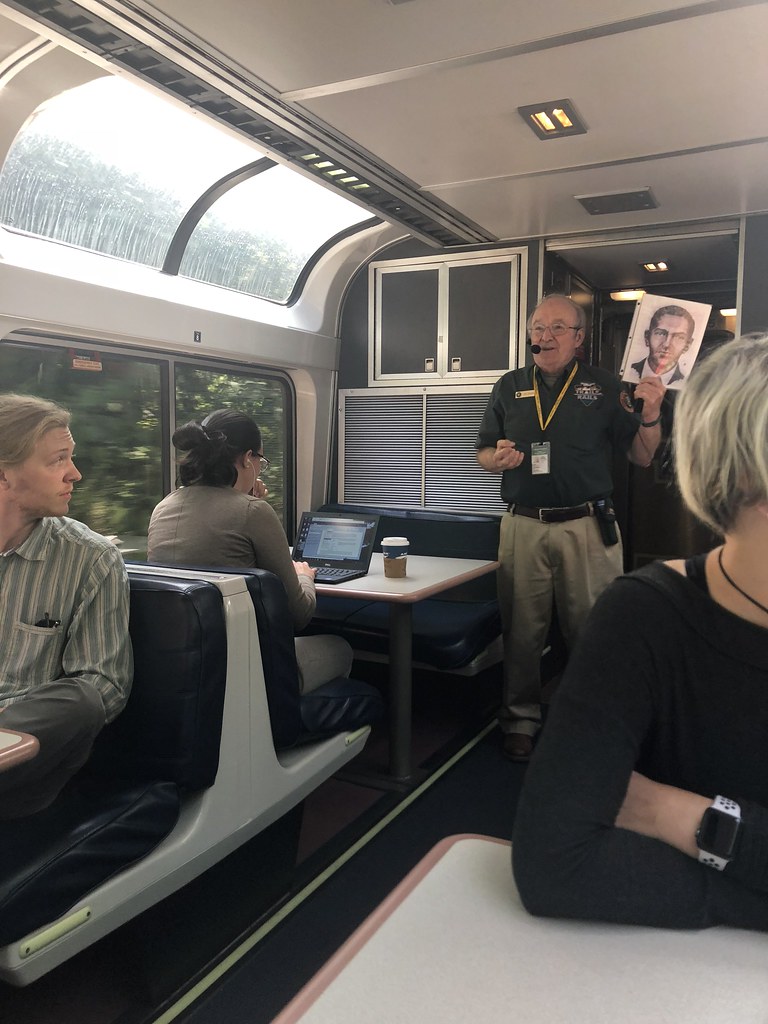 I had been too busy to pack a lunch which was a very bad move. There is nothing at Seattle's King Street Station to buy and the train has some pretty crappy food. Luckily I had a thermos of rosé with me. Breakfast of champions! I love sitting in the observation car on this train, when they have volunteers from the Park Service giving info about the areas we pass through. This day's lecture included the story of DB Cooper. 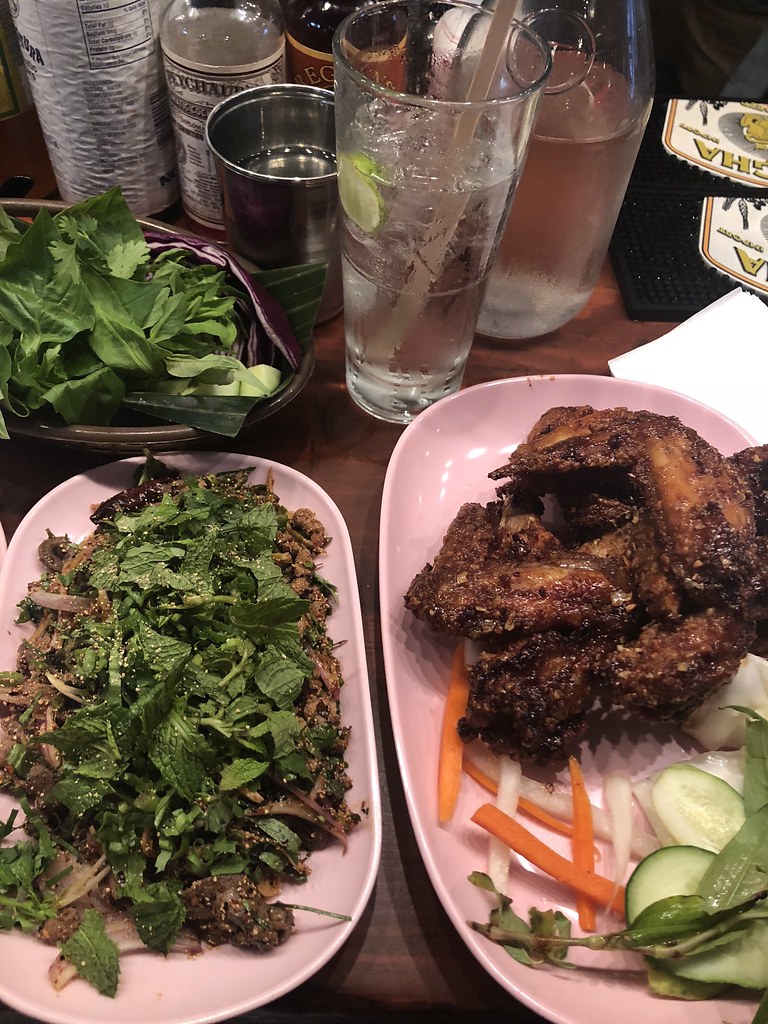 My train arrived a few hours before Aaron's flight so I took an Uber to Pok Pok for lunch. This old favorite never disappoints. The front desk guy nicely stored my suitcase while I enjoyed a makrut lime infused gin and tonic, crazy spicy duck larb, and of course the signature chicken wings. And when my gin and tonic couldn't cut the heat, the bartender expertly sent me a thick mango juice which did the trick.

Our Airbnb was just 3-blocks away and was a cute little 2 bedroom cottage behind a larger house. It wasn't perfect, with the bathroom downstairs and both bedrooms up, but for our short stay it was the perfect location in the Richmond area. 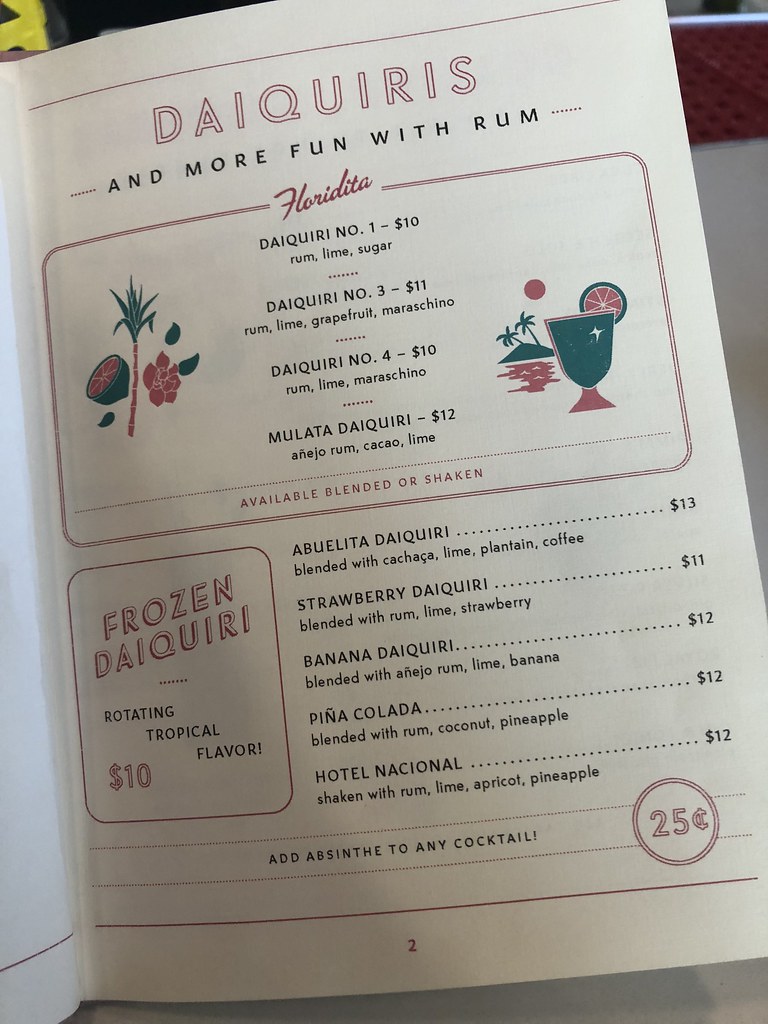 Aaron arrived and we headed to Palomar, opened last year by bartender Ricky Gomez, formerly of the Teardrop Lounge. Ricky has long been one of my favorite bartenders, his drinks were always spot on and he has always been a gracious and interesting host. His new bar is just like that! We only had time for one, but I would love to go for a few rounds next time I'm in town, during lunch when I can try the food too!

Aaron and I were meeting friends of his at Castagna for dinner. We were very excited as Chef Justin Woodward has worked for some of the world's best restaurants and has received so many awards! 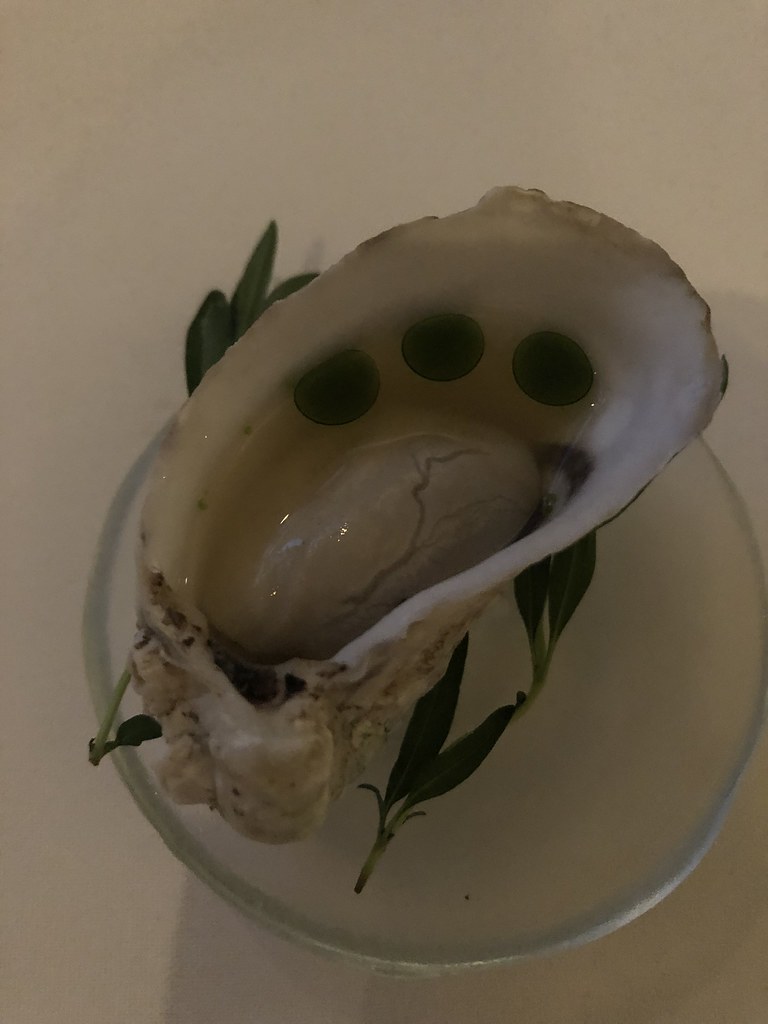 Ultimately, the dinner was fine but a little disappointing considering the expense. My dinner companions didn't like the space, although I did. But the two things that stood out were 1) when I made the reservations, 2 months in advance, I made note that my friend doesn't eat pork or shellfish. Each of the dishes that contained those were just swapped out with vegetarian options for him. Boring. 2) None of the dishes were very memorable save for the crab/cucumber dish and the muffin/foie gras dish. But on a positive note the service and wine pours were great. 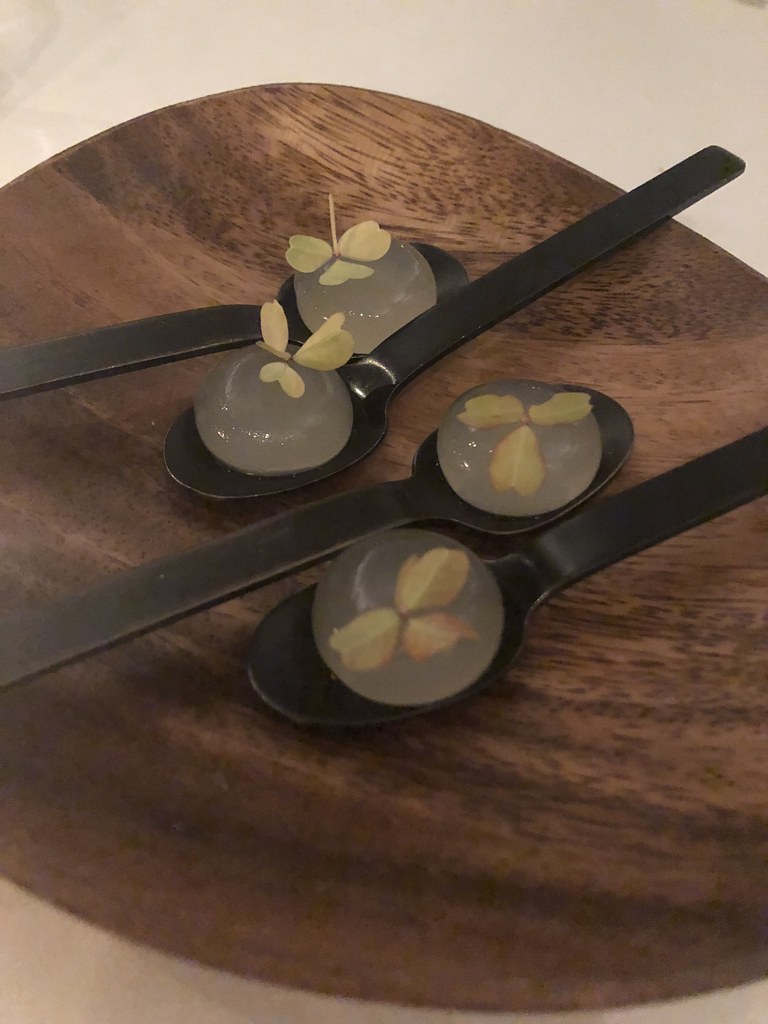 Aaron and I had nightcaps at another new bar, Deadshot. It's heavy on bitter drinks and on this Friday night was very light on customers. Our drinks were good but it was hard to get a vibe on the place.

Saturday morning we headed to another new spot, Canard, for breakfast. From the folks at Le Pigeon, this spot knows how to guild a lily. We had a fantastic brunch of pastrami wrapped veal paté, the most perfectly executed omelet I've ever seen, and what the chef's refer to as "QuackStack"- the most delicious dish of pancakes with duck gravy, Tabasco onions, and a fried duck egg. There is an option to add foie gras. 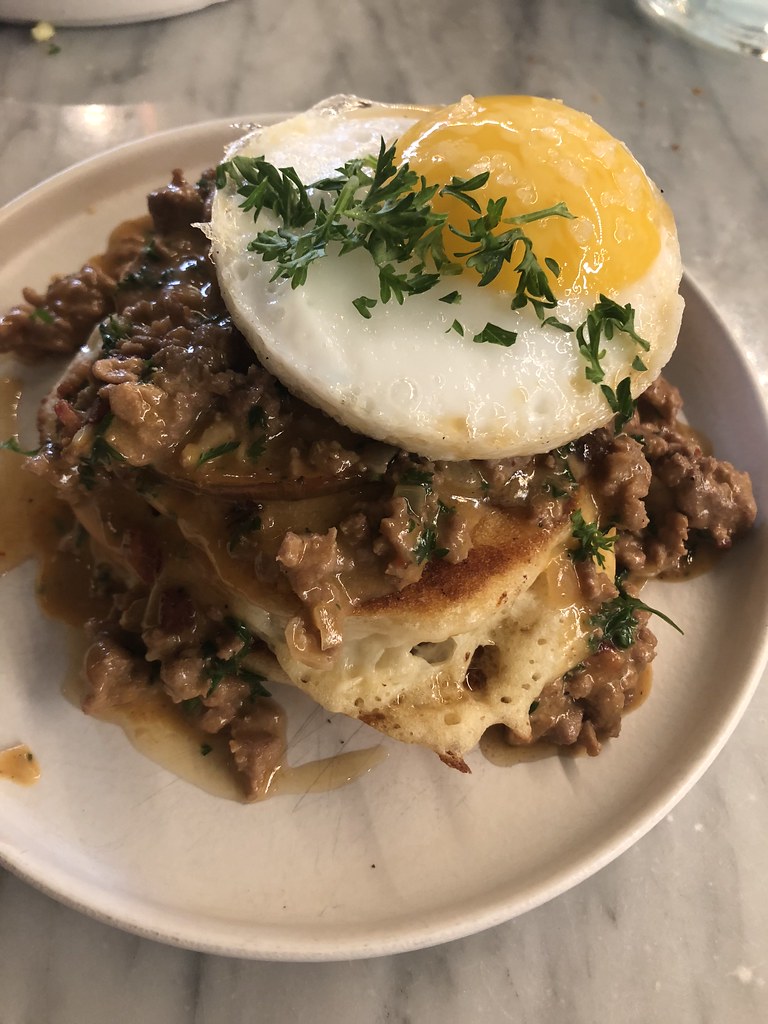 All this was had with some great breakfast cocktails. I highly recommend a meal or three here!

Our afternoon was spent trying to walk all that amazing brunch off. Over the bridge we went to downtown where we stumbled upon Union Barber. Aaron got a buzz and we both were given free glasses of bourbon. So civilized. 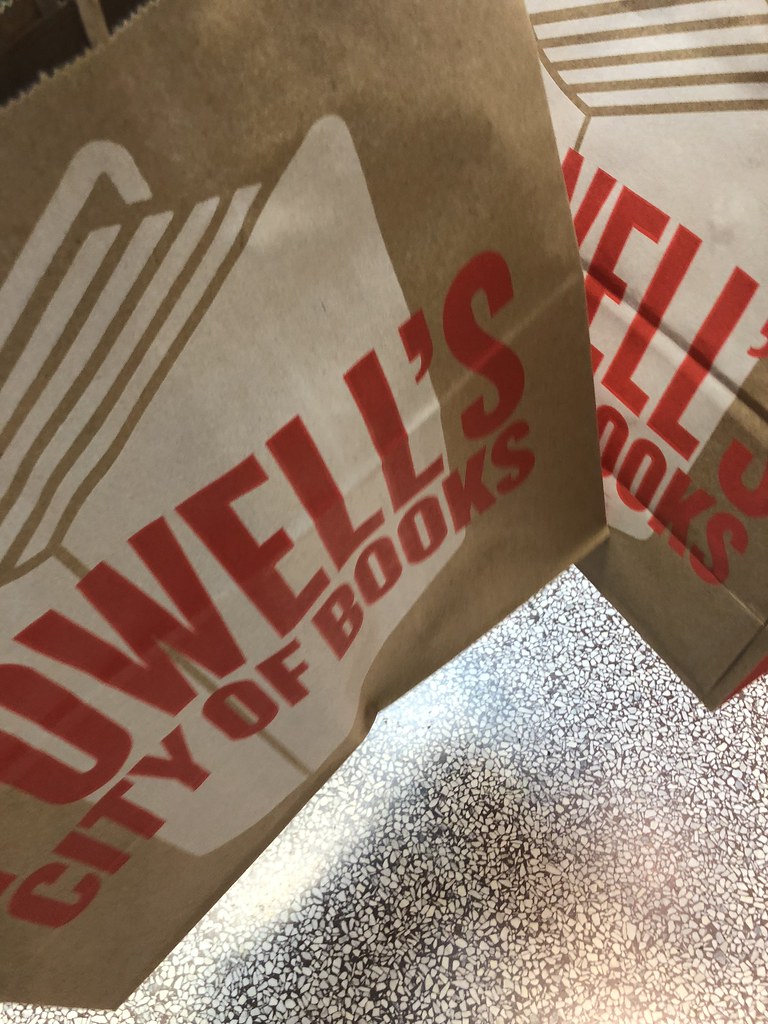 Next up we did a little shopping at Powell's Books before continuing our walk up to Nob Hill. I hadn't been in this area before and it is adorable! Tons of shops, cafes, restaurants, etc. We found a really unique shop called The Meadow which specializes in just salts, bitters, and chocolates. Brilliant! From here we randomly stopped into Southland for their 3pm Happy Hour before finishing our walk at the Aria Distillery so I could buy a new Bull in China mixing vessel. 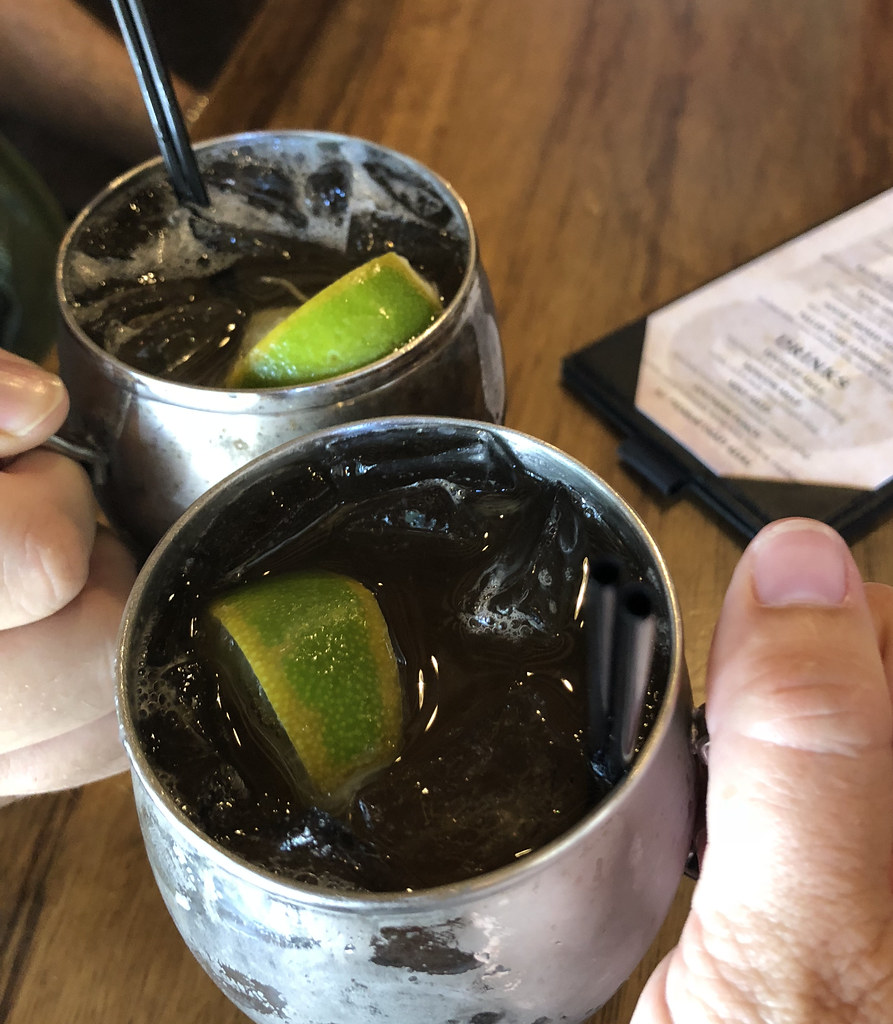 Phew! We were ready for our 1st dinner. Yes, I said 1st. Travelling with Aaron involves a bit of competitive eating, and he had two dinners set for us. I added in two cocktail bars. We travel well together!

We showed up at Nimblefish, which is getting hot press everywhere, right before opening and were seated at the sushi bar. Exceptionally good sushi at very good prices. We both loved it! 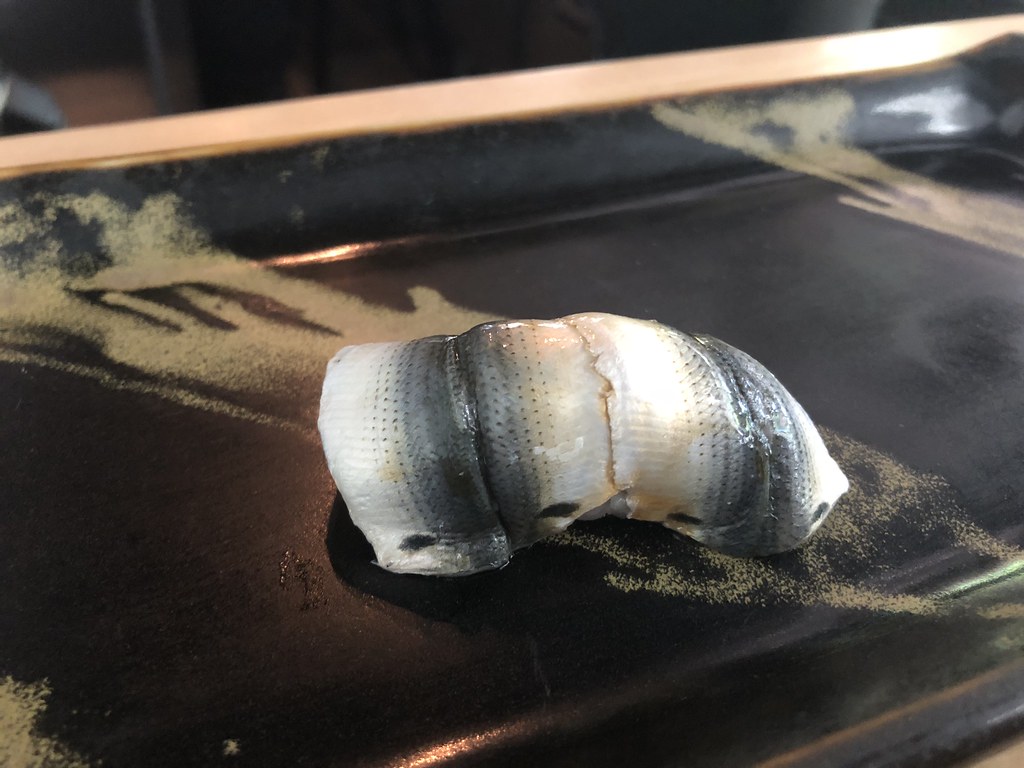 Time for a drink! We headed north to Expatriate which I had heard a lot about and was excited to check out. I won't go into it, but let's just say the bartender was a dick and was talking shit about some Seattle bars even though he knew I knew the folks working there. Bad manners, ok drinks. 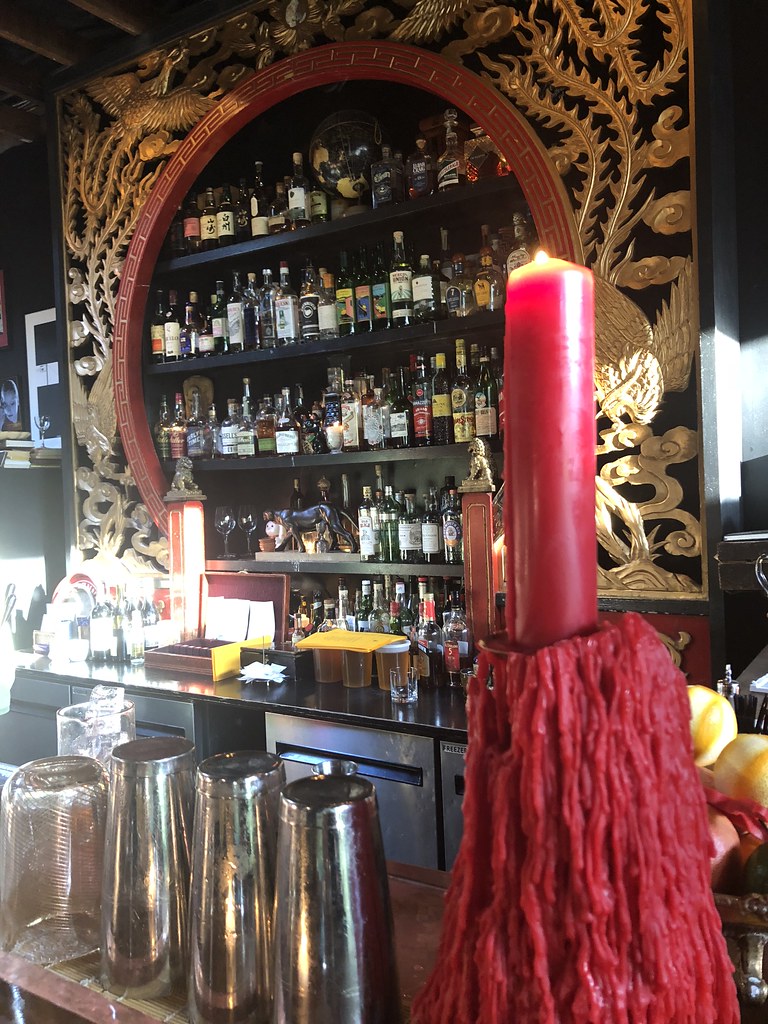 Dinner #2 at Tusk was also fantastic! Everything was delicious and they had a special lamb shank on the menu which was amazing. Also a super fun atmosphere. Highly recommend!

Not to be outdone by Aaron's two dinners, we headed to Angelface for nightcaps. As we had been asking various bartenders for recommendations on where to go during the weekend, this one seemed to generate love or hate responses. But we both loved it! 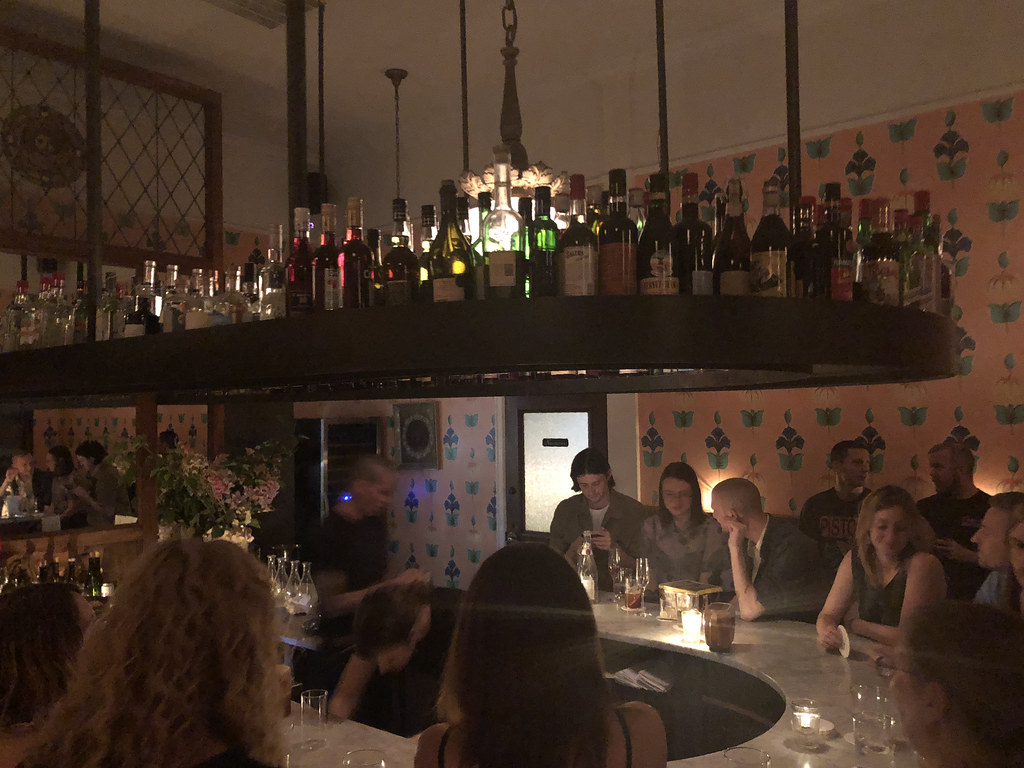 It's a tiny space, with a lovely horseshoe bar. There are no menus, you just tell them what you want or what type of spirits you like. I honestly can't remember what they made me as it had been a long day but we had great service and our drinks were delicious. Another recommendation for you!

The next morning, while Aaron headed to his friend's house for brunch, I went to the newly reopened Kachka. This Russian restaurant has become the darling of Portland in recent years, so they expanded the restaurant to a new location and turned the old one into a more casual eatery. 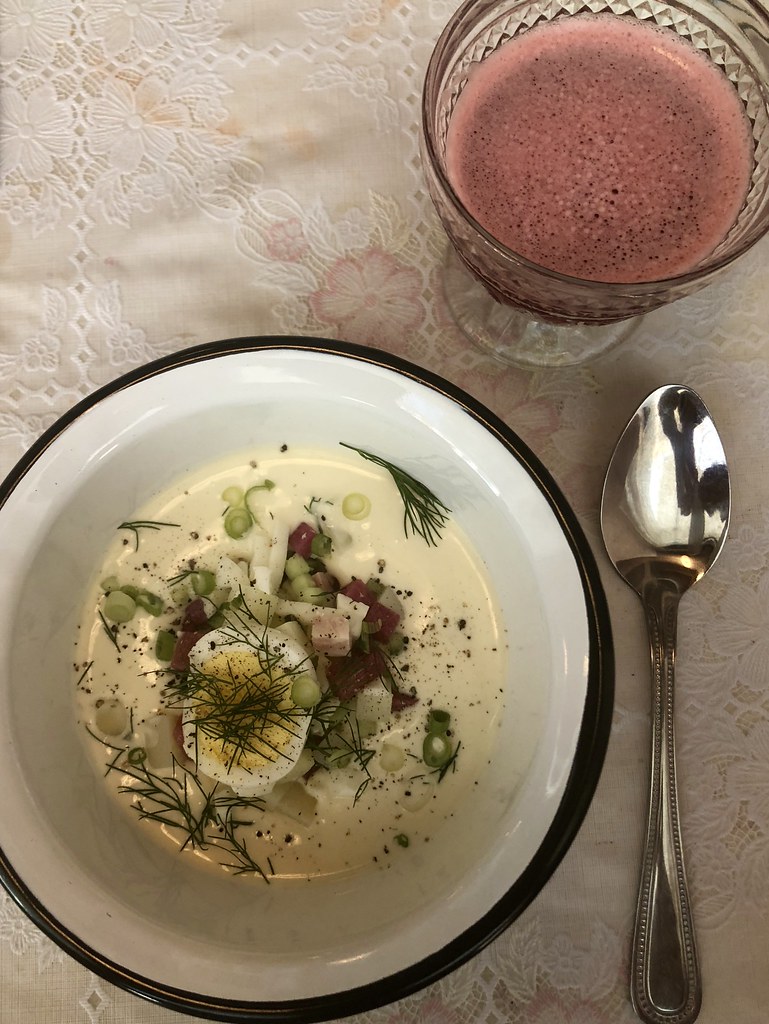 I get the hype! I had such a delicious lunch here. Interesting cocktails, wonderful food with traditional roots without being afraid to improve. Like my pelmeni sauteed in brown butter and topped with sour cream (instead of being boiled traditionally) or the pickle juice shots. Get there!

I met Aaron at Clyde Common, which is always on my to-go list and serves cocktails on Sunday afternoons. Mutual friend and aquavit slinger Jacob joined and we had a good catch up. And then it was time to say goodbye. 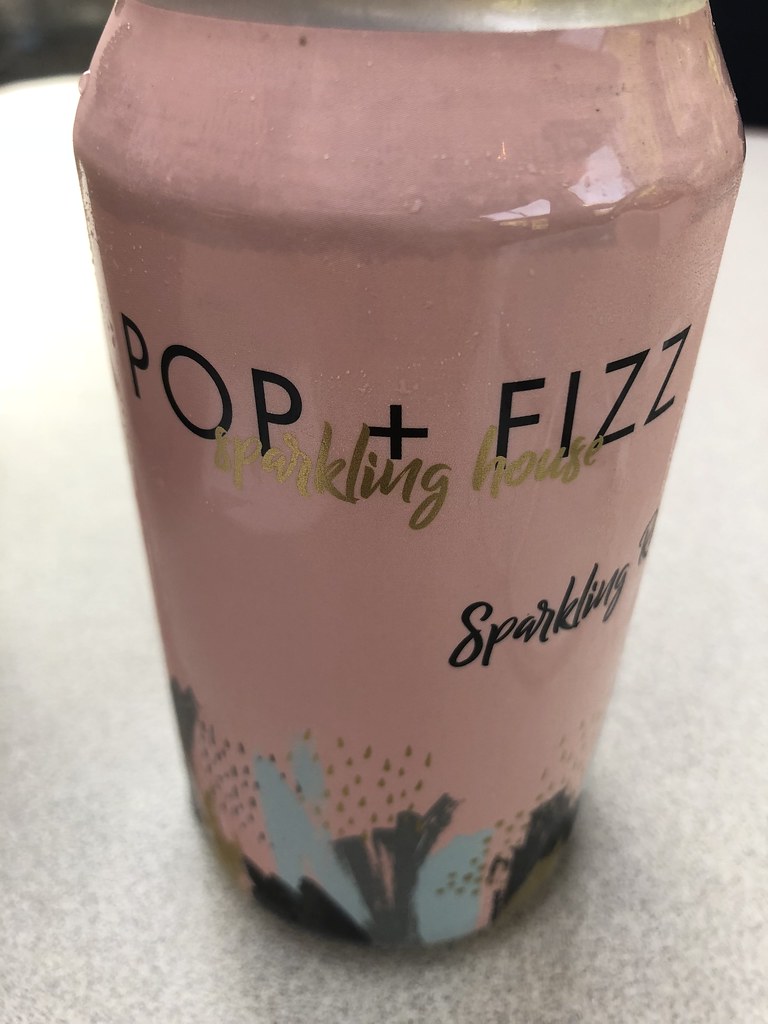 This time I had my Uber make a quick stop for a salad and some canned rosé for my train ride home.
As Amtrak made its way north, we re-entered the wildfire smoke. The sunset that night was an ominous orange because of it. 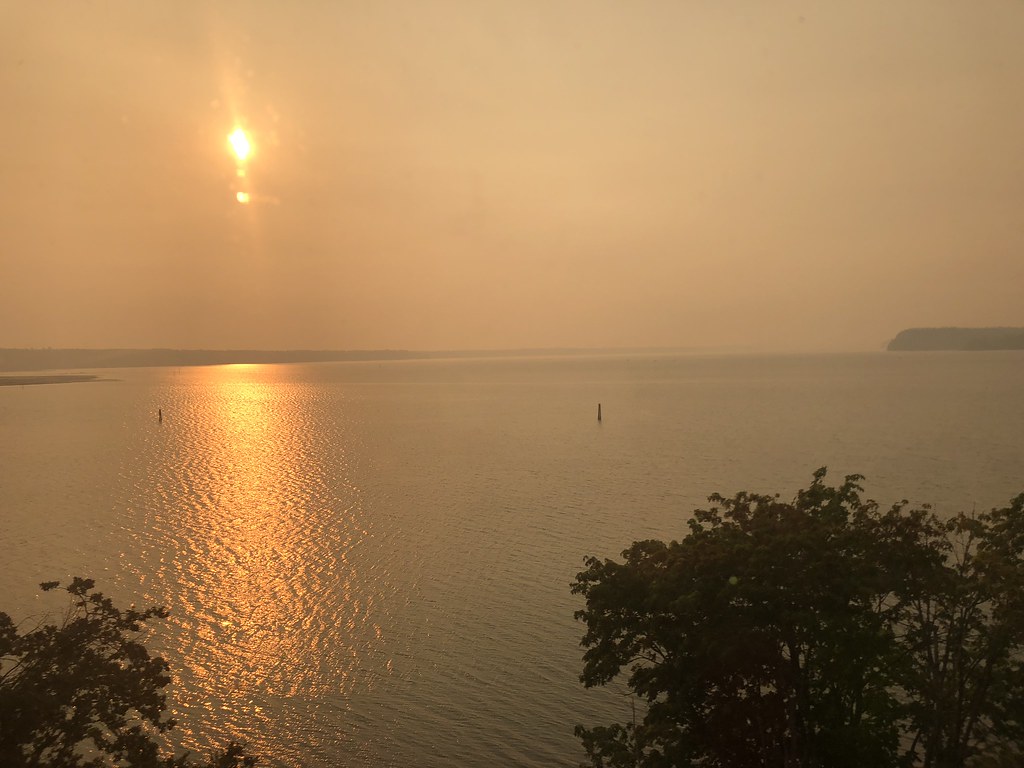 It was a quick trip to hang out with my friend but it's always good to get down to Portland. And we have a longer trip up our sleeves...and I ate salad for a week after!

All photos from Portland here.