It's a story on repeat, each winter I look to get some pool and sun time in Palm Springs. This year my friend Gail and I rented a really cute little house in the Racquet Club Estates area from Vacation Palm Springs. They even gave me a repeat customer discount since a group I use to go down with had rented from them repeatedly. 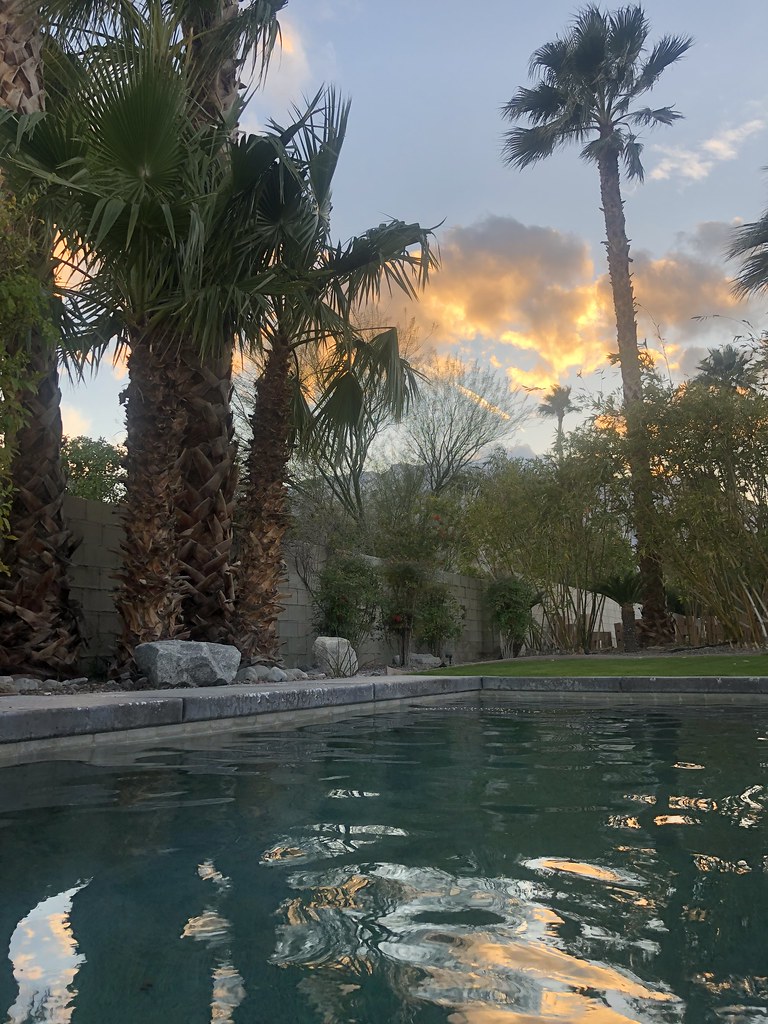 We used a companion fare discount on Alaska Air and were upgraded to Premium. Gotta love a couple free mimosa's on the flight down. We picked up our rental car from Hertz where there was zero line. Everyone was in the Avis/Dollar line and it was crazy long! Note to self.

First stop was lunch at Wexler's Deli at the Arrive Hotel. OMG. Sooooo good. The potato salad is amazing! And my sandwich was big enough that I had the other 1/2 the next day! 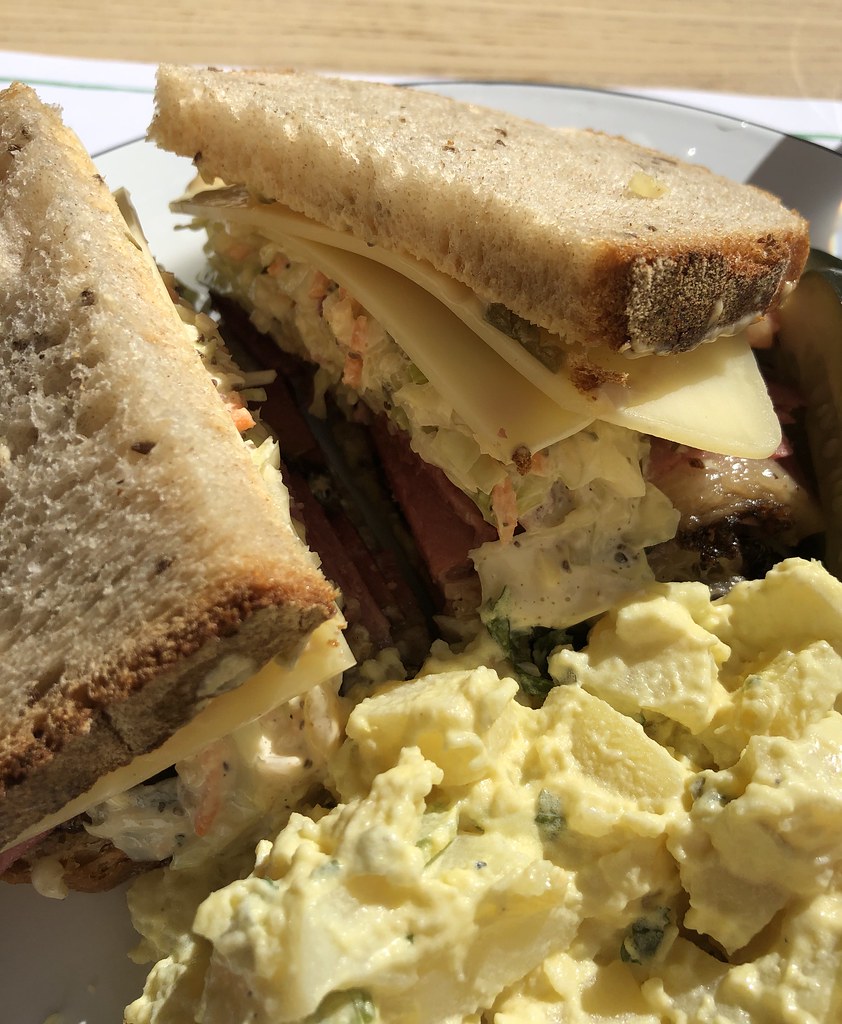 On to grocery and wine shopping. We used my membership at World Market and saved $80 on our wine! And that included 3 magnums of rosé! Free to sign up and we noticed that they were carrying some good stuff now!

That evening we had a great time at Counter Reformation at The Parker. This cool speakeasy is focused on pouring wine from around the world. And the small bites like caviar and quail egg in a toast round, were delicious! The tin ceiling is low, the room is dimly lit, and the place was packed. Good thing I had made reservations!

On the way out we stopped for a nightcap at the super cute and super tiny Mini Bar located in the lobby. It's adorable but my martini was shaken within an inch of its life and they were using pretty subpar gin. 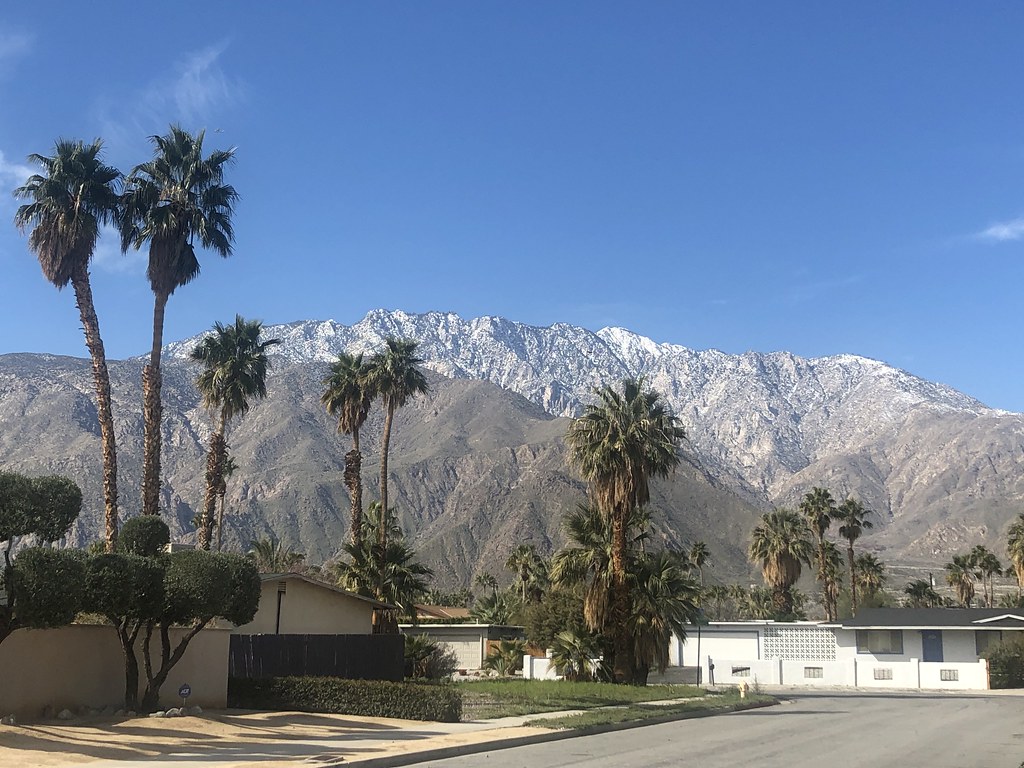 Gail is just like me in that she loves to go for a morning walk, so we headed out the next day to explore our neighborhood. I've seen this mountain range so many times over the years, but this was the first time I saw so much snow on it!

We stopped in a few open houses, checked out the cute homes of Racquet Club Estates, and I even saw my first roadrunner!

Back home we opened some rosé and hit the sun loungers and pool. Gail's friend Robin drove up from San Diego and we had a great afternoon. That night we made a huge tray of nachos and watched the Oscars. Our house had a cute outdoor living room with a fireplace so we moved out there when the awards were over. 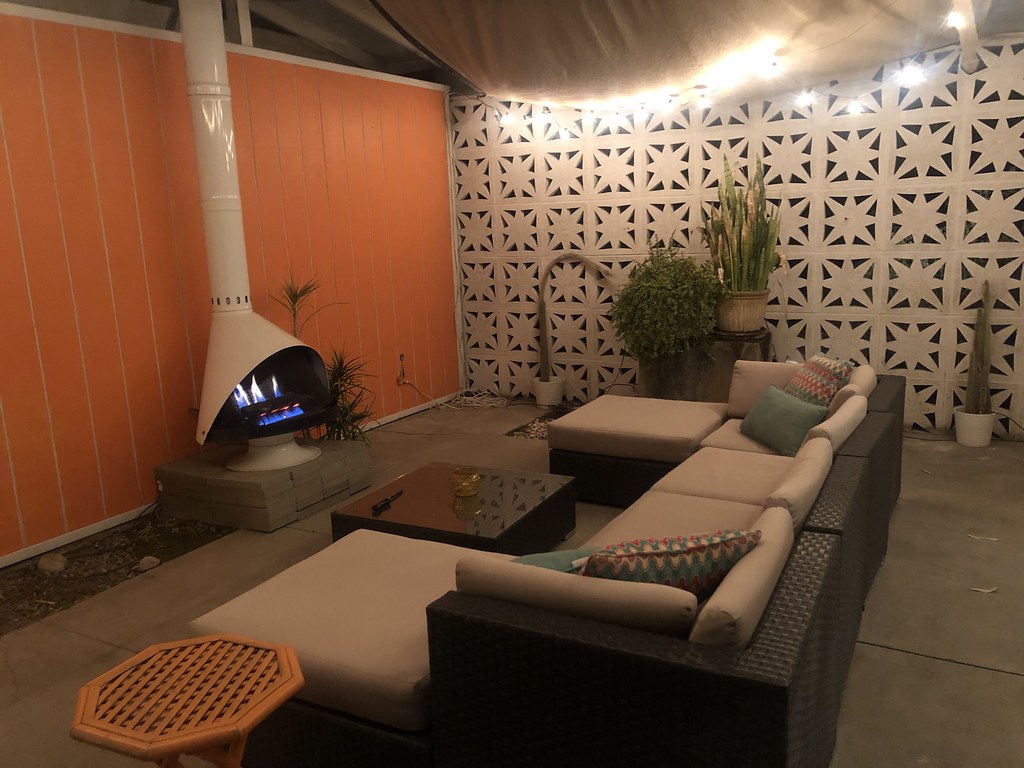 The next day was Monday and a work day for both Gail and me. Unfortunately I realized as I went to set up my laptop that I had forgotten my charger! So a pleasant drive to the Apple store in Palm Desert, and $80 later, I was back in action. I did notice how cute the El Paseo shopping street was, so I've added that to my list of things to check out. And I stopped at In-N-Out burger for lunch which is always a win for me! 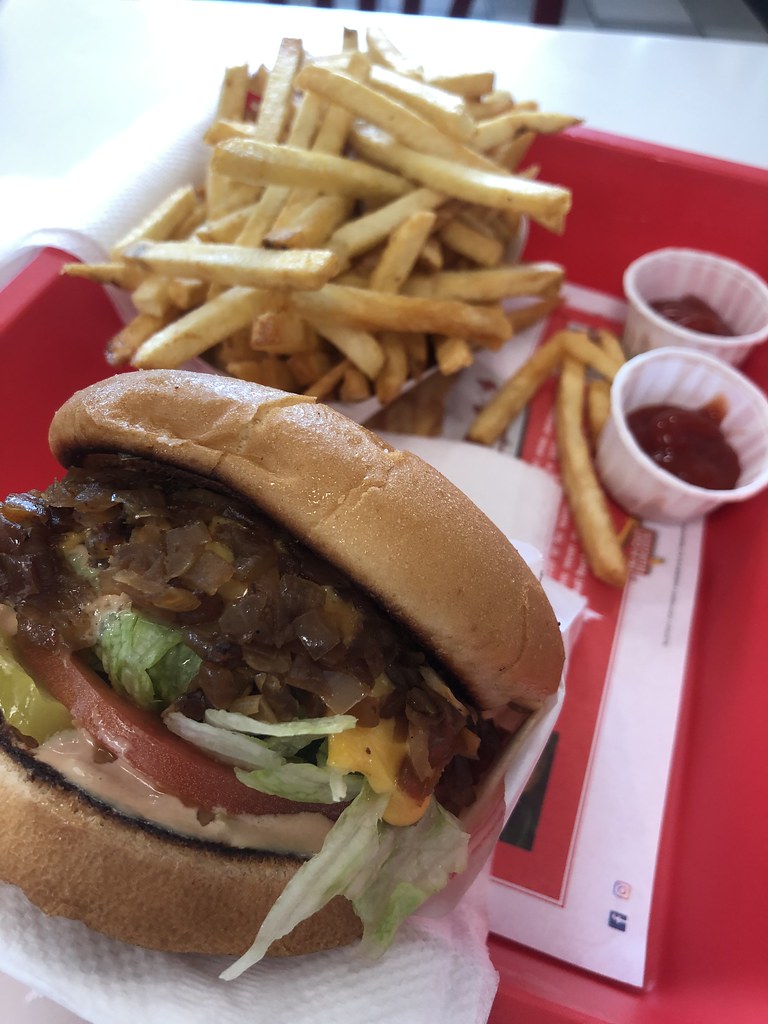 Finally, back home it was time to get some work done before my friend Aaron drove up for the night from Los Angeles!

The 3 of us went to the newly opened Del Rey bar at the Villa Palm Springs Hotel for drinks and dinner. The hotel and the bar are super cool. Dinner and drinks were just ok. But I'd go again for the vibe (and would order something basic). 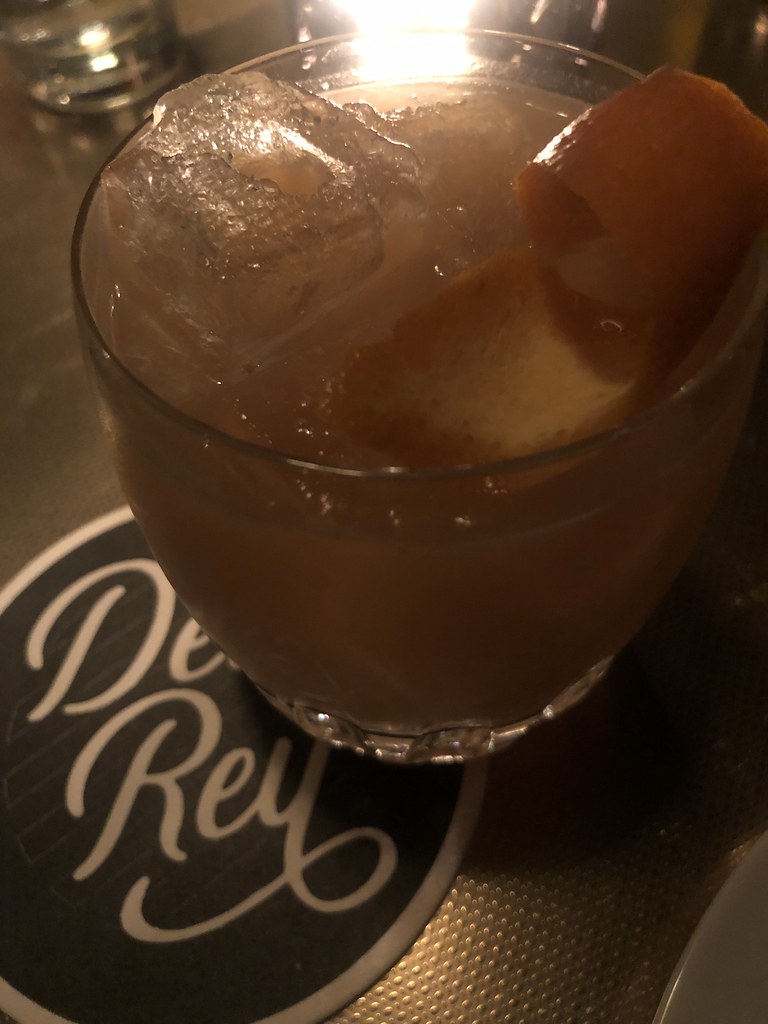 We dropped a sleepy Gail off at home and headed to another new spot, Paul Bar. I had passed the strip mall this place is located in earlier in the day and thought it looked sketchy. Then Aaron mentioned there was a bar and he'd like to check it out! Well the parking lot is a bit sketch but the bar inside is lovely! As were the drinks. I'm definitely going here again! 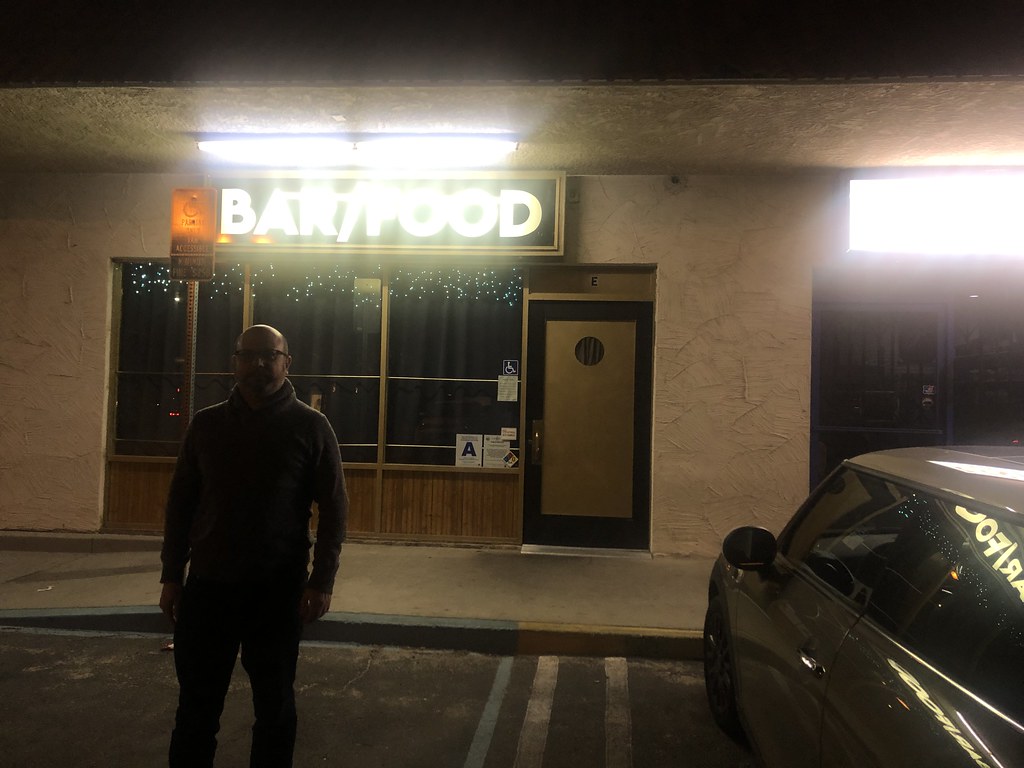 The next morning Gail, Aaron, and I headed out to check out one of the exhibits for Desert X. The huge fluorescent box by Sterling Ruby was startling sitting in the middle of the beige-toned desert. And the color felt like it was soaking right into us. Very cool! 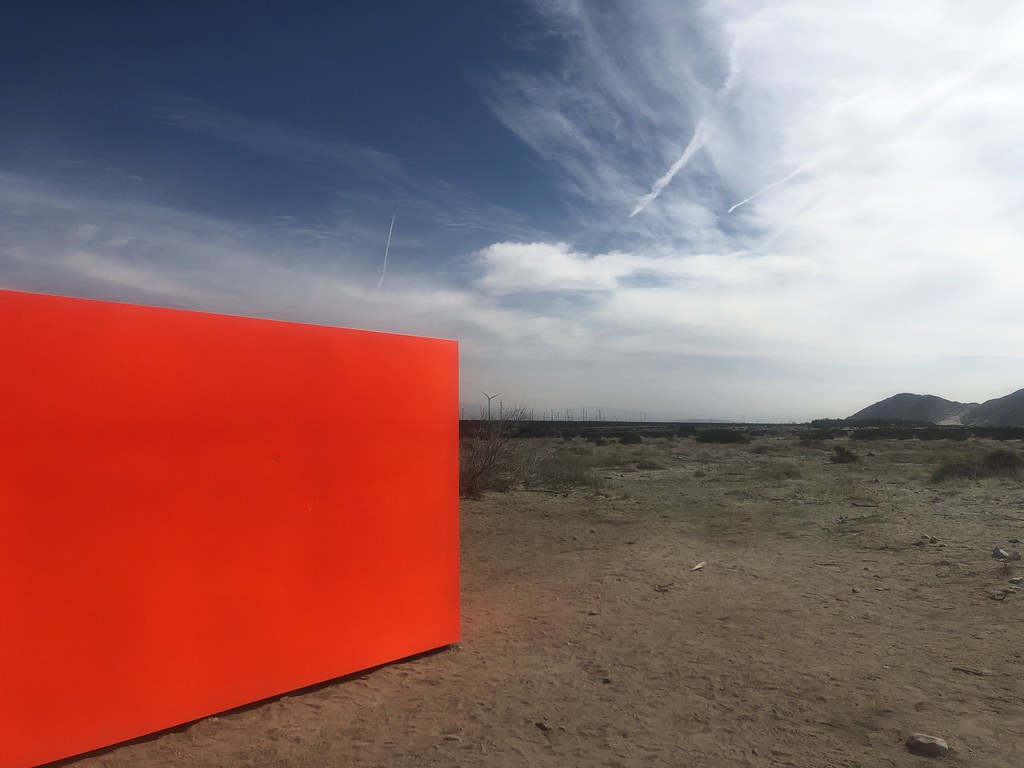 We then continued on to Joshua Tree. I was super excited as I had never been and this was my 7th time down to the area! We entered through the main entrance in Twentynine Palms and drove through the cool and eerie landscape. 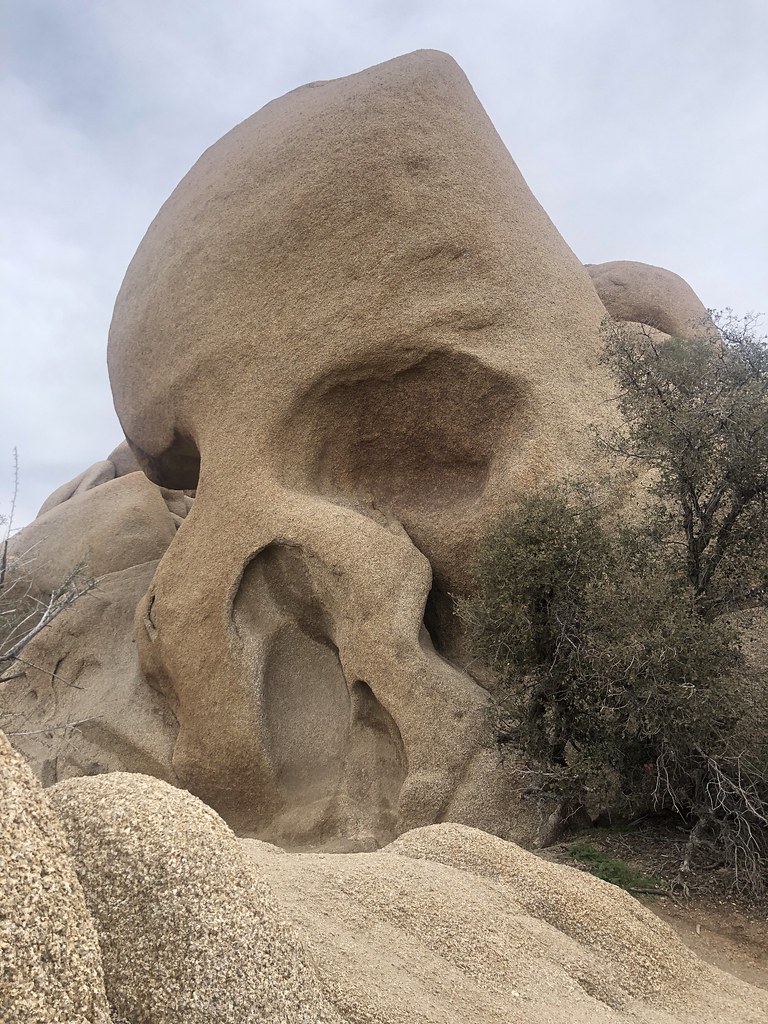 We were headed to the Barker Dam Trail for a short hike, but made a few stops to scramble around on the boulders, including Skull Rock. 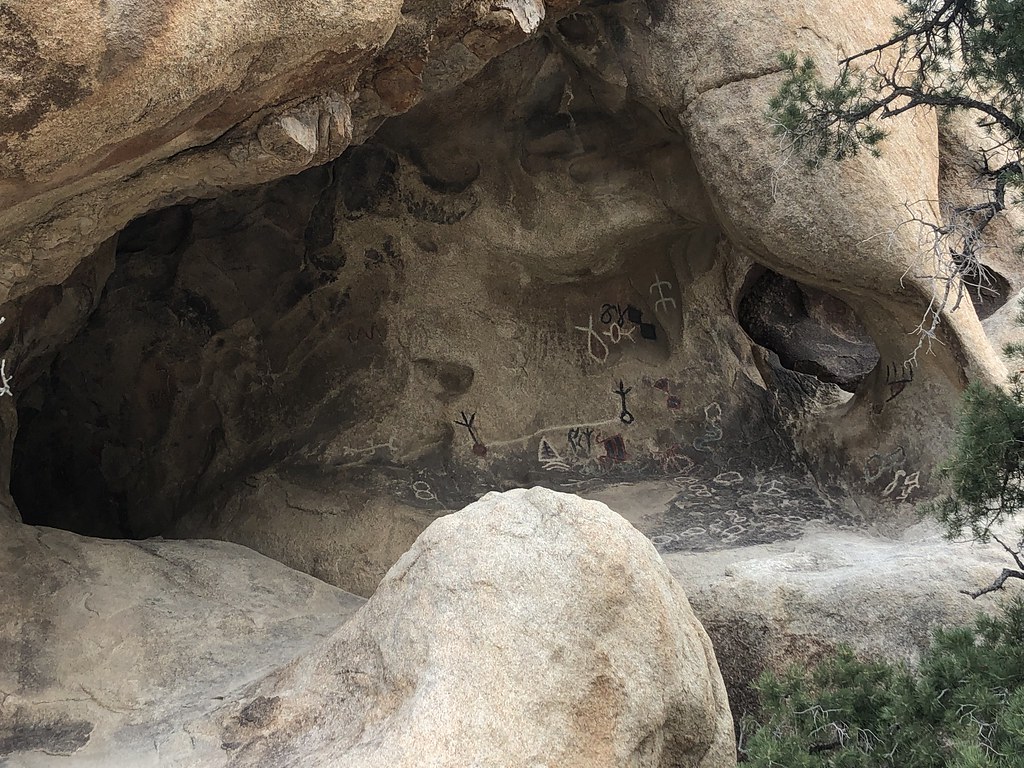 The hike on the Barker loop is mainly flat and quite easy. We checked out the petroglyphs, read some of the markers which describe the resident plants, and made our way to the dam. Pictures really don't do this area justice. It was stunning! 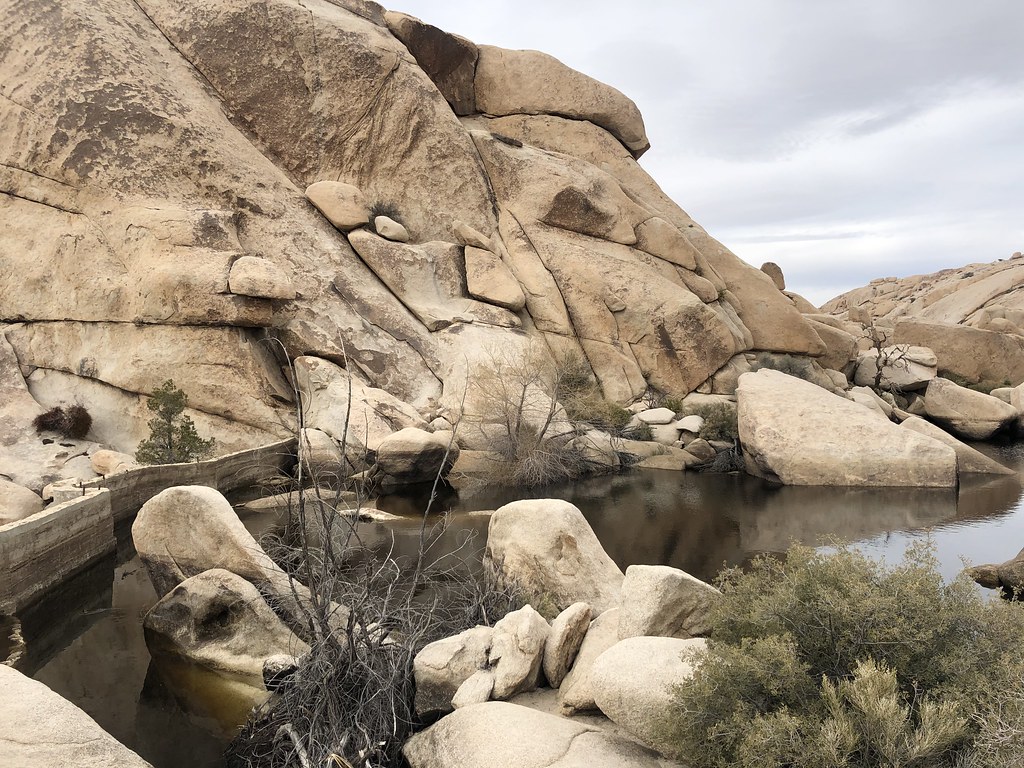 We stopped at Wexler's Deli again on the way home, because it is just that good!

Aaron headed back to LA that night while Gail and I checked out the new restaurant 4 Saints in the Kimpton. It's an absolutely beautiful resto and bar on the rooftop of the new hotel (which also looks beautiful). Our food was all great but it was also expensive AF. Bread will set you back $10!

The next morning we went for a walk around Deepwell Estates where we went into another open house, saw another road runner, and went past the house that William Holden use to own. Do you know that Holden died from falling on a side table while drunk and cracking his head open? Gail does! 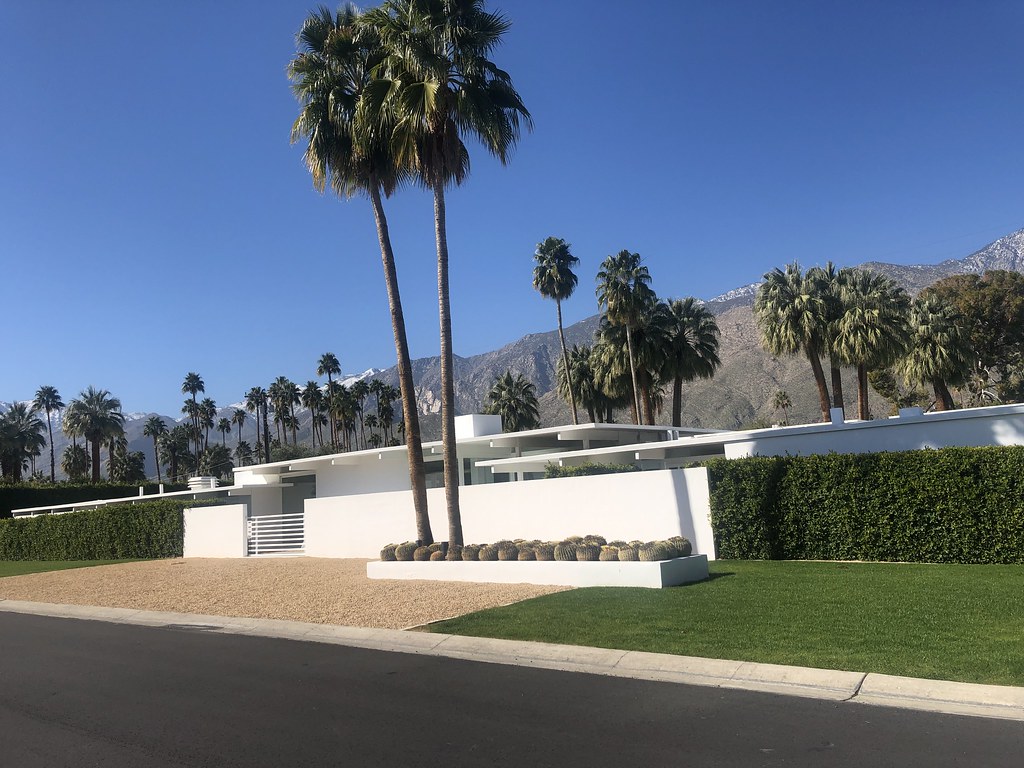 The rest of the day was spent working, swimming, drinking rosé, and hanging in the hot tub. Glorious!

Our friend Nathan happened to arrive in town for a job interview so the 3 of us had an early dinner at Birba. The entire restaurant is pretty much outside and the pizzas were delicious! Another place I can't wait to go back to! 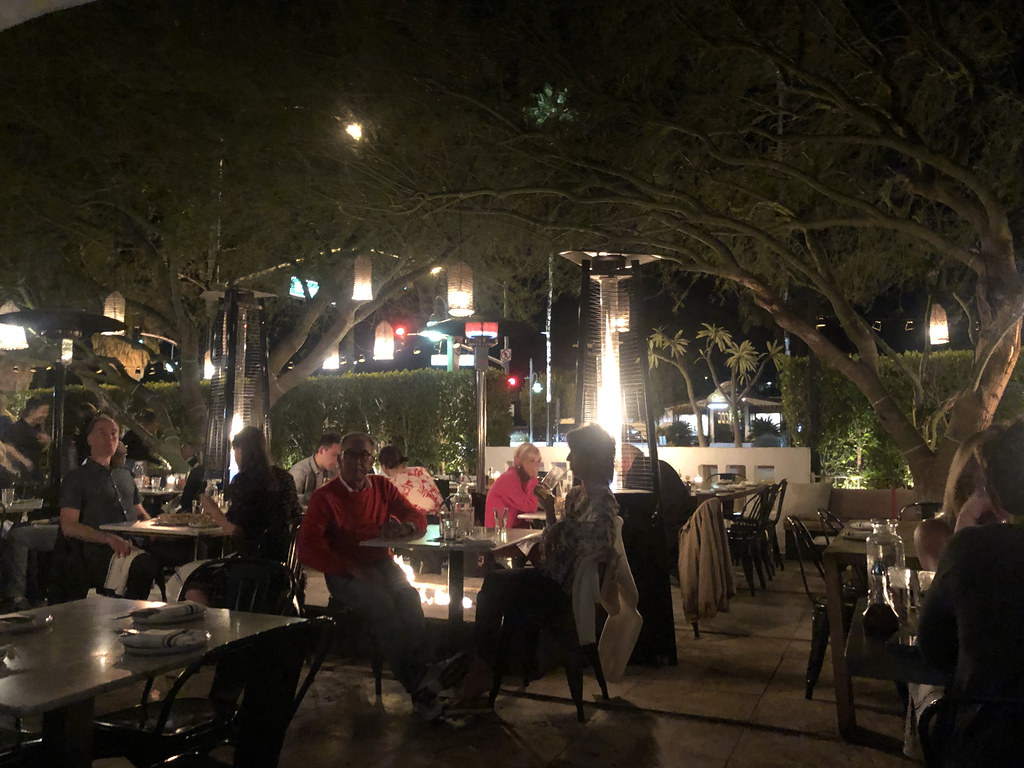 The next morning's walk was thru the Vista Las Palmas neighborhood. So many cool old houses which once belonged to the likes of Marilyn Monroe, Elvis Presley, Katherine Hepburn, and Spencer Tracey. That is one hell of a block party! 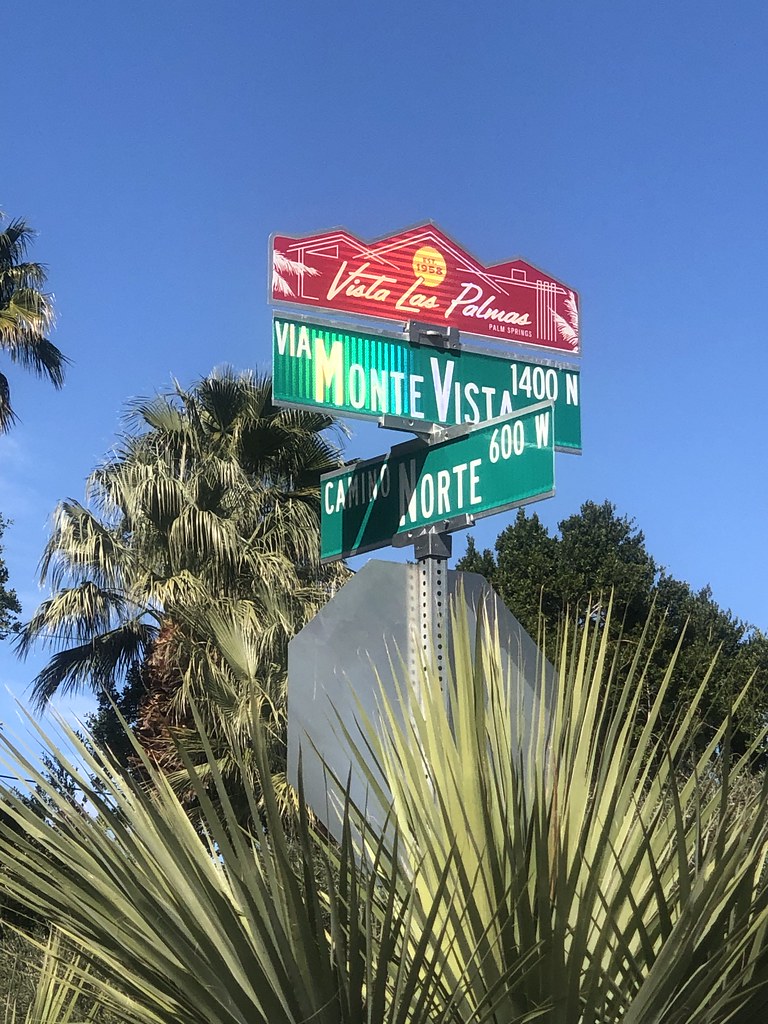 Nathan came over after his interviews and we tried to go to Rooster & the Pig for dinner but the wait was crazy. Next time. Nathan took us to his favorite place, The Tropicale. It's kitschy, festive, and very gay. Super fun! Food was fine.

Our last morning we worked and packed before heading to the offices of Vacation Palm Springs. Although we really liked our house, they had not turned our pool heat on for the first 2 days and had not returned any of my calls or emails requesting to be refunded for that. When I showed up at the office and spoke to the manager he apologized profusely and refunded us $600 for our troubles! $$$ 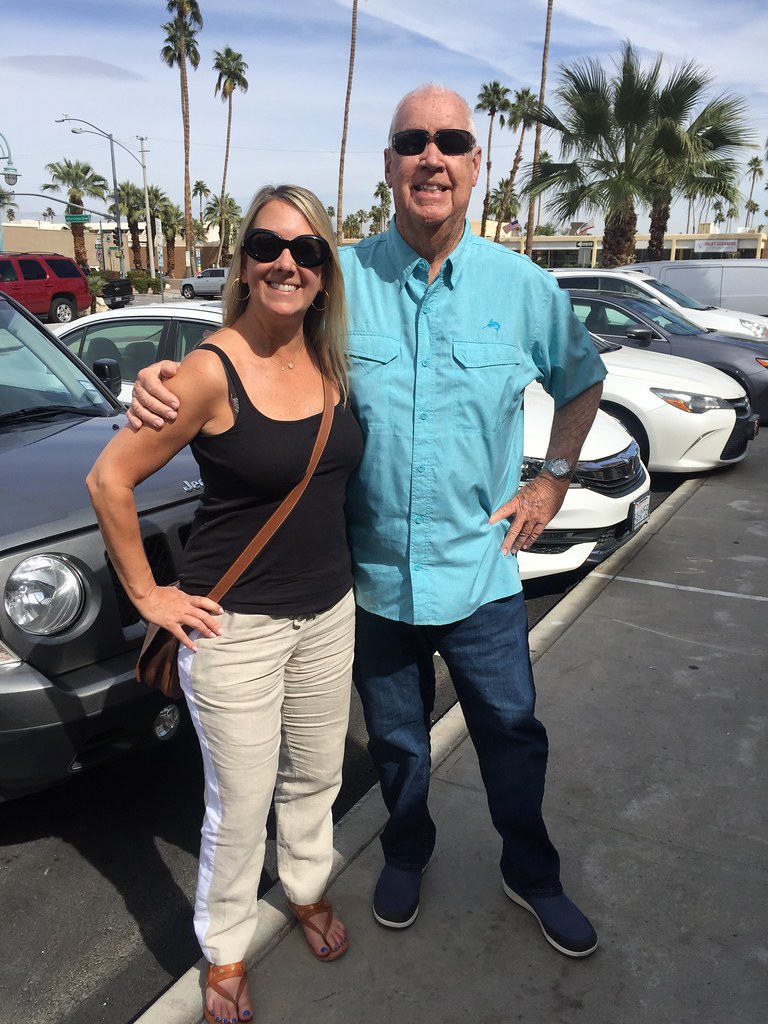 My uncle John drove up from the LA area to have lunch with Gail and I at Fisherman's Market.  That was super nice, and our fish tacos were great!

Gail and I sent him off with a ton of groceries from our house. We tend to over shop!

One last walk, this time thru the Twin Palms neighborhood where we saw this incredible cloud formation! 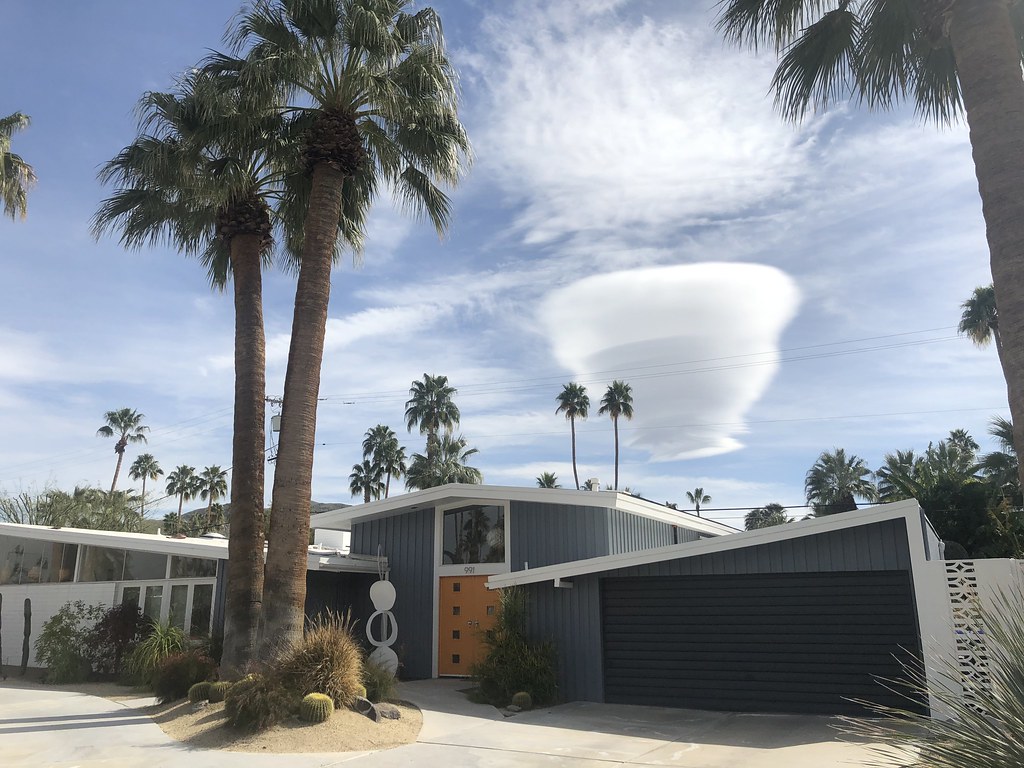 We were upgraded to First Class on Alaska on our way home which was just the cherry on top of this great week in the desert!


All photos from Palm Springs here.