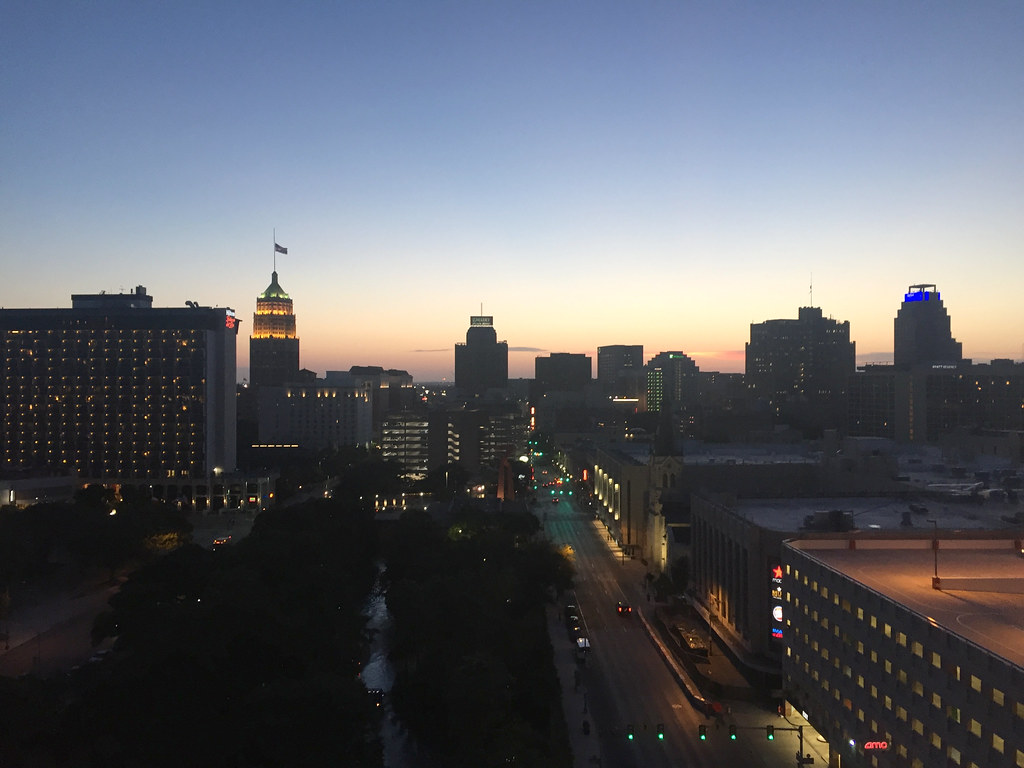 Driving south from Mineola and Tyler Texas, where we had BBQ earlier in the day, we arrived in Taylor Texas after about 3 ½ hours. Again, consulting the Texas Monthly Best BBQ articles I chose Louie Mueller’s for an early dinner. We ordered brisket and sides and were told they didn’t sell beer although we could BYOB. Forest went to the nearest convenience store for brews and I grabbed a table. 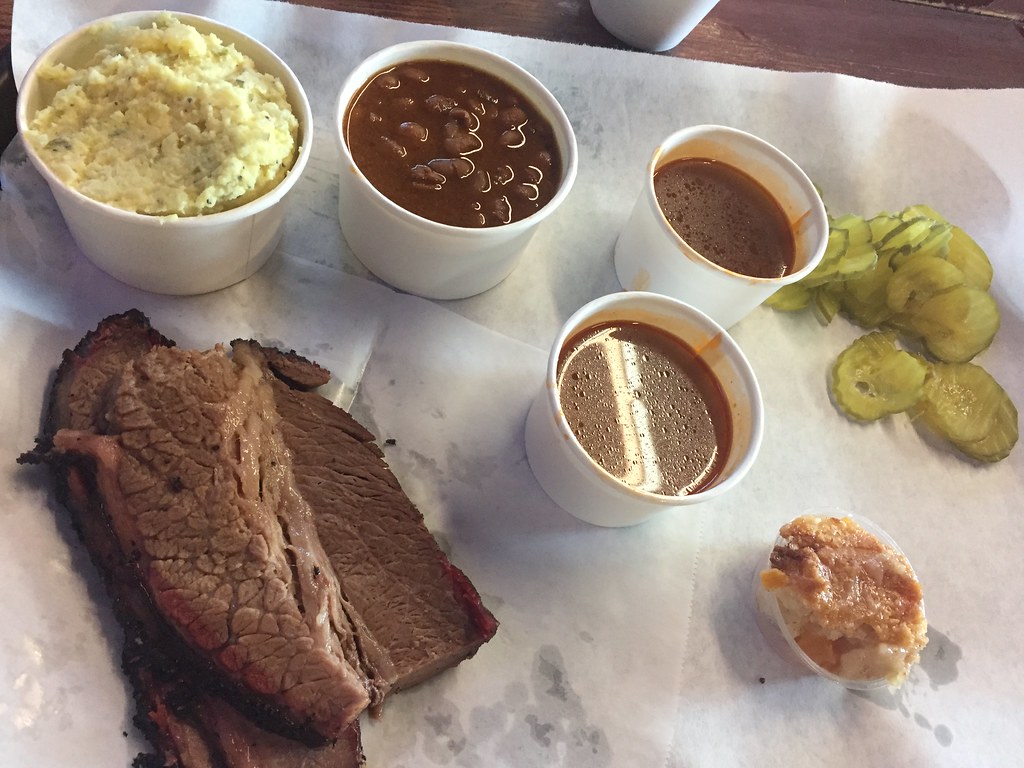 The brisket was fantastic, we loved the potato salad side, and they even gave us a little sample of their peach cobbler.  It was the perfect break in our drive; we had 3 more hours before hitting San Antonio.

Once in town, we checked into the Marriott Riverwalk where we had a nice view of the river and were able to drop off the rental car practically across the street. Our friend James had driven in from Austin to hang out with us for the weekend and we met him in our bar for a drink before heading out for the night. 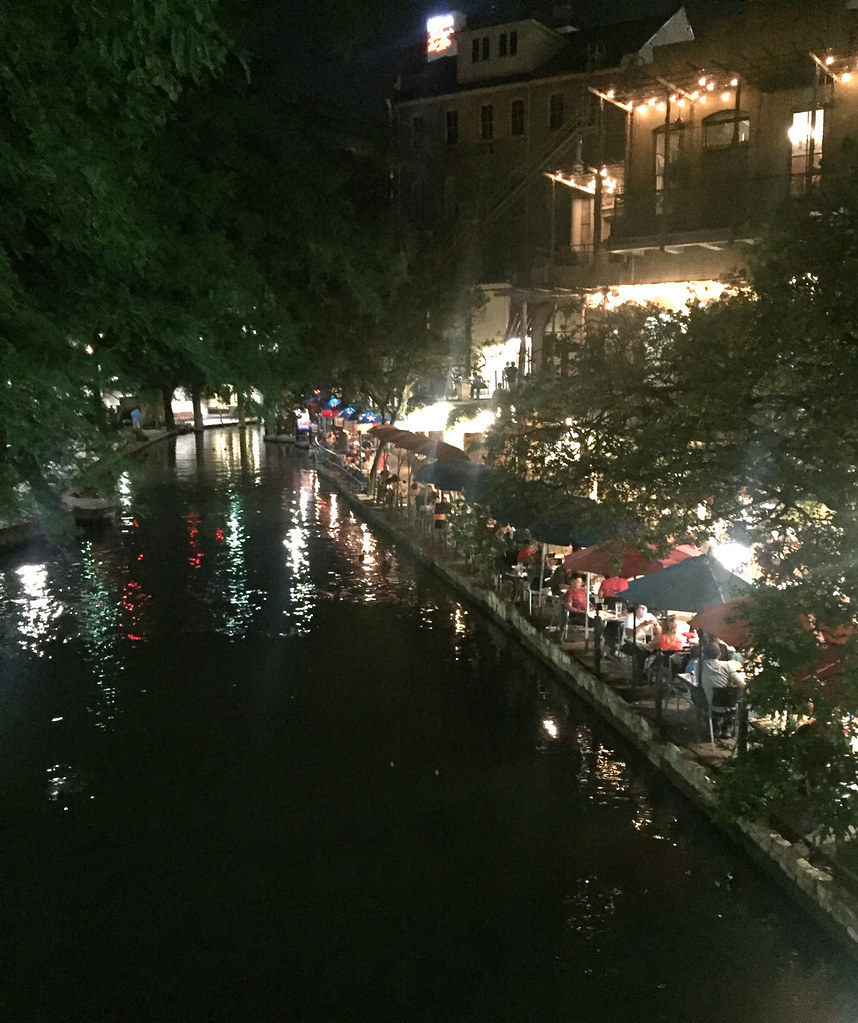 We followed the Riverwalk to Downstairs at the Esquire Tavern. This cocktail lounge is so pretty and slightly posh, with a fantastic higher-end liquor selection and lovely drinks. Add to that our awesome bartender and we ended up making a night of it! 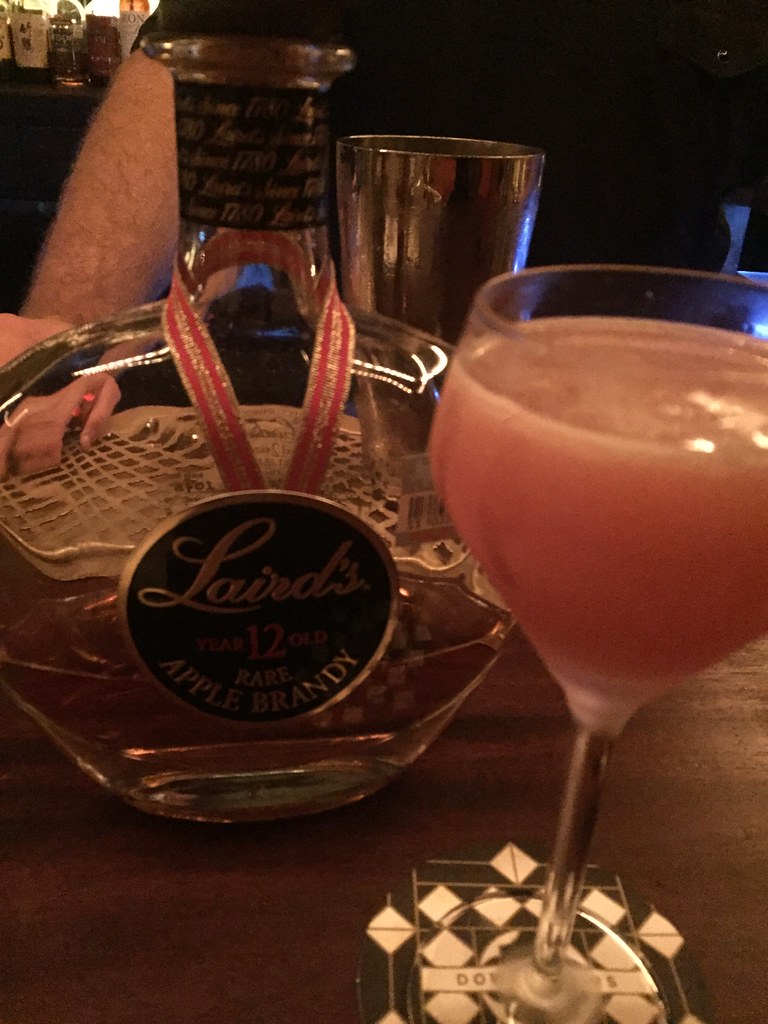 The next morning the three of us tried the city’s famous puffy tacos at The Blanco Cafe. I paired mine with a cheese enchilada. Perfect hangover food! 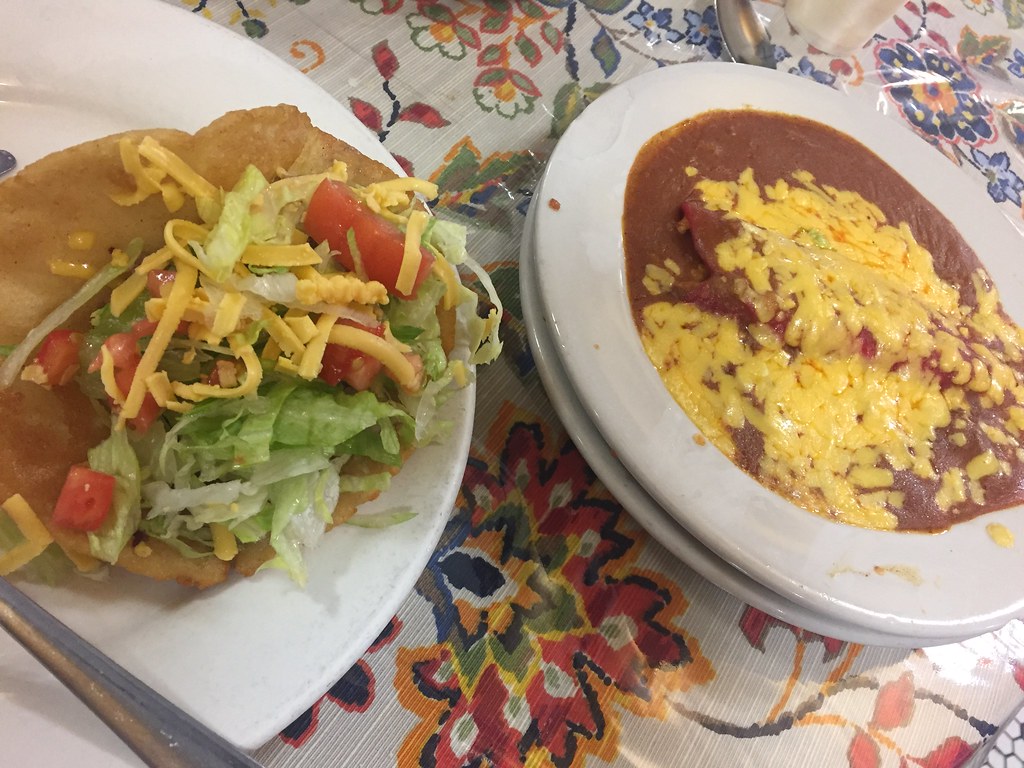 Forest and I then left to go tour The Alamo which was really fantastic! I loved going through the old buildings, learning about the original mission, and reading about the history of the site. The grounds were also super pretty! 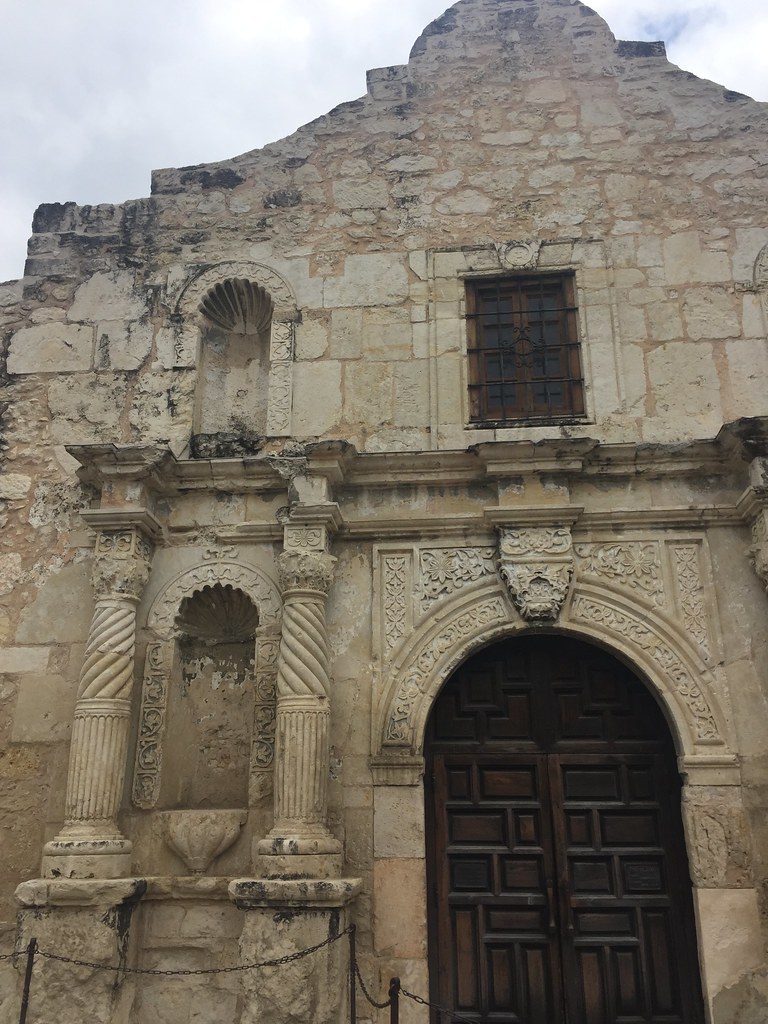 We decided the heat called for margaritas and chose to sit on the terrace at Rio Rio overlooking the Riverwalk and the riverboats cruising around. The Riverwalk is one of the most touristy things ever but it’s still fun and we got some good people watching it over a few rounds. 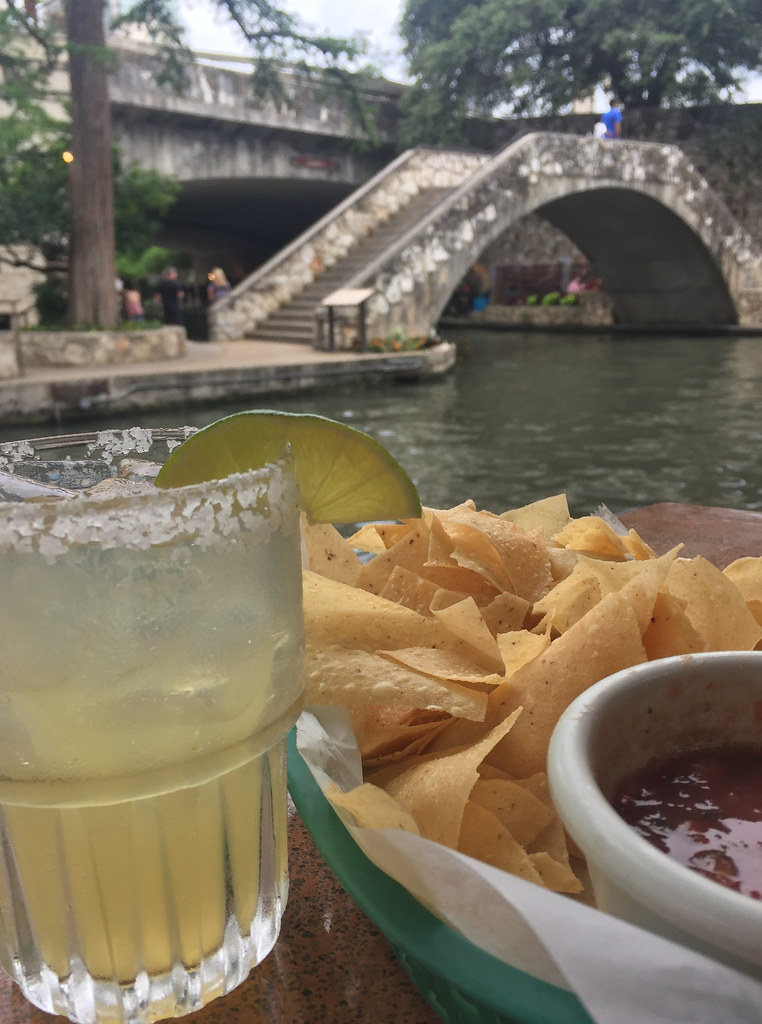 That evening we met up with James and checked out happy hour at The Last Word. The bar was pretty good, a tad on the loud side, but had decent Old Fashions, great HH prices, and interesting framed prints of various writers on the walls. 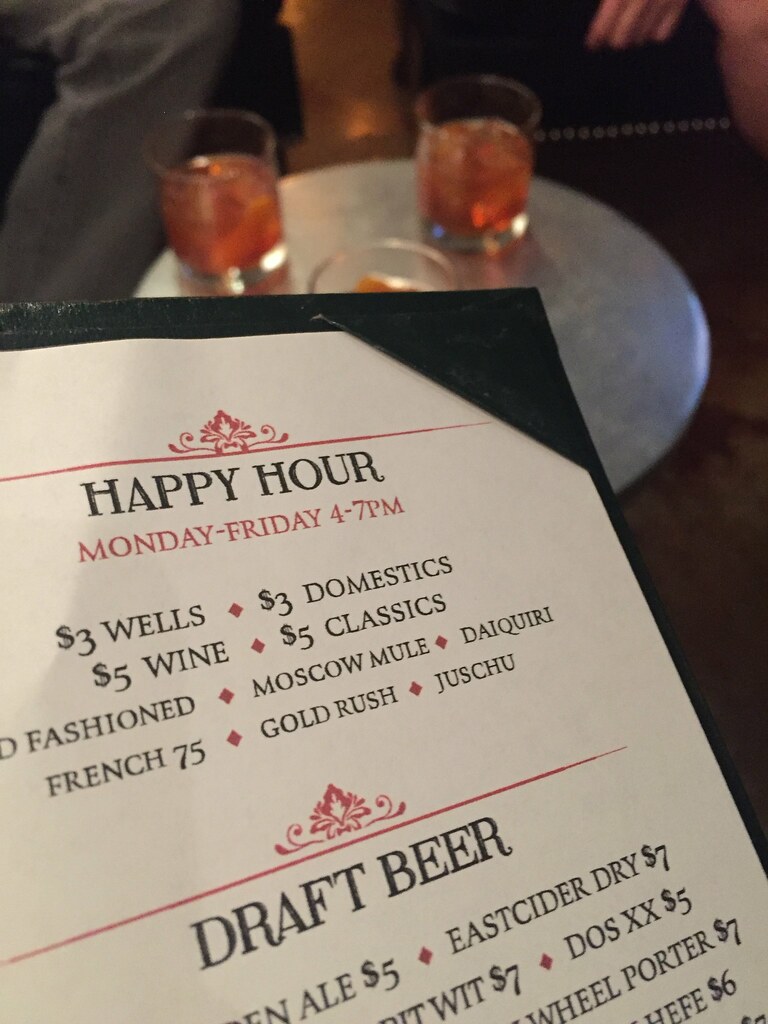 We went by Uber to the Hotel Emma, home of the old Pearl Brewery and converted into an absolutely gorgeous boutique hotel. After wandering the lobby we made our way into Sternewirth for cocktails. The bar still has some of the old tanks inside, now they are cool booths, as well as some of the mechanics from the brewery. 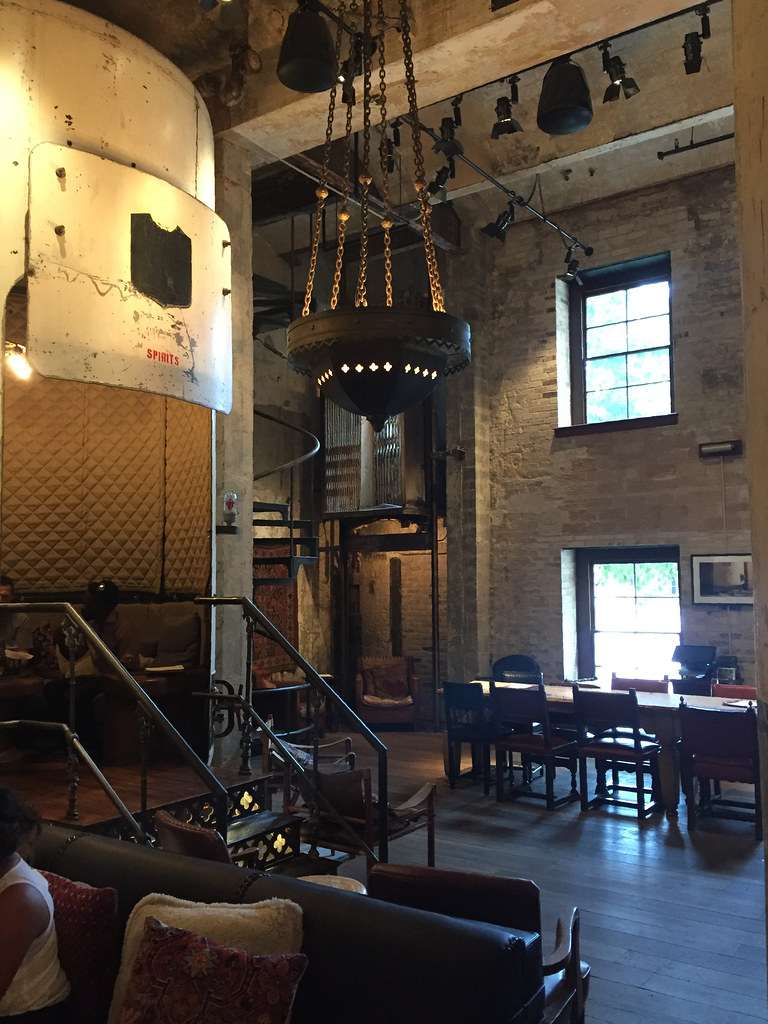 Our drinks were all good and the menu was nicely creative. All in all a good stop and I would absolutely try to stay at the hotel if I were in town again!

We had dinner reservations just across the parking lot at Nao, the CIA's restaurant in the Pearl Brewery complex. When we were there they offered either a 3 or 4-course prix fixe for $36 or $44 respectively. It’s a great price and while the meal was good, there was nothing really stand-out-ish about any of it.

Nightcaps at the Esquire Tavern, this time upstairs. The bar here looks more divey with large wood booths and a dim casual atmosphere than downstairs. But they still take care with their cocktails and they claim to be the oldest bar on the Riverwalk and the longest wood bartop in Texas. It's certainly a fun spot! 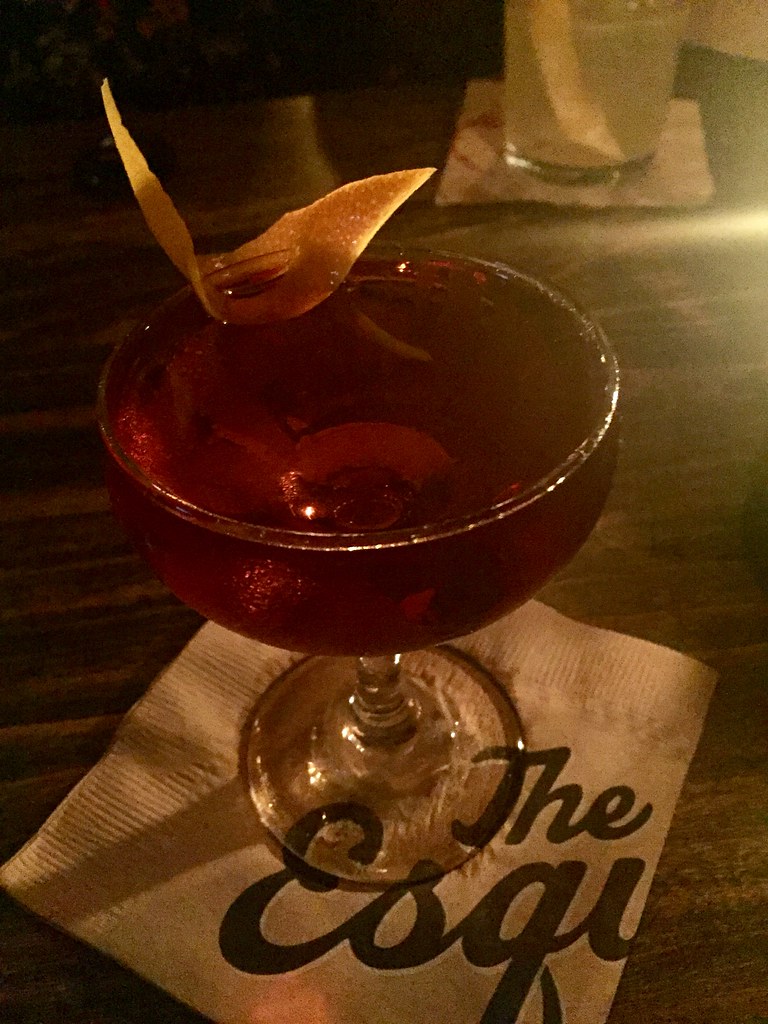 I slept in a bit and met up with James and Forest the next morning at the kitschy Tex-Mex Mi Tierra Cafe. From the minute you walk in your eyes are bombarded with all matter of crazy shit hanging from the ceiling and decorating the walls. It’s like Christmas exploded and it’s pretty fun. 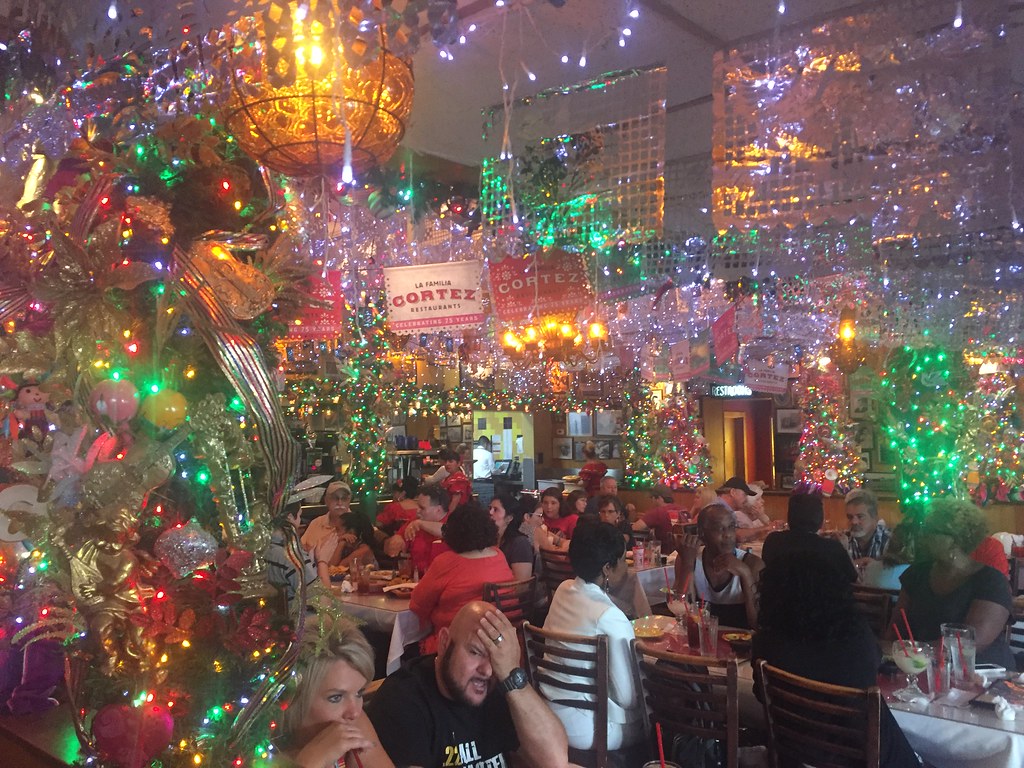 I ordered my now standard puffy taco and cheese enchilada which were fine. It’s not really about the food here, IMHO it’s all about the wacky ambiance.

San Antonio's Market Square is the largest Mexican market in the US and is about the size of 3-city blocks. We explored for a while, catching a folk dancing exhibit and browsing the crafty shops selling an assortment of stuff: day of the dead figurines, leather items, tourist t-shirts. 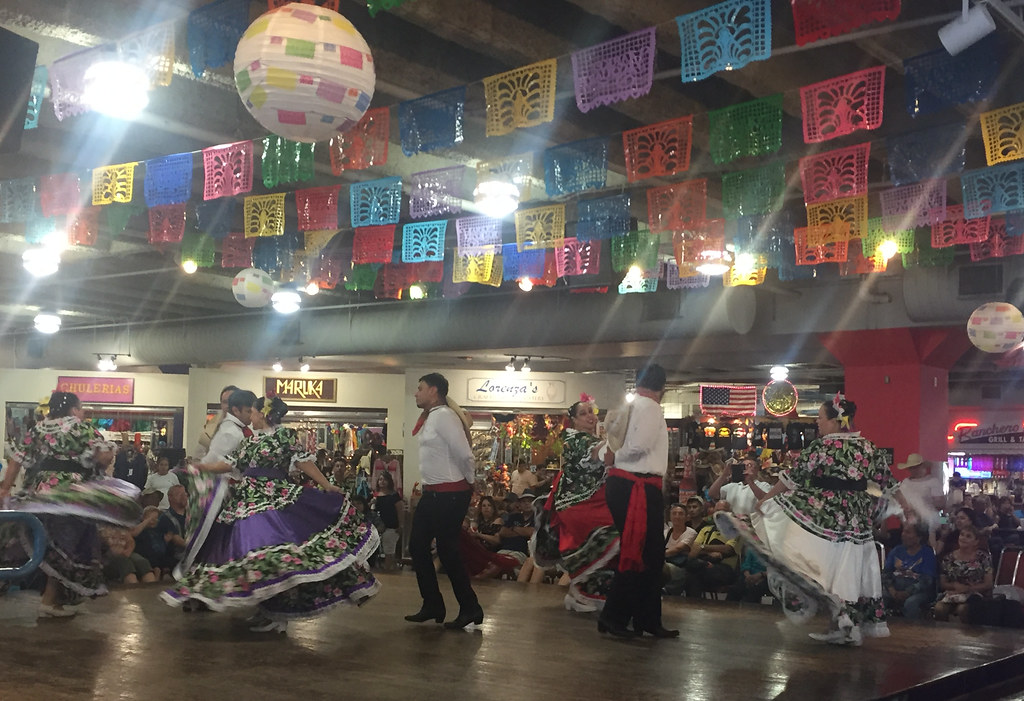 It was really hot so we decided to hit the air conditioning at the Esquire Tavern. We obviously really liked that place!

You can’t go to SA without taking a riverboat, well I couldn’t anyway, so we took one that does taxi stops along the river. We passed the touristy restaurants and bars that line the main part, sailed through the business district, went through a small lock a bit farther, and passed newer condo complexes as we neared the Pearl Brewery complex. 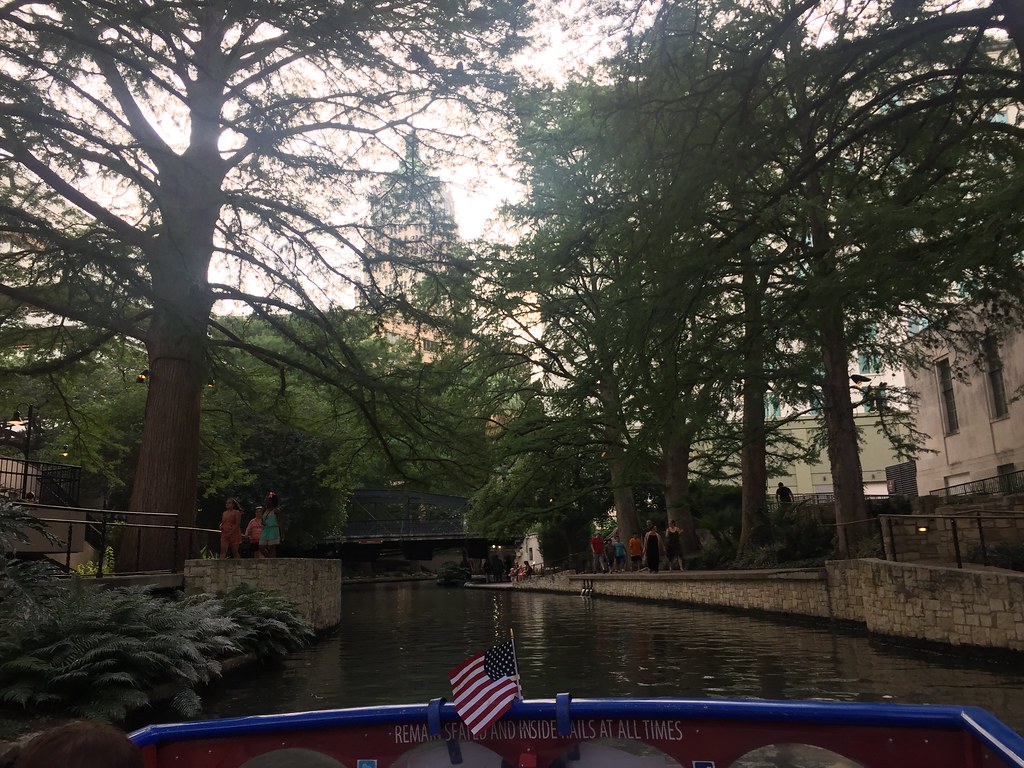 We had reservations at Cured which is in there also; it's building used to be the original brewery's administration building. 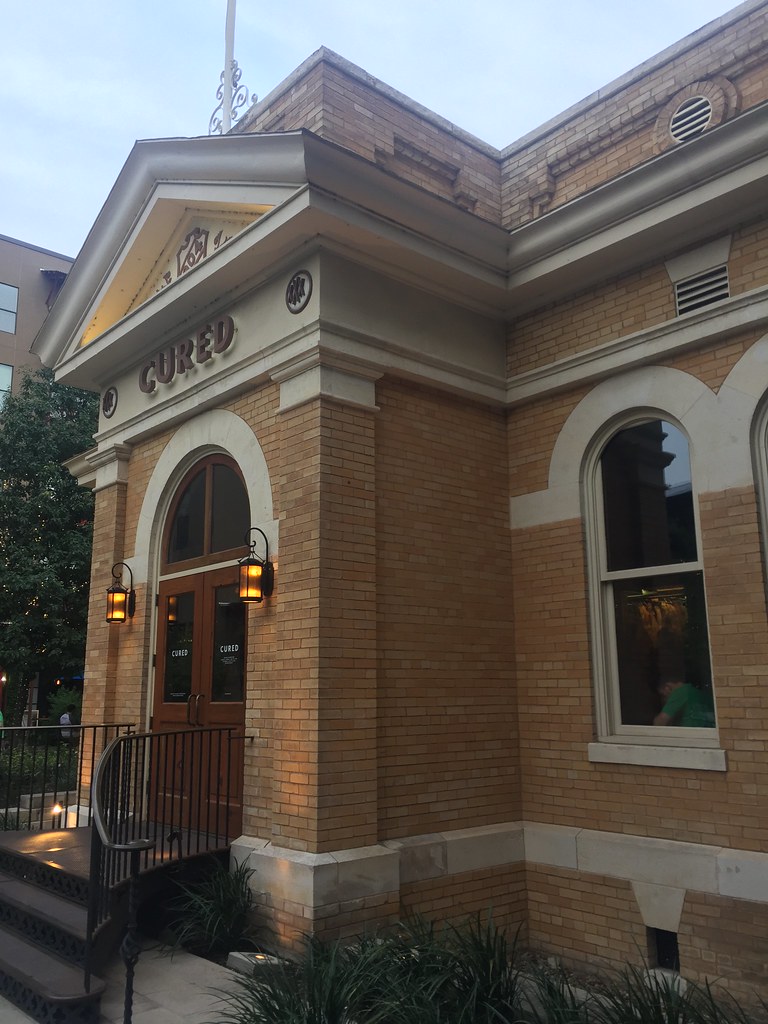 Our dinner here was great! Tasty drinks, delicious food, and a super cute environment. And lots of cured meats as the name implies. I’d go back here again for sure.

We left dinner and made it to the Main Plaza at the San Fernando Cathedral just in time for the Saga Light Show. The history of San Antonio is projected onto the building in a fantastic display of lights and music. This may have been my favorite thing that we did/saw! Very cool, do not miss IMHO. 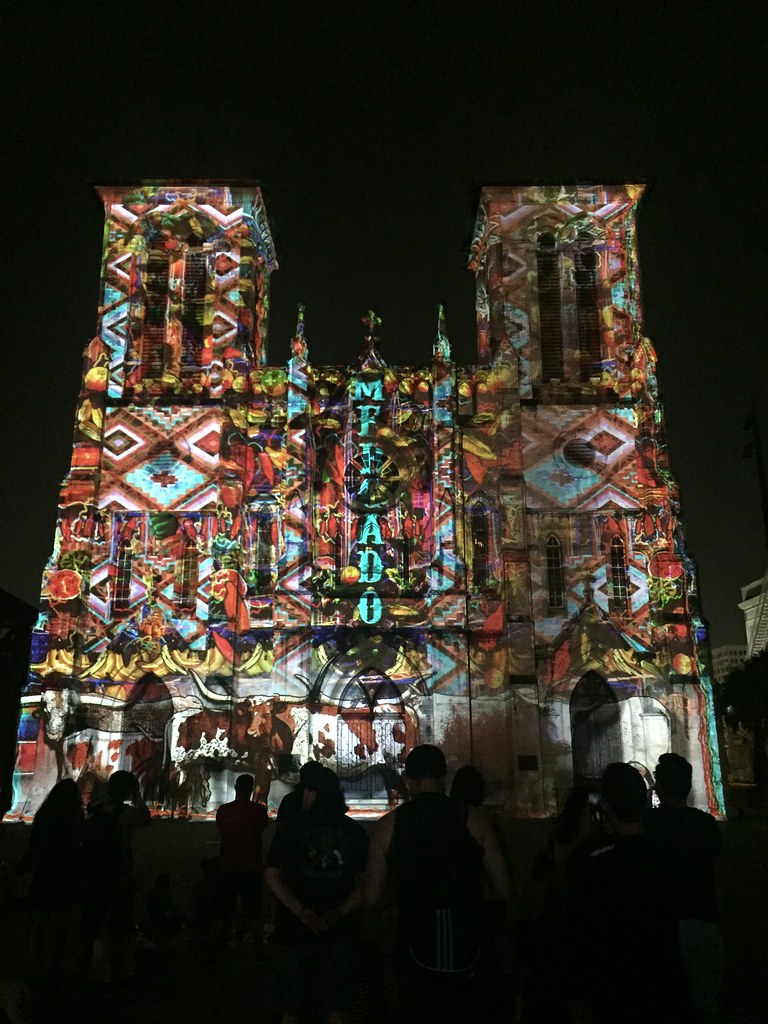 And my favorite bar that we visited was Juniper Tar, just a short walk from the plaza. It's a beautiful space and has an extensive menu of original and classic drinks, as well as some of the most friendly bartenders in town. Absolutely recommended! 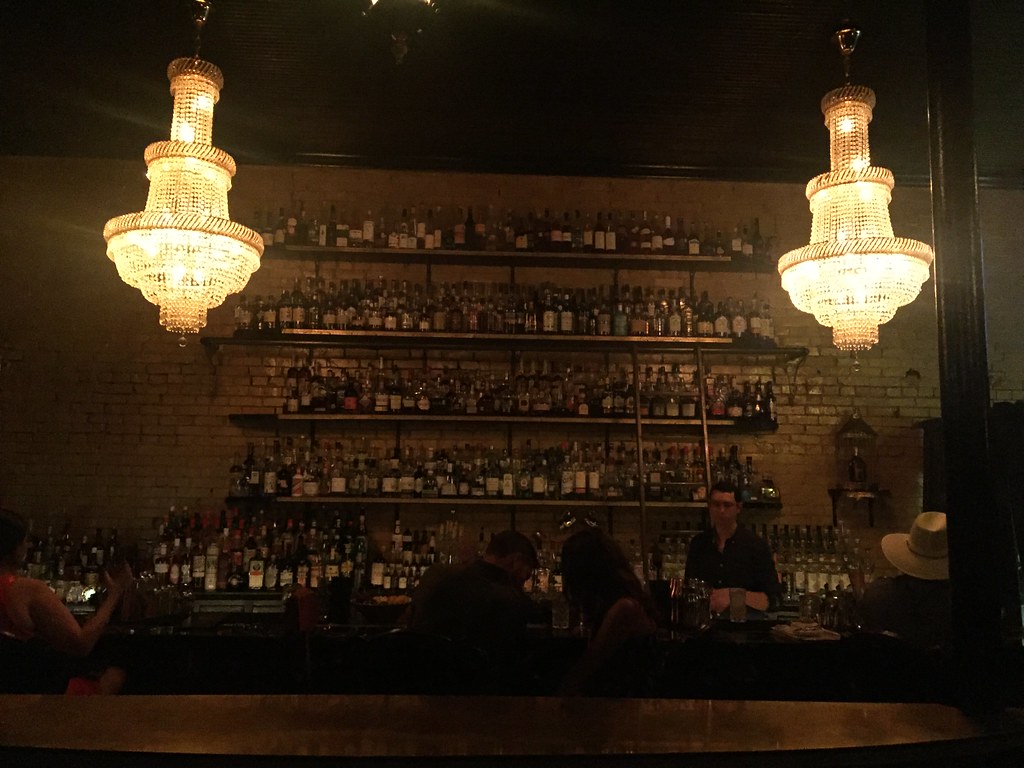 I'd never heard of ice houses before, but I read that in San Antonio these neighborhood gathering spots are still quite popular. Originating in the 1920's, they were not just a place to get ice but they also provided neighbors a central location to sit, have a beer, and catch up. Texans are quite sentimental about them so we started our Sunday with a few cold beers and some pub grub at The Friendly Spot in Southtown. 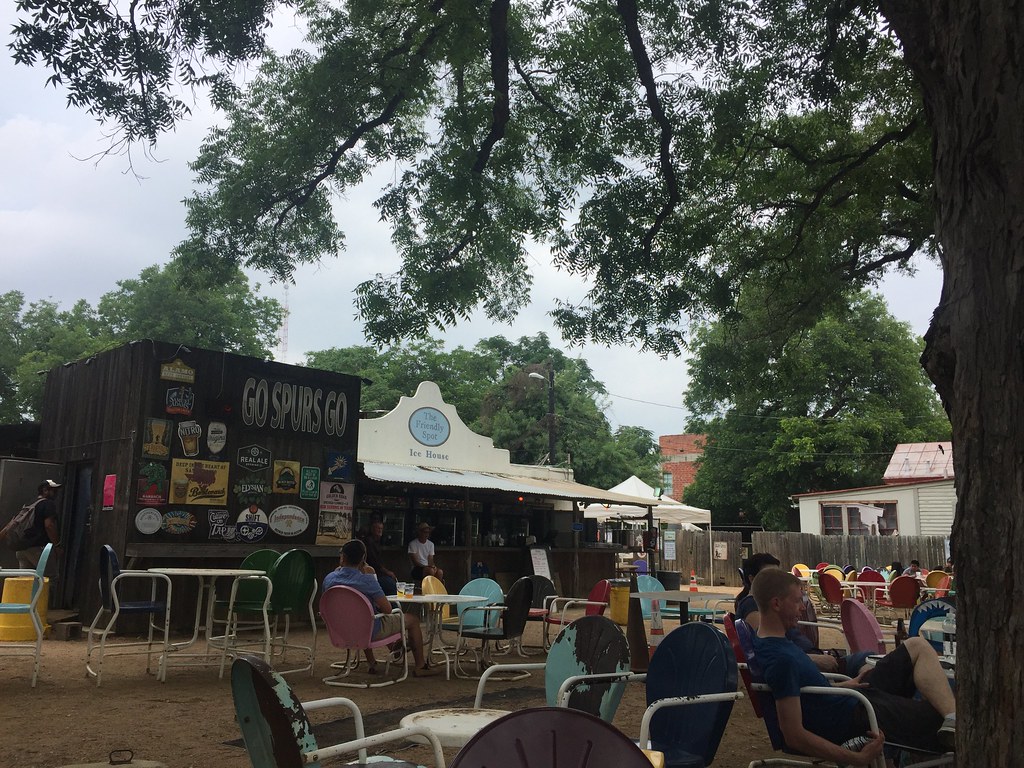 This was a fun little peek at the local side to San Antonio, especially welcome after a few days in the tourist area. And who doesn't like to hang out with friends drinking a few cold beers?

James drove us out to Mission San Jose after and we spent a bit of time wandering the grounds of this 250-year-old site. It’s very beautiful and interesting but it is a bit out of town so you kind of need a car for this (although maybe there are tours from the city?) 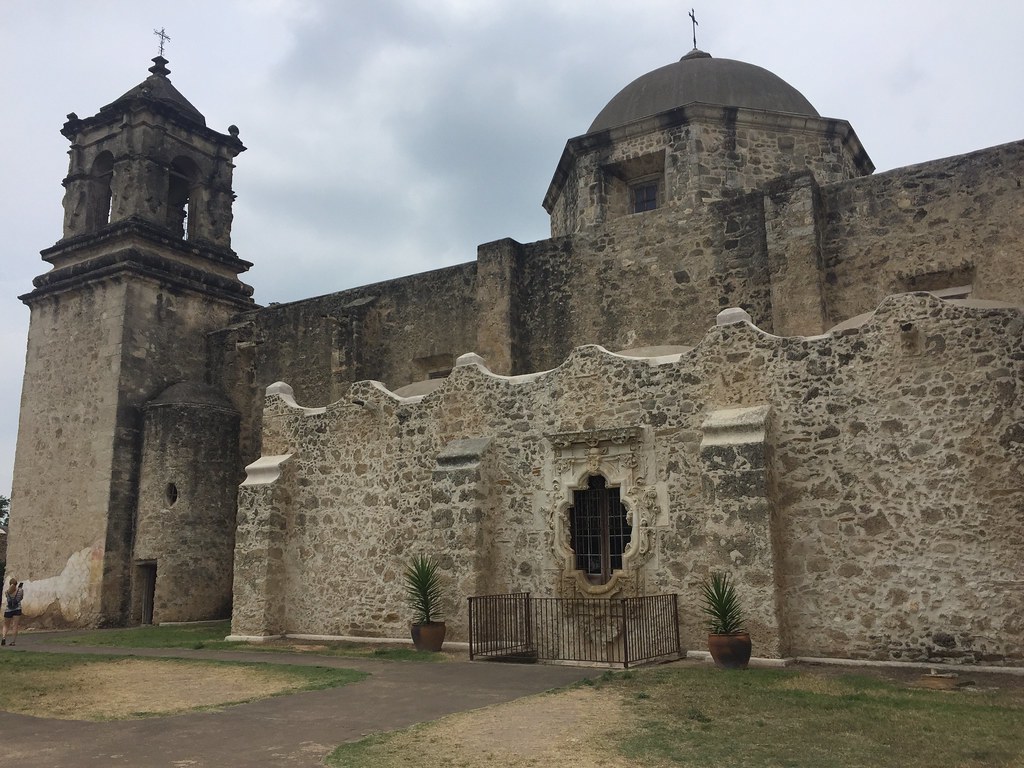 We killed the last bit of our time with a few day drinks at Paramour, a very hip rooftop bar. Uber-cool millennials, brightly colored chairs and couches, and funky art litter the space. It’s probably not my speed at night (the word pretentious and scene come to mind) but was fun and comfortable during the day. 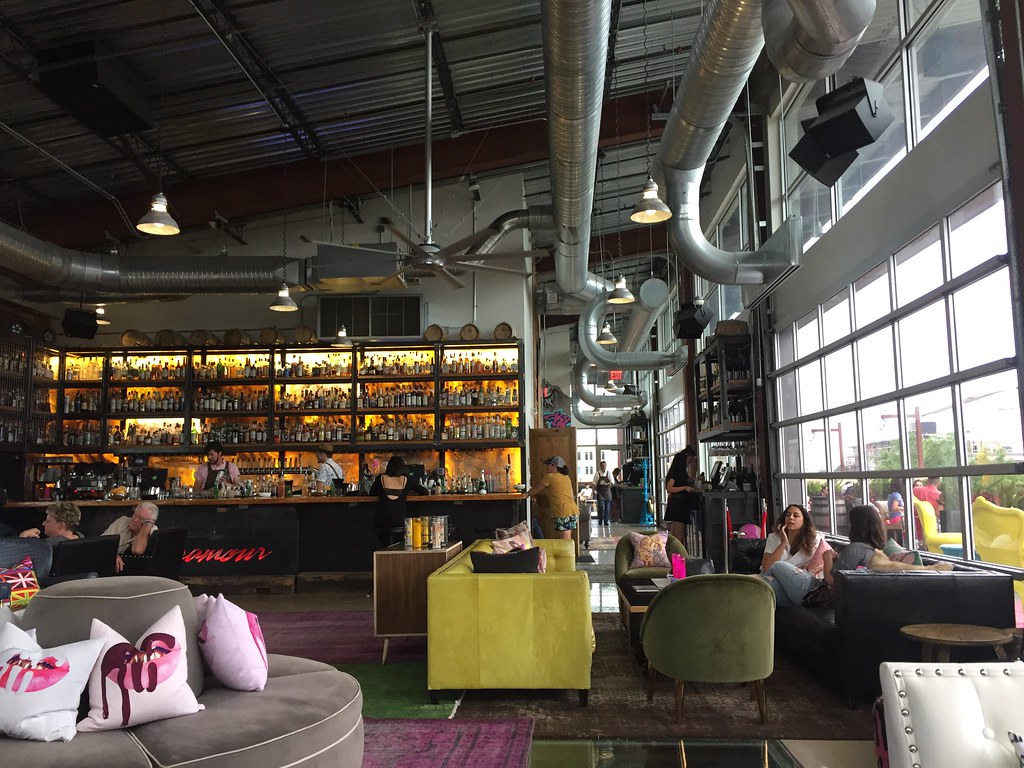 James dropped us at the airport on his way back to Austin, and after checking in for our respective flights Forest and I found a place for dinner before saying goodbye.

Right before leaving a massive storm rolled in, delaying my flight and canceling hers! Everything’s bigger in Texas! 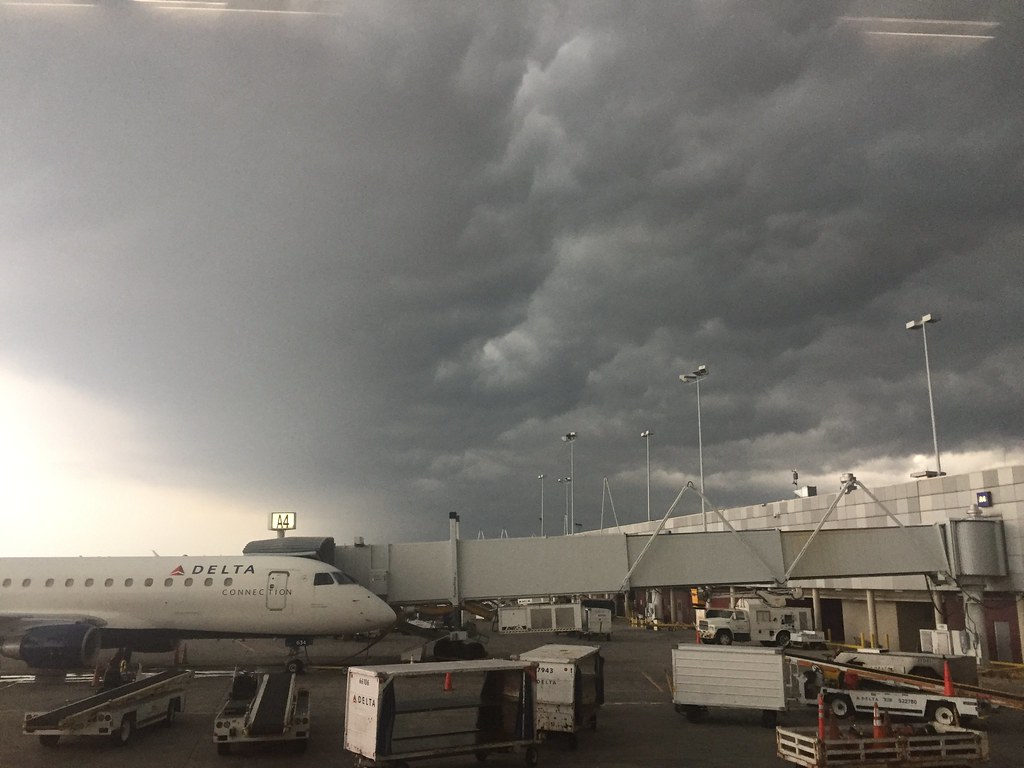 Prior post from this trip: 48 Hours in East Texas