It's A Jungle Out There

We left the cloud forest mid afternoon and headed to the jungles surrounding the Arenal Volcano. Even though Costa Rica is tiny it is a mess of mountains, volcanoes and in this case a big ole man made lake turning the relatively short 85 mile distance into a  4+ hour drive. Instead of one long car trip we chose a multi- transportation excursion that I so mysteriously love.

First we were picked up in a 4 wheel drive vehicle and for 1 1/2 hours drove past coffee plantations, up and over crazy steep mud roads, made a quick stop at the drivers' house (so he could grab a snack), and finally were deposited lakeside, the only thing we could see in either direction was a small coffee shack. 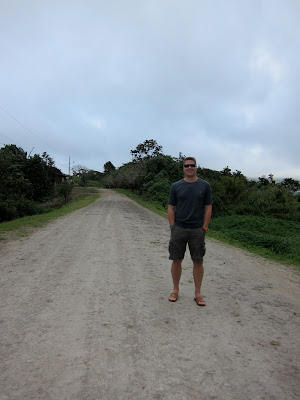 We watched the hummingbirds dart around while we waited and once a few more vans arrived with more passengers we boarded a boat and took off across the lake. It was cloudy and a tad stormy so we were not rewarded with views of the volcano as we had hoped, but it was still a pretty 40 minute ride. 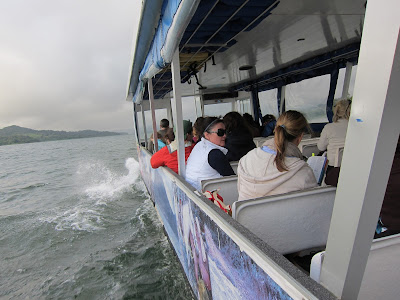 Once we landed on the opposite shore we were picked up in a van and taken to the Arenal Observation Lodge. It was about a 20 minute ride on a very bumpy dirt road and we ended up arriving after dark, always a surprise for the next morning! The other surprise, as we checked in, was that we were told that our rooms in the Casona was 500 meters downhill from the main lodge. Did I mention that it was dark? And that we were in a jungle? Luckily one of their crew members had just dropped some guests off from a day trip and offered us and our luggage a ride down. He even waited for Dayne to grab a bucket of ice, it was past happy hour after all! 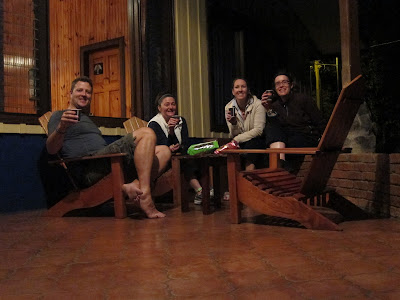 The Casona was a large building with 5 rooms and 2 shared bathrooms. It also had a great big outdoor porch which was perfect for relaxing. We did have quite a hike up to the restaurant for dinner that night (and each morning for breakfast) but the views of the volcano and the grounds were lovely.

The next morning after breakfast we were picked up for a full day of excursions. We scored by having just one other couple with us and also with our super knowledgeable and passionate guide Marcos! For our first adventure of the day we headed to Arenal Hanging Bridges. But before we even got into the reserve Marcos spotted Howler Monkeys so we stopped on the road and watched this momma and her baby hang around! 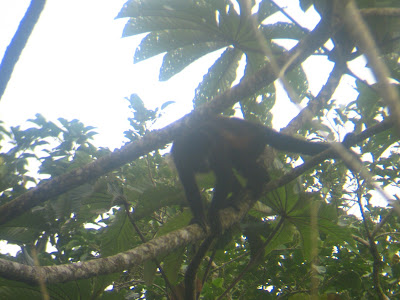 Shortly after that we were queuing up to pass over the first bridge that led into the park. There were huge parrots right by the parking lot! 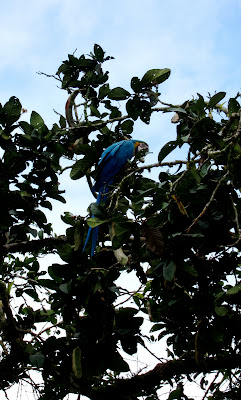 This was the beginning of 3 hours of Marcos spotting an incredible amount of wildlife, birds and flowers. The jungle was amazing, it was hot and steamy just like you think of. The bridges were all lengths and heights and even though there was quite a line up when we first entered we soon were on our own for much of the morning.
We spotted Helmet Iguanas, an Eyelash Viper, a Tarantula, lots of birds like Macaws, Parrots, Hummingbirds, Motmots, Vultures, Woodcreepers, Warblers, other various snakes and lizards. And these crazy Leafcutter Ants which are quite amazing to watch!

The variety of plants, trees and flowers was stunning! The hike covered paths and 16 hanging bridges including this one that was over 70 feet up! 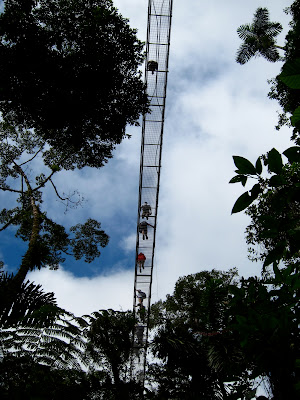 We finished our hike and piled into the van to head to our next destination- La Fortuna Waterfall. Again, beautiful lush surroundings and as we started down the 500 steps to the bottom we immediately spotted a tree with about 5 Toucans in it! 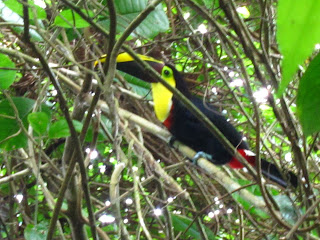 We hiked down to the gorgeous falls and relaxed by the banks, being misted with water for a while before heading back up... 500 steps! 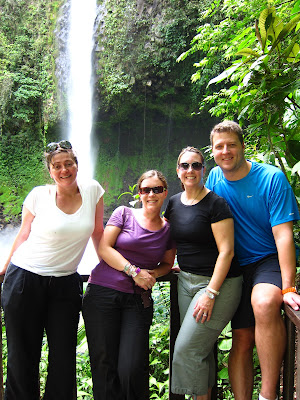 After a wonderful lunch at Don Rufino in La Fortuna we set out again, this time with an additional 4 adults and 2 kids (groan). We headed to the slopes of Arenal Volcano to walk along the lava flows. Marcos is studying to be a vulcanologist so along the way we learned about the eruption of Arenal and witnessed the regrowth of sugar cane and other plants. We spotted a very rare orchid that only blooms once a year for 24 hours and another huge crazy spider! 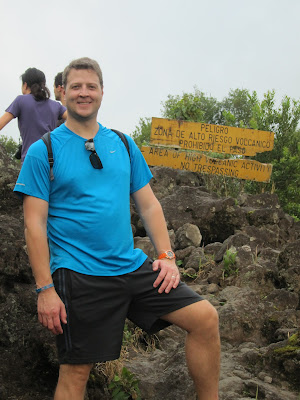 Our final treat of the day (now evening) was a trip to The Springs (fans of the show The Bachelor might recognize this as the hotel/hot springs featured on the show). With all that volcanic activity hot springs are a big thing and it was just the thing we needed after a day trekking through jungles and volcanoes. 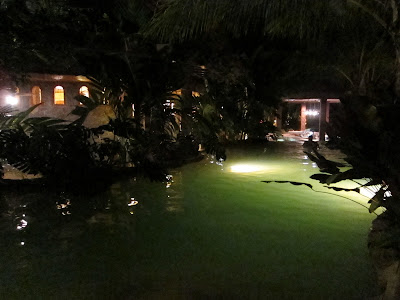 With over 35 various sized hot pools we had no problem finding one all to ourselves. We relaxed in the hot water, full of healing minerals, with guara sours! We only saw The Springs at night but it looked really nice and was on a huge estate. After an hour or so of soaking we had dinner at their buffet (this was all included in our full day booking) outside on a pretty terrace. When Marcos came to pick us up we invited him to share a bottle of wine with us and got a chance to hear more of his amazing knowledge of wildlife and the area. He knows 150 bird calls and can spot over 500 birds. Throughout the day he recorded everything we saw in his guides, next to their photo with notes about the area we were in. There is no way we would have seen everything that we did without him and I can't emphasize enough the need to hire a guide while hiking in Costa Rica. People would come up on us and see us looking at something but without a trained eye telling you exactly where to look and what to look for everything is camouflaged!

Our long day was finished up with nightcaps on our porch (after we finagled a ride to get ice at the bar and then a drop off back at the Casona from Marcos)! 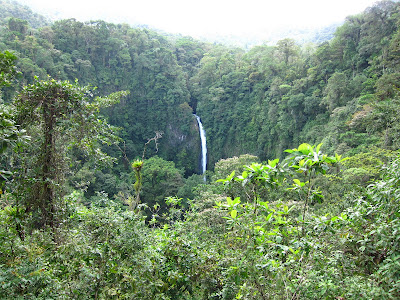